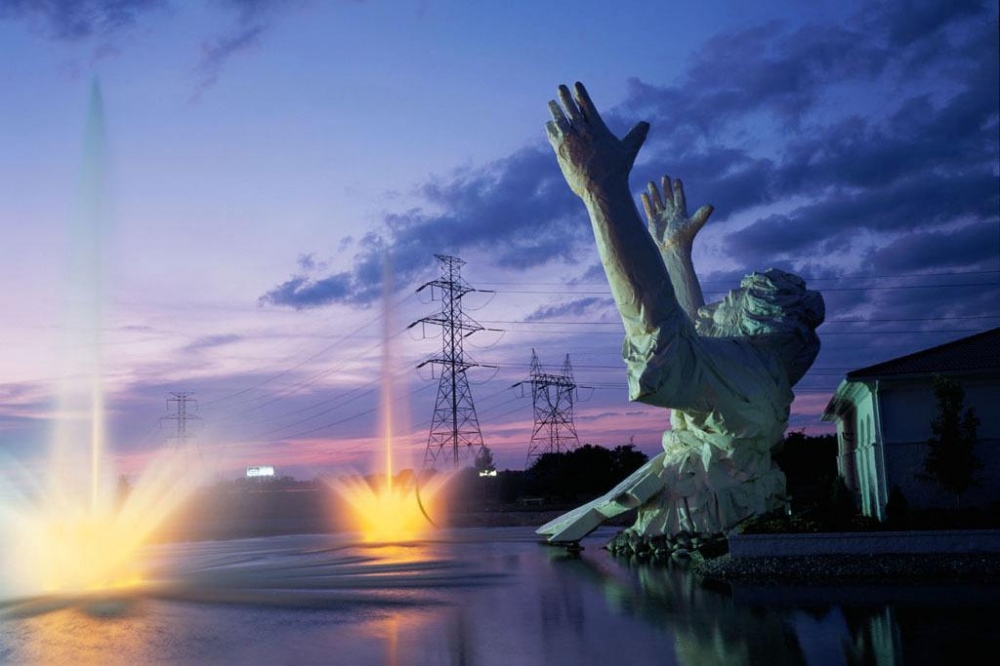 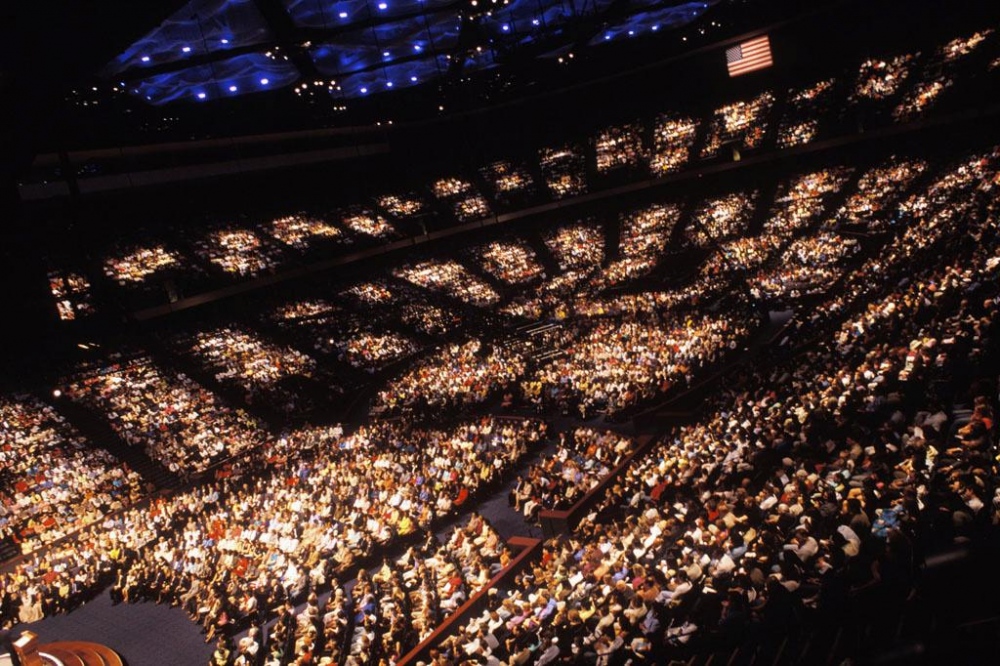 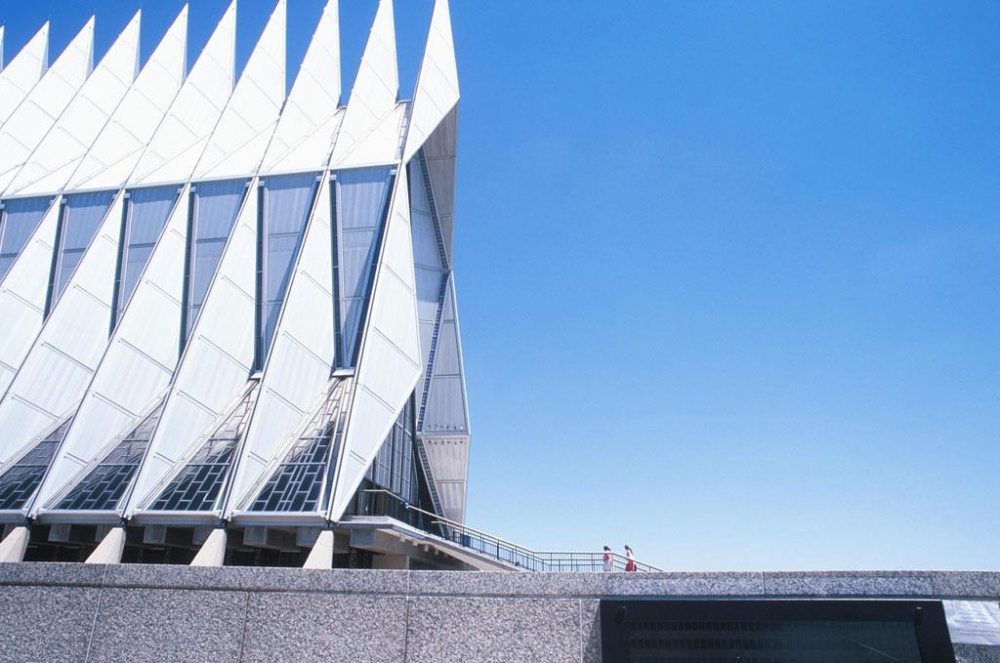 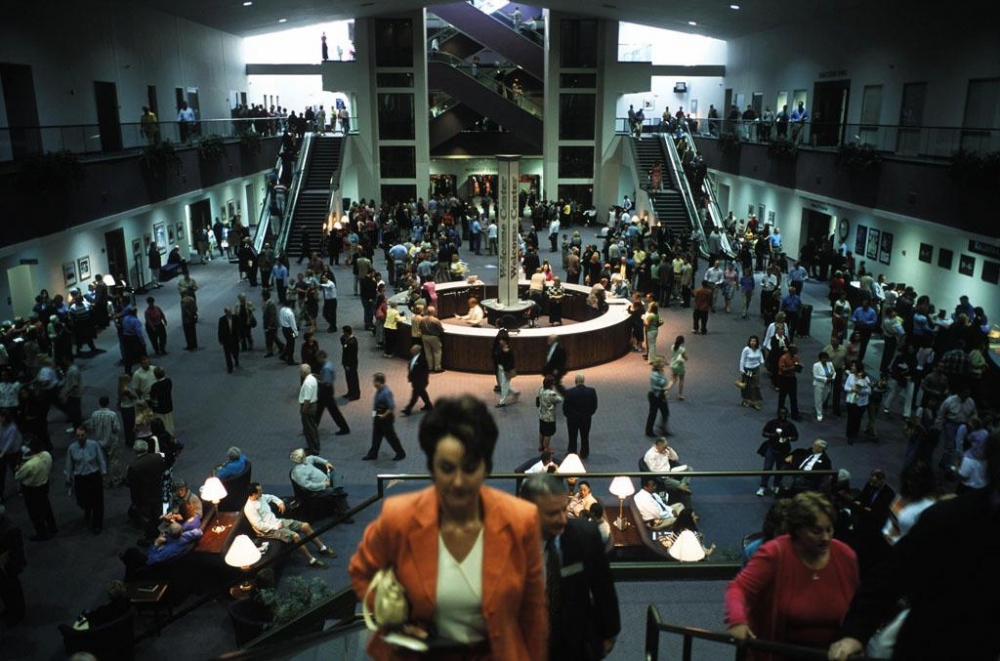 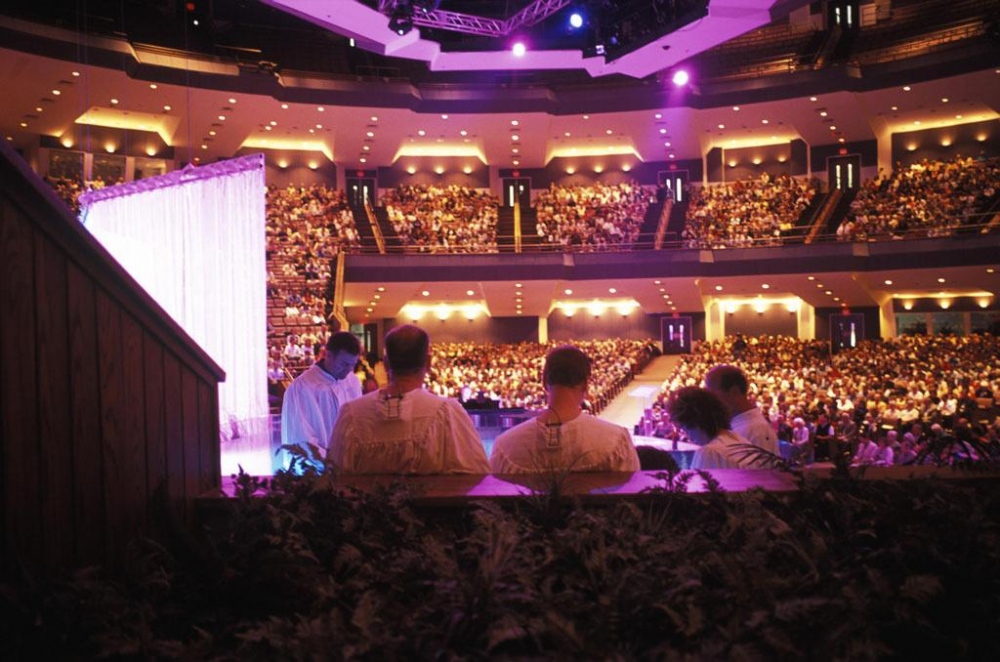 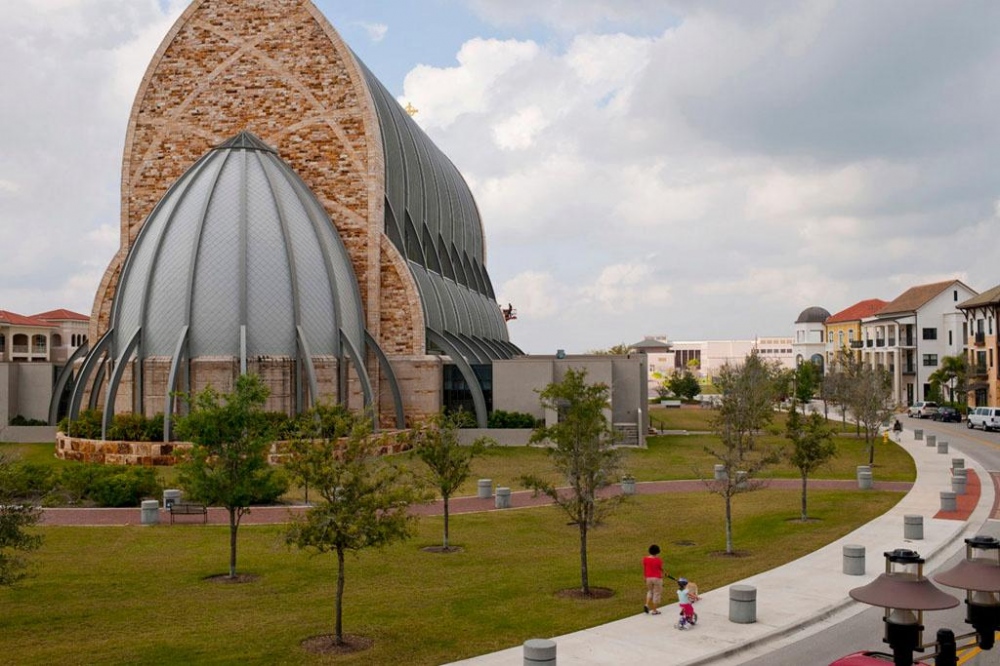 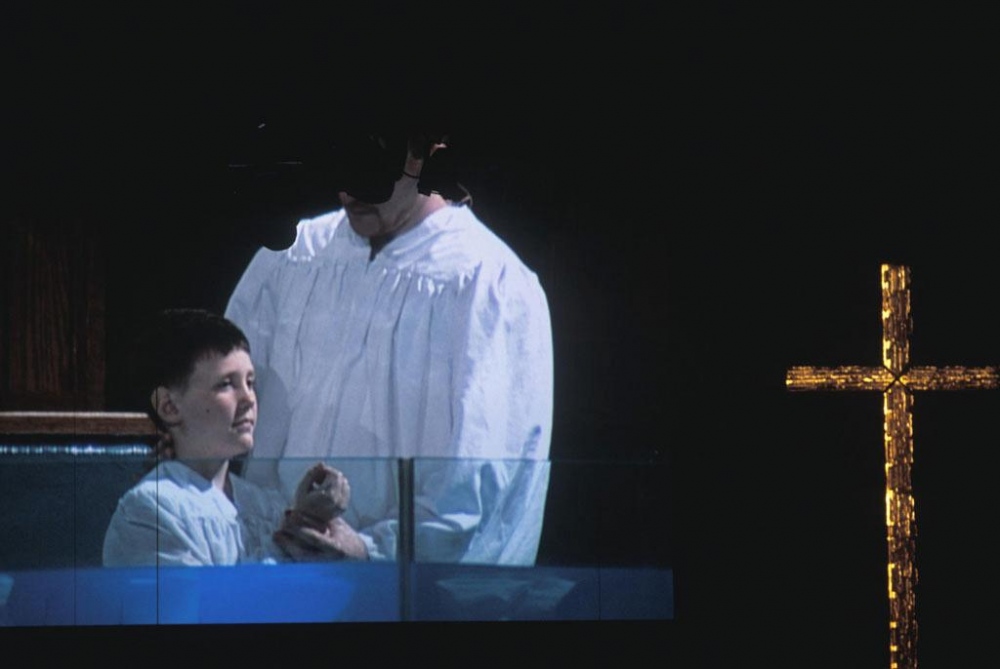 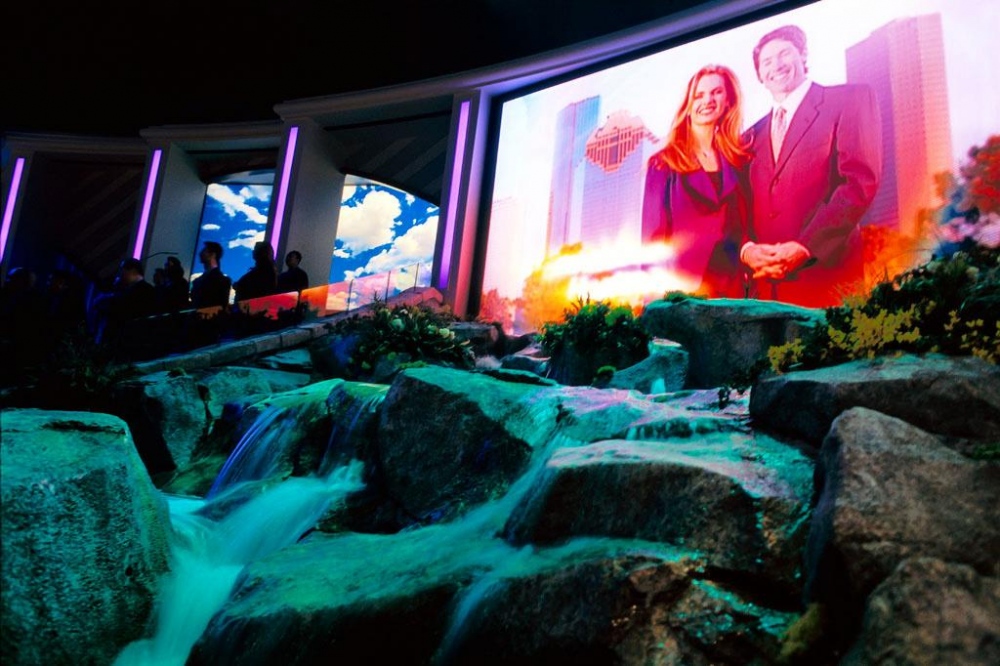 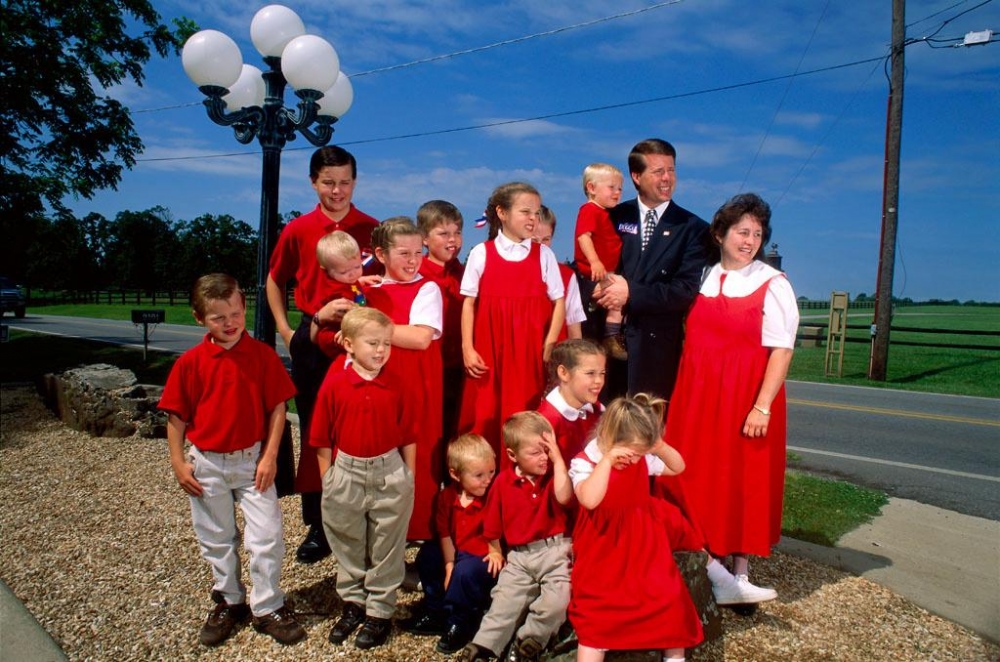 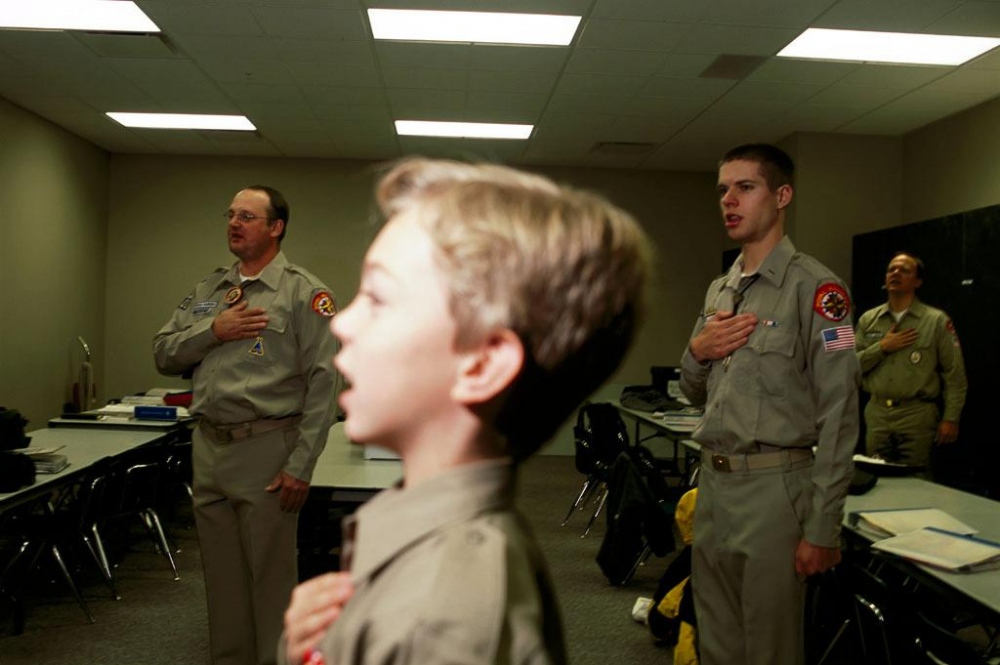 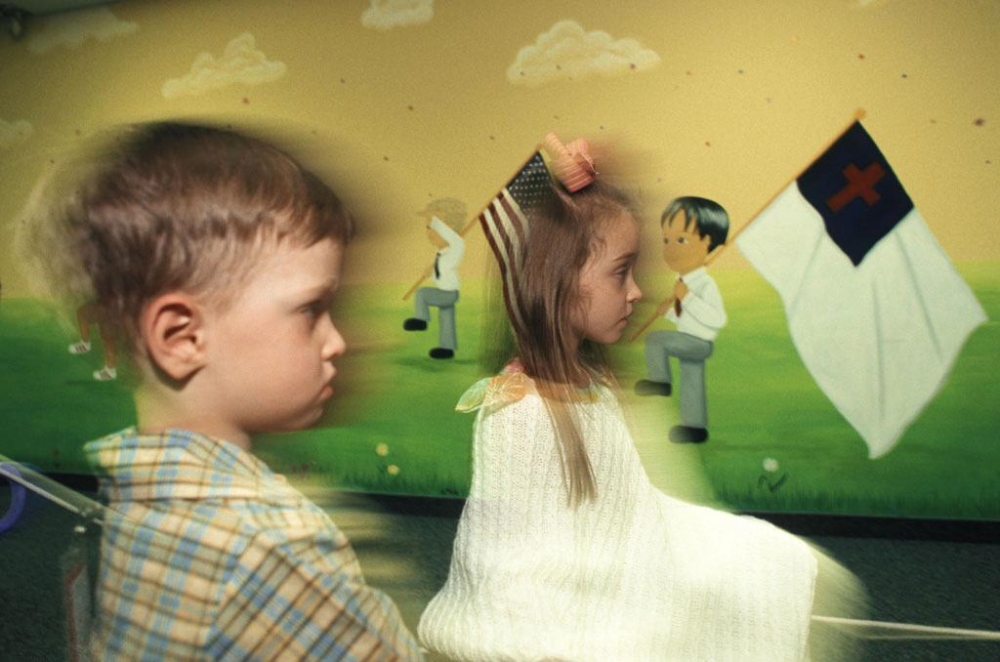 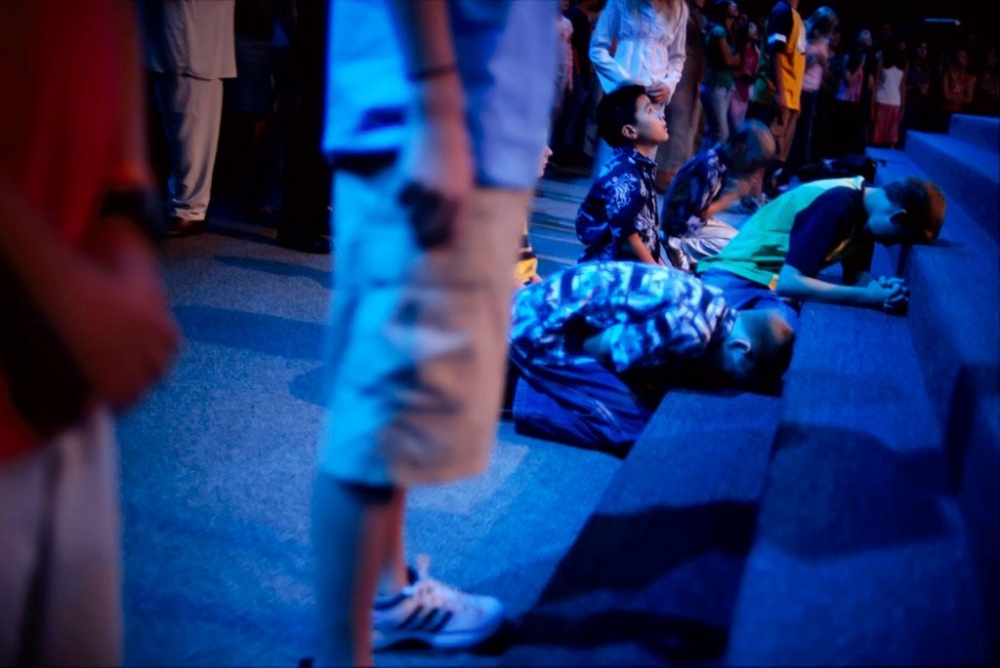 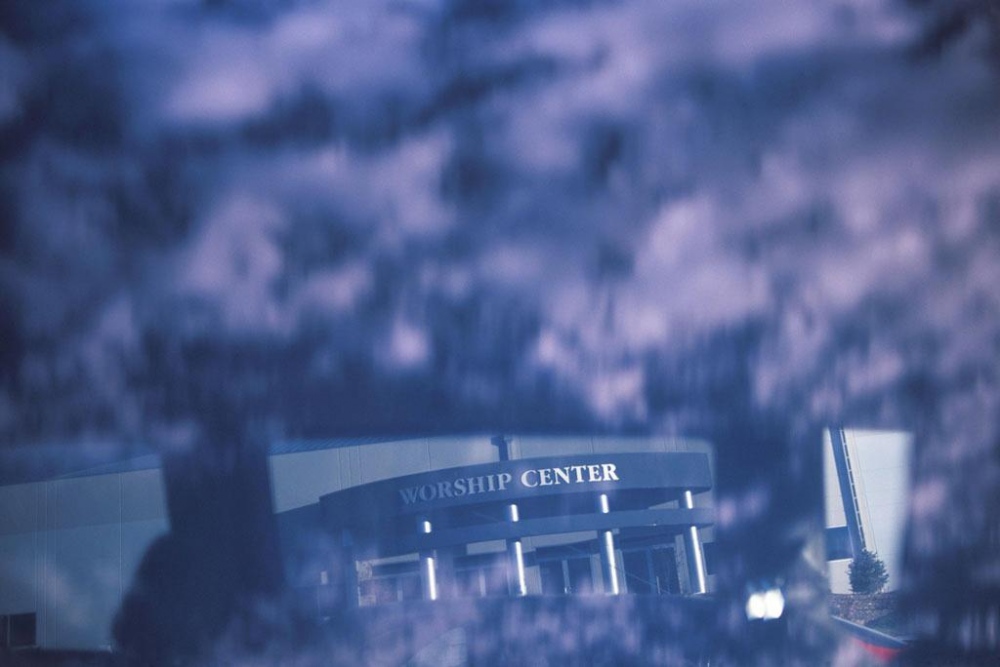 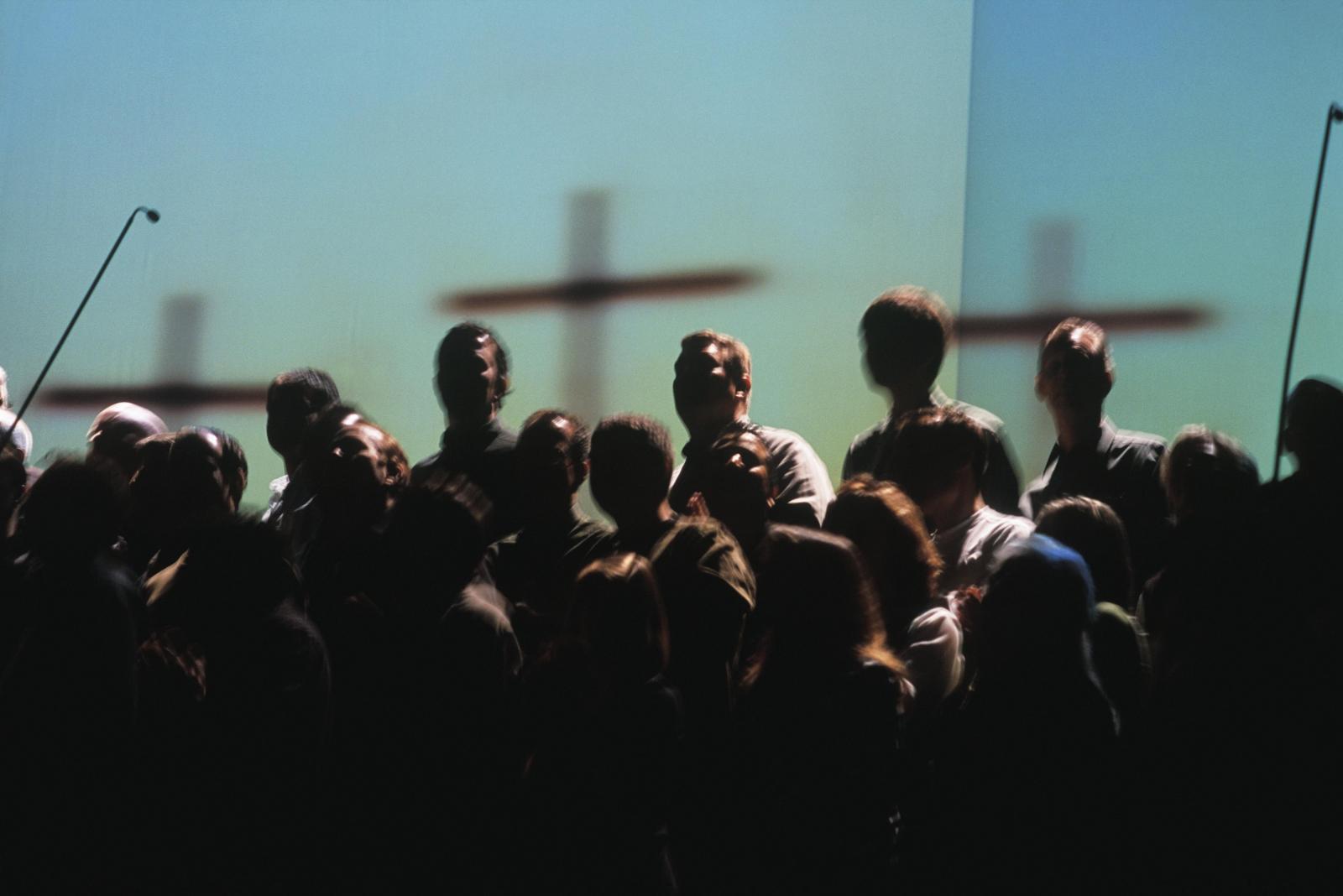 14 of 15 © 2022 Nina Berman
Sunday prayer service inside the New Life sancturary. Young people are often closest to the stage where they drop on the stairs in intense prayer. 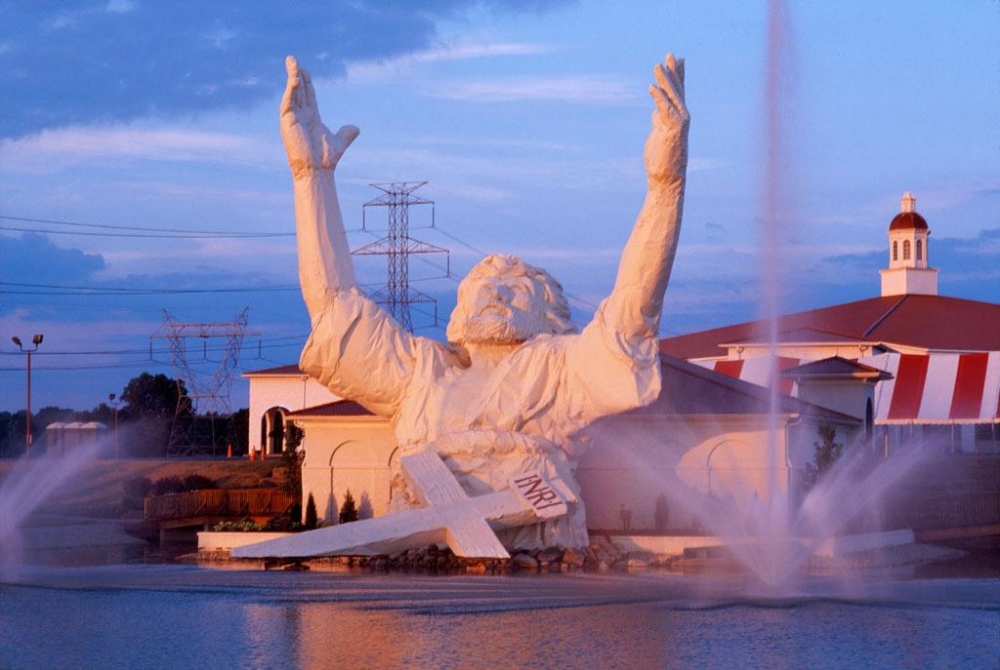 The traffic starts building by 8am, an orderly, mile-long procession of SUVs,
minivans and American family cars, snaking their way into vast parking lots waved on by
county sheriffs and security guards hired for the occasion. School buses ferry those from the remote edges of
lots to the doors of the $78 million structure shrouded in dark glass and adorned with huge vertical columns
befitting a corporate headquarters
.
A small metal cross, barely visible on the Center’s roof, seems an afterthought,
A detail dropped in at the last moment, perhaps overlooked in the original
architectural design. Ten thousand people arrive for the early Sunday morning service at Southeast
Christian church, a climate-controlled,escalator, elevator, gymnasium- equipped
Megachurch, rising off the highway in the Louisville, Kentucky exurbs.
With a total membership of almost 25,000,  SECC is one of the largest megachurches
In America and part of a frenzied national
trend to supersize soul saving.
About 1000 megachurches, defined as a church that
draws more than 2,500 congregants a week, are doing business in the USA.
This is triple the number from 1990. Some,  like SECC, are so large they are now called Giga Churches.
All across the country, especially in the swath of southern, western and mainly
red states, the megachurch beckons, transforming empty tracks of land
Into the equivalent of christian town malls offering such non-traditional church services as
health clubs, schools, hotels, job placement facilities, and even Macdonald’s and Starbucks franchises.
Entire industries have been created to design, build, and supply these churches.
think tanks exist to plot their rise. Llghting and rigging companies are
booming to supply the popular talking wall video screens and cat walks. Christian
bands perform U2 style music beneath strobe lights and fog machines. And
publishing companies package biblezines that are christian magazines for teens.
“it’s a universe where everything from the temperature to the theology is safely
Controlled,” Barnard College religion Professor. Dr. Randall Ballmer told the
Washington Times. “They don’t have to worry about finding schools, social networks or a place to eat.
It’s all prepackaged.”
The message booming from these supersized sanctuaries is a mix of prosperity
through prayer tinged with radical right wing social politics. A healthy dose of
Christian persecution is thrown in so that a visitor attending a typical megachurch
sermon would find that the world today is a place where christians are brutally and
continually oppressed and to survive, they must fight back.
It was in these megachurches that George Bush won his elections.
Supported by pastors who preached a daily drumbeat of invective against homosexuals,
abortionists and liberals, the congregants rallied to the republican ticket.
Every two days, a new megachurch emerges in America.
Nina Berman 2005

Enemy of the People

Triumph of the Shill -NB1

When The Jets Fly