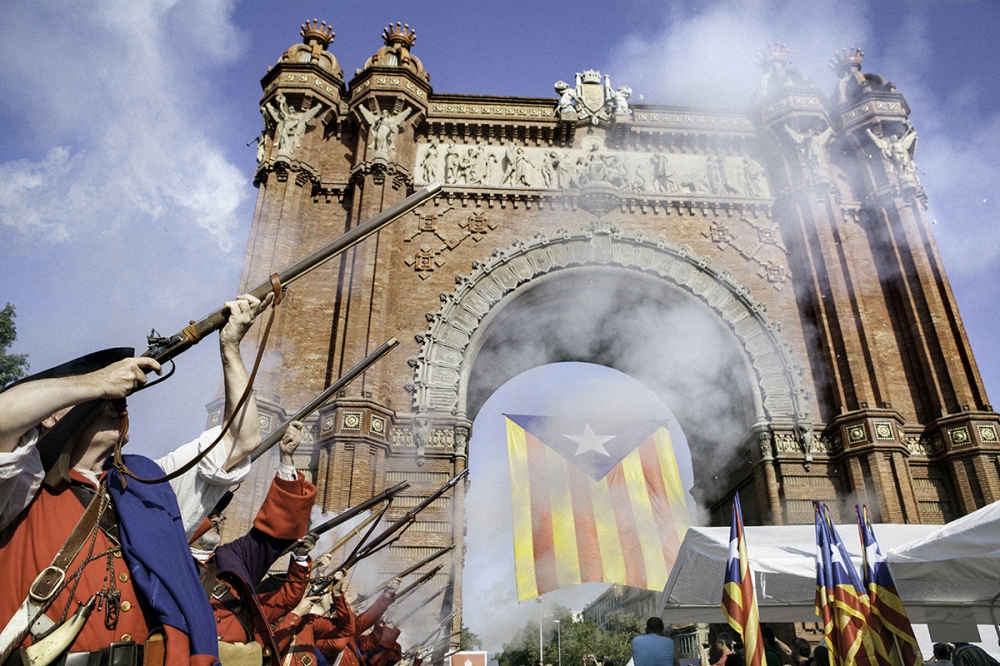 A group of 1714 reenactors from the association "Miquelets de Catalunya" shoot their guns in front of Arc de Triomf monument in Barcelona, during official acts of 11th of september, the National Day of Catalonia. Reenactors commemorate the tercentenary of the lost of Barcelona in Succession war in 1714. 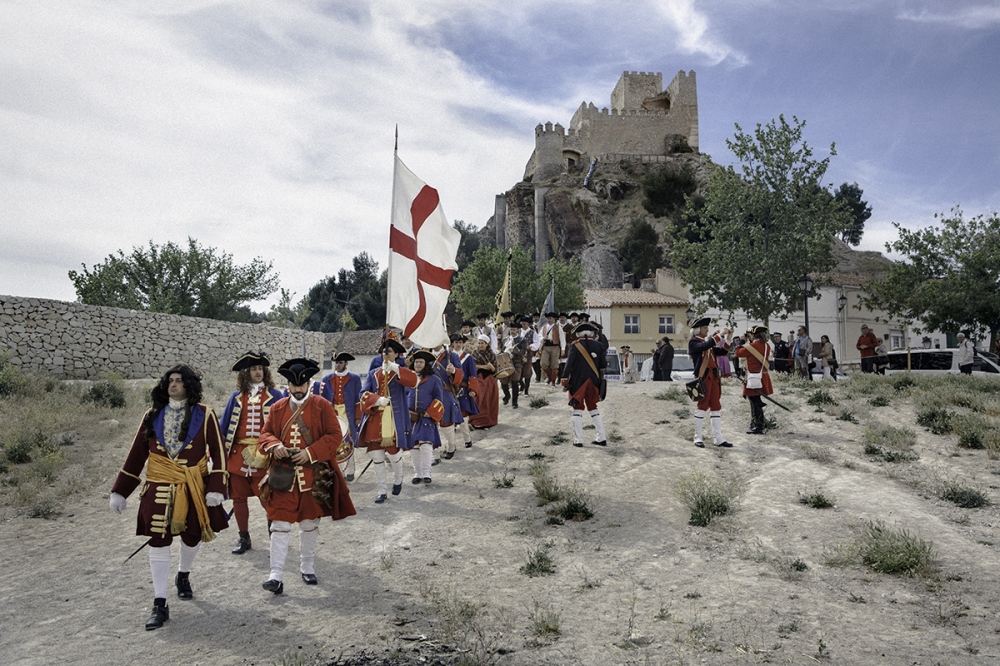 Miquelets de Catalunya, the reenactment association representing the Catalan army of Succession War, march during the reenactment of Almansa's 1017 battle, in Almansa (Spain). 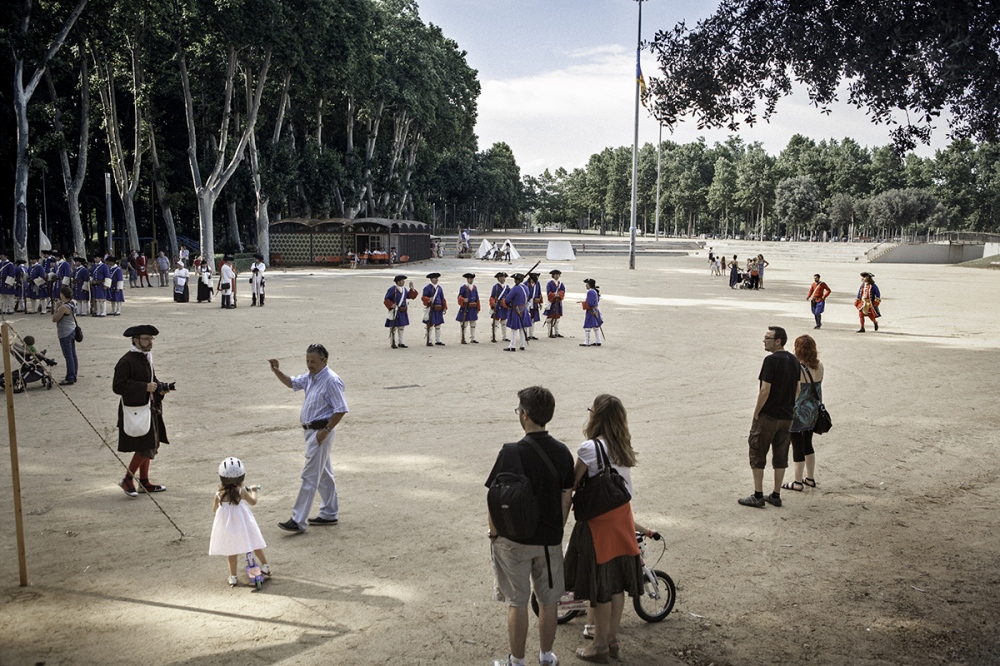 Public and reenactors hang around togther before the representation of Girona's 1714 siege, in Girona City. The interest of Catalan society towards 1714 facts have been increasing in parallel with the support to the current Catalan separatist process. 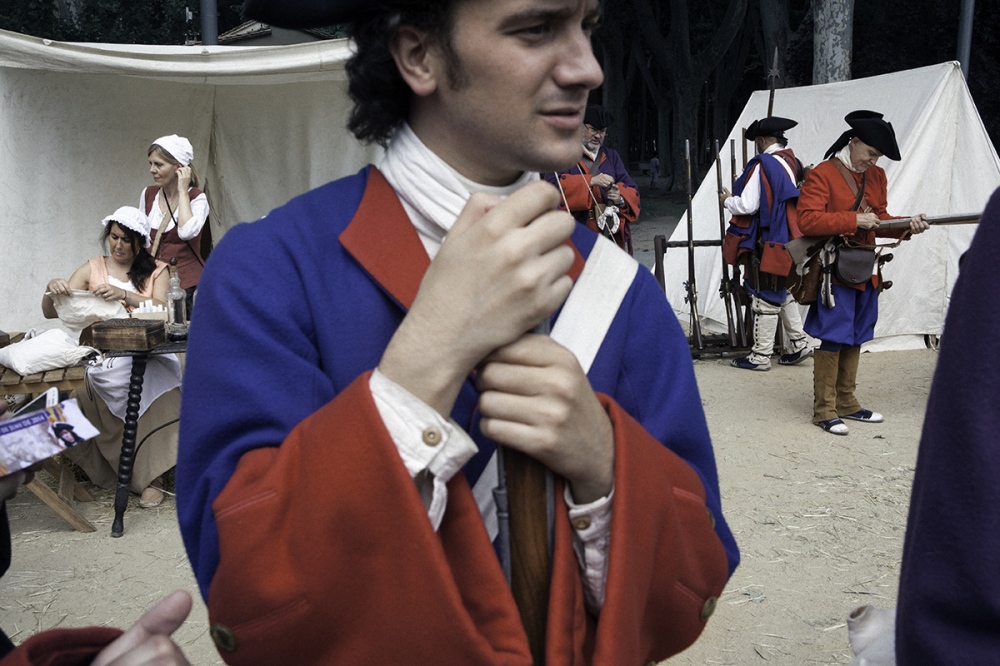 Several reenactors from" Miquelets de Catalunya" association prepare theirselves before the representation of Girona's 1714 siege battles. Many of the members of Miquelets sympathize with the current Catalan separatist movement, and consider reenactment as a way of patriotism. 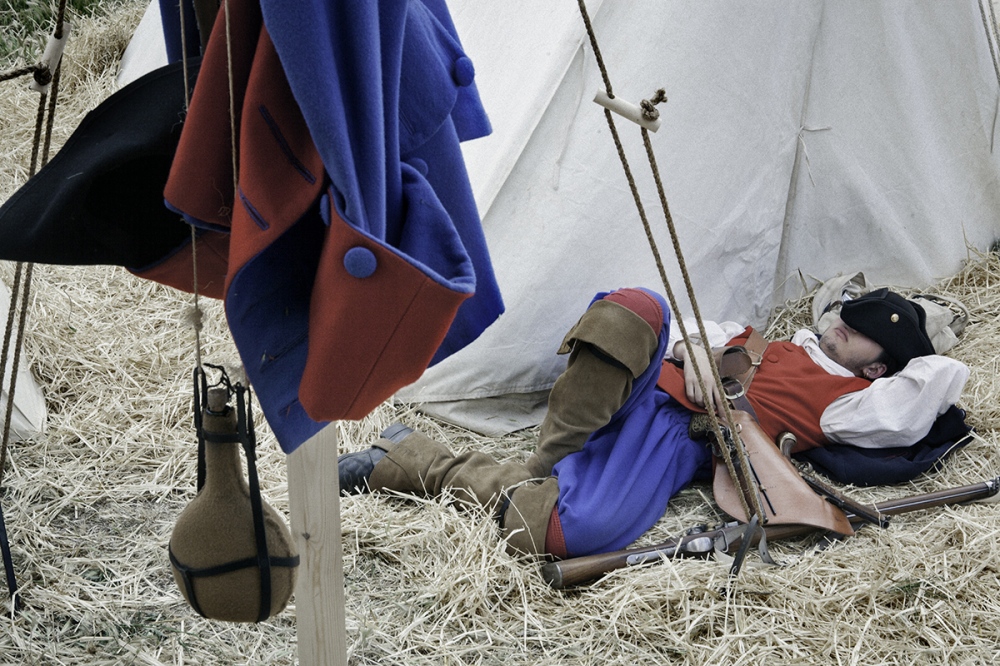 A member of "Miquelets de Catalunya" take a rest dressed as a XVIIIth century soldier. 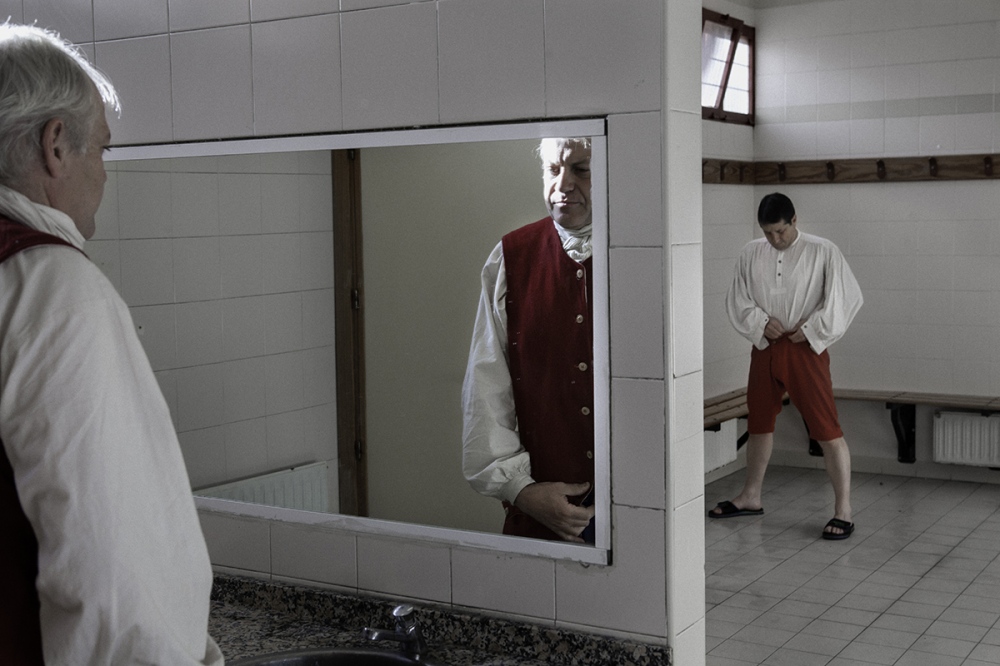 Reenactors prepare theirselves to be characterized as Catalan soldiers of the XVIIIth century. 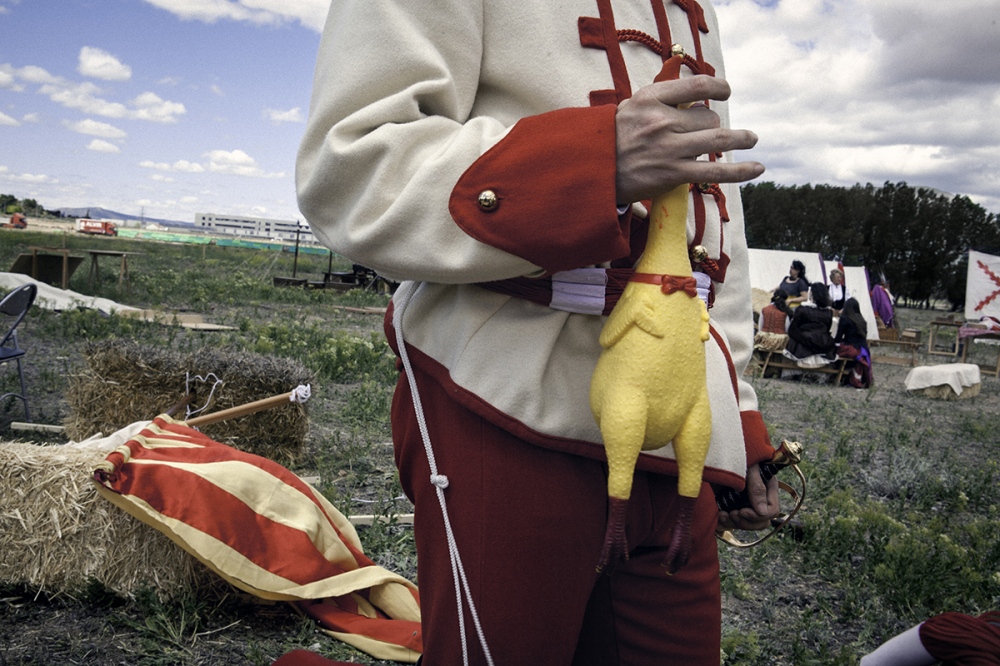 A young reenactor characterized as a hungarian soldier plays with a jelly chicken before a battle representation. Catalan flag appears defeated in the floor. 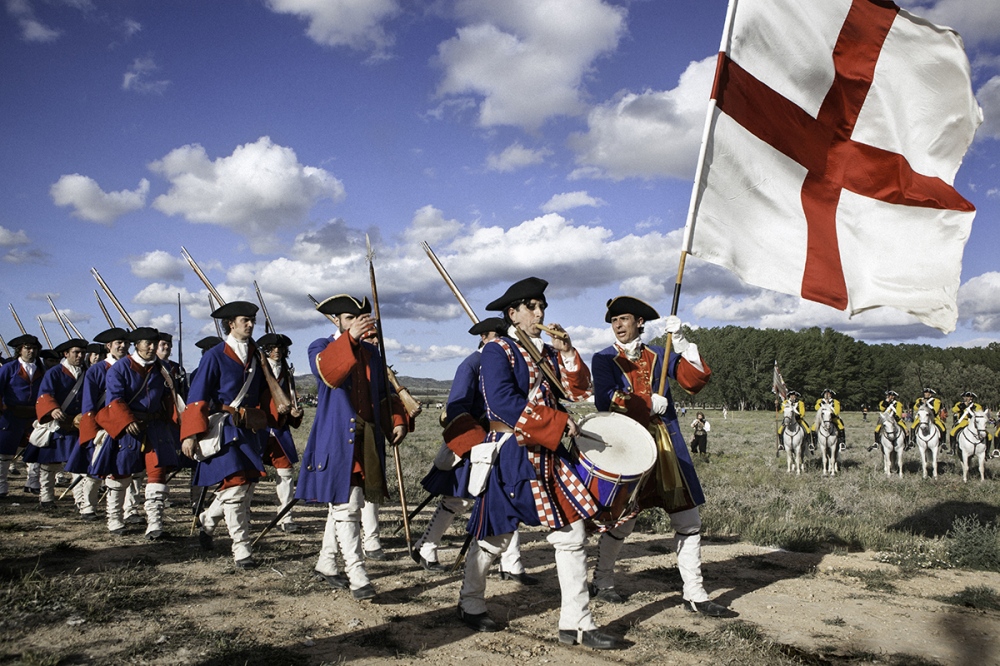 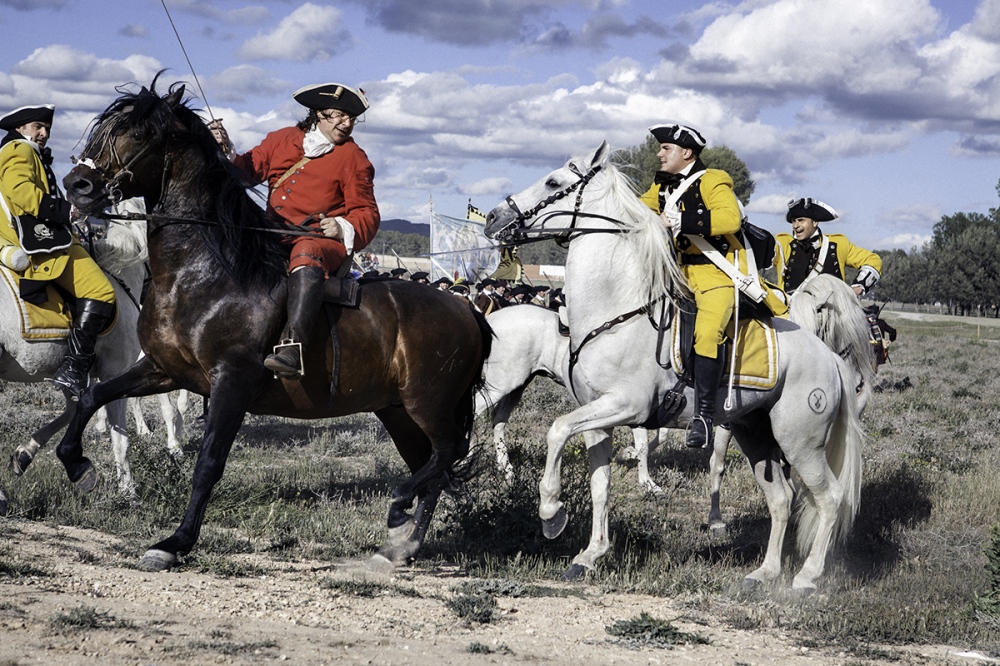 Representation of Almansa battle of 1707, in Almansa, Albacete (Spain). The reenactors representing riders of the Borbonic side (Current Spain's Kingdom family) are real riders, members of the Spanish Army. Most of Reenactors are aware of the symbolism of these battles inside the current political situation in Spain. 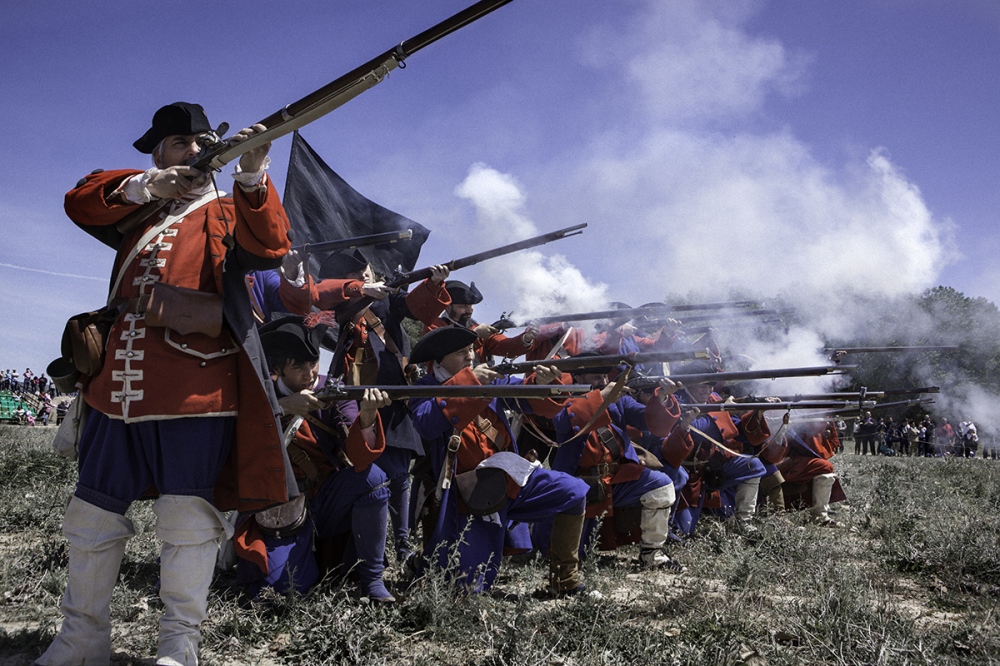 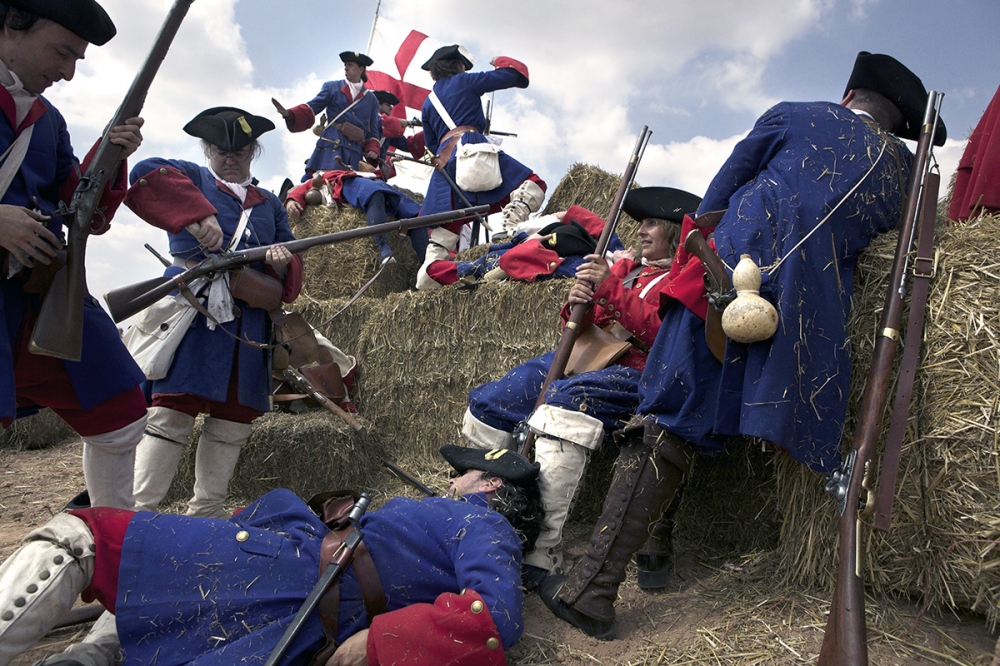 Representation of Prats de Rei battle, one of the many commemorations of 1714 battles held in 2014. 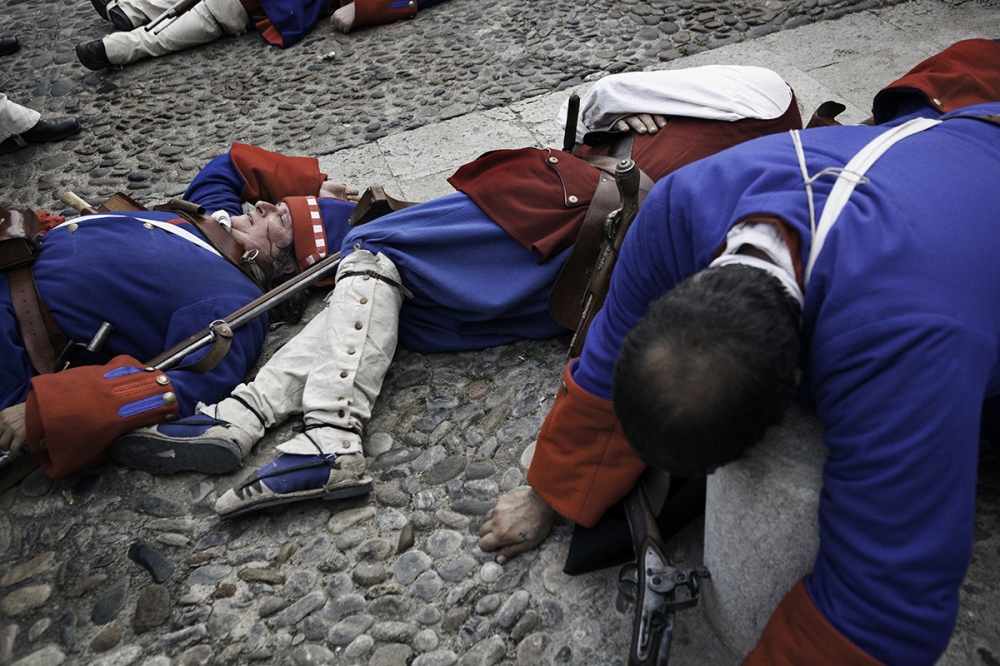 Catalan army is defeated during the represenations of Girona 1714's siege. 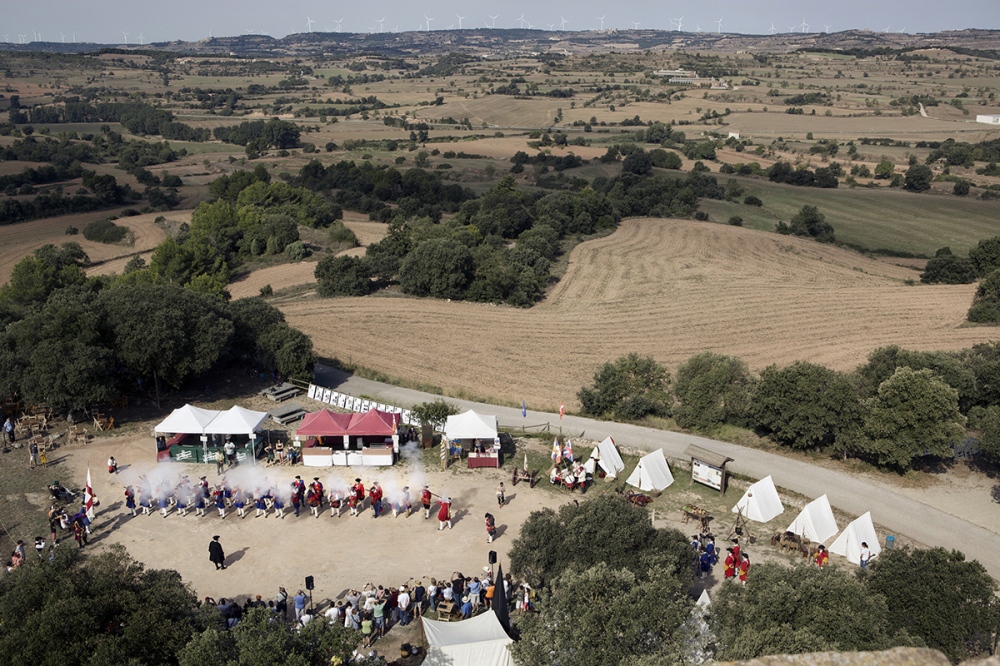 Soldiers shoot their guns in the same historical scenarios where 1714 battles happened in Prats de Rei (Barcelona). Many city halls and public institutions linked with the Catalan government have supported in several ways the cellebration of events commemorating the Catalan resistance in Succession War of 1714. 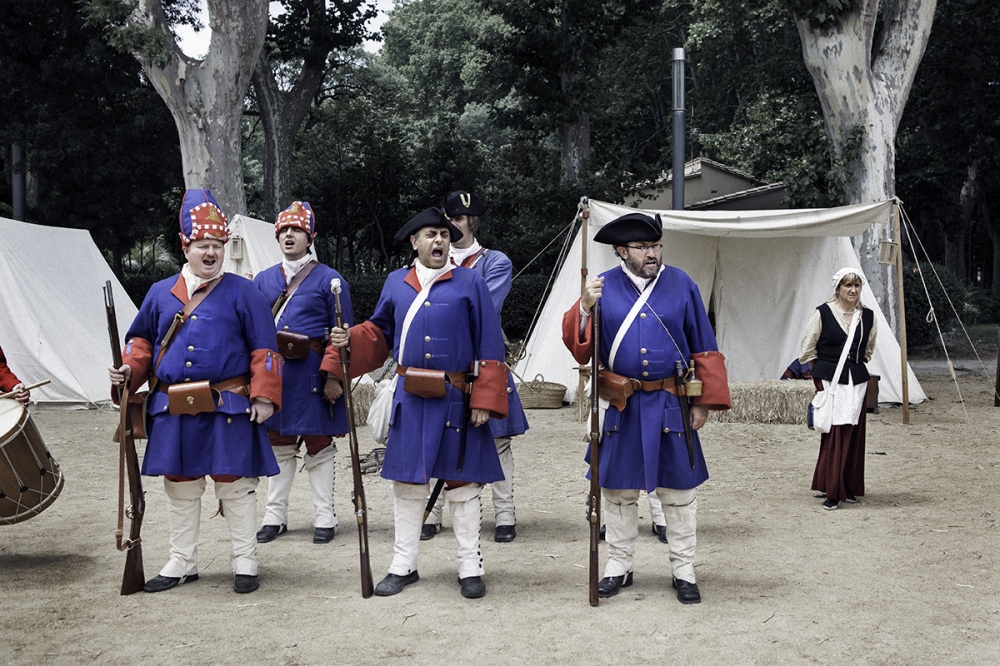 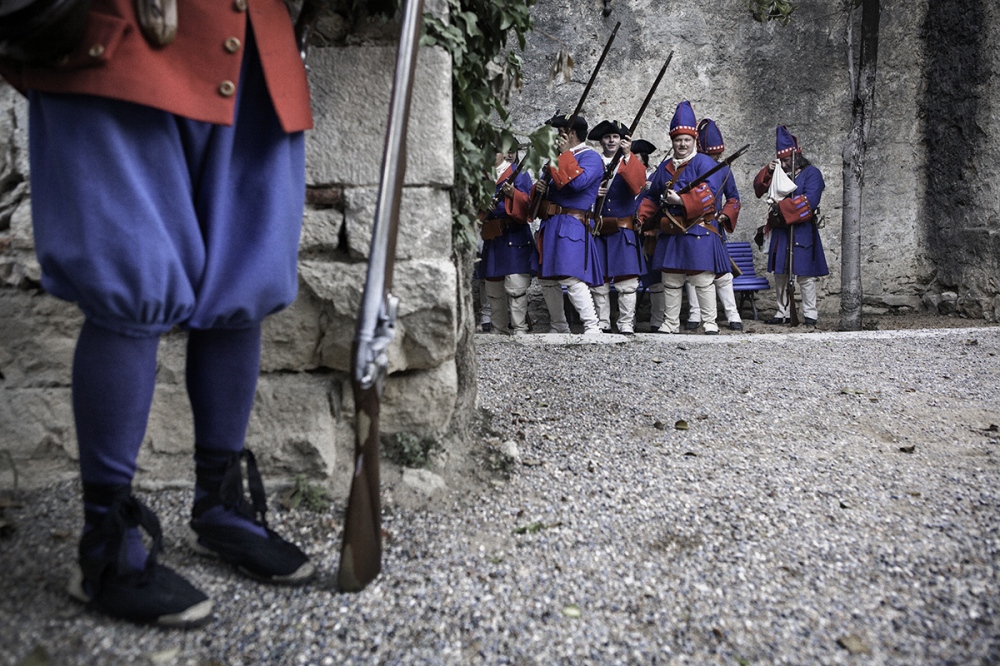 Miquelets is the main association of Historical Reenactment about Spanish Succession War, with more than 150 members representing the soldiers and characters of the Catalan army of the time. 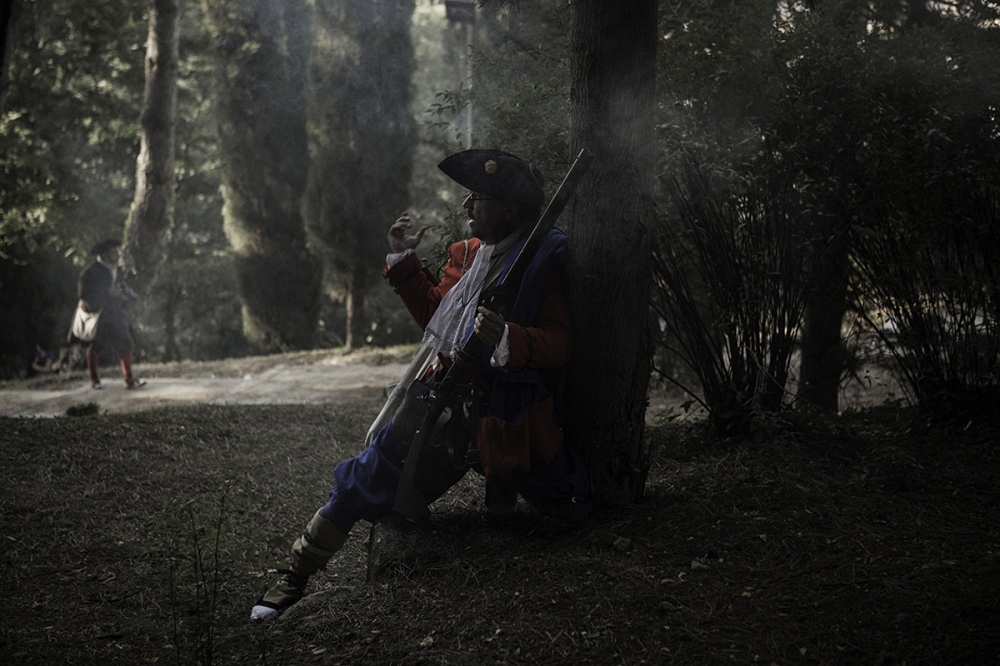 Representation of the Girona's siege of 1714. Representing soldiers of the time includes very often elemements of mythologization, and a romantic view of Catalan Defenders and their resistance, which can be easily idealized. 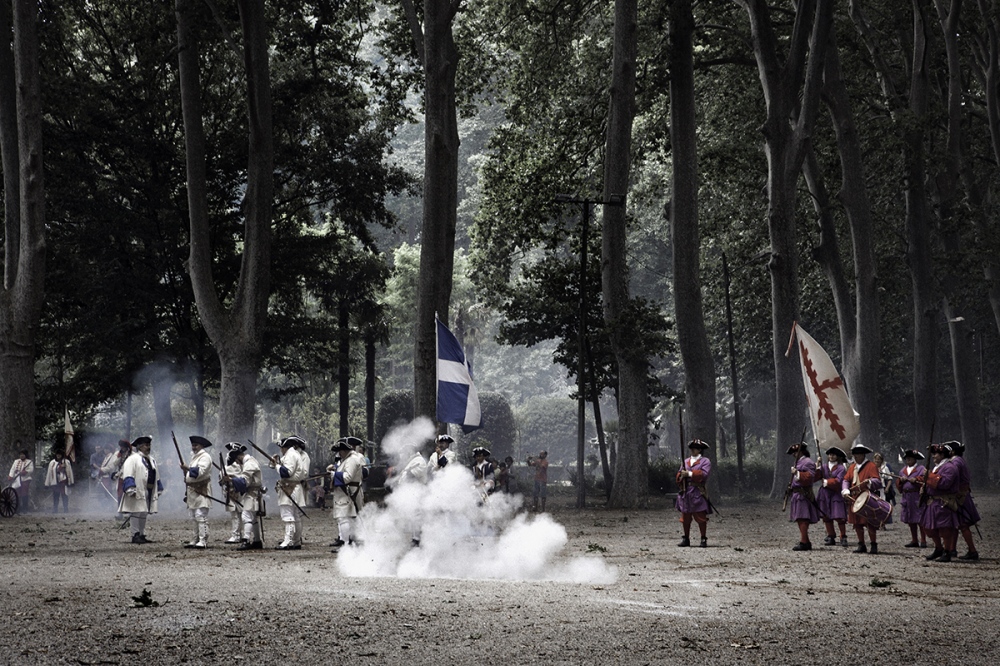 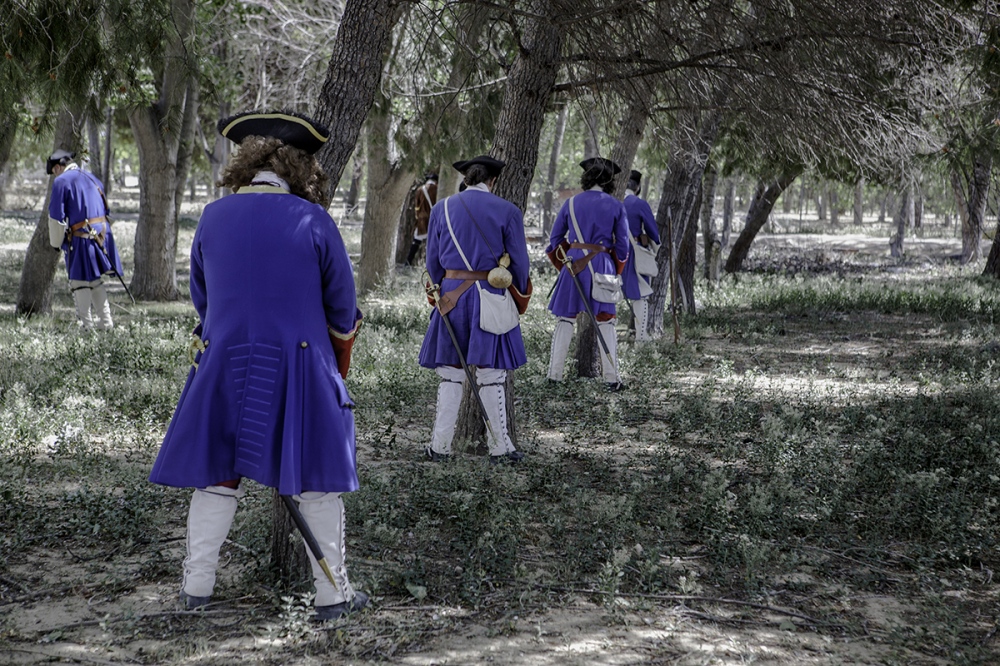 Reenactors "prepare theirselves" before a battle. 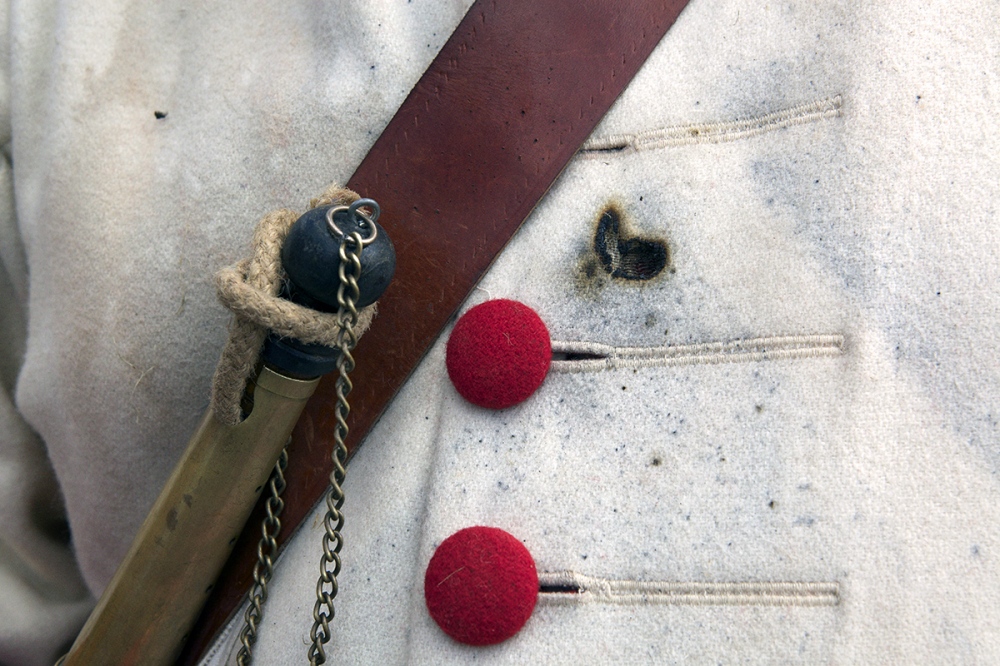 Detail of a uniform damaged by gunpowder's burns. 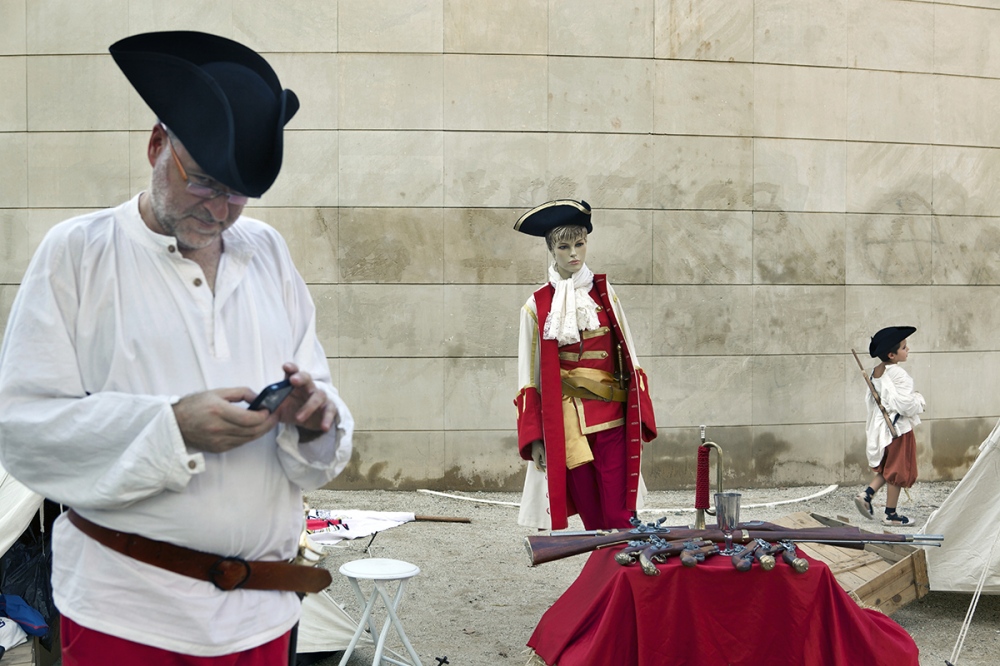 A man, a maniqui and a kid are seen dressed as a Catalan soldier of 1714. 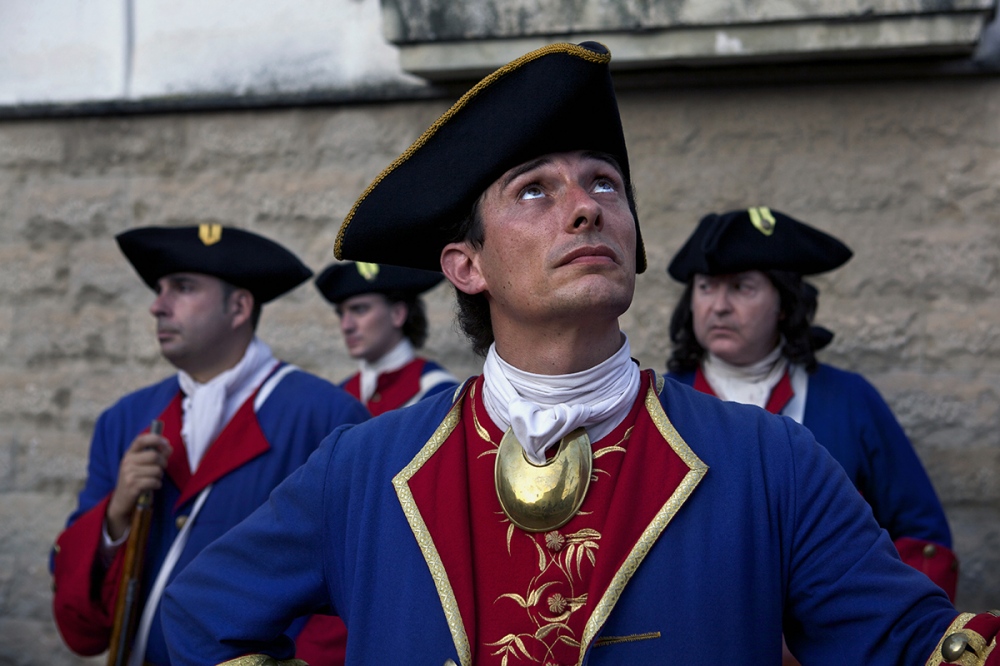 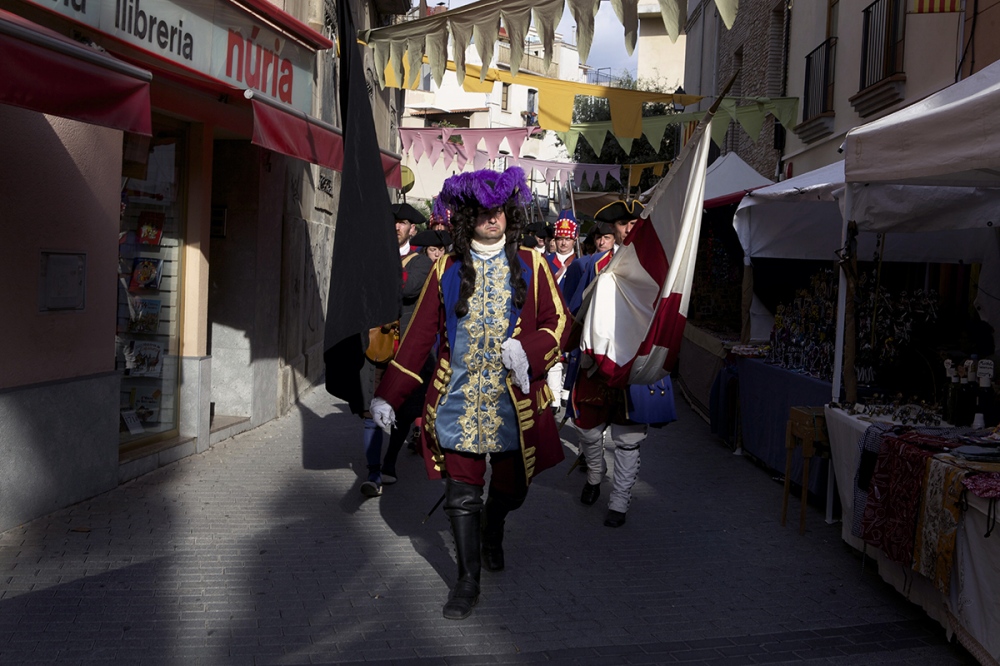 El "Marqués del Poal", a real historical character of the time, marching in front the Catalan army units. Reenactment includes very often elemements of mythologization, and a romantic view of Catalan Defenders and their resistance that fits into the current nationalist fever in Catalan society nowadays. 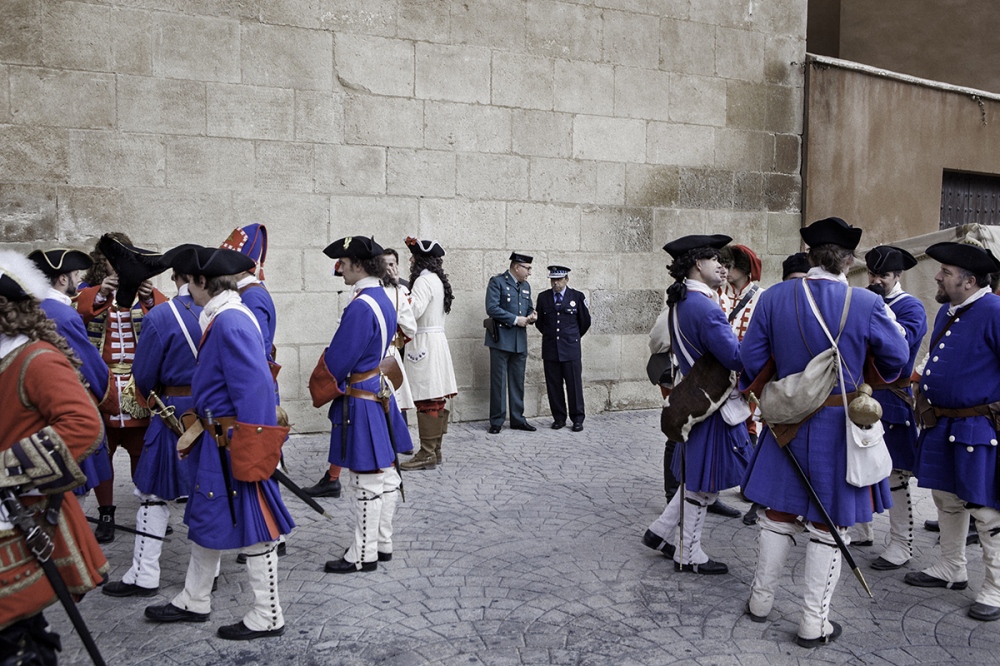 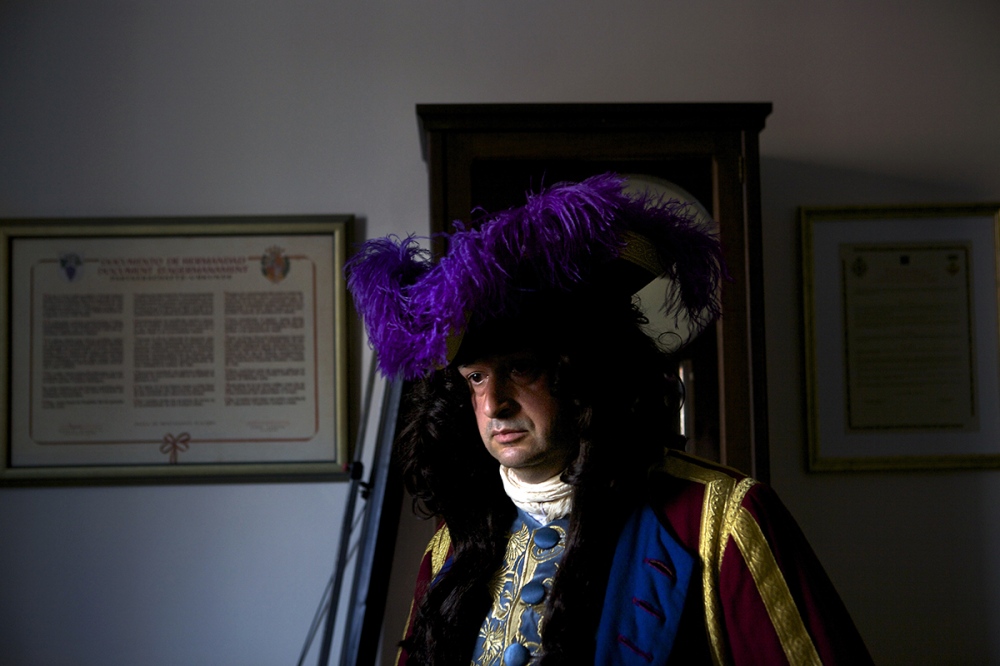 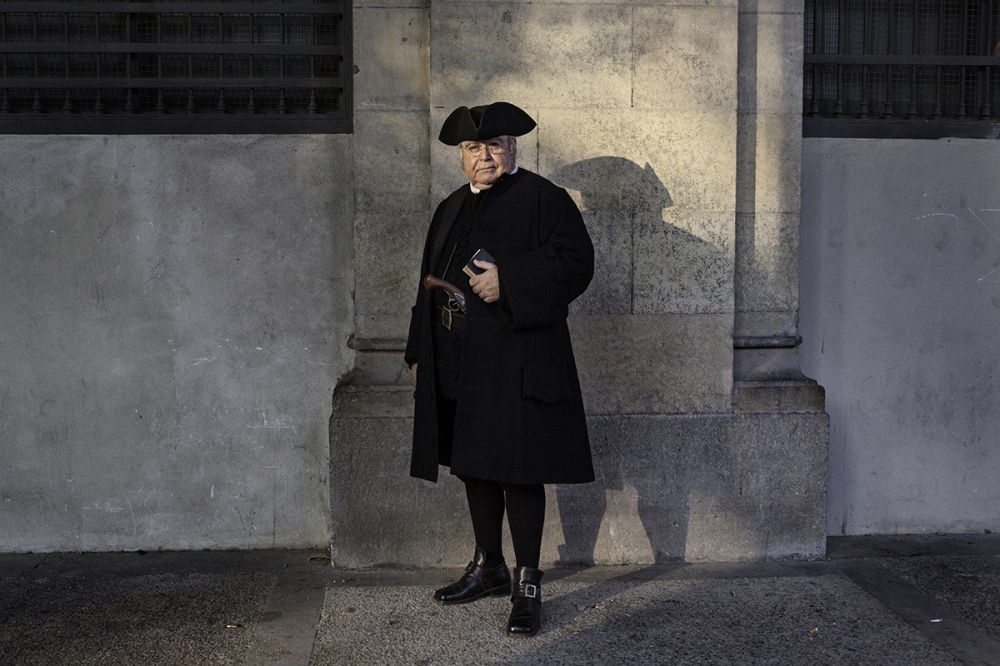 Quico Lluch, a retired 63 years old man from Alella town, represents a priest of the XVIIIth century. Although he considers himself a patriot, Quico didn't like to be characterized as a soldier, since he doesn't like militar discipline. 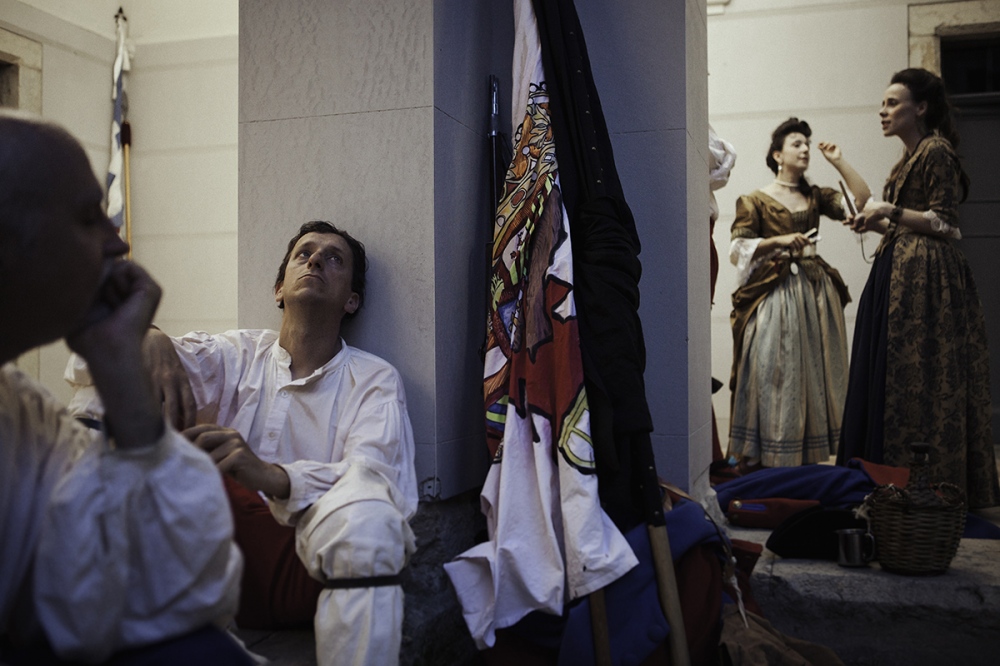 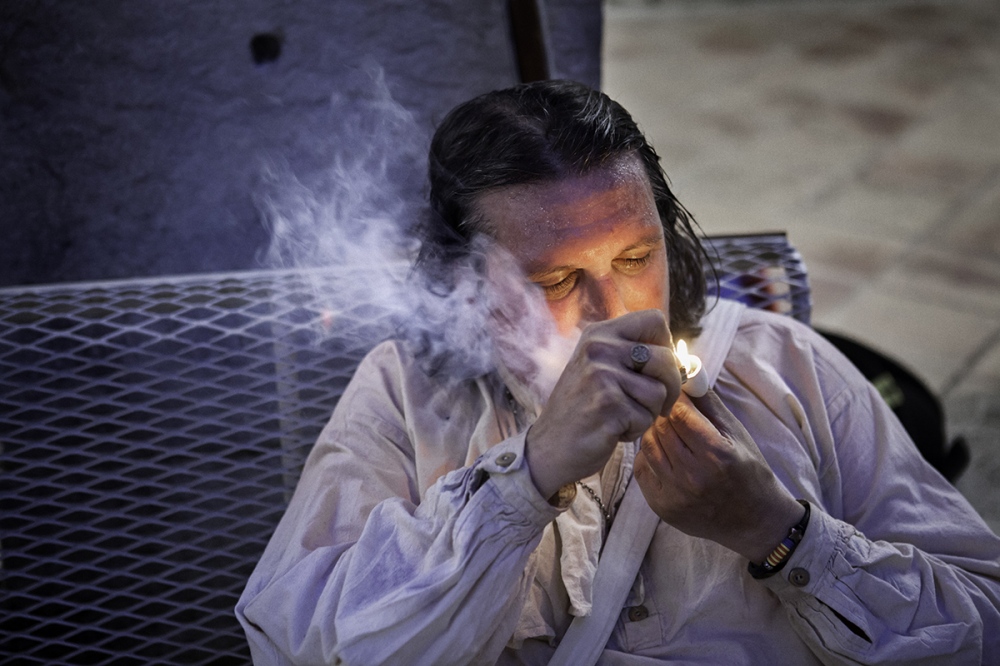 A man smokes in an old-fashioned pipe imitating a pipe of the XVIIIth century. 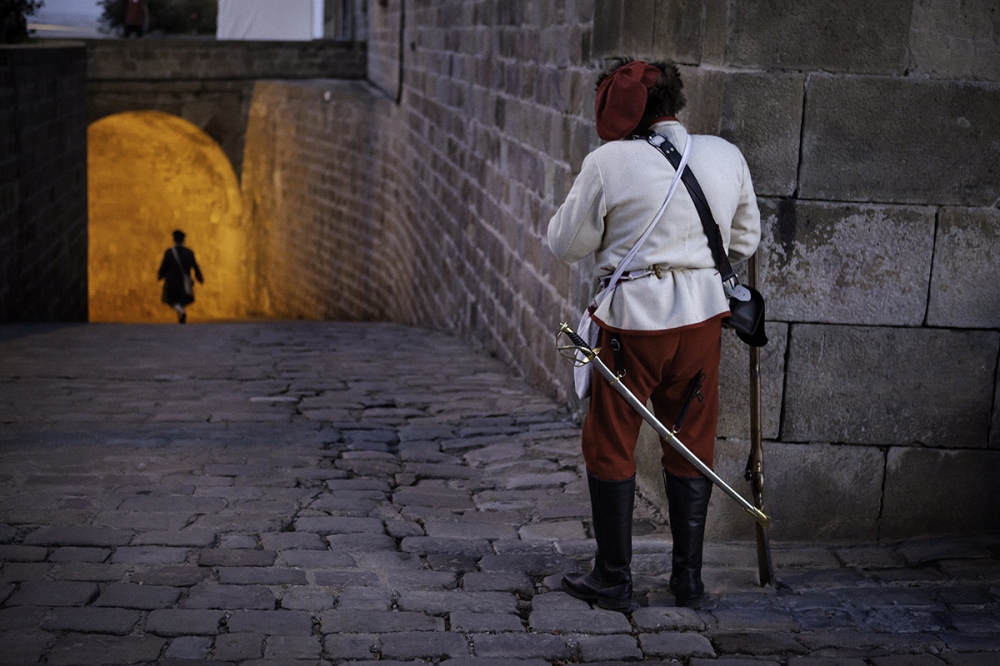 Representation of 1714 battles in Castle of Montjuich, in Barcelona. 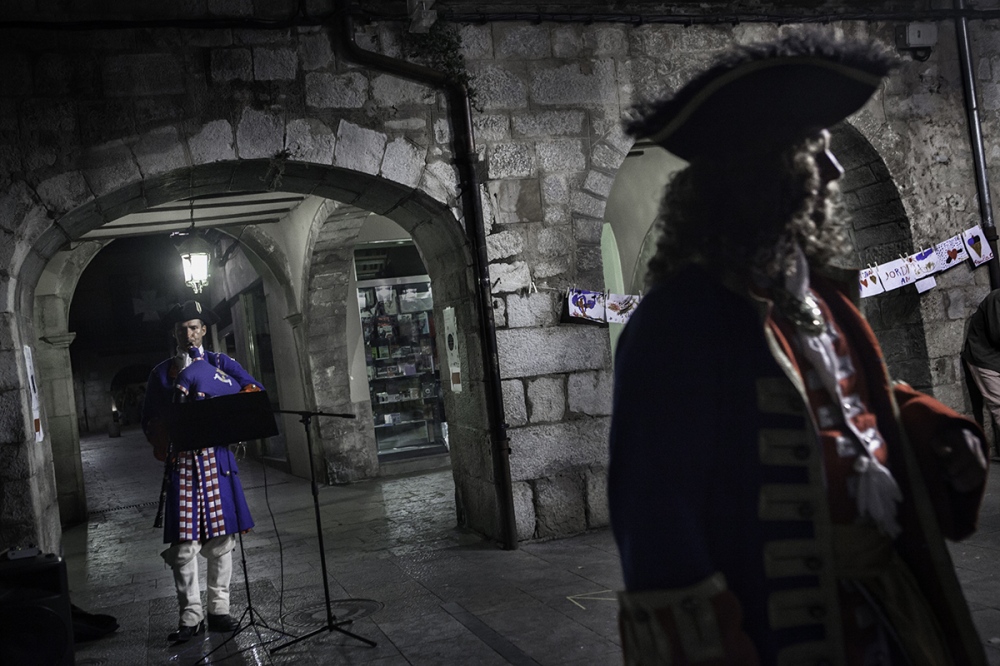 Traditional music and dances closing the night after the 1714 siege representations in Girona city.

2014 was the date that Catalan nationalism designated to held an independence referendum on November 9th. The date was no casual, but highly symbolic in the Catalan imaginary. In parallel to the current political process of indepence, Catalan society also recalls in 2014 the 300th anniversary of the fall of Barcelona during the War of Succes­sion in 1714. Thus, lots of events are happening these months around the Catalan geography in commemoration of the tercentenary 1714- 2014.

One of the most striking aspects of these events are historical reenactments of battles of the time. At these events, dozens of historical reenactors relive the 1714 scenarios, with weapons and uniforms of the time. Different groups recreate the tropos in Bourbon and Habsburg si­des. Every weekend tents and camps are set up, XVIIIth century uniforms are dressed, the guns are loaded ... a trip over 300 years ago in memory is held.

Miquelets de Catalunya is the leading association for historical recreation of this period in Catalunya. Its more than 100 members are during the week engineers, nurses, translators, restaurateurs... for becoming the weekend their alter-ego of 1714: “in defense of the rights, freedoms and institutions of the Catalans”.

Most reenactors, on both sides, are no strangers to the current independence process, and recreation becomes an act of deep personal involvement for many participants. A trip to the past… but with inherent implications in the present.

By Joan Alvado — SEEDS OF AUTONOMY Ecologic Agriculture towards Food Sovereignity in Cuba. After the failure of the Soviet..
Sep 19, 2016

By Joan Alvado / Diyarbakir — KURDISH WOMEN: INSIDE, OUTSIDE The conquest of public space. In addition to the known struggle of the..
Mar 23, 2015

By Joan Alvado / Aguiró — SCHOOL OF SHEPH ERDS The office of pastor is constantly shown and perceived by us as something nostalgic,..
Feb 26, 2015

By Joan Alvado / Barcelona — THE LAB Collective occupations: laboratories of housing against massive evictions. One of the main symptoms..
Feb 25, 2015