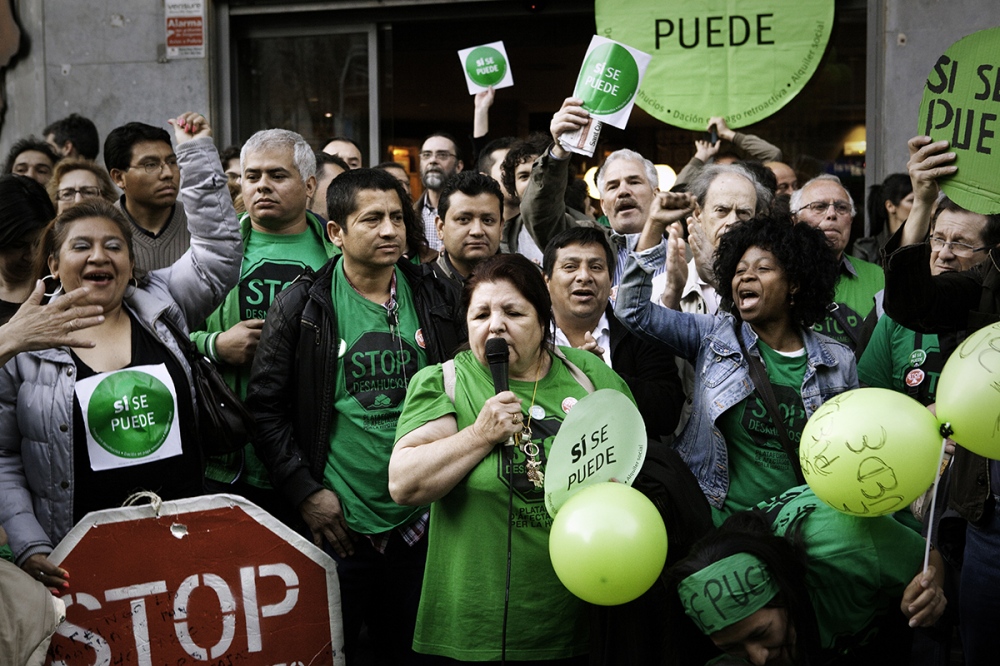 Activists from the Mortgage Victims Platform (PAH) protest in Barcelona in front of the Spanish government's Popular Party headquarters, demanding the approval of a Parlament law that would redefine Housing eviction policies in Spain. 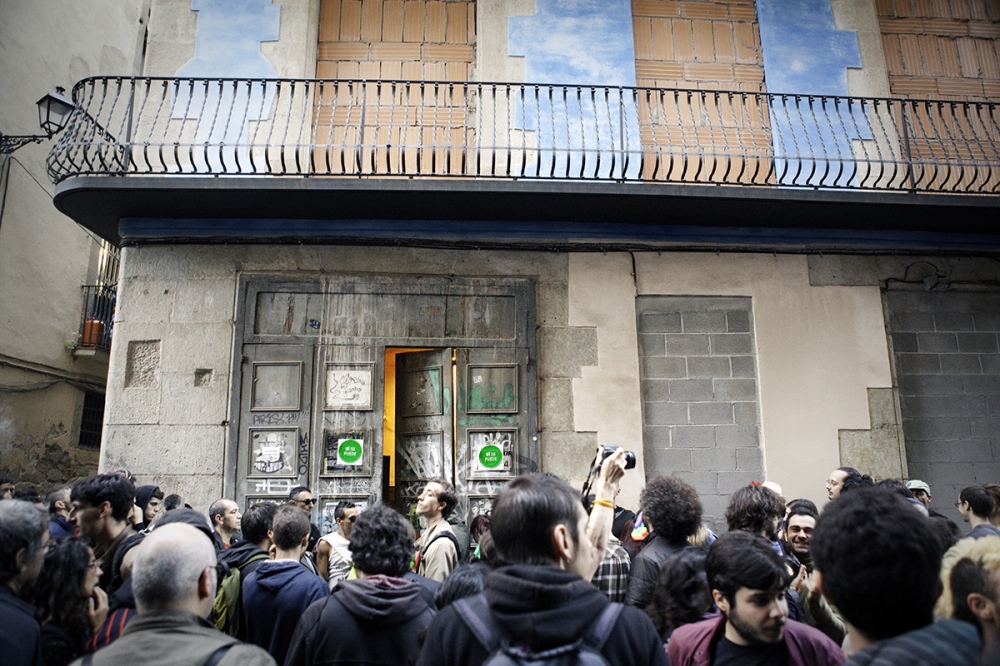 Activists end up a massive social demonstration with a public occupation of an empty building in the Gothic neigborhood of Barcelona downtown. The building will be destinated to shelter homeless families. 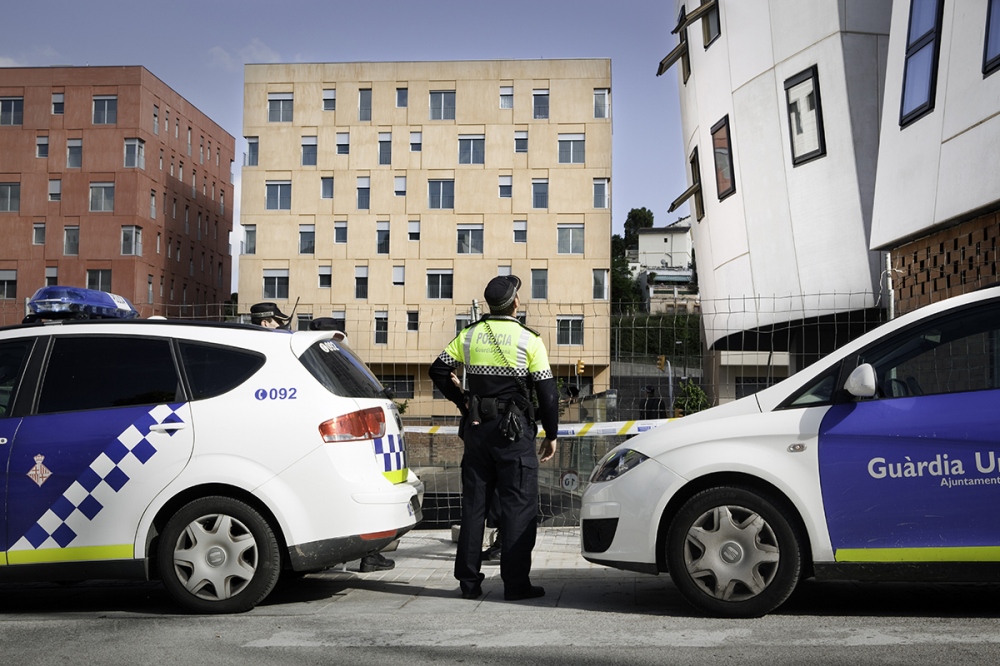 A municipal Police officer cordons the area of a new occupied building to give shelter to 12 families in the neigborhood of Torre BarÃ³ (Barcelona). 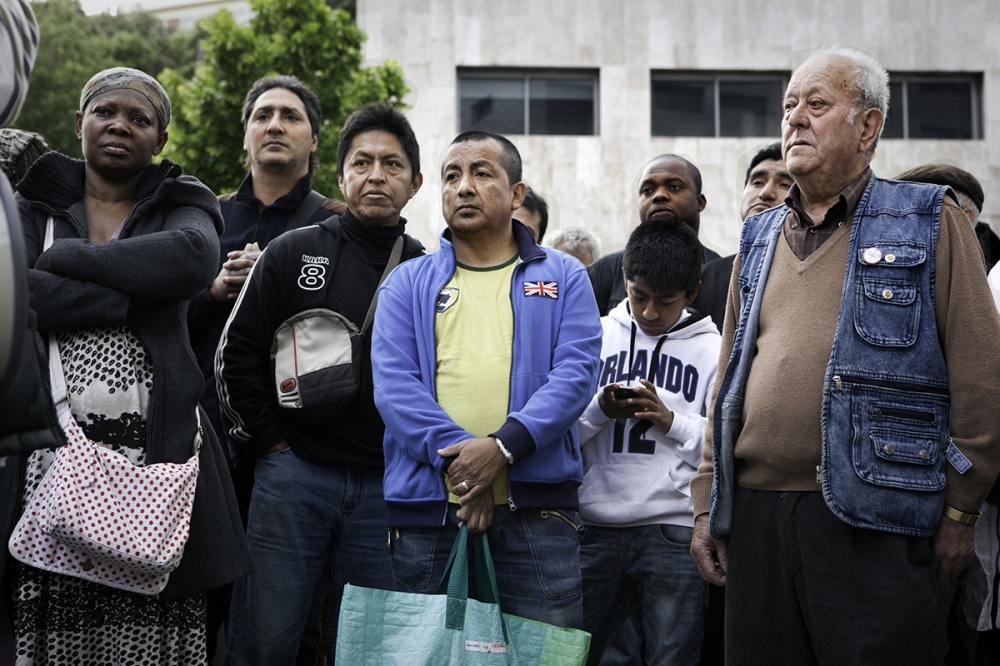 After the occupation of an empty building, neighbors of Torre BarÃ³ district (Barcelona) listen to the conditions of how the flats will be distributed within families who lost their home. Torre BarÃ³ is one of the district with higher rate of immigration and unemployment in Barcelona, a significant percentage of their residents are under eviction threat. 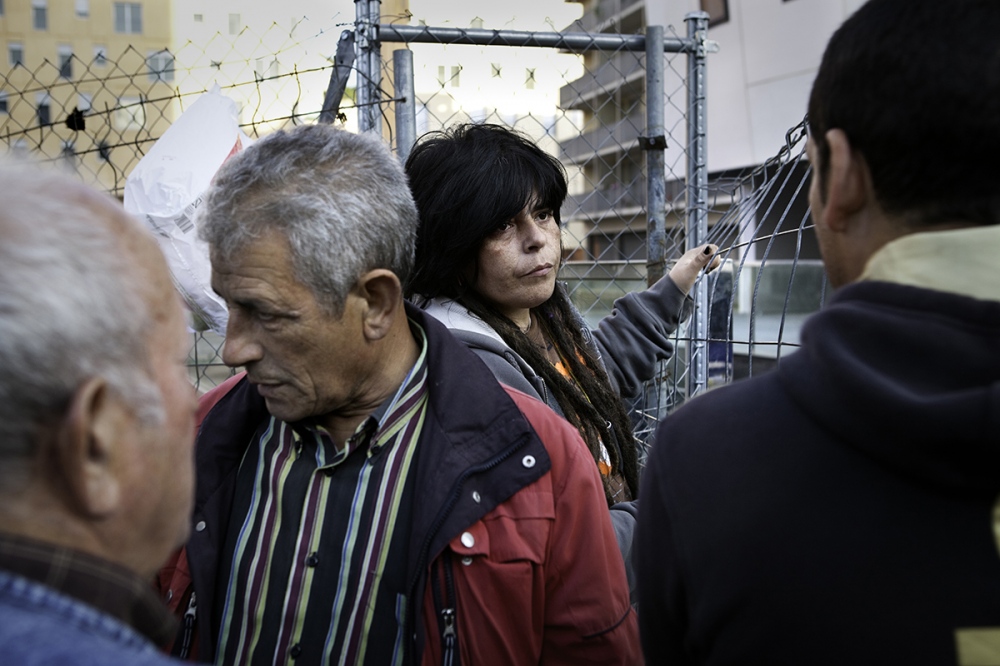 Elisabeth GarcÃ­a (37) lost her rental home in Barcelona after being unable to pay the rent, and found herself homeless. Elisabeth was reallocated in a social flat occupied by activists in Nou Barris district (Barcelona). 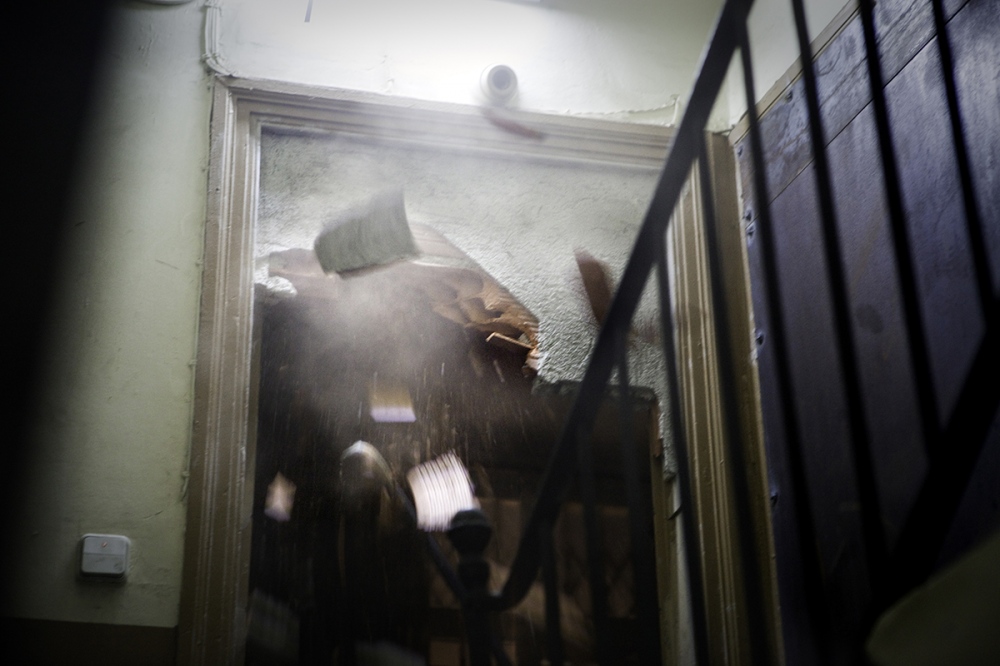 The entrance door of a boarded up home is broken by an activist during the public occupation action of an empty building to give shelter to families who need it, in Barcelona downtown. 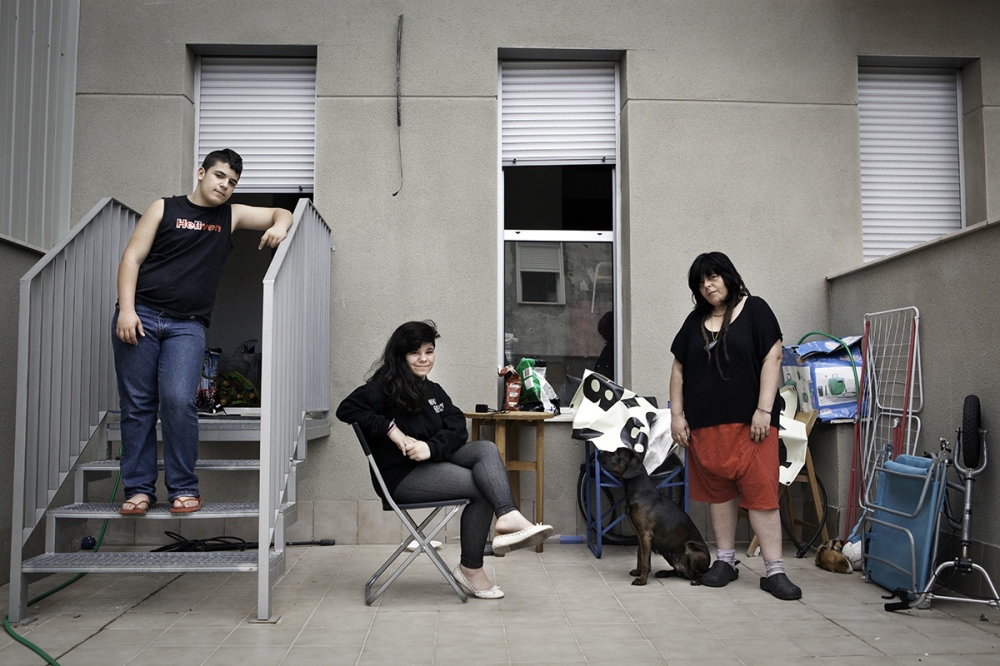 Elisabeth GarcÃ­a (37) with her sons Alex (14) and Alba (15). Elisabeth lost her rental home in Barcelona after being unable to pay the rent, and found herself homeless. Elisabeth family was reallocated, with other three families, in Insula Utopia a social project occupied by activists in Nou Barris district (Barcelona). 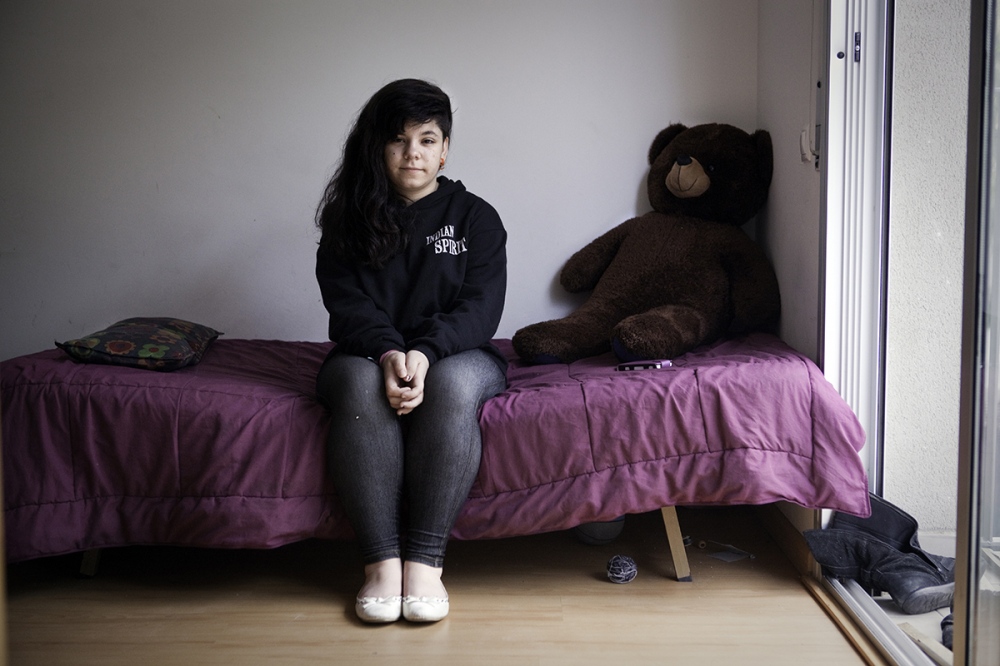 Alba MartÃ­n (15) lived with her mother, grandfather, and one brother in an occupied flat in Insula Utopia, a social project for homeless families that lasted from march 2013 till may 2013 in Nou Barris district (Barcelona). 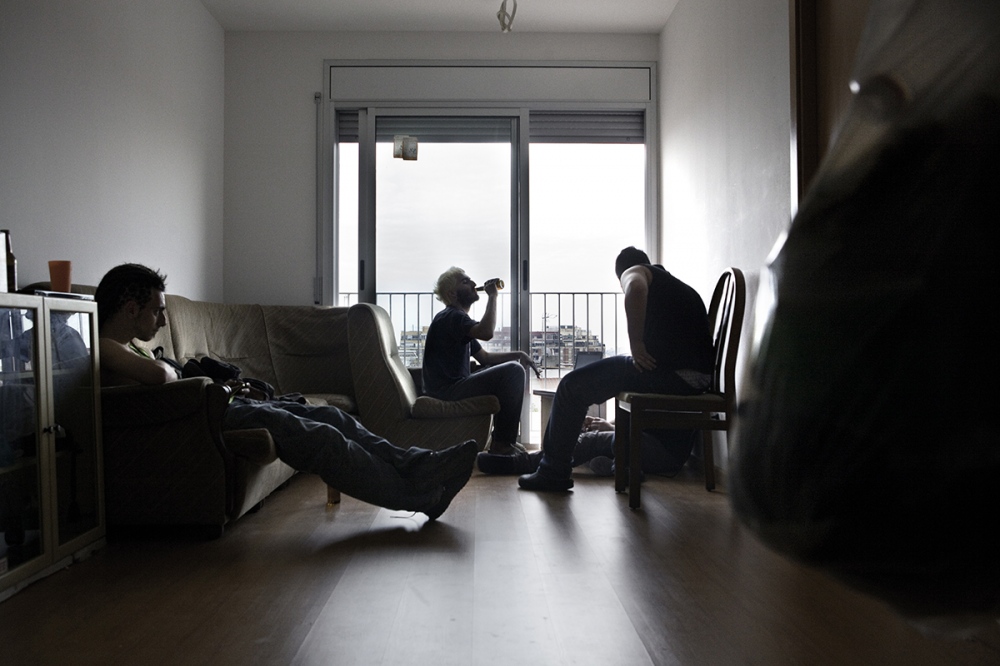 Young activists lived in one of the flats of Insula Utopia, a social project to reallocate evicted families that lasted from march 2013 till may 2013 in Nou Barris district (Barcelona). 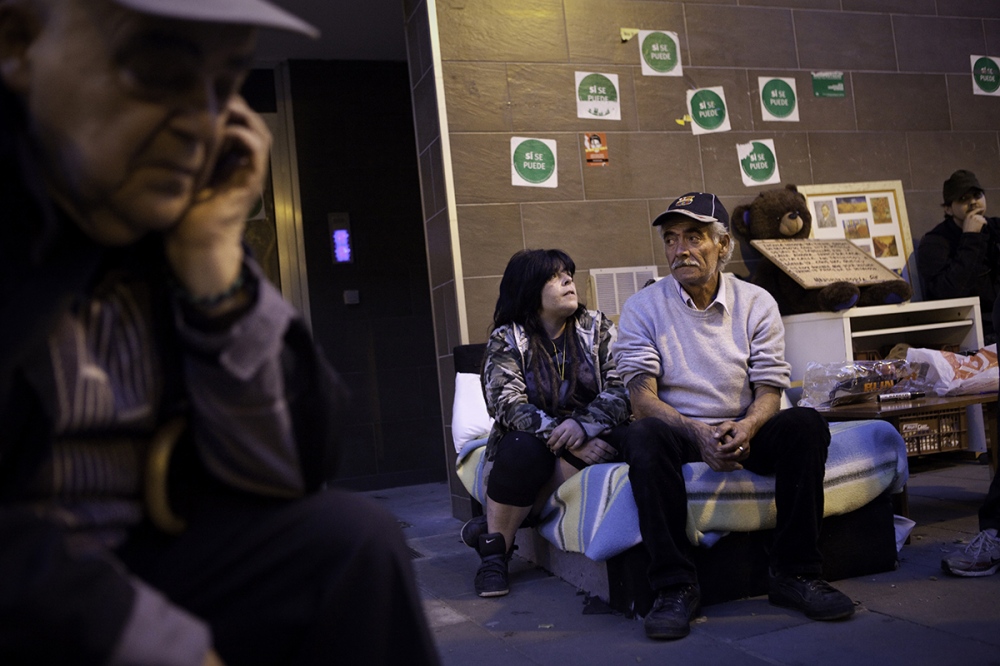 Elisabeth Garcia and his father Manolo, passing night in the street with all their belongings after police eviction of Insula Utopia, a social project that gave shelter to three homeless families and activist for three months in Nou Barris district (Barcelona). 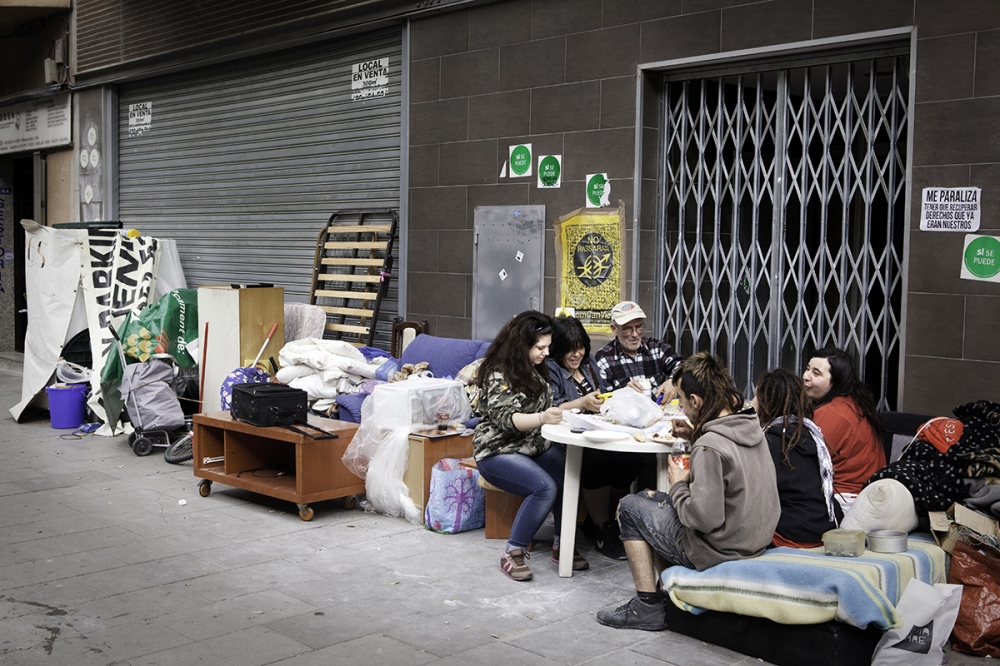 Residents of the occupied building Insula Utopia having lunch in the streets of Nou Barris (Barcelona) after police sealed the building. After the closure of Insula Utopia, the families spent nine days sleeping in the street with all their belongings, demanding a social housing alternative from Barcelona city hall, since they didn't have where to go. 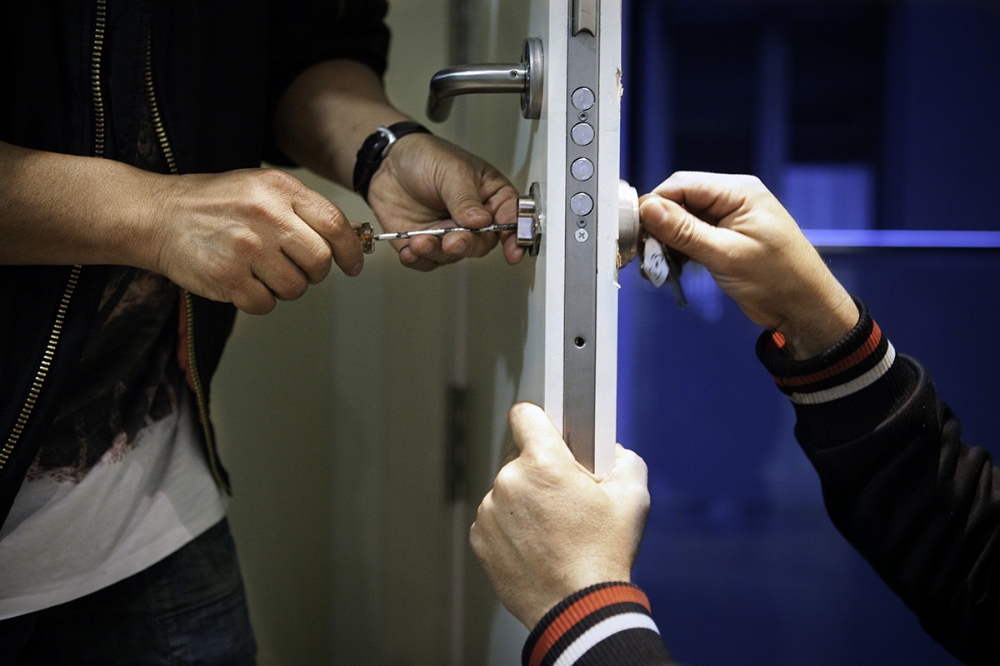 Activists from the PAH (Mortgage Victims Platform)of Sabadell city (Barcelona) changing the lock of every flat after occupying an empty building in Sabadell with capacity for 40 families, property of SAREB bank. 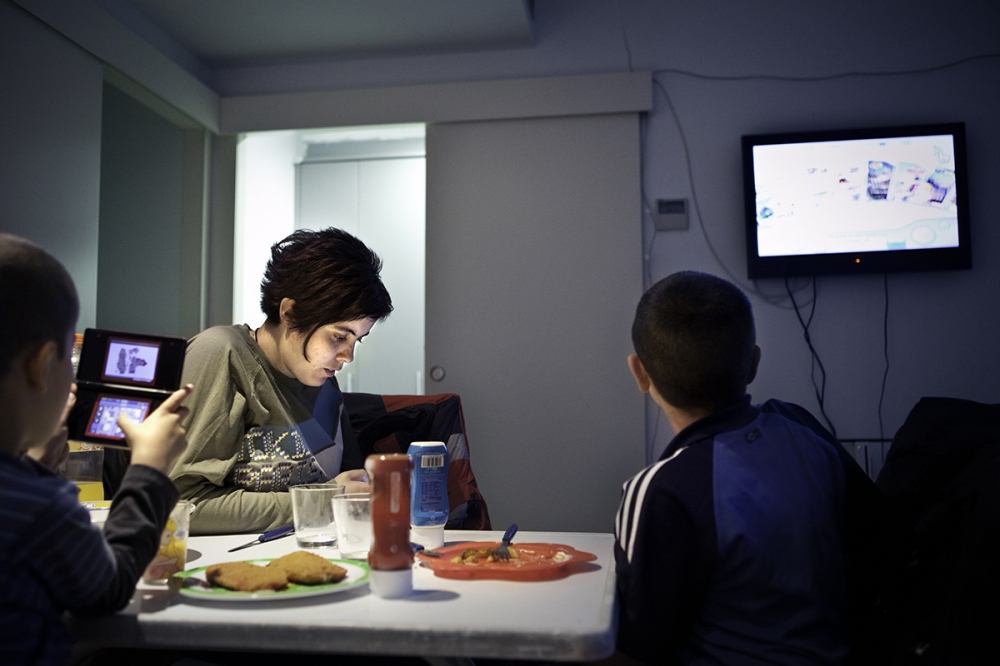 Laura lost her home for not affording to pay the mortgage and now lives reallocated with her family in a social block occupied by PAH Sabadell. The local Mortgage Victim's Platform of Sabadell (Barcelona) has squatted already 3 buildings. The one where Laura is living has capacity for 40 families. 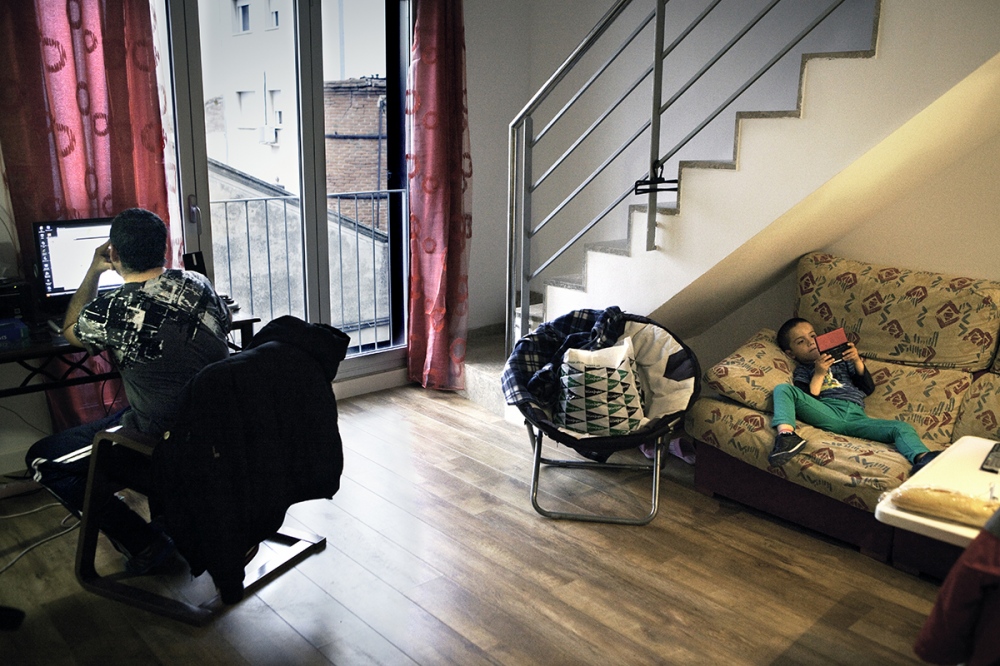 After loosing his home for not affording mortgage, Miguel Angel its been reallocated by activists of PAH Sabadell to an occupied block in a new district of Sabadell. His children live now too far away from their school, but families and activists are now managing a set of 40 houses in very good shape. 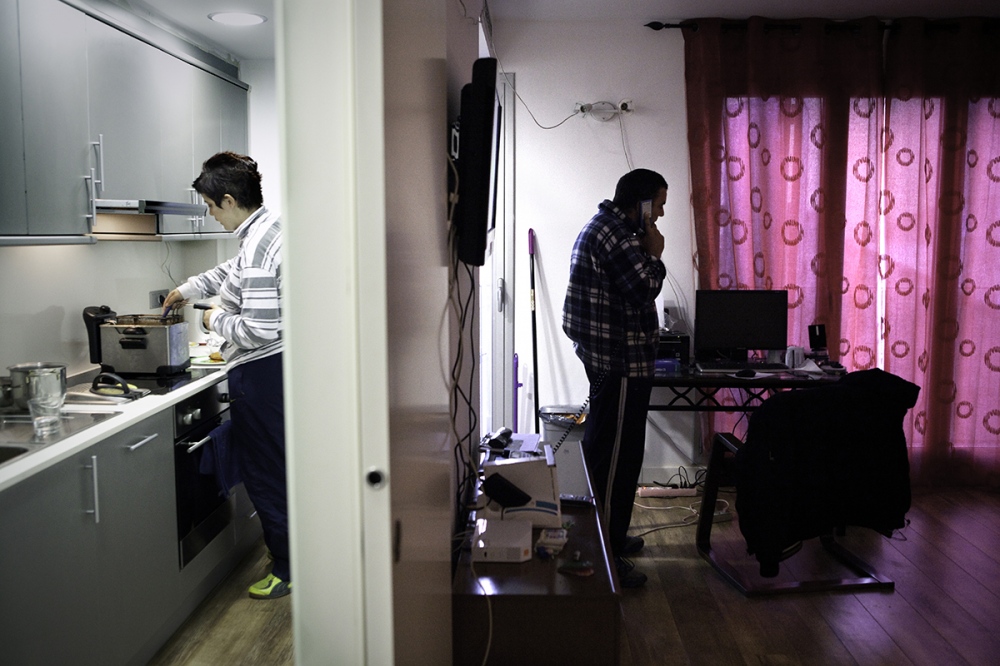 Miguel Angel and Laura, spanish couple, live with two children in their new flat of the third occupied block of PAH Sabadell. Currently they are both unemployed, and lost their house after several months debt with the bank. 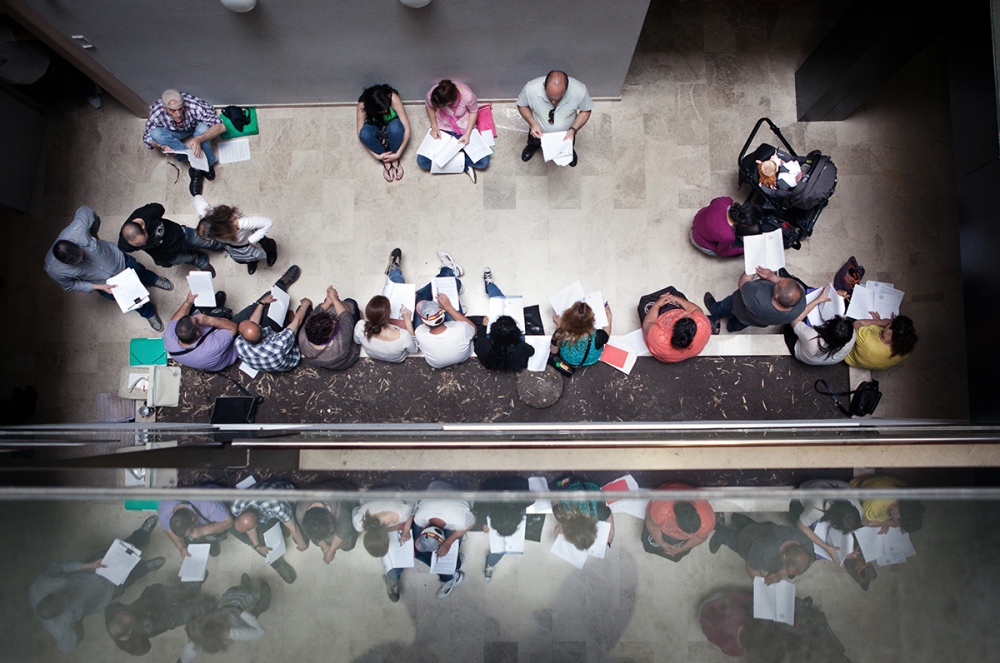 Meeting from the PAH Sabadell activists and families, in the common space of an occupied building in Sabadell (Barcelona). Requests to enter the building are evaluated in collective weekly assembly, to deliver flats to families who strictly need it. 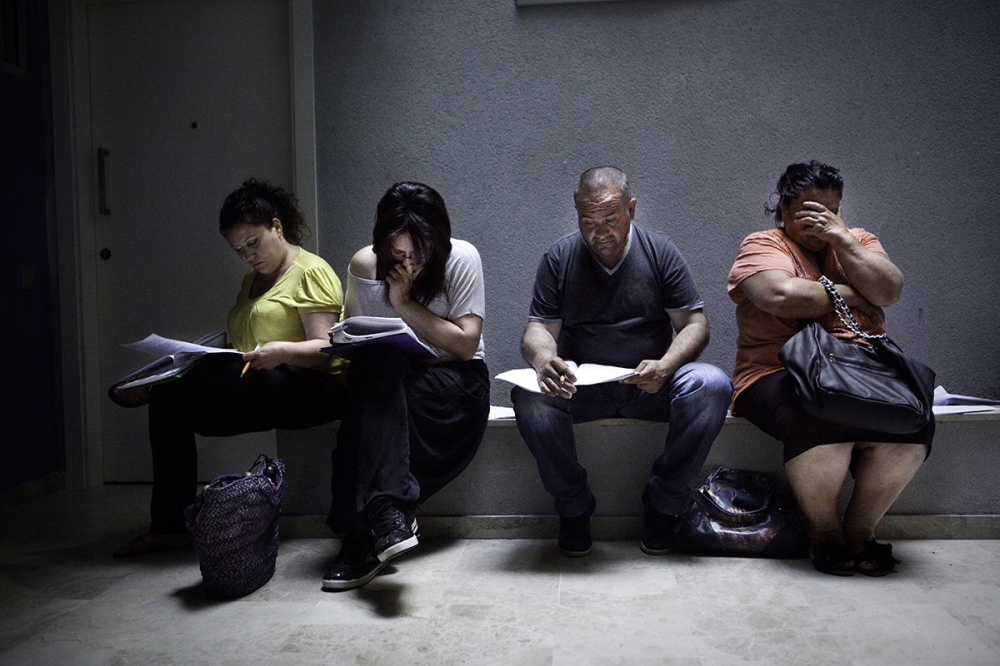 The PAH Sabadell (mortgage victims Platform) gives a support workshop for helping affected people to study their housing contract conditions. Common space in an occupied building for families is used for this social activity. 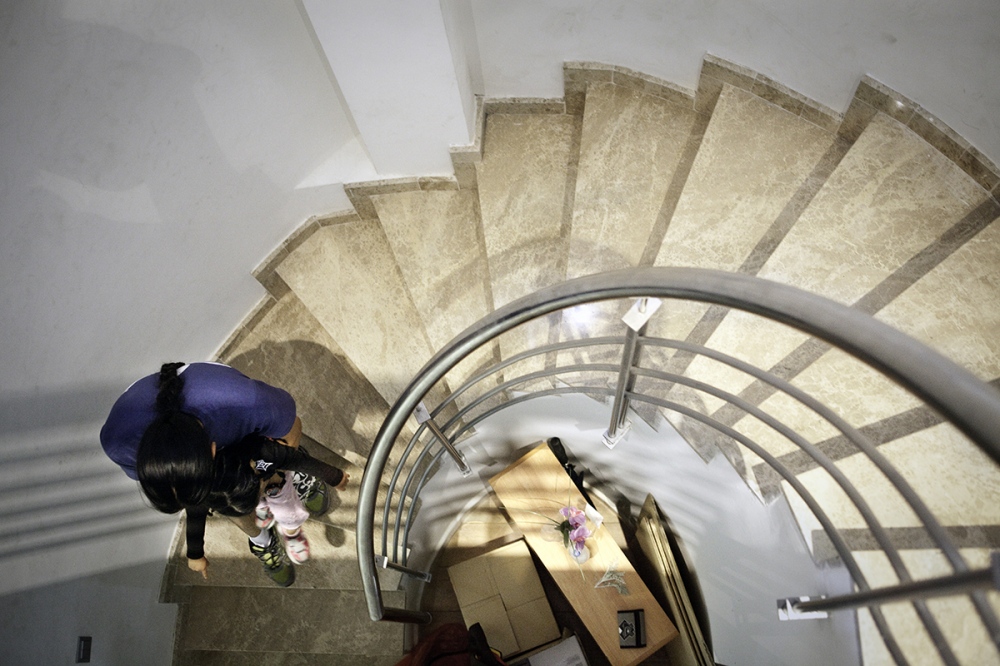 The activists of Mortgage Victims Platform (PAH) has occupied 13 buildings in different cities of Catalonia, giving shelter to more than 700 persons. CÃ©sar and his family, from Ecuador, live in one the 3 buildings occupied in Sabadell (Barcelona). 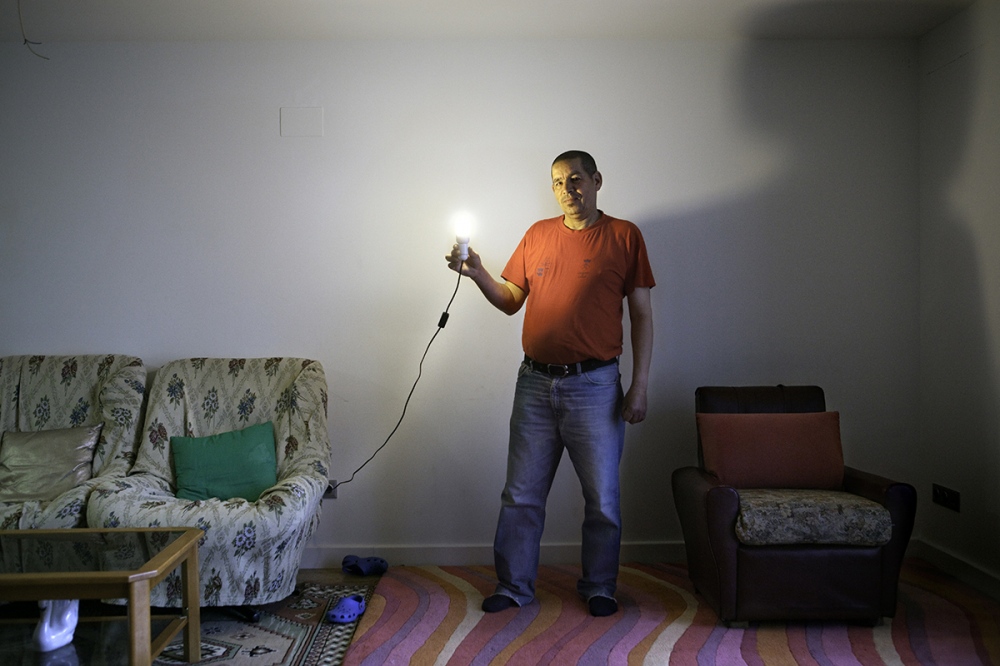 Abdellah, 53 years old, is a bereber from Marocco. He arrived alone to Barcelona in 2003, where he was earning his live working in the construction sector, specially as a plasterer. For years, there was plenty of work, and in 2008 he bought a flat in Sabadell and then brought his family - wife and two child - from Marocco to live with him. But after some years jobs started to vanish, and the familiy received order from the bank to leave their home. They didn't have almost incomes, neither where to go. The local Sabadell section of PAH rescued his family just a few days before they find theirsleves in the street, and install them into the third occupied block of the city. Now Abdellah join some of the actions of the PAH, and try to give back some of the solidarity received. 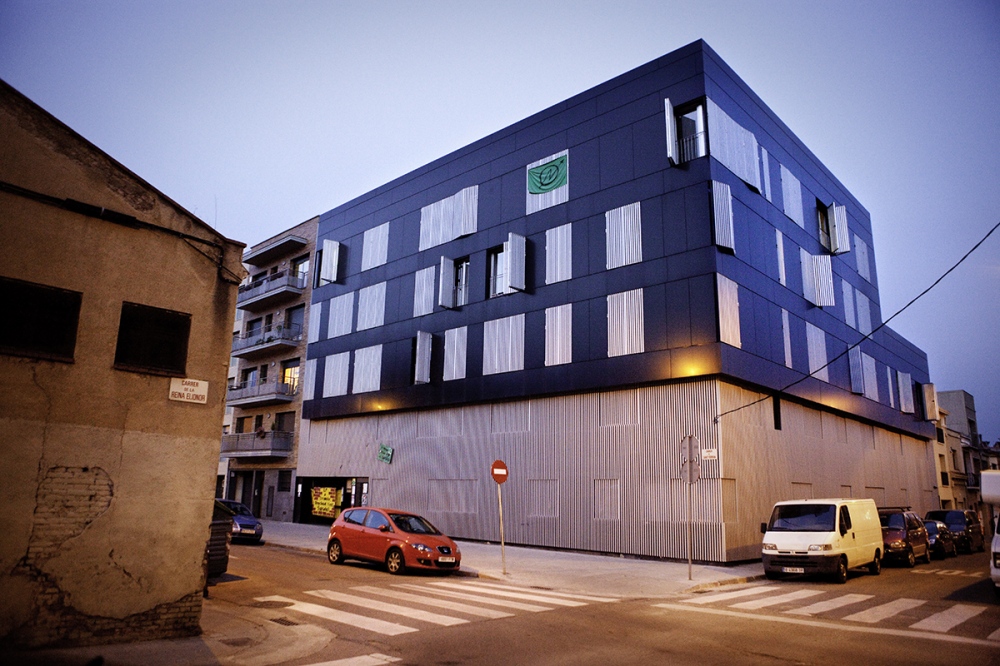 View of the third block occupied in Sabadell by Mortgage Victims' Platform (PAH), with capacity for 40 families, which is property of the SAREB bank. 13 buildings occupied by activists of PAH in Catalonia are giving shelter to more than 700 people who lost their home in crisis period.

THE LAB
Collective occupations: laboratories of housing against massive evictions.

One of the main symptoms of the economic crisis in the Spanish state has been a high increase in evictions due to non-payment of the mortgage: it is estimated that more than 170.000 families have been evicted since the beginning of the crisis in July 2008. In response to this, evicted people and support groups are now promoting the initiative of occupying housing blocks to prevent families are left without home.

The main solidarity group is the Mortgage Victim's Plaftorm (PAH). PAH intensified since 2013 a campaign which reclaims the occupation of unused buildings owned by banks as a way of managing social housing in extreme cases, when the evicted families have nowhere to go.

There are now more than 15 buildings reoccupied by the PAH collectives in Catalonia. All these properties were owned by banks, and accumulated years of disuse. 15 housing blocks that now are shelter for more than 1000 people. In addition, other solidarity groups promote collective occupations too.

The reason for the expansion of this phenomenon is clear: more and more Spanish families are in extreme situation after eviction. The occupations also serve to put pressure on government and banks when negotiating for solutions. The main objective of these negotiations is, to achieve cancellation of the debt owed to the bank once families had left the house.

The strength of the group: Self-Management Laboratories

For many leftist sectors, occupied blocks transcend beyond the mere pursuit of achieving a cell ceiling and a floor. According to them, in the blocks is taking place an unprecedented social experiment: the buildings are laboratories of self-management for housing.

Sabadell is one of the Catalan cities where activists have more experience, with 3 occupied buildings. Each week, block incoming requests are decided in PAH's assembly. The resident families are informed that it means also responsibilities with the social project the block. Residents are Spanish, Africans, Gypsies, South-American ... very different families with similar problems.

Then, while the housing system in Spain continues between collapse and hibernation, the period of mass evictions is being followed by one of alternatives. Civil society has moved ahead of institutions, and is no longer awaiting a response from them: now is time to take the initiative.