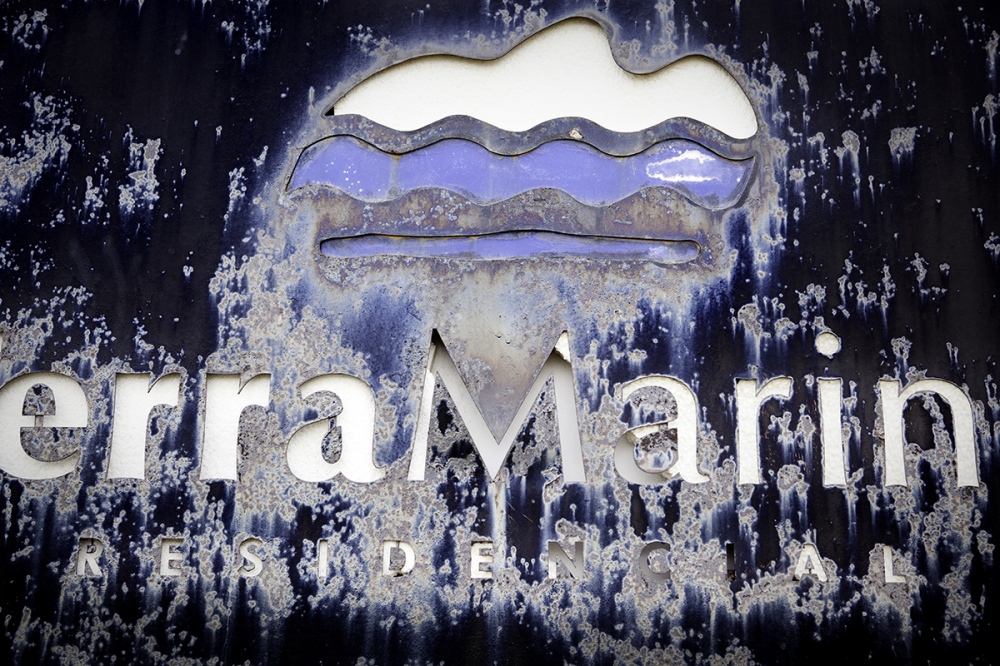 Entry signal of Terra Marina urbanization, in Finestrat (Alacant). The Alacant coast in Spain was in the last decade one of the symbols of construction boom. 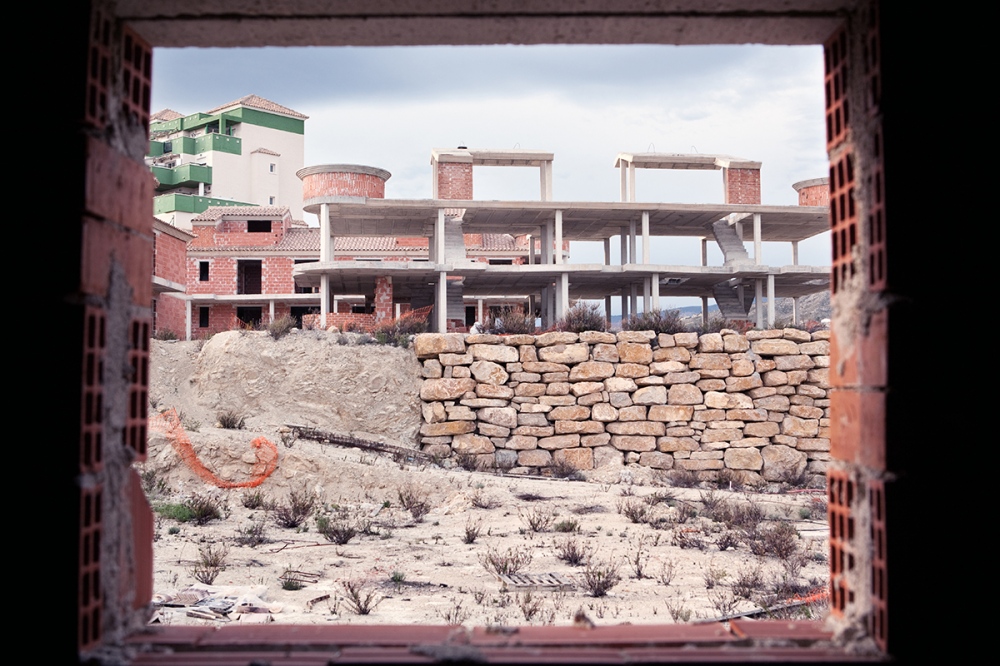 Buildings left half-built, in a urbanization in Finestrat (Alacant, Spain). 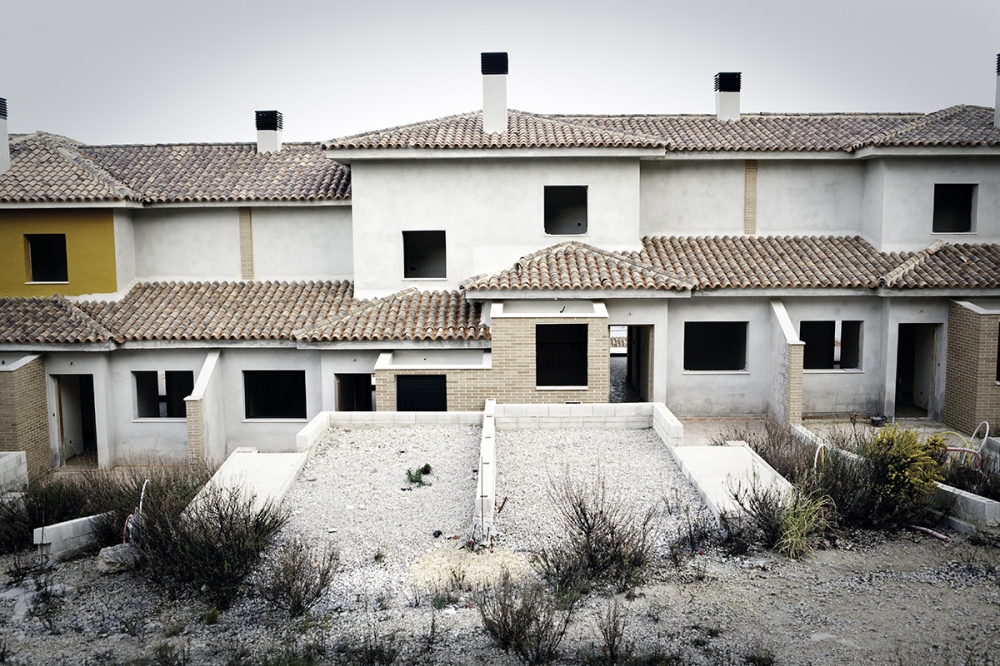 Buildings left half-built, in the urbanization El Mirador de Polop (Alacant, Spain). Since 2008, numerous urban development companies have gone bankrupt, many with debts that have not been able to afford. 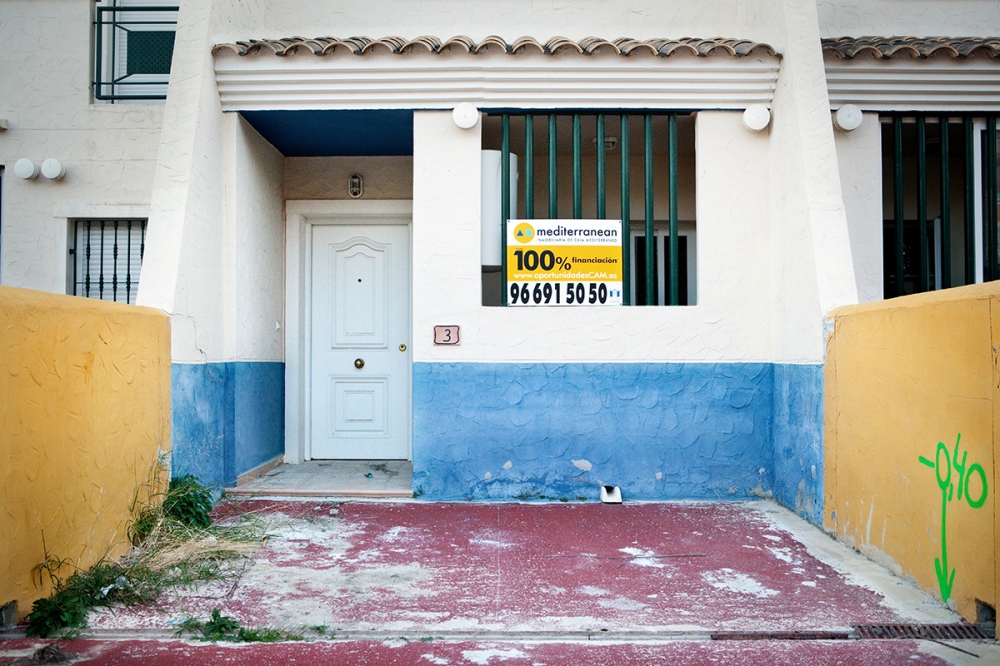 House For sale by the now defunct Caja de Ahorros del Mediterraneo (CAM). The housing market crash and its debts have dragged numerous local banks to the bankruptcy in the Spanish state. Urbanization in Sella (Alacant). 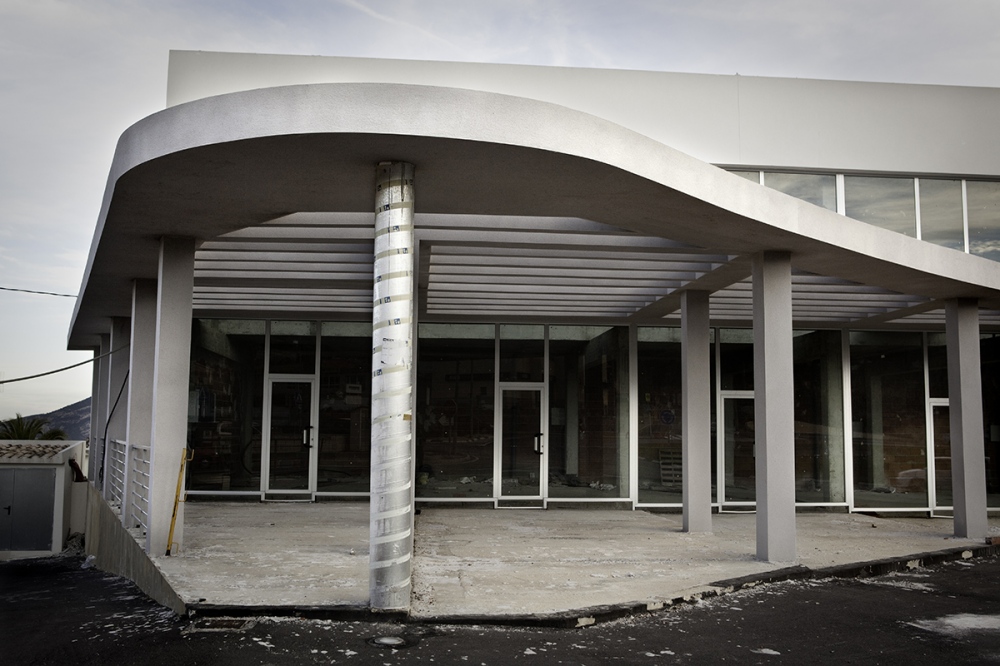 View of a half-built building, which was destinaded to be commercial basement. 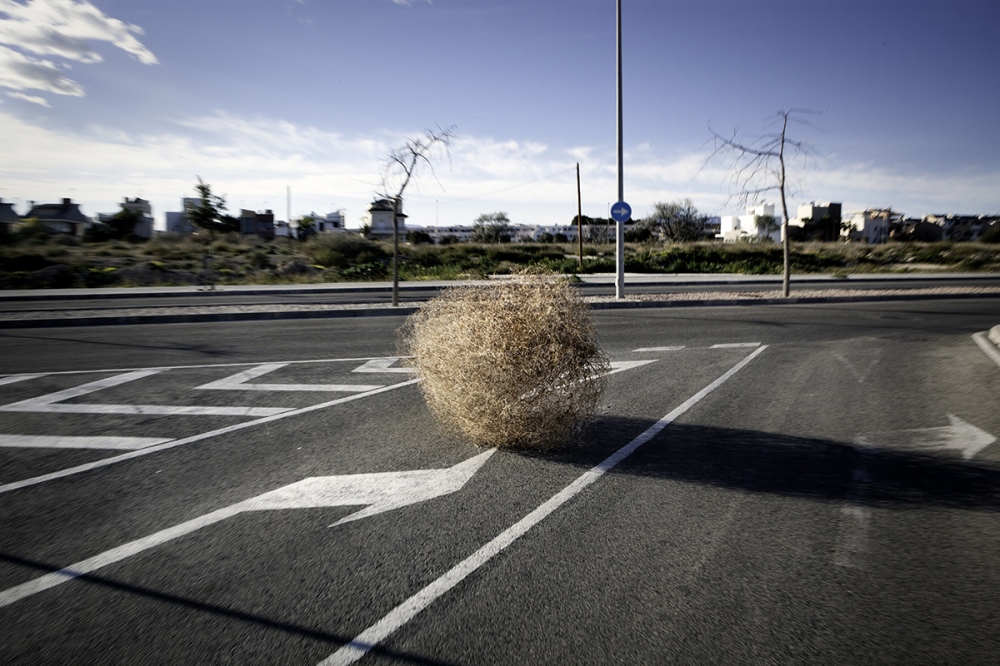 A tumbleweed passes through the deserted streets of an empty urbanization. 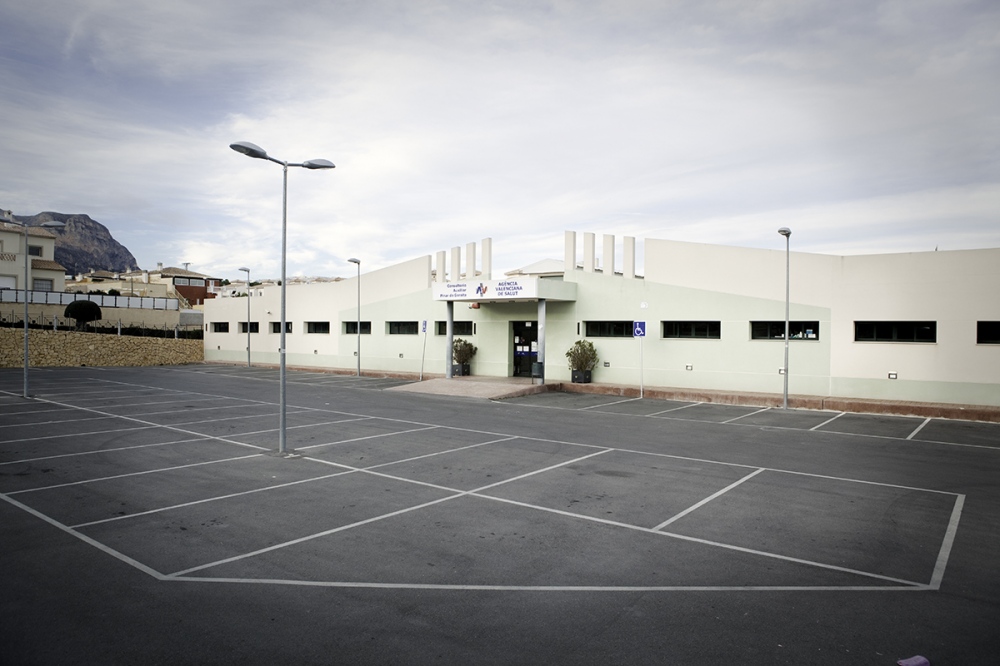 Health Care Center in a urbanization in La Nucia (Alacant). In times of uncontrolled urban development grown, municipalities granted services like health centers, schools or community centers to many urbanizations which are today semi-deserted. 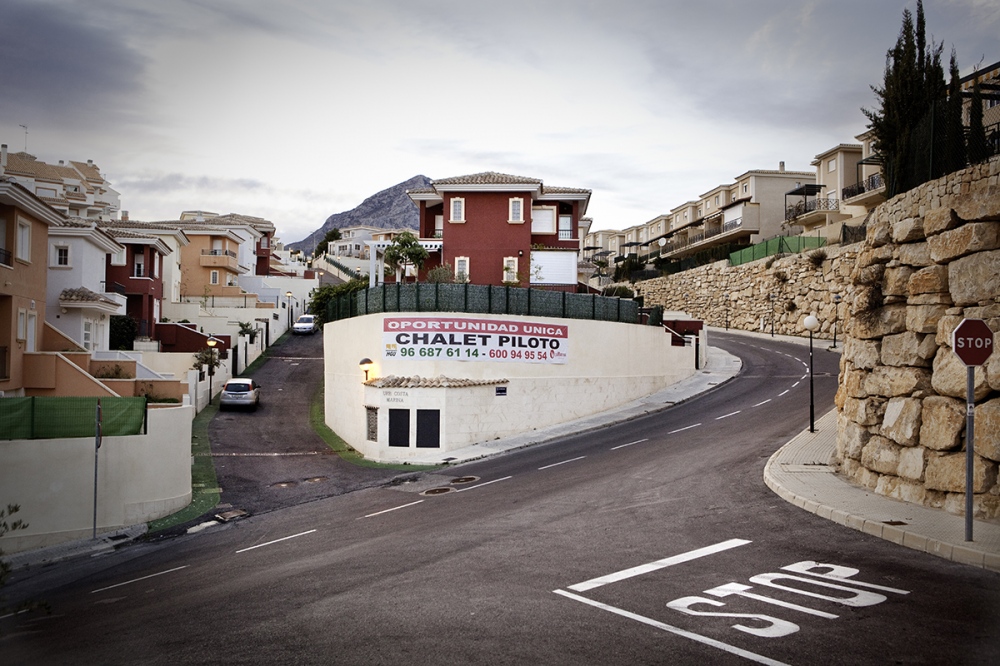 Signals of a stop in a new urbanization in Polop de la Marina (Alacant). 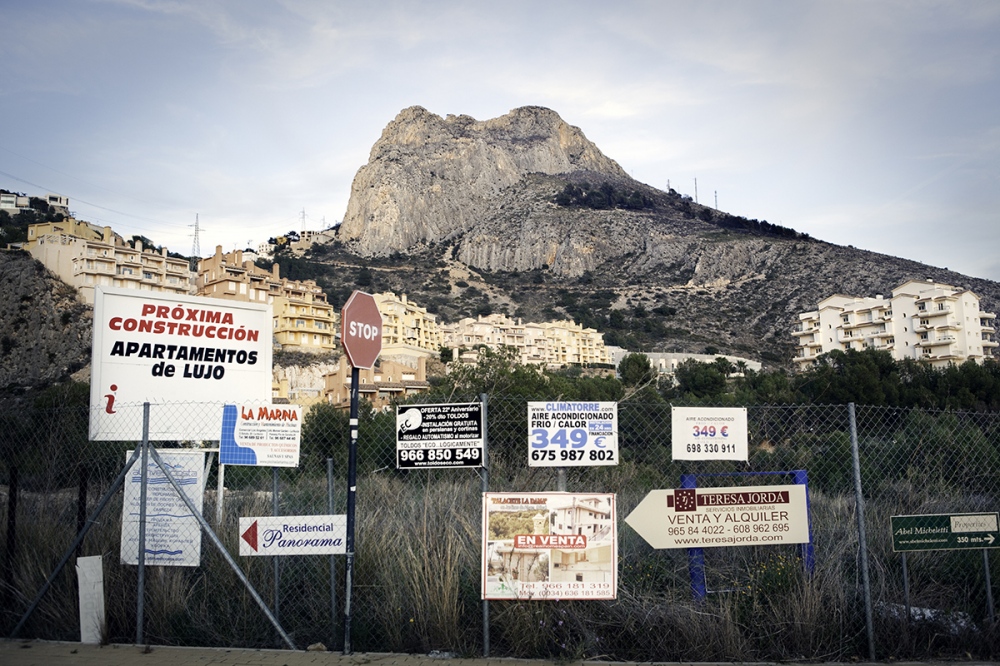 Old advertisements of luxury development in the mountain of Altea (Alacant). 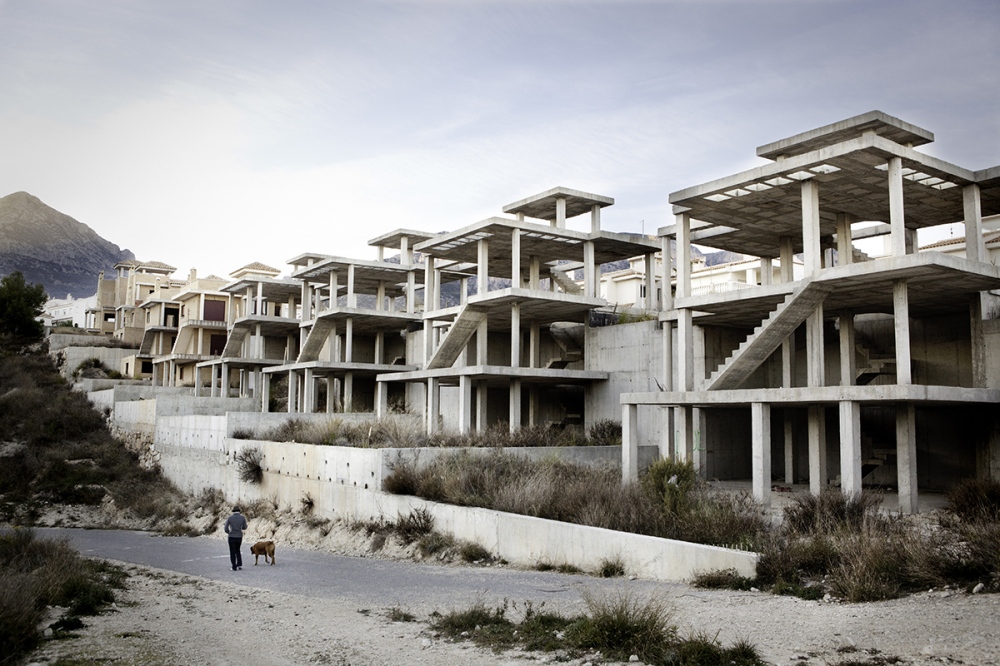 A woman walks between structures of half-built buildings, in La Nucia (Alacant). 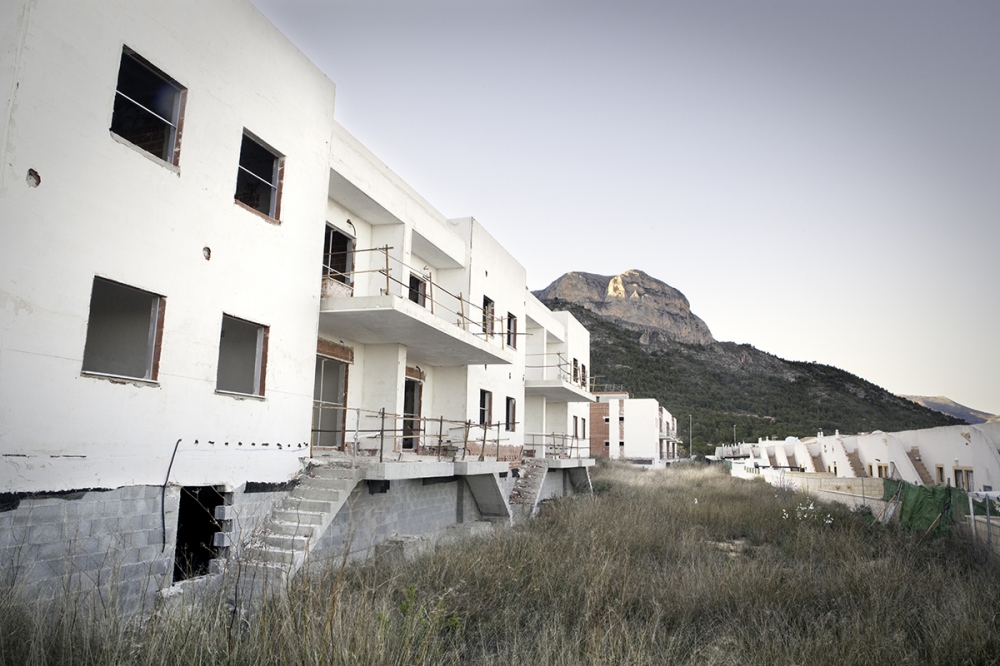 Group of uncompleted buildings in a urbanization in Polop de la Marina (Alacant) . The drop in prices and demand makes banks not interested in completing the inherited developments. 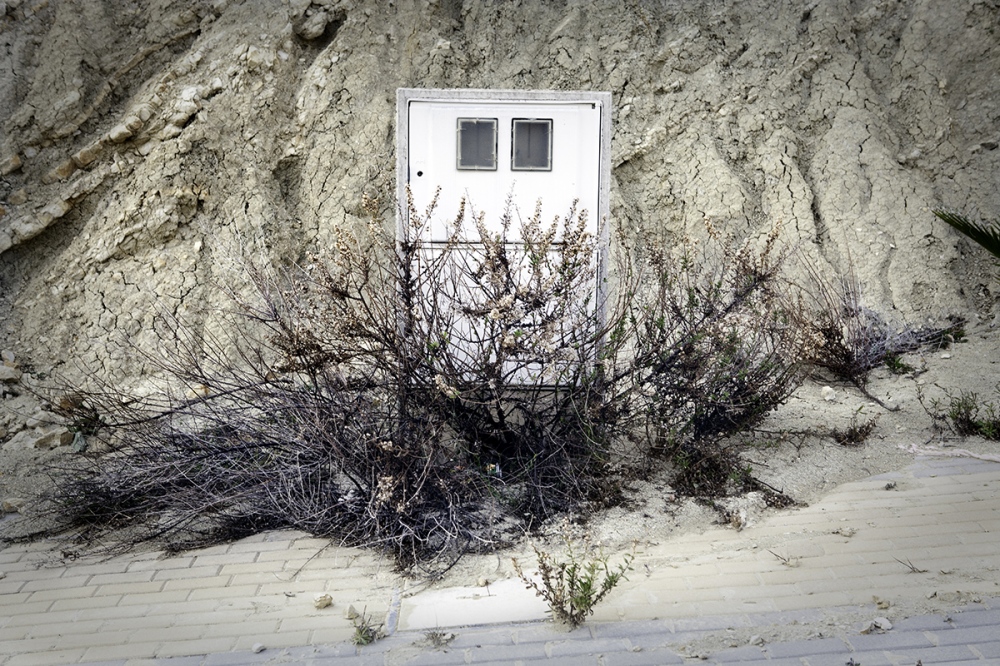 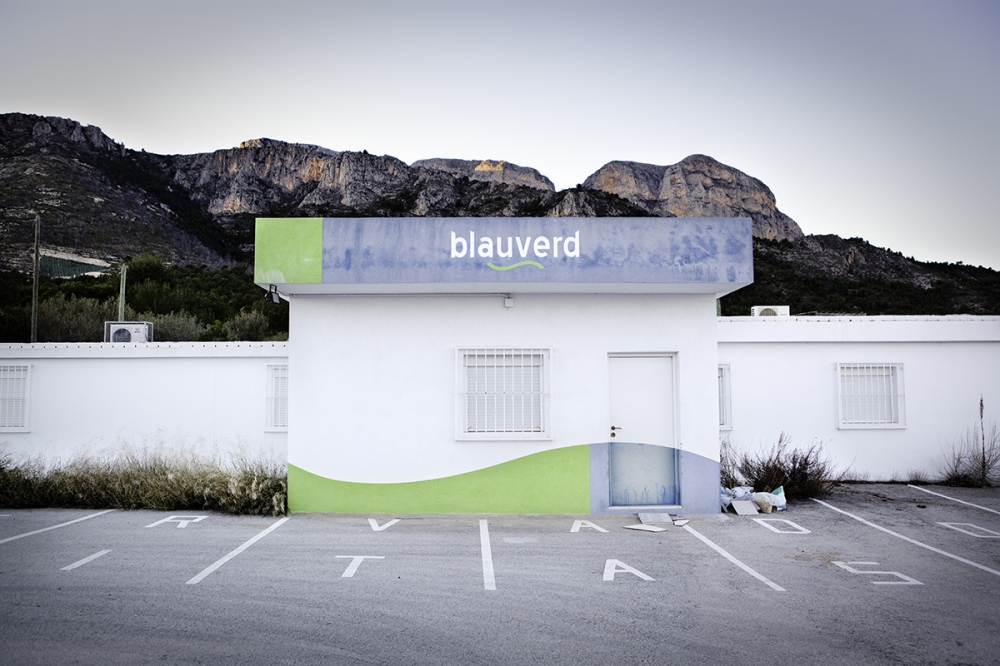 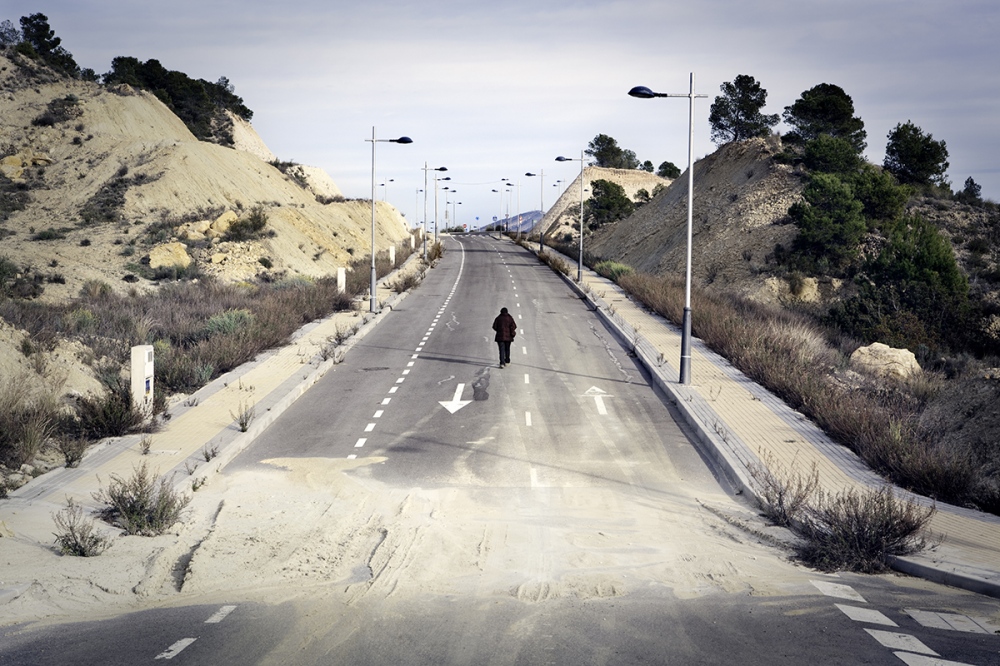 A person walks away in an abandoned development project. Finestrat (Alacant). 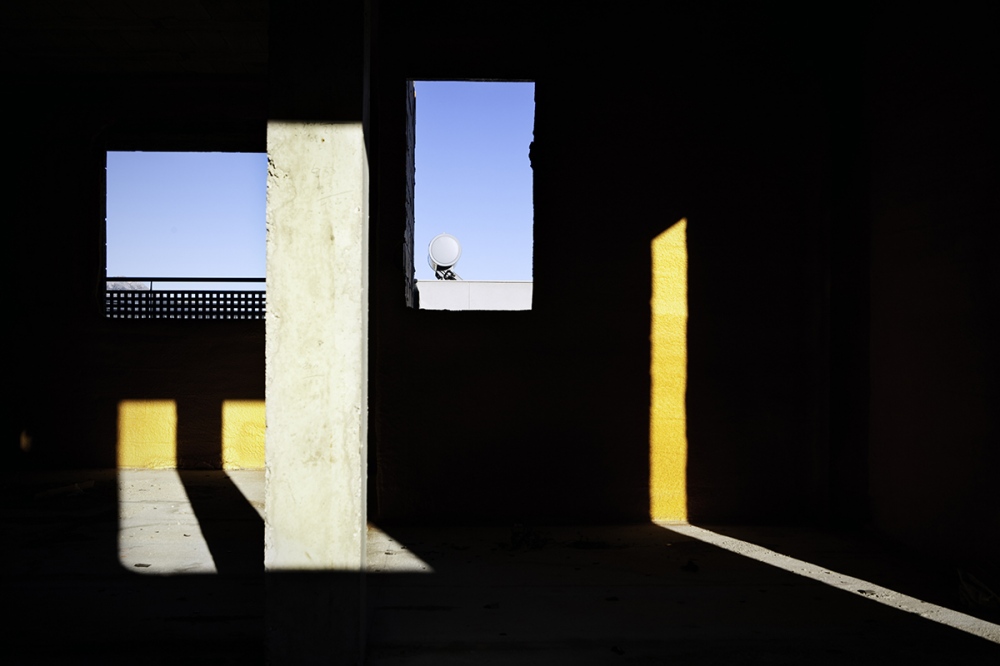 Interior of a half-built building in a urbanization. 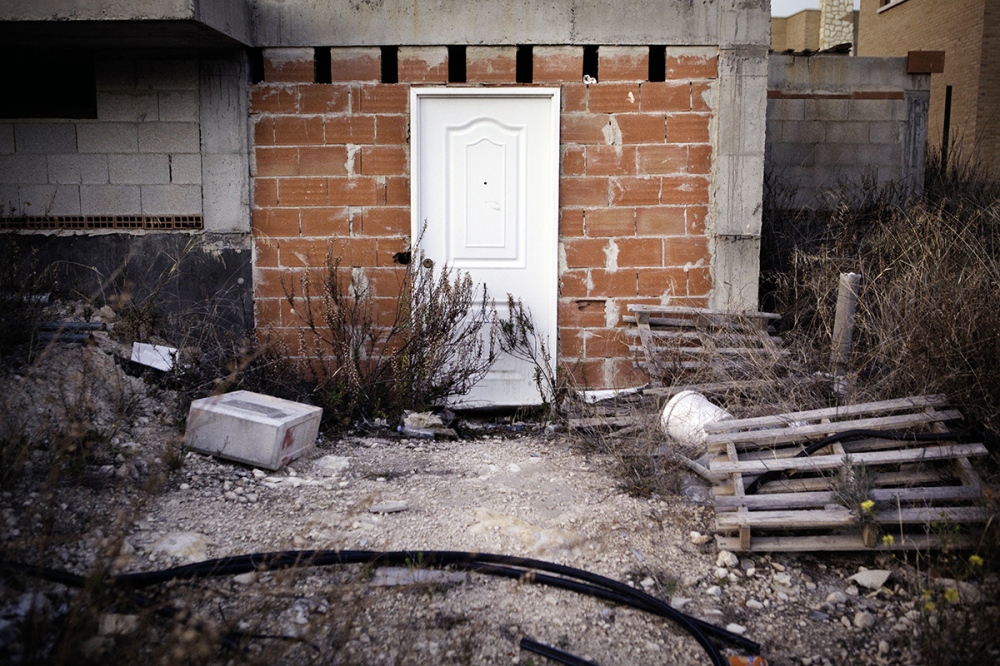 Entrance to a uncompleted abandoned building. 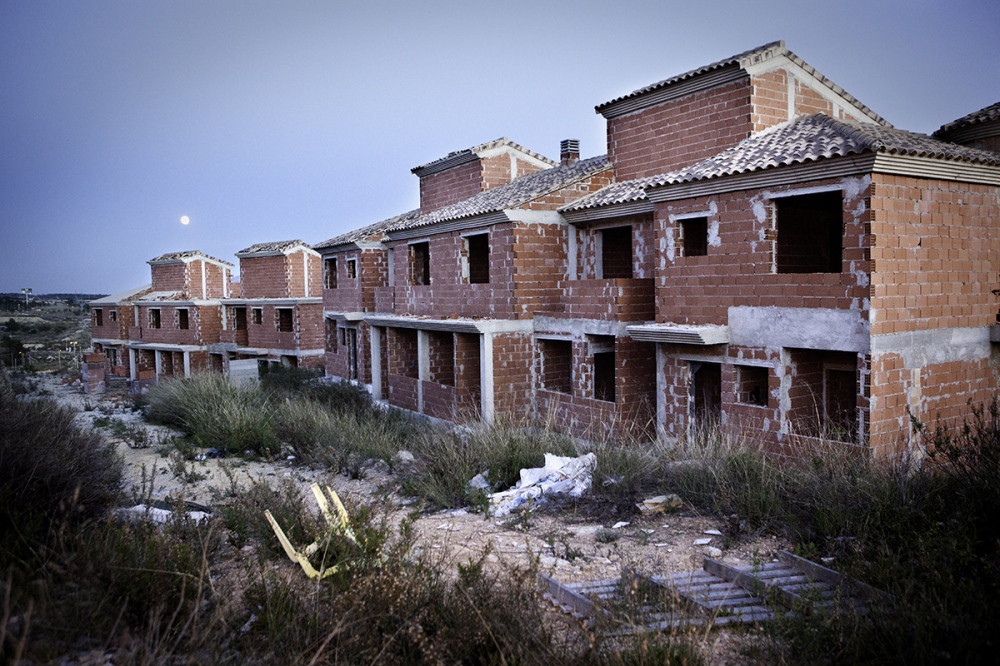 Block of buildings left half-built. Some experts estimate that out of the crisis will not occur until the banks can provide an outlet for all the buildings inherited after developers bankruptcy. 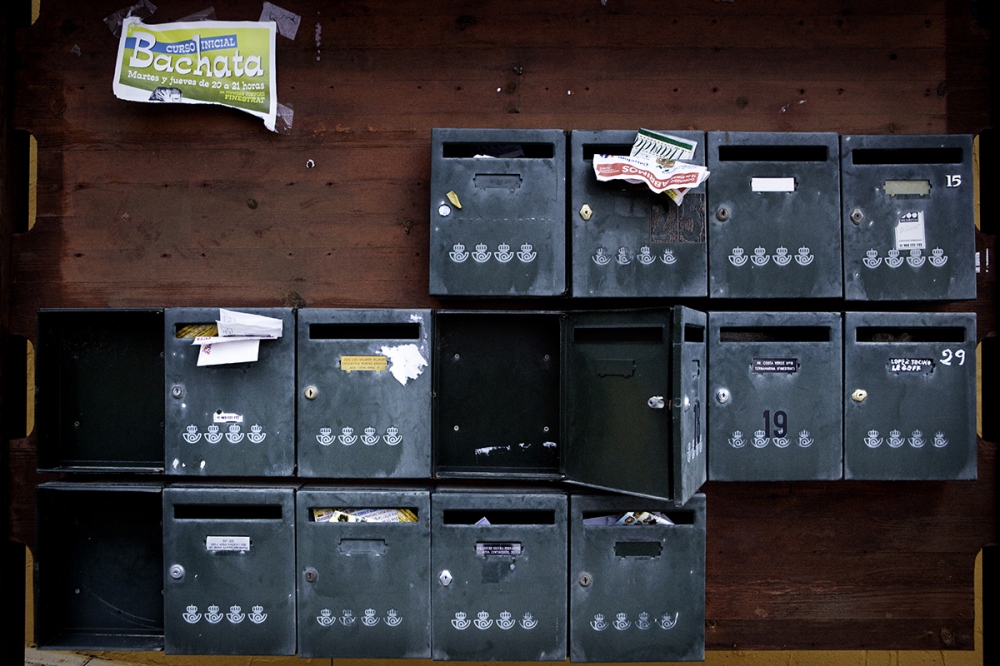 Group of mailboxes in an abandoned and almost depopulated urbanization, in Sant Joan city (Alacant). 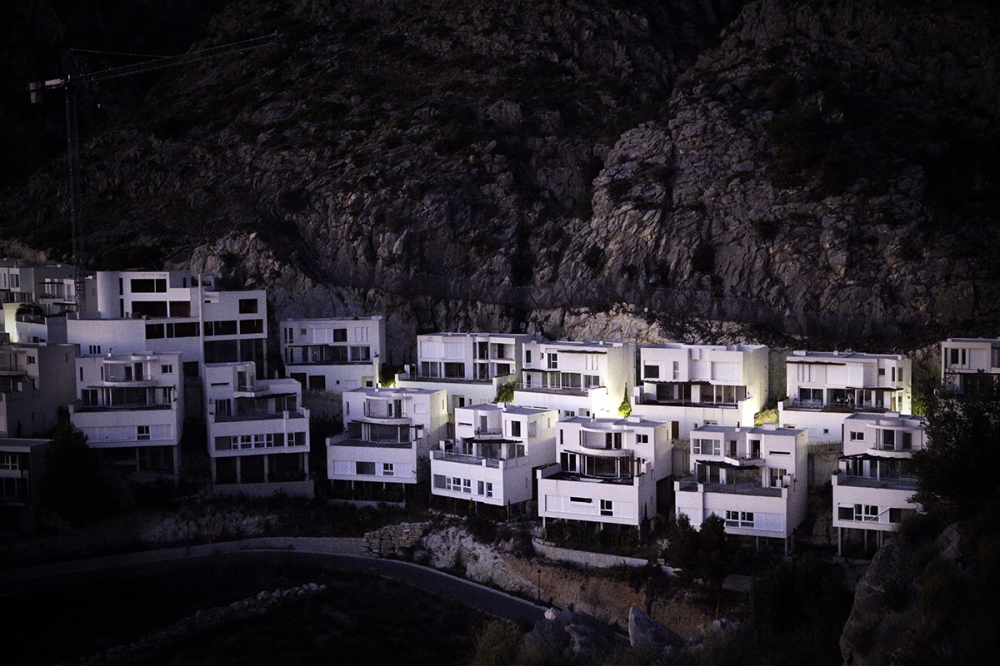 View of empty house in the dark in Sierra de Altea. Overproduction of homes above the actual demand is one factor that has led to urban collapse. Altea (Alacant). 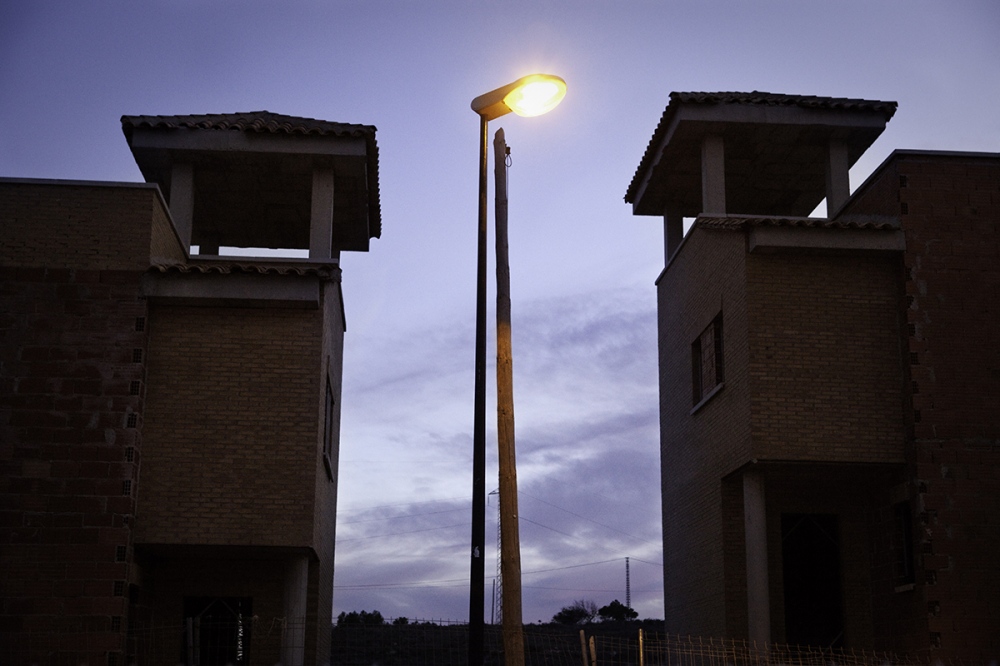 Night scene in an unfinished urbanization.

CORPSES OF CEMENT
When Urban Developers Ruled the Earth.
Apocaliptic landscape after the end of the housing bubble in Spanish state.

According to the chronicles, the Spanish housing market went in early XXIth century through an exceptional period of economic growing. Historians often refer to this period as the Bonánzico/Welfaric. Land was owned and operated by forms of life now extincted; mainly, it was ruled by the reptile species known as urban developer. The urban developers were characterized by hoarding the maximum ownership possible of land, applying a constant rise of the prices to other species if they wanted to establish there.

In mid-2007, however, came the abrupt cessation of this form of domination. The great extinction, the end of an era...

What caused this mass extinction that marks the end of the Bonánzico/Welfaric and the beginning of Crisogene period? Scientists and other expert still haven'nt find a clear answer, nor any responsibilities have been defined about it. You might even get to believe that the housing bubble hatched because of uncontrollable external factors such as the explosion of a supernova, or a period of great volcanic activity. In any case, the most common forms of life at the time began to die. First were the developers, dead in early Crisogene. With them disappeared the great saurian that had dominated the territory during the Bonánzico period: cranes, excavators, trucks, bulldozer... and all of the raw construction materials. Later it was banks who fell ... Everything then became barren, abandoned, deserted as all these species were disappearing from the face of the earth.

The resulting picture in the Spain of Crisogene era transports us, therefore, to a post-apocalyptic scenario. Still today numerous fossils can be seen around the territory. They belonged once to shiny new buildings, which were also surprised by the urban bubble burst, and now lie inert. Corpses of cement, with gigantic skeletons.

However, from today's perspective, most of the experts consider the end of Bonánzico era, in early  XXIth century, as a positive happening. The Crisogene and the subsequent periods, as it has happened before after other major extinctions of dominant species, were a key factor for the mammals to quickly diversify and evolve as a species.