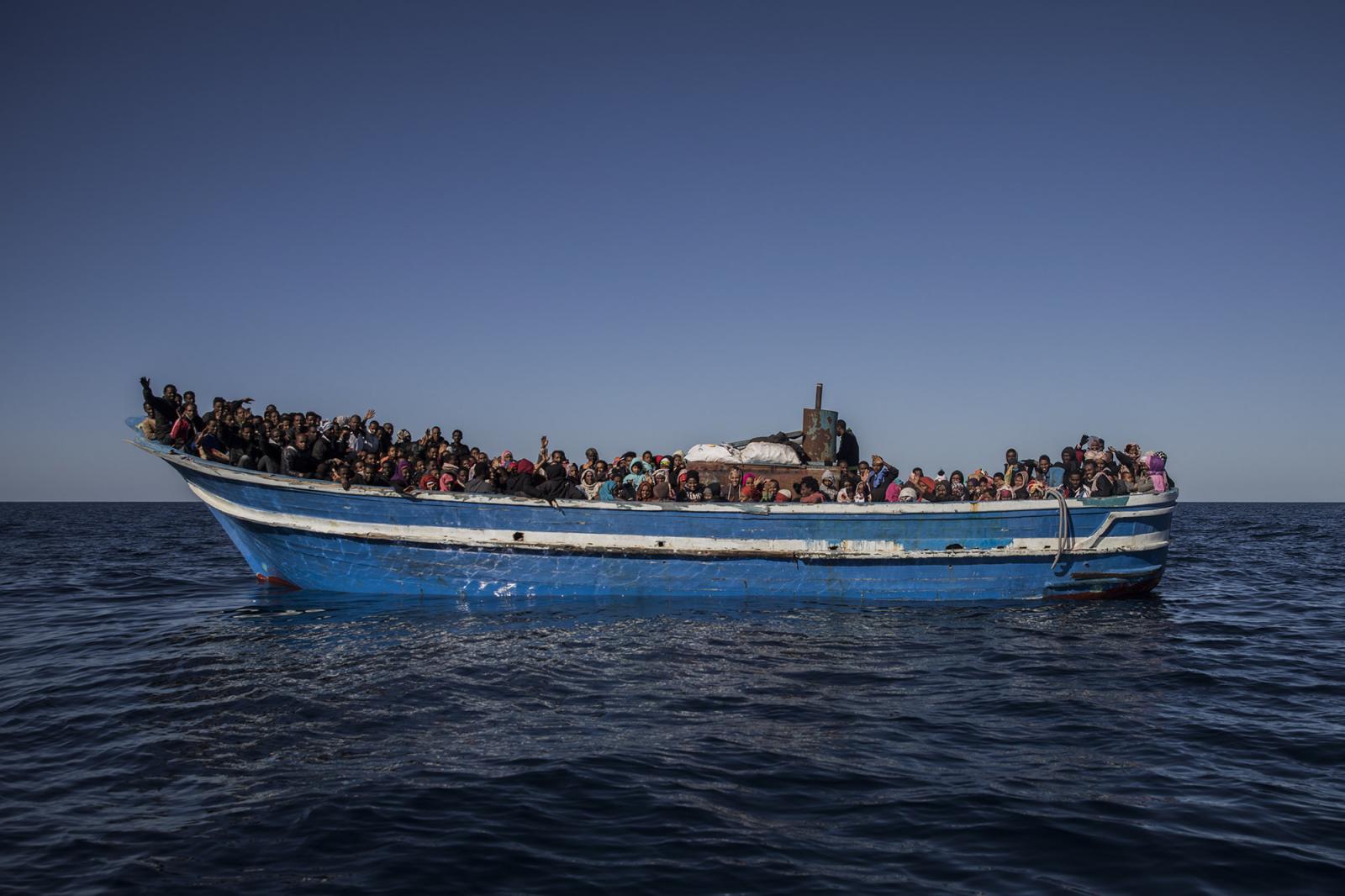 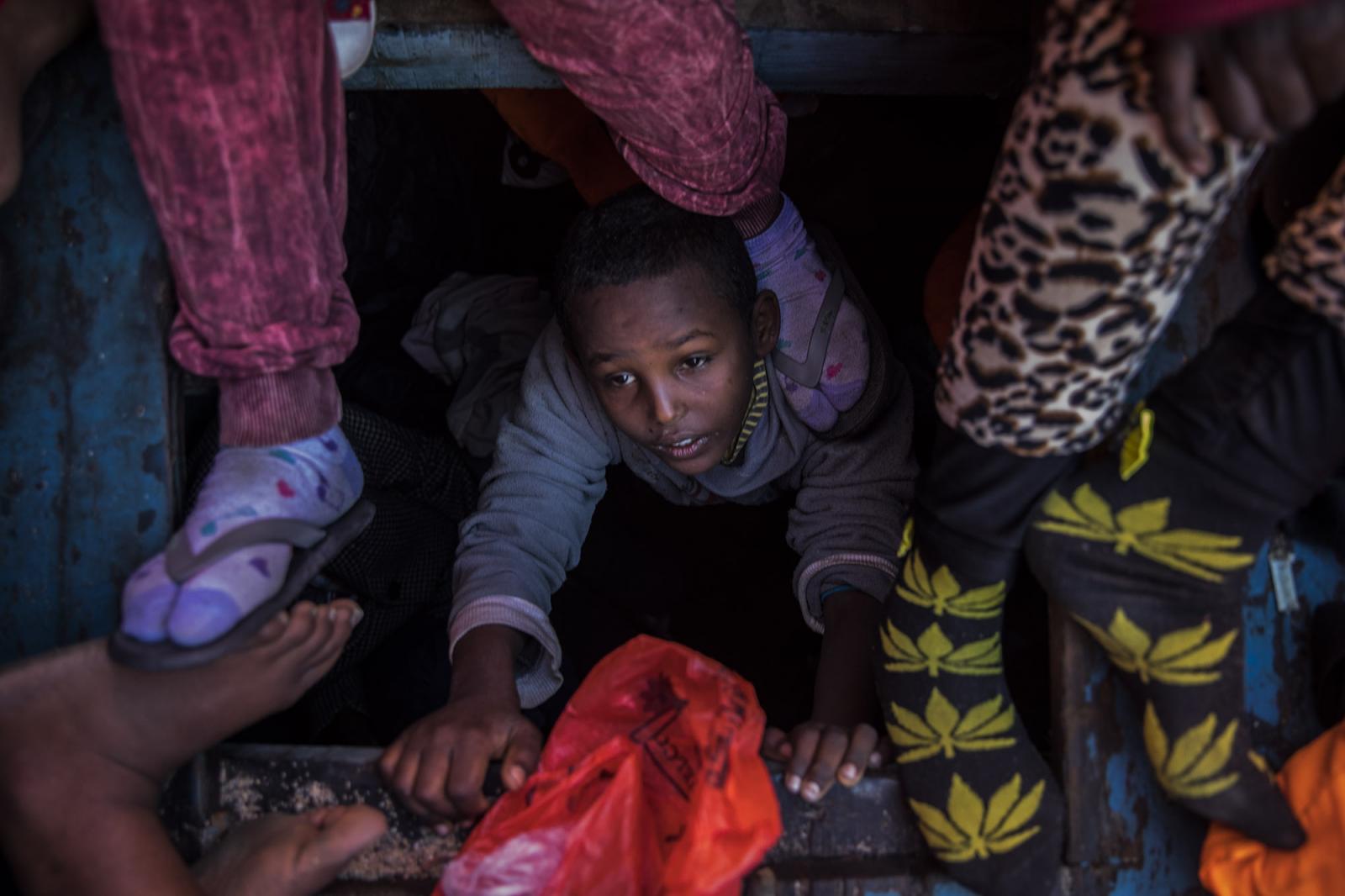 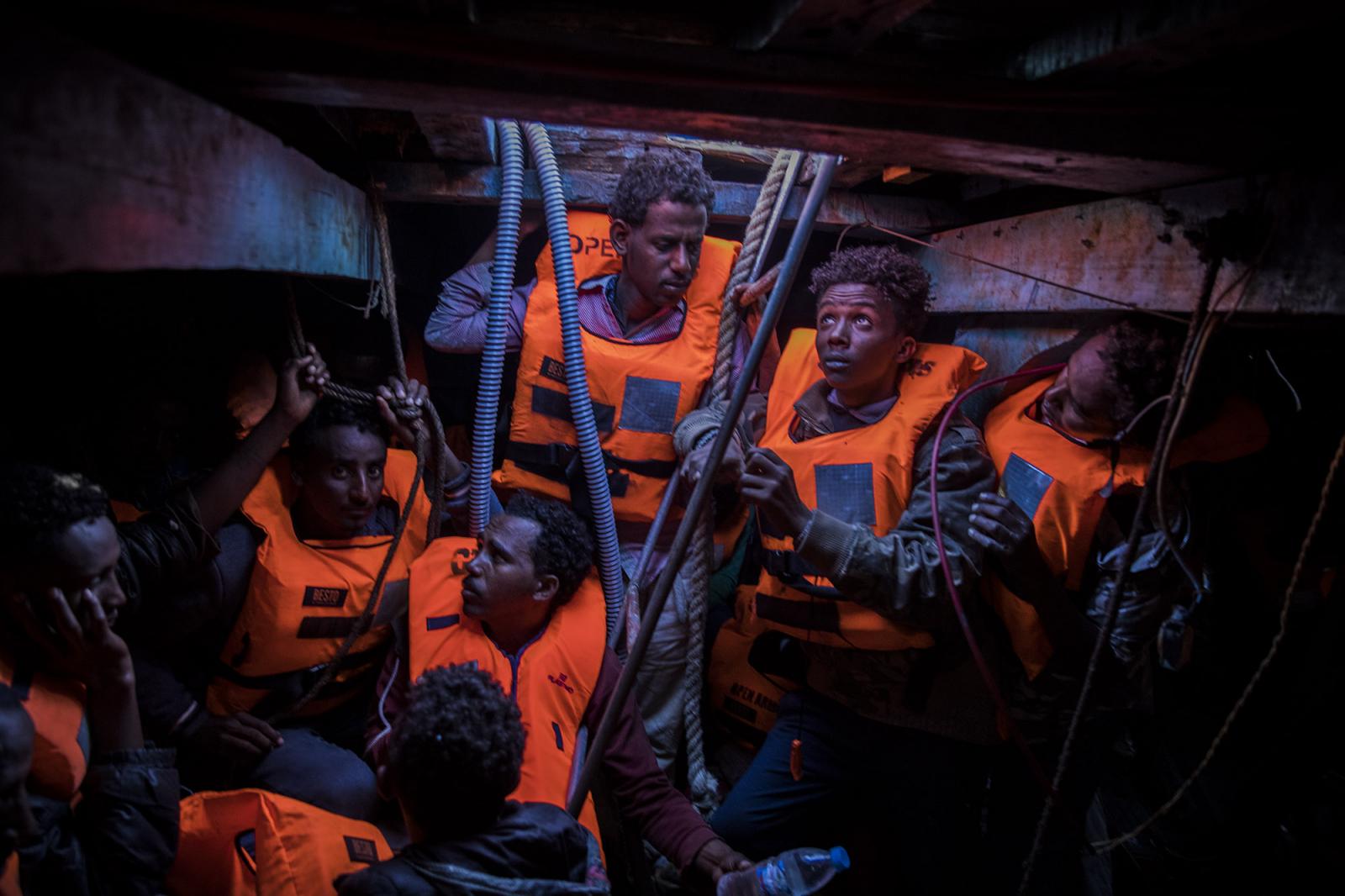 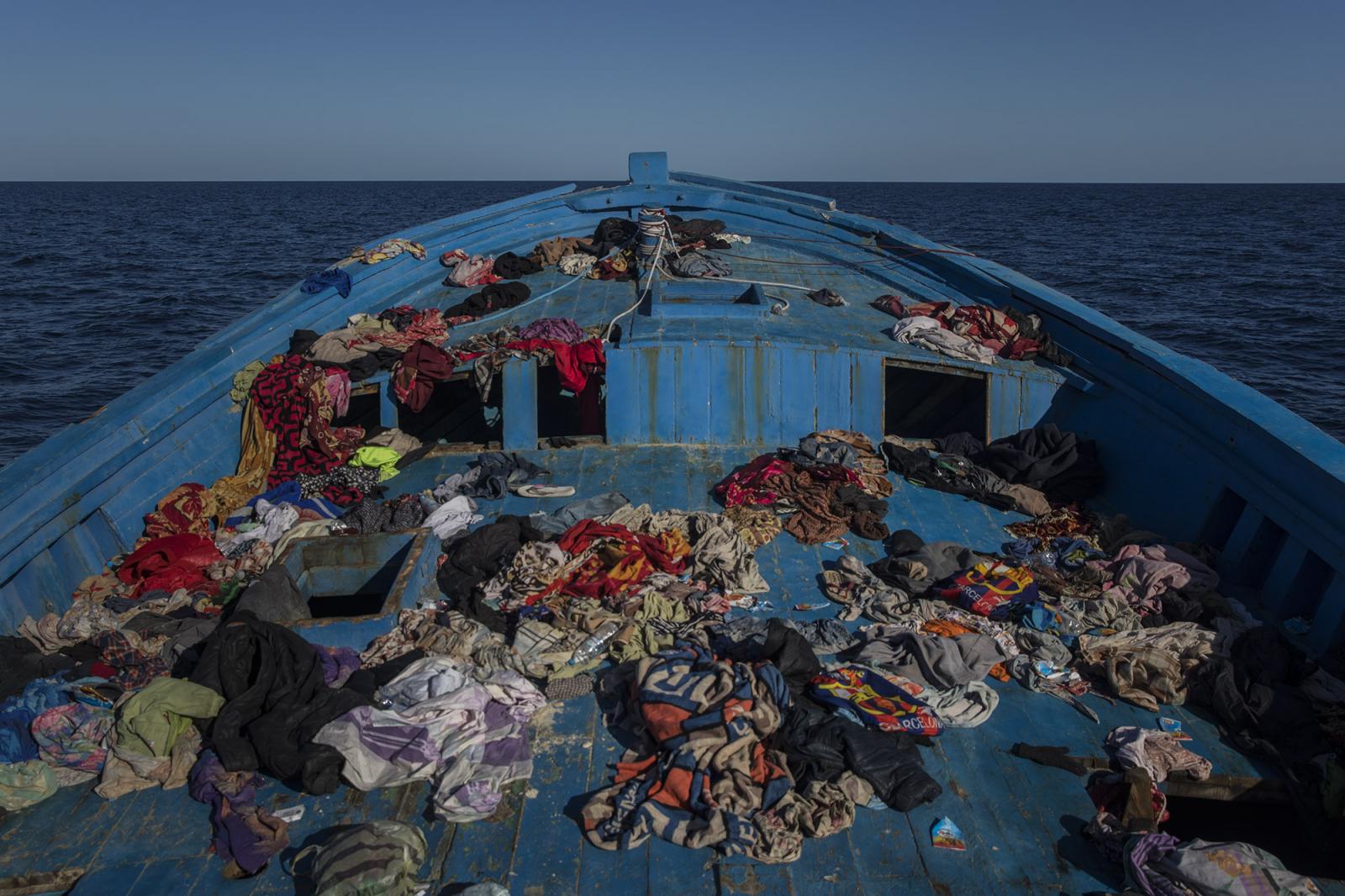 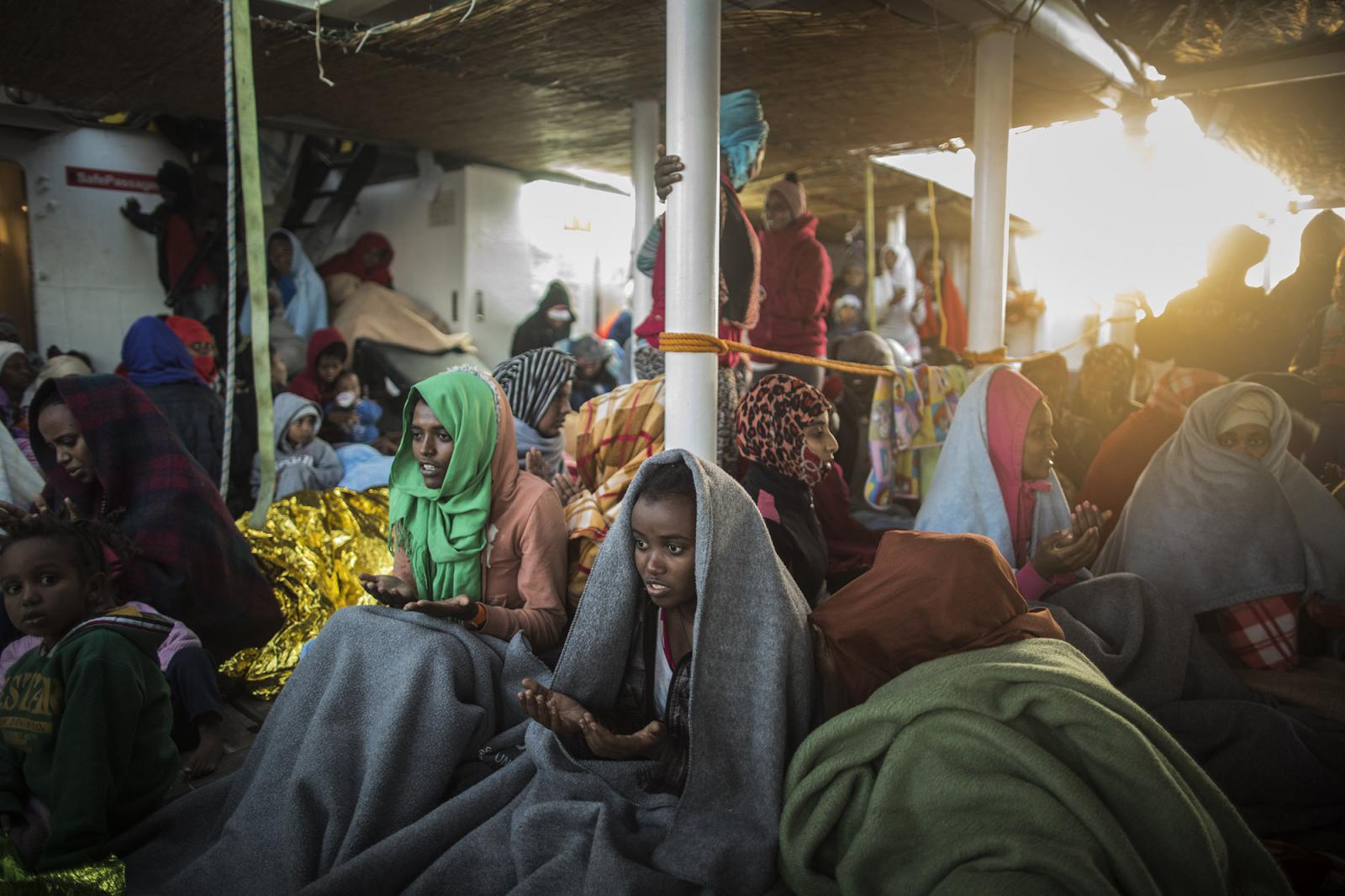 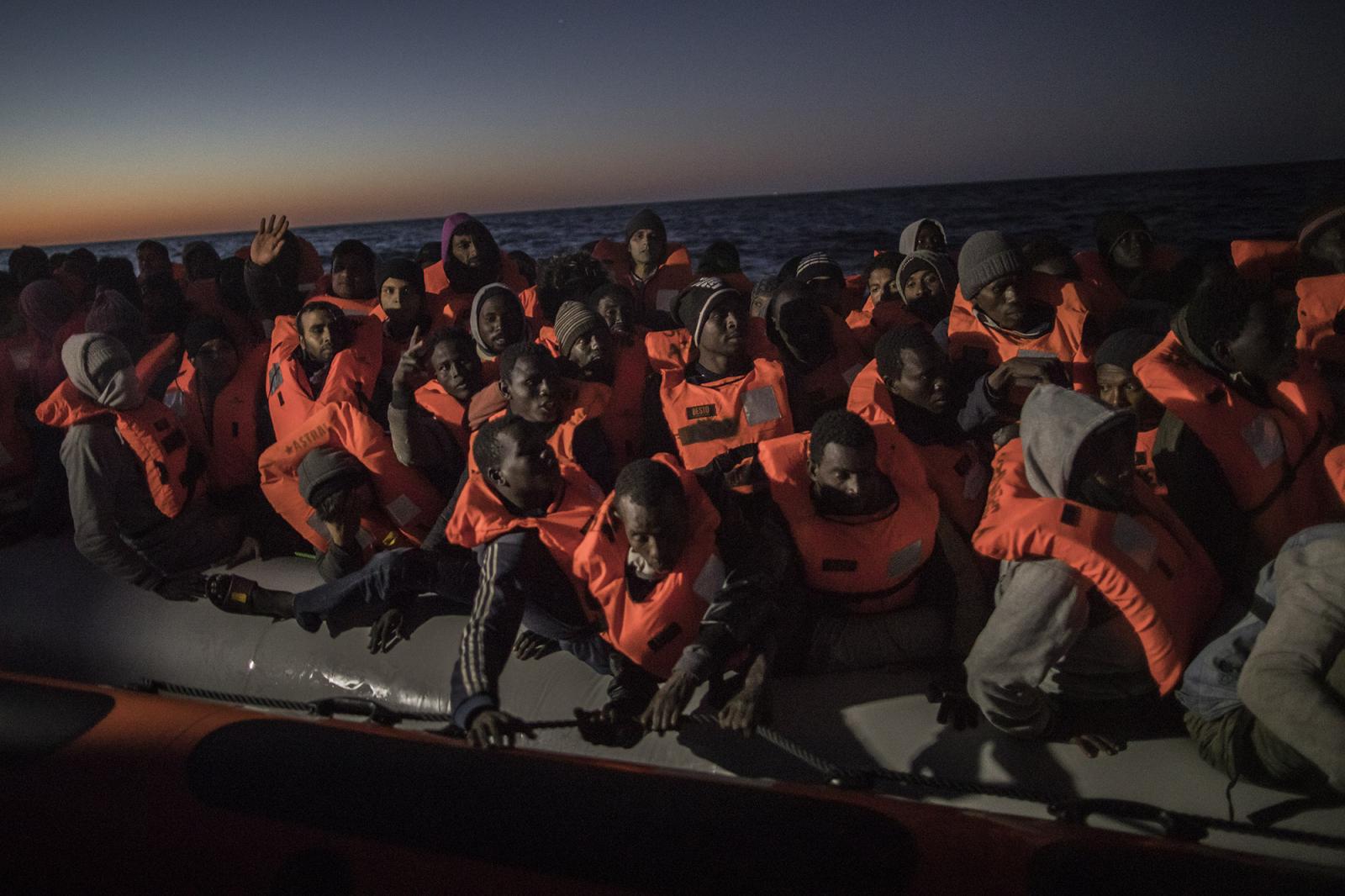 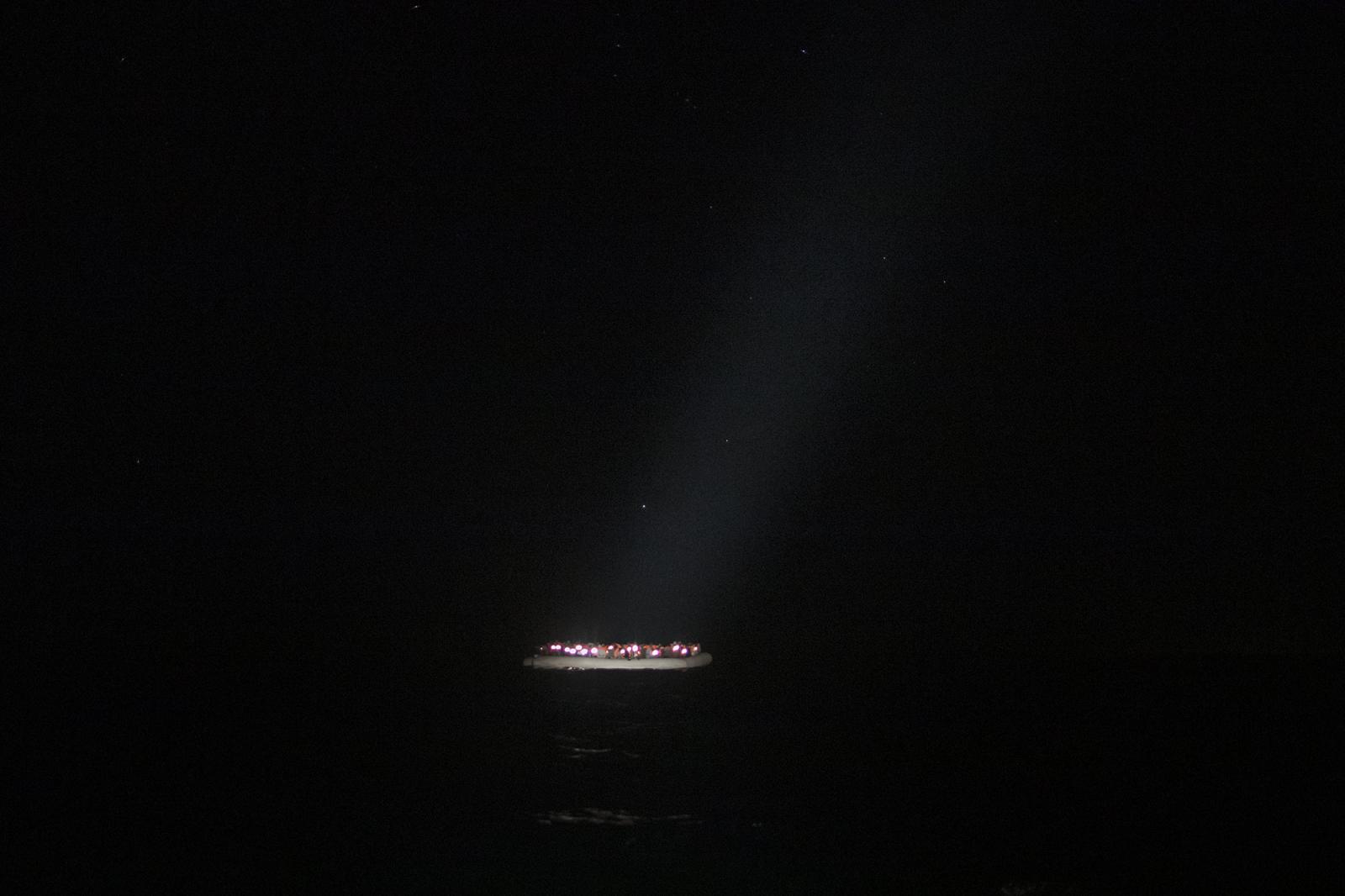 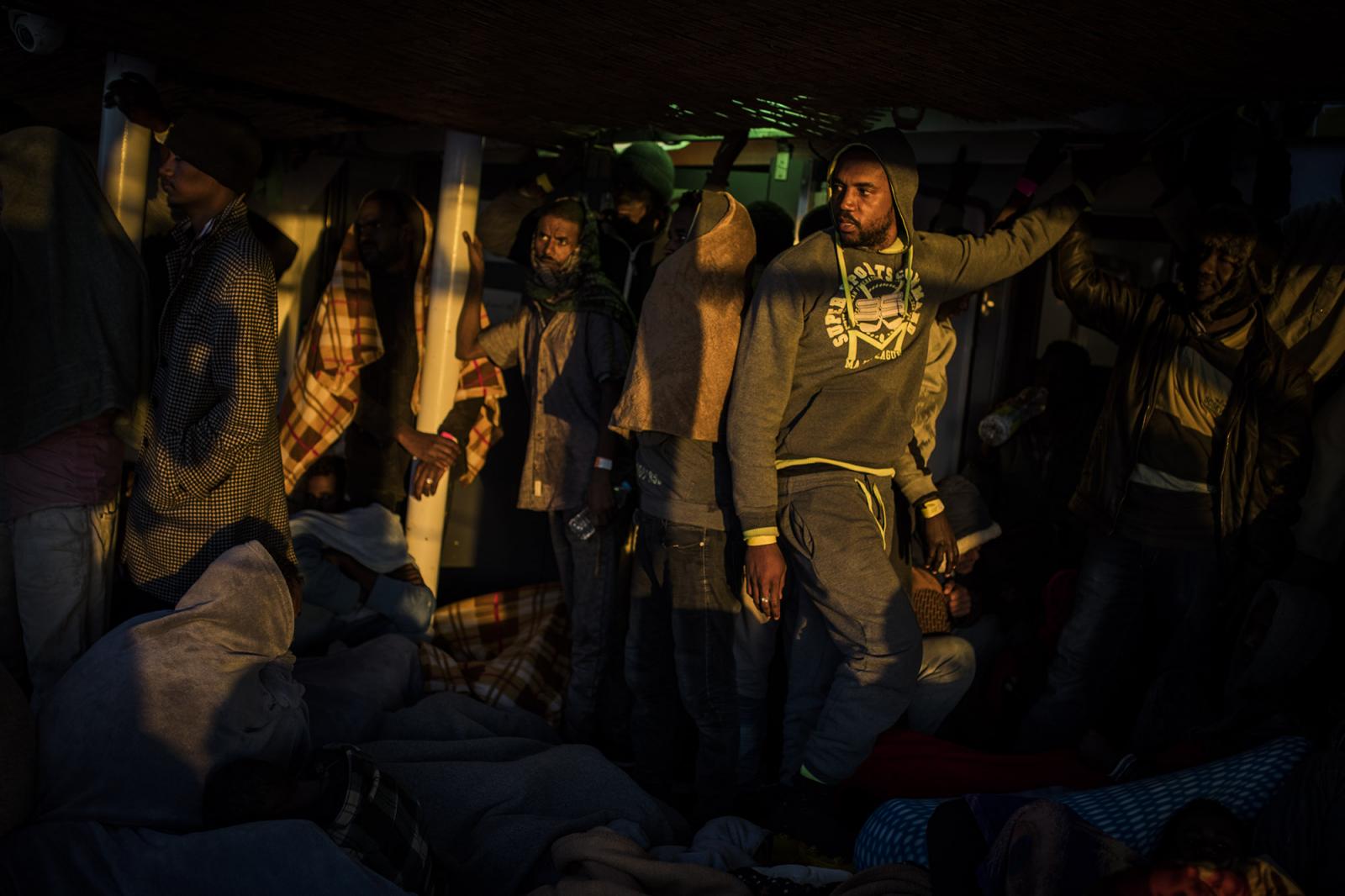 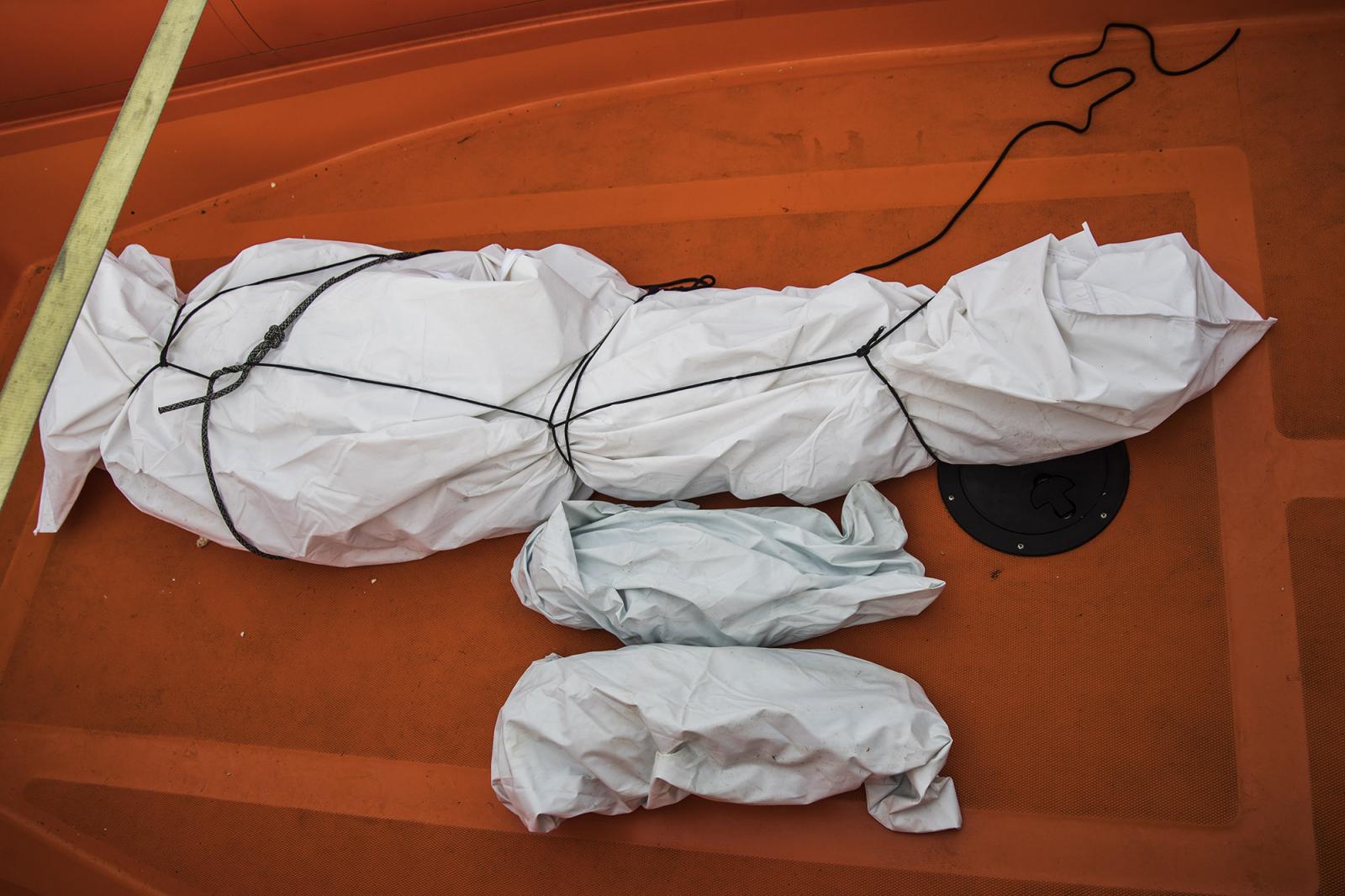 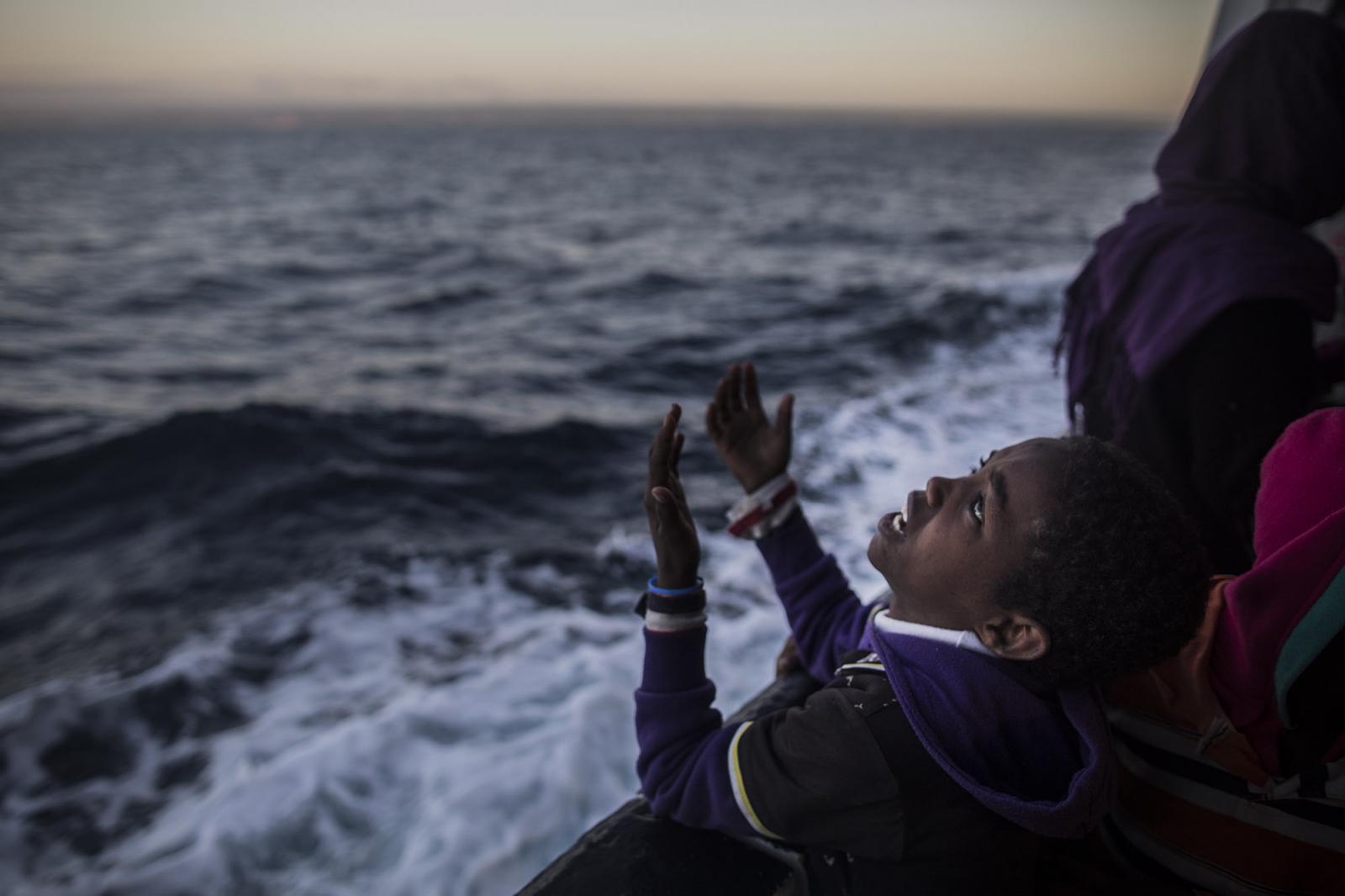 Private Story
MISTRAL
Copyright Santi Palacios 2022
Updated Jan 2022
Location Mediterranean sea
Topics Documentary, Editorial, Journalism, Photography
Mediterranean sea: Italy, Malta and Libya | 2018
In January 2018 a rescue team set off for mission number 39, as part of the proactive Spanish NGO Open Arms to the central Mediterranean Sea. The Mediterranean crossing between Libya and Italy remains the deadliest clandestine migratory route on the planet.
The aim of the Open Arms rescue vessel was to patrol the waters of the SAR (Search and Rescue) zone off the coast of Libya, with the coordination of the Italian navy, and intervene if necessary by performing a rescue in international waters.
No sooner did they reach the SAR zone, at 10:00 on the morning of January 16, when a packed wooden boat was sighted very nearby bearing 450 people, the majority of them from Eritrea. When the rescue team arrived, they discovered that a baby had already died on board. Several hours later another young boy lost his life after unsuccessful attempts at resuscitation.
The rescue ended late afternoon. The 450 migrants had been taken on board the Open Arms. The rescue team decided to activate another alert, however, because the coordination centre in Rome had given word of another boat located several miles off. After three hours searching the area in speed boats, the rescuers located the vessel on a rough sea as night was falling. It was a precarious plastic raft carrying some 170 people, the majority from Nigeria, hoping and praying for a stroke of luck.
The day was exhausting, but the worst came after the rescue. The Open Arms called the Italian navy from the bridge to request help. The Open Arms is an old Galician tugboat, a mere 40 meters in length, without the incapable of carrying so many people, and even less so with 5-meter high waves crashing down on it. Among those rescued were new-borns, pregnant women, and men and women in a weak and delicate state after having been locked up, raped and tortured in Libya.
The Italian navy asked the Open Arms to hold on as long as they could because they did not have the capacity to transfer these people to one of their boats. The weather was worse in the Strait of Sicily, preventing the Open Arms from heading towards an Italian port. All they could do was ride out the storm in open waters.
The rescue ship of the NGO Sea Watch came and spent the night alongside the Open Arms. Both ships looked for shelter form the storm by fixing their position off the coast of Tunisia, but to little avail.
By the following day, January 17, the weather had worsened significantly and the waves heaved the Open Arms in the open waters. Everyone –both the rescued and the rescuers- was suffering from seasickness, and water poured over the sides of the boat with each wave that came along, soaking the hundreds of people who huddled together as best they could on deck.
The Italian navy evacuated two priority medical cases, but there was still no solution for the remaining migrants. The coordination between the teams of the two NGOs allowed some 200 people to be transferred from the Open Arms to the Sea Watch, but the squall made for increasingly rough and choppy waters.  They would have to ride out the storm another night. That night, a baby died on board, a new-born who simply could not withstand the harsh conditions that put even the lives of the adults in peril.
On the morning of January 18, the crew of the Open Arms continued to await aid from the Italian navy to transfer the people who were still on board. That help never came. The Sea Watch had set their bearing for an Italian port, but the Open Arms had to continue waiting out the storm, with the arduous task of ensuring the survivors would eventually reach land alive.
Finally the sea calmed, and they were able to steer north. The Open Arms reached Pozzallo port, Sicily, on the morning of January 19 with some 300 survivors and 3 bodies on board. Following hours of waiting and the approval from the Italian authorities, all of the survivors were disembarked and the Open Arms steered south to continue their mission: the maritime rescue of migrants forced to risk their lives to flee from Libya in an attempt to reach Europe.
For any professional inquiry contact here