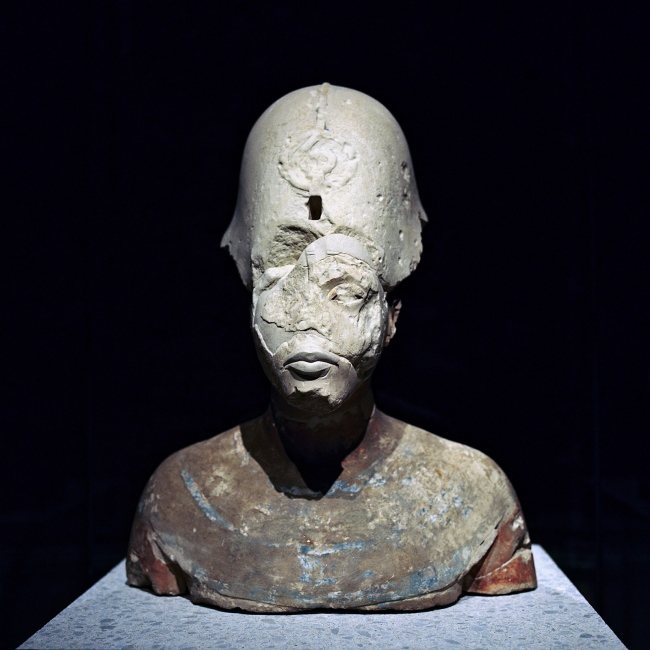 1 of 23 © 2021 Rena Effendi
In Berlinâ€™s Neues Museum, Akhenatenâ€™s bust bears the scars of upheavals ancient and modern. Smashed by the kingâ€™s successors in the 14th century B.C., it was also damaged as a result of being moved during World War II. 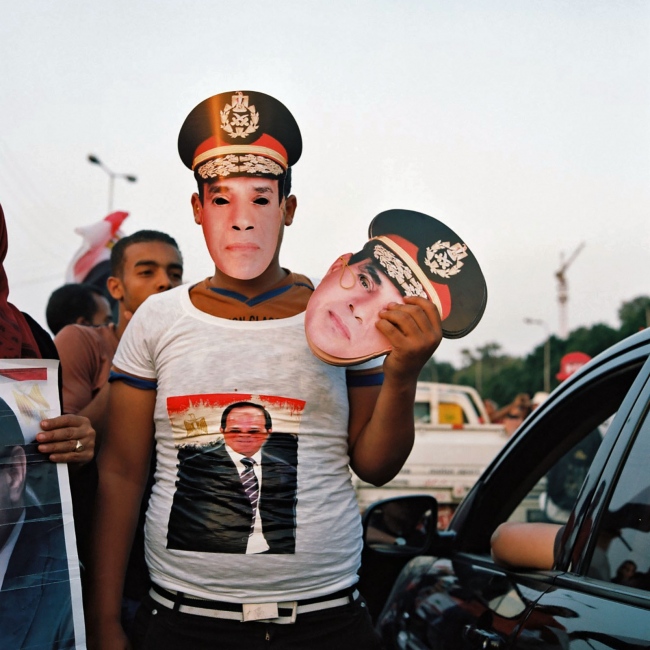 2 of 23 © 2021 Rena Effendi
A Cairo vendor sells masks of Abdel Fattah el-Sisi during Egyptâ€™s 2014 presidential election. Having deposed his predecessor in a coup, the popular former general won 97 percent of the vote. After taking office, he announced the construction of a brand-new capital in the desert east of Cairoâ€”a $300 billion project reminiscent of Akhenatenâ€™s desert capital at Amarna. â€œItâ€™s the same back then; itâ€™s the same now,â€ archaeologist Anna Stevens says. â€œEverybody is running after Sisi because heâ€™s a strong man.â€ 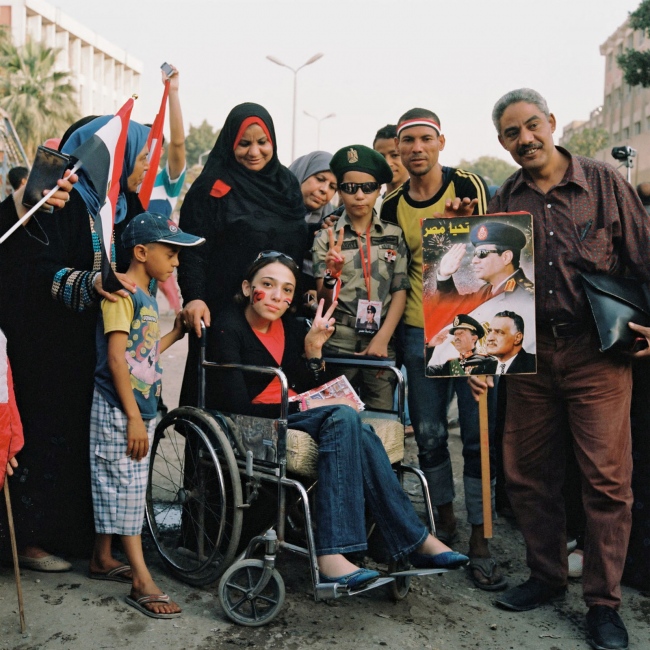 3 of 23 © 2021 Rena Effendi
Parallels can be drawn between the reign of Akhenaten and the election of General Abdul-Fatah el Sisi as president of Egypt after the ouster of Mohamed Morsi in 2013. In a way, President Sisi can be compared to Horemheb, last ruler of 18th dynasty, but formerly chief army commander under Akhenatenâ€™s son Tutankhamun. Horemheb was the first ruler who started violently eradicating Akhenatenâ€™s legacy. 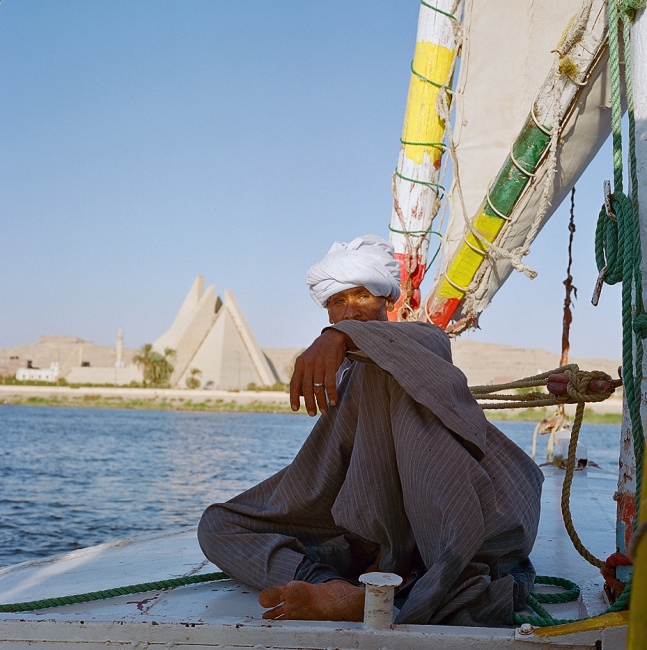 4 of 23 © 2021 Rena Effendi
Mamdouh Abu Kelwa sails his felucca past the unfinished Aten Museum in Minya. Akhenaten needed only five years to build a new capital; the 25-acre museum complex has taken more than twice as long because of political and economic instability. Since the project began, Egypt has undergone a revolution and a coup, and two former presidents have been put on trial. 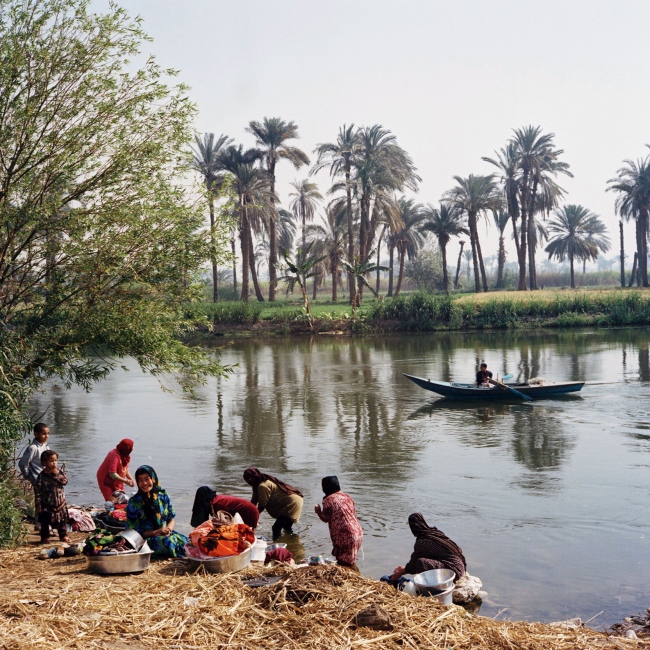 5 of 23 © 2021 Rena Effendi
For villagers in Amarna, the site of Akhenathen's ancient city, life still revolves around the Nile River. In ancient times Akhenaten founded his capital city on a stretch of desert just above the east bank. The site became home to royal palaces, temples, and workersâ€™ dwellings, but farmers tilled land across the river, where the lower banks were inundated by annual floods. To this day most farming settlements are on the western bank of the Nile. 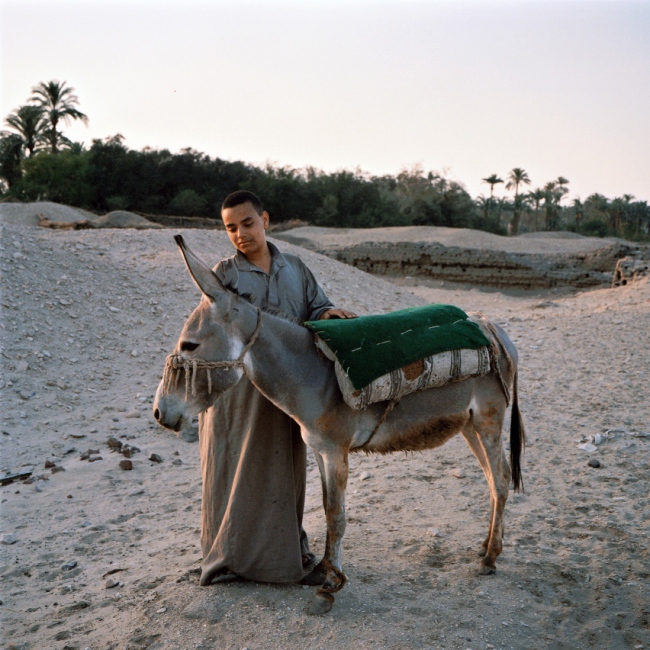 6 of 23 © 2021 Rena Effendi
In order to establish new religious practices and fully abandon the old, Akhenaten moved his capital far into the desert, south of Minya. However today the legacy of Akhetaten city is more imaginative than monumental. The boy and his donkey stand amidst whatâ€™s left of the ancient city (named after Horizon of the Sun) or Amarna as itâ€™s known today. The cityâ€™s mud-brick wall structures can be seen in the background. 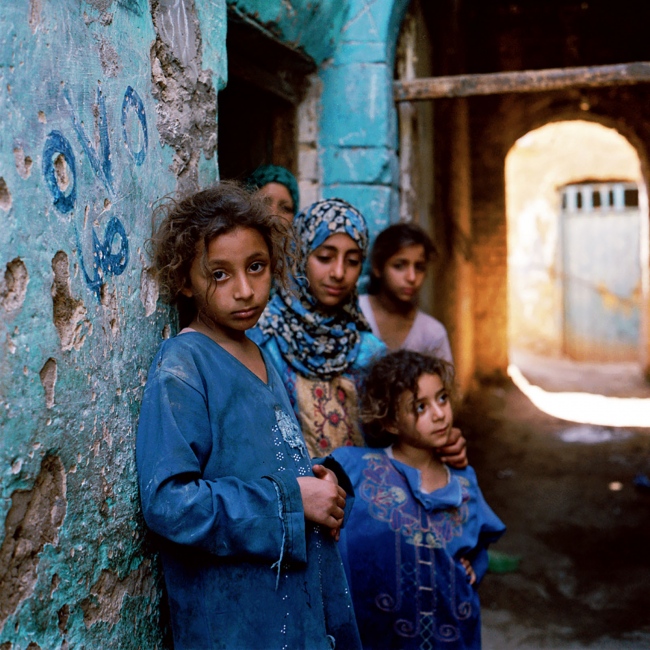 7 of 23 © 2021 Rena Effendi
Mohammed Khallaf, former director of the office of antiquities in Minya, says that when he grew up in Amarna, the surrounding villages were home to only 7,000 people. Now he says they hold more than 17,000. 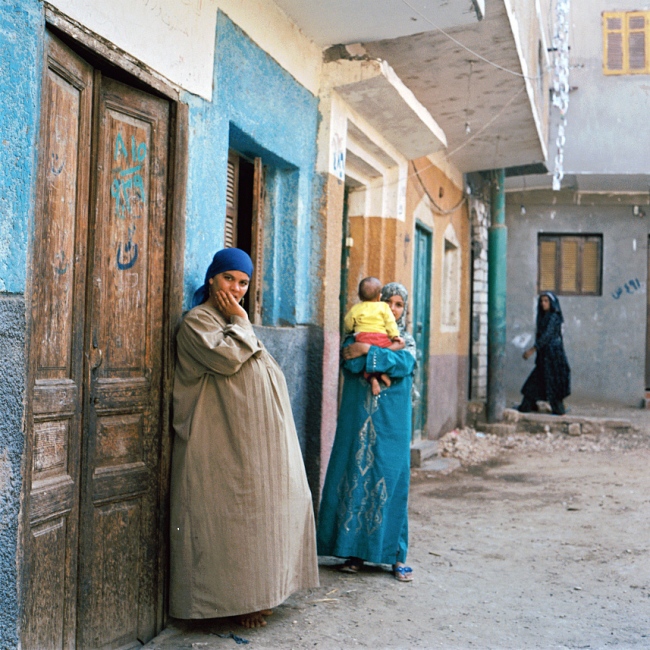 8 of 23 © 2021 Rena Effendi
Street scene in Tel-Amarna, near the site of Akhenathen's ancient city just 36 miles south of the modern-day Egyptian city of Al-Minya. 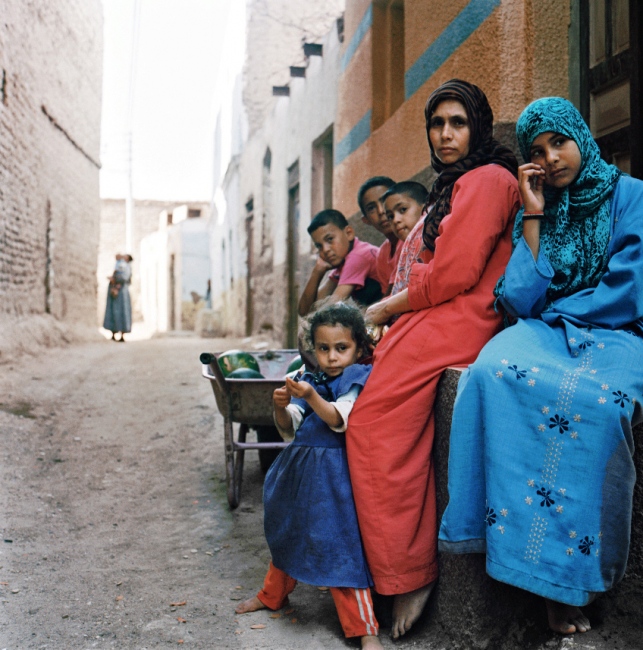 9 of 23 © 2021 Rena Effendi
Akhenatenâ€™s city served as capital for only about 16 years; not long after his son Tutankhamun ascended the throne, he moved the court back to Thebes. Akhenaten had the power and vision to move thousands of people to an inhospitable place of no natural value. However, his city was abandoned shortly after his death, because of its desert location, where drinking water had to be brought in from the river. Rural communities of Tel-Amarna have now sprawled around what used to be a deserted landscape. 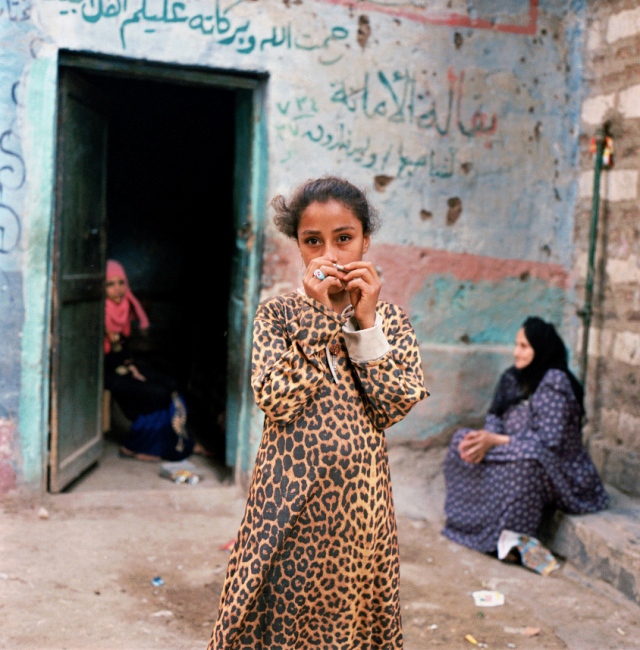 10 of 23 © 2021 Rena Effendi
Street scene in Tel-Amarna, near the site of Akhenathen's ancient city just 36 miles south of the modern-day Egyptian city of Al-Minya. 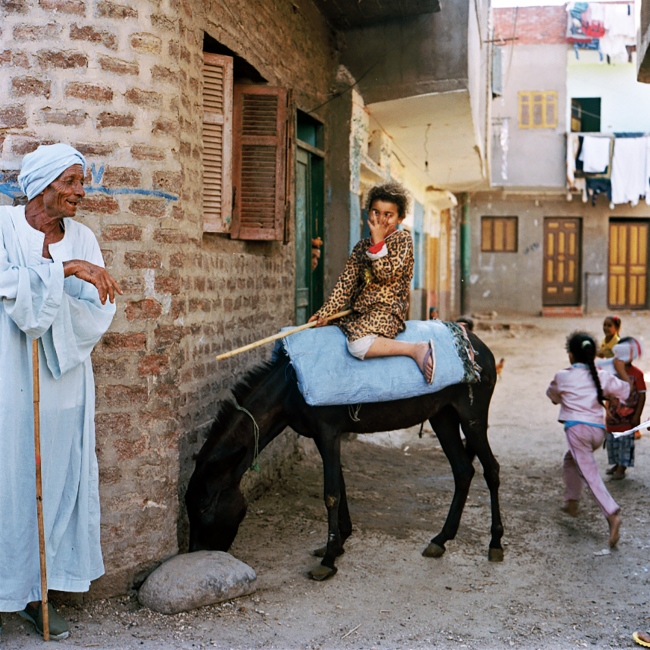 11 of 23 © 2021 Rena Effendi
Most residents are farmers who rely on diesel-powered pumps for irrigation and mules to get around. During Akhenatenâ€™s time people had to haul drinking water up from the river. 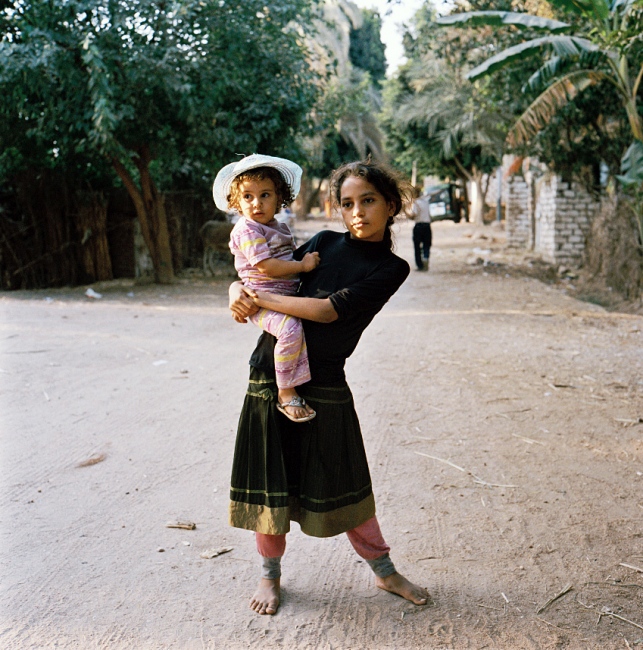 12 of 23 © 2021 Rena Effendi
Street scene in Tel-Amarna, near the site of Akhenathen's ancient city just 36 miles south of the modern-day Egyptian city of Al-Minya. 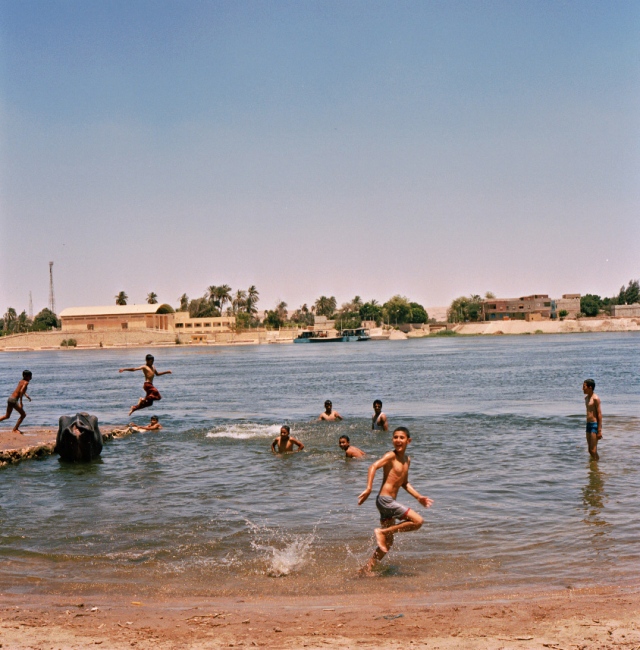 13 of 23 © 2021 Rena Effendi
Ferry crossing point on the Nile to Tel-Amarna and the site of Akhenatenâ€™s city. The ancient city itself lay alongside the river, which seems to have followed a course very similar to its present one. 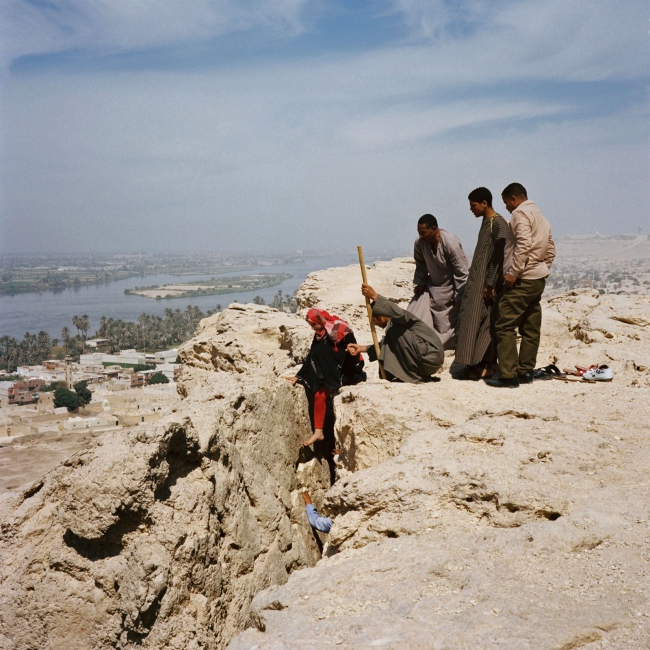 14 of 23 © 2021 Rena Effendi
High above the Nile a barefoot couple ritually descends a cliff face in hopes of curing infertility. In Egypt local people sometimes ask archaeologists to allow a young woman to circle an excavation, believing that the power of the antiquities will help her conceive. Such beliefs have nothing to do with Islam, and they reflect patterns and instincts that would have been familiar in ancient times. As Egyptologist Kemp has noted: â€œInventing traditions was something that the Egyptians were very good at.â€ 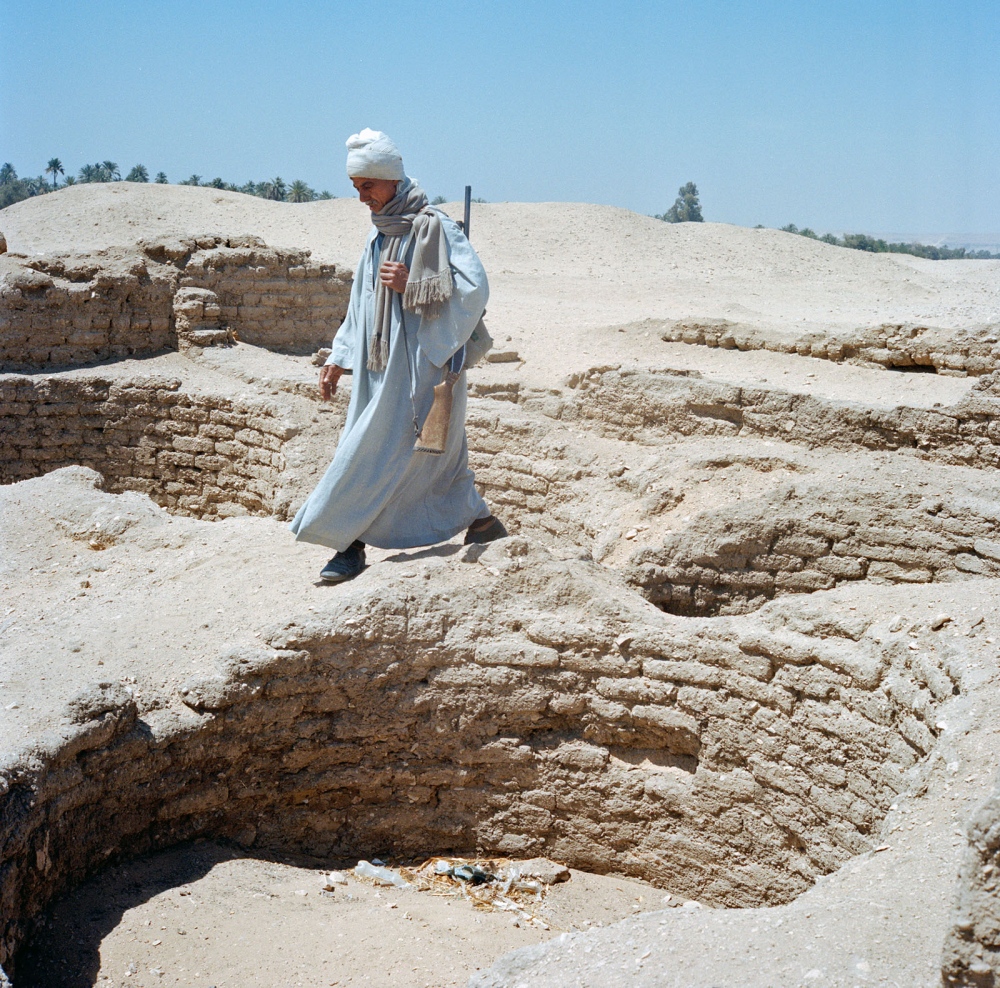 15 of 23 © 2021 Rena Effendi
An armed guard patrols near ancient grain silos at Amarna, where the intact ruins present a rare opportunity to study an ancient city at a moment in time. Amarnaâ€™s royal palaces, temples, and main roadways were carefully laid out, but the majority of construction was haphazard. Bill Erickson, a professor of urban design at the University of Westminster in London, says that housing patterns in Amarna were strikingly similar to what he has observed in modern slums and unplanned neighborhoods. â€œThese places may be 3,000 years old, but there are strong lessons about our cities today.â€ 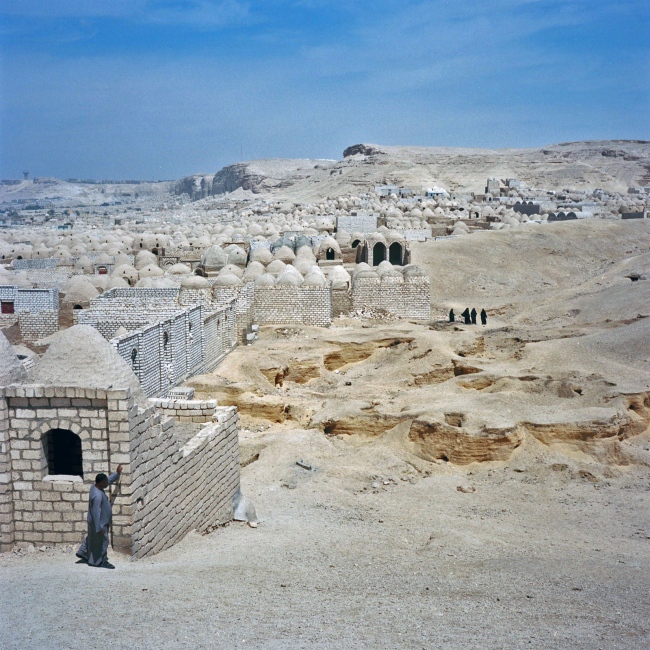 16 of 23 © 2021 Rena Effendi
Near the city of Minya, modern Egyptians still honor their dead by building permanent structuresâ€”such as a cemetery of domed roofs and limestone walls. At the ancient site of Amarna, the elite prepared elaborate tombs that were carved high into the cliffs east of the city. 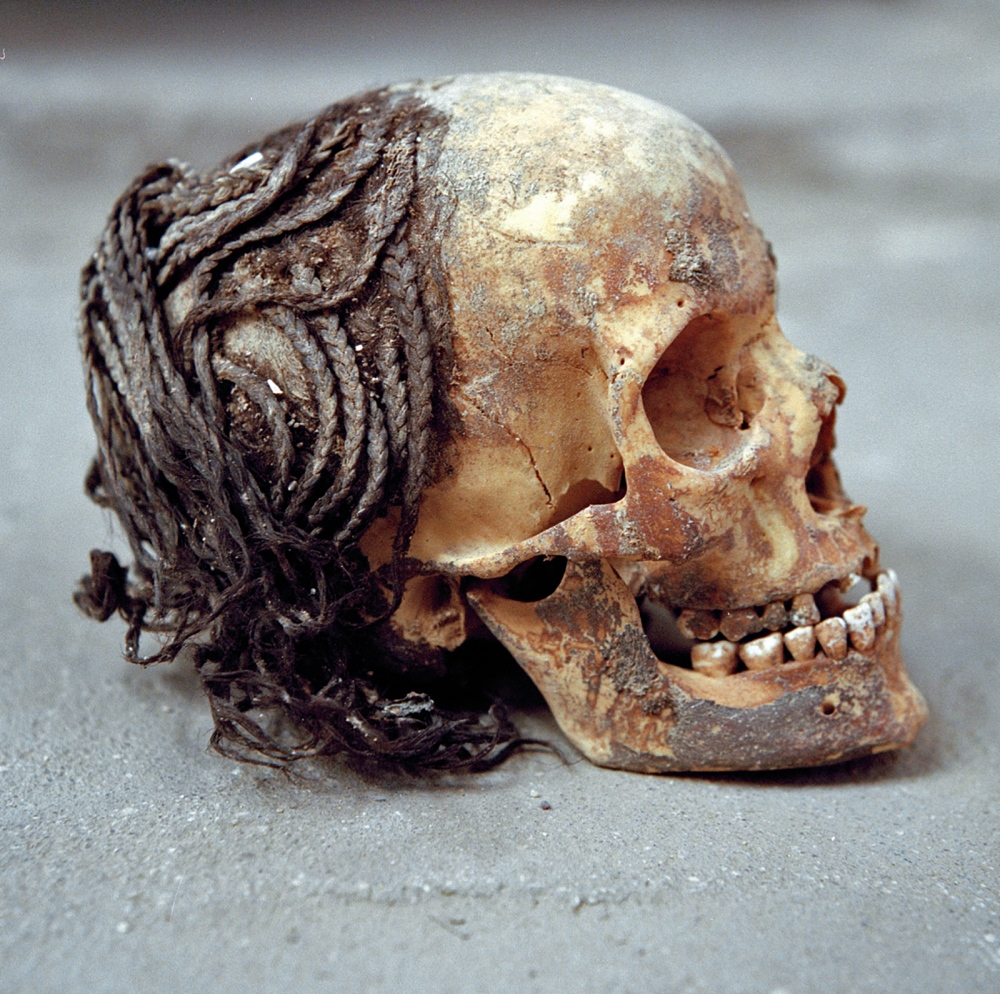 17 of 23 © 2021 Rena Effendi
Commoners were buried on the desert floor, where few markers or grave goods have been found. Elaborate braids on a skull reflect the care that ancient Amarna residents took with their appearance, despite difficult living conditions. 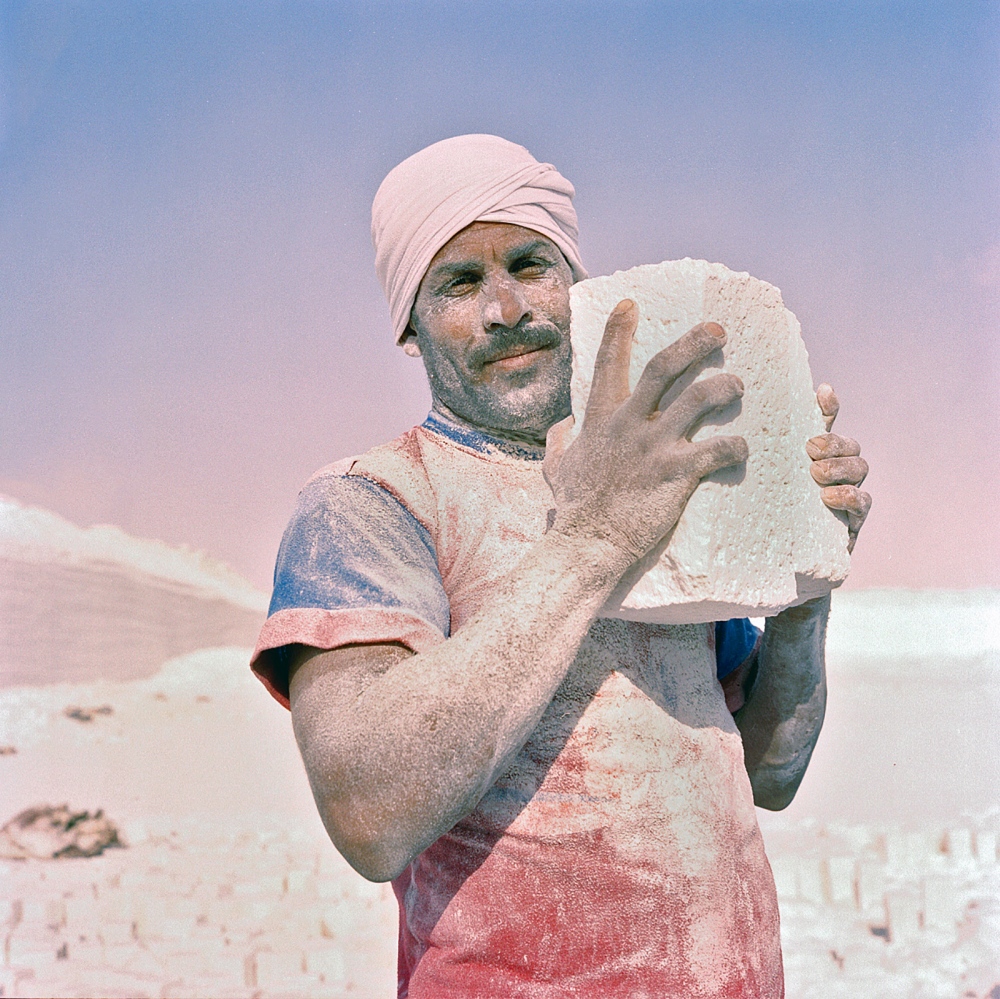 18 of 23 © 2021 Rena Effendi
For over 15 years this Coptic man has labored for limestone quarries piling bricks by hand. Akhenaten also took advantage of the limestone resources in this area, quarrying for materials used in the construction of his temples. 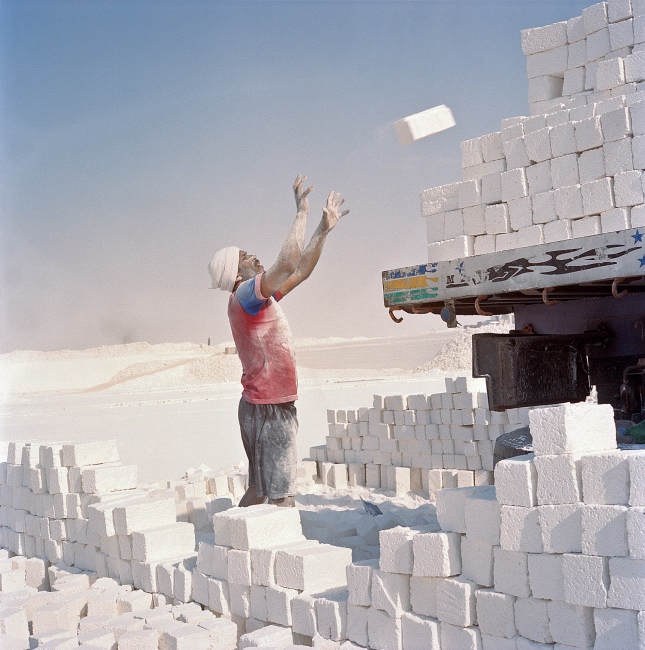 19 of 23 © 2021 Rena Effendi
Working conditions for people at the limestone quarries have changed little in terms of hardship. Much like in the days of Akhenaten it is a backbreaking labor of long shifts where seasonal workers get paid very little. 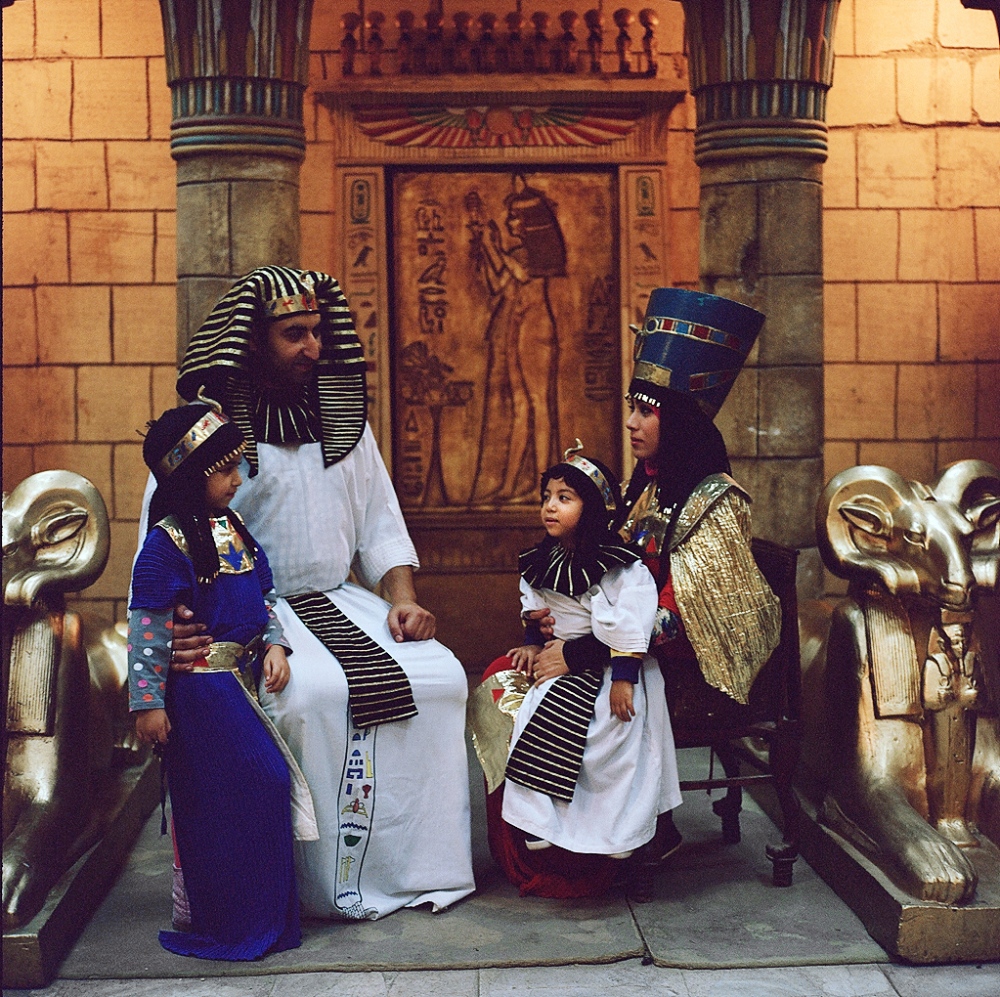 20 of 23 © 2021 Rena Effendi
No images of Akhenaten, Nefertiti, or Aten have been found in the commonersâ€™ cemeteries, suggesting that the new religion had yet to be embraced by the masses. Today, though, Egyptians at a Cairo theme park pose in ways that recall the natural, family-oriented style of Amarna art transformed by Akhenathen. 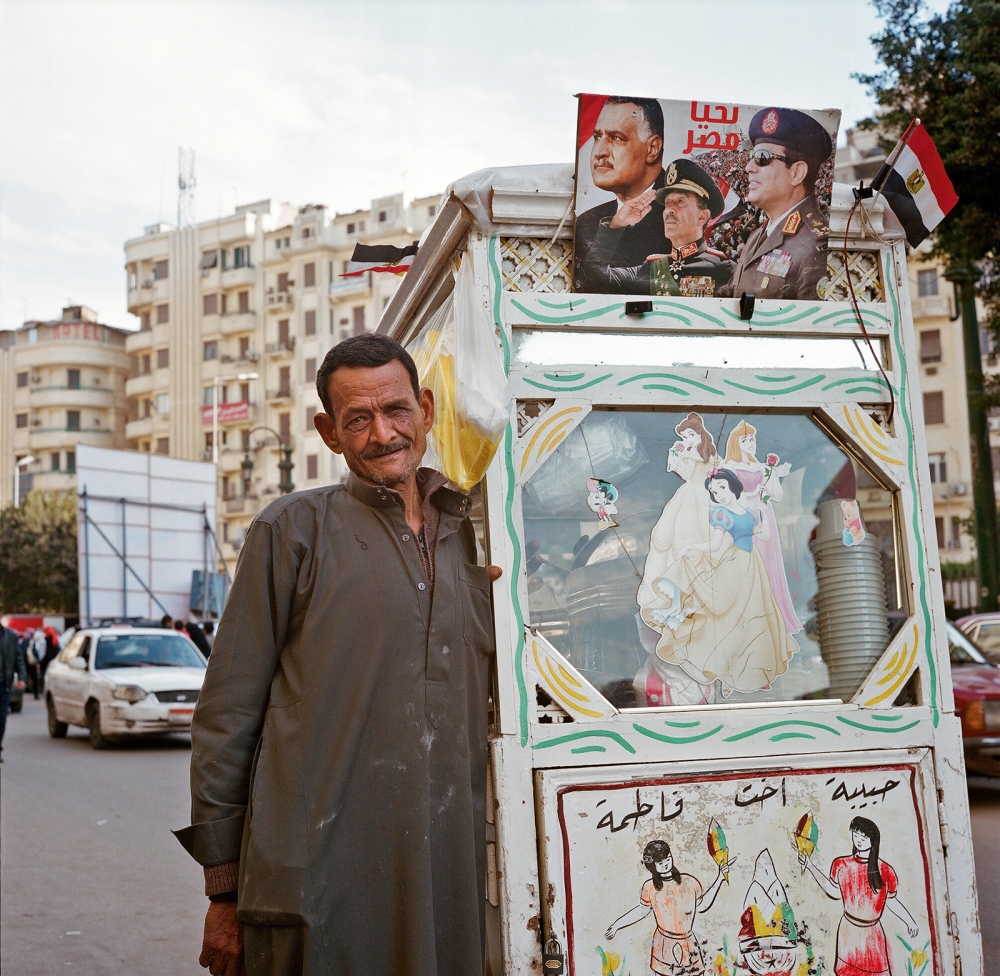 21 of 23 © 2021 Rena Effendi
The ways in which Akhenaten and other great pharaohs of his dynasty expressed their power are often similar to what we see in the personality cult of todayâ€™s Egypt. Much like in Akhenatenâ€™s era, his high-class subjects built shrines to the pharaoh, on the eve of the elections street vendors in Cairo put up posters of Sisi all over the city. 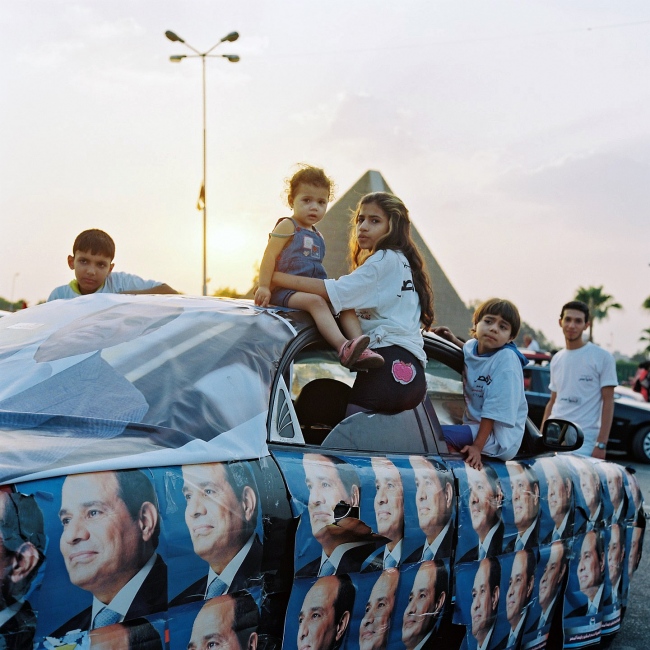 22 of 23 © 2021 Rena Effendi
In Barry Kempâ€™s book â€œAncient Egypt: Anatomy of a Civilization,â€ he wrote: â€œAkhenatenâ€™s kingship provides an unintended caricature of all modern leaders who engage in the trappings of charismatic display.â€ Here on the eve of Sisiâ€™s election day his supporters at pro-Sisi rally arrive in a car pasted with his photographs. 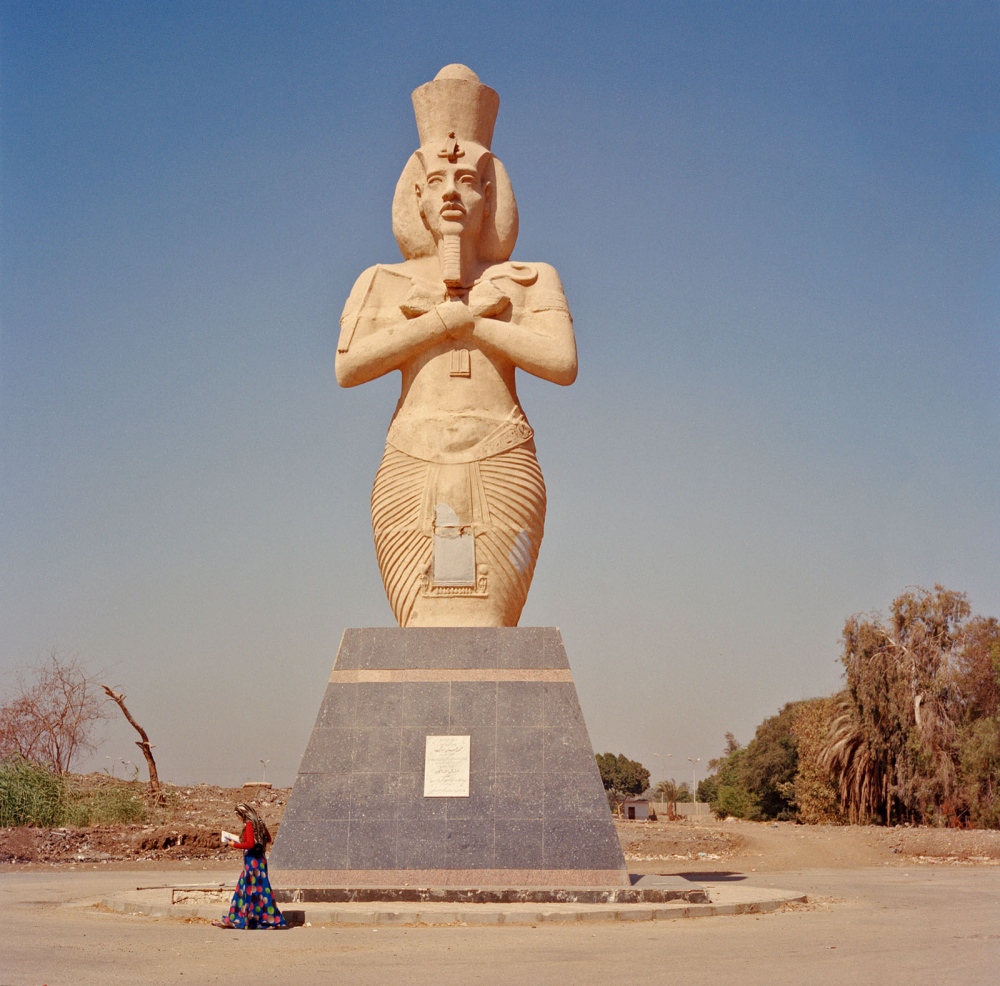 23 of 23 © 2021 Rena Effendi
The ancient king continues to be the subject of monumental art, including this sculpture at Minya University.
Public Story
Egypt's First Revolutionary
Copyright rena effendi 2021
Date of Work 04/15/14 - 01/05/16
Updated 04/17/18
Archived as Photography

Akhenaten, the pharaoh that ruled Egypt in 1300 BC and in his reign enforced the worshiping of one god - Aten "“ the sun disc is considered the first revolutionary in human history, but because of his radical views on religion his successors destroyed most physical evidence of his legacy, which today is more imaginative than monumental.

In order to establish new religious practices and fully abandon the old, Akhenaten built a new capital in the desert, about 36 miles south of Minya on the southern banks of the Nile. Akhetaten city was hastily constructed in mud-brick within an approximately 5-year period and covered an area of about 8 miles on the east bank of the Nile River. Within a few years, the previously unoccupied desert became home to Akhenaten"™s royal court and an estimated thirty thousand people followed him into the desert. The modern-day rural town of Tel-Amarna lies in immediate vicinity to Akhenaten"™s ancient city with the population mostly engaged in agriculture. Akhenaten was the father of Tutankhamun and the husband of Nefertiti, he had the power and vision to move thousands of people to an inhospitable place of no natural value. However, his city was abandoned shortly after his death, because of its desert location, where drinking water had to be brought in from the river.

Despite of him being eviscerated from the Egyptian landscape over 3000 years ago, this project examines parallels between Akhenaten "“ the revolutionary, founder of monotheism and the modern day Egypt, especially in light of the country"™s most recent events and political changes. The ways in which Akhenaten and other great pharaohs of his dynasty expressed their power are often similar to what we see in the personality cult of today"™s Egypt. Much like in Akhenaten"™s era, his high-class subjects built shrines to the pharaoh in their homes and gardens, on the eve of the elections street vendors in Cairo put up large-scale posters of Sisi all over the city. The pharaohs were often depicted with their powerful forefathers. In a similar way, Sisi's profile was photo-montaged next to Egypt's previous rulers Nasser and Sadaat.

By Rena Effendi — When a conflict broke out between Georgia and Russia in August 2008 over the Russian backed self-proclaimed..
Apr 12, 2018

By Rena Effendi — Liquid Land is co-authored with my father Rustam Effendi, a dissident scientist and entomologist who..
Apr 12, 2018

By Rena Effendi — I first came to Khinaliq to document life in Azerbaijan"™s highest inhabited village in 2003. Archeological..
Apr 13, 2018

By Rena Effendi — This story portrays Mahatma Gandhi and his enduring legacy in modern-day India trailing across the..
Apr 11, 2018

By Rena Effendi — For centuries, the small villages in Transylvania have preserved their hay meadows, raised cattle and..
Apr 11, 2018

By Rena Effendi — Ravaged by a never-ending war between various militias, rebels groups, and criminal combatants, the..
Apr 12, 2018

By Rena Effendi — This project documents a wide spectrum of wedding culture and traditions in Bangladesh. From luxurious..
Apr 13, 2018

By Rena Effendi — Text extract from the National Geographic Traveler, by: Bruce Shoenfeld Baku has always been at the..
Apr 13, 2018