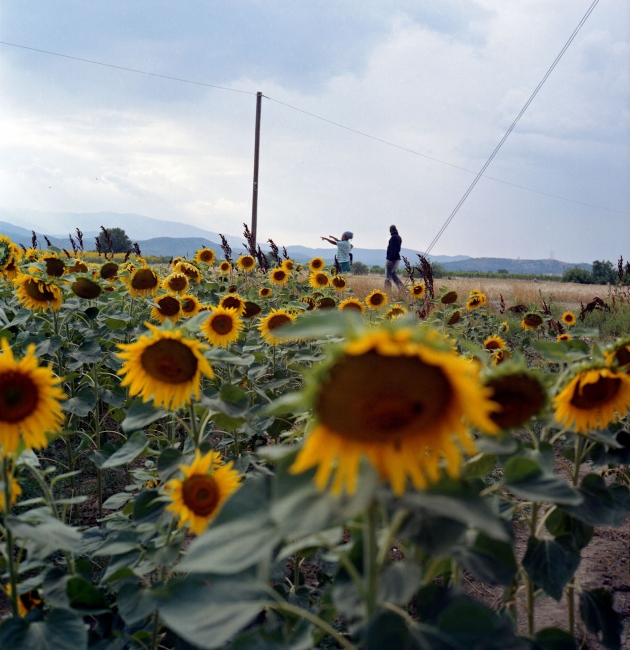 1 of 22 © 2021 Rena Effendi
Migrant family from South Sudan walking in the sunflower field in Idomeni, a crossing point between Greece and Macedonia where roughly around 400 migrants per day waited at the border for a chance to cross. 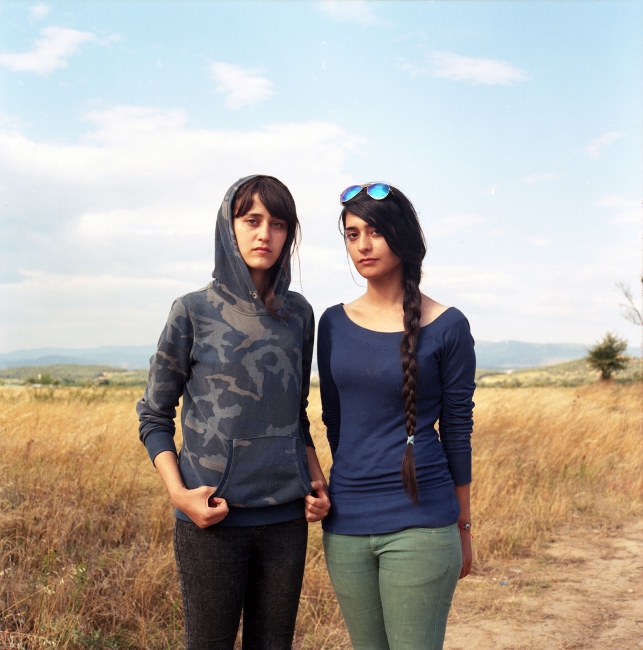 2 of 22 © 2021 Rena Effendi
Hevin Osman and her friend, refugees from Aleppo, Syria camped for four days in the fields of Idomeni by the Greek-Macedonian border waiting for a chance to cross. 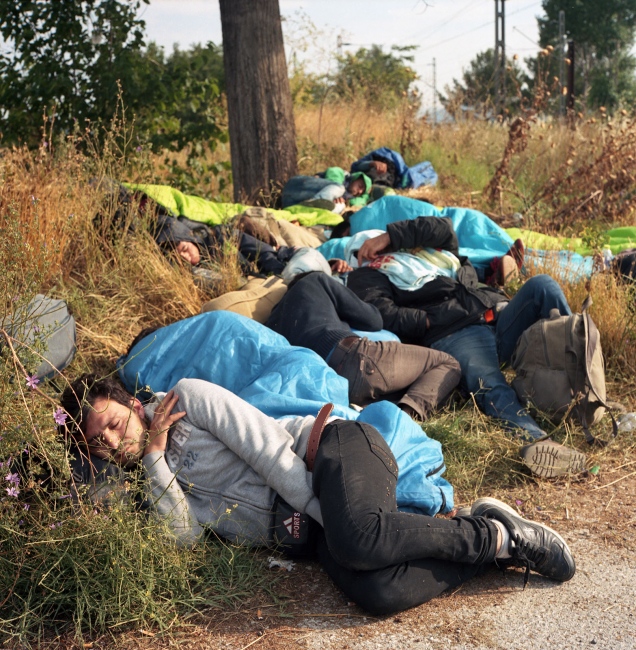 3 of 22 © 2021 Rena Effendi
Syrian refugees huddled in the fields of Idomeni, a small Greek town on the border with Macedonia. The border was closed and patrolled by the Macedonian police. Migrants waited till nightfall to cross through the forests and fields into Macedonia. 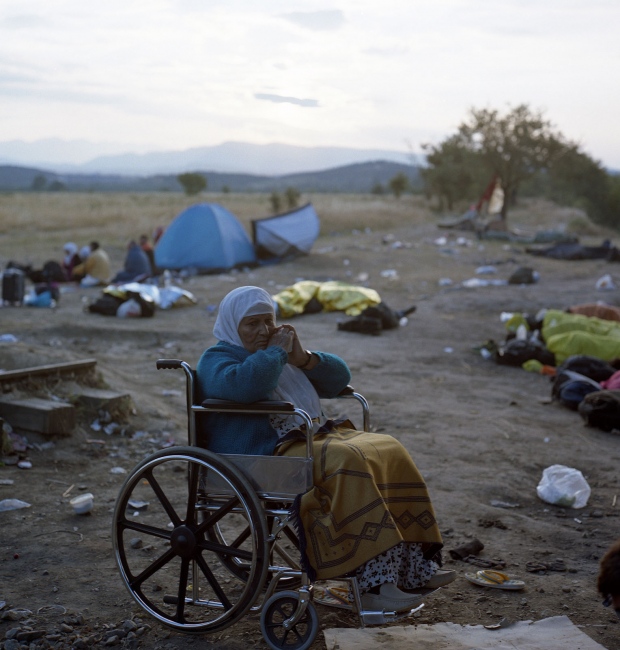 4 of 22 © 2021 Rena Effendi
Syrian refugee waiting in the fields in Idomeni for a chance to cross. According to International Migration Organization, in the first six months of 2015 around 59,000 refugees arrived in Greece, 21,000 of which were from Syria. 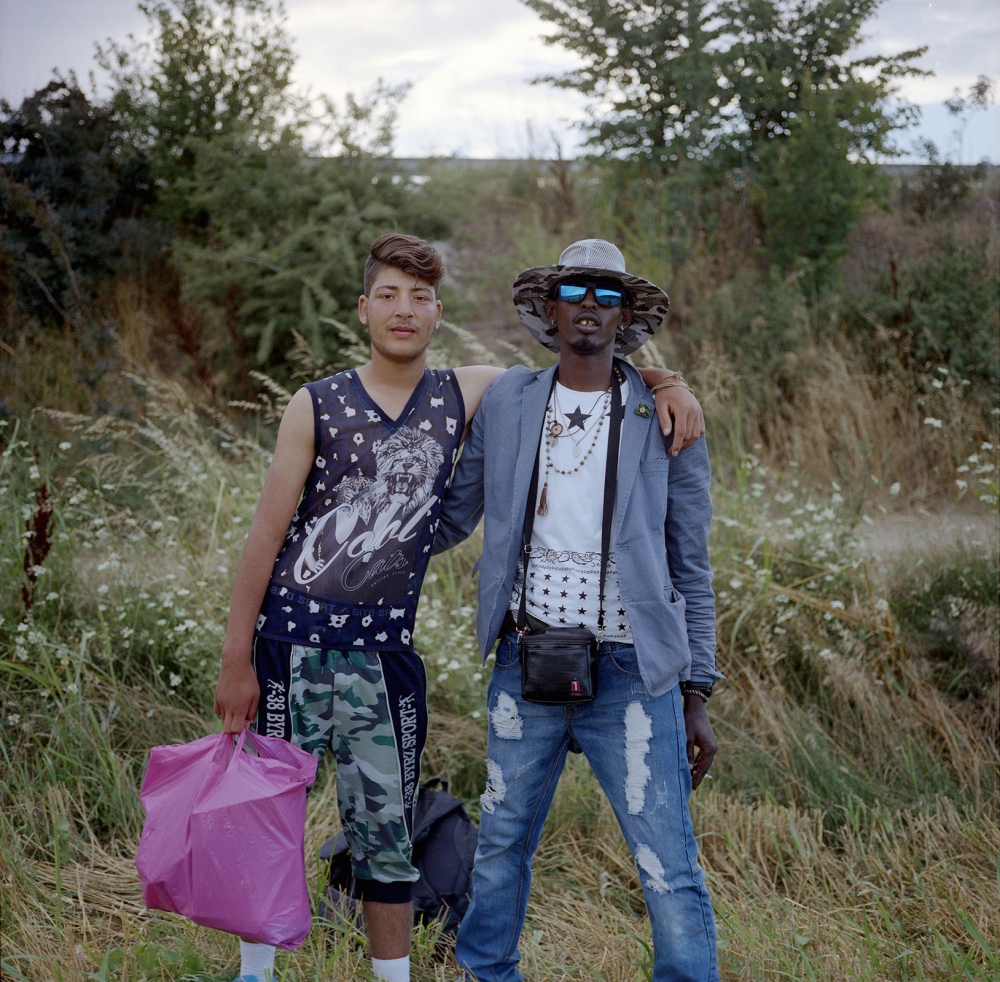 5 of 22 © 2021 Rena Effendi
Afghan and Somalian refugees met in a group of people trying to cross at nightfall by walking through the fields and forests from the Northern Greek town of Idomeni into Macedonia. 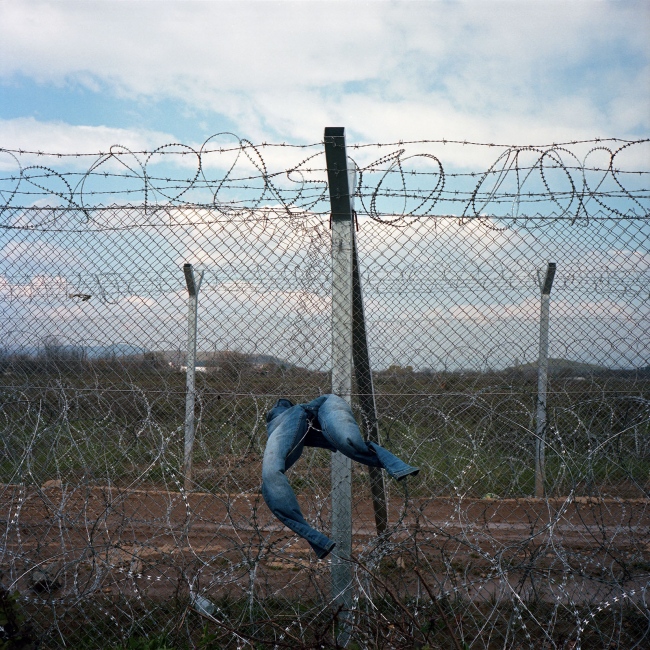 6 of 22 © 2021 Rena Effendi
"My jeans tried to cross further into Europe, but got caught in the wire fence." - a young Syrian refugee boy jokes while he and his family had been stuck in a makeshift camp in Idomeni, Greece for two months in 2016 hoping for the border to open and let them through. 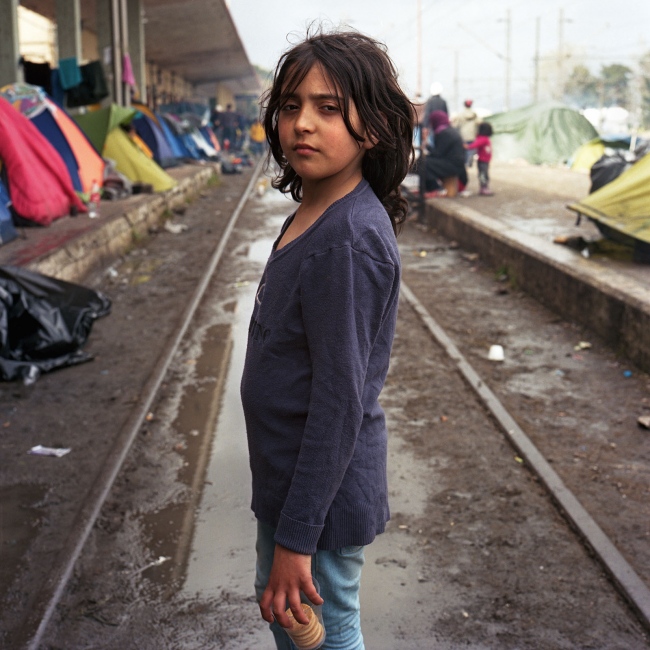 7 of 22 © 2021 Rena Effendi
Syrian refugee with a cup of bisquits coming back from the food hand-outs of Greek volunteers in Idomeni. More than ten thousand refugees camped out by the closed and patrolled border with Republic of Macedonia in 2016, enduring desperate living conditions for months waiting for a chance to cross. 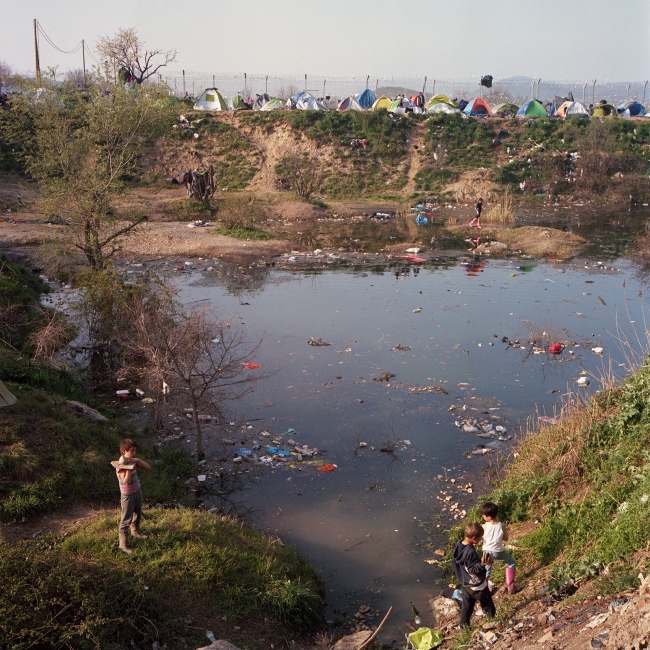 8 of 22 © 2021 Rena Effendi
Thousands of refugees got stuck in unlivable conditions of a make-shift camp in a Greek town of Idomeni by the border with FYROM with inadequate food supply and disease spread due to poor sanitation. 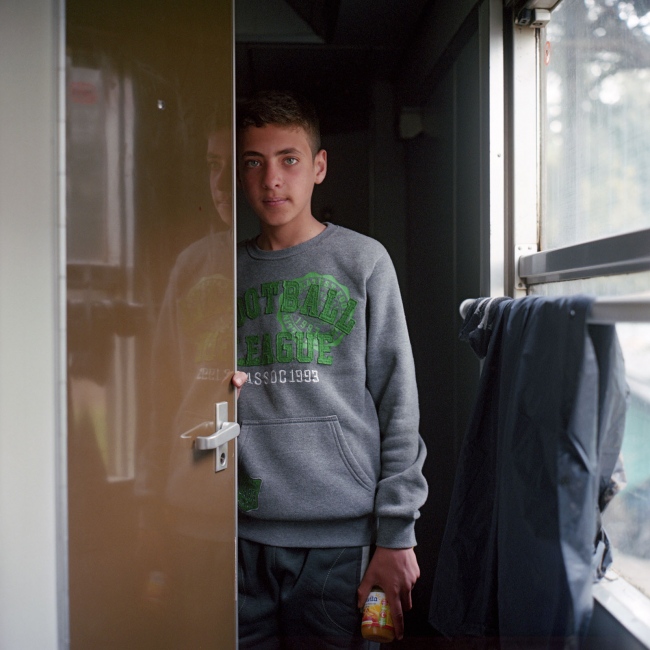 9 of 22 © 2021 Rena Effendi
Basel, a fifteen year-old schoolboy from Idlib, Syria. He and his family camped in Idomeni for a month in March 2016. Initially they lived in a tent, but it became unbearable with rain, mud and wind. They were able to relocate inside the train compartments donated by the Greek government. 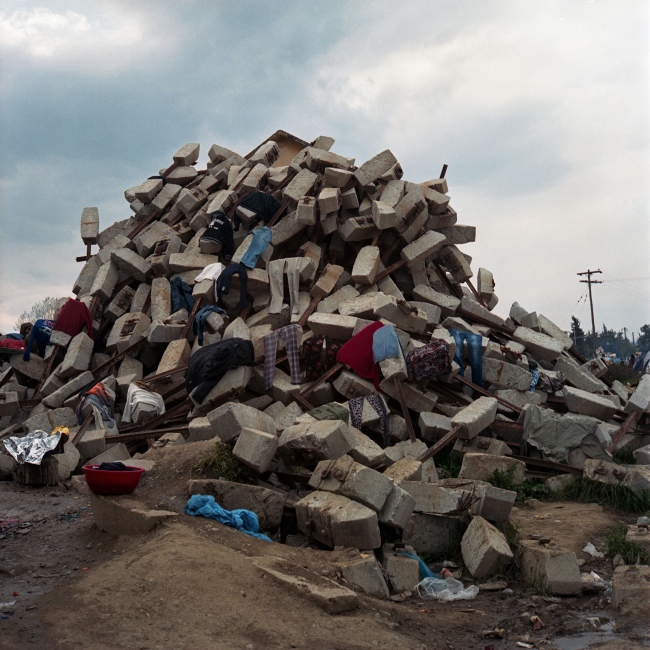 10 of 22 © 2021 Rena Effendi
Clothes strewn to dry after being handwashed by refugees in a Greek town of Idomeni where more than ten thousand people camped out in unsanitary conditions and harsh weather for several months waiting for a chance to cross the sealed border and continue their journey into Europe. 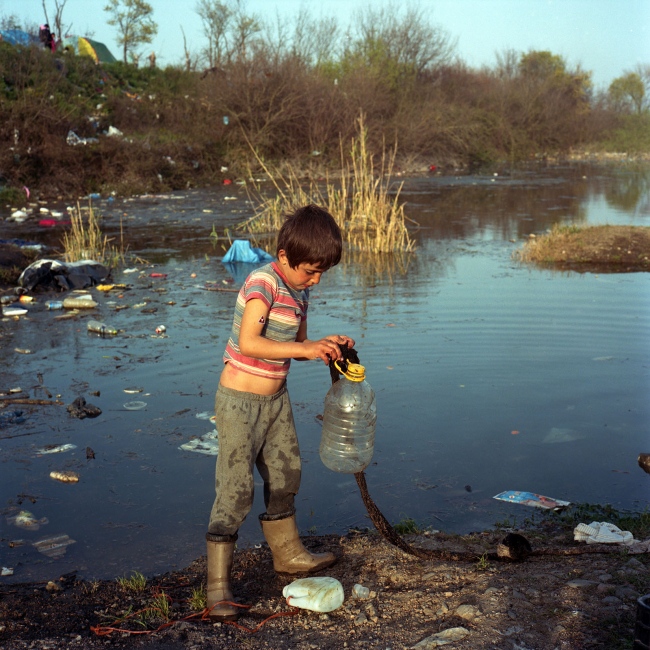 11 of 22 © 2021 Rena Effendi
Syrian refugee boy plays with a plastic bottle by the pond in Idomeni. 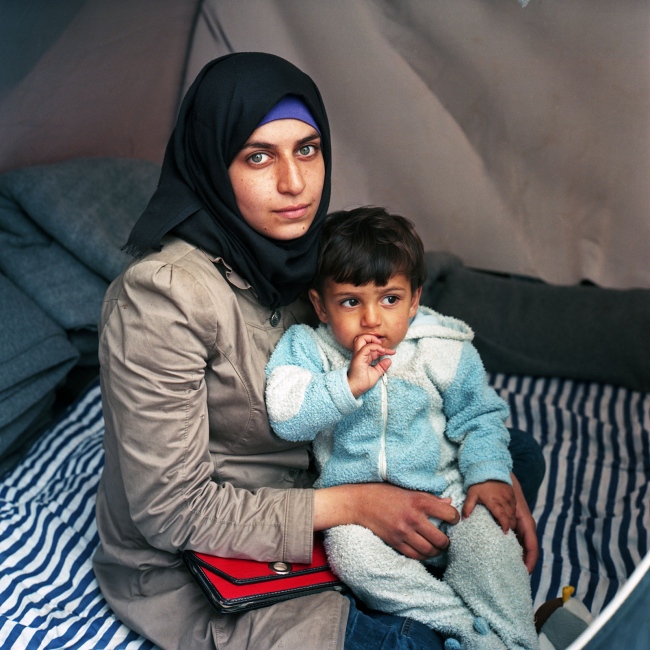 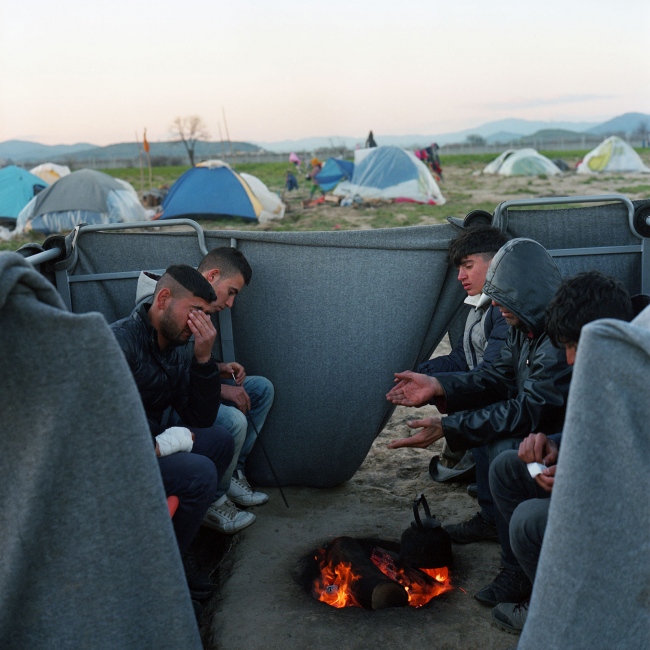 13 of 22 © 2021 Rena Effendi
Young Syrian men are heating up a pot of tea in a tent to warm themselves in the harsh cold winds in Idomeni. 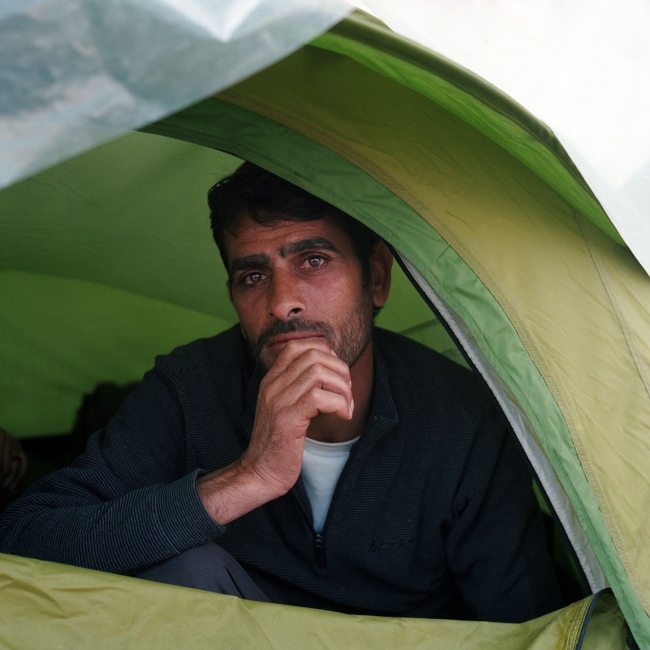 14 of 22 © 2021 Rena Effendi
Syrian refugee man inside his tent in Idomeni, Greece. Thousands waited by the sealed border with Macedonia for a chance to cross into Europe, but the makeshift camp was eventually shut down, Greek riot police moved in on the camp and cleared it of all remaining residents. People were ordered to move to the government-run camps throughout Greece, where many of them still remain waiting for their paperwork to get processed. 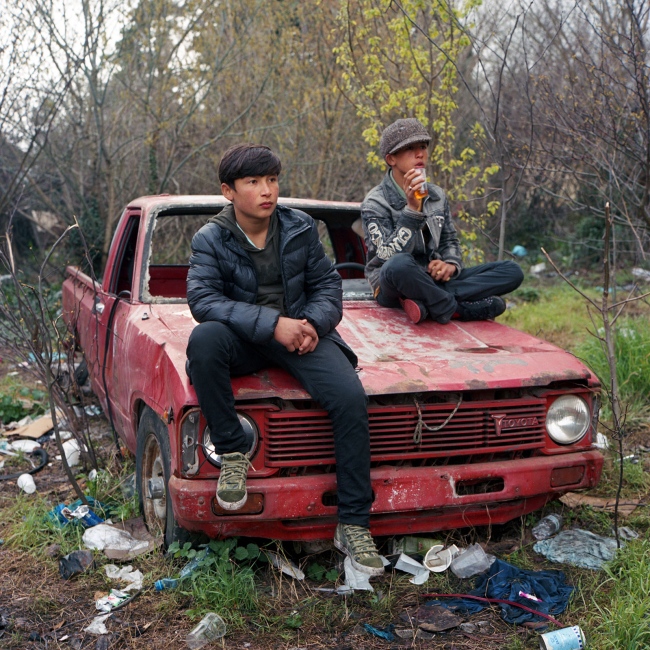 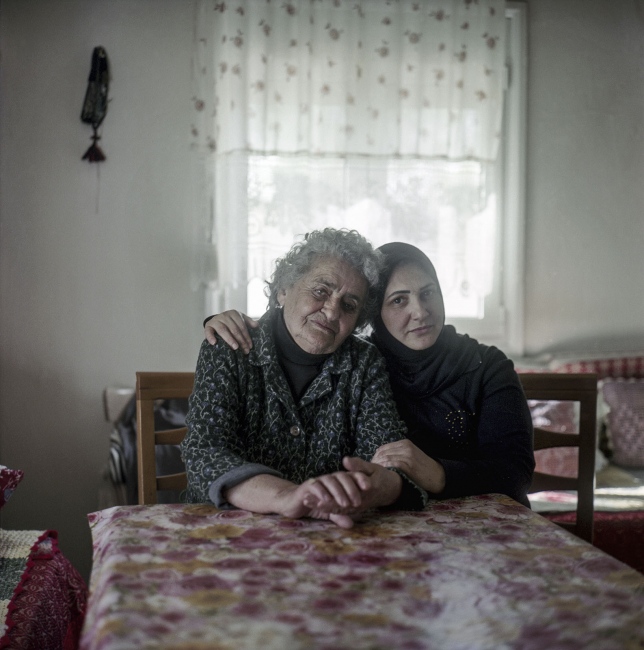 16 of 22 © 2021 Rena Effendi
Eighty-two year old local resident of Idomeni Panagiota Vasiliadou hosted eight Syrian refugees in her house. Panagiota provided food, while the women helped cook the meals and the men helped around the garden. Her water and electricity bills more than doubled, since she has welcomed the refugees to stay in her home. She said she could not afford to support eight adults with her pension of EURO 400 a month, but she did not know how to tell them to leave. 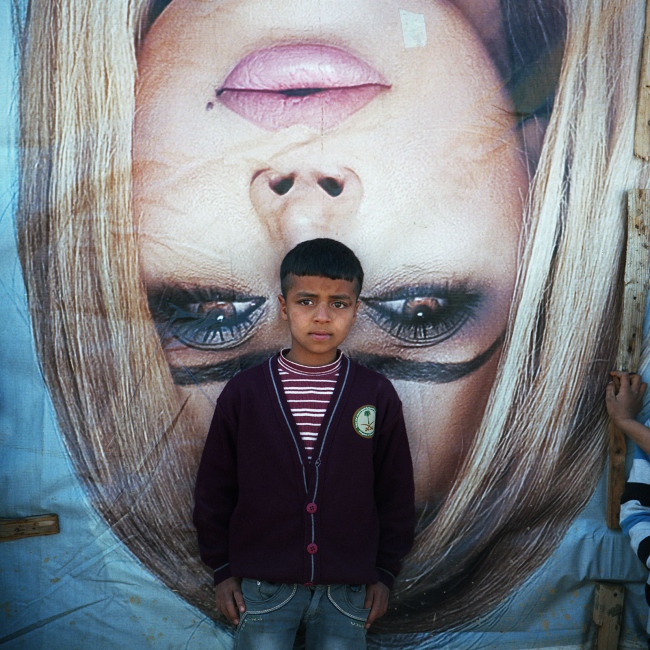 17 of 22 © 2021 Rena Effendi
Syrian refugee boy outside a tent made out of billboard canvasses with an image of Lebanese pop star Nawal El Zoghby in an informal settlement of Syrian refugees in the Beqaa Valley in 2014. 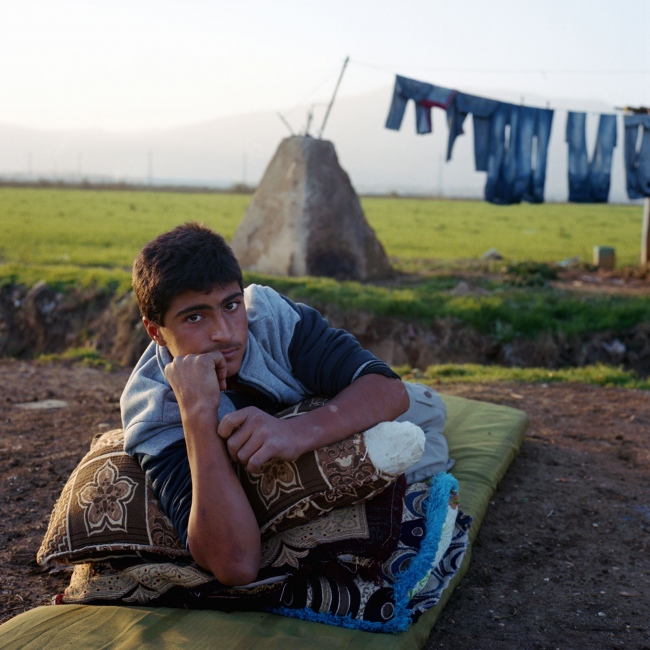 18 of 22 © 2021 Rena Effendi
Mohamed, a fifteen year old refugee from Homs outside the informal settlement on the premises of an abandoned onion factory in the Beqaa Valley of Lebanon. 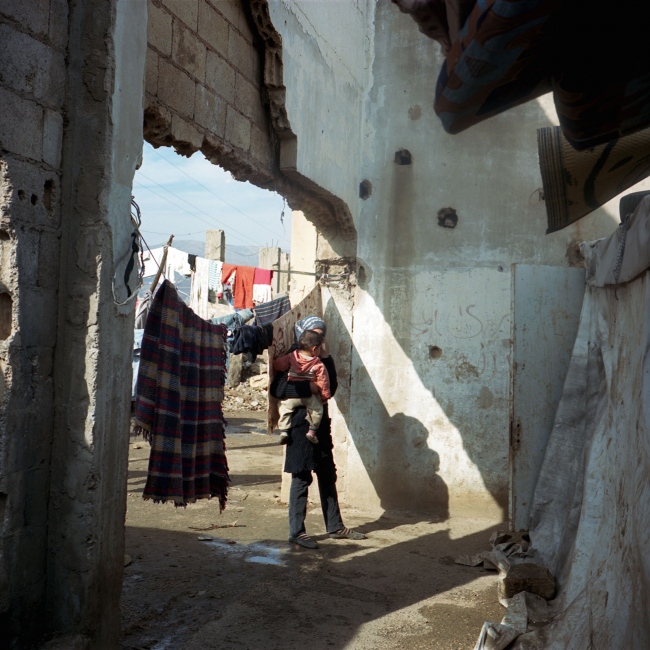 19 of 22 © 2021 Rena Effendi
Informal Syrian refugee settlment in an abandoned onion factory in the Beqaa valley of Lebanon. 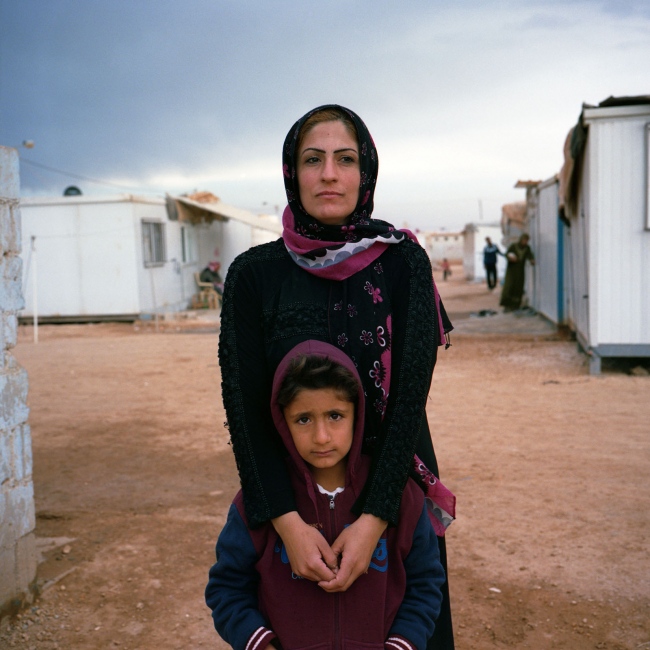 20 of 22 © 2021 Rena Effendi
Syrian schoolteacher Amal Hourani's adjustment to life in the Zaatari refugee camp in Jordan has not been easy, she said: "I refused to carry water from the distribution point, or to wait in line for food handouts. I refused to wash laundry with my bare hands. Back home I used a washing machine. I said to myself, I will not let this situation and our circumstances get the better of me, I will beat it. I will be stronger than that." 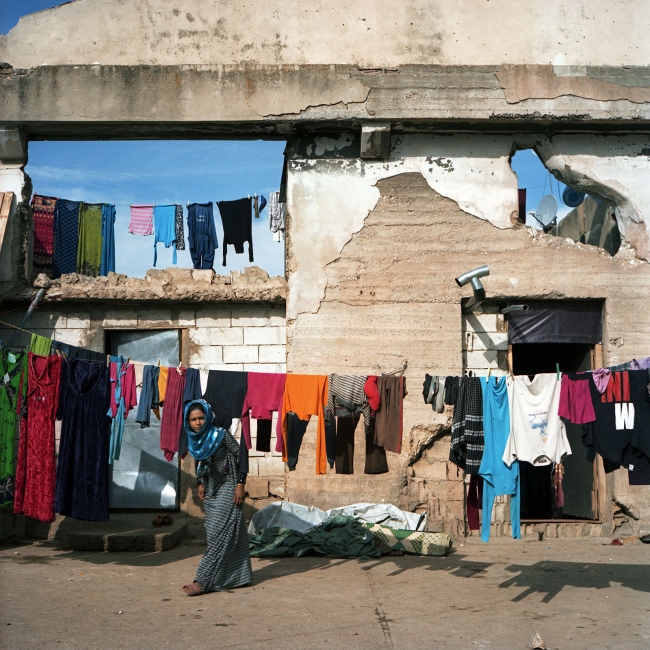 21 of 22 © 2021 Rena Effendi
Informal Syrian refugee settlment in an abandoned onion factory in the Beqaa valley of Lebanon. 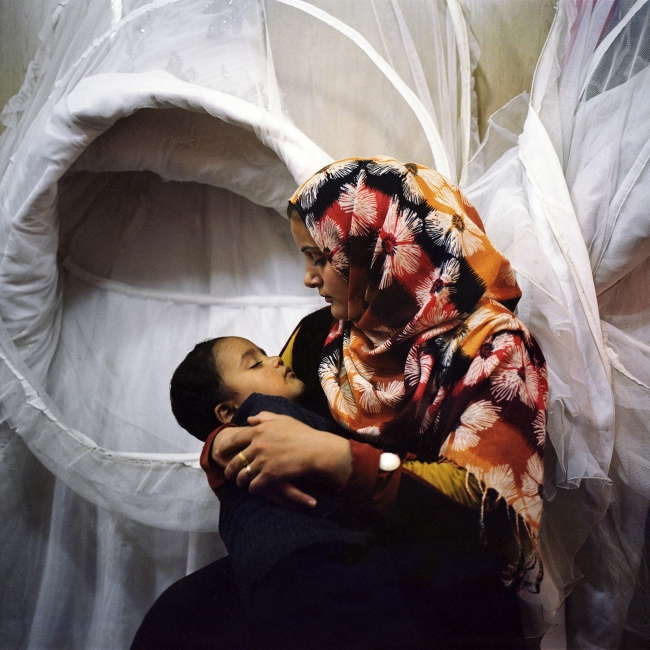 22 of 22 © 2021 Rena Effendi
Em Odai, Syrian refugee and owner of a beauty and wedding dress salon in the Zaatari camp in Jordan said: "There is nothing here! We try and recreate some things from our past, we try, but it can't be done. It's not the same. It's just what you remember when you think of Syria, everything about it is better, even the air. That's enough for me - just to breathe its air again."
Public Story
The Crossing Point
Credits: rena effendi
Date of Work: 12/10/14 - 04/18/16
Updated: 04/17/18
Archived as:  Action, Documentary, Editorial, Photography, Photojournalism, War

In a small Greek town of Idomeni in 2015, a long and slow trail of people shuffled across fields and irrigation ditches, attempting a crossing from northern Greece into Macedonia. At nightfall, they trodded through the forests where bandits and smugglers lurked. Mothers carried children, fathers were loaded with plastic bags of food supplies and young men equipped with tents navigated the unfamiliar terrain with smart-phones. Syrians, Iraqis, Afghans along with others were on their way to Europe, escaping the violence of war back home. Along with their meager food supplies and scarce belongings, the heaviest burden they carried was the story they had escaped from. A Kurdish man from Syria pointed to his phone with a YouTube video of ISIS beheadings in his town.

In the early hours of the morning, men and women huddled to keep warm sleeping in the pastoral hay meadows and drifting mist like scattered carcasses in a battlefield.  In the dusk hours, people fragmented into smaller groups to walk along the invisible border looking for an opening, a crossing point that was not guarded by the Macedonian police or controlled by the smugglers. As they spotted a clearing, dozens gathered in the bushes a few meters into the Macedonian territory waiting for darkness to fall.  Men were armed with twigs and kitchen knives to fend off potential attacks of random smugglers who would extort payments and disrupt their crossing.

A year later in 2016 authorities constructed a fence in Idomeni, firmly sealing the borders. More than twelve thousand people were stuck in a limbo, languishing in a wretched camp by the border. The tents stirred with anxious murmurs. Families moved and shuffled inside, progressively unsettled by their fading hopes to cross. What once was a chance for a better life - the Crossing Point - has become a metaphor for human resilience at the face of hardship. This project documents the interrupted flow of refugees, living in uncertainty in camps scattered across Greece, Lebanon and Jordan.

By Rena Effendi — When a conflict broke out between Georgia and Russia in August 2008 over the Russian backed self-proclaimed..
May 5, 2018

By Rena Effendi — Liquid Land is co-authored with my father Rustam Effendi, a dissident scientist and entomologist who..
May 4, 2018

By Rena Effendi — I first came to Khinaliq to document life in Azerbaijan’s highest inhabited village in 2003. Archeological..
May 4, 2018

By Rena Effendi — This story portrays Mahatma Gandhi and his enduring legacy in modern-day India trailing across the..
Apr 21, 2018

By Rena Effendi — For centuries, the small villages in Transylvania have preserved their hay meadows, raised cattle and..
Apr 21, 2018

By Rena Effendi — In 2015, just a year after winning the election, Egypt’s president Abdel Fatah Al-Sisi announced his plan..
Apr 20, 2018

By Rena Effendi — Ravaged by a never-ending war between various militias, rebels groups, and criminal combatants, the..
Apr 17, 2018

By Rena Effendi — This project documents a wide spectrum of wedding culture and traditions in Bangladesh. From luxurious..
Apr 17, 2018

By Rena Effendi — Text extract from the National Geographic Traveler, by: Bruce Shoenfeld Baku has always been at the..
Apr 17, 2018