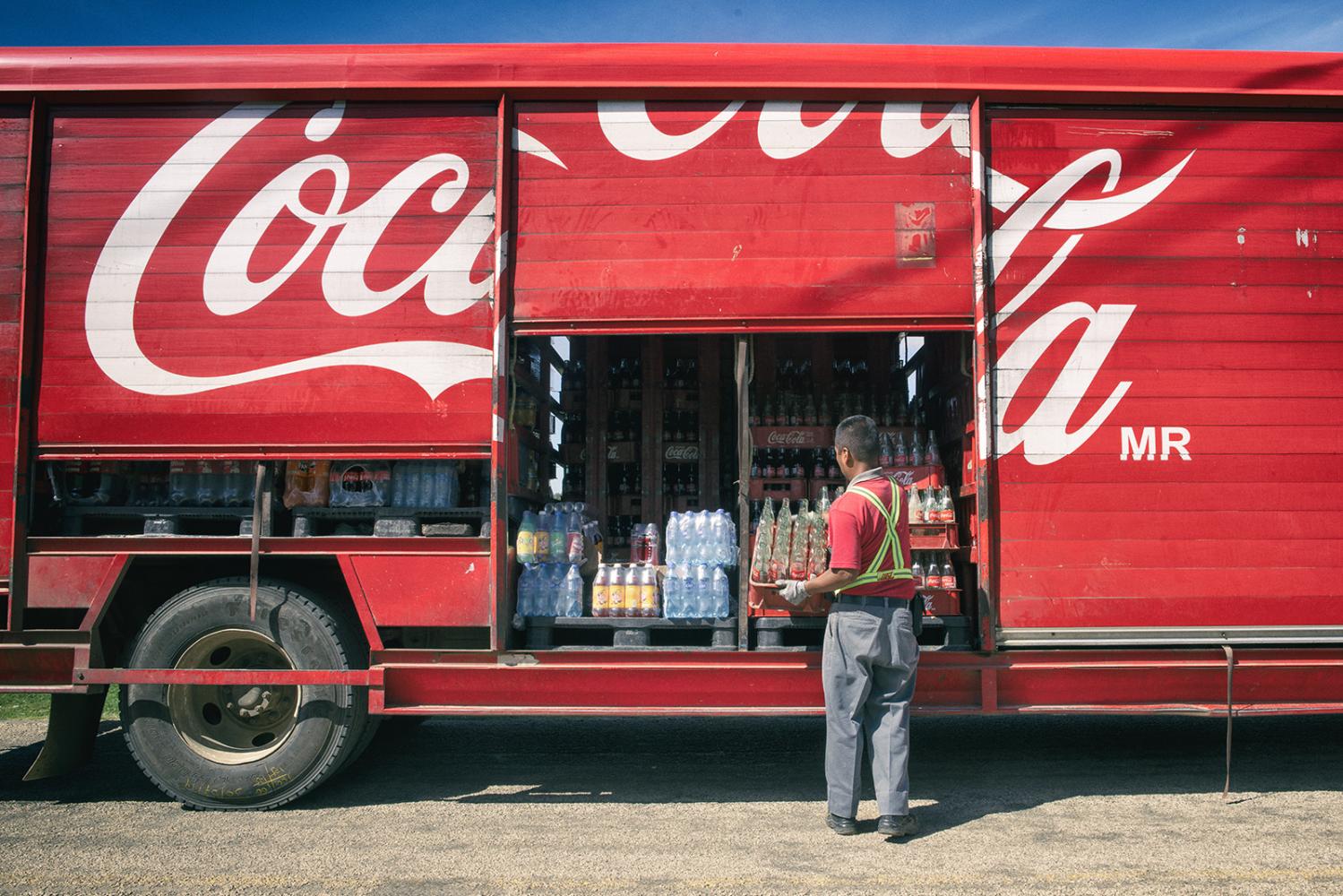 1 of 22 © 2021 Diana Bagnoli
Widespread delivery of CocaCola in the rural areas of Chiapas. 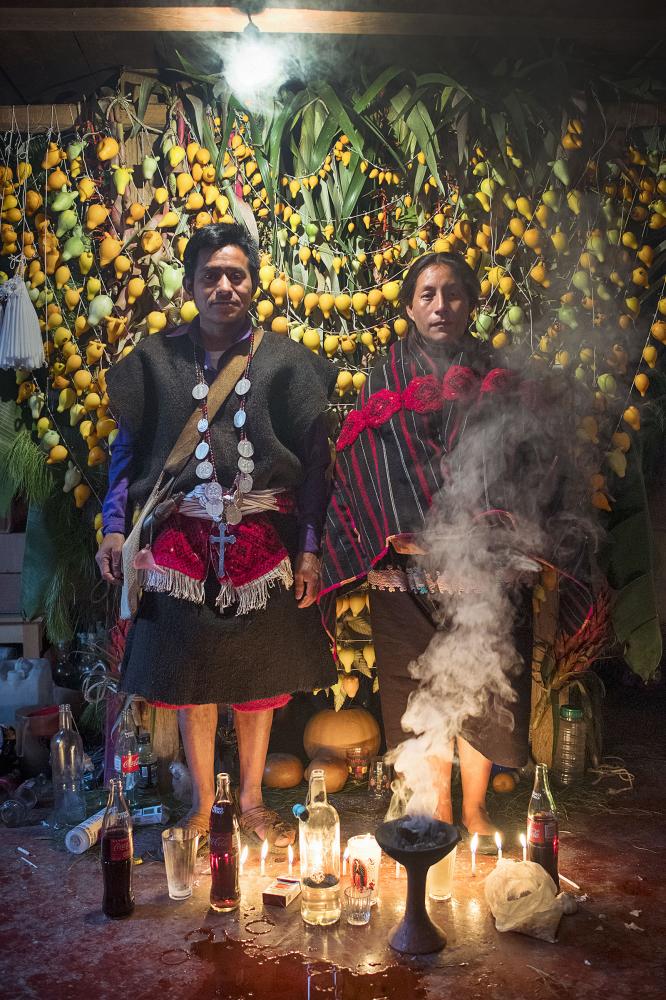 2 of 22 © 2021 Diana Bagnoli
A couple of indigenous people in front of their altar close to san Cristobal. 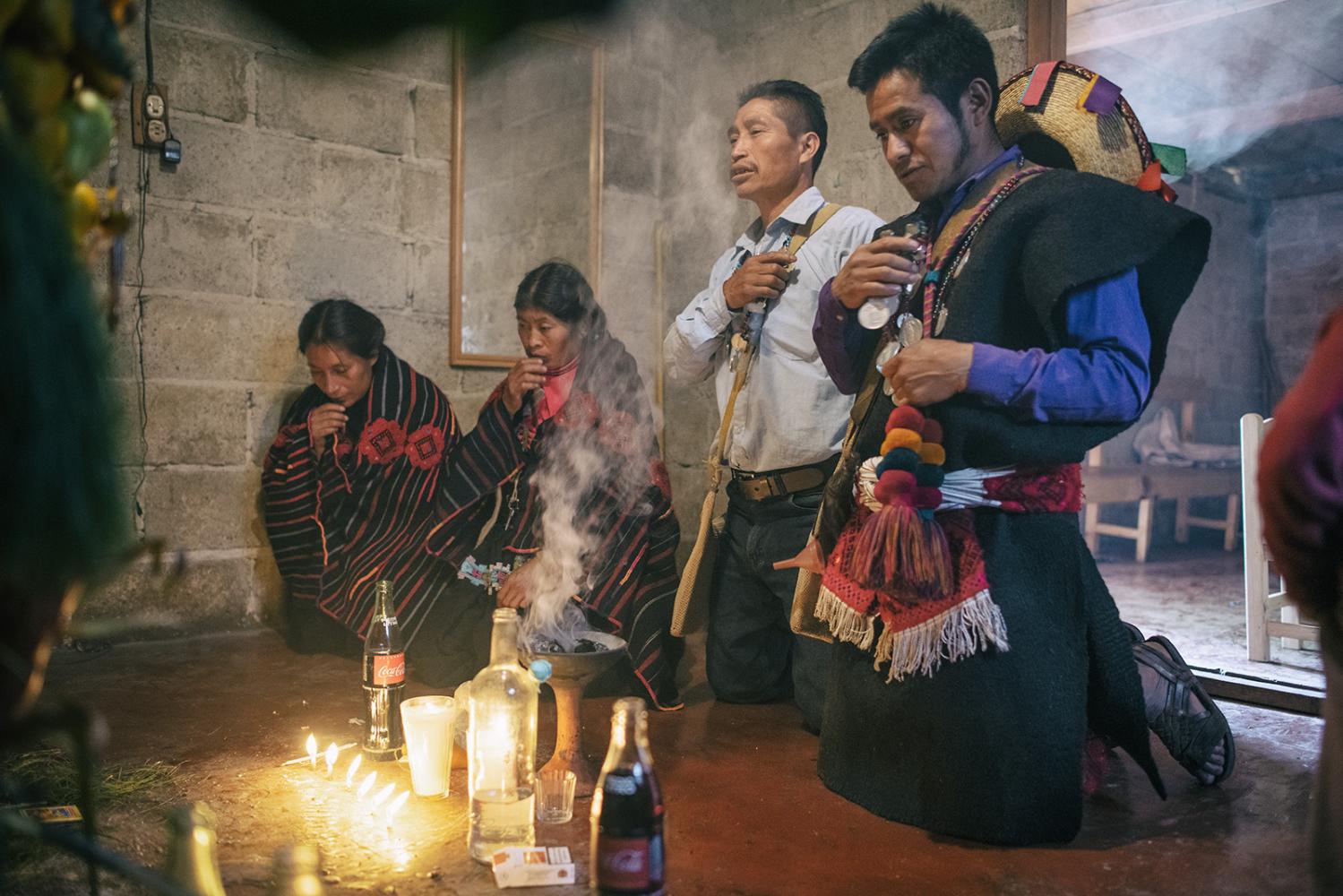 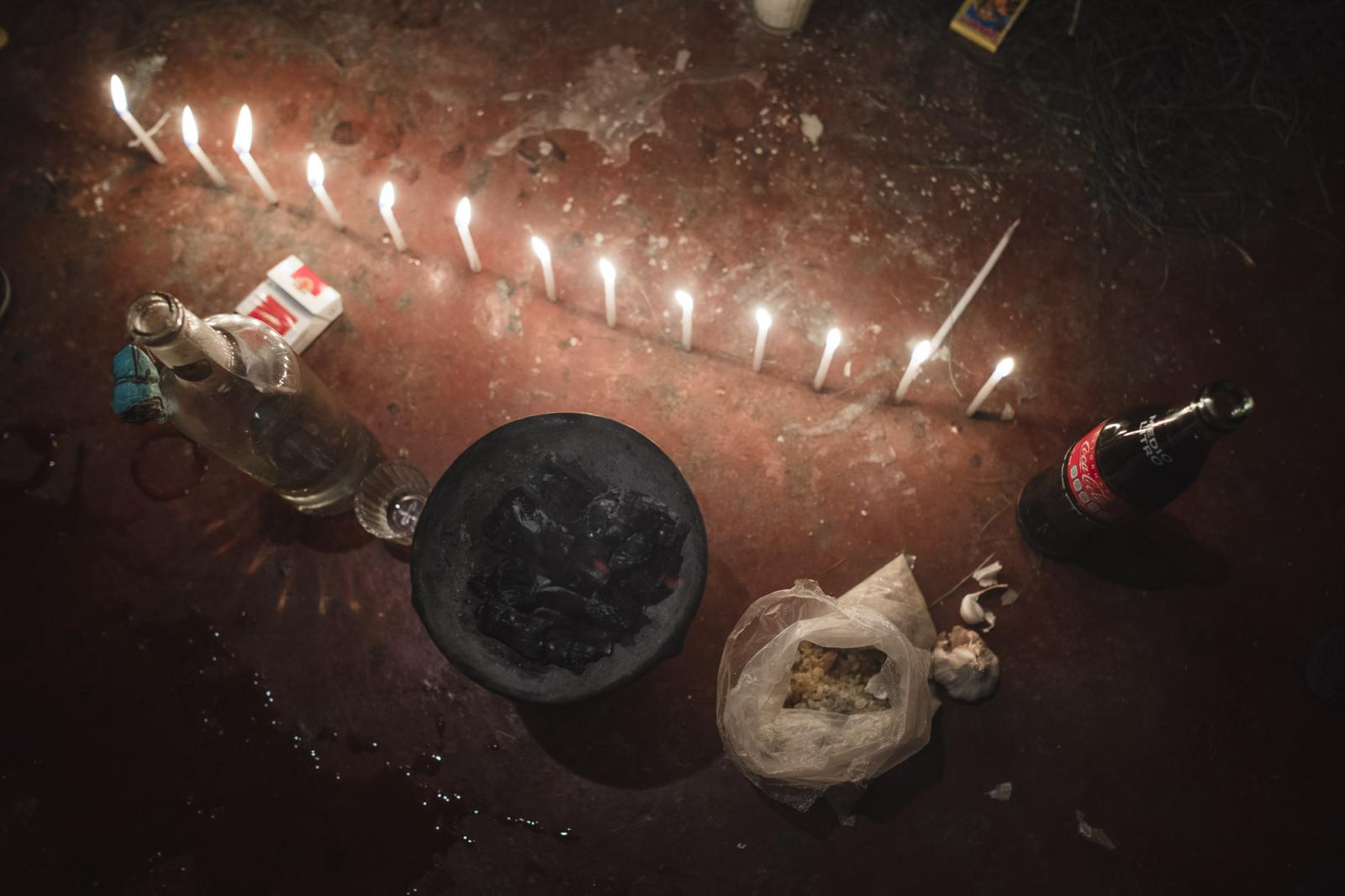 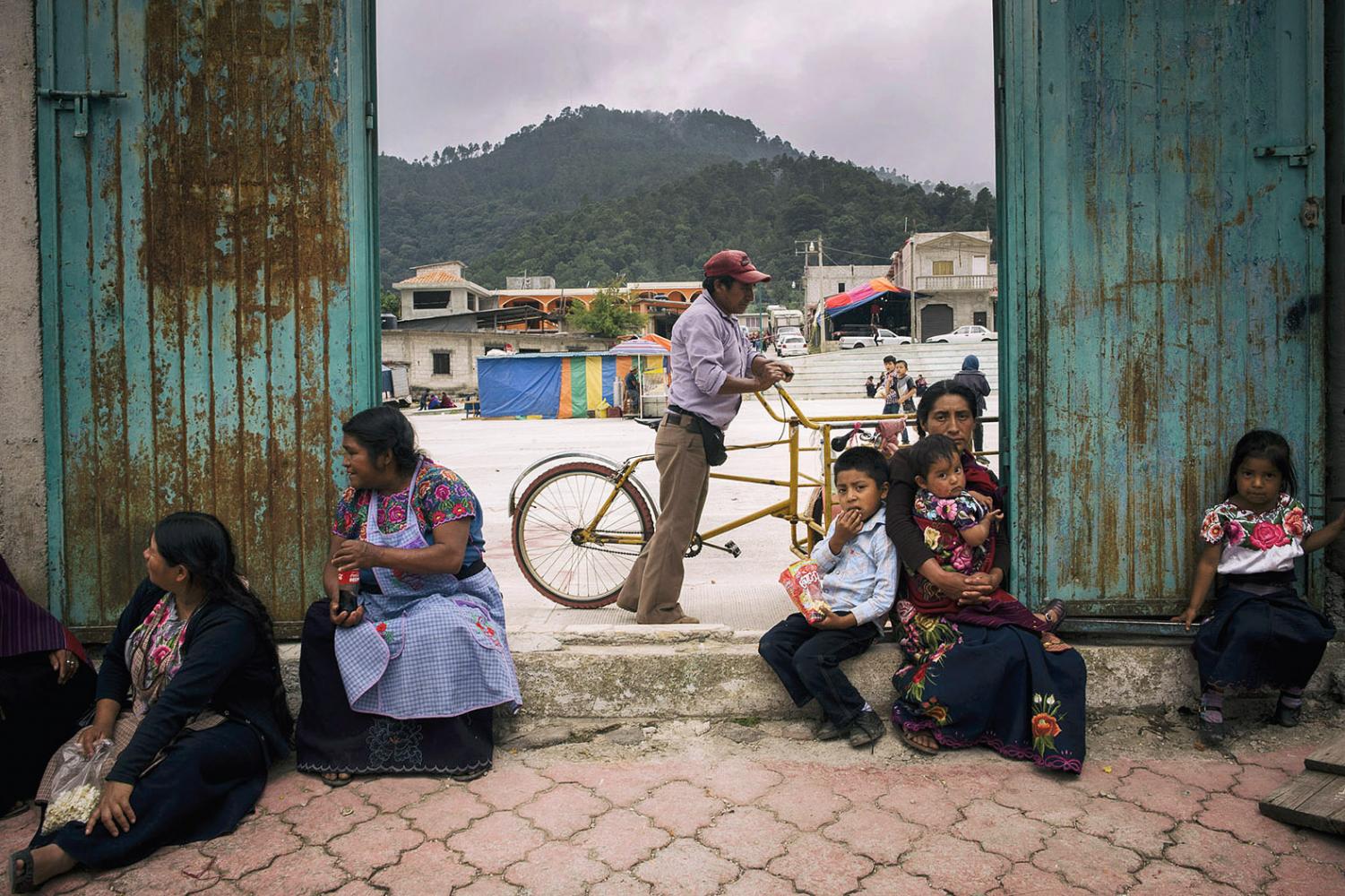 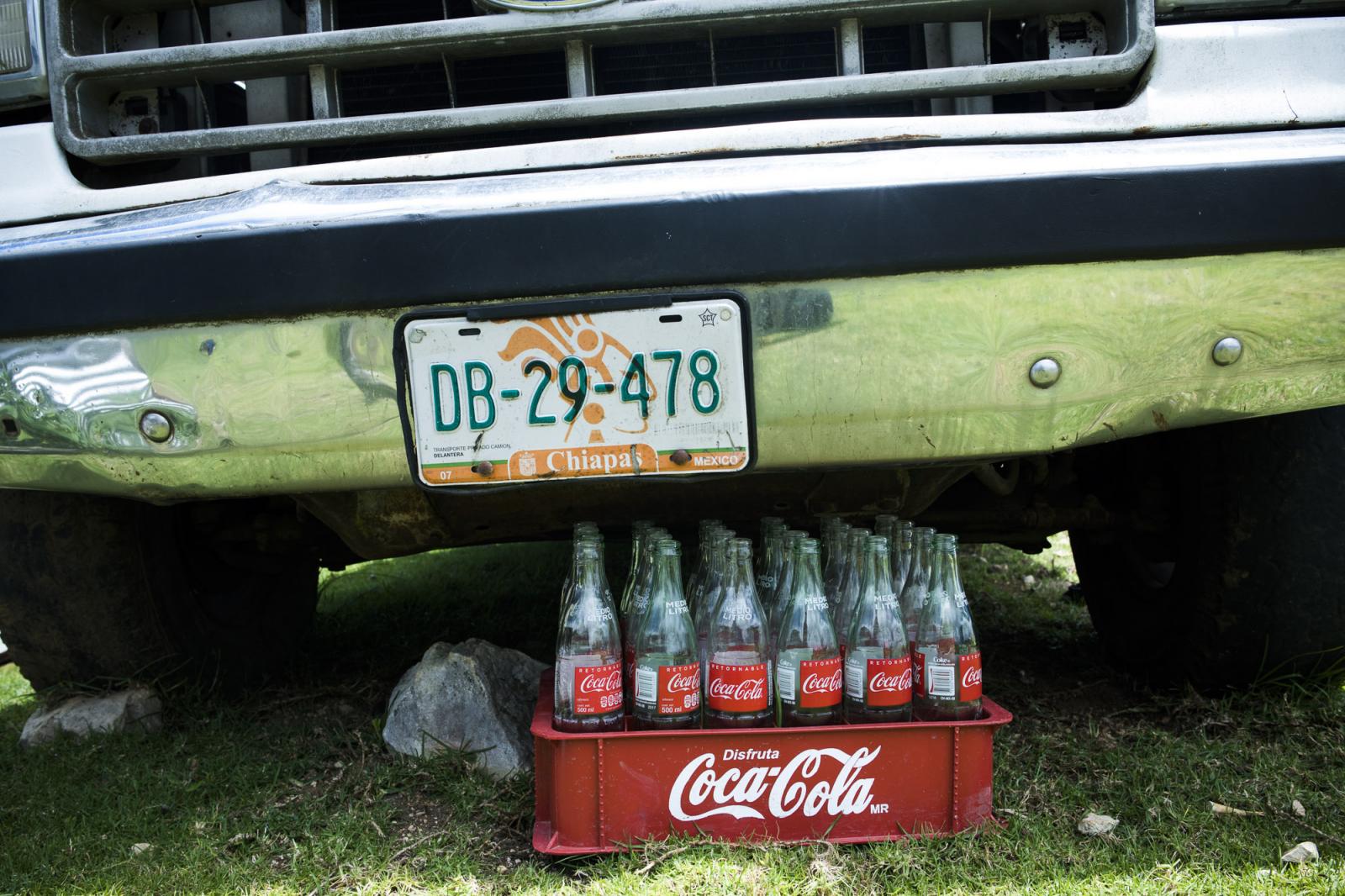 6 of 22 © 2021 Diana Bagnoli
Soft drinks bottles are everywhere in Chiapas. Parking in a house of El Pinar community, close to San Cristobal 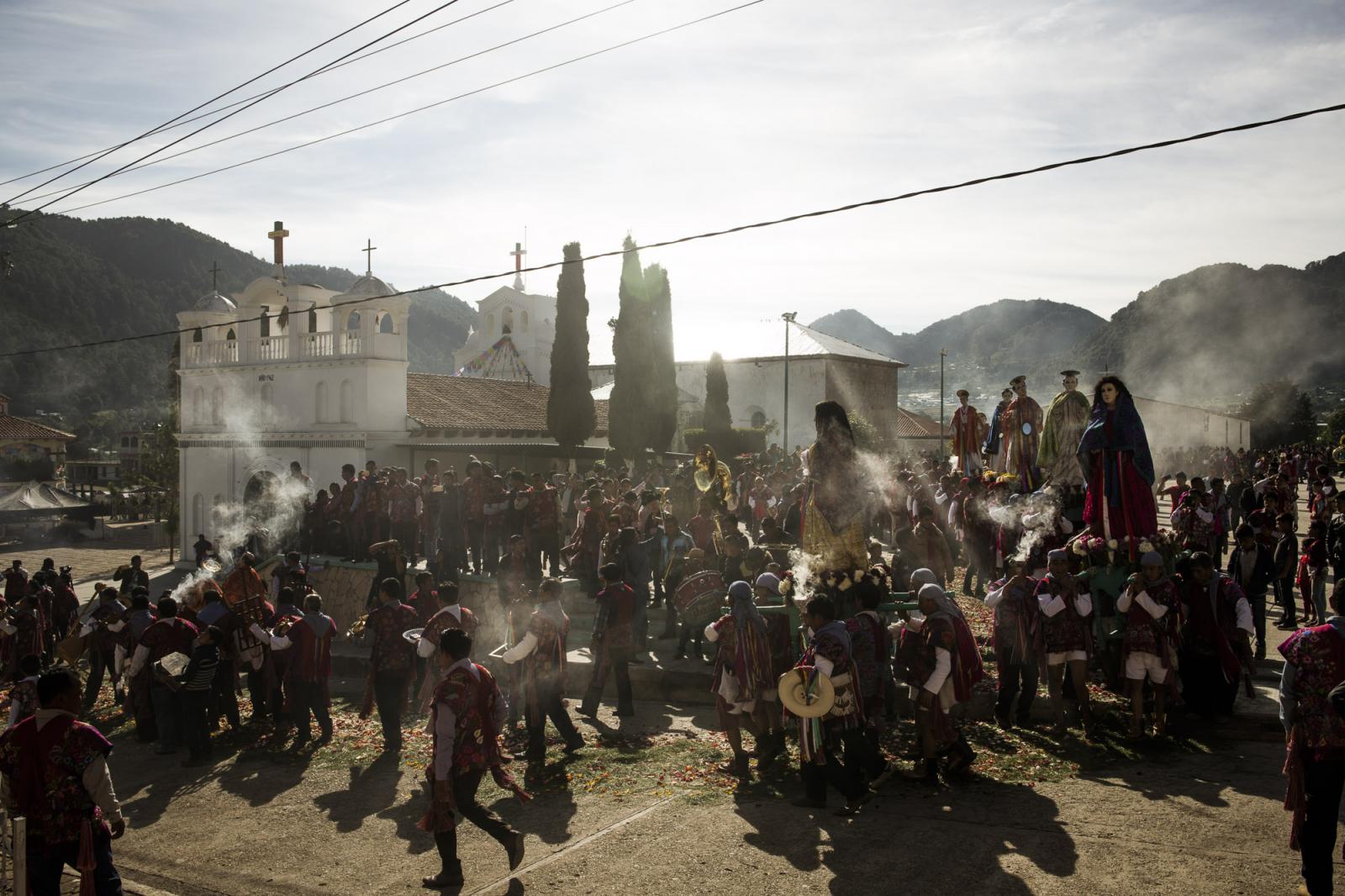 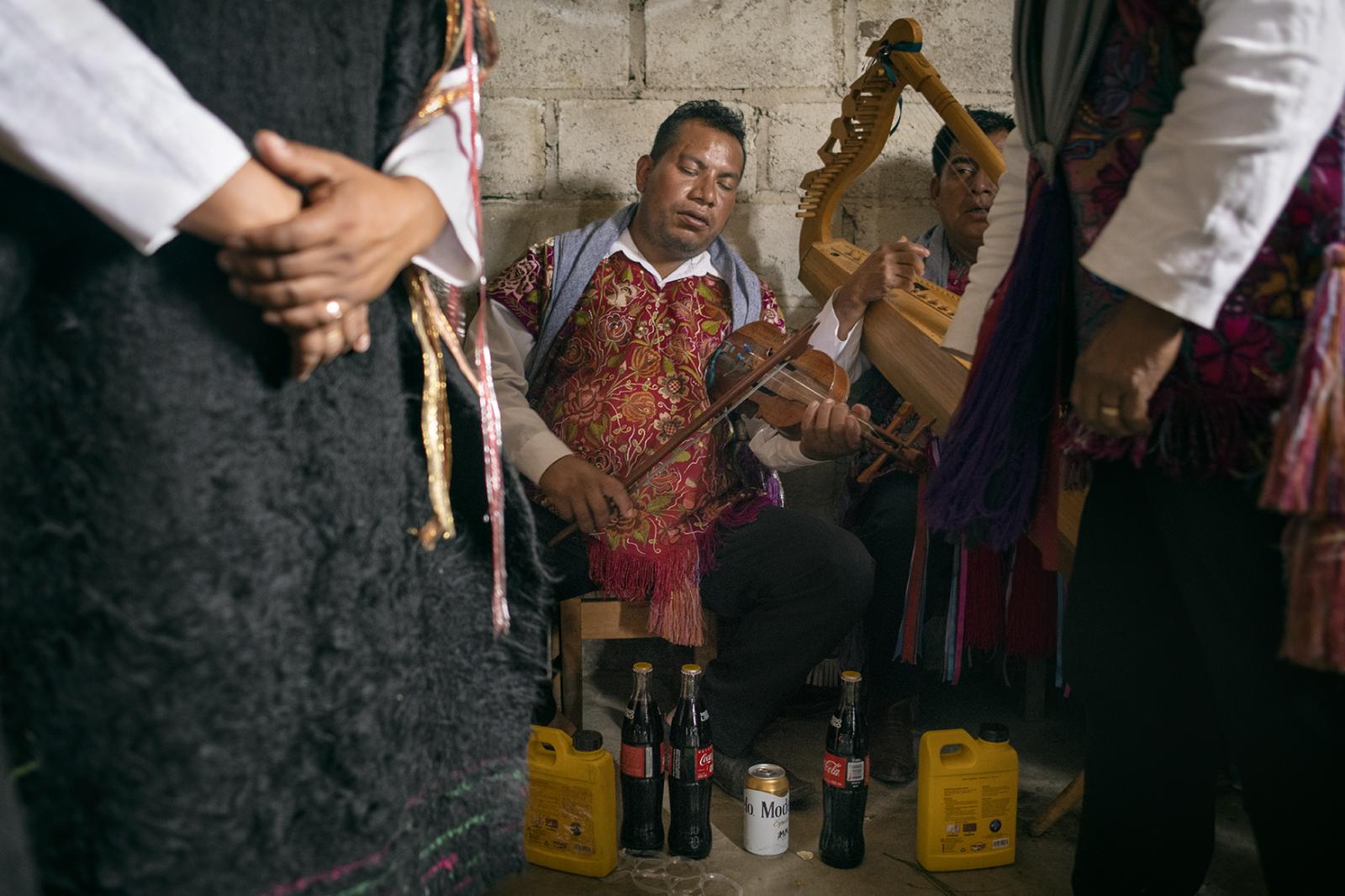 8 of 22 © 2021 Diana Bagnoli
In the village of Zinacantan people celebrate dancing, praying, singing and drinking alcohol and soft drinks 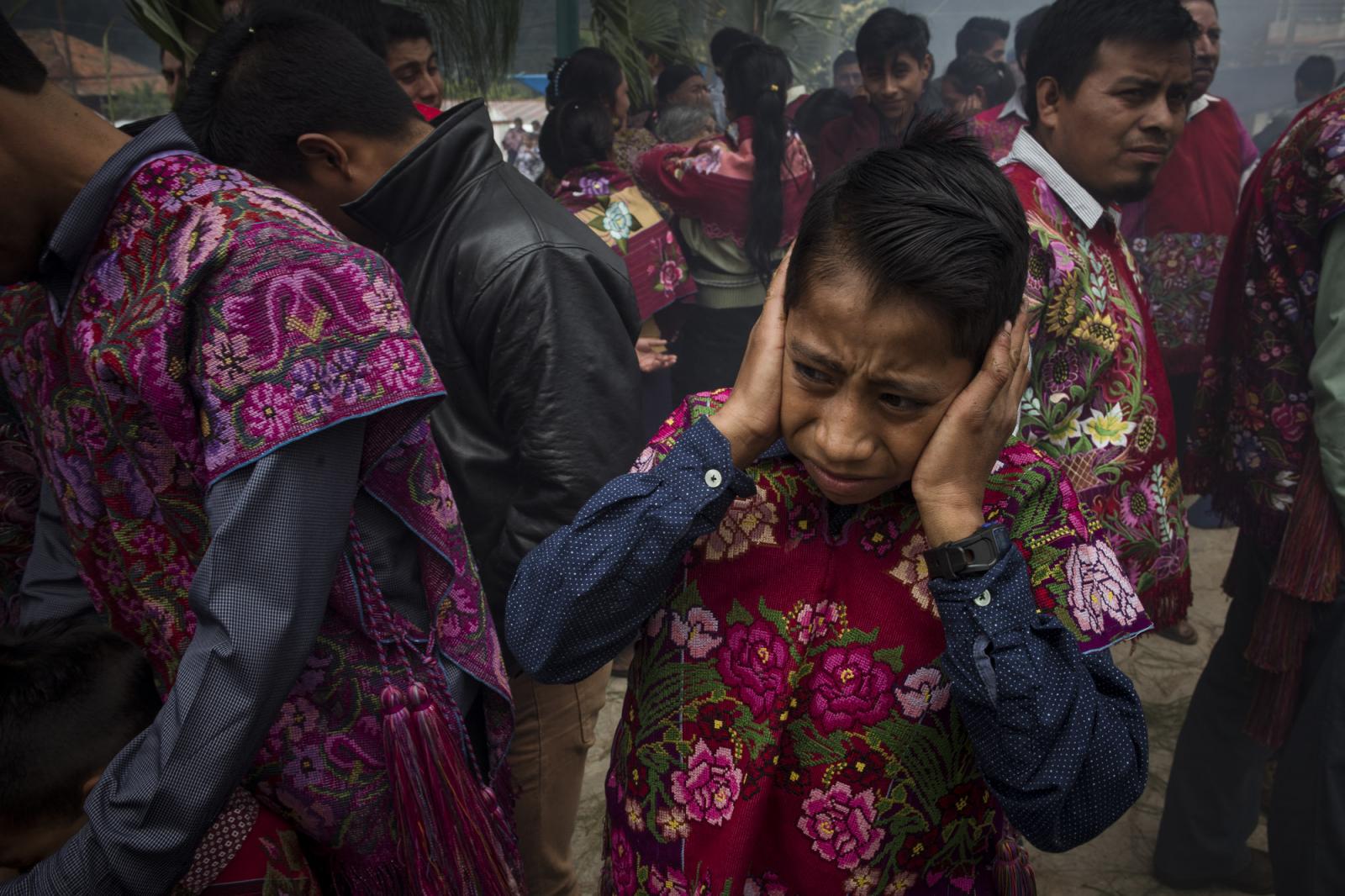 9 of 22 © 2021 Diana Bagnoli
A boy is protecting his ears from the sound of firecrackers, Zinacantan 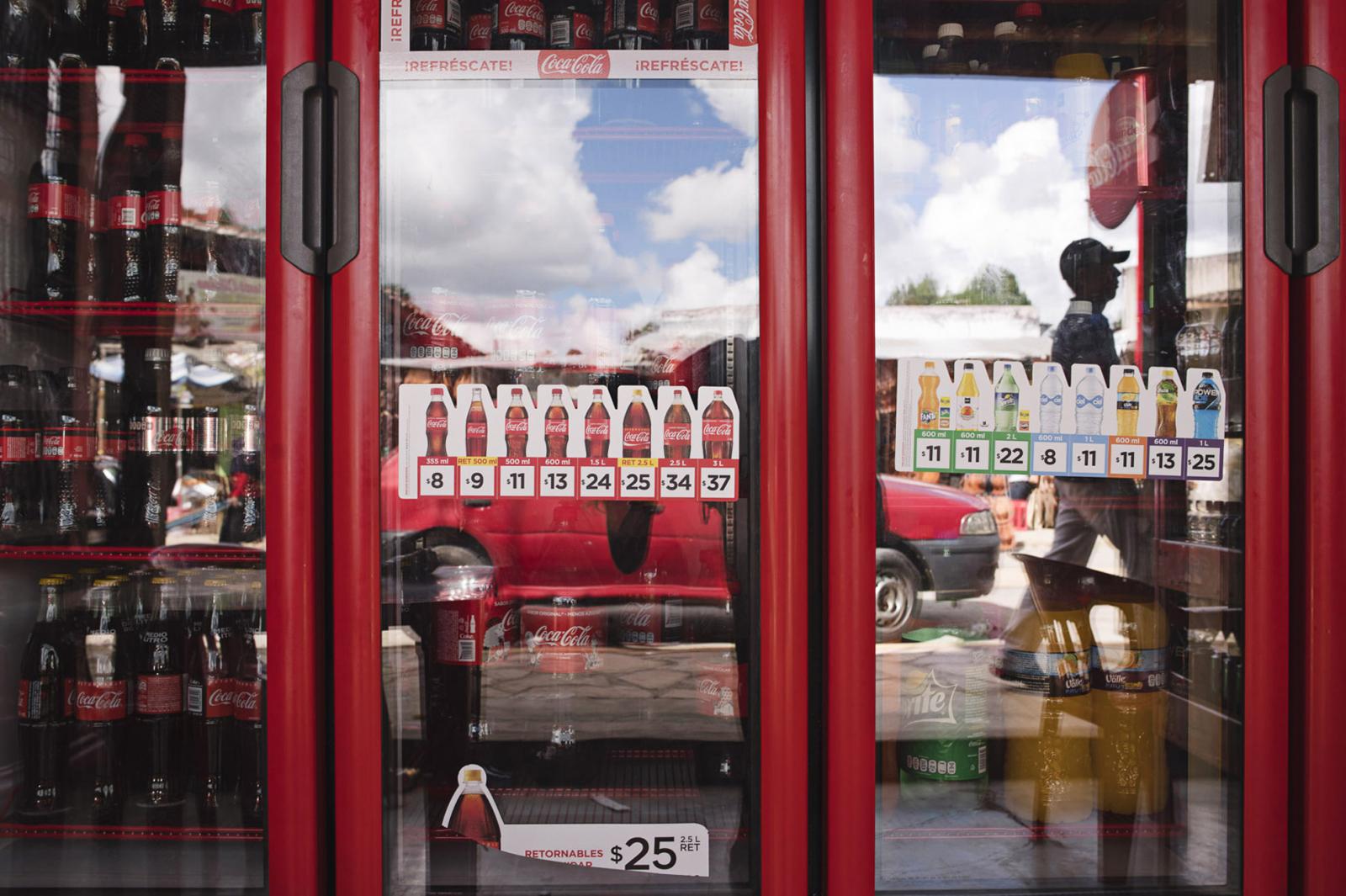 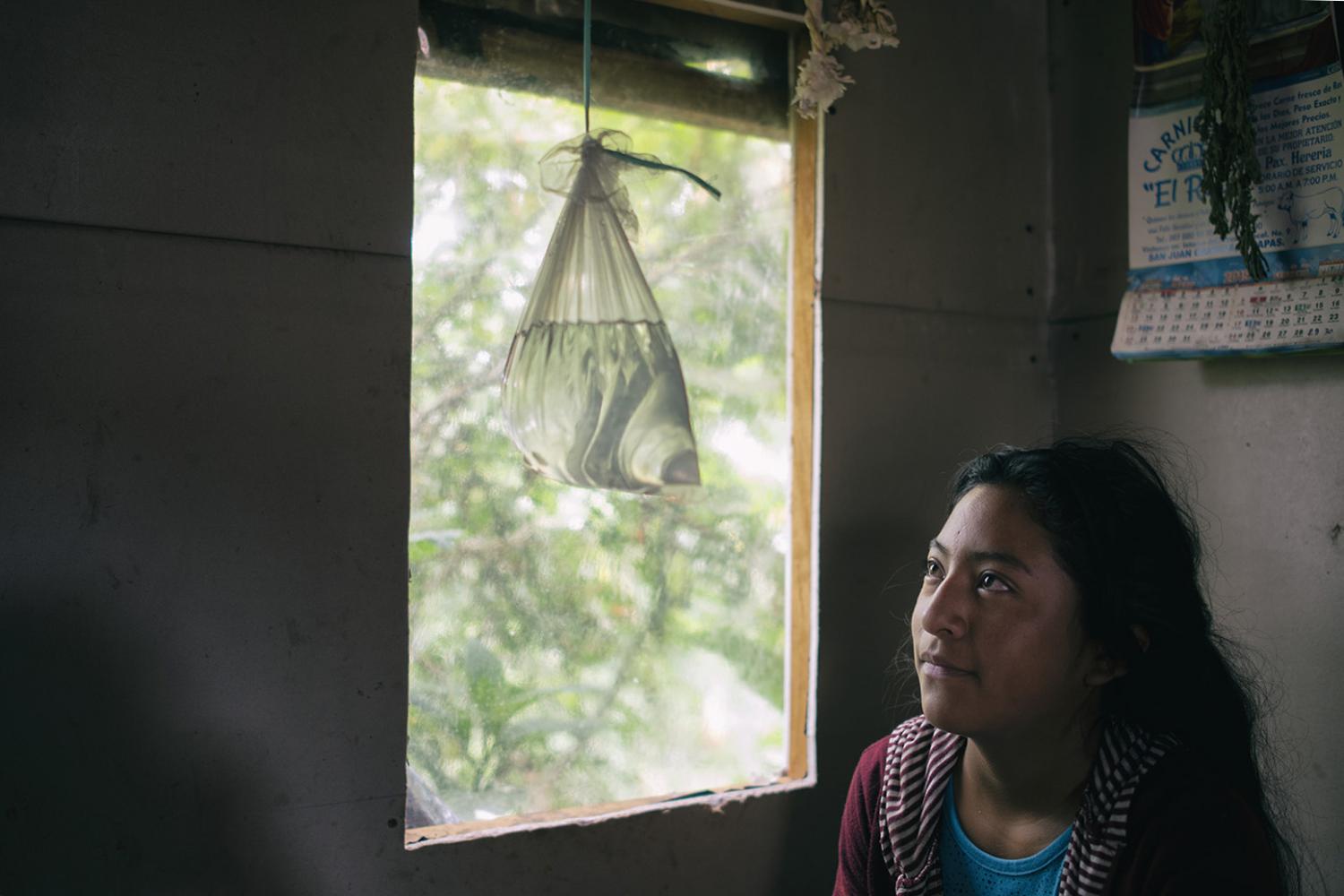 11 of 22 © 2021 Diana Bagnoli
Local people collect rainwater in a cistern and than  picks it up at home in a plastic bag. 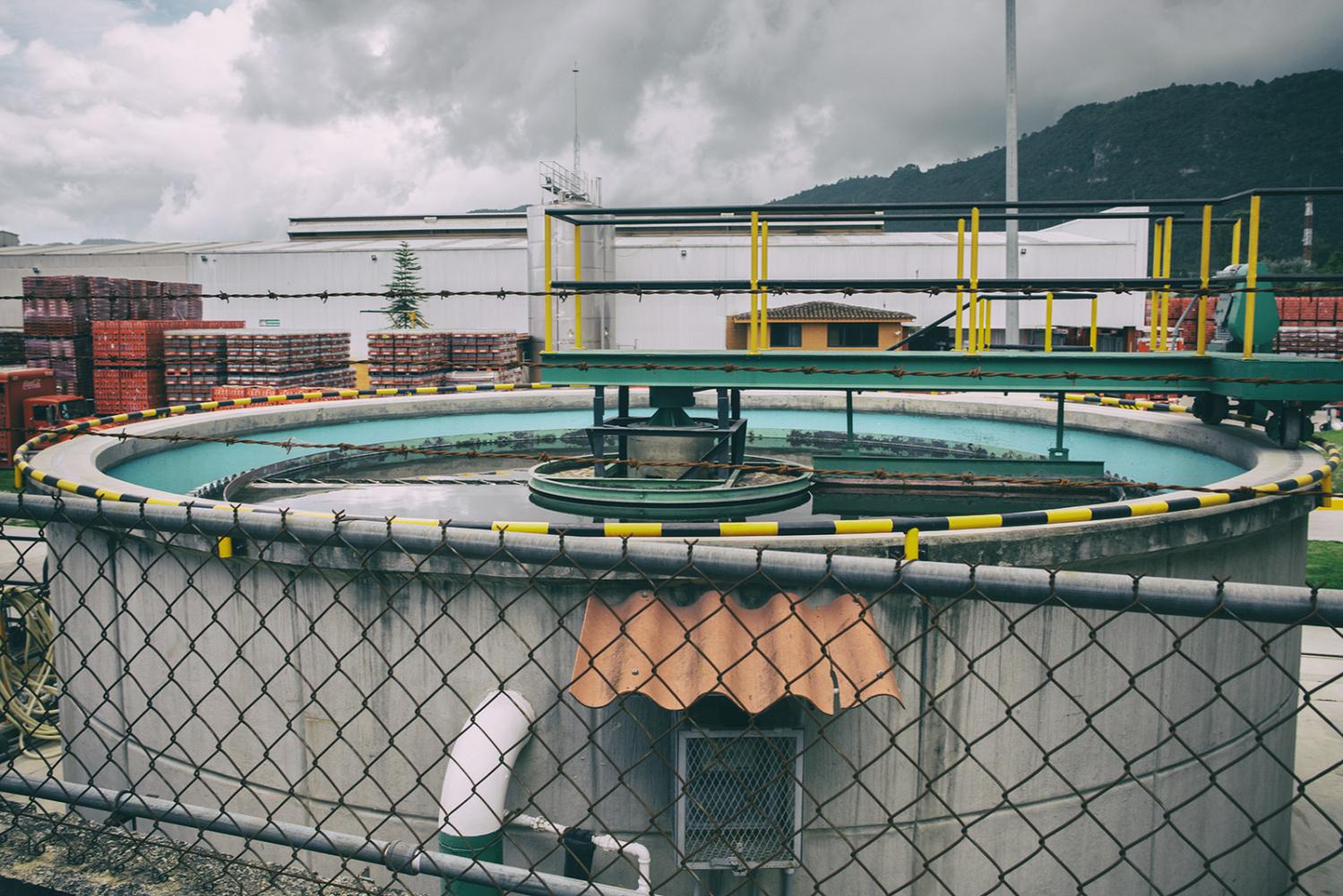 12 of 22 © 2021 Diana Bagnoli
The well wich extract fresh water from a volcano basin. The plant has permits to extract more than 300,000 gallons of water a day as part of a decades-old deal with the federal government that critics say is overly favorable to the plant’s owners. 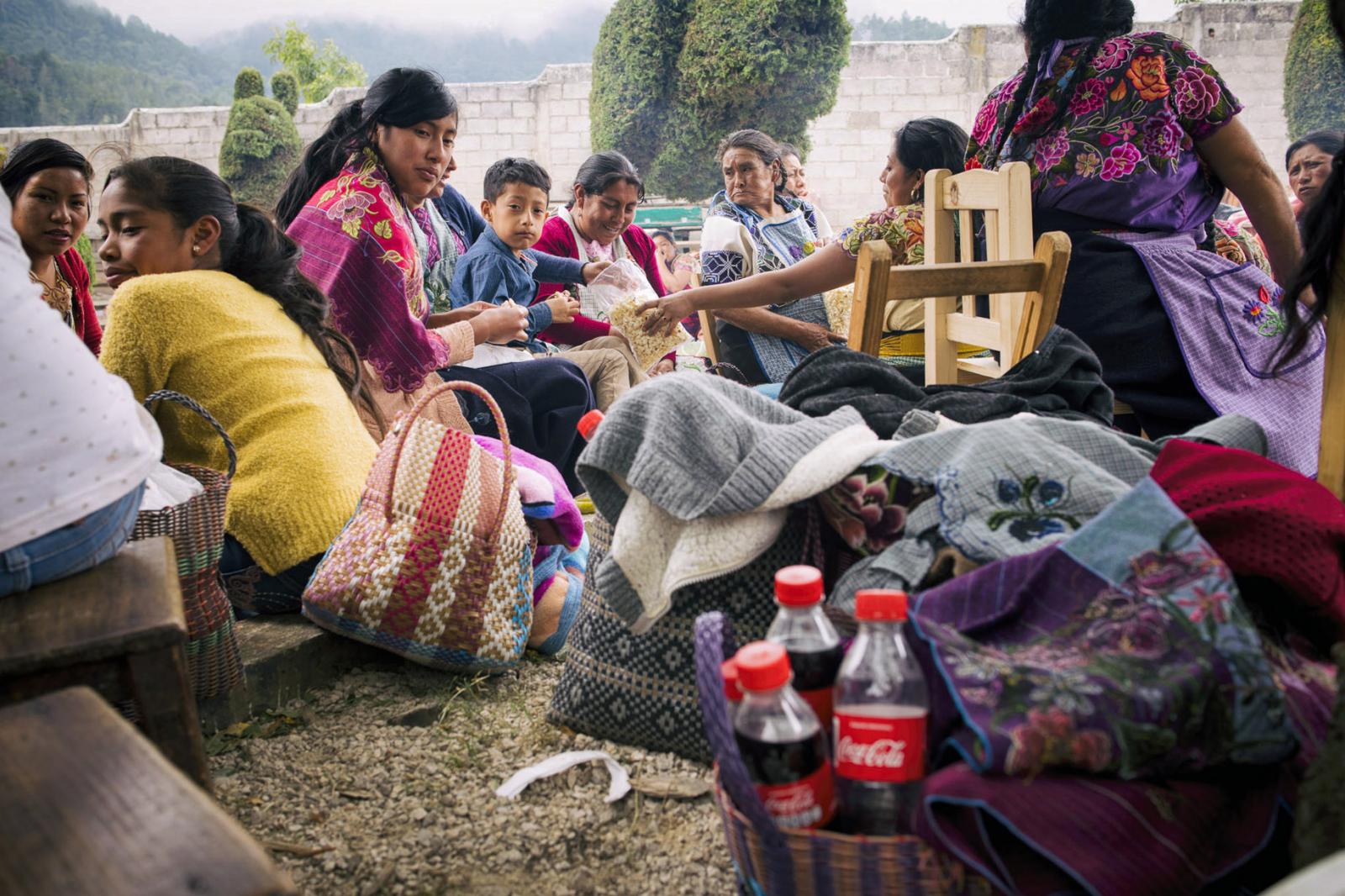 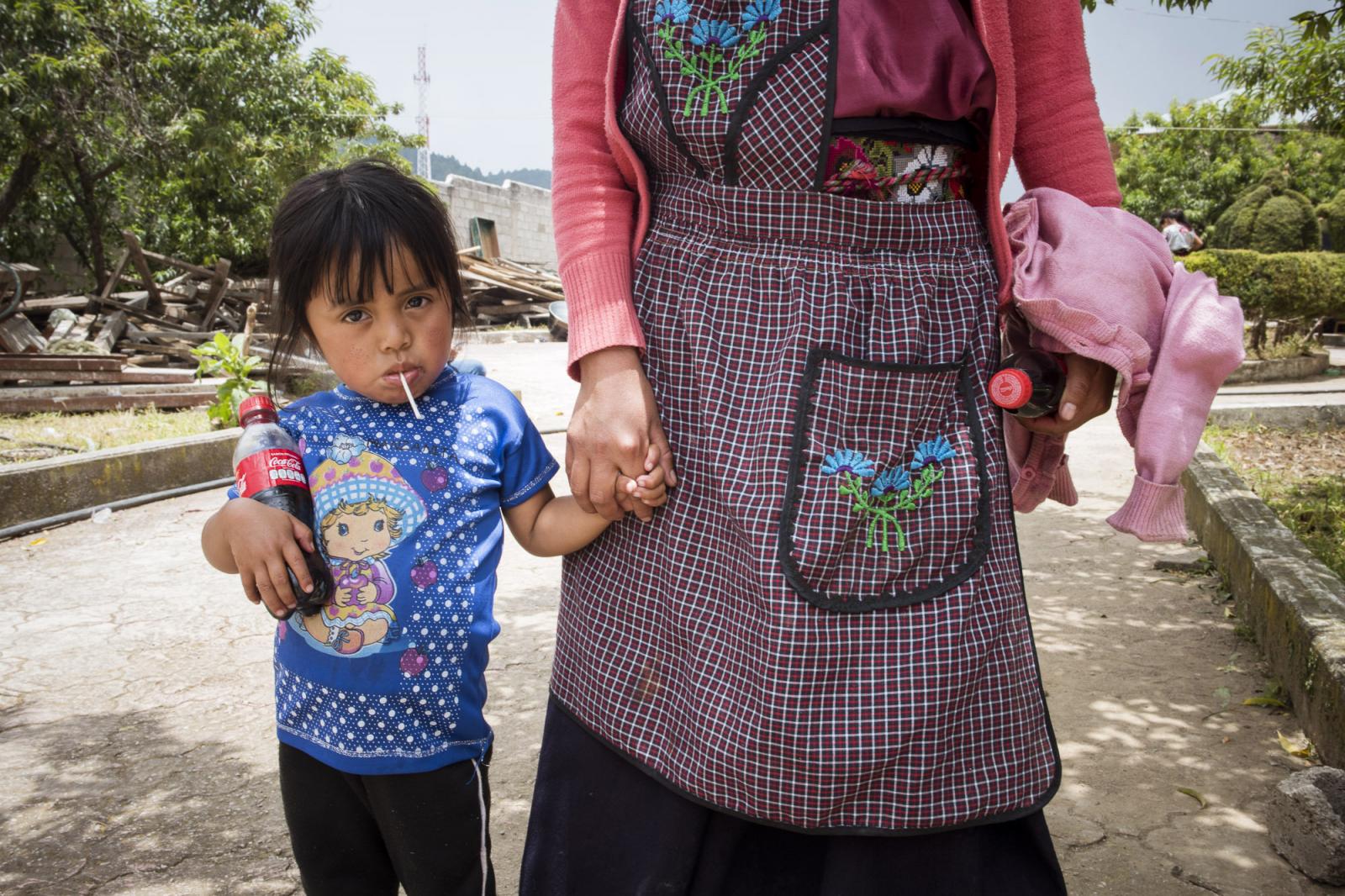 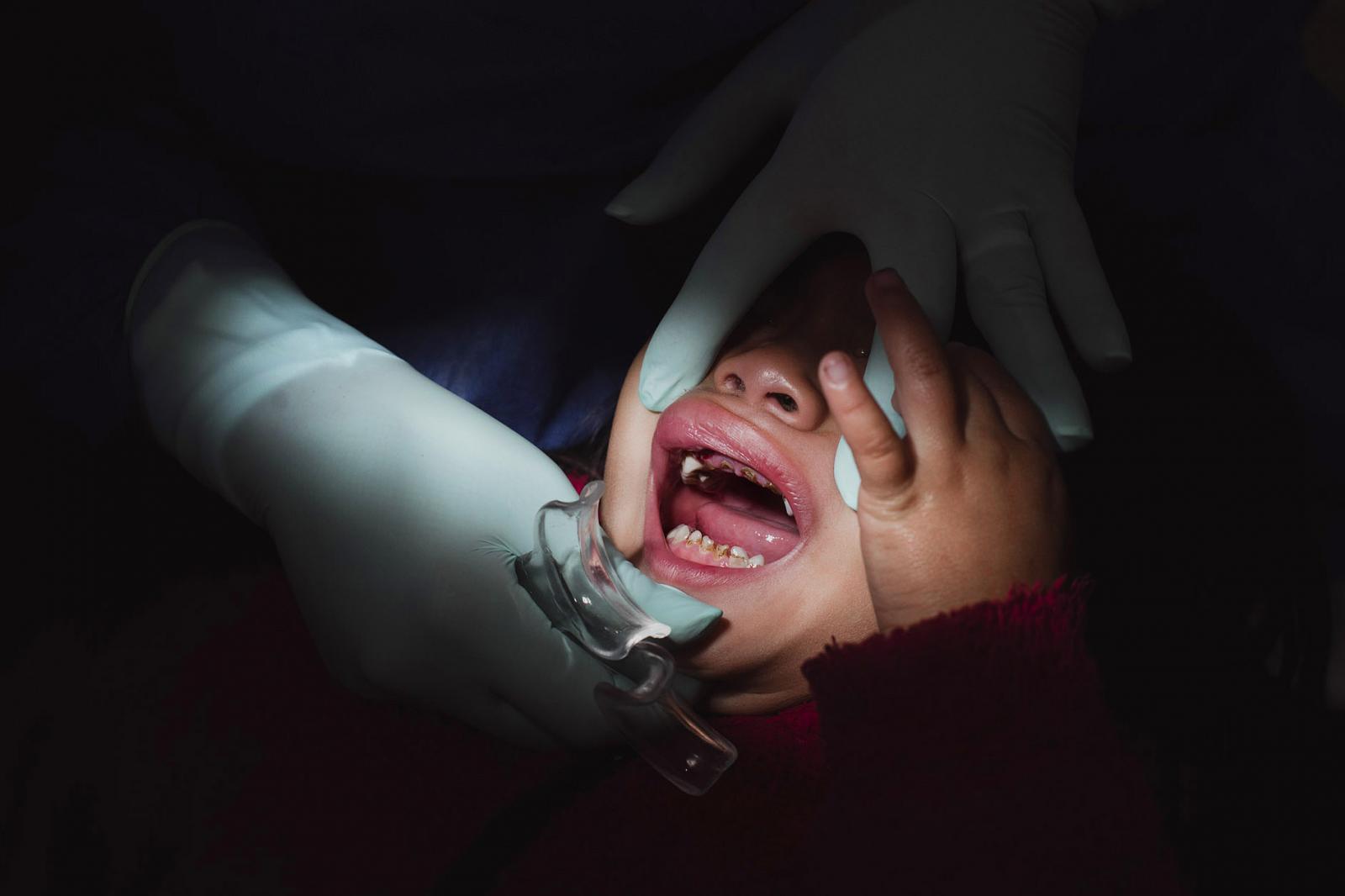 15 of 22 © 2021 Diana Bagnoli
Tania, 3 years old, she always has had cocacola, she has already 4 milk teeth to be removed and the others to be rebuilt 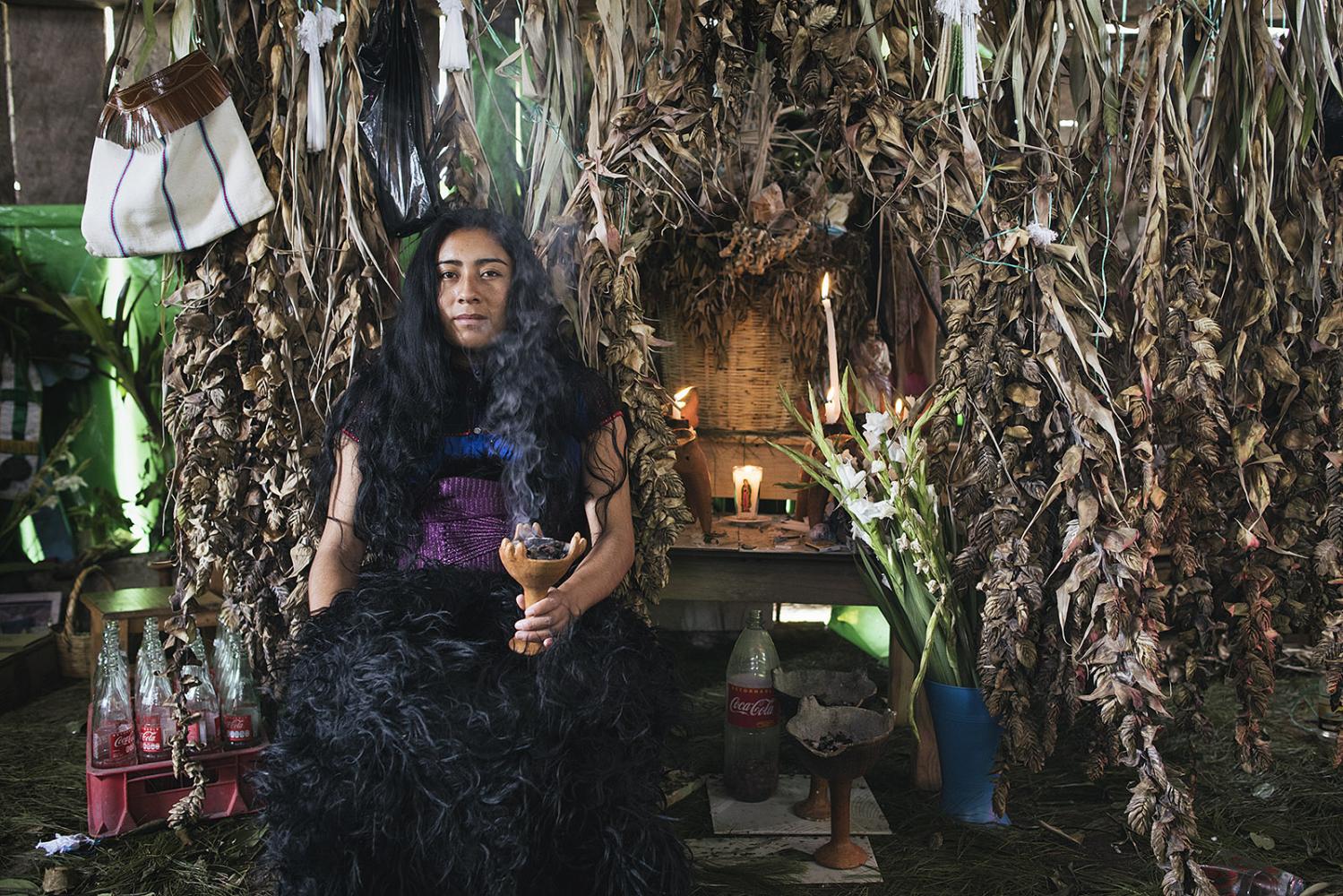 16 of 22 © 2021 Diana Bagnoli
Rocio posing in front of her altar at home, in a community close to San Cristobal. 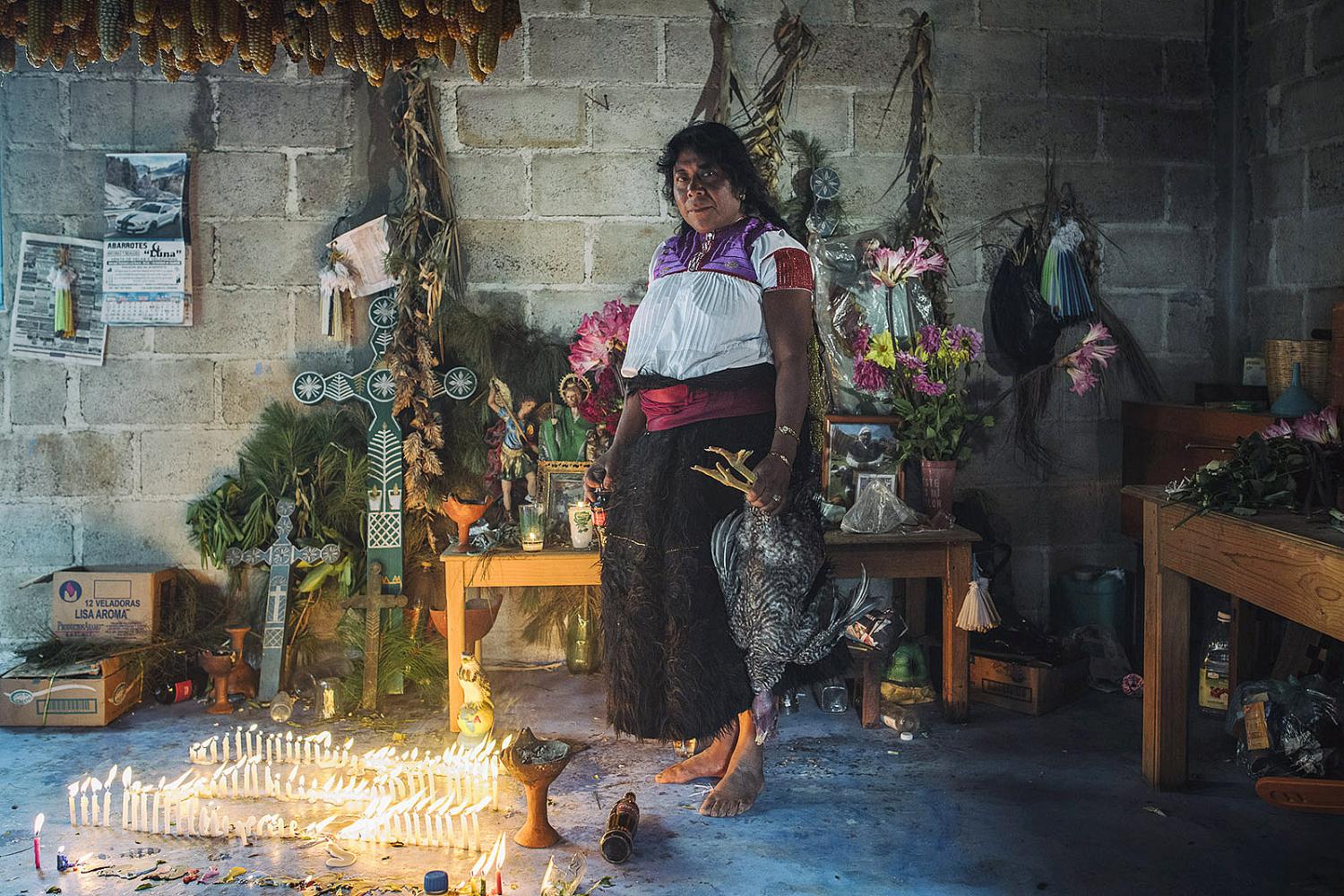 17 of 22 © 2021 Diana Bagnoli
Pascuala is a healer called the "pulsadora", it means she heals feeling the heart beating by the pulse. She was healing her nephiew. Since several years she introduced the soft drink in her ceremonies, as "CocaCola is sweet so the spirts will appreciate it and  it also have certain healing properties" she says. 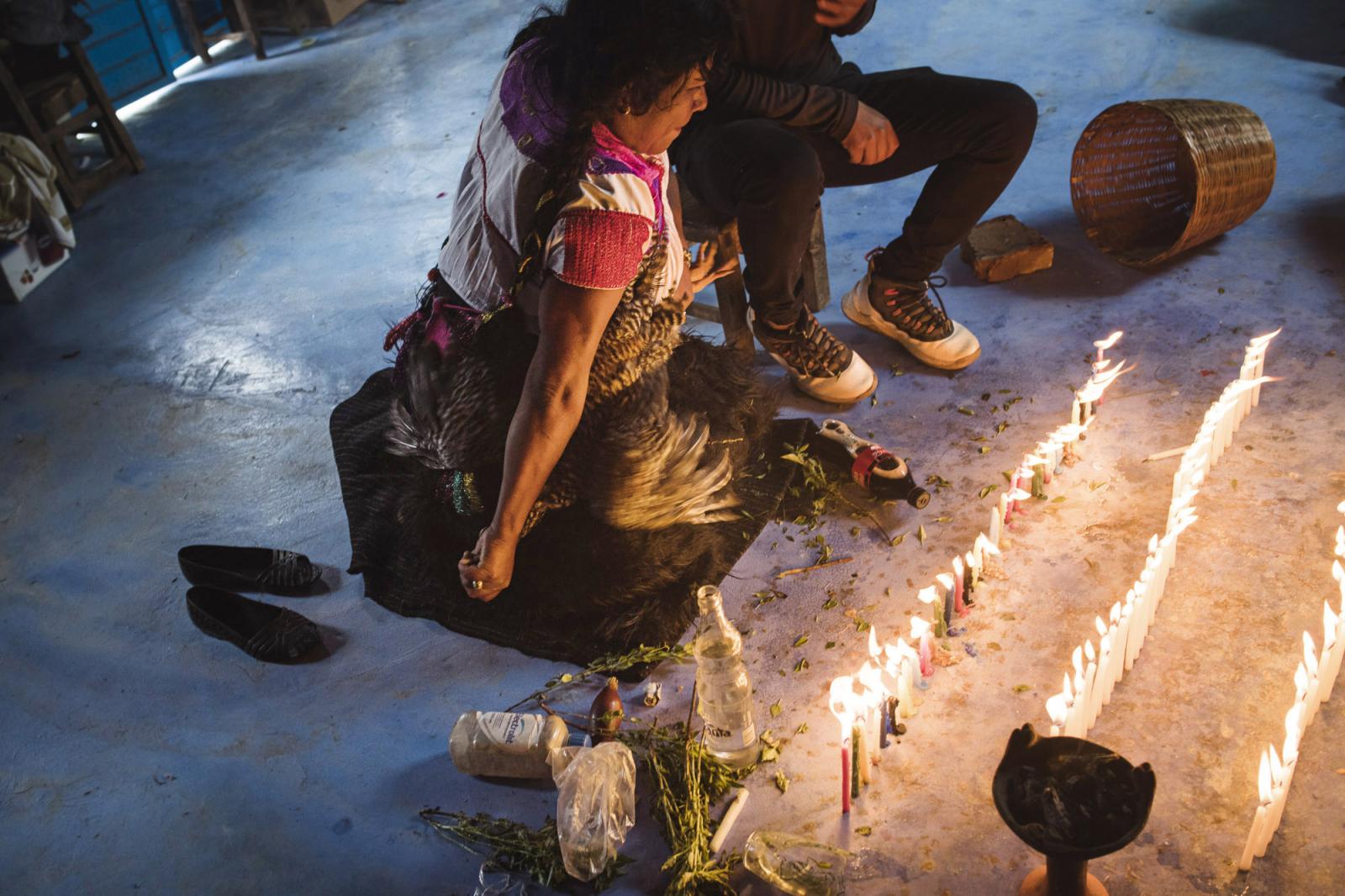 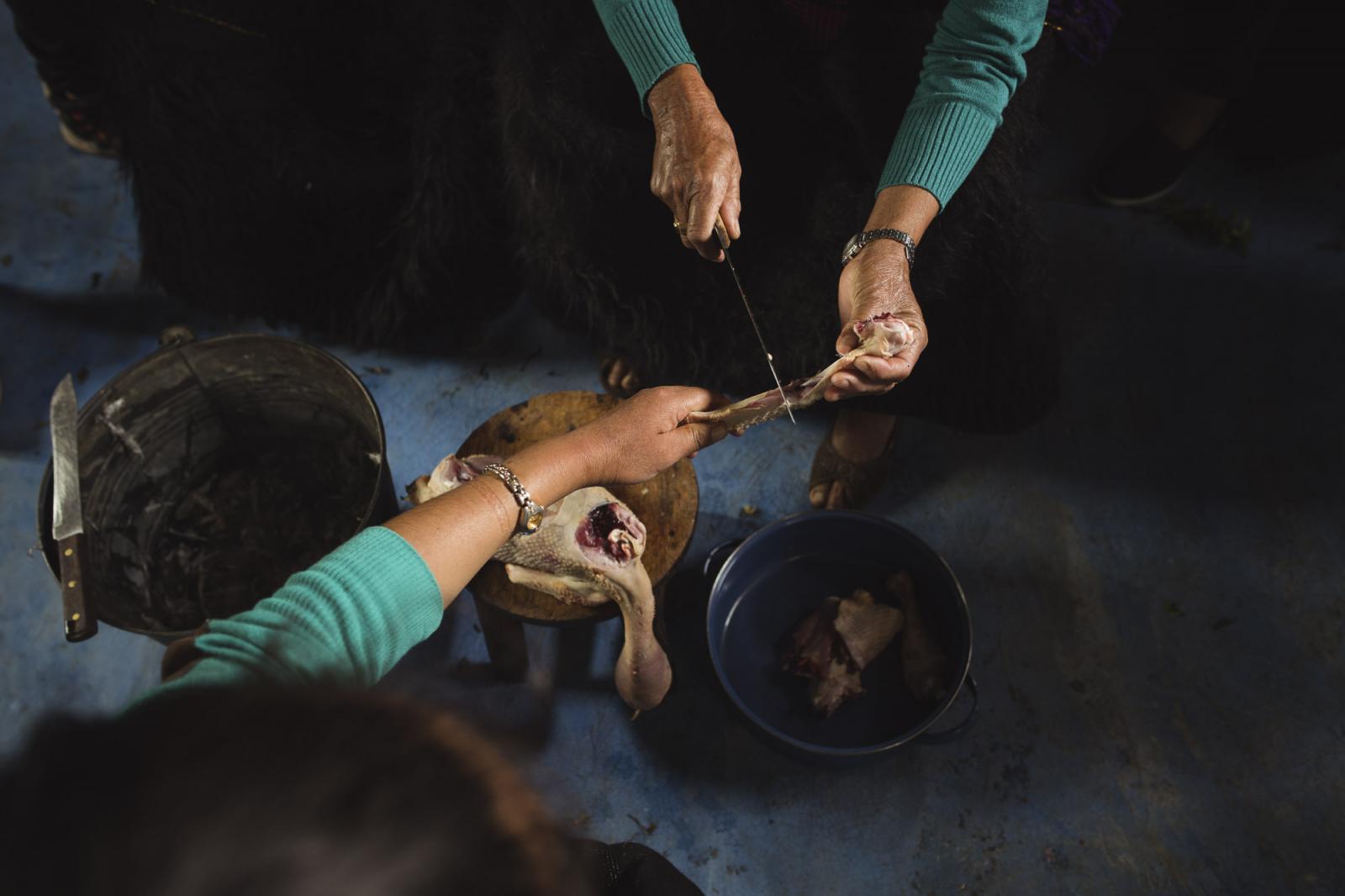 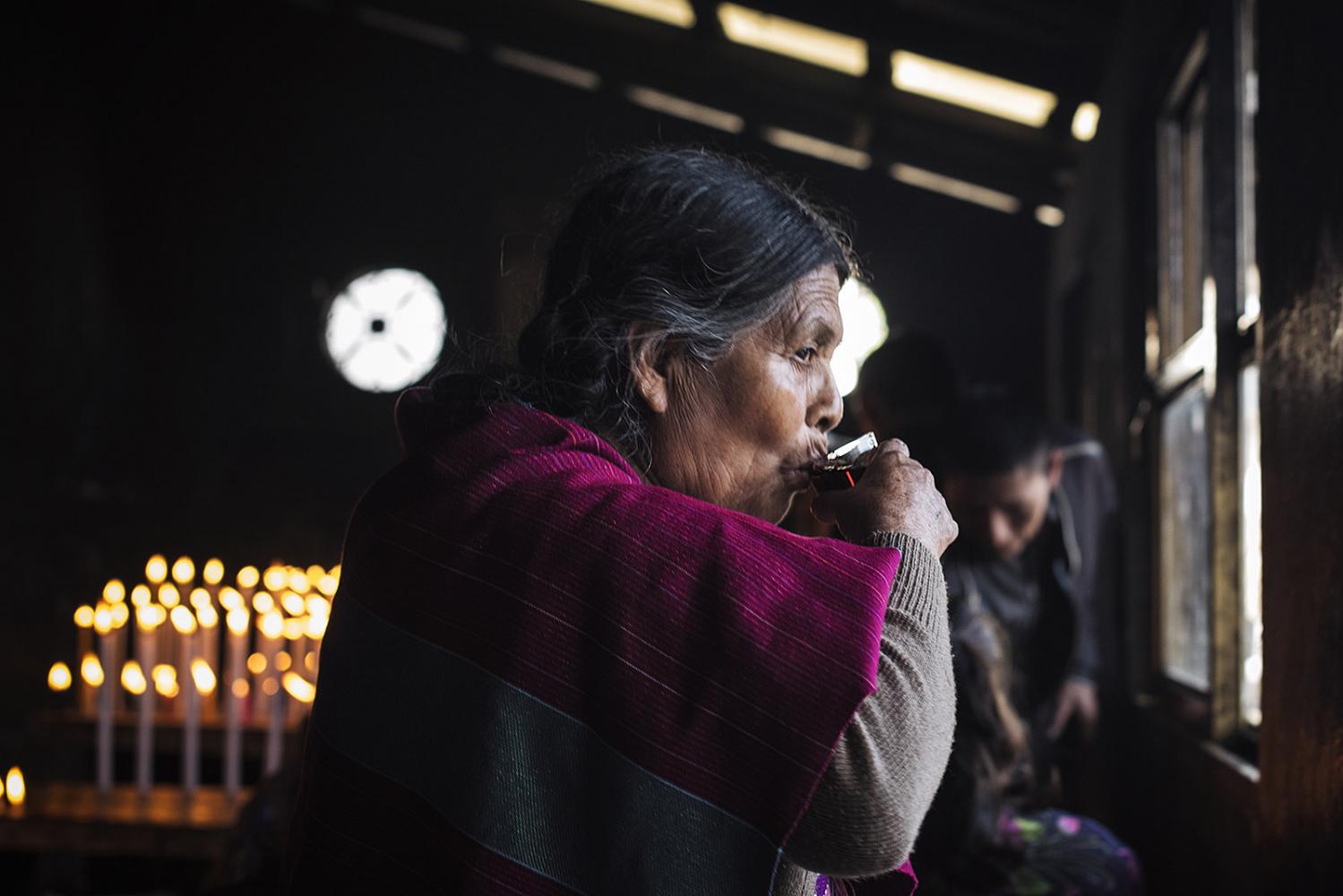 20 of 22 © 2021 Diana Bagnoli
in a church in San Cristobal. Indigenous people have their own altar where praying the Virgin Mary together with the spirits of nature, the healers work with energies and sacrifices of chickens and use soft drinks instead of the traditional posh, a very alcoholic drink prohibited by the Catholic church. 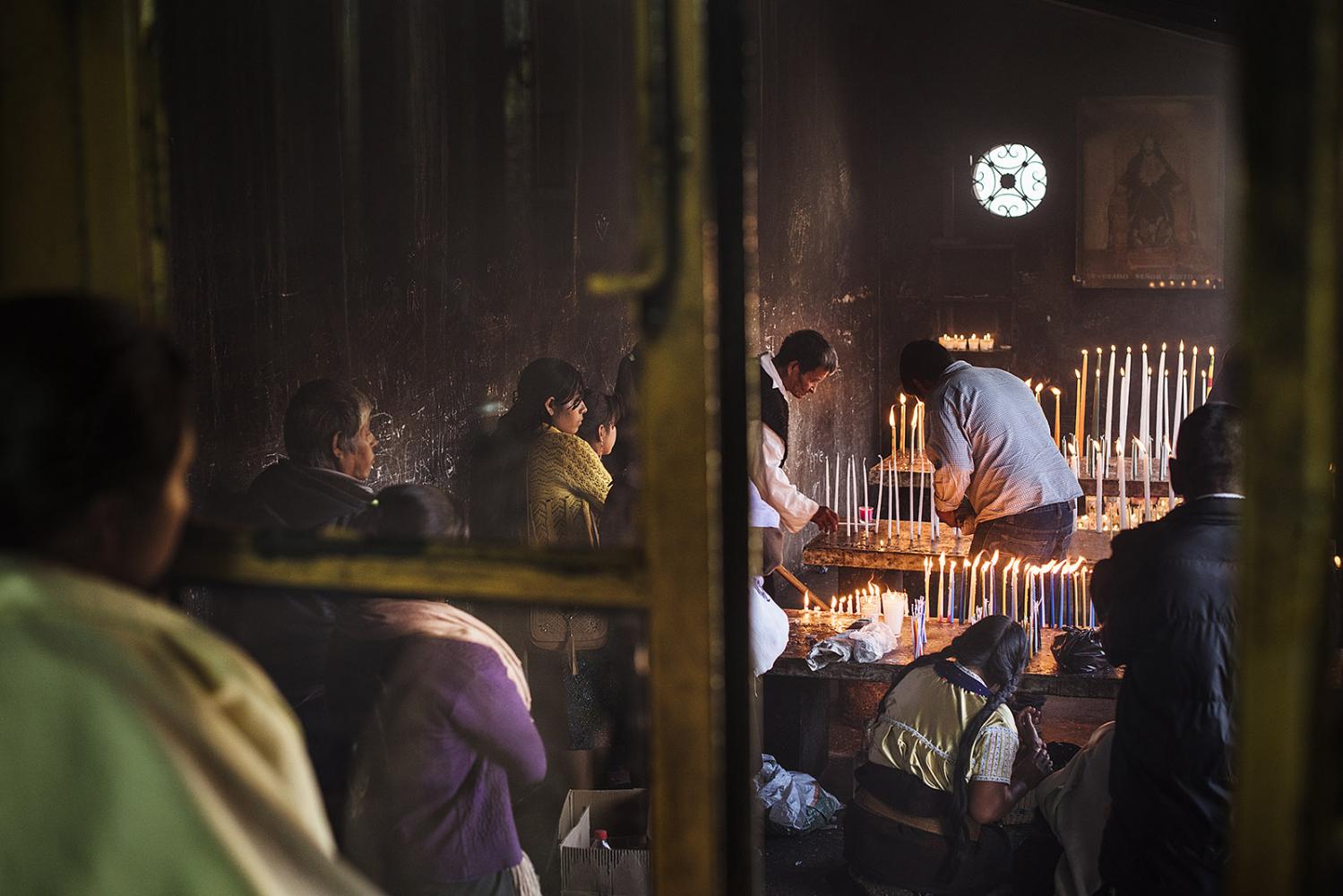 21 of 22 © 2021 Diana Bagnoli
Indigenous people have their own altar where praying the Virgin Mary together with the spirits of nature, the healers work with energies and sacrifices of chickens and use soft drinks instead of the traditional posh, a very alcoholic drink prohibited by the Catholic church. 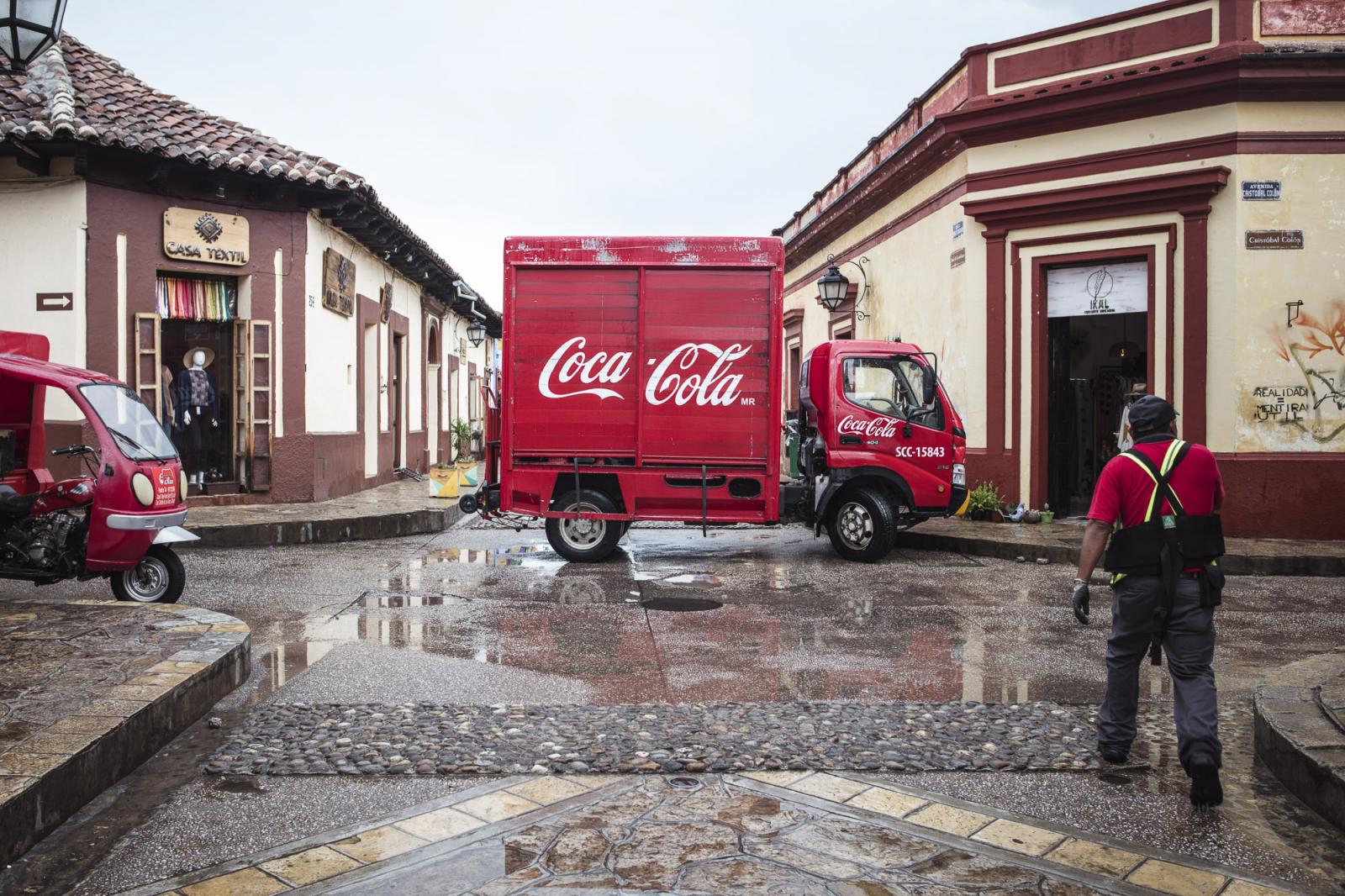 22 of 22 © 2021 Diana Bagnoli
Coca cola van in the narrow streets of San Cristobal
Public Story
SAINT COCA-COLA
Copyright diana bagnoli 2021
Date of Work 07/01/19 - 08/31/19
Updated 10/31/19
Location Chiapas, Mexico
Archived as Conceptual, Documentary, Editorial, Environment, Fine Art, Food, Health/Healing, Human Rights, Landscape, Latin America, Photography, Photojournalism, Portraiture, Poverty, Spirituality, Water
Chiapas, Mexico, August 2019
Chiapas has the highest rate of Coca Cola consumers in the
world. Potable water is increasingly scarce, some villages don’t even have
running water.
Thus, many residents drink Coca-Cola produced by a local plant, easier to
find than bottled water and as almost as cheap.
Since the arrival of soft drinks in Chiapas, half a century ago, the
beverages have been so intertwined with the local culture that they
become part of the spiritual ceremonies, along with incense, candles, and
chickens to scarify. People use Coca-cola while praying and believe in its
healing power. "As our world is changing, the spiritual world changes in
the same way,” natural healers say.
In the meantime, diabetes and dental diseases have become a severe
problem for the population, which was once used to a very simple diet.
The mortality rate from diabetes in Chiapas increased enormously.
The mismanagement of local resources and the water system problems,
exacerbated by climate change and water shortages, open the doors to
massive and harmful use of soft drinks. This reportage focuses on how
indigenous life and rituals in Chiapas changed facing modern life.

By diana bagnoli / milan — Maternity and giving birth at the time of the Corona Virus-19 In the Covid hospitals, maternal child wards..
Nov 24, 2020

By diana bagnoli — TEHUACAN, THE CITY OF THE BLUE TOXIC WATER Factories in Tehuacán, Mexico, produce distressed denim for..
Apr 23, 2018

By diana bagnoli / senegal miomp casamance — THE BUKUT, Casamance, August 2016. Summer time in a small village of Casamance, the southern and more..
Jan 5, 2017

By diana bagnoli / cusco — PERUVIAN CURANDEROS OF THE ANDES Pre Columbian traditional medicine has, for centuries, relied on the..
Jan 3, 2017

By diana bagnoli — MAYANTUYACU In the heart of the Amazon rainforest, on the banks of boiling springs and in the shade of..
Dec 19, 2016

By diana bagnoli — THOSE WHO REMAIN, MOTHERS OF THIAROYE SUR MER "To leave is a matter of survival. Here there is no money, no..
Dec 17, 2016

By diana bagnoli — PERUVIAN CURANDEROS, FROM THE ANDES TO THE AMAZON Pre Columbian traditional medicine has, for centuries,..
Apr 29, 2016