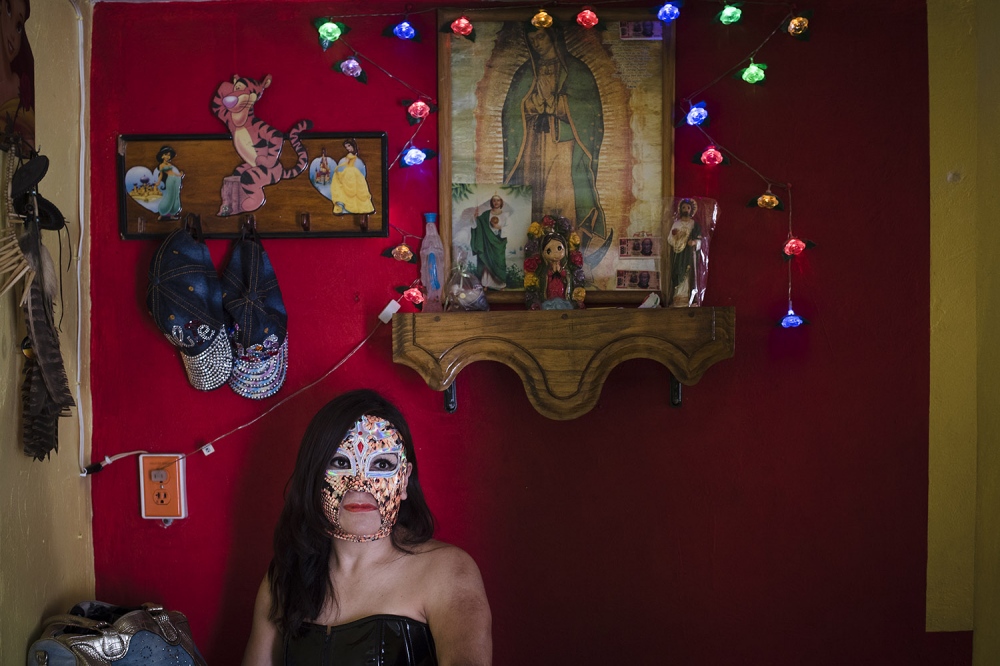 1 of 17 © 2022 Diana Bagnoli
Xenia, this is her wrestler name, is posing in her house.
She started fighting when she was 13-year-old with the dream to achieve a better life. She
is now 45. Her first husband was abusive and didnâ€™t allow her to fight. It took her 14 years
to get out from that marriage and get back on the ring. 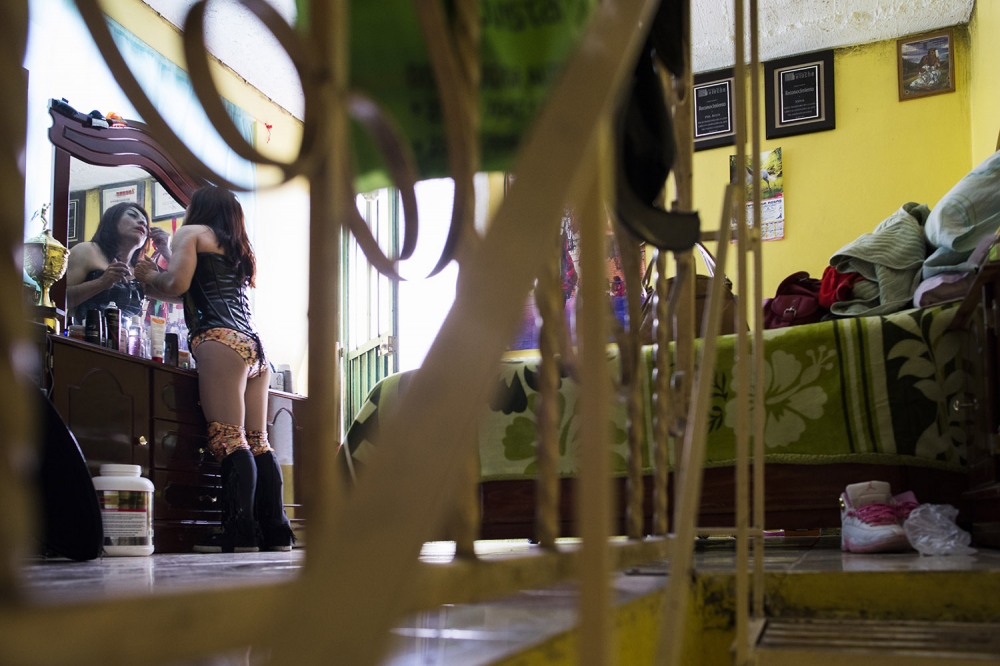 2 of 17 © 2022 Diana Bagnoli
Xenia preparing herself before wearing her mask, her realÂ identity is hidden. 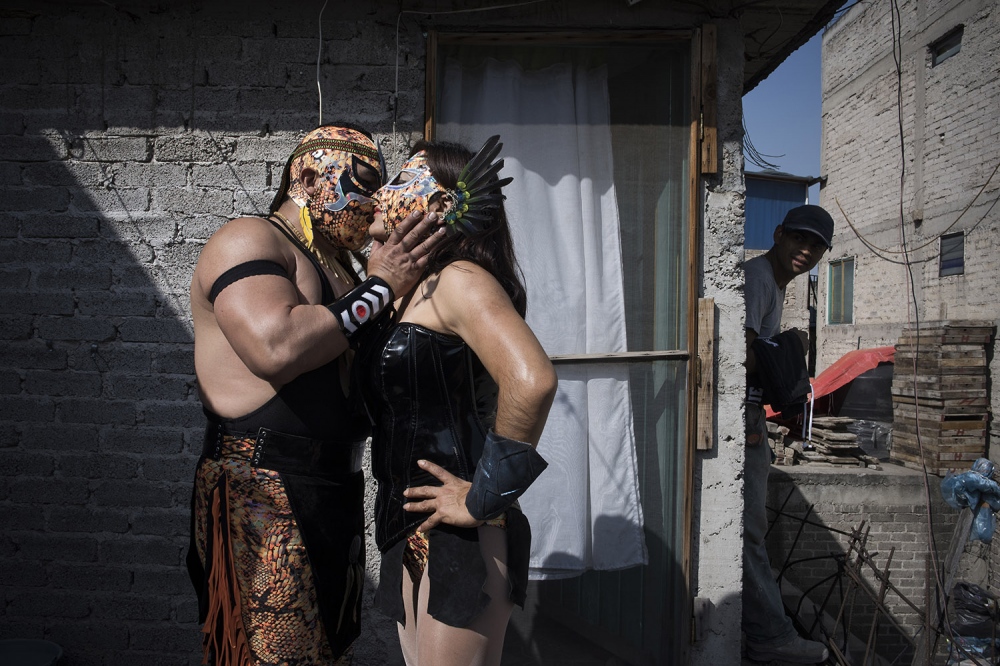 3 of 17 © 2022 Diana Bagnoli
Xenia kissing her new husband in the backyard of their house in Mexico City, while her
third son is watching them. Her first husband was abusive and didnâ€™t allow her to fight. It
took her 14 years to get out from that marriage and get back in the ring. Here she met her
new husband, 20 years her junior 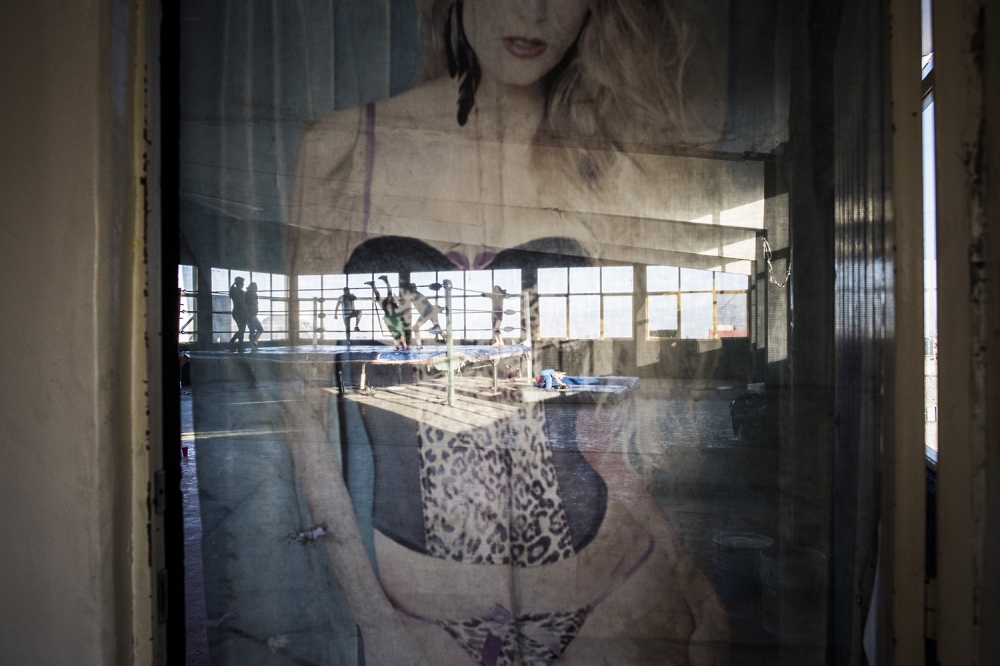 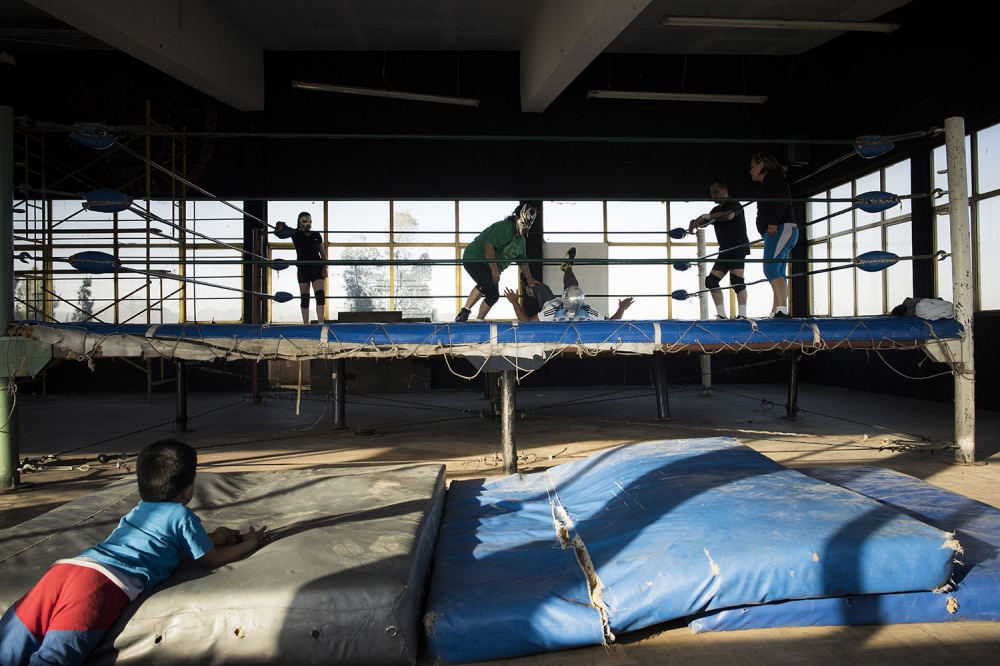 5 of 17 © 2022 Diana Bagnoli
A child is watching his mother's training in aÂ Mexico City's wrestling gym. 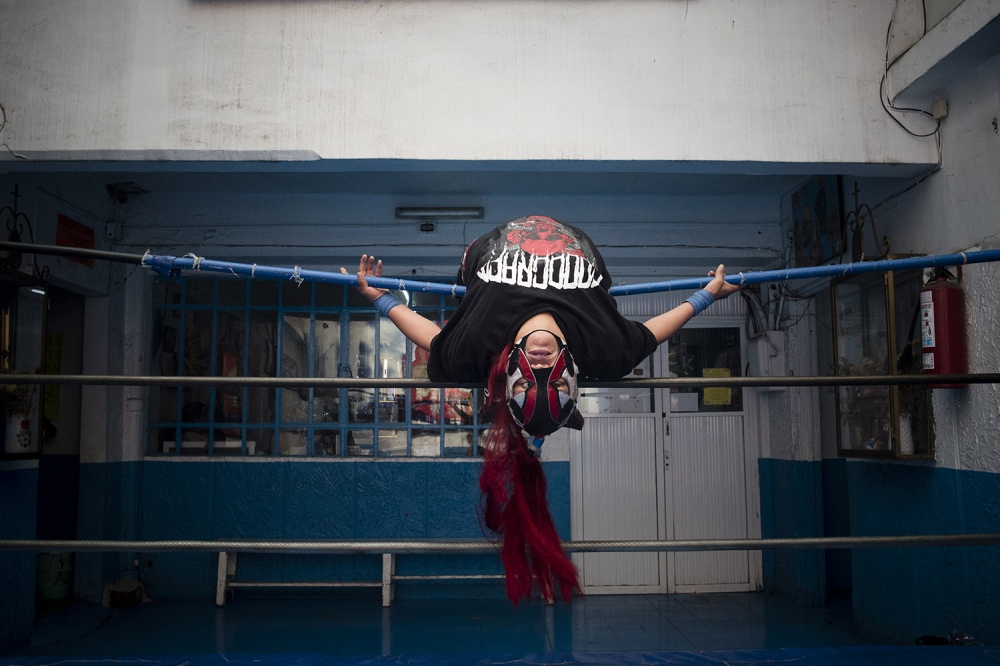 6 of 17 © 2022 Diana Bagnoli
Andromeda posing during her training in Ciudad de Mexico.
She was drug addicted and was an homeless since the age of 13, the fight saved her life.
She started in a recovery centre to learn how to defend herself.
Later she discovered that what she was training was lucha libre, wrestling, and that she
was good at it.
She said that itâ€™s very difficult to get taken seriously and get the same recognition men get.
What is expected of women in ring is to be sexy and beautiful first of her athletic training,
this is degrading.
Mitzy 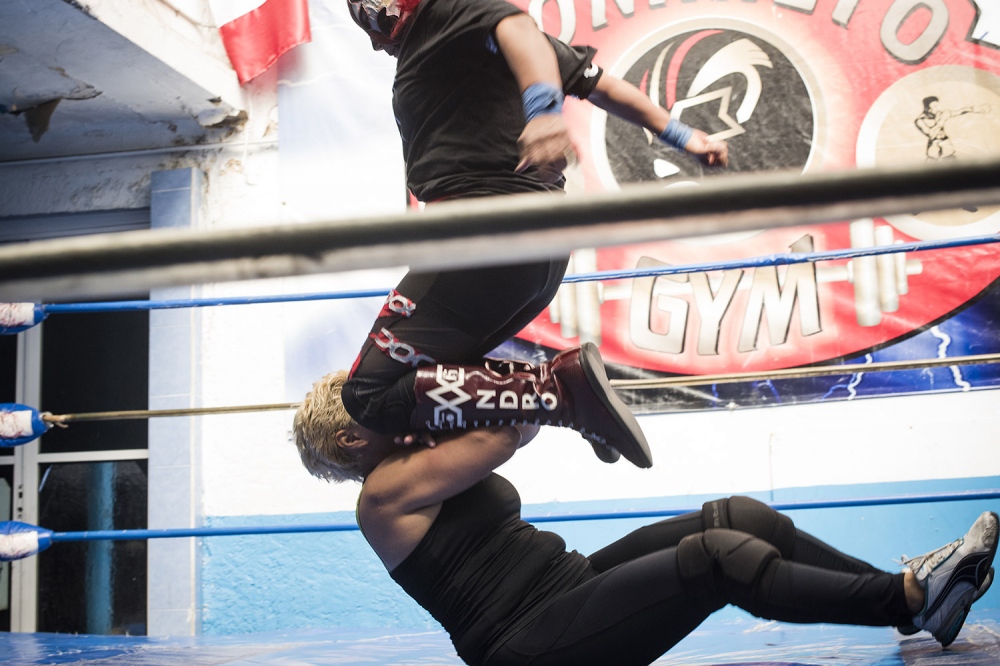 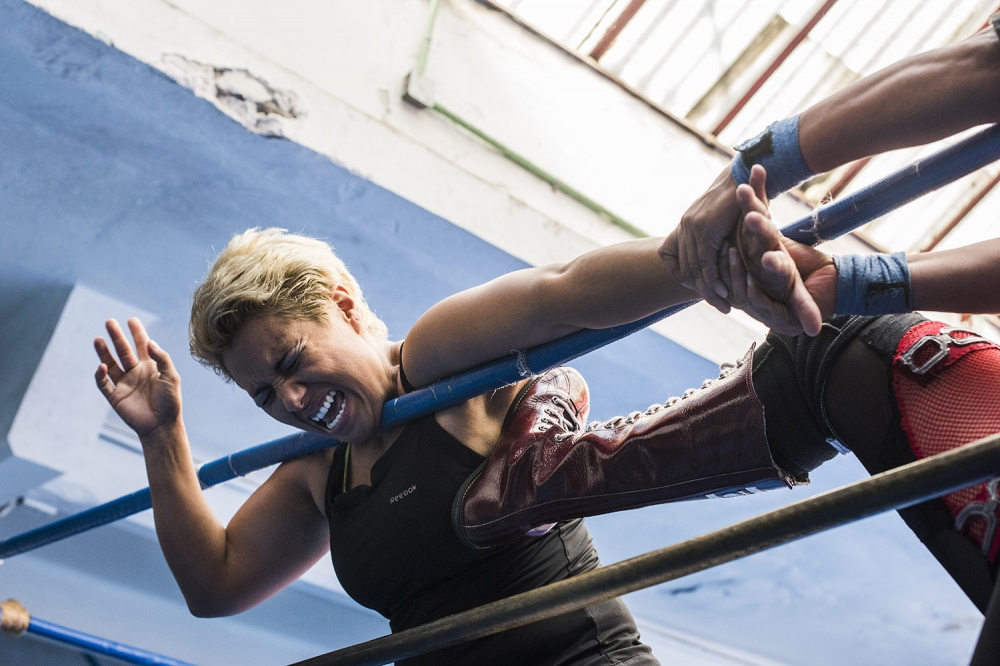 8 of 17 © 2022 Diana Bagnoli
Mitzy and Andromeda training in Ciudad de Mexico.
People will say it's staged but the way they perform is very physical. They hit each other
really hard, they train really hard, and they suffer a lot. 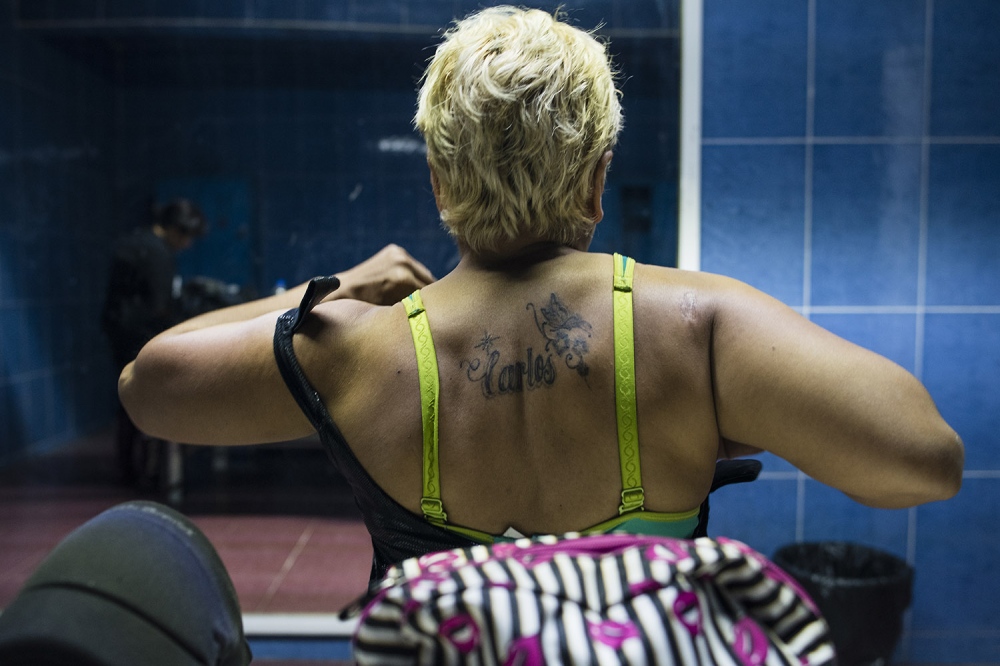 9 of 17 © 2022 Diana Bagnoli
Mitzy is preparing to fight with Andromeda.
Fighting is her big chance to travel and know the world.
A lot of women had to retire due to their husbands but she's very obstinate and now, after
several years Carlos, her husband, accepted her job and passion, even if he's still worry
about her when she's having a match. 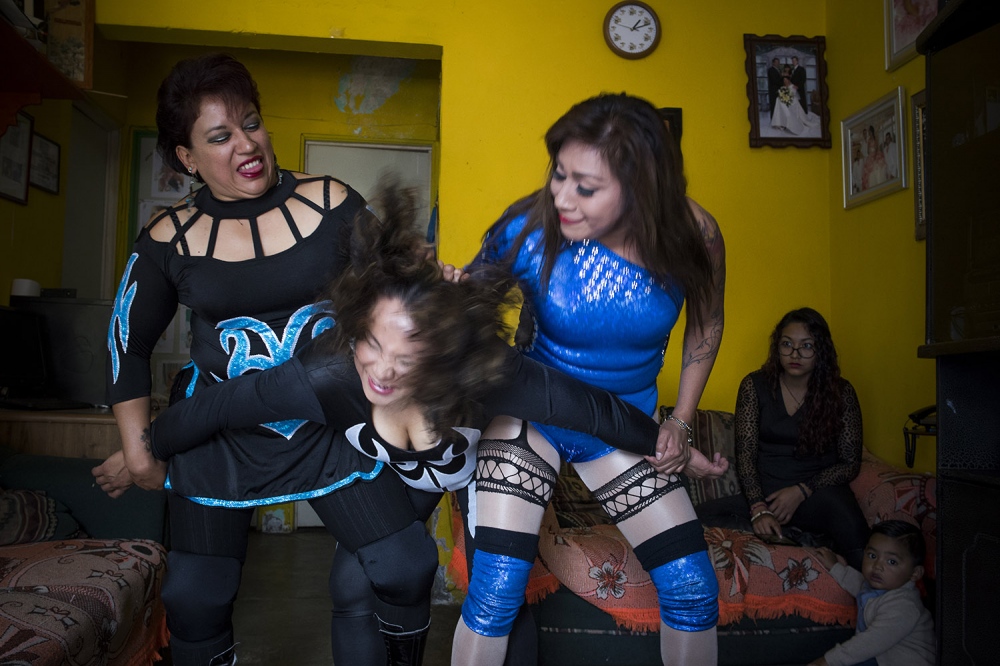 10 of 17 © 2022 Diana Bagnoli
Juliza meeting with her collegues at her house, to train, orginize the next fights and share new tricks. Her doughter is at home with her son, so Juliza, a part to be a wrestler woman is also a grandmother, and a pharmacist. 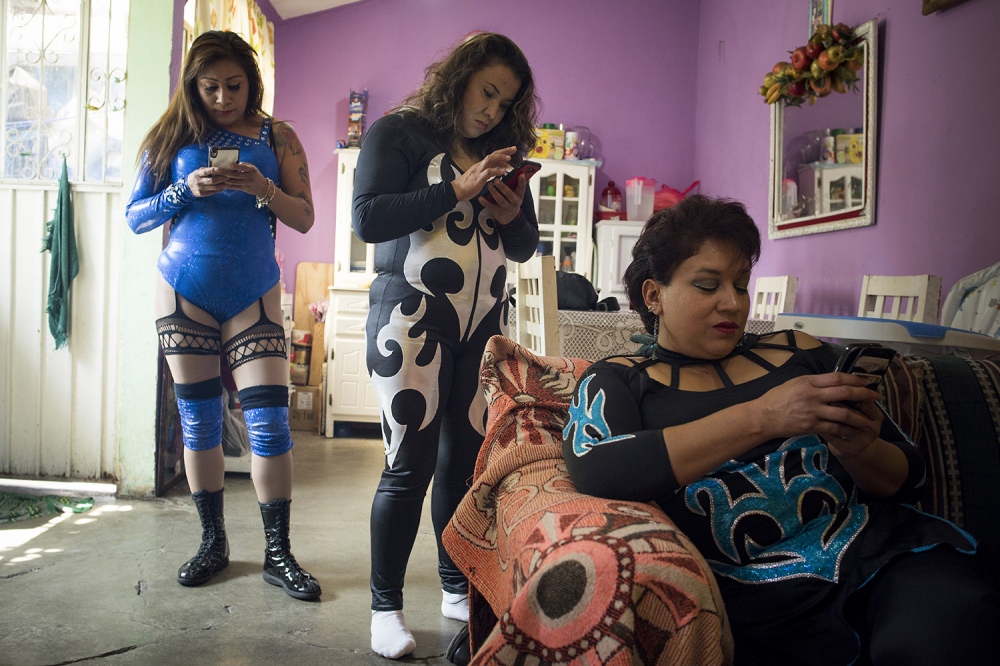 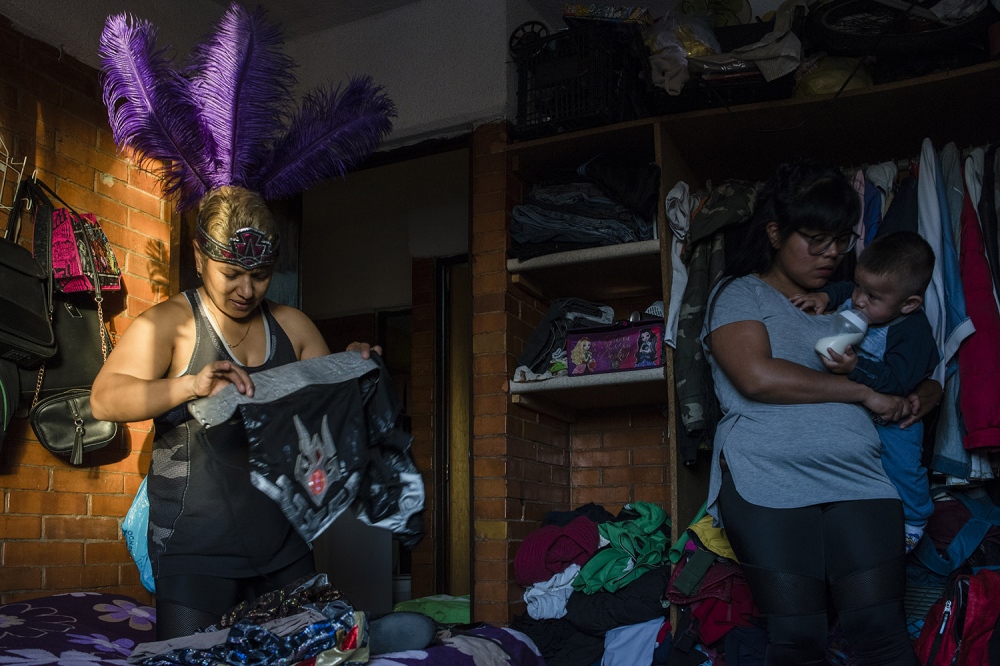 12 of 17 © 2022 Diana Bagnoli
Lilianaâ€™s name in the normal
life, Mitzy as a wrestler, is
dressing up.
She is 38 years old.
Her grandson is looking at her
curiously, from his motherâ€™s
arms. 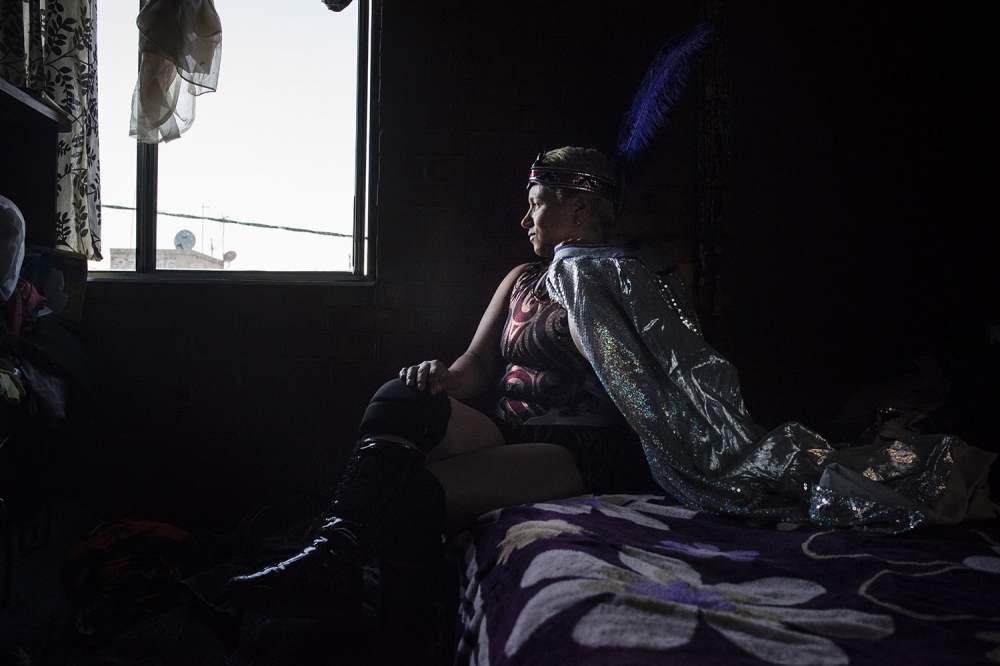 13 of 17 © 2022 Diana Bagnoli
Mitzy' posing with her wrestling costume in her room.
Mitzy is her wrestler name, it means "queen of narrows".
She is 38 year old, she lives with her 4 children, her husband, a grandson and her
doughter in law.
She's trains every day, she knows very well different kinds of fight but she loves wrestling
because it gives you the chance to play a role, be somebody else for few minutes and this,
to her, "it's such an adrenaline, it makes you addictedâ€. 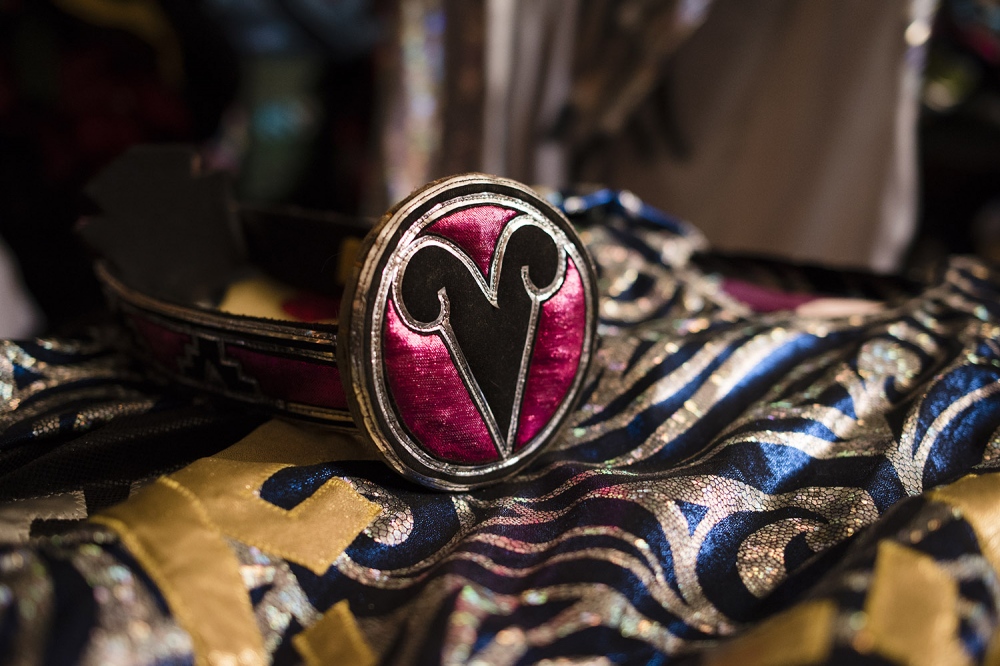 14 of 17 © 2022 Diana Bagnoli
Part of Mitzy wrestling
ornamental crown in her
room. Her son and her
husband are in the
background.
The whole family lives
together in a small apartment:
she, her husband, children
and grandchildren. Theyâ€™re 9
people in the same house. 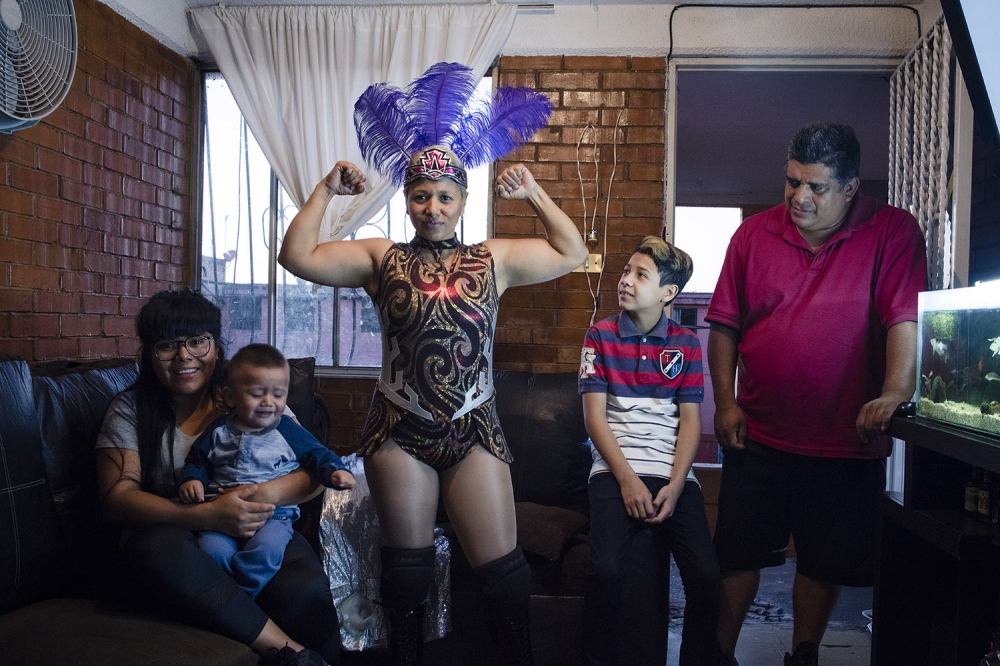 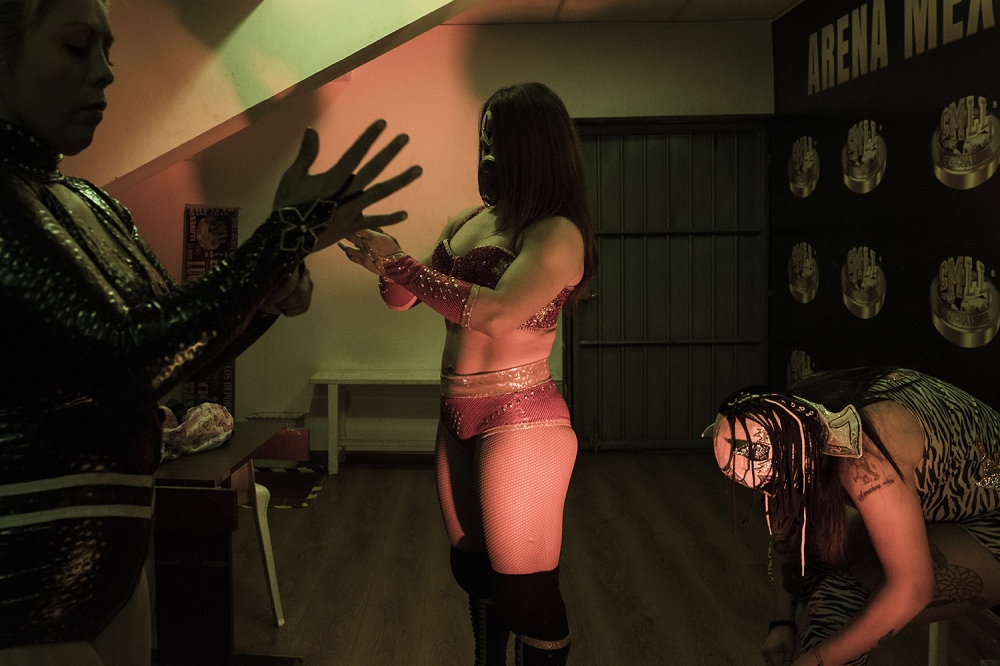 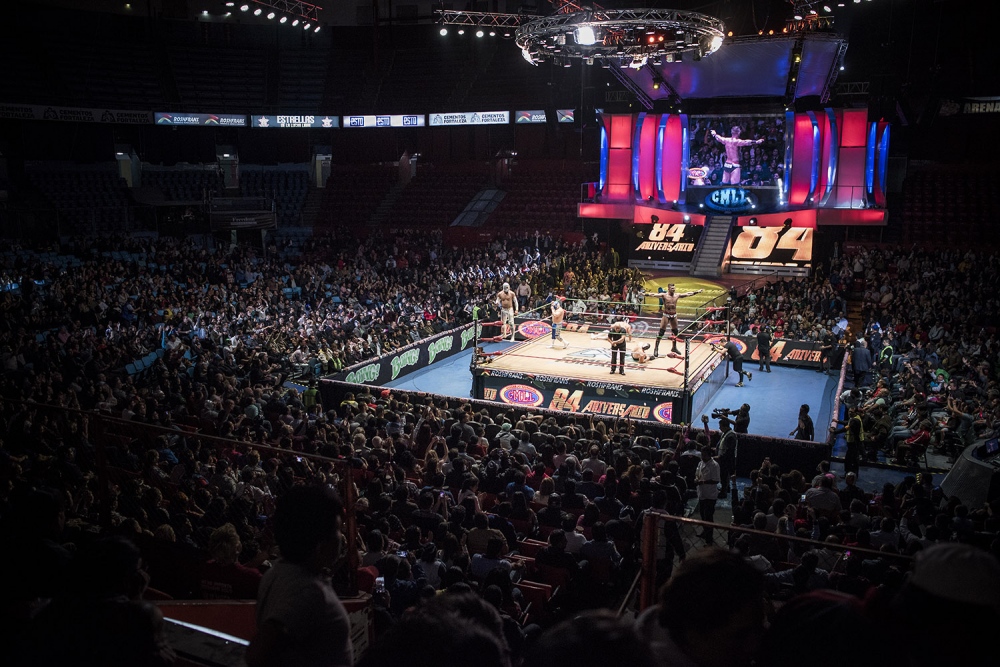 17 of 17 © 2022 Diana Bagnoli
Arena MÃ©xico is an indoor arena in Mexico City, primarily used for professional wrestling, or lucha libre. Its shows are promoted by Consejo Mundial de Lucha Libre (CMLL). The building is called the "cathedral of lucha libre". Arena MÃ©xico has a seating capacity of 16,500 when configured for professional wrestling or boxing events. Twice a week it's always jammed with people assisting to the wrestling show .
Public Story
The Luchadoras
Copyright diana bagnoli 2022
Date of Work Oct 2017 - Dec 2017
Updated Apr 2018
Location ciudad de mexico
Archived as luchadoras, lucha libre, lucha, wrestling, wrestler, women, woman, fight, fighter, machism, ciudad de mexico, mexico, arena, ring, poverty, chance, change, color, mask
Lucha libre, literally "Free fight", is a term used in Mexico for a form of professional
wrestling developed in the country.
It is a unique pop-culture phenomenon whose origins date back to 1863 when a Mexican
wrestler first developed the art of "˜free-style' fighting based on Greco-Roman traditions and
after a few decades its popularity started to grow when two Italian businessmen began
promoting no-holds barred fights.
Women have been wrestling since the beginning, but female wrestling was forbidden in
the capital city"it was considered immoral. So women had to tour around the country to
wrestle. From the 90s to the 2000s, it became more popular to see a woman fight and
nowadays there are several girls trying to make a career in the ring.
Sadly they have to accept that no matter how hard they try, they're rarely going to be the
headliner at the show. They're mostly on the independent circuit because it's hard to join
the bigger companies in Mexico.
A lot of women had to retire due to their husbands obligation but others could get out from
abusive marriages thanks to this kind of fight. Some of them started just to learn how to
defend themselves and ended up travelling the world in a very unexpected way.
But fighting is not just their big chance to travel, know the world and achieve a better life.
they are also fighting for more rights, both in Mexican society and inside the ring.
In fact the macho culture is all pervasive in Mexico and this emphasis on male pride is a
contributing factor in the high rates of violence against women that Mexico is experiencing.

By diana bagnoli — The Curandero is a traditional Native healer that in Mexico is still the primary healthcare providers in..
Mar 6, 2018

By diana bagnoli / milan — Maternity and giving birth at the time of the Corona Virus-19 In the Covid hospitals, maternal child wards..
Apr 27, 2020

By diana bagnoli — TEHUACAN, THE CITY OF THE BLUE TOXIC WATER Factories in Tehuacán, Mexico, produce distressed denim for..
Mar 29, 2018

By diana bagnoli / senegal miomp casamance — THE BUKUT, Casamance, August 2016. Summer time in a small village of Casamance, the southern and more..
Dec 22, 2016

By diana bagnoli / cusco — PERUVIAN CURANDEROS OF THE ANDES Pre Columbian traditional medicine has, for centuries, relied on the..
Dec 17, 2016

By diana bagnoli — MAYANTUYACU In the heart of the Amazon rainforest, on the banks of boiling springs and in the shade of..
Mar 2, 2016

By diana bagnoli — THOSE WHO REMAIN, MOTHERS OF THIAROYE SUR MER "To leave is a matter of survival. Here there is no money, no..
Sep 14, 2016

By diana bagnoli — PERUVIAN CURANDEROS, FROM THE ANDES TO THE AMAZON Pre Columbian traditional medicine has, for centuries,..
Mar 10, 2016