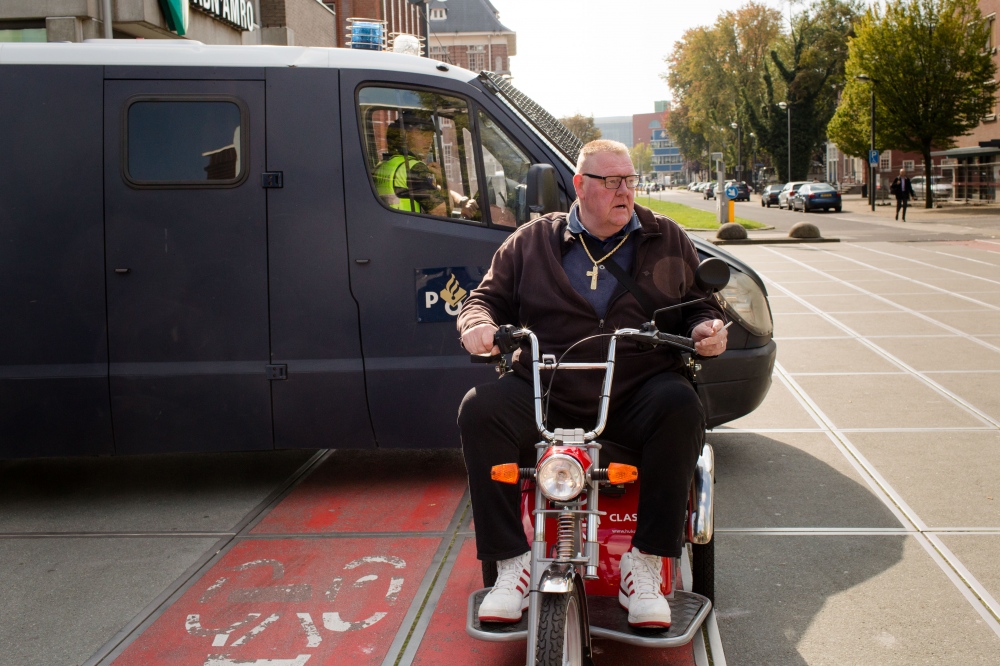 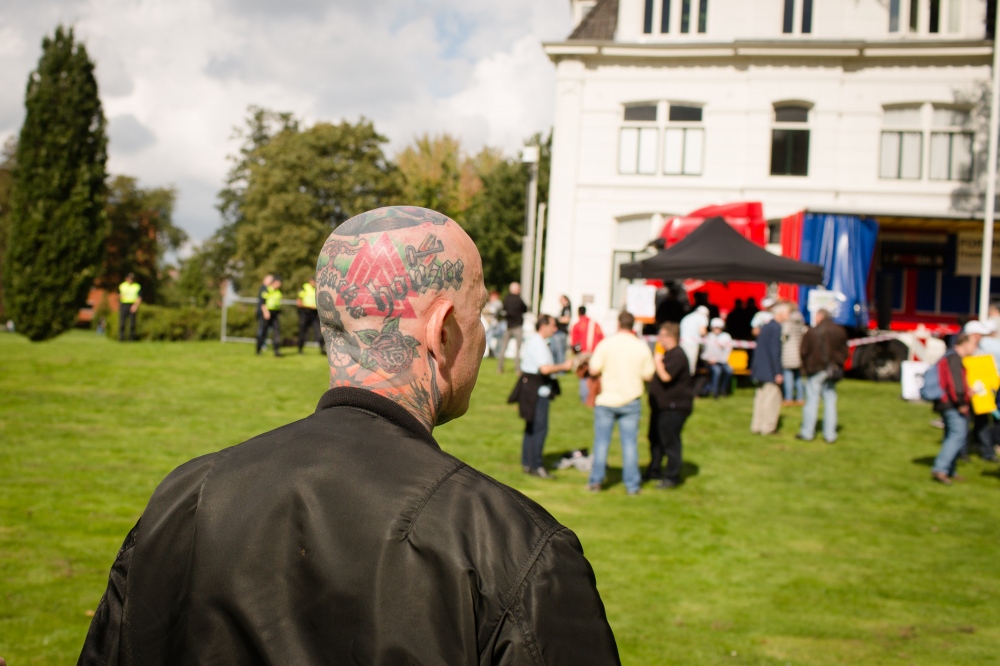 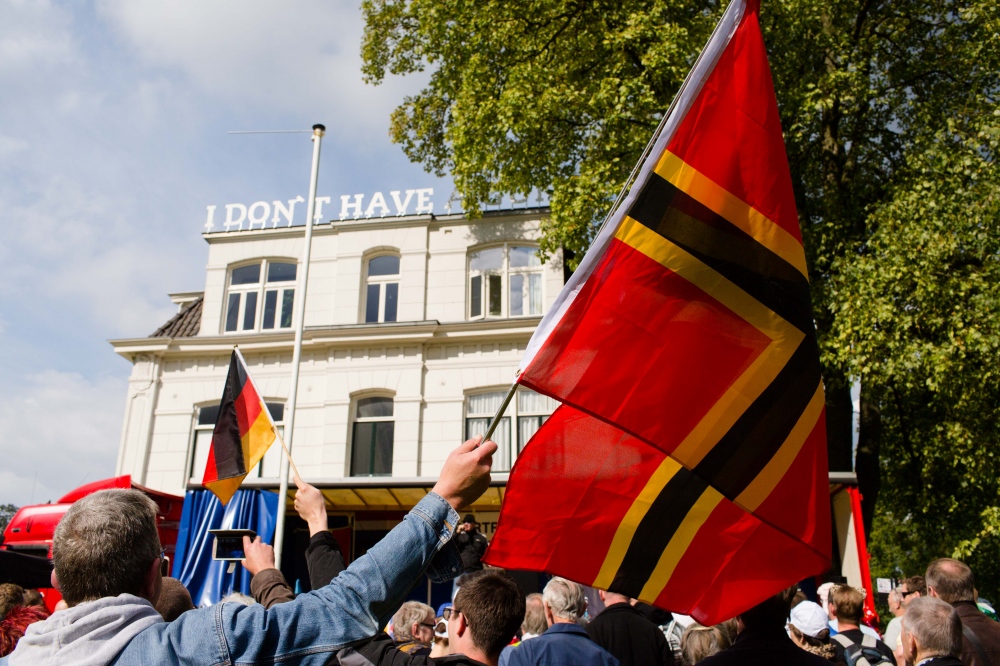 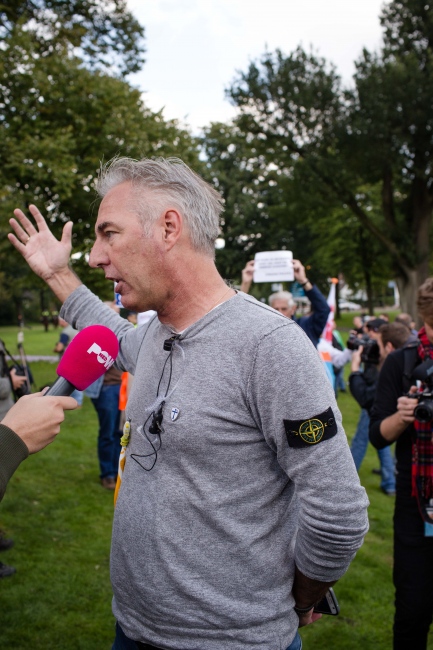 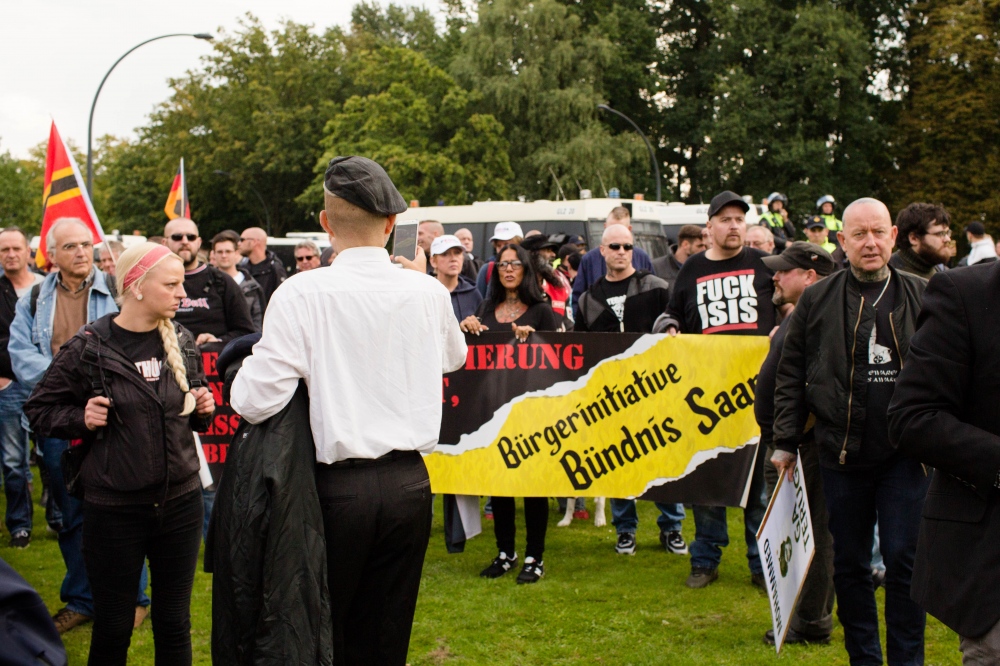 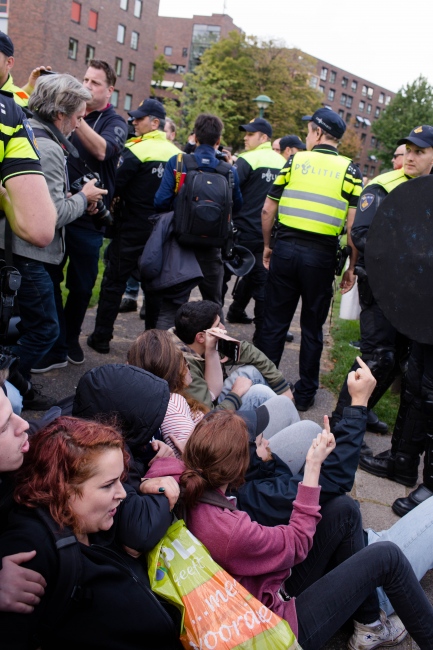 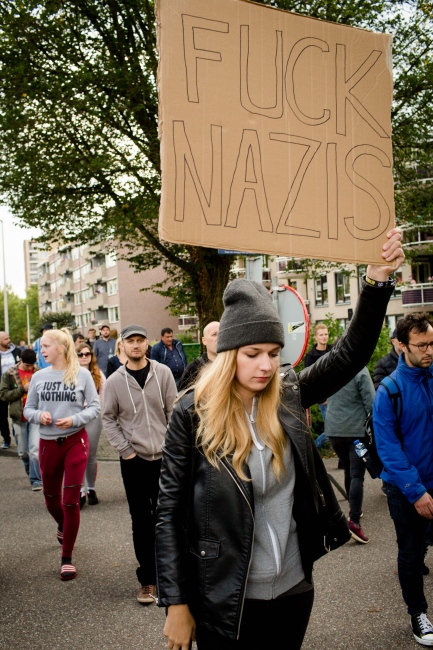 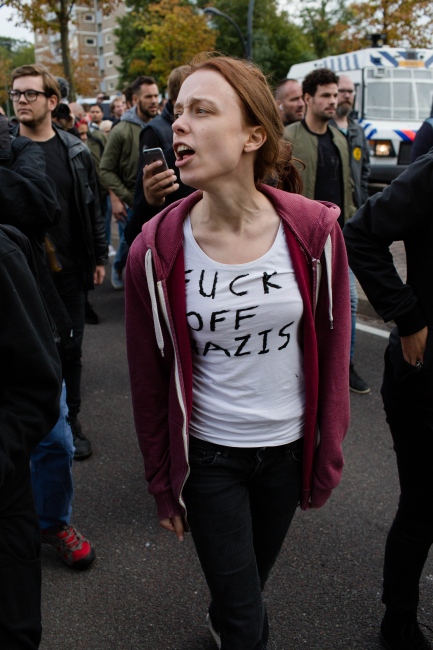 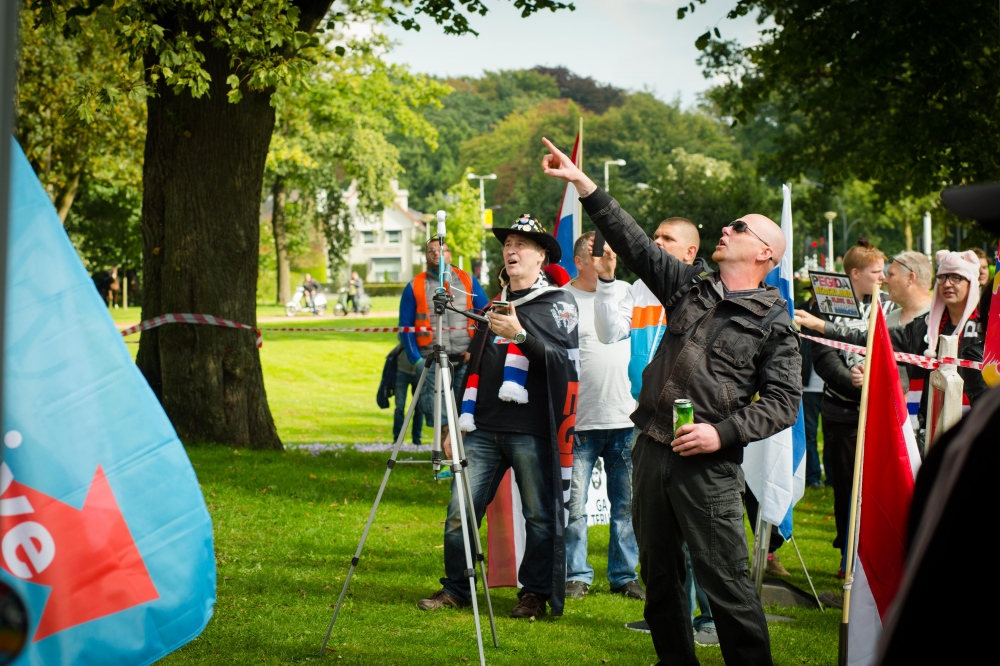 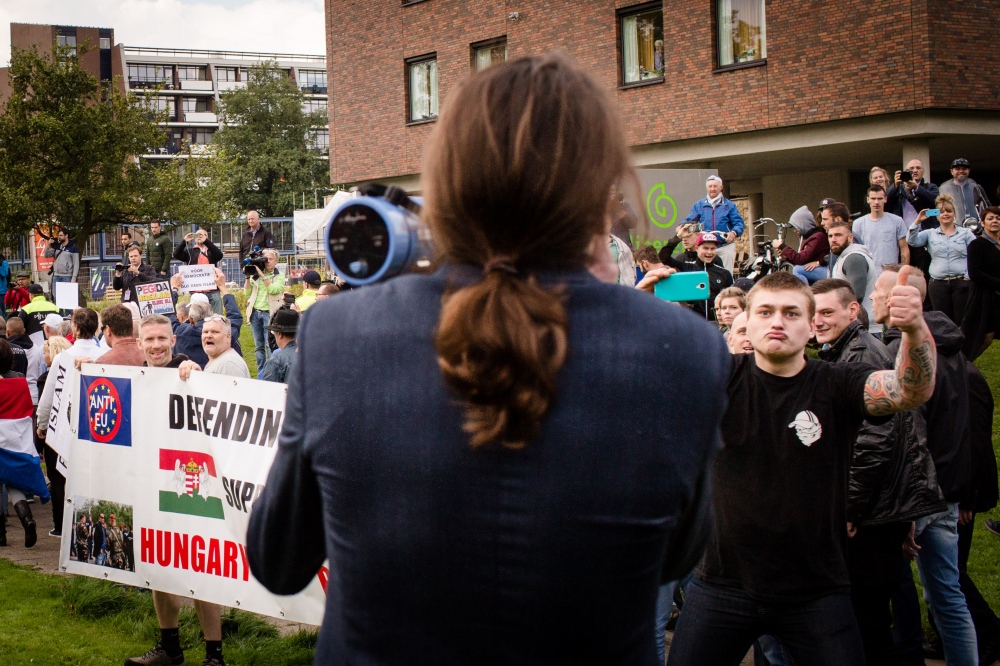 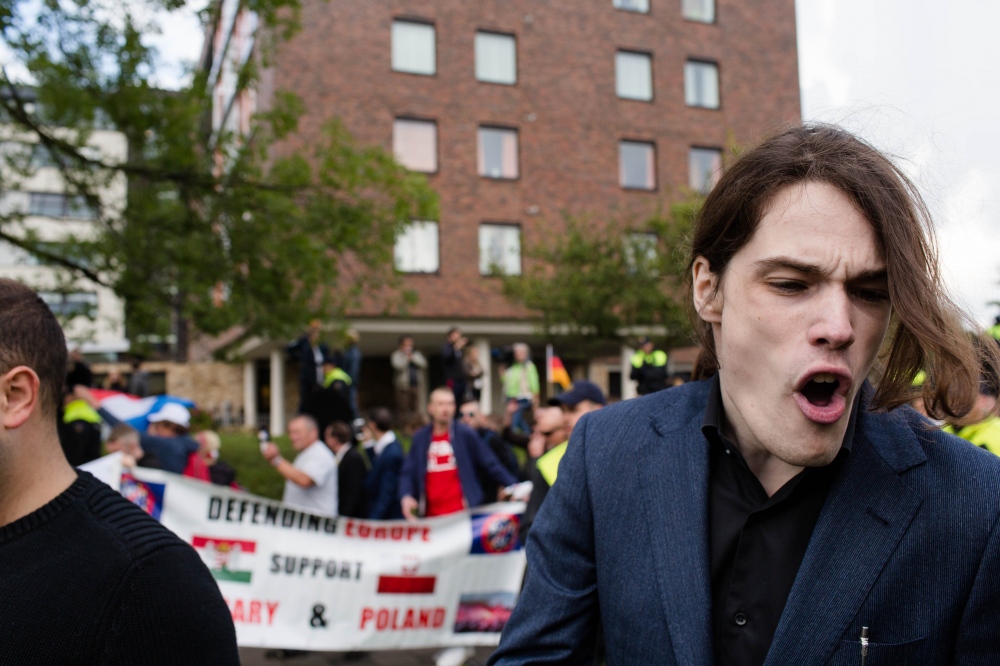 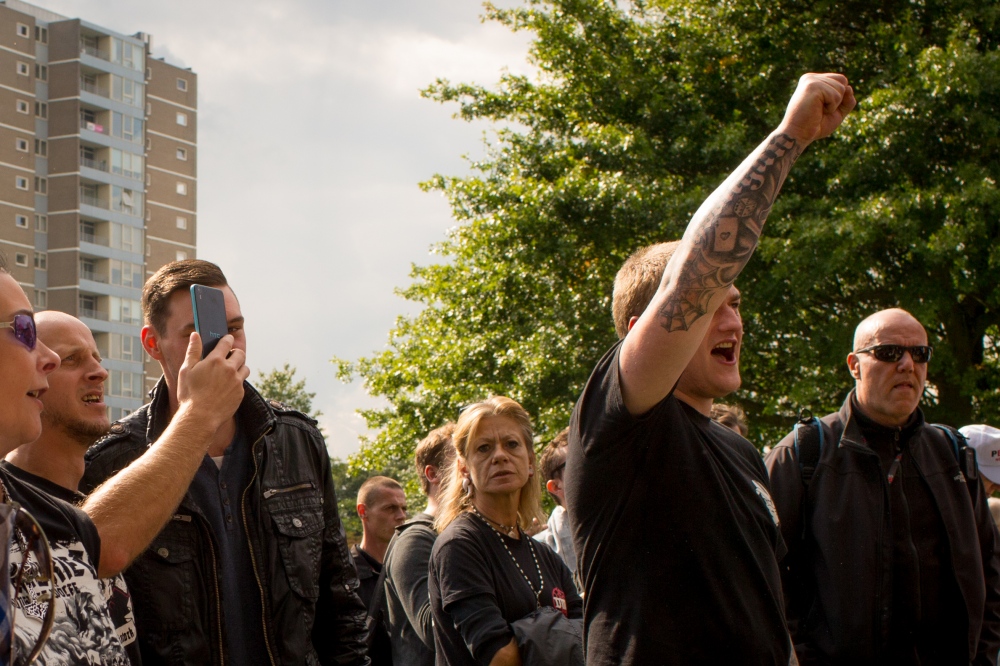 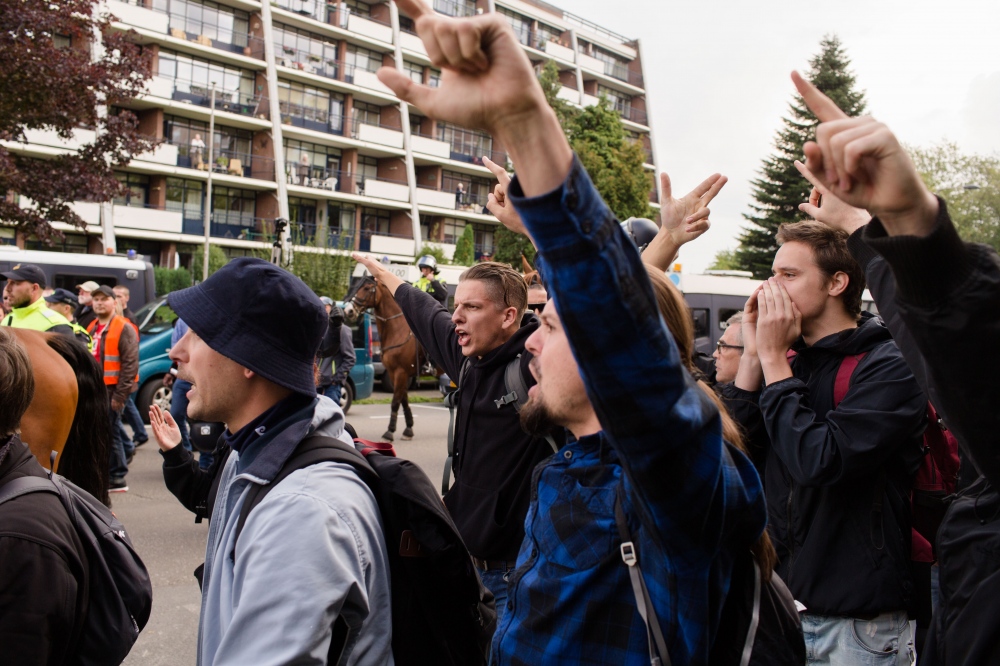 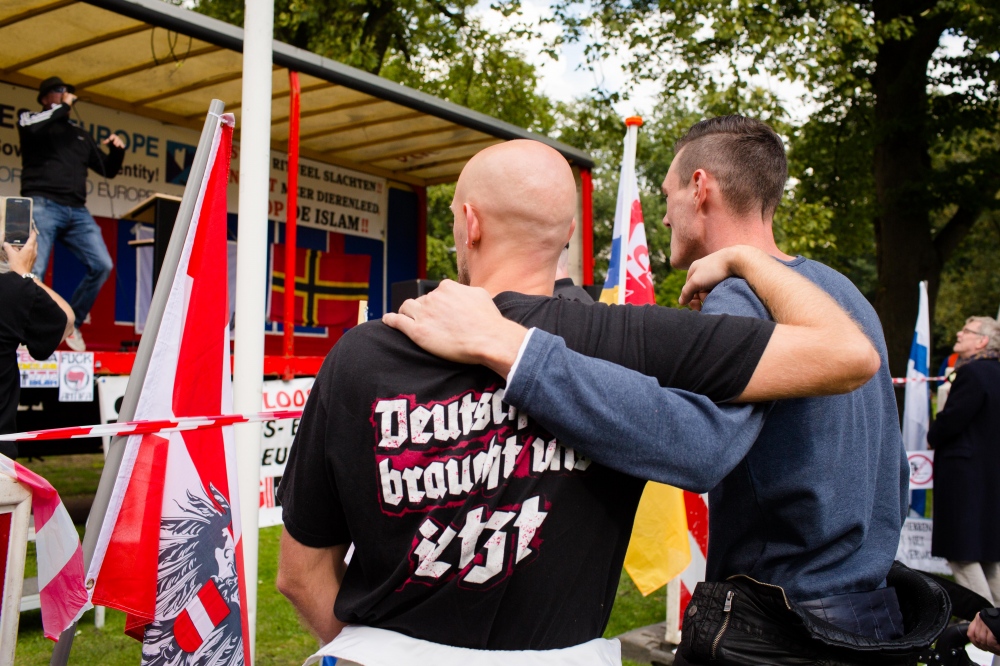 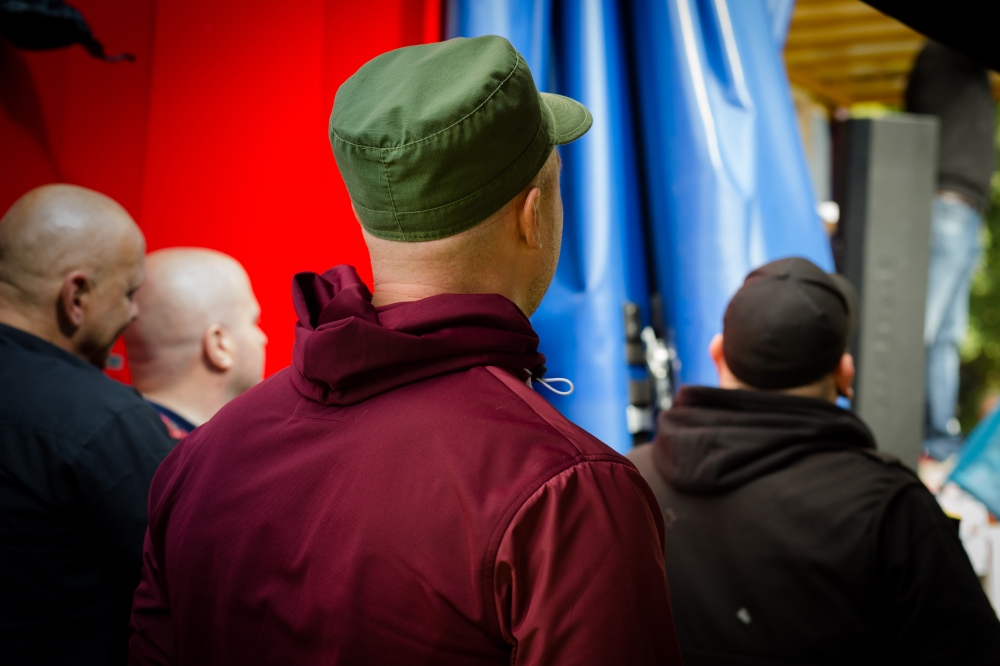 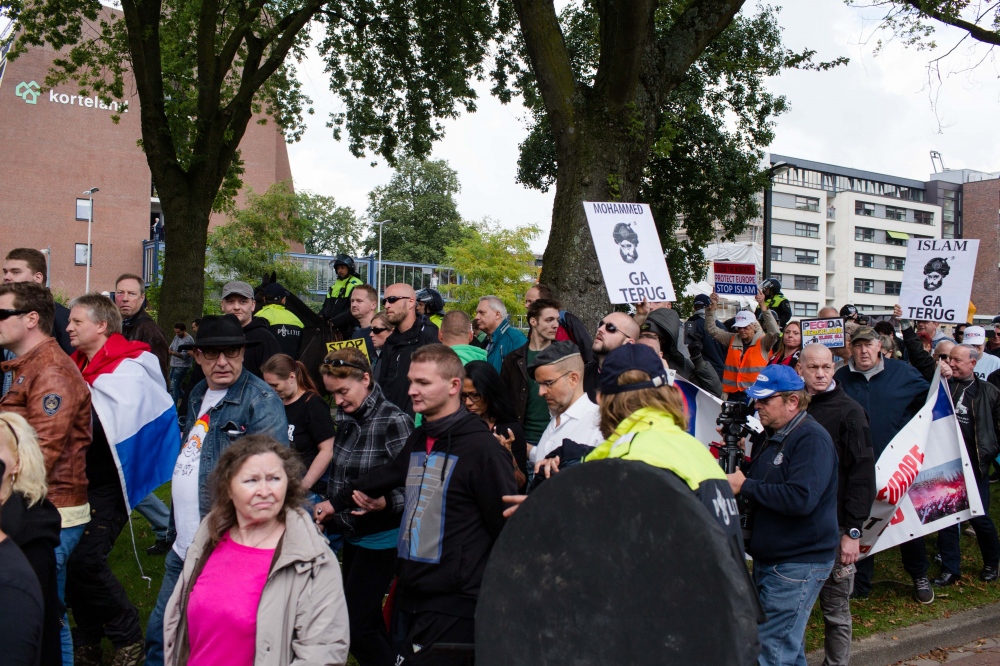 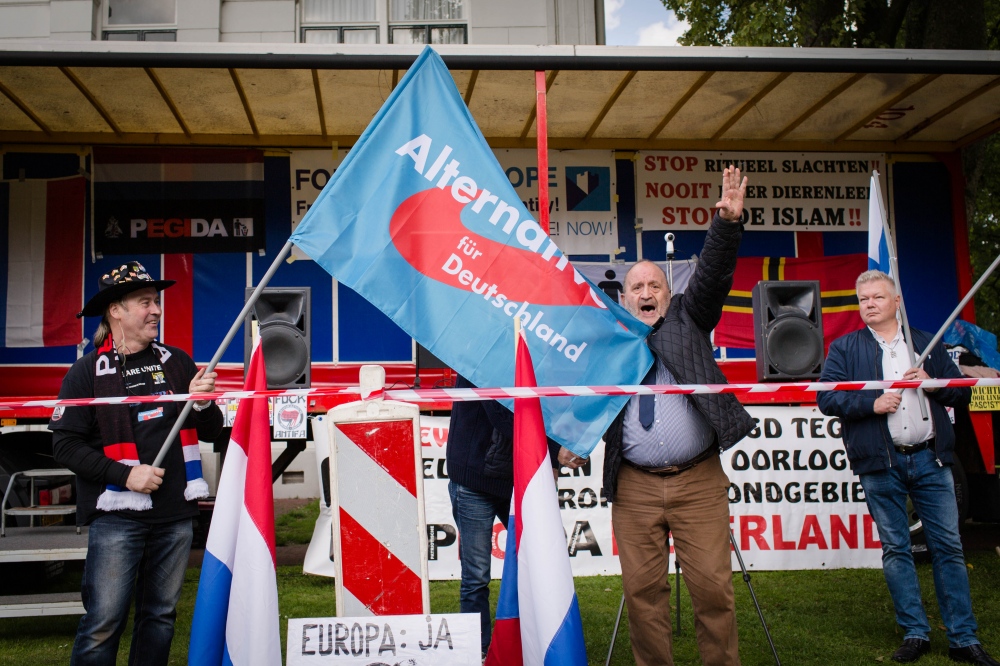 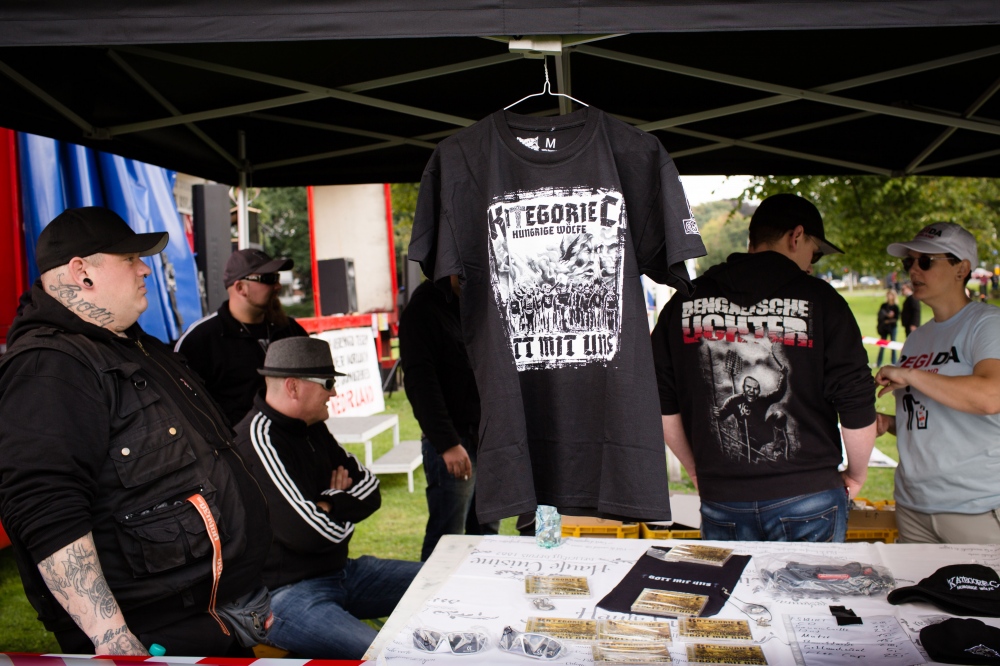 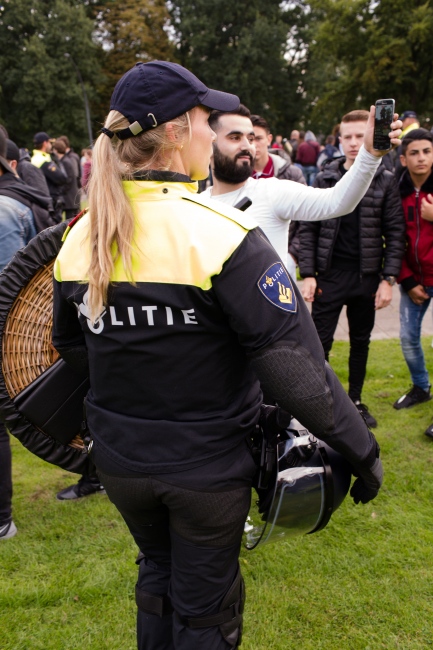 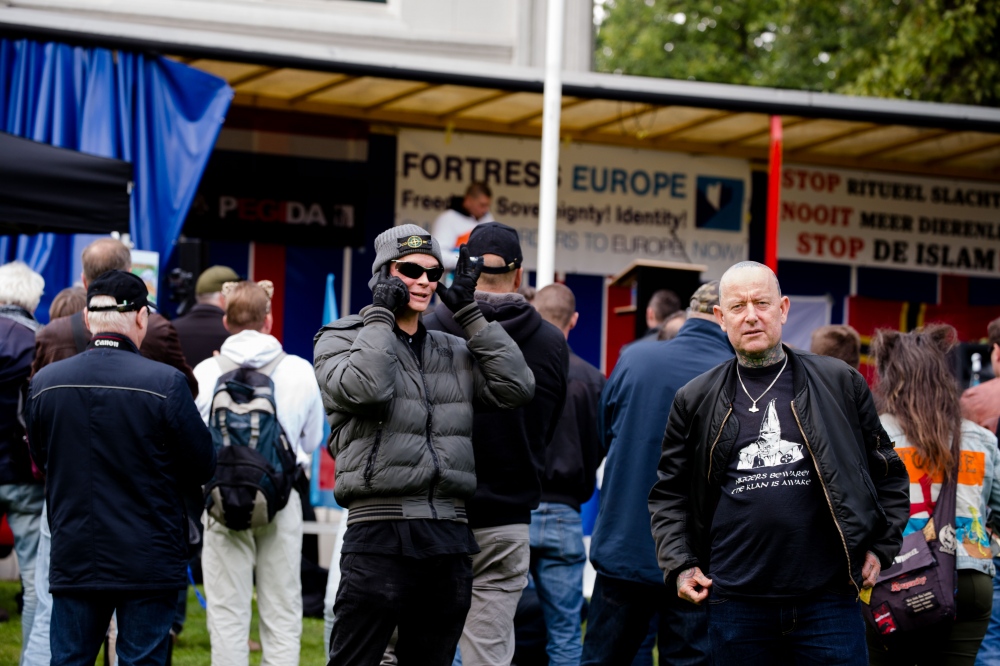 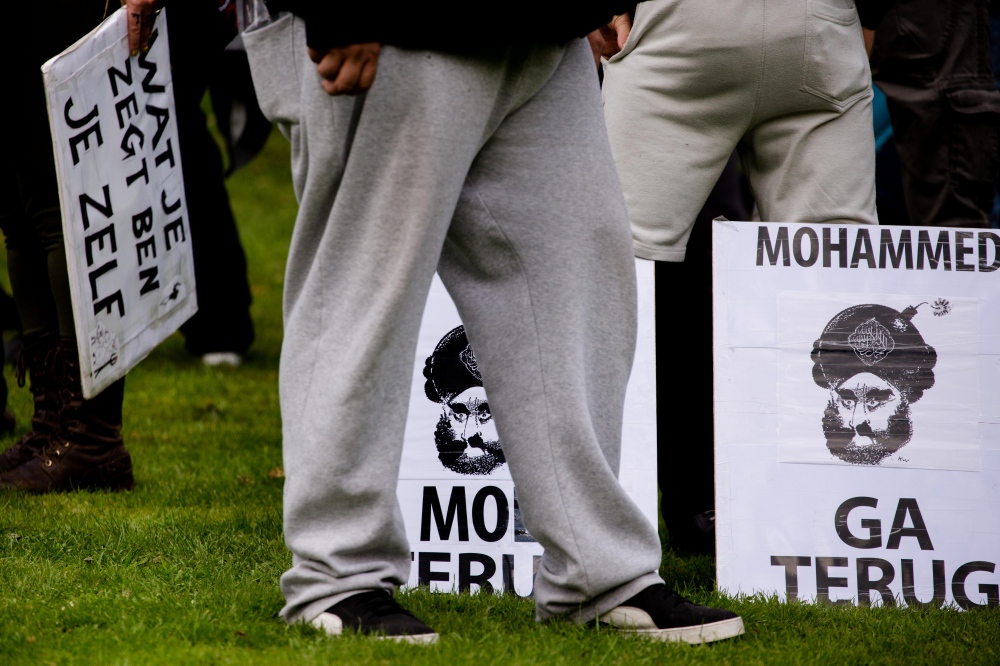 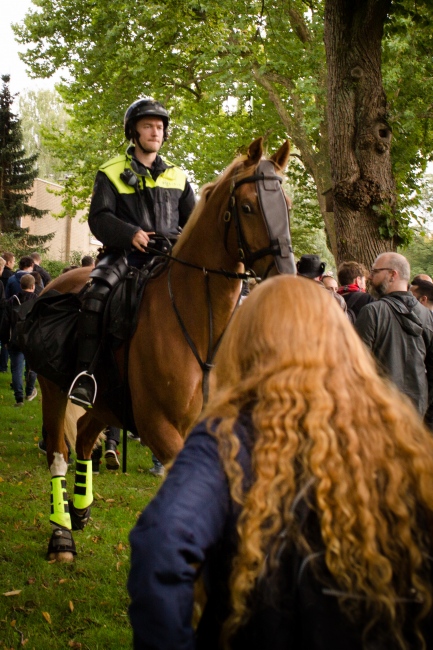 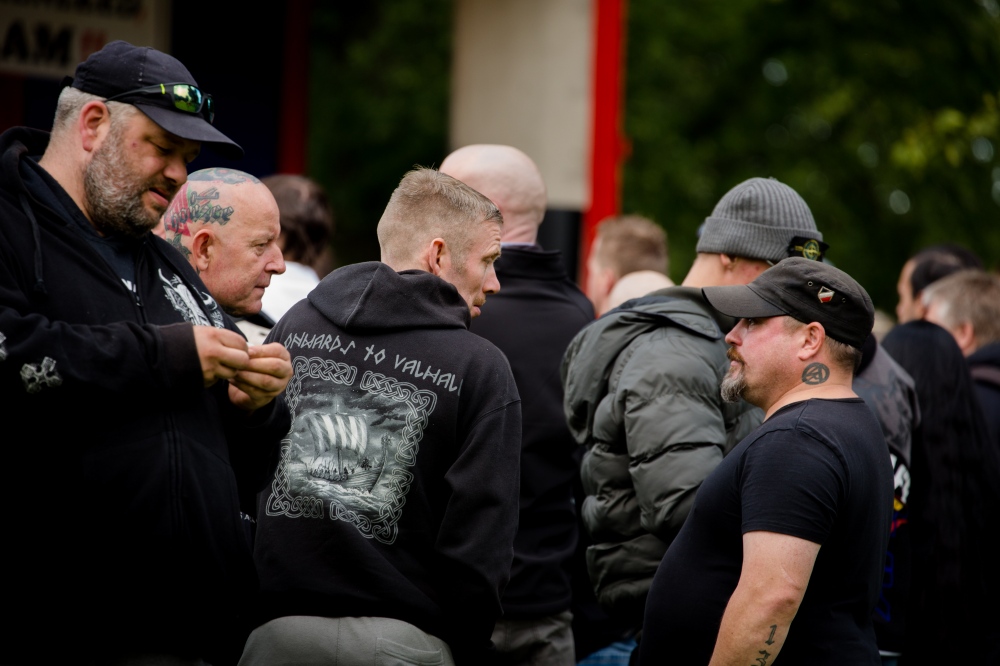 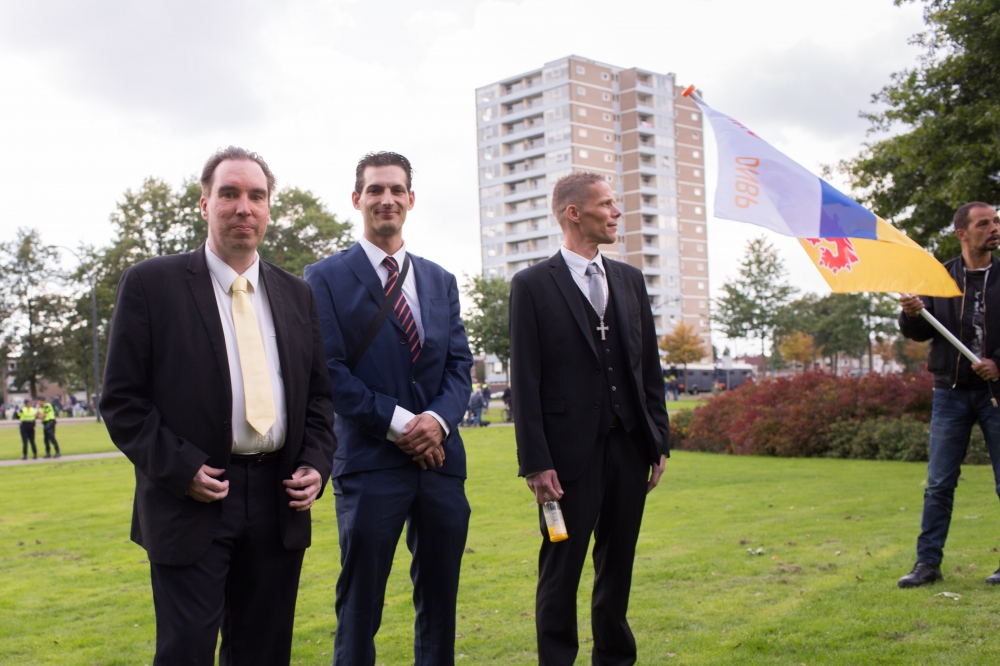 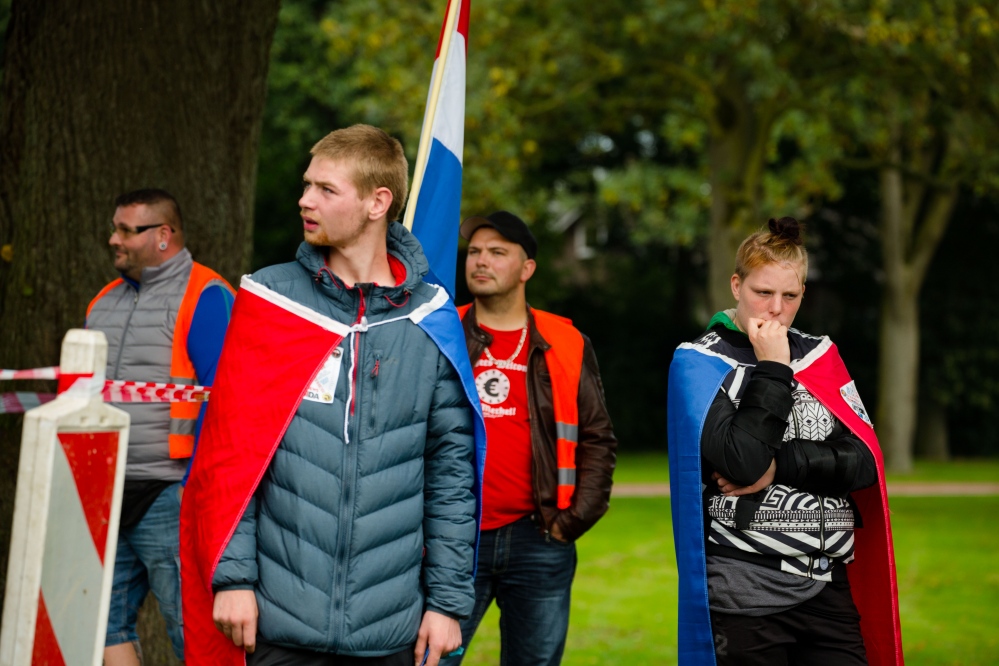 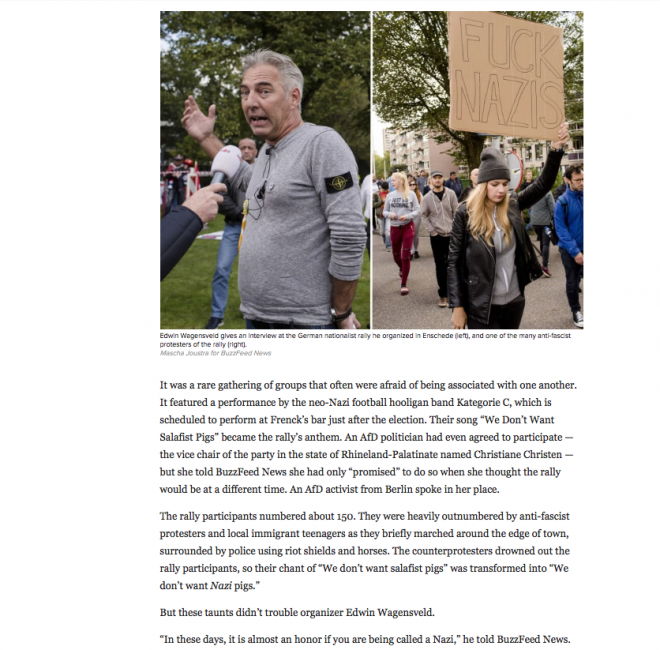 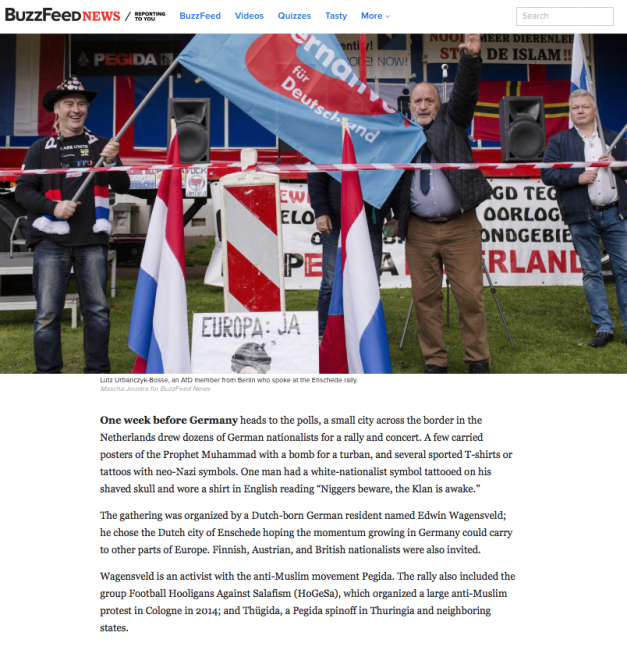 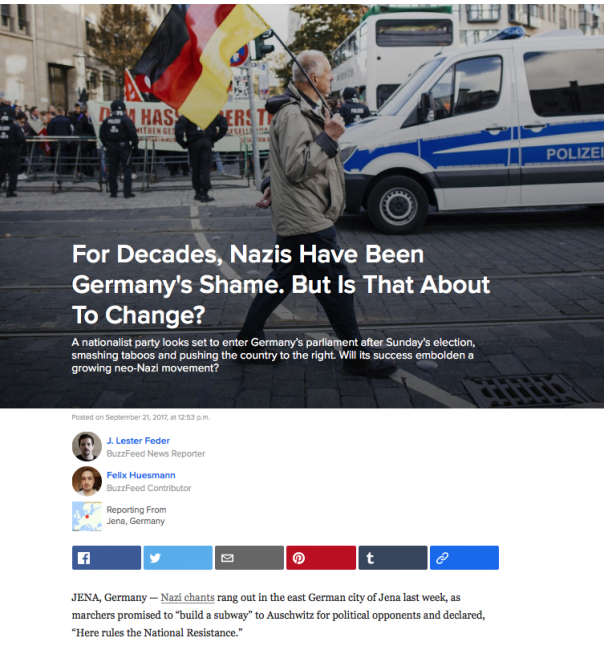 For Decades, Nazis Have Been Germany's Shame. But Is That About To Change?

text by Lester Feder - Buzzfeed Intl News Reporter ;          --One week before Germany heads to the polls, a small city across the border in the Netherlands drew dozens of German nationalists for a rally and concert. A few carried posters of the Prophet Muhammad with a bomb for a turban, and several sported T-shirts or tattoos with neo-Nazi symbols. One man had a white-nationalist symbol tattooed on his shaved skull and wore a shirt in English reading "Niggers beware, the Klan is awake."

The gathering was organized by a Dutch-born German resident named Edwin Wagensveld; he chose the Dutch city of Enschede hoping the momentum growing in Germany could carry to other parts of Europe. Finnish, Austrian, and British nationalists were also invited.

Wagensveld is an activist with the anti-Muslim movement Pegida. The rally also included the group Football Hooligans Against Salafism (HoGeSa), which organized a large anti-Muslim protest in Cologne in 2014; and ThÃ¼gida, a Pegida spinoff in Thuringia and neighboring states.

It was a rare gathering of groups that often were afraid of being associated with one another. It featured a performance by the neo-Nazi football hooligan band Kategorie C, which is scheduled to perform at Frenck's bar just after the election. Their song "We Don't Want Salafist Pigs" became the rally's anthem. An AfD politician had even agreed to participate " the vice chair of the party in the state of Rhineland-Palatinate named Christiane Christen " but she told BuzzFeed News she had only "promised" to do so when she thought the rally would be at a different time. An AfD activist from Berlin spoke in her place.

The rally participants numbered about 150. They were heavily outnumbered by anti-fascist protesters and local immigrant teenagers as they briefly marched around the edge of town, surrounded by police using riot shields and horses. The counterprotesters drowned out the rally participants, so their chant of "We don't want salafist pigs" was transformed into "We don't want Nazi pigs."

"In these days, it is almost an honor if you are being called a Nazi," he told BuzzFeed News. "It shows that you have your heart in the right spot for your fatherland."

By Mascha Joustra — I followed along with a small family circus during some of their shows in the Netherlands. I felt very..
Nov 20, 2019

By Mascha Joustra / Bamenda — Night falls on Nkwen Street in Bamenda, Cameroon, Africa. This is the most busy road in this town and well..
Mar 8, 2016

By Mascha Joustra / netherlands — When photographing this small town  soccer club called 'Kwik' it reminded me so much..
Dec 11, 2018

By Mascha Joustra / Netherlands — ‘Black Pete’.  A Dutch tale. In this series I followed a group of teenagers preparing..
Dec 20, 2017

By Mascha Joustra / belfast — I visited Belfast and even though I thought I knew about the history of the city, I was very much puzzled...
Jun 10, 2016

By Mascha Joustra / amsterdam — As a former inhabitant of Amsterdam, I never was interested in walking through the city’s red light..
Jun 14, 2016

By Mascha Joustra / netherlands — This series is about Frigga, a pagan lady,  who lives close to me and presents herself as a..
Jun 1, 2016

carnaval. the ones we do not see

By Mascha Joustra / shertogenbosch — This is my hometown in the south of Holland. These are the people I loved meeting. Each year, for months..
Feb 11, 2017

By Mascha Joustra / netherlands — In may 2014 I photographed a short series of this dutch small shooting society called 'Diana' where you can..
Jun 8, 2016

By Mascha Joustra / antwerp, belgium — This (ongoing) project is about the augmented threat of terrorism in the jewish quarters of in the city..
Feb 10, 2015