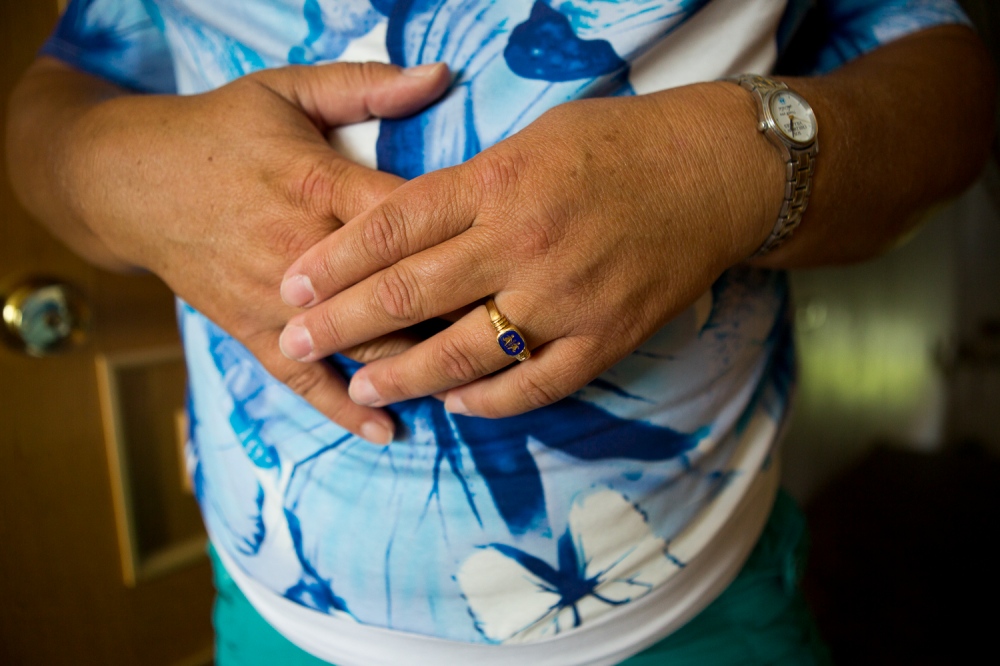 Antonina Patoka, age 49, wears the ring gifted to her by the organization for her ten year mark on the job. Patoka offically became a certified S.O.S. mother at the age of 36 and has been mothering for 13 years. 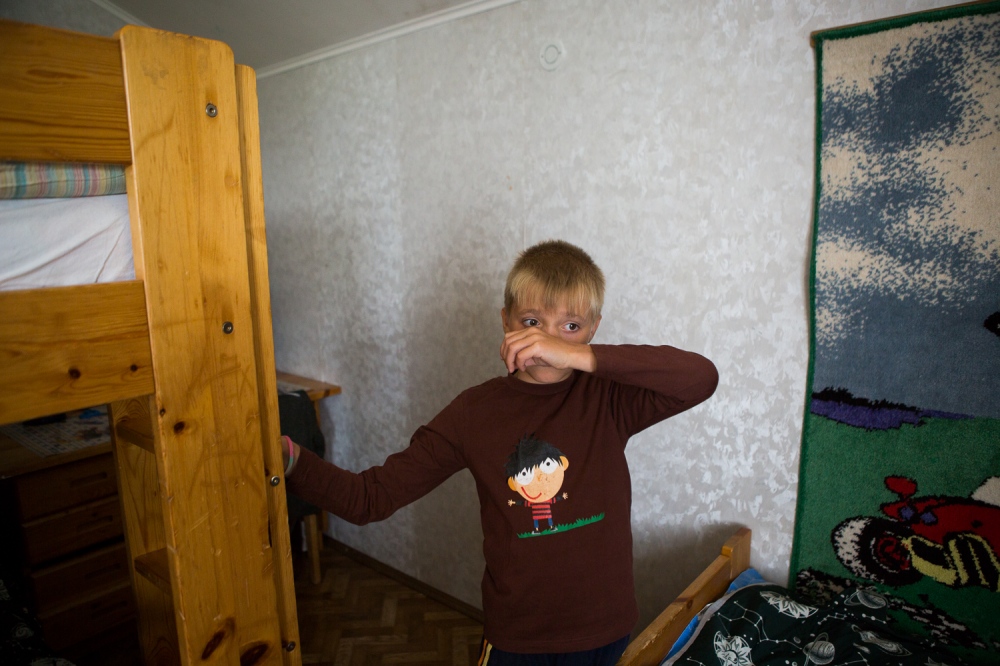 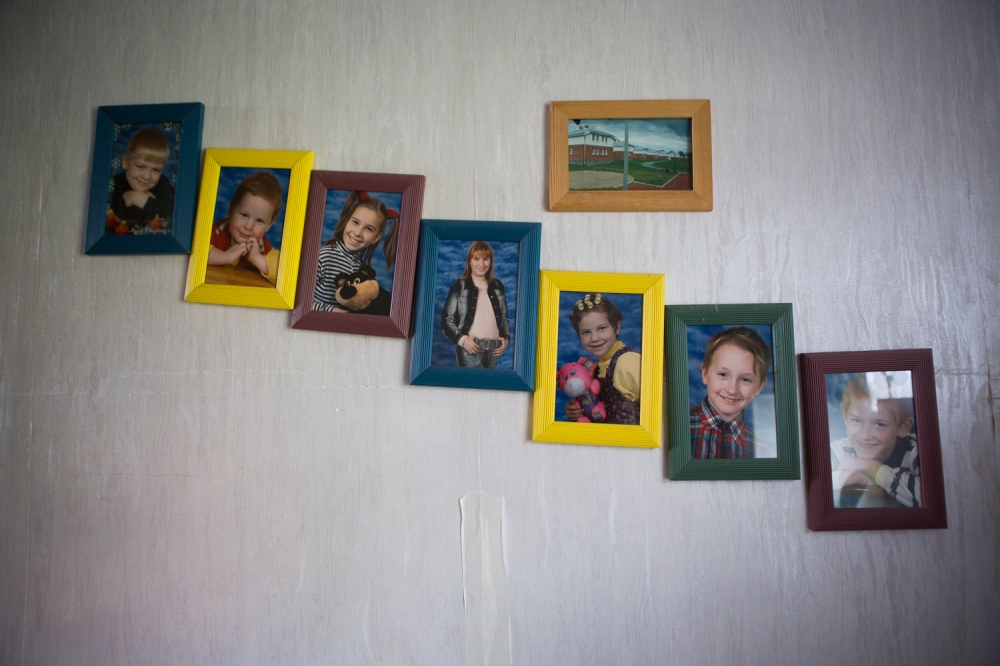 Mama Antonina has photographs of her children who have aged out of the village framed on a wall in her home. Patoka proudly maintains strong relationships with her grown children whom still consider her mama. Typically children leave the village and move into transitional housing in the city at age 18. However, S.O.S. maintains that they cater to each child's personal needs so that if a child wanted to, he or she could remain in the village up to age 23. 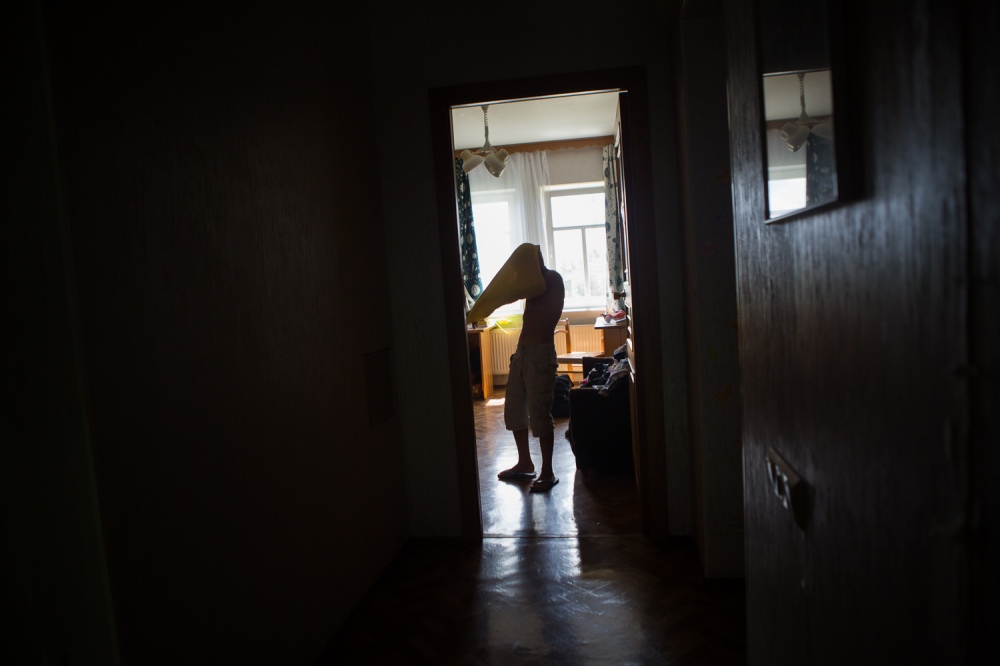 Denis, 12, changes into play clothes in the bedroom he shares with his brothers Roman and Roman. 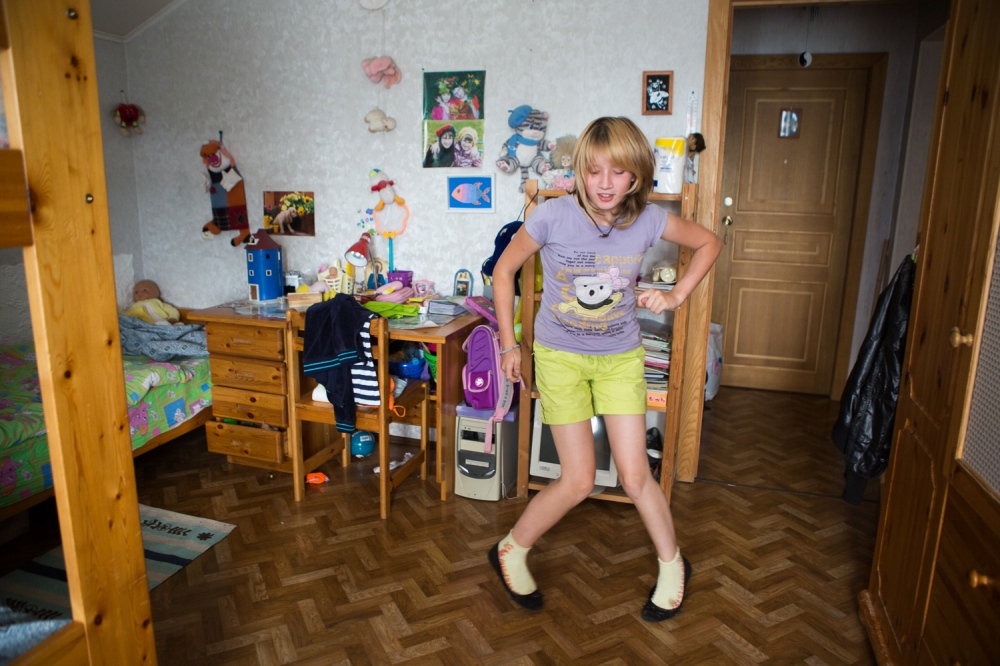 Antonina, age 12, dances in her bedroom. Dancing is one of her favorite hobbies that she picked up from summer camp. 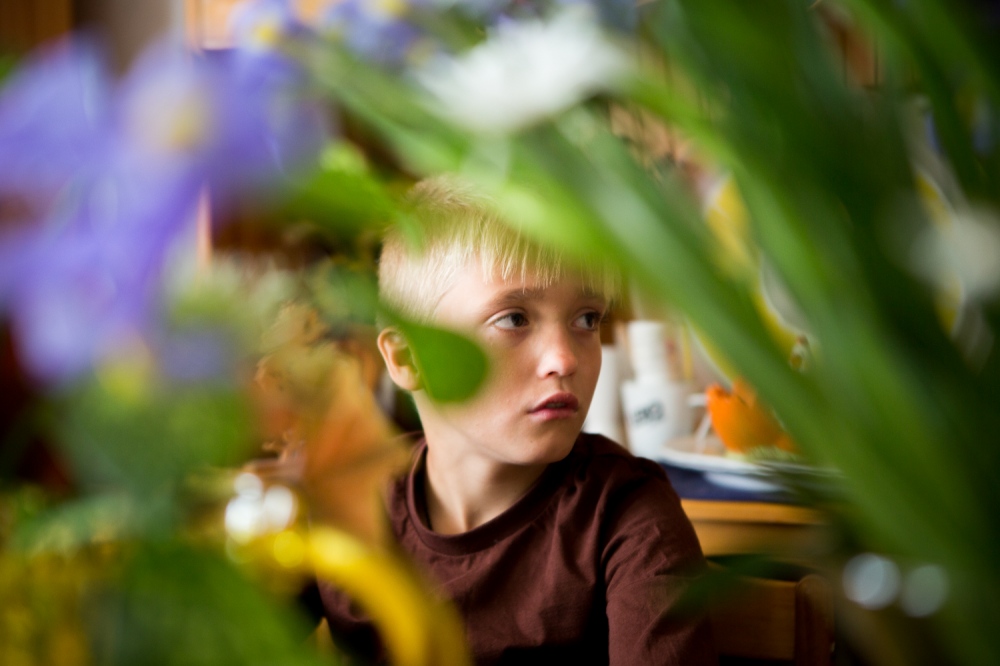 Roman, age 10, sits at the Patoka family kitchen table. Roman moved to the village with his older brother Denis, 12, when he was 7 years-old. 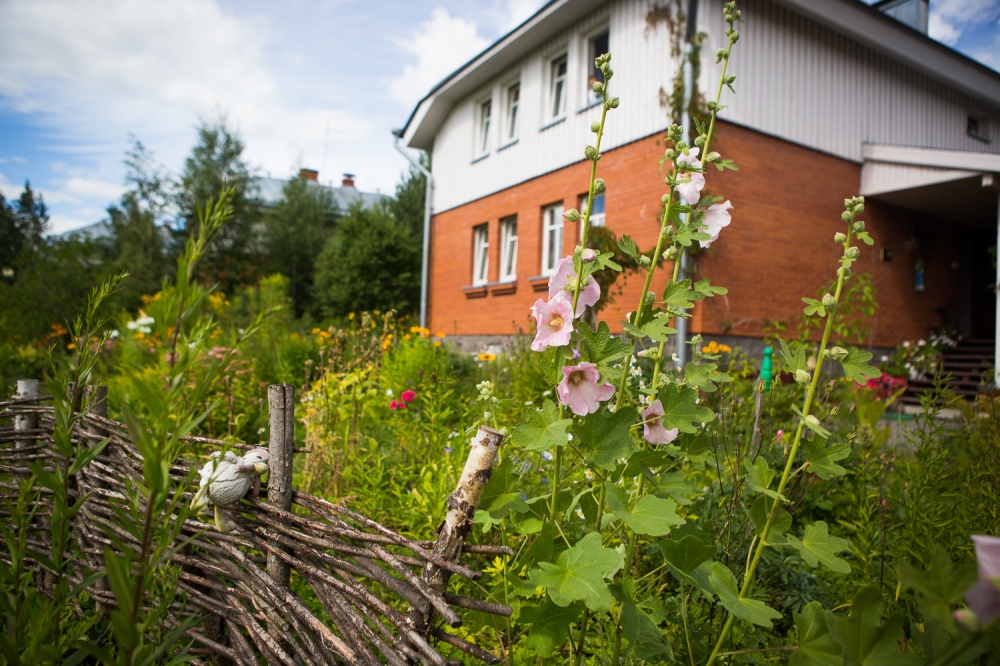 The outside of the Patoka cottage. The same home model is used for all twelve cottages at the S.O.S. Pushkin Children's Village. 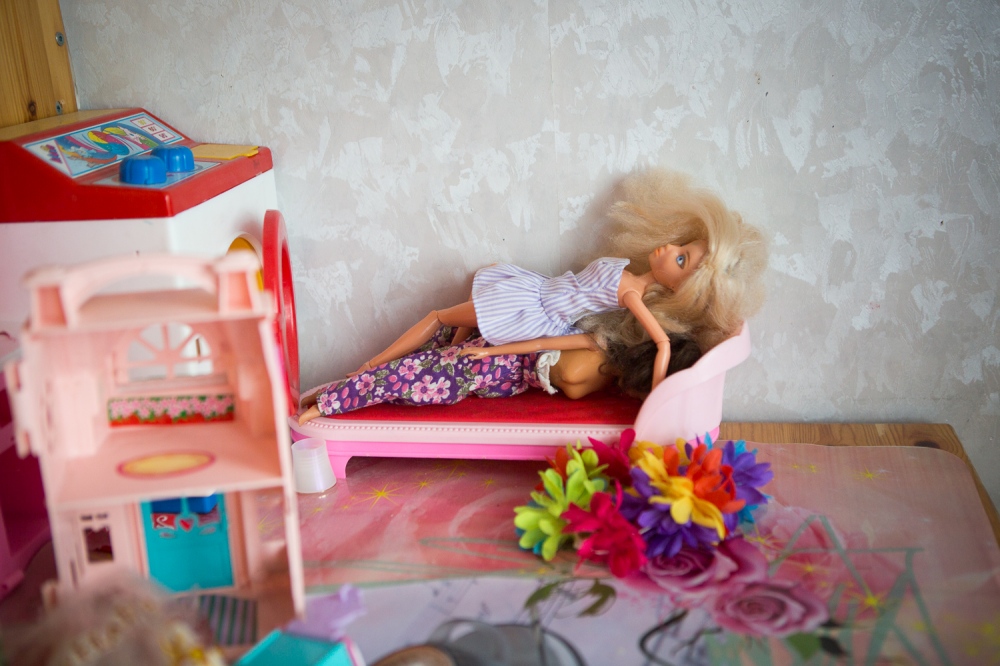 Barbie dolls wait to be played with inside the girls bedroom. 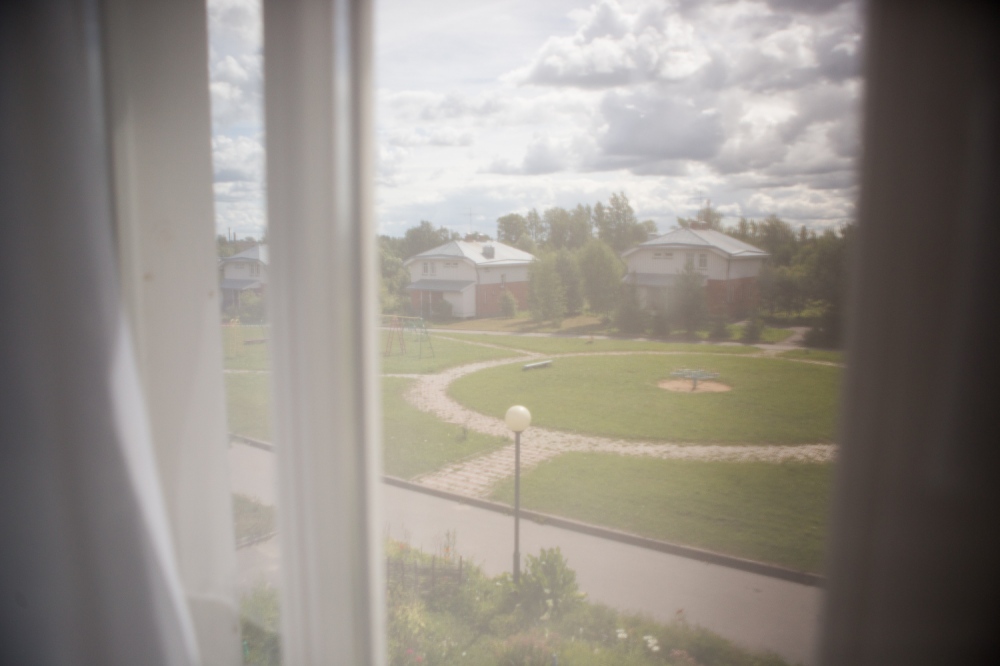 A view of the Pushkin S.O.S. Children's Village from the Patoka family residence. On the property, a large grass field decorated with play structures is surrounded by twelve two-story cottages, all constructed thanks to private funders.The village was founded and built in 2000 making it a relatively new facility and the only of its kind in St. Petersburg, Russia. 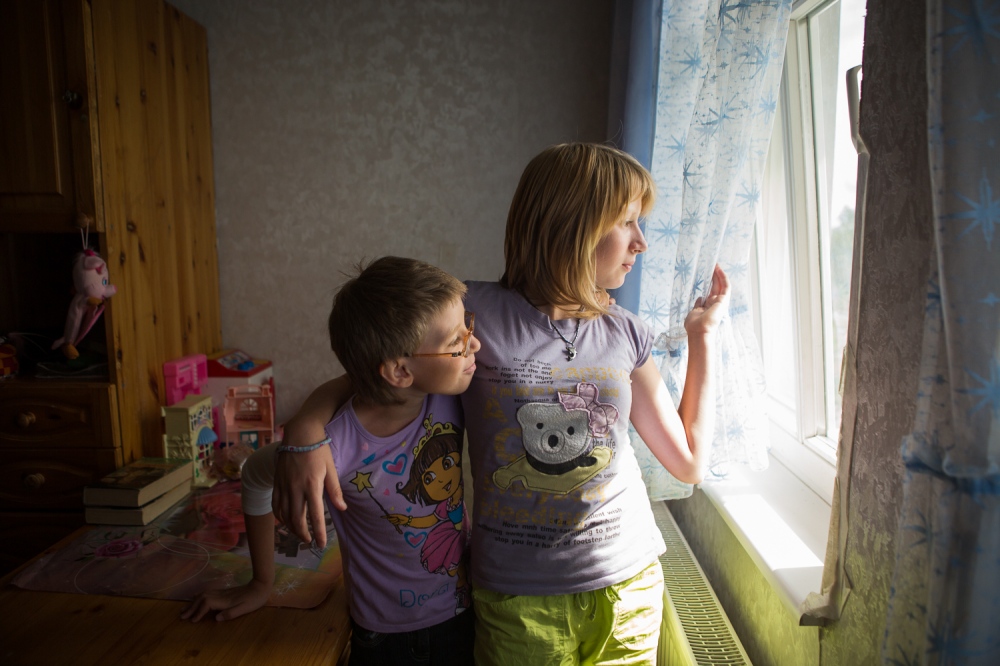 Biological sisters Tamara, 9, and Antonina, 12, look out their bedroom window inside their home in the Pushkin S.O.S. Children's Village. One of the benefits for children entering an S.O.S. Children's village is that they are not separated from their biological siblings as they normally would be in a state facility or state foster care system in Russia. Antonina and Tamara were placed in the S.O.S village with "mama" Antonina two years ago. 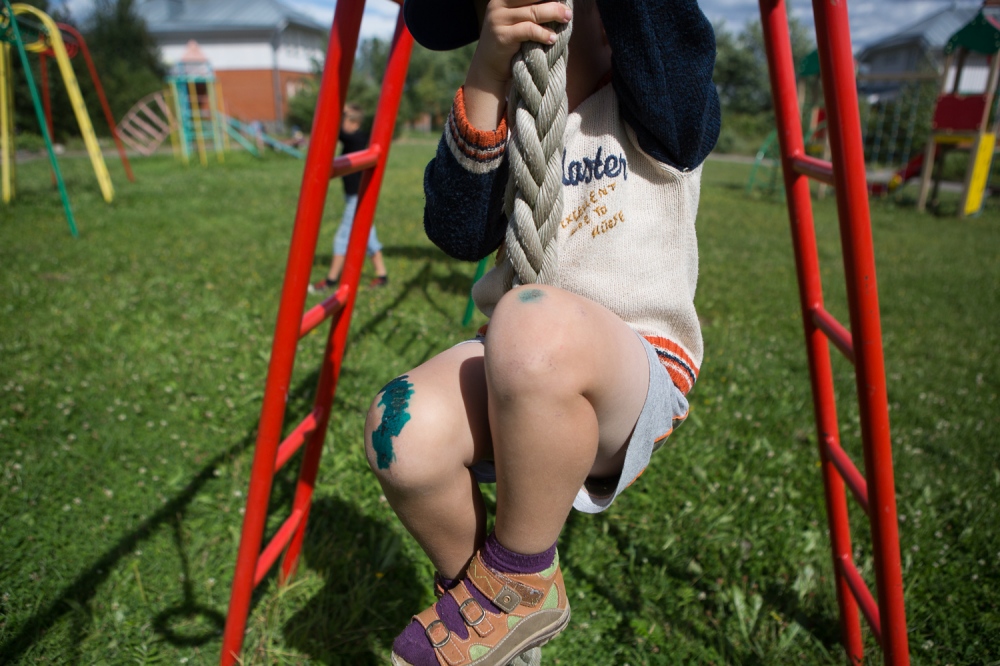 A boy swings from a rope at the playground inside the S.O.S. Village in Pushkin. 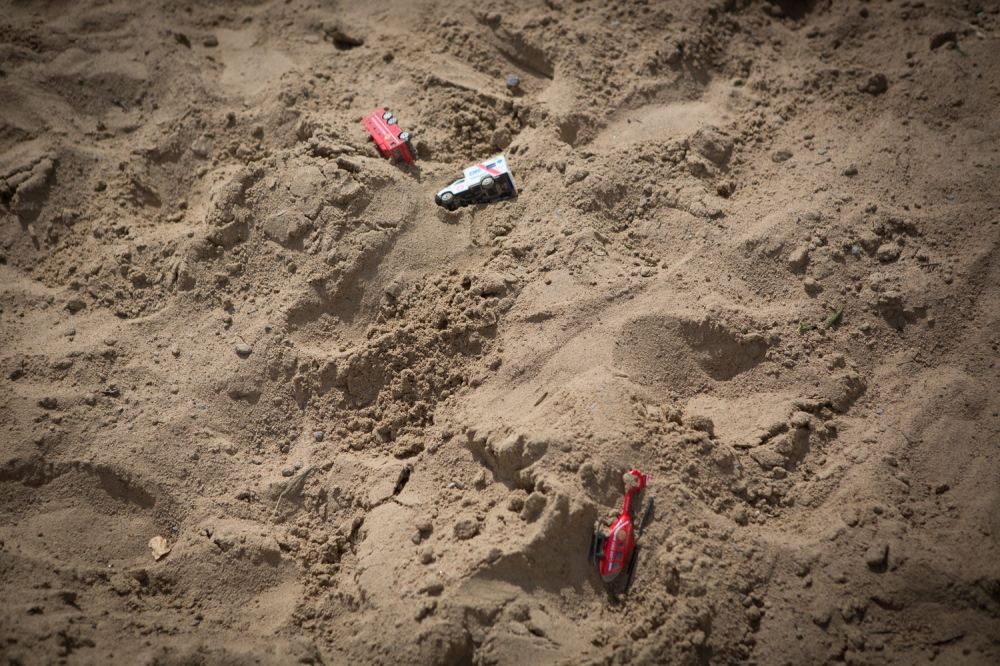 The sandbox at the S.O.S. Children's Village in Pushkin. 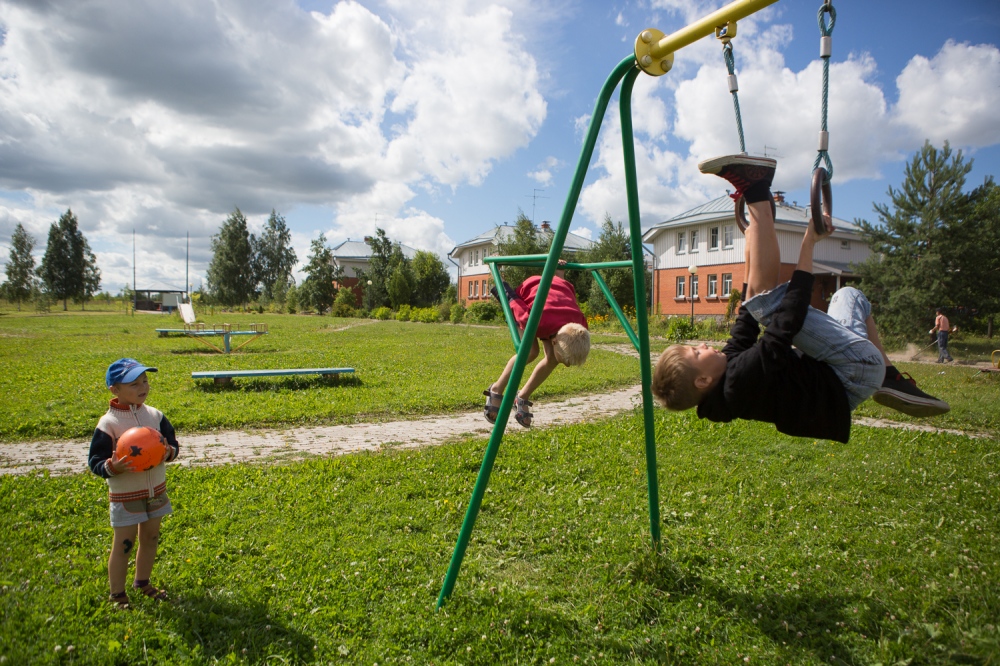 Children play in the village during free time on a warm day in July.  In the summer months, the village is mostly vacated while children go to summer camp or on vacation with their S.O.S. mothers. 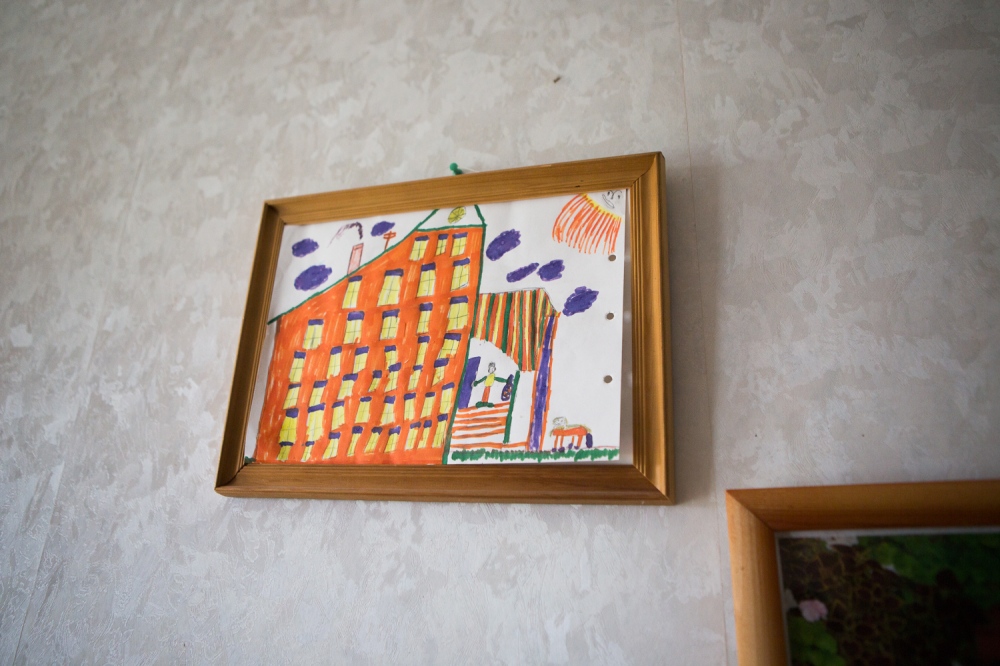 A drawing of the Patoka cottage by Antonina's eldest child Roman. 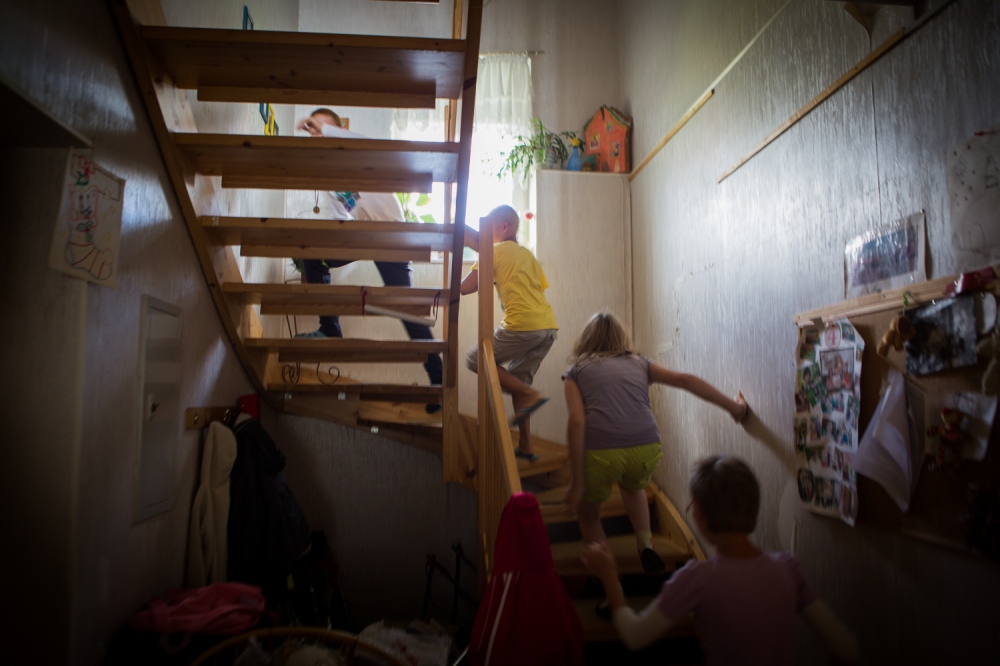 The five Patoka children run upstairs to play in their bedrooms. Antonina Patoka's family currently consists of Roman, 13, Antonina, 12, Denis, 12, Roman, 10, and Tamara 9. During the school months, the children have strict curfew and wake-up times. In addition to their chores and going to school, the children enjoy helping their mama garden vegetables, cooking, and visiting the ocean. 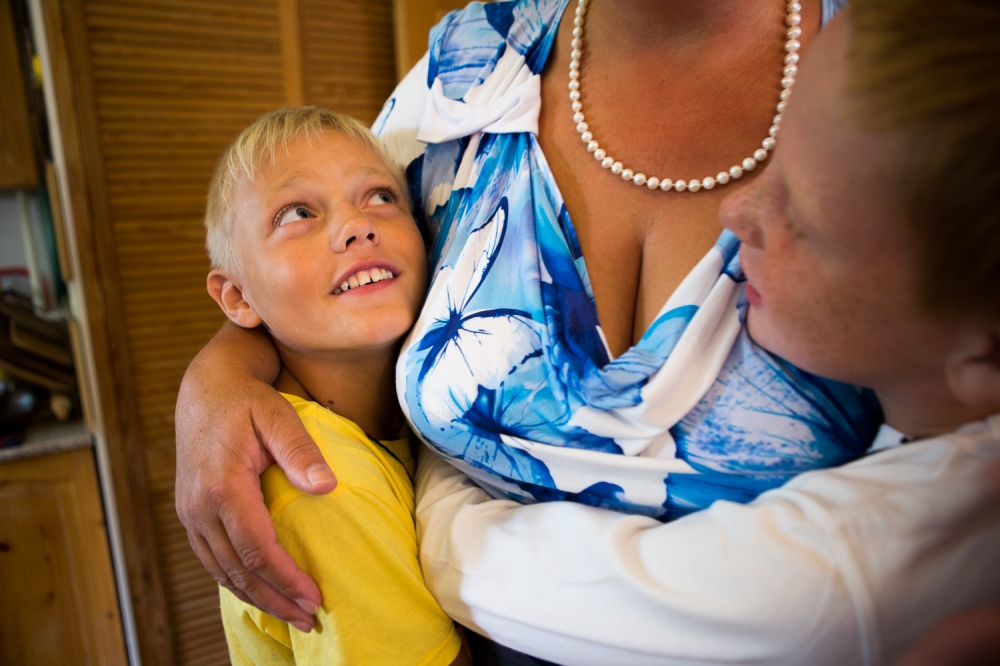 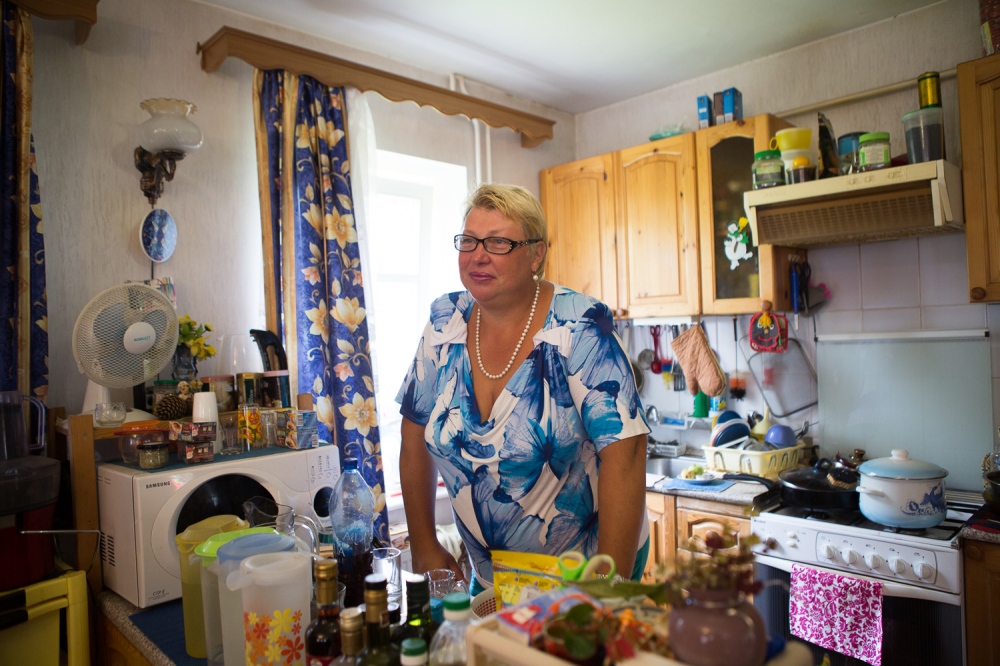 Antonina or "mama" as the children refer to her, stands in her kitchen where she loves cooking meals with her children. Each household is given a budget which the S.O.S. mother is responsible for managing. As a result, each household will have its own character and decor depending on the needs, personality, and make-up of each family. 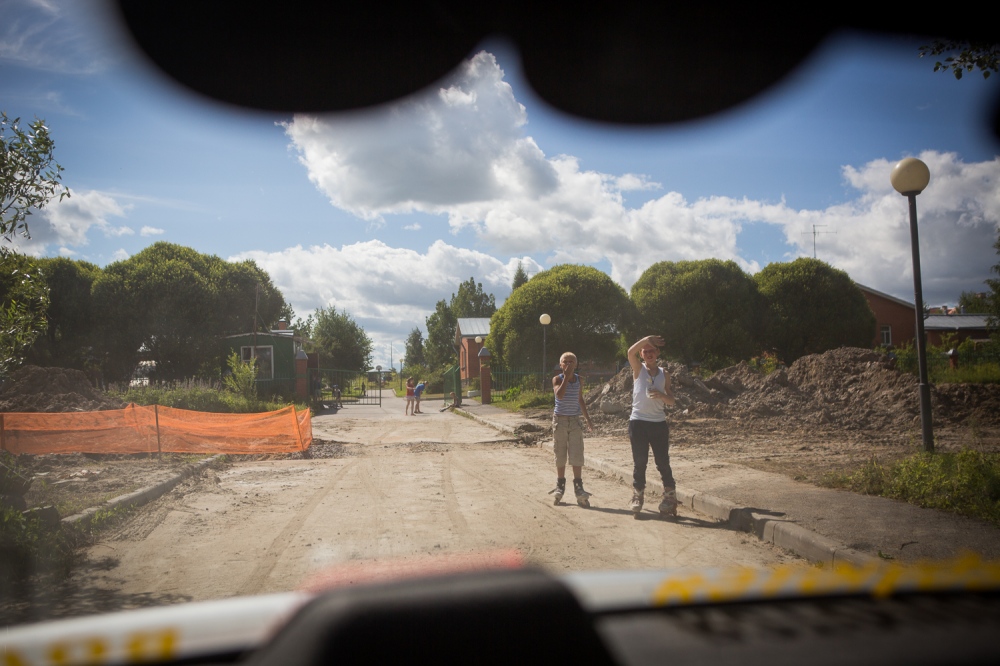 As seen from the back of a car window, the Patoka boys rollerblade at the entrance of the S.O.S. Children's Village.

With her career as a professional discus thrower behind her, Antonina Patoka was in search of a new line of work. Her search ended with a newspaper ad that seeking women wiling to be trained as mothers for orphaned children. Thirteen years later, Patoka, now age 49, has raised five children and is currently mothering five more in the S.O.S. Children's Village in St. Petersburg, Russia.

The S.O.S Children’s Villages (est.1949) is an international non-profitable organization with a mission to provide orphaned children around the world comfortable homes and a stable family environment, led by trained surrogate mothers. According to the organization’s mission statement, the S.O.S. Children’s Village is based on four principles: "every child needs a mother, should grow up naturally with brothers and sisters, and in their own home within a supportive village environment.”


I met Antonina and her five children in July of 2013 when I was granted permission to photograph the Pushkin S.O.S. village in St. Petersburg, Russia. Pushkin, a municipal town in Pushkinsky District of St. Petersburg is located just 15 miles from the city center, providing an ideal suburban landscape for young children.


During my visit, I was surprised to discover the literal manifestation of the proverb “it takes a village to raise a child.” At Pushkin Children’s Village, twelve unique cottages are each inhabited by a single S.O.S. mother and her five to six children. In the wake of a recent controversy over the banning of American adoptions in Russia, I began to wonder why I had never heard of such an orphanage model in the United States.


Of the 133 countries where S.O.S. is active, the United States only has three villages: one in Broward County, Florida and two in the state of Illinois. I hope to continue visiting these villages in other parts of the world, including the U.S. to learn more about the plight of these children and the women who commit their entire lives to them.

By Cassandra Giraldo / Brooklyn, NY — Students at Park Slope Collegiate, a small 6-12 public school in Brooklyn, New York, have been working for..
Jun 11, 2016

The After School Project

By Cassandra Giraldo / Brooklyn, NY — Summary: The @afterschoolproject  (2011-present) is an Instagram-based project that examines how..
May 17, 2016

By Cassandra Giraldo / Brooklyn, NY — April Bueno and Desire Priddie are in their last year of junior high in Brooklyn, NY.  When friends,..
Feb 5, 2014