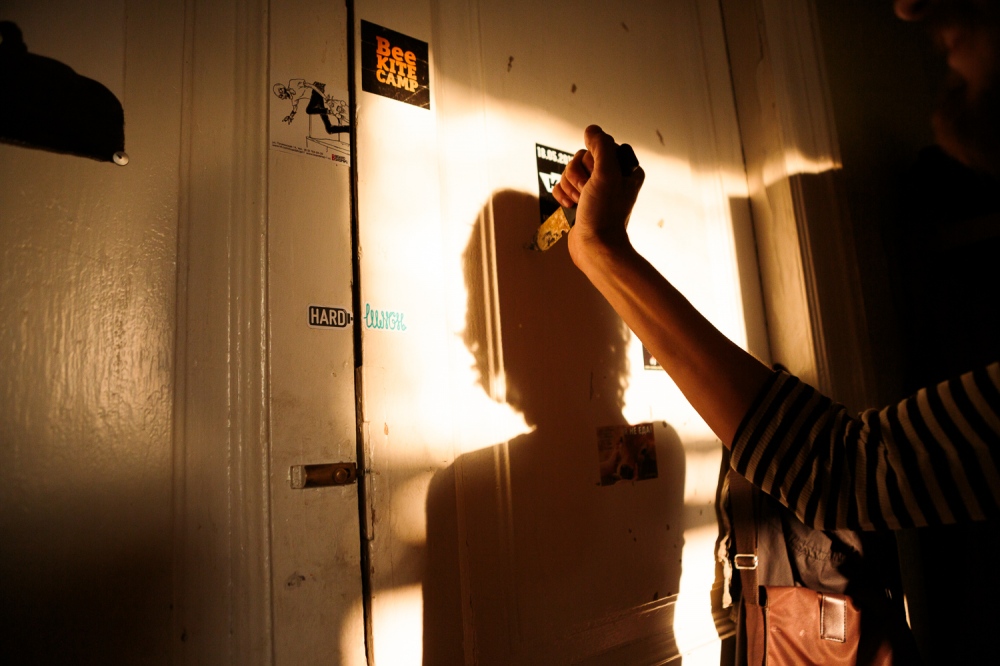 Sasha's roommate, under the influence, jabs a knife through their front door for no reason at all. 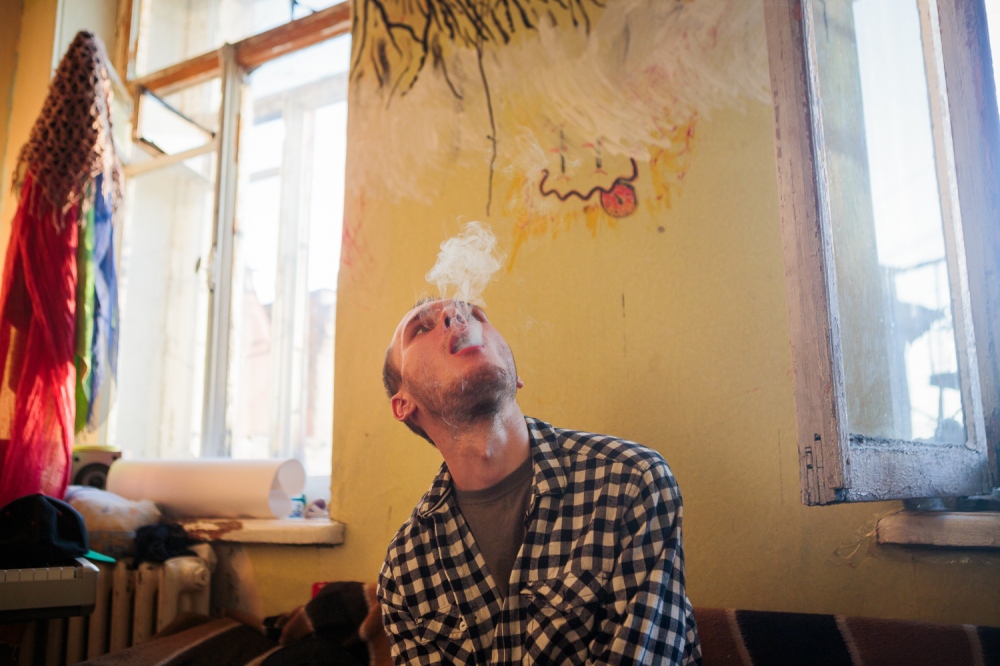 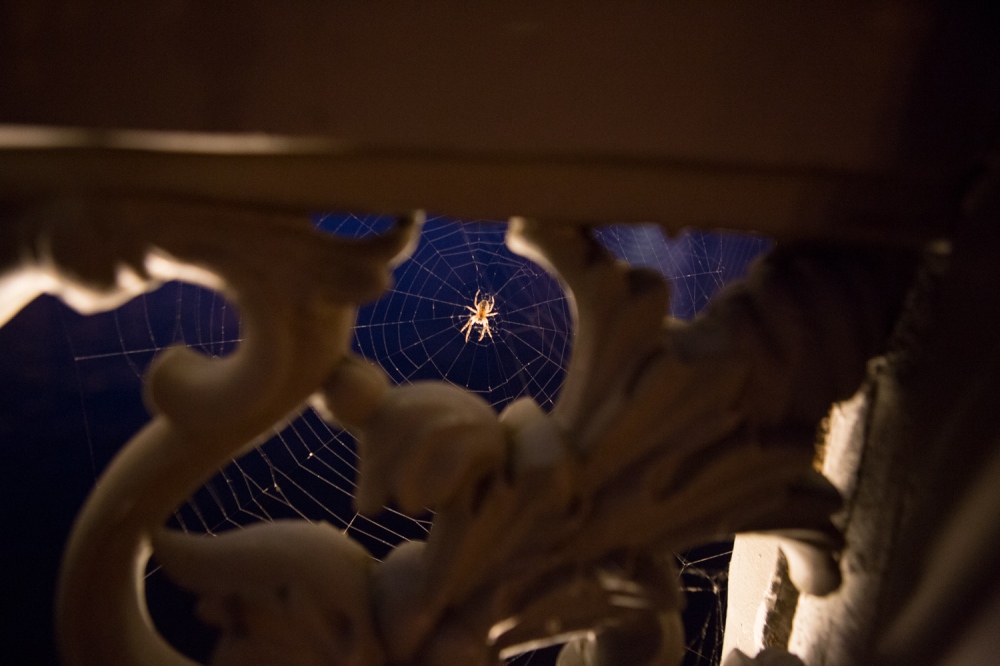 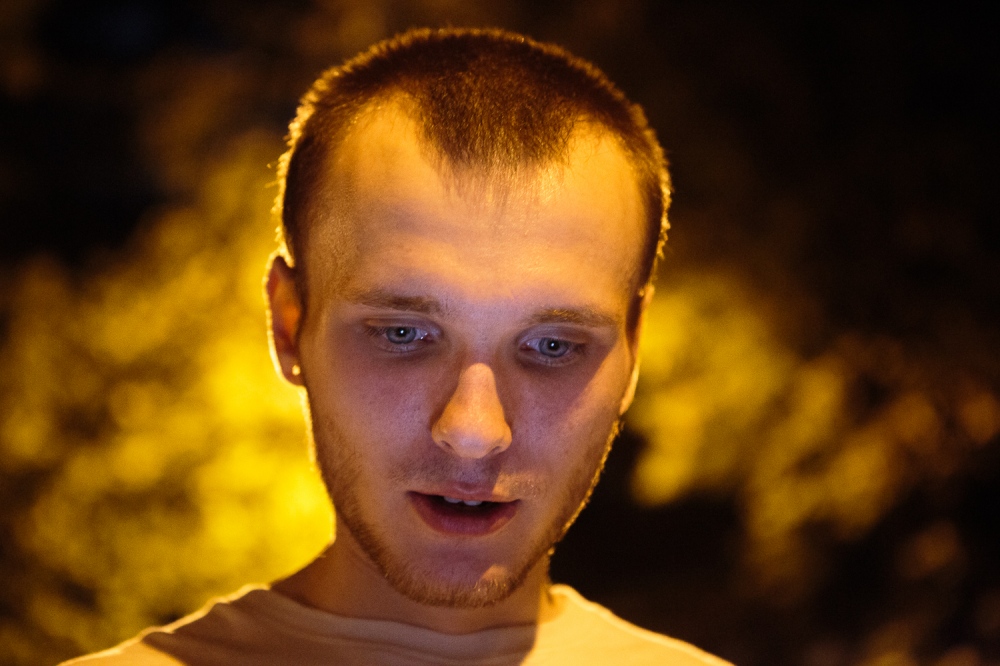 A hole in Alex's ear, left behind from a gauged ear piercing. Alex removed the piercing because of his current engineering job. 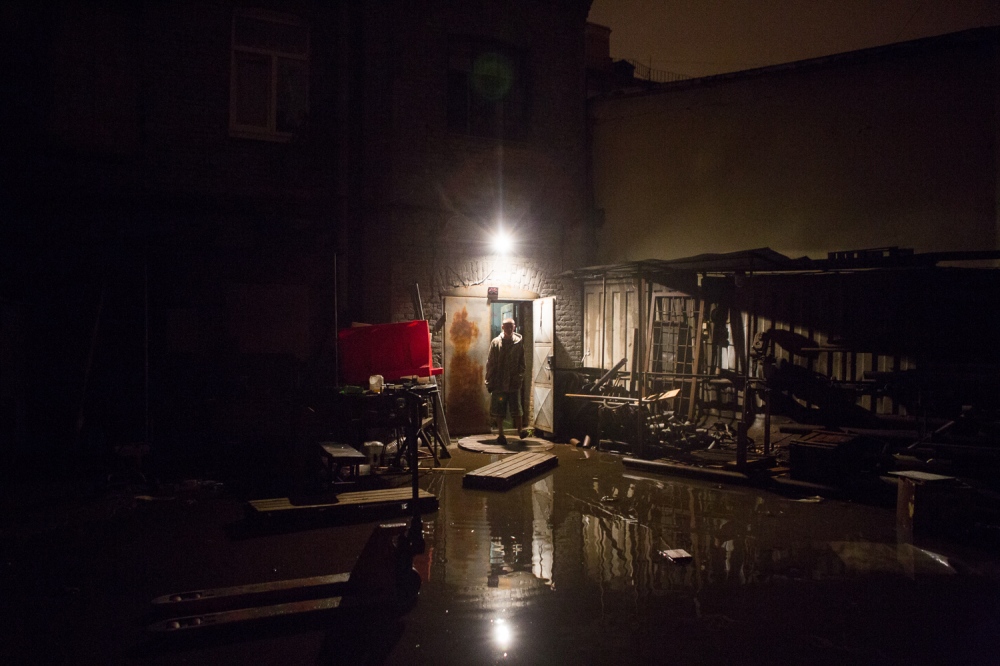 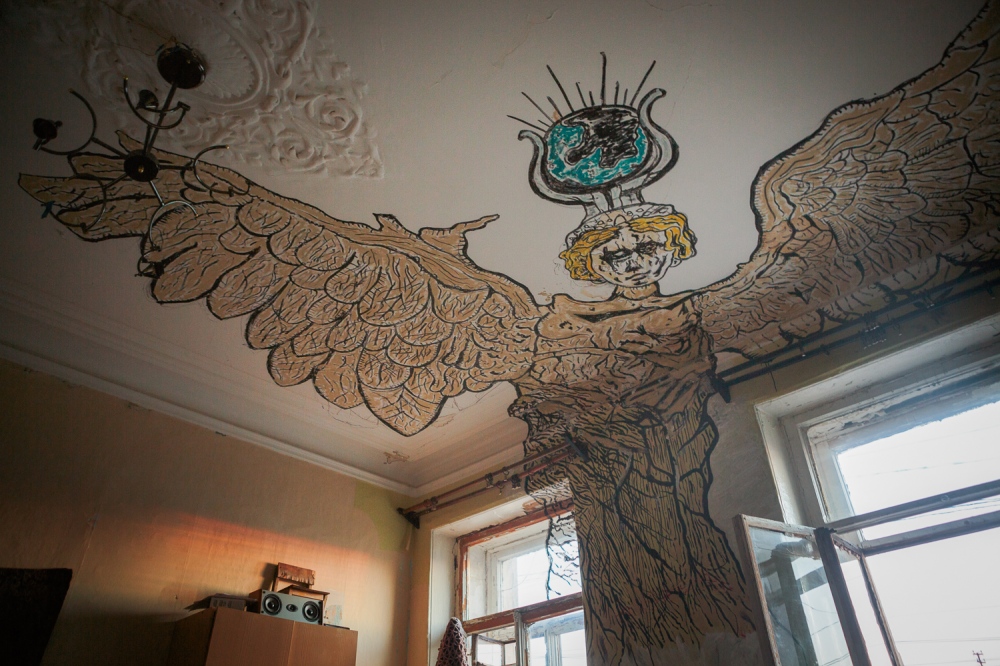 "Nika holds us in her wings," writes Sasha who painted "Nika" the angel on his apartment ceiling. 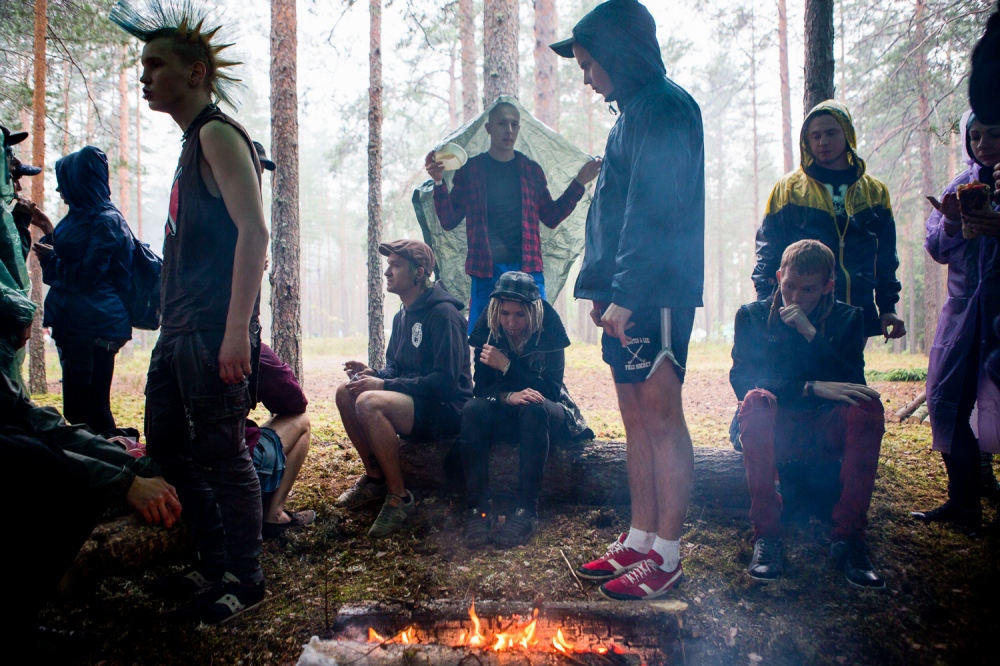 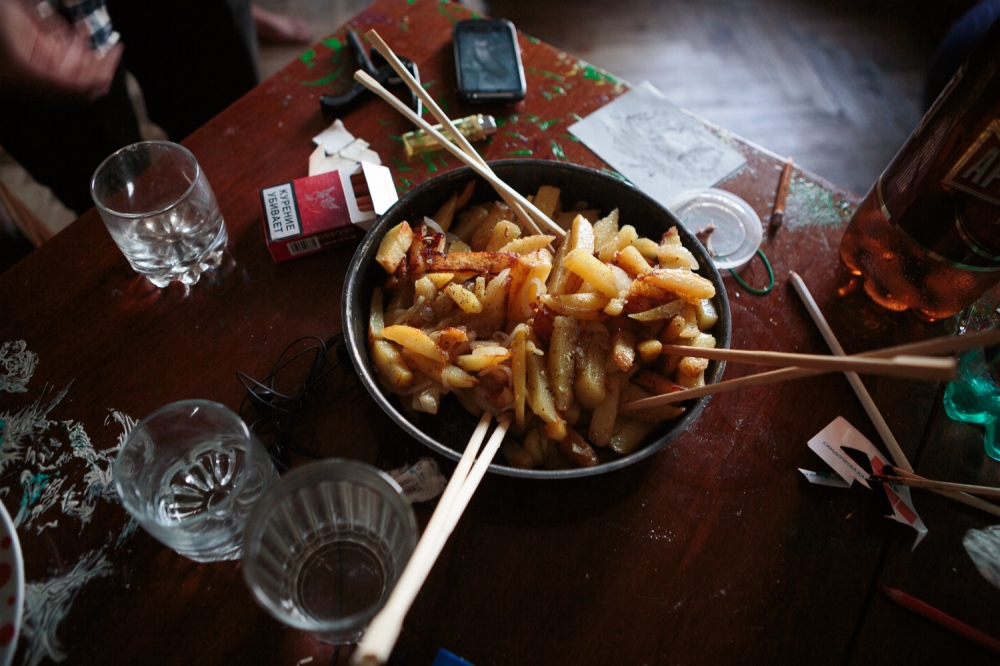 As vegans, Sasha and his friends tend to eat things as simple as potatoes and onions or as they like to call it, "Belorussian pasta." 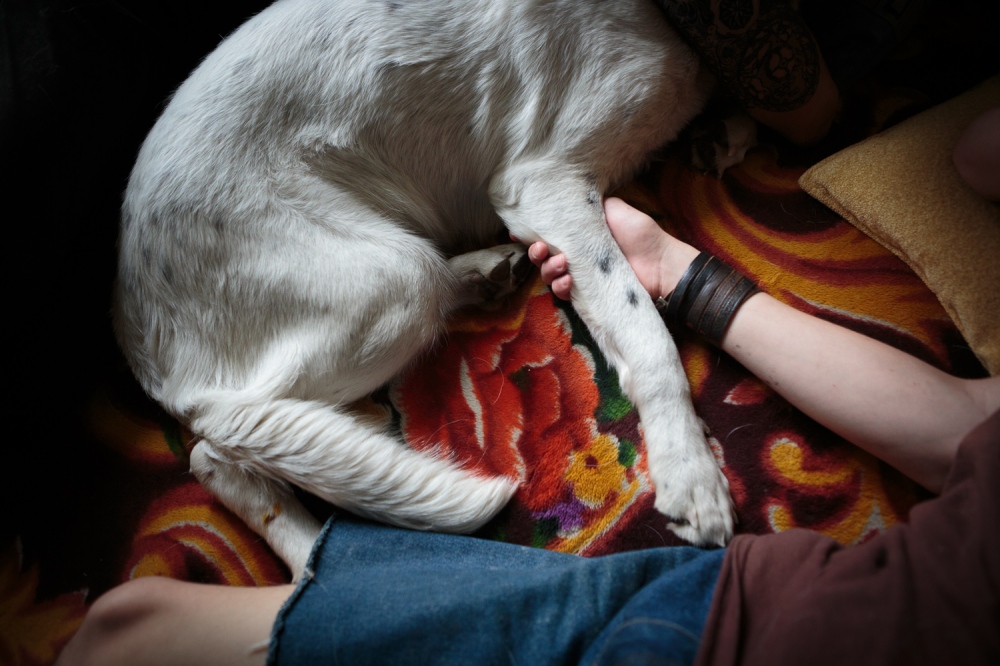 Waking up early morning in the living room that six punk youth and their pets share. 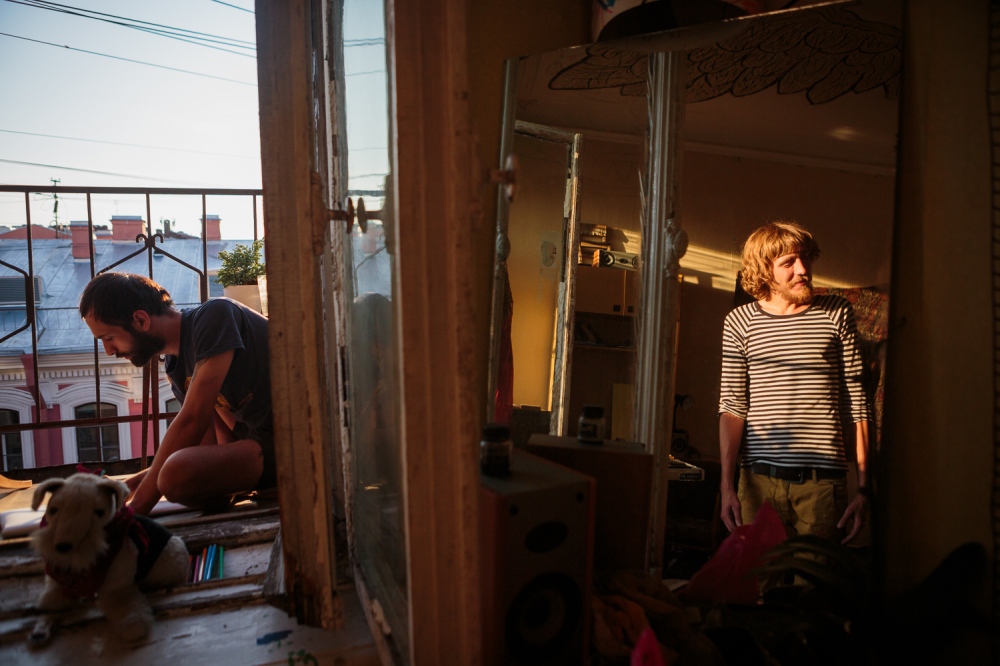 Sasha "Lumpen," draws on the balcony of the apartment he squats in with his roommate, right. 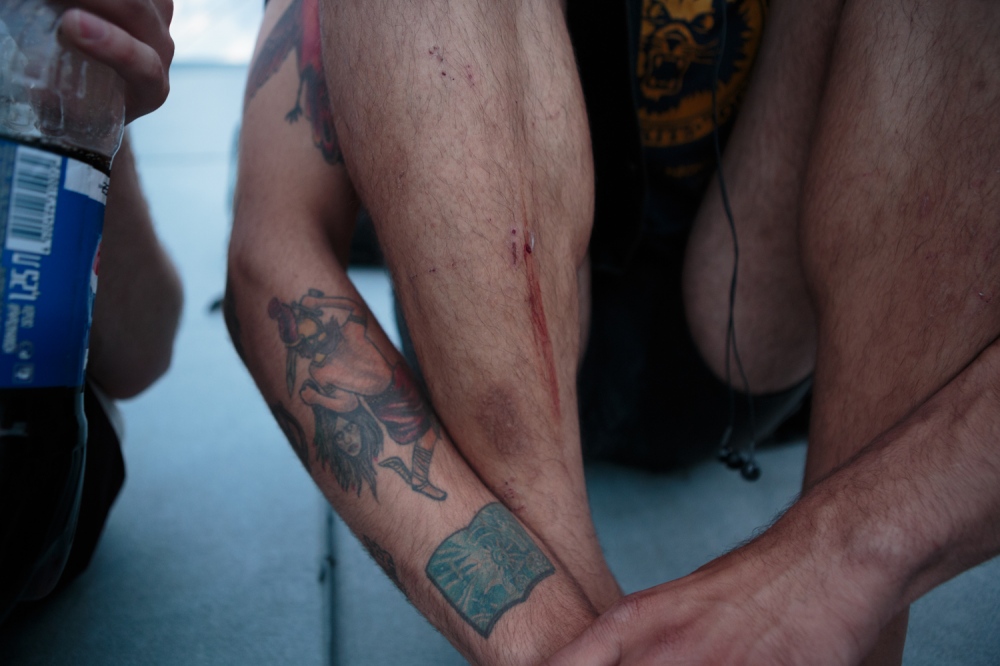 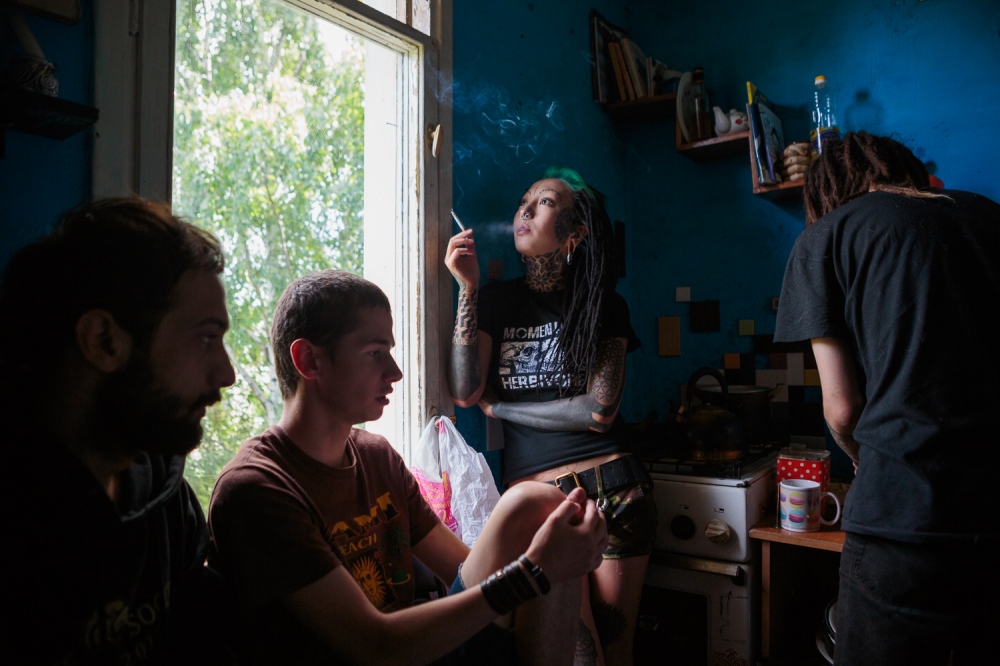 "Girl Sasha," center, smokes a cigarette in her home on Kanonersky Island in St. Petersburg, Russia on July 17, 2013. 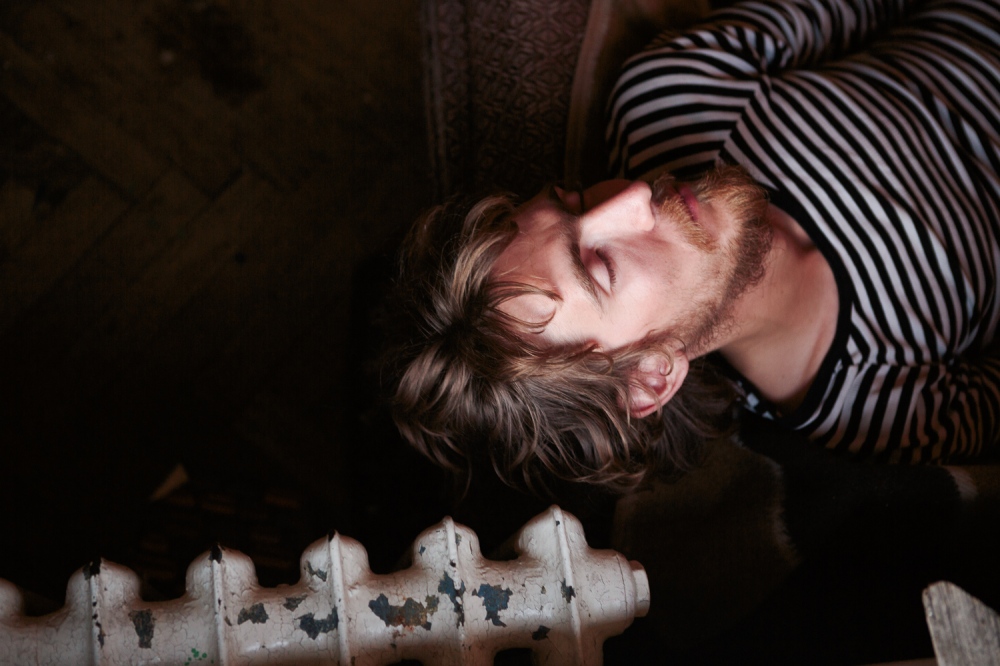 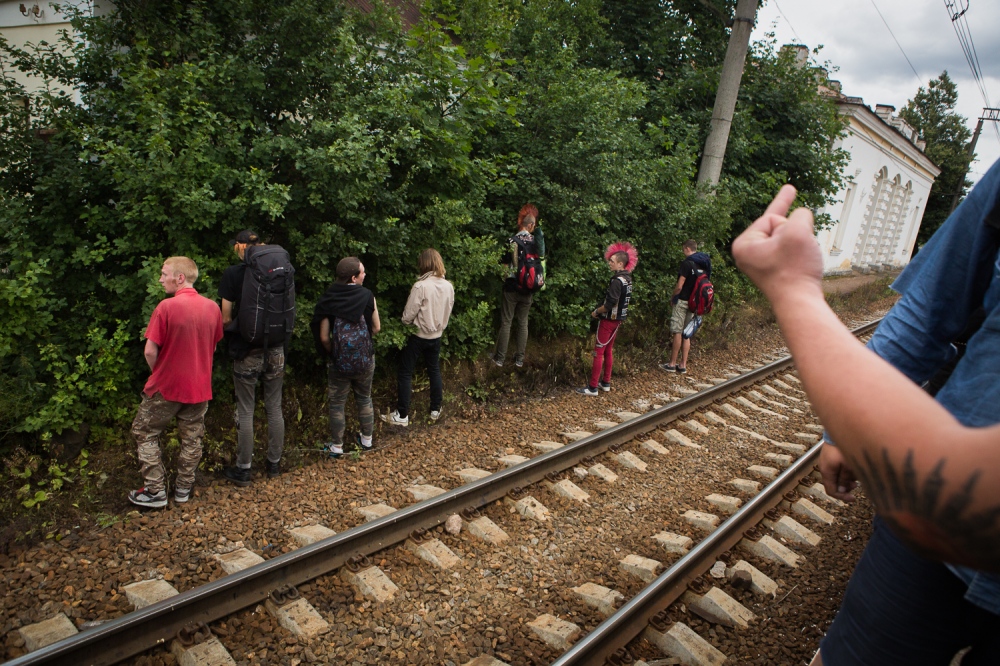 A group of punks relieve themselves after a two-hour train ride on their way to "United Help Fest," a three day d.i.y. punk festival in the woods outside of St. Petersburg on July 18, 2013. 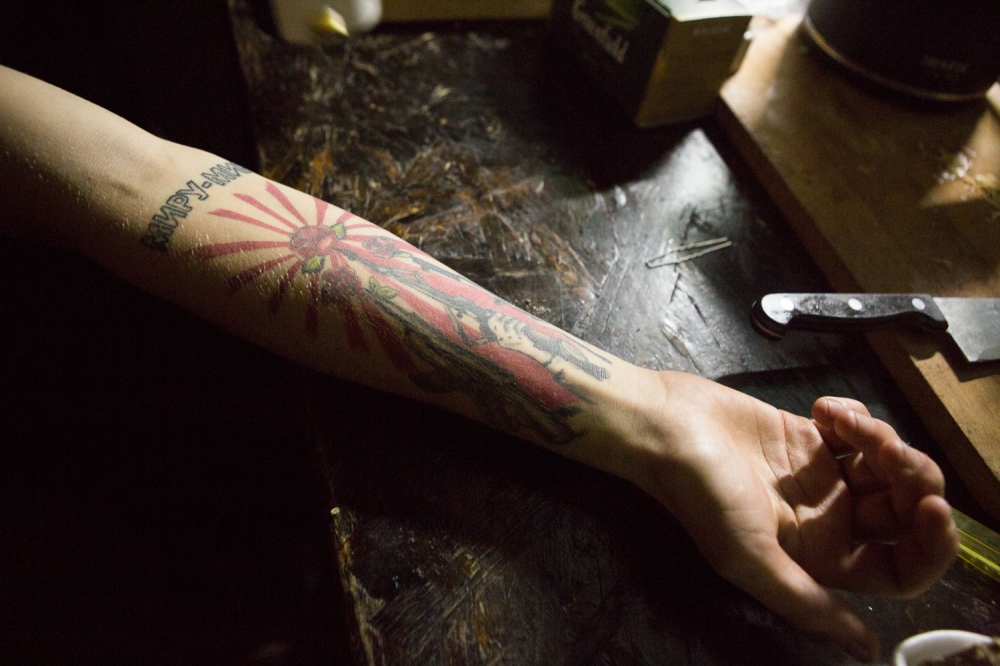 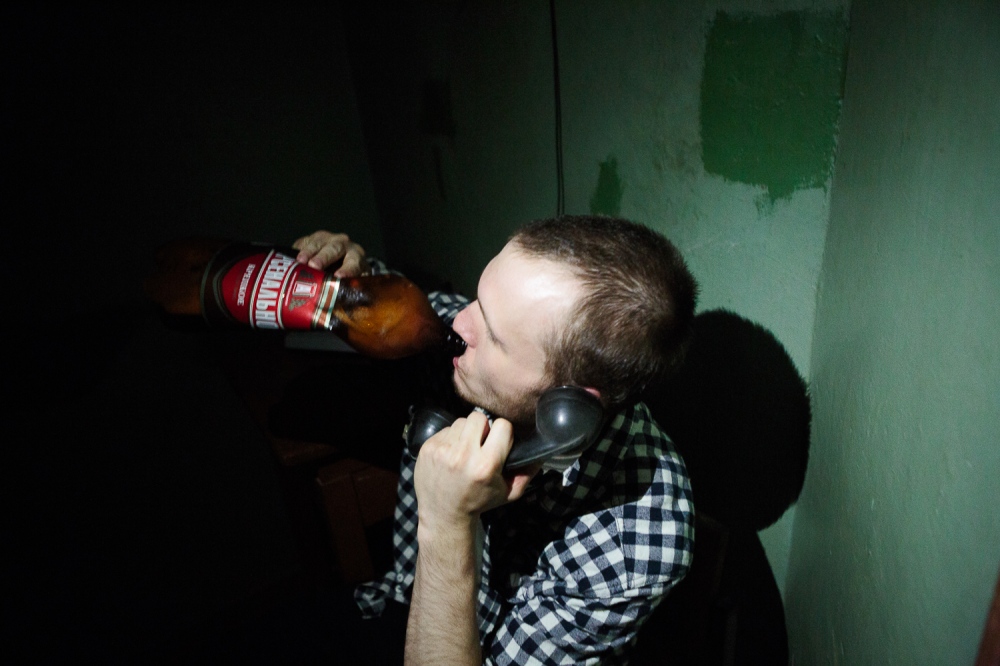 Cheap beer and cigarettes make for the ideal dinner option on a summer night. 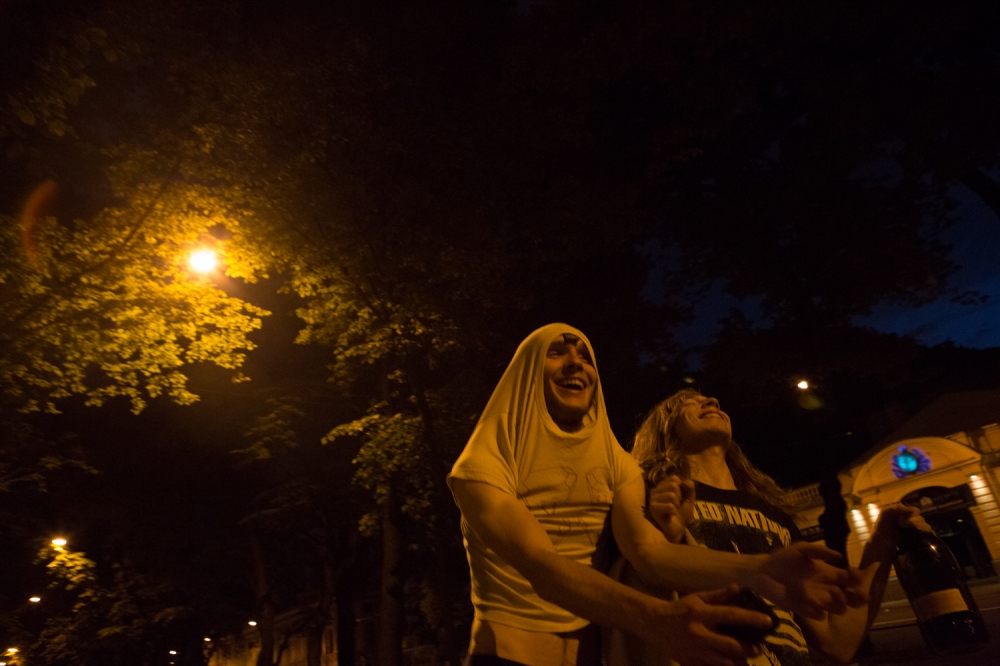 17 of 30 © 2020 Cassandra Giraldo
Alex and Max walk drunkely on the streets of St. Petersburg on a summer evening. 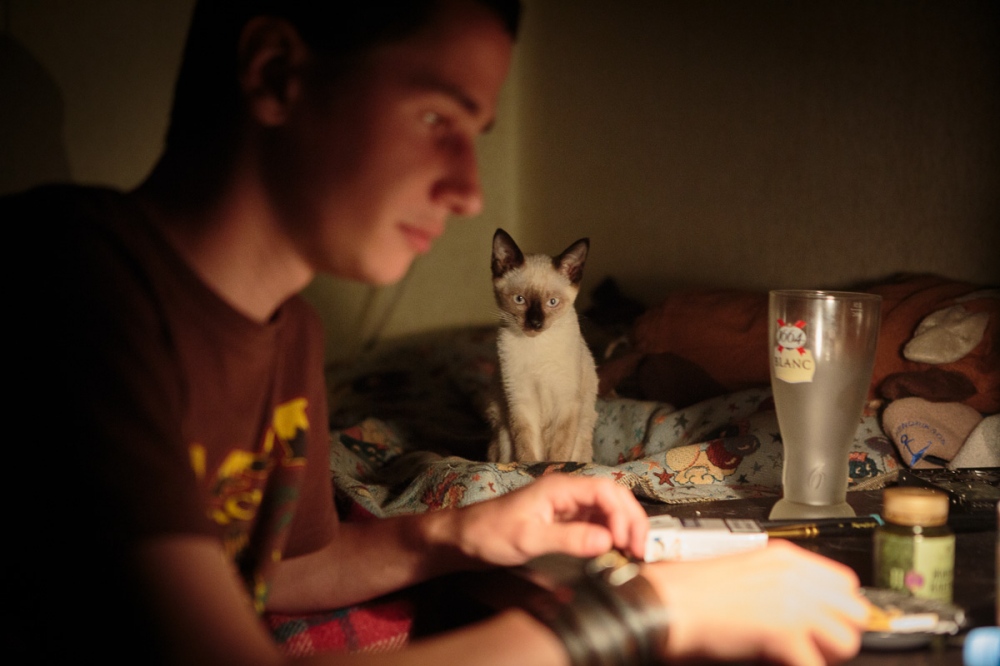 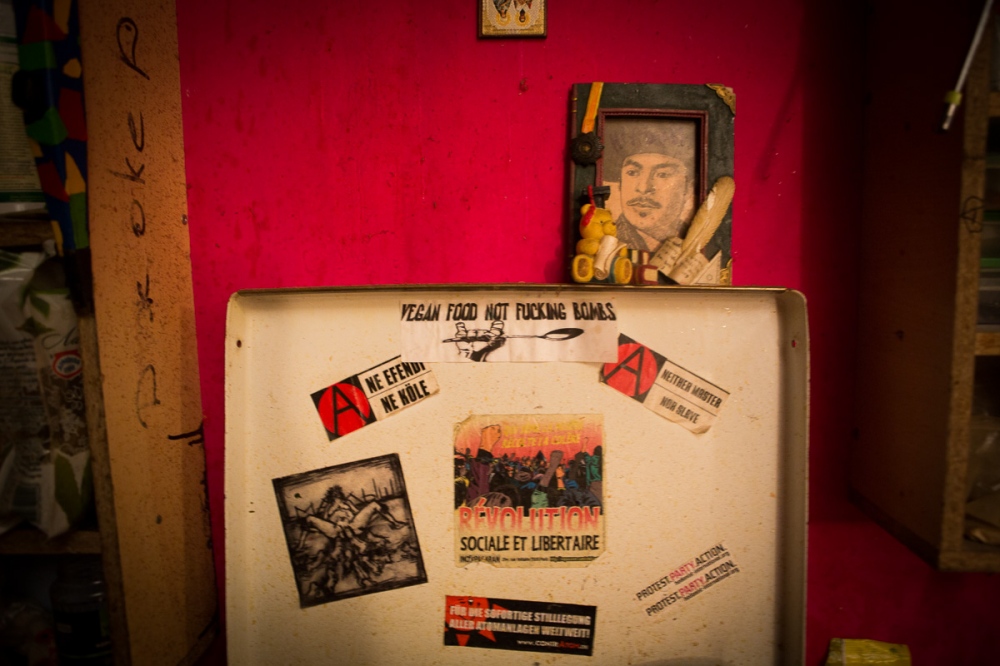 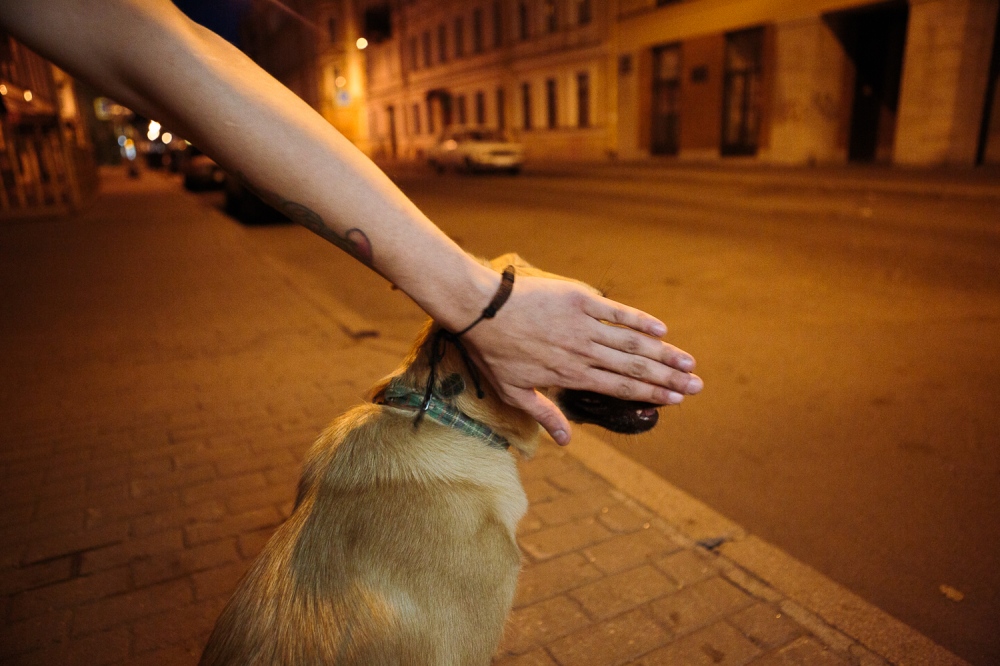 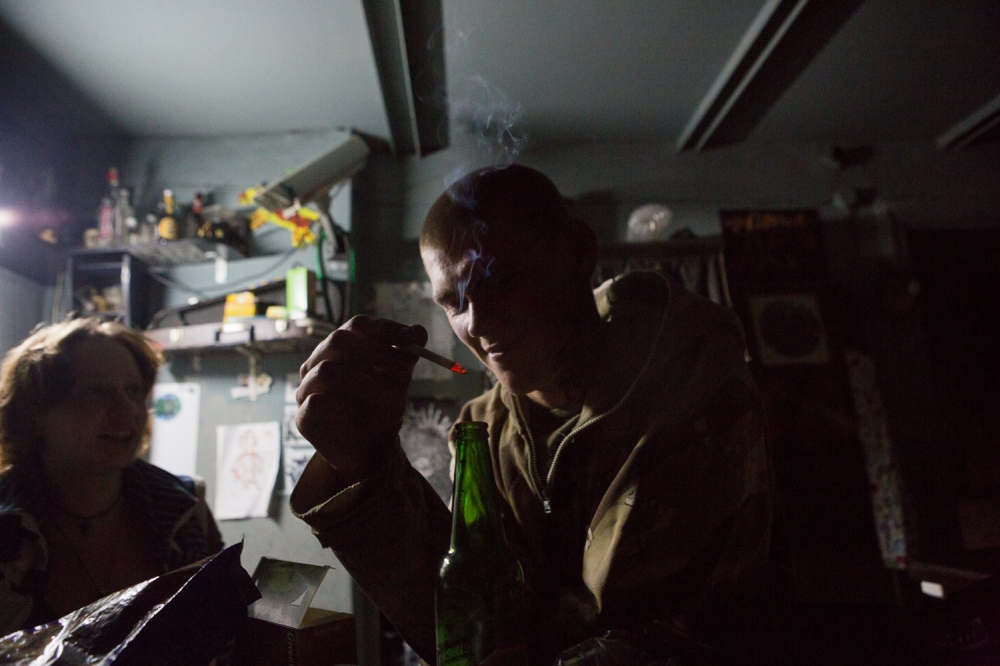 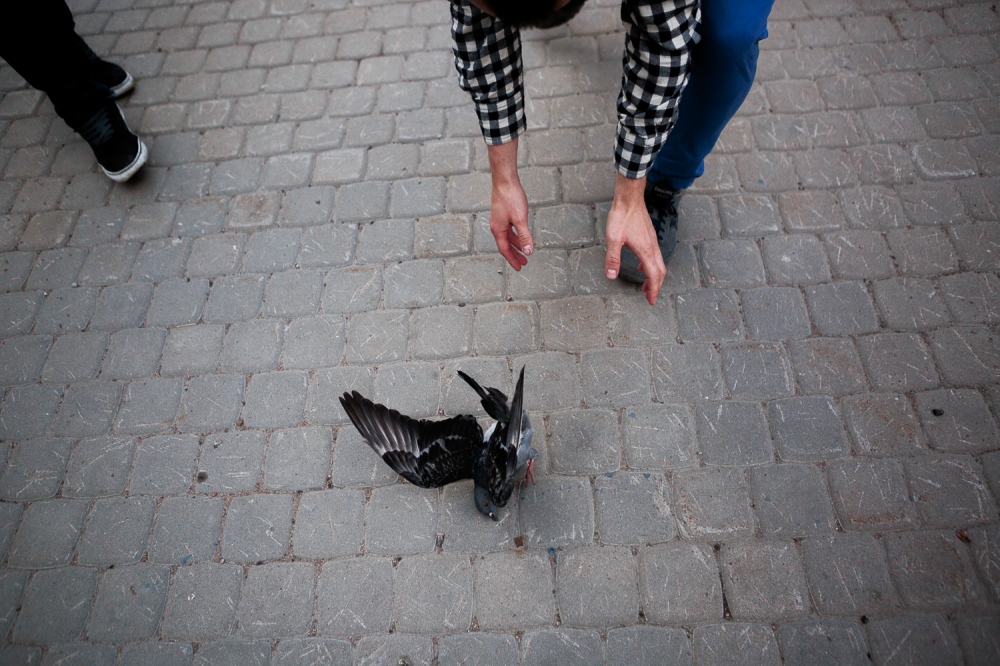 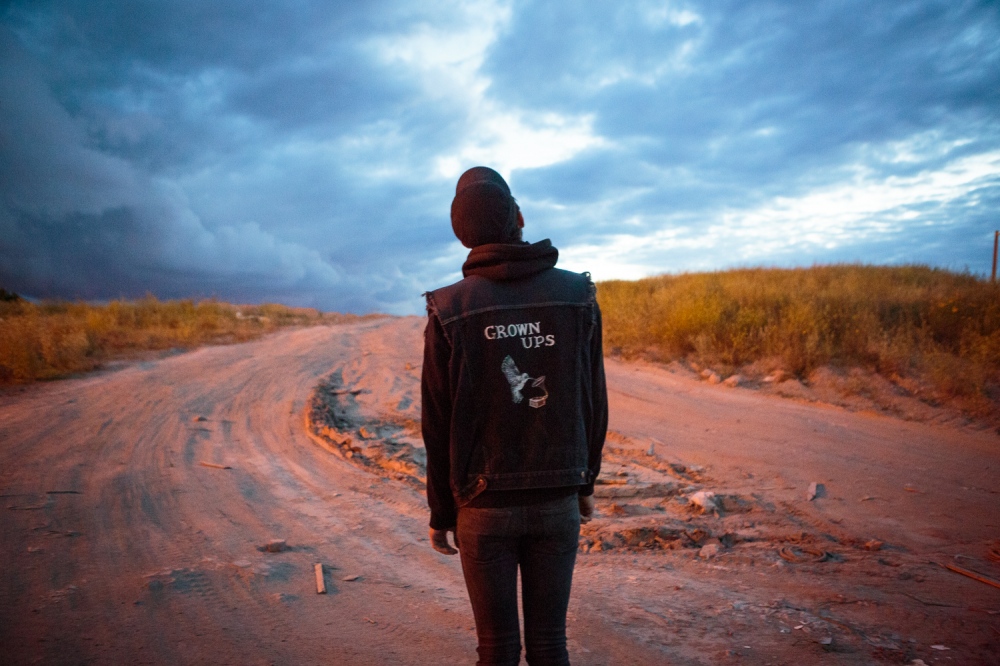 Sasha "Lumpen," looks for the beach on Kanonersky Island in St. Petersburg, Russia on July 17, 2013. 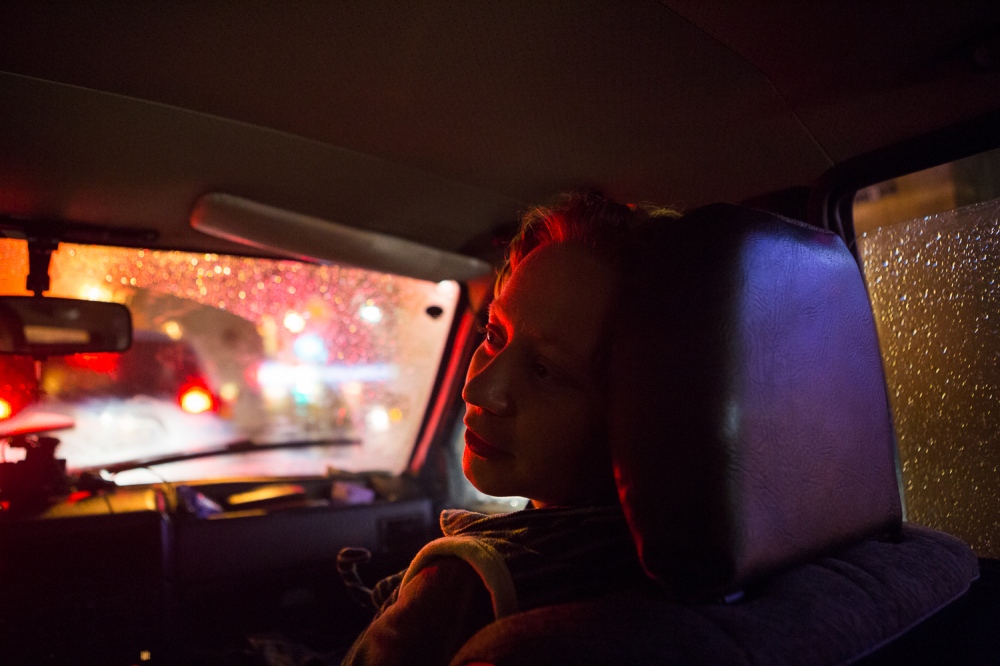 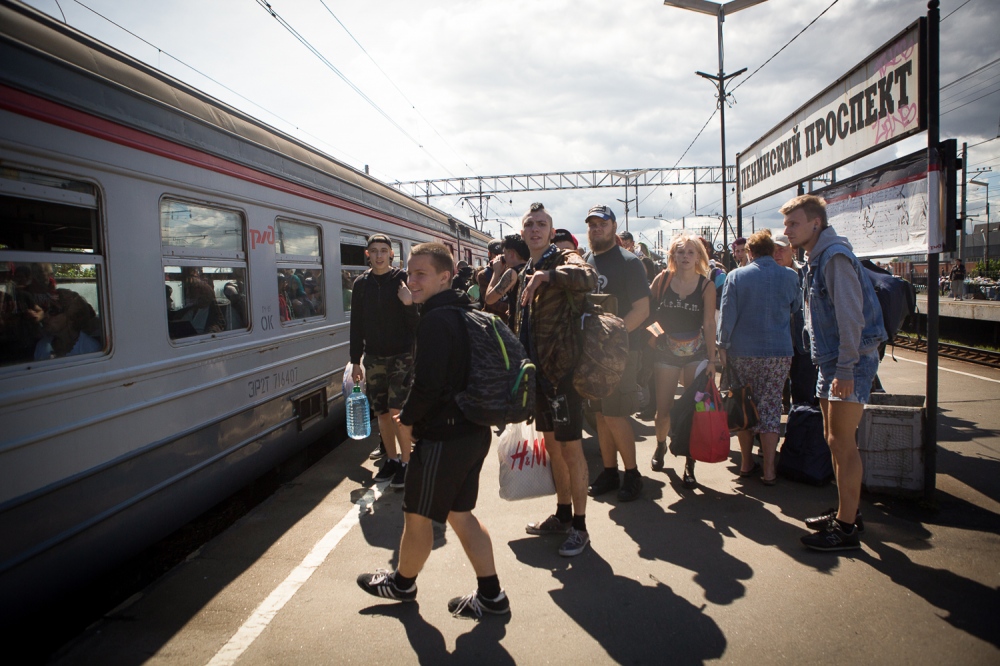 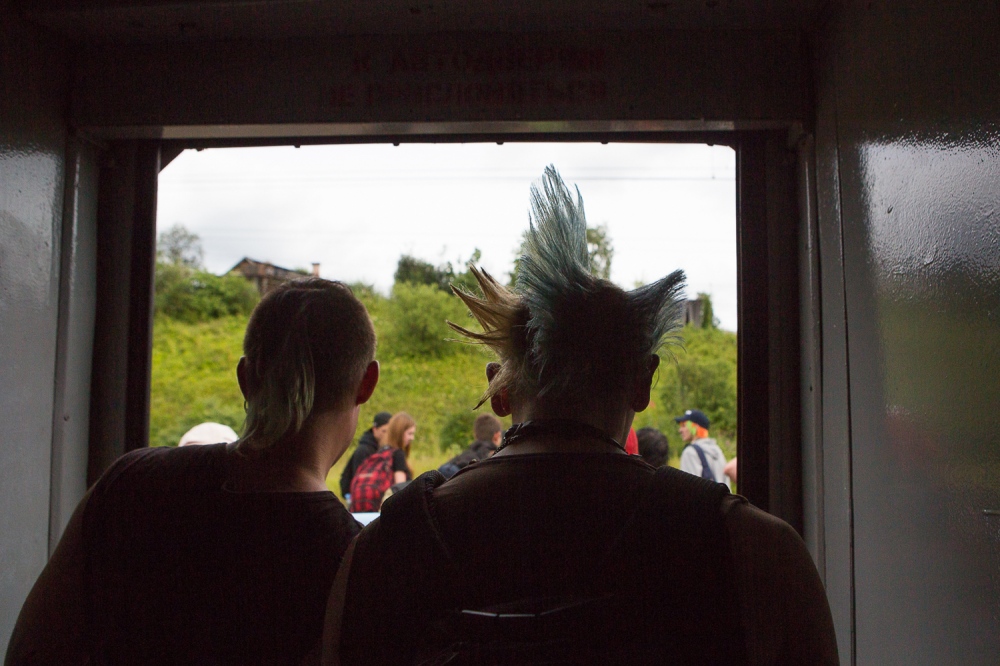 Exting the train they hopped, masses of punk youth head into the woods to the "United Help Fest." 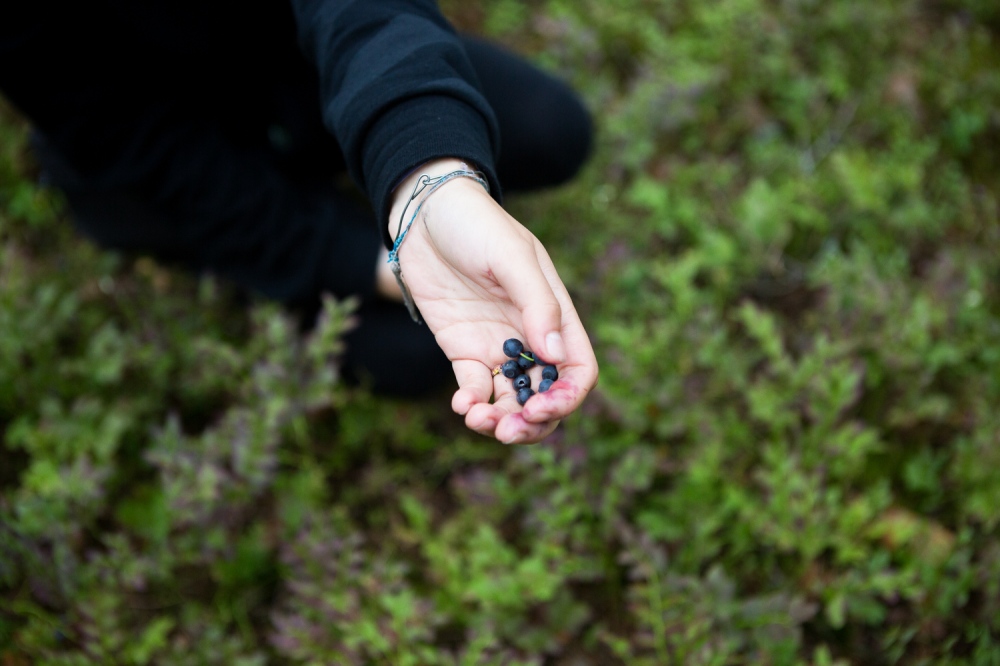 Picking wild blueberries for dinner at the "United Help Fest," campsite in the woods outside of St. Petersburg, Russia on July 18, 2013. 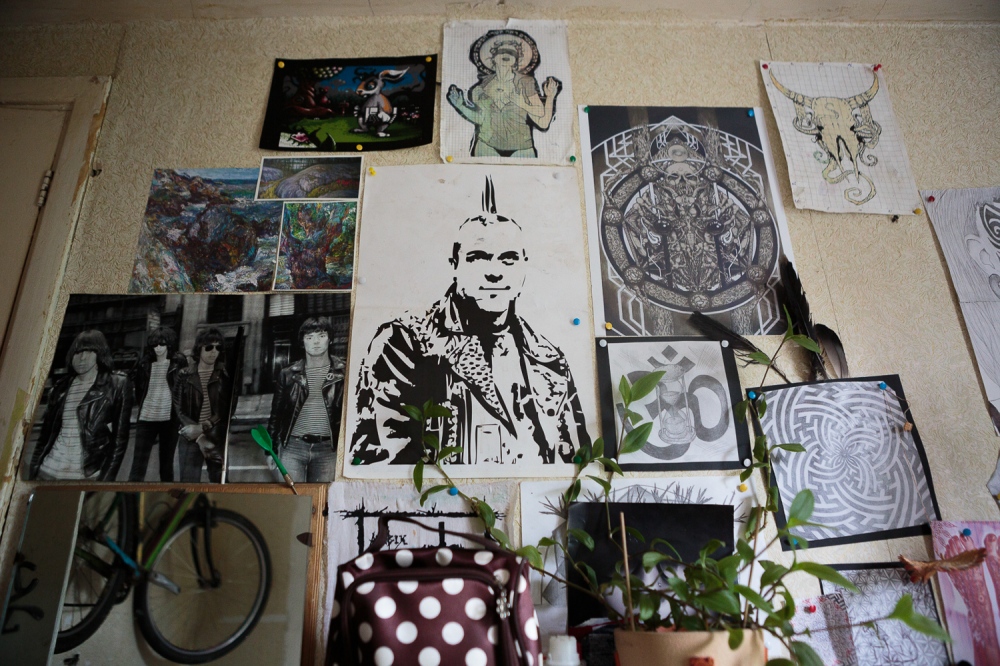 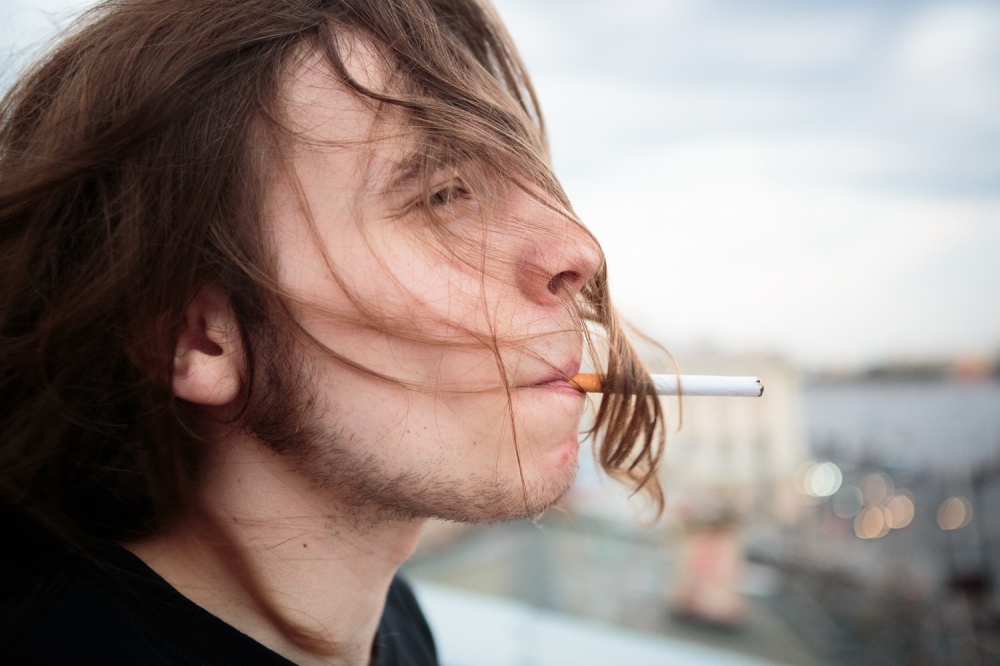 Maxim Chepel, visiting from Moscow, smokes a cigarette with his friends after breaking into a rooftop. 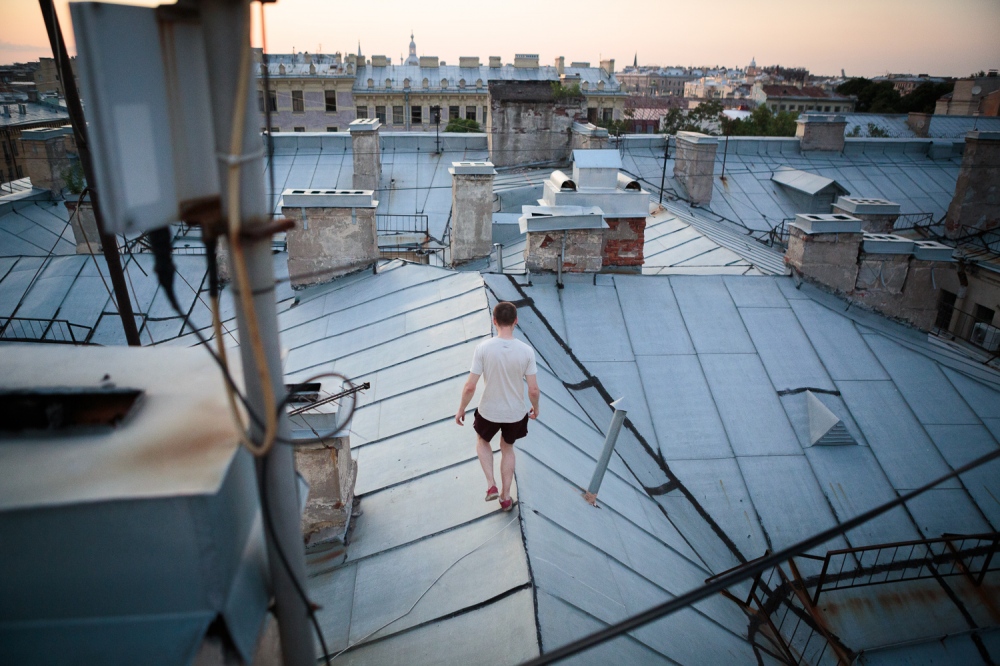 Alex Averianov, 23, climbs a rooftop in the center of the city during the summer's White Nights on July 14, 2013.

While the punk movement’s glory days seem to have come and gone in the United States, being a punk in many countries including Russia is considered an affront to the nation.

In the summer of 2013, I traveled to St. Petersburg, Russia for a weeklong photo workshop with the intention of unraveling the reality behind the group Pussy Riot’s infamous performance piece that put them behind bars. During this period, I serendipitously met a group of young male punk youth who surprised me with their warmth, hospitality, and “gentleness” as they welcomed me into their raucous world. While I had originally set out to document the “real punks” of Russia, I became less interested in their punk rebellion than in their likeness to me—discontented and ignored millennials navigating a noisy and digital globalized world with a surprising amount of sensitivity.

The powerful shared human experience of simply being young hit home when one day, one of my subjects Sasha “Lumpen” offered me a vegan plate of “Belarusian” potatoes and with a reassuring gaze said to me in broken English, "don't worry, we're gentle punks." Just like that, I was no longer the photographer or the “American girl” but a fellow twenty-something lost in our two country’s combative politics.

These young people’s interest in the global Occupy movement, in world peace, and their frustration with not being heard, while complicated by their political backdrop, are no different than the global cry heard all over the world by youth in crisis. Their story of discontented youth is one heard all over the world and one I hope to continue documenting. If not in Russia, in unsuspecting countries and places like Colombia, Indonesia, South Africa, Burma, and even East Los Angeles where young people are tapping into their anarchic energy despite the enormous risks they face from oppressive regimes and rapid urbanization.

While I haven’t been back to Russia since photographing these young people, part of me will always channel the spirit of a gentle punk: just a young voice fighting to be heard.

By Cassandra Giraldo / Brooklyn, NY — Students at Park Slope Collegiate, a small 6-12 public school in Brooklyn, New York, have been working for..
Jun 11, 2016

The After School Project

By Cassandra Giraldo / Brooklyn, NY — Summary: The @afterschoolproject  (2011-present) is an Instagram-based project that examines how..
May 17, 2016

By Cassandra Giraldo / St. Petersburg, Russia — With her career as a professional discus thrower behind her, Antonina Patoka was in search of a new line of..
Nov 20, 2015

By Cassandra Giraldo / Brooklyn, NY — April Bueno and Desire Priddie are in their last year of junior high in Brooklyn, NY.  When friends,..
Feb 5, 2014