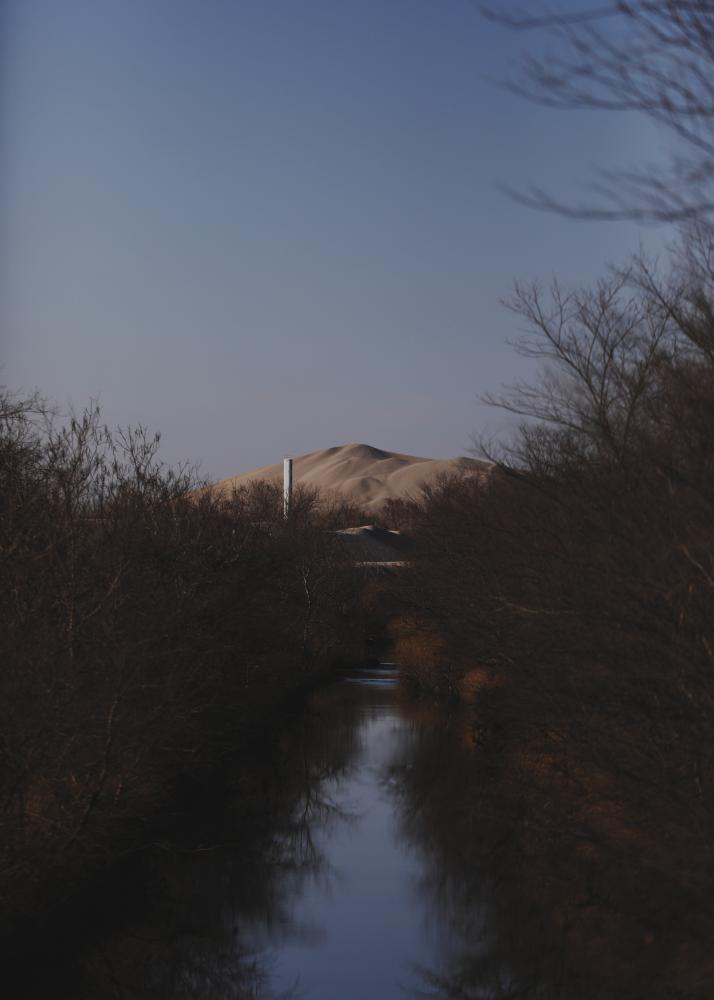 1 of 13 © 2020 Ethan Weston
Looking north from the ghost town of Douthat, Oklahoma along Tar Creek a chat pile rises like a mountain from the ghost town of Picher, Oklahoma. Tar Creek runs between the former towns of Picher and Cardin, Oklahoma. The EPA superfund site in the area gets its name from the creek. Water is everywhere around Picher and the surrounding area. When the mines were abandoned around 1970, the miners turned off the water pumps and old tunnels were flooded. The acidic and contaminated water found its way into the local aquifer.
This is an ongoing project​​​​

The town of Picher, Oklahoma is haunted – not by ghosts but by the people that used to live there. Picher consists of empty run-down buildings, barren cracked roads and a mountain range of mining waste. Yet, every November, hundreds of people line the streets to celebrate Christmas together, reunited as a community that once was.

The story of Picher is one of greed and ecological destruction. When powerful mining companies pulled every mineral they could out of the ground, they abandoned Picher. In their wake they left an environmental disaster so destructive, the town was declared uninhabitable.

Even so, nearly a decade later, the people of Picher still love their town, even after the U.S. government paid them to leave. Many have fond memories of playing on chat piles or dried slag ponds as children. Every June, alumni from the Picher-Cardin High School attend a reunion just down the road in Miami, Oklahoma. And in summer, I'm told it's not uncommon to see people wandering through the empty lots like restless specters through empty halls, keeping the name, "Picher, Oklahoma" alive through their memories. 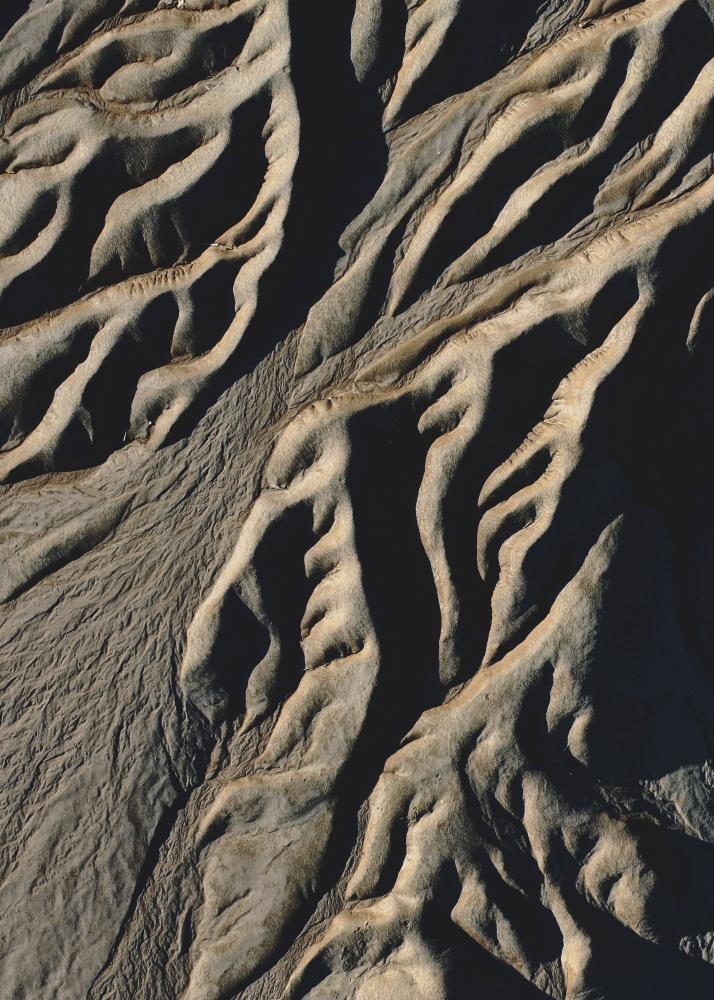 3 of 13 © 2020 Ethan Weston
Piles of chat aren't ever very far out of sight in Picher. The piles are leftover mining waste from Picher's past. On windy days the contaminated dust, gravel and grit gets blown all over town. When people lived there people played on and around the chat piles all the time. And, when people lived there, high levels of lead were found in the blood of children. Higher than average rates of miscarriages were reported in women in the area too. 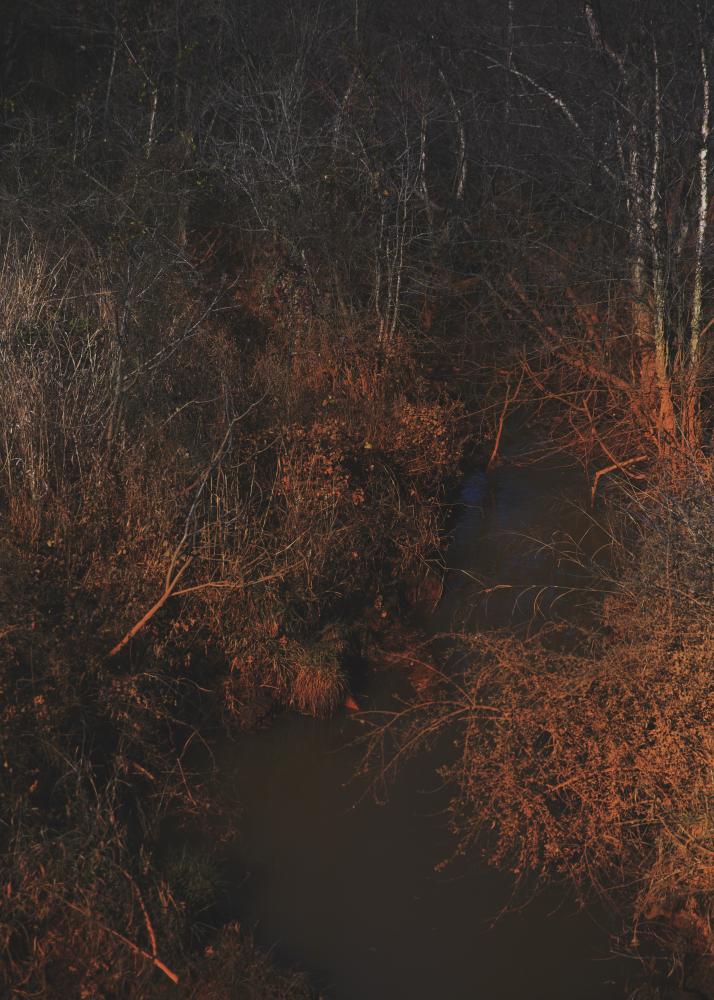 4 of 13 © 2020 Ethan Weston
A tiny, unnamed creek flows out from an old mining site near the ghost towns of Picher, Cardin and Douthat in Oklahoma. The orange color on the plants is from oxidized metals which are in the water. The water itself is also orange and acidic from mine waste. This tiny creek flows into Tar Creek. Eventually Tar Creek flows into the Neosho River and from there into the Grand Lake O’ The Cherokees. 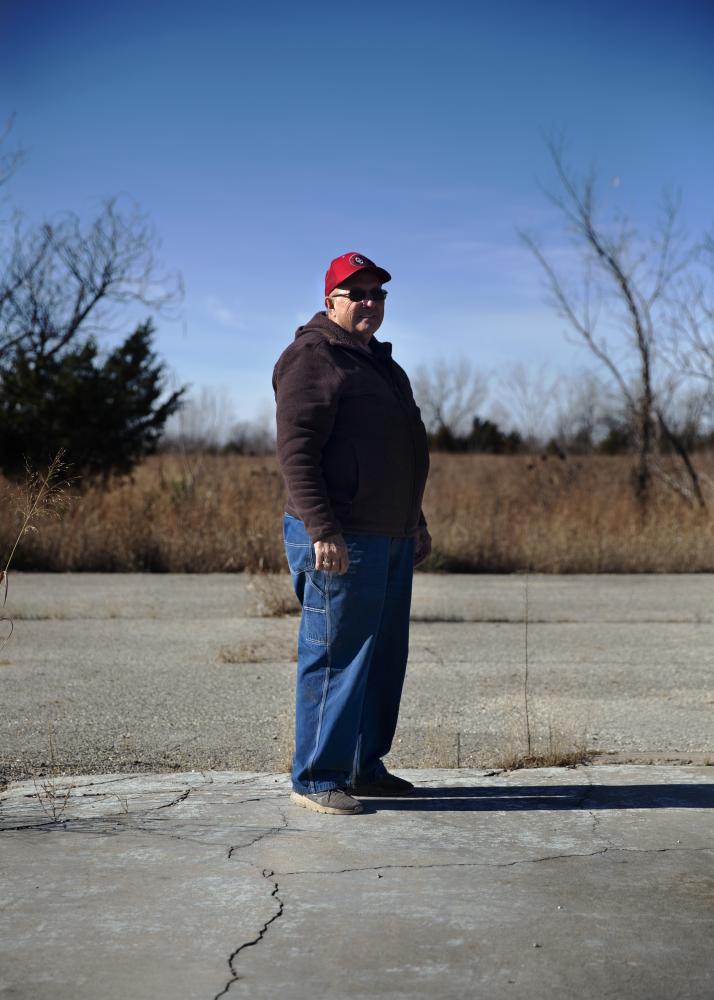 5 of 13 © 2020 Ethan Weston
Tom Houston poses for a portrait. Houston told me I'd never find another group of people that loved their town the way Picher's former residents still love the town. 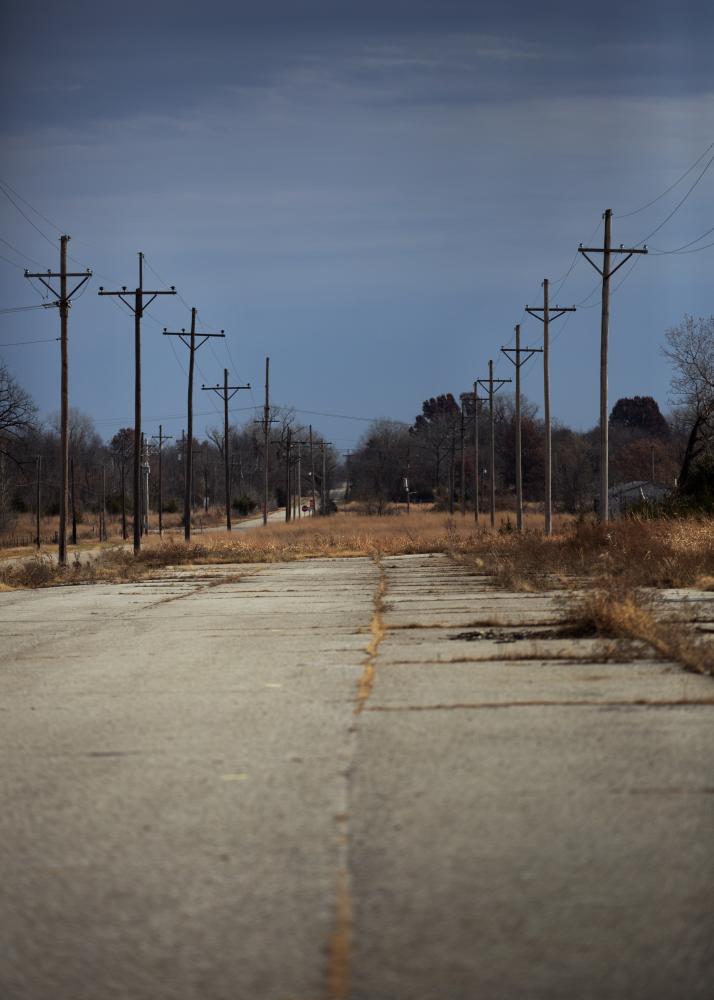 6 of 13 © 2020 Ethan Weston
Power lines jut out of the ground all over Picher. Evidence of the town that once was. Mary Ann Heck and her brother Jon Douthitt told me when they were kids they would climb all over the chat piles in town and played ball on the dried remains of a slag pond. 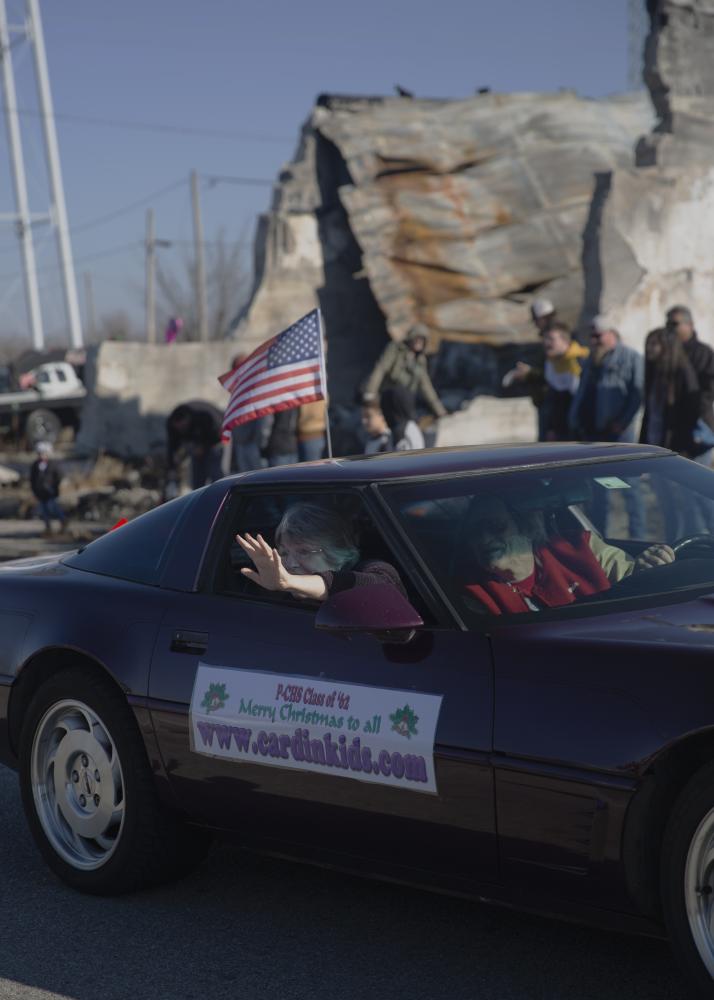 7 of 13 © 2020 Ethan Weston
Picher's annual Christmas parade was like Torn Houston's words made manifest. The whole event felt more like a family reunion. People ran into the middle of the parade to hug people on floats and or shouted across the road at their long ago neighbors. "When they make a lake they move the whole town together to a new location. That's what they should have done to Picher," Mary Ann Heck (not pictured) told me. 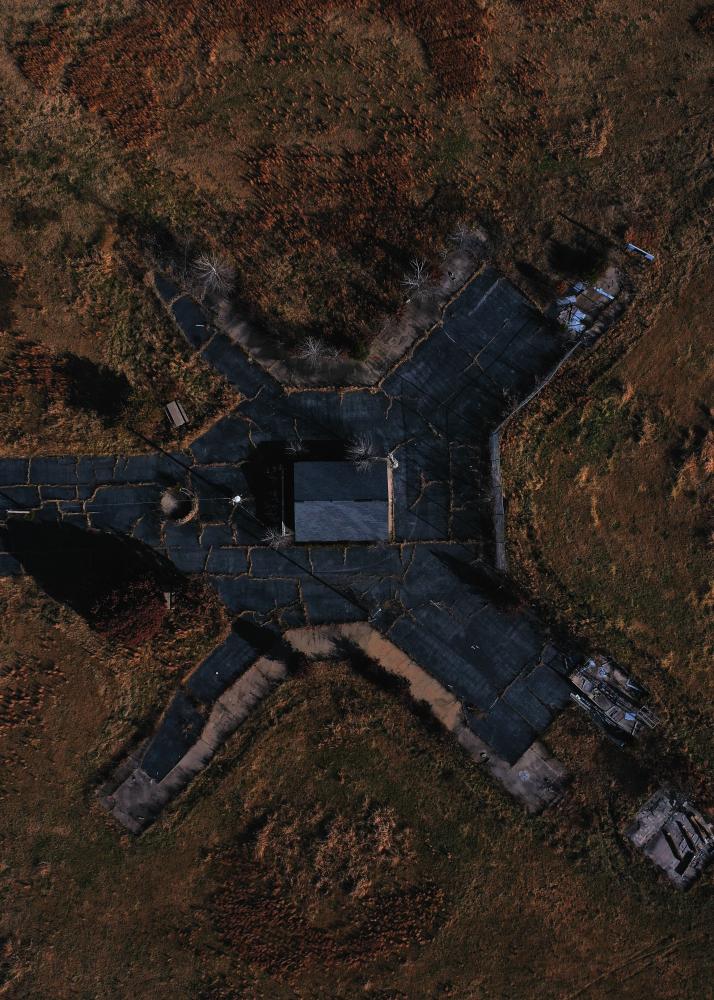 8 of 13 © 2020 Ethan Weston
At one point Picher reportedly had two hospitals and over a dozen bars. At its height the town was home to around 20,000 people. Pictured here is all that remains of the baseball diamond and concession stand near the Picher-Cardin high school. 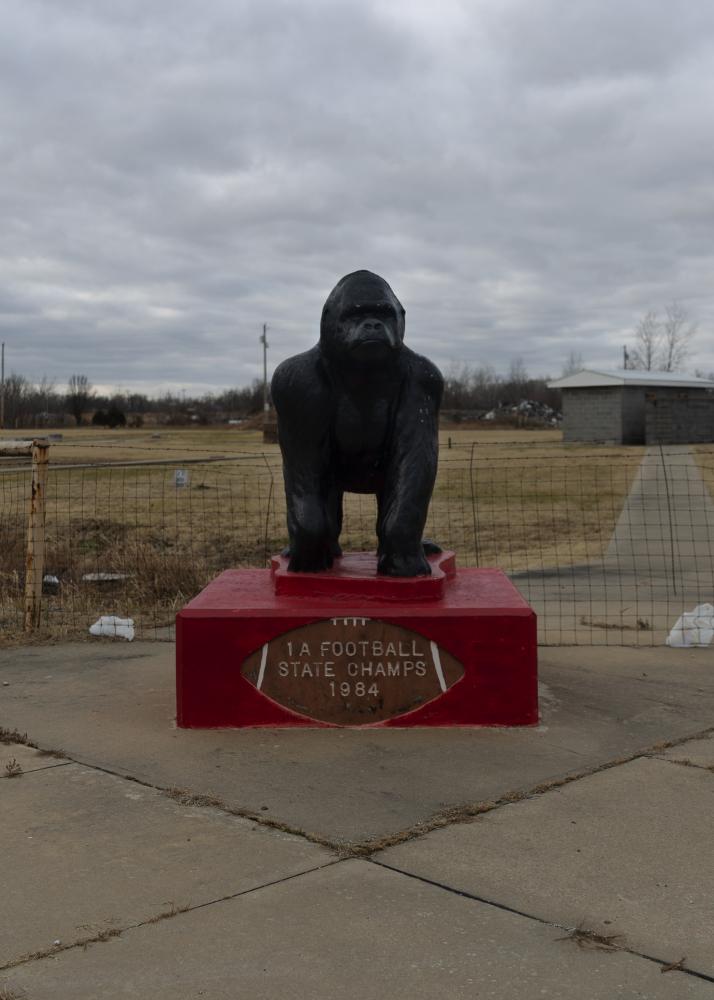 9 of 13 © 2020 Ethan Weston
The gorilla and the high school are still very important to the previous residents of Picher. During the summer they have an all school reunion at the college located not far down the road in Miami, Oklahoma. The organizers of the all school reunion are also working to gather funds for a more permanent monument to the town they so love. 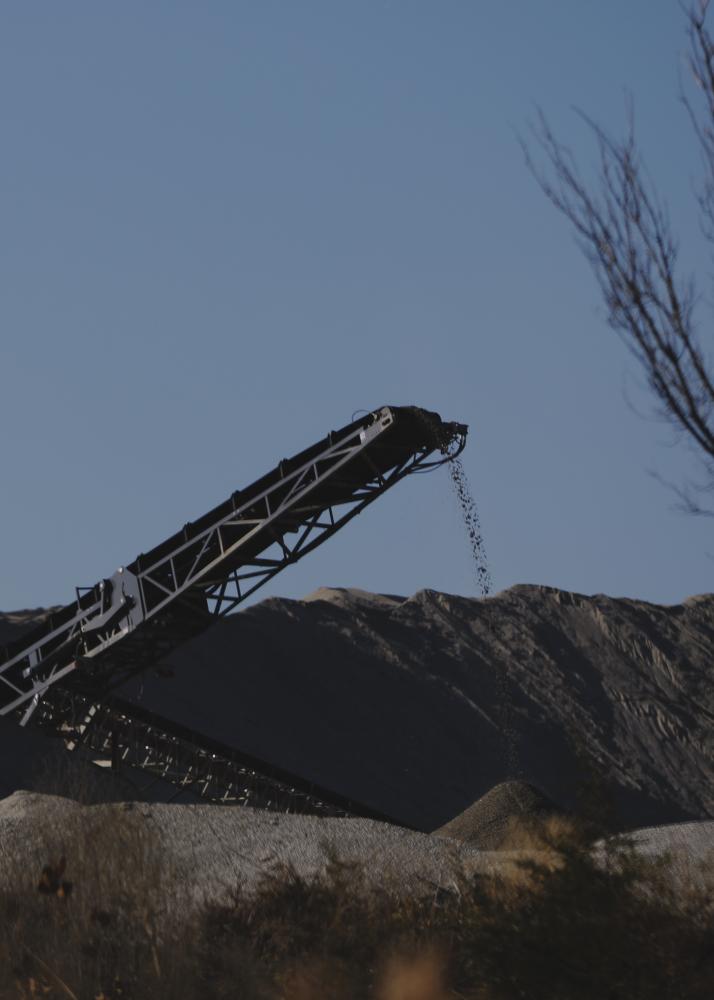 10 of 13 © 2020 Ethan Weston
The old mines still serve as a place of business too. The mines may have shut down nearly 50 years ago but the chat produced by the mines is still used for construction projects — mostly in concrete I'm told. The EPA and the Quapaw (O-gah-pah) used some of the chat to fill back in the old mines. 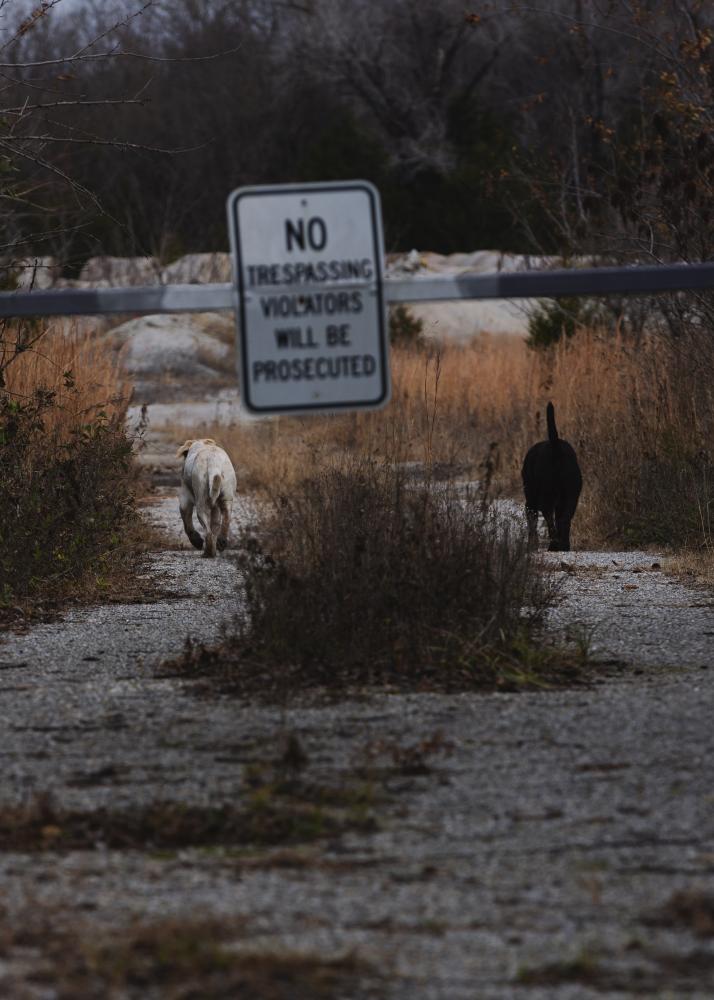 11 of 13 © 2020 Ethan Weston
Two dogs decide to do a heckin' crime and trespass. Even after nearly everyone left town life still continues in some form or fashion. As far as I know these two dogs were strays, neither had a collar on — though both were pretty friendly and didn't look malnourished. I haven't seen them since this encounter. 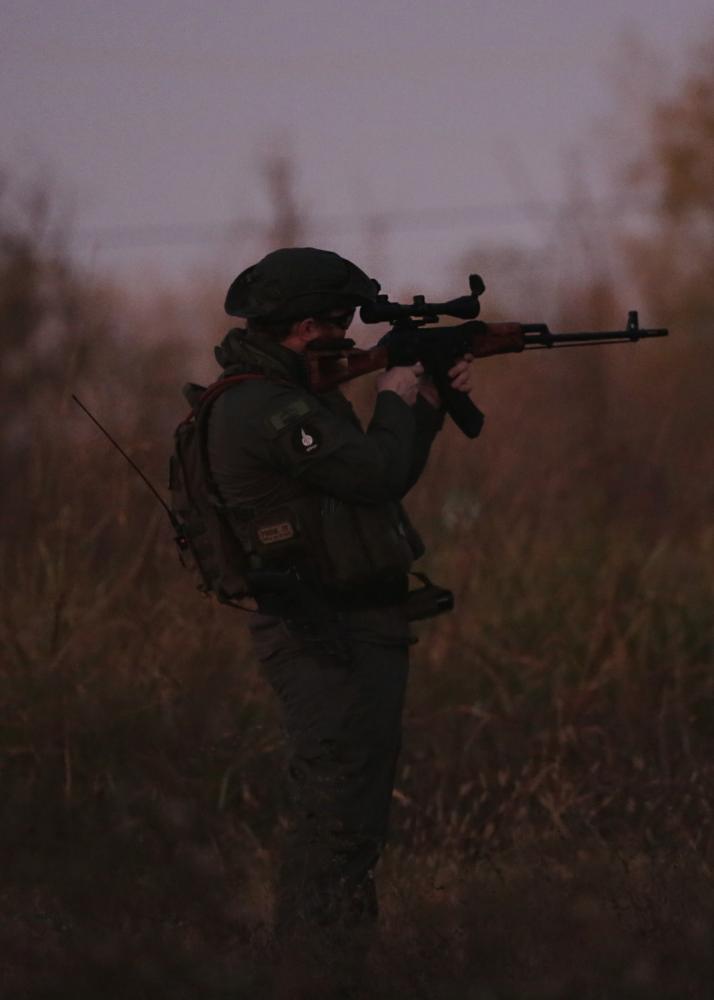 12 of 13 © 2020 Ethan Weston
A war game enthusiast looks down his rifle scope as enemy forces begin to advance towards the “landing strip” where allied soldiers await a plane. When nearly everyone had moved out of Picher and the town unincorporated the land reverted to Quapaw tribal ownership. The tribe rented out the abandoned town to Centurion Combat Simulations for their bi-annual three day war game. Men and women armed with airlift rifles took aim at each other throughout the town as they simulated a war between the fictional country of Copan and the Federacion de Estados Bolivarianos. 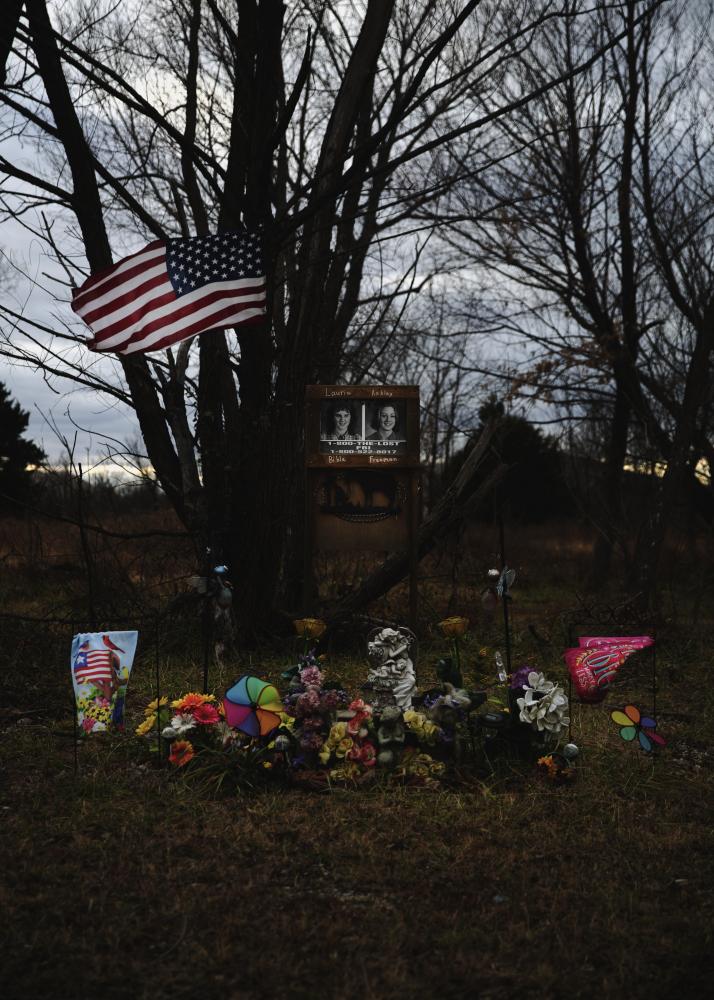 13 of 13 © 2020 Ethan Weston
A shrine to Luaria Bible and Ashley Freeman sits at the site of the house police suspect the two were held at before being murdered. The girls went missing in 1999 and were 16 years old. In April 2018 a man named Ronnie Busick was charged with the murder of the two girls. Two other men are suspected of being involved but are now dead.
Public Story
A Haunting in Oklahoma
Credits: ethan weston
Updated: 10/16/20
Location: Picher, OK
Archived as:  Aerial, Community, Conservation, Documentary, Editorial, Environment, Essays, Landscape, Photography, Photojournalism, Portraiture, Water
Picher, Oklahoma was once a prosperous mining town. At its height it was home to around 20,000 people. The mines closed around 1970 and the population began to take a nosedive from there but it held on until the late 2000s. A study by the Army Corps of engineers which found that a large portion of the town had been undermined and was in danger of collapsing, combined with a major tornado, spelled the end for the town. Now, it's home to less than ten people. In 2009 the town officially ceased functioning and that same year all residents who wanted one were given federal buyouts to leave the town. Four years later the town of Picher was officially dissolved.

“The town was like a family member,” former resident Mitchell Lee said. “If you come back during the summer you’ll see a lot of people just visiting the old places they used to spend time.”

Sheri Mills, a member of the Picher-Cardin All School Reunion Committee, thinks the reason the town’s former residents keep making pilgrimages back is the equality among
everyone.

Callie of the Hunt