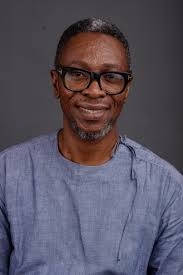 Multidisciplinary Artist + Photographer @ The Nlele Institute is a Pan-African, autonomous and non-profit visual art organization / Based in Lagos, Nigeria

He is a founding member of the Blackbox Collective and Invisible Borders Trans-African Organisation and in 2013, he founded and established The Nlele Institute, where he serves as Director.

He is a two-time winner of the Seydou Keita Prize for photography, and he has also won the Jean-Paul Blachere prize. He currently lives and works in Lagos, Nigeria.

Uche Okpa-Iroha was born on the 2nd of January, 1972 in Enugu, Nigeria. He holds a Bachelor of Technology degree (1997) in Food Engineering from the Federal University of Technology, Owerri, Imo State, Nigeria.

He was spurred to go into photography after visiting an exhibition by the Nigerian collective, the ‘Depth of Field’ (DOF) in London, 2005. His work is inspired by the essence of humanity and the living conditions of his subjects. Most of his portraits can be interpreted as a dialogue between his subjects and their vernacular environment.

Uche won the Seydou Keita Award for the best photography creation at the 8th Bamako Encounters with the “ Under Bridge Life” project and also received the Jean-Paul Blachere prize. Other nominations include the Prix Pictet Award “Growth” in 2010 and the National Geographic All Roads Photography program in 2011. He is a contributor to several publications including “Lagos – the City at work”, “Nigerians behind the lens” and “Unifying Africa”.Uche is an ex-resident, fellow and alumnus of the Rijksakademie van beeldende kunsten, Amsterdam, the Netherlands (2011- 2012). He lives and works in Lagos as a photographer, founder/Director of the new the Nlele Institute.
Sign-up Log In
Cart
Loading...
Edit Check Out