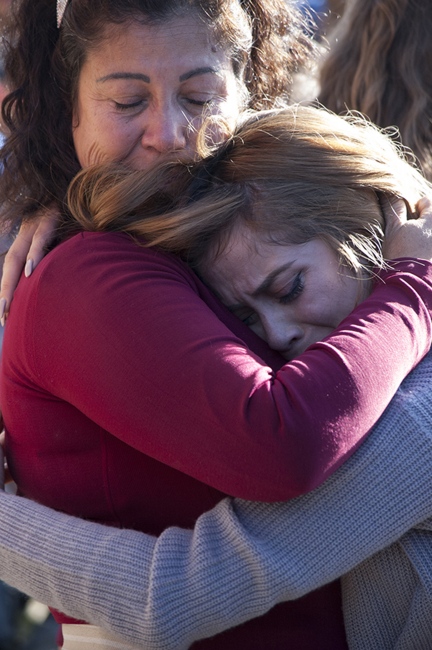 News
NEW BORDER PATROL CHIEF CANCELS DISABLES CHILDREN's EVENT
tish lampert
Feb 7, 2018
RODNEY S SCOTT, NEW BORDER PATROL CHIEF -DO NOT CANCEL AND RESTRICT EVENTS AT FRIENDSHIP PARK, CA
Friendship Park has served as a gateway between the United States/Mexico border for decades. Countless have come to this open parkland to congregate in celebration during holidays, and as well to see loved ones. It is here that monthly get-togethers, and family reunions have been created by Enrique Moronoes and Border Angels.
So it is with great dismay I report that the new border patrol chief, Rodney S. Scott, has suddenly changed hours and love @ Friendship Park. New size limits and rules. No "opening the door of hope" in 2018. No more large families, as 10 people total in new size limit, visits now limited to 30 minutes on Saturdays and Sundays. Reduced space for children to play. Previously approved disabled children’s Telethon hug event canceled.
Enrique commented on this lamentable change : "We shall over come, as Love always conquers hate". This Sunday February 12th, we will have songs of love at Friendship park.
"I have been coming to Friendship Park area since the 1970's when I used to run on the beach, now there is a wall, a reduced friendship park space, more limits on being able to simply love your neighbor. Twenty-five hate mongers allowed to protest at Chicano Park, last Sunday, February fourth. And as of this new ruling, only ten loving family members are allowed to enter Friendship Park this past Saturday. We are outraged, and paying attention. Love, has no borders" Enrique Morones, Border Angels.”
There is an effort to wear down those impacted by deportation, family separations, the threat of being deported. With the new head of border patrol we are witnessing efforts to restrict and cancel expected events that have been enjoyed by all who come to Friendship Park. I ask are we going to sit back and allow these restrictions and cancellations to roll out without our voices heard? California is a sanctuary state. The majority of Californians have already made it clear that we do not approve of the deportation, exclusion and ridicule of those who are simply trying to make a decent life for themselves and their families.
Consider how the events at Friendship Park have affected us, in the past. Below is a section of what I wrote after having the privilege of photographing families who were allowed just ‘three minutes’ to reunite:
For the sixth time in history, on November 18th, the 'Door of Hope' was opened at the U.S./Mexican
border, to allow eleven families who have been separated by deportation, to re-unite. Three minutes was all
the time allowed. In these few minutes, wives, husbands, brothers, sisters, along with their young children,
stood at the intersection of Mexico and the United States and clung on to each other with desperation while
feeling that touch, that connection, along with the pain from their time apart. These intimate moments
occurred in front of a crowd of spectators and border patrol. I admit it felt as if we were intruding. As I
witnessed and photographed each of these twelve families, I was mindful of what it means to document
these reunions, at the expense of exploiting these families’ misfortune. Yet for each of those who had
waited years for this chance to see their loved one, their longing and excitement displaced the awkwardness of being on display. If you have three minutes to bask in the love and remembrance of your partner, or yourmother, or your child, the outside world is a blur. Something happened to all of us in this crowd. We were united by these families’ love and longing. We cried. We were humbled by their grace. We were uplifted by their joy, watching young children meet a grand parent or an uncle for the first time. Sisters who could just hold onto to each other for the entire three minutes and then had to be torn apart again when their time was up. The brothers, who at first were sensitive to being watched, quickly moved in to huddle with the entire family. But it was in the eyes of the children that we could see a deep confusion. A child does not understand why their family suffers. Their questioning looks said it all. The circumstances that have broken these families apart feel very wrong.
The visitations were carefully choreographed. Families stood in line until it was their turn. Then they were
escorted, by border patrol, to walk fifty feet to the door of hope, where their loved one was waiting in
anticipation. From the instant they made contact there was not a sound in the crowd. We all lost that sense
of being strangers. Even border patrol was sensitive to the emotional mood.
Friendship Park has been a place of joy, comfort, and love to the countless who have journeyed there to feel the warmth of their full community. It is where we attend the occasions created by Border Angels. But now with the new border patrol chief revising the rules, it is incumbent on us to speak out against these new restrictions. Officer Rodney S Scott we respectfully request that you pay attention to your community and do not restrict the change of hours, size limits and regular events that have brought people together for years, at this beloved location at the U.S./Mexican border.
Tish Lampert
www.tishlampert.org

By Tish Lampert — WONDERFUL ARTICLE ON MY WORK/ MY BOOK, WE PROTEST! WE PROTEST - PROVOKR Fists raised skyward, tears..
Jul 13, 2020

Join Us Today : The Importance of the Printed Image, the intricate mosaic of activism in the US since the dawn of the 21 st century

By Tish Lampert — SIGN UP for this informative discussion. Documenting history - the power of the printed image - twenty years..
Jun 22, 2020

By Tish Lampert — Thank you Dennis Bernstein for a compelling interview ..
May 12, 2020

Tish Lampert is on KPFA on Thurs eve 8:30 East Coast with Dennis Bernstein On Flashpoints News

By Tish Lampert — Everyone please join me on Dennis Bernstein's show Flashpoints News , i will be discussing my book A..
May 4, 2020

We Protest Fighting For What We Believe In

By Tish Lampert — Tish Lampert, with David Shipler, discusses We Protest: Fighting for What We Believe In | Book Soup Tish..
Apr 20, 2020

City of Angles Under Isolation

If You Are Sick Do Not Enter

By Tish Lampert — This is the sign outside one of Los Angeles's central hospitals
Mar 27, 2020

You Will Never Be Forgotten

By Tish Lampert — WE PROTEST:FIGHTING FOR WHAT WE BELIEVE IN on Vimeo Join the webâs most supportive community of..
Mar 25, 2020

WE PROTEST FIGHTING FOR WHAT WE BELIEVE IN

WE PROTEST FIGHTING FOR WHAT WE BELIEVE IN

By Tish Lampert — EXAMINING THE JOURNEY, THE WAITING IN SHELTERS AND FOR MANY THE DENIAL OF ENTRY... AND WHAT COMES NEXT
Jan 14, 2020

By Tish Lampert — The Children Now In Limbo In Tijuana by Tish Lampert via Visura What has happened to the migrant children..
Oct 29, 2019

We Protest Fighting For What We Beleive In

By Tish Lampert — I WAS SO PROUD TO BE FEATURED ON INDY MEDIA < CHRIS BURNETT’S WEEKLY PROGRAM ON KPFK : PLEASE CLICK..
Jan 16, 2019

Welcome To The United States

We've Got Your Back

By Tish Lampert — The crowd shouting to those detained inside LA Detention center
Jul 2, 2018