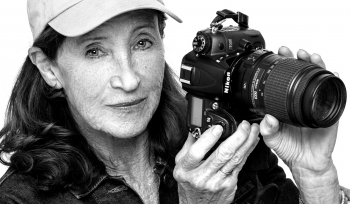 Photographer @ United Nations and freelance / Based in Los Angeles

Photojournalist, Writer & Host of the podcast “America Speaks”
Author:We Protest: Fighting For What We Believe In, Rizzoli Books

Originally from New York City, Tish Lampert began her work as a photojournalist in London where she free-lanced for numerous publications and newspapers, including The London Times, The Evening Standard, and Time Out Magazine. She distinguished herself as one of the only women who photographed inside the mines at Abergavenny, Wales. Lampert’s work focuses on human rights issues. She worked with the Cesar Chavez movement for migrant worker’s rights in the nineties and for ten years, worked with the Navajo Nation in Tuba City and Window Rock, Arizona. Her “in the field” investigations include: Human Rights Watch, The Fund For Peace, Concierge, Voices For a Free South Africa, The Africa Project, The Los Angeles School District, Tap-Tap, The Los Angeles Conservancy and US Doctors Without Borders. Art Miles Mural Project uses Lampert’s images to represent them internationally. In 1994, Lampert was hired to document the Soldier of Fortune convention at the Sands Hotel, in Las Vegas. That assignment provided a rare opportunity to photograph mercenaries, and future war profiteers.
For five years she served as media director and photographer for Voices of African Mothers, an accredited NGO at the United Nations. Lampert has served as the senior documentarian, for CAP (Conflict Awareness Program). Her photographs from the Congo have been exhibited at UCLA, Laguna Beach, Malibu and New York. In 2010 Lampert had a solo exhibition of her photographs of the Lowland Gorilla in Laguna, California.Tish ‘s work for the United Nations, has taken her to rebel held territory, in the Congo, as well as to Ghana, Kenya, Burundi, and Rwanda. She was the photographer of record for investigations involving rebel soldiers on Igwi Island, in the DRC. Her exhibitions of the Congolese Lowland Gorilla have raised awareness for this endangered species.
The World Federation of the United Nations Association brought Lampert to New York to photograph Secretary General Ban Ki - moon, Under Secretary General Anwarul Chowdhury and Hans Blix. The United Nations Association honored Lampert for her achievement as a photojournalist in Sub-Sahara.In March, 2013, Under-Secretary General, Michelle Bachelet, commended Lampert for her work with women, in the Congo at the United Nations.
Ms. Lampert is a 2013 and 2019 recipient of a Nathan Cummings Family Foundation Grant for her twenty years of chronicling U.S. citizens exercising their First Amendment Rights. In June 2013, Ms. Lampert exhibited images from this collection at the United Nations. In 2015 and 2016, NCORE, (National Conference On Racial Ethnicity), used Lampert’s images at their national conference, in Washington D.C., and in San Francisco. Lampert’s work was featured at PHOTO LA, 2016, and in 2019. On January 4th, 2018 Lampert was apart of a group exhibition: Getty: LA/LA Ephiphany  https://www.latimes.com/entertainment/arts/la-ca-cm-protest-art-epiphany-20180121-htmlstory.html
Lampert’s work has been spotlighted at Dying To Tell The Story in recognition of UN World Press Freedom Day, May 2018. The American Society for Media Photographers LA, Sept 15th, at Cannon Camera headquarters, 2018. Her photos are also featured at Photo LA, 2016, 2019, at A&I. January 2018 The Art of Protest at the Church of the Epiphany in Los Angeles. In February, 2020 Lampert’s work from the U.S./Mexican border, exhibited at the Jose Drudis-Biada Gallery, at Mount Saint Mary’s University.
In 2020 Rizzoli Books  published Lampert’s book: We Protest, Fighting For What We Believe In. The book is endorsed by Vice president Kamala Harris, Secretary of the Interior Deb Haaland, Harry Belafonte, Martin Sheen, Howard Gordon, Pulitzer Prize author and NY Times journalist David Shipler, to name a few.April 2020 Lampert exhibited at Fotografiska in New York, presenting images from her book We Protest Fighting For What We Believe In
America Speaks Podcast is the companion series to Lampert’s photographic book and select shows can be heard on Apple Podcasts and numerous platforms. https://itunes.apple.com/us/podcast/america-speaks-podcast/id1364281632, http://americaspeakspodcast.libsyn.com
A list of Lampert ‘s speaking engagements are available upon request. Some of her recent talks include: a symposium at the United Nations, Photo LA, in Los Angeles, Dying To tell The Story, Malibu, Ca., Canon Headquarters Burbank CA, ,September 2018, World Oregon, 2020, Biden/Harris campaign USA.
Lampert sits on the Creative Council Board for The Peace Studio: https://thepeacestudio.org/creativecouncil/
Ms. Lampert’s photographs are apart of numerous private collections both corporate and individual. A list of her writing is available upon request, as is a forthcoming exhibition schedule.
websites : https://www.tishlampert.org/   https://visura.co/tishlampert3
Cart
Loading...
Edit Check Out