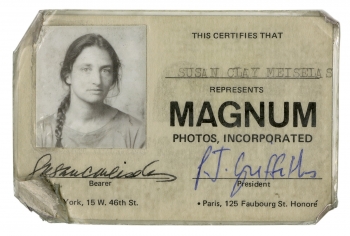 Meiselas joined Magnum Photos in 1976 and has worked as a freelance photographer since then. She is best known for her coverage of the insurrection in Nicaragua and her extensive documentation of human rights issues in Latin America.

Meiselas served as an editor and contributor to the book El Salvador: The Work of Thirty Photographers (1983) and edited Chile from Within (1991) featuring work by photographers living under the Pinochet regime, as well as an updated ebook on the 40th anniversary of the Chilean coup (2013). She has co-directed three films, Living at Risk: The Story of a Nicaraguan Family (1986); Pictures from a Revolution (1991) with Richard P. Rogers and Alfred Guzzetti where she searches for the people in her photographs ten years after they were taken and Re-framing History (2004) where she returns to Nicaragua again with 19 murals to place them in the landscape where they were first made to again interrogate the history they represent on the 25th anniversary of the Revolution.

In 1997, she completed a six-year project curating a hundred-year photographic history of Kurdistan, integrating her own work into the book Kurdistan: In the Shadow of History (1997) along with the pioneering website akaKURDISTAN (1998), an online archive of collective memory and cultural exchange.

Her 2001 monograph Pandora’s Box (2001) which explores a New York S & M club, has been exhibited both at home and abroad. The 2003 book and exhibition Encounters with the Dani documents a sixty-year history of outsiders’ discovery and interactions with the Dani, an indigenous people of the highlands of Papua in Indonesia. Her retrospective book and recent exhibition In History (2008) was produced with the International Center for Photography, New York and Steidl.

Her most recent project A Room Of Their Own (2015-2016) explores the experiences of women in a refuge in the Black Country UK. Commissioned by UK based arts organization Multistory, Meiselas led a series of workshops with women in refuge to create visual narrative combining photographs, first-hand testimonies, and original artwork. A Room Of Their Own was published by Multistory in 2017.

Meiselas has had one-woman exhibitions in Paris, Madrid, Amsterdam, London, Los Angeles, Chicago, and New York, and her work is included in collections around the world. She has received the Robert Capa Gold Medal for her work in Nicaragua (1979); the Leica Award for Excellence (1982); the Engelhard Award from the Institute of Contemporary Art (1985); the Hasselblad Foundation Photography prize (1994); the Cornell Capa Infinity Award (2005); the Harvard Arts Medal (2011) and most recently was awarded a Guggenheim Fellowship (2015). In 1992, she was named a MacArthur Fellow. Meiselas has served as President of the Magnum Foundation since its founding in 2007. Mediations, a survey exhibition of her work from the 1970s to present was recently exhibited at the Fundació Antoni Tàpies, Jeu de Paume, and the San Francisco Museum of Modern Art.