Writer, Photographer, Filmmaker
keithrutowski.com
Endurance of the Spirit
Follow Hire
Profile
Stories (5)
News (1)
Location: Milwaukee, WI
Biography: I'm a writer, photographer, and filmmaker.
Focus: Photographer, Writer, Researcher, Fine Art, History, Documentary, Culture
During the late 1800s and early 1900s, workers and their families migrated to the banks of the Ohio River in the Appalachian foothills in search of opportunities to forge better lives for themselves. Many of them settled in or near the city of Wheeling, West Virginia, where they labored in the area’s bustling coal mines, iron works, steel mills, tool shops, glass companies, breweries, and cigar factories. Although the conditions were often challenging, they managed over time to carve out an existence here. The city hummed then with the sounds of industrial creation.

This is the Wheeling that frequently occupies the thoughts of 78-year-old Ed Gorczyca and his contemporaries—the Wheeling they say their forbears had doggedly built into a thriving city before the decline took hold of it. Over the course of Gorczyca’s life, the surrounding Upper Ohio Valley's manufacturing industry collapsed, fueling a steady exodus of working-age people and the city’s deterioration. Wheeling's population fell from its peak of 61,659 residents in 1930 to fewer than 28,000 in 2015. Given that viable full-time job opportunities currently remain in relatively short supply, demographers predict that it will be difficult to stop the slide.

However, small signs of renewal are perhaps more visible in Wheeling today than they have been in years. Long-time residents and newcomers have founded city partnerships and grassroots organizations to strengthen the city physically, economically, and spiritually. They’re striving to preserve and promote its history, grow healthy food in what has long been considered a food desert, and create community for those people who have been neglected and marginalized. A collective reassessment of the city's identity is taking place, yielding both eulogies for what is missing and hope for what might be restored or invented.

What calls to people in Wheeling today? Is it the song of dusk enveloping the grand old bridge? Is it the warm theater where Frankenstein used to appear glowing on celluloid at the midnight show? It could indeed be something already lost to time, that elusive specter of the now vacant department store's holiday model trains making their rounds or some other loved thing that may somehow return to town. Or it could be the stubborn sense of promise that was held between these hills for someone's parents, the promise that built this city and survived a precipitous fall, a promise that says you could write the next chapter of Wheeling's story. 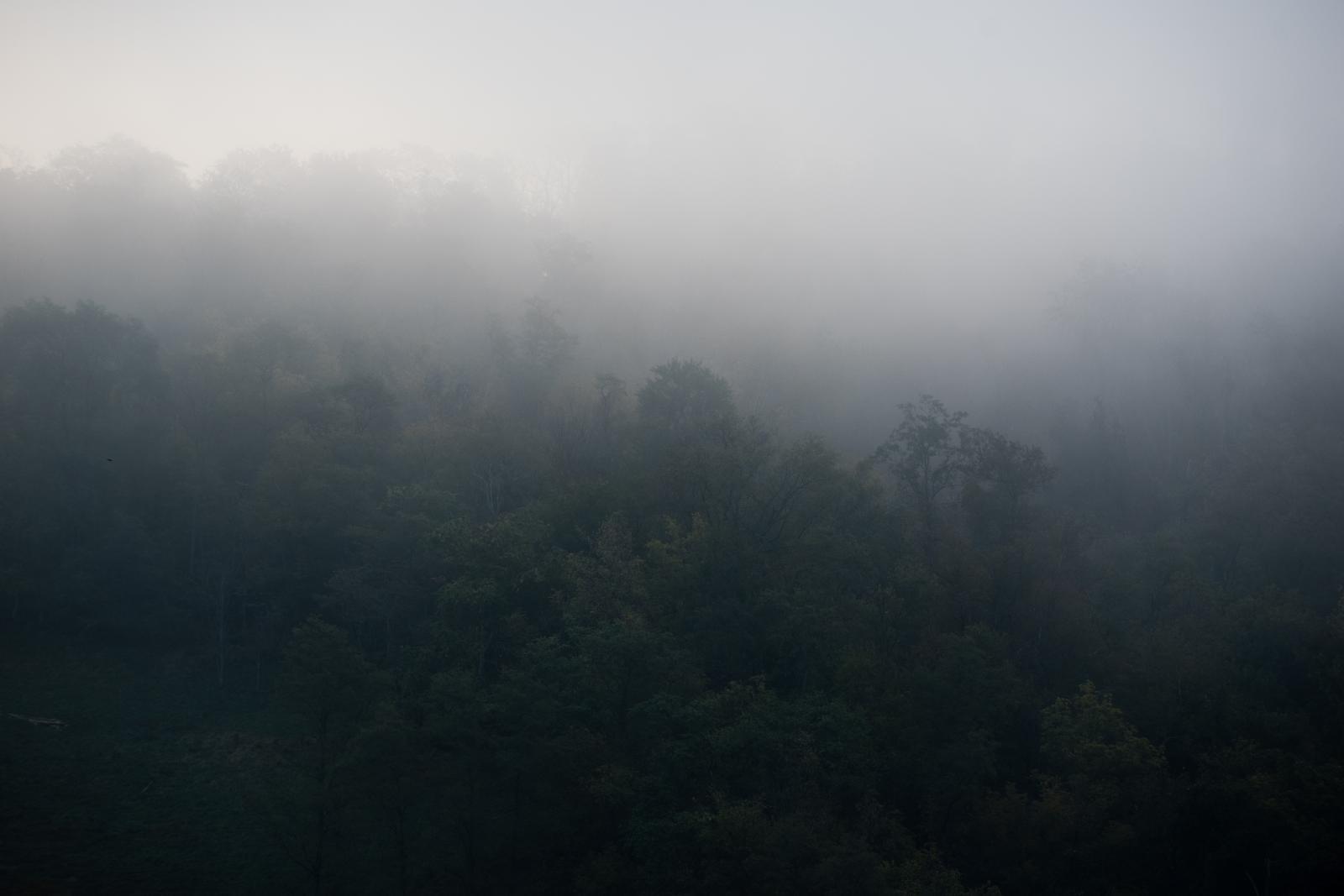 1 of 16 © 2023 Keith Rutowski
The fog-wreathed hills of the unglaciated Allegheny Plateau surround the city of Wheeling, West Virginia. The state's terrain once proved to be a formidable obstacle but ingenuity and grit eventually brought the National Road and B&O Railroad across the hills to the city in 1818 and 1853, respectively. This, combined with its location along the Ohio River, created the foundation for Wheeling's development into an important industrial center and transportation hub for westward expansion. 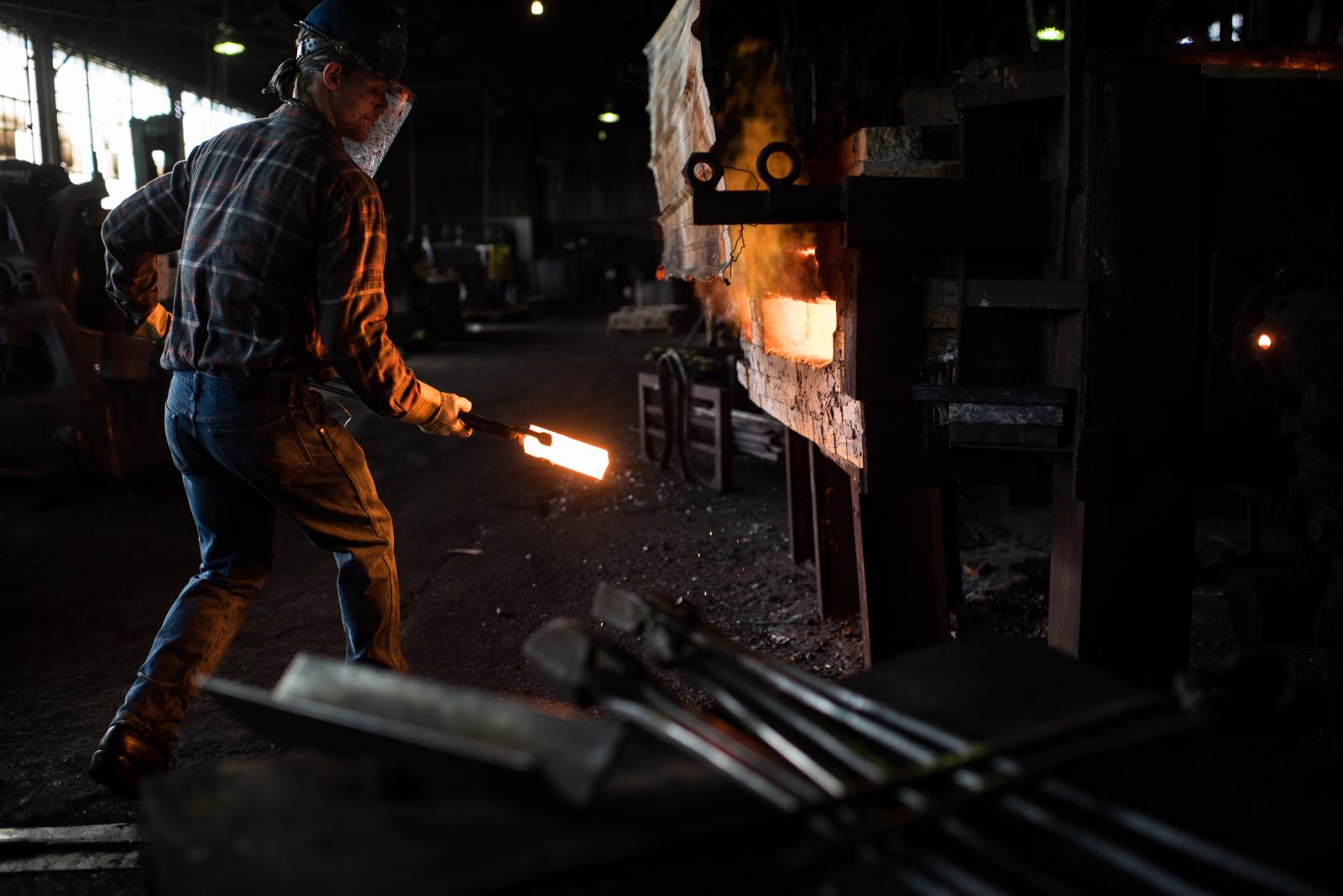 2 of 16 © 2023 Keith Rutowski
At the Warwood Tool Company, William Davenport’s movements appear as a hypnotic dance in the face of the billowing heat of the slot furnace. He pulls a steel billet from a stack, swings toward the waiting furnace and deposits it. Seconds later, after gauging the color—now white like some celestial object—he clenches and delivers it to the forging stage. The company—which was founded in 1854 and supplies tools to the railroad, mining and construction industries—is one of Wheeling's few remaining functioning remnants of its significant 19th-century industrial age. Competition from cheaper foreign-made products and the contraction of the steel industry has placed pressure on the company. 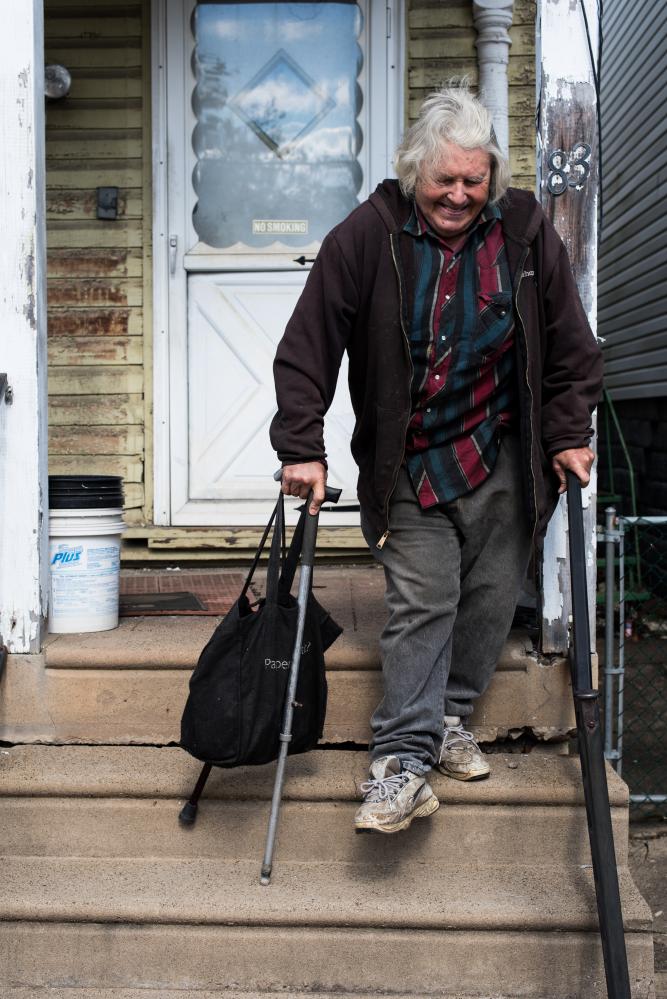 3 of 16 © 2023 Keith Rutowski
John Lapinsky, a former Wheeling-area machinist, bears the pain of arthritis to descend his front stairs on Wheeling Island. Lapinsky remembers when the Ohio Valley's manufacturing base was stronger. "I retired a couple of years before it all started happening around here. I was lucky," he says. 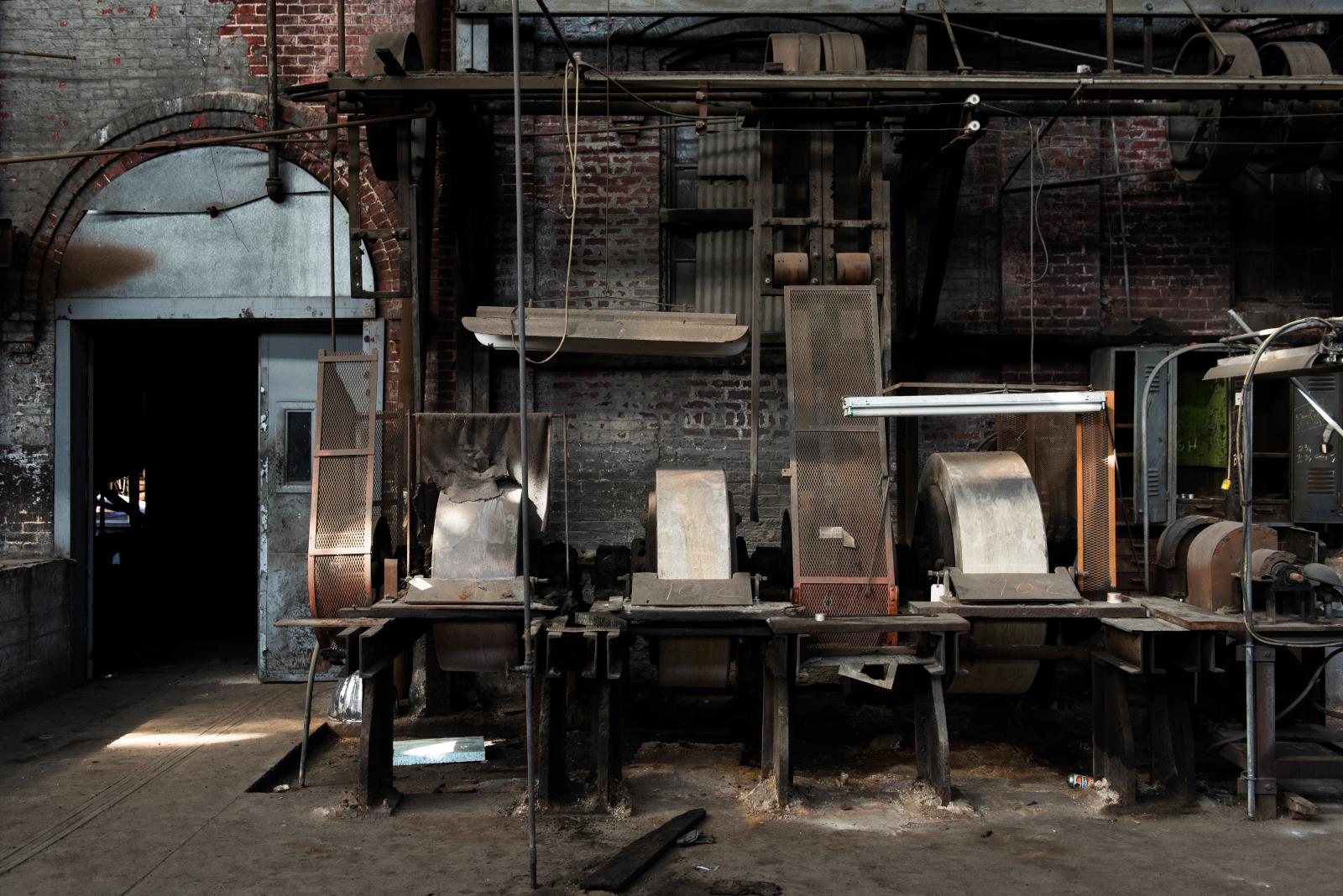 4 of 16 © 2023 Keith Rutowski
Equipment that was auctioned off after the closure of the La Belle Cut Nail Plant waits to be claimed. In the 19th century, Wheeling was known as "Nail City" and was the nail-producing capital of the world. 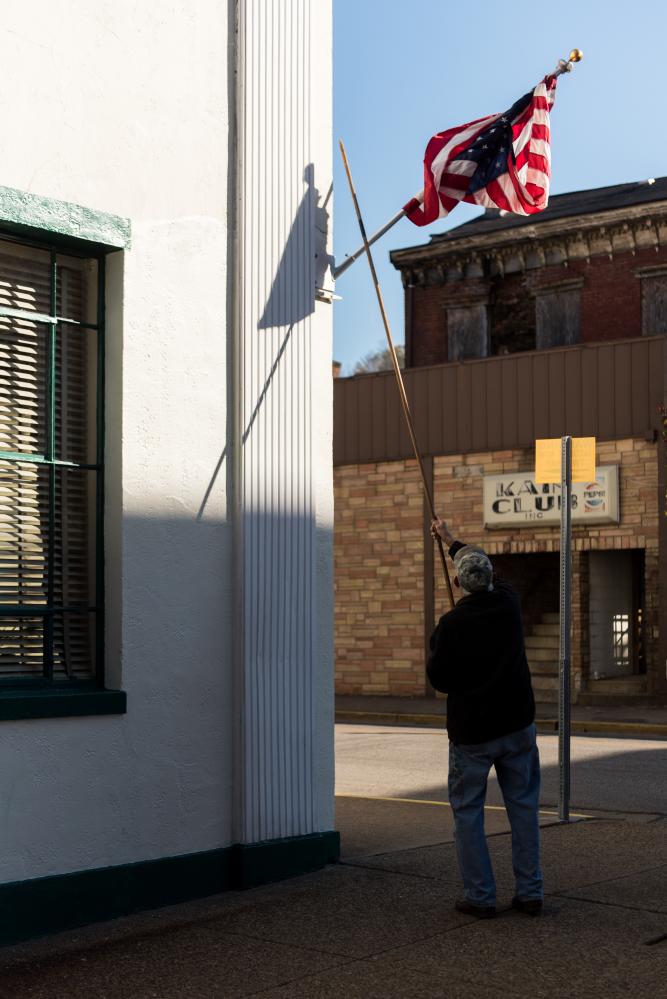 5 of 16 © 2023 Keith Rutowski
Mel Joseph, a lifelong Wheeling resident, attempts to straighten out a tangled American flag outside of Kepner Funeral Home in South Wheeling. Joseph and his friend Bob Carl, also a lifelong resident, perform general maintenance for the chain of funeral homes, one of the few old family-owned businesses that still exists in Wheeling. 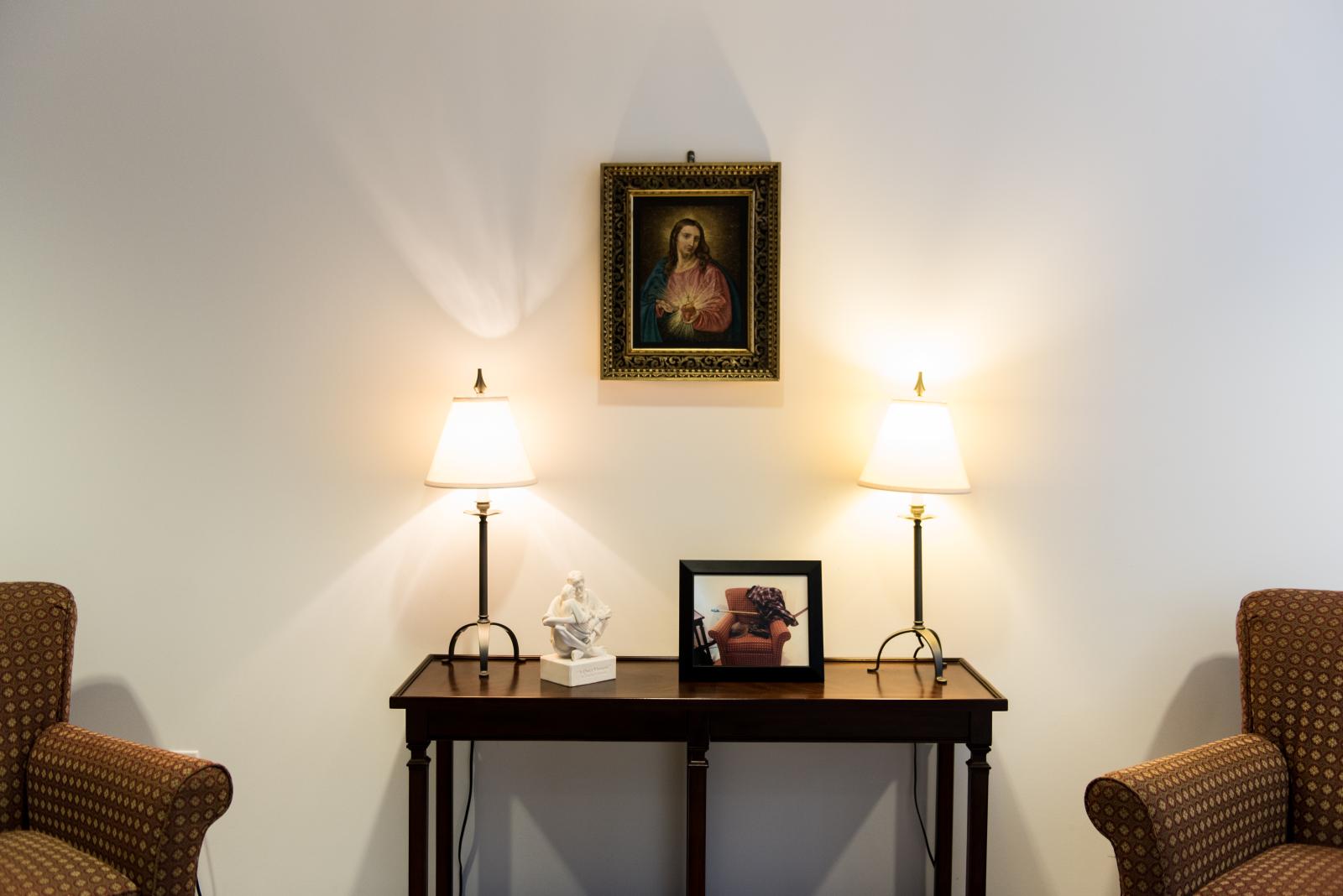 6 of 16 © 2023 Keith Rutowski
In the lobby of St. Alphonsus church in Wheeling, a picture of Jesus Christ hangs above a photograph of the empty seat adjacent to it where the church's long-time sacristan, Charlie Saad, often sat before he passed away. Over the past few decades, several of the Wheeling area's Catholic churches have closed due to a decline in attendance. 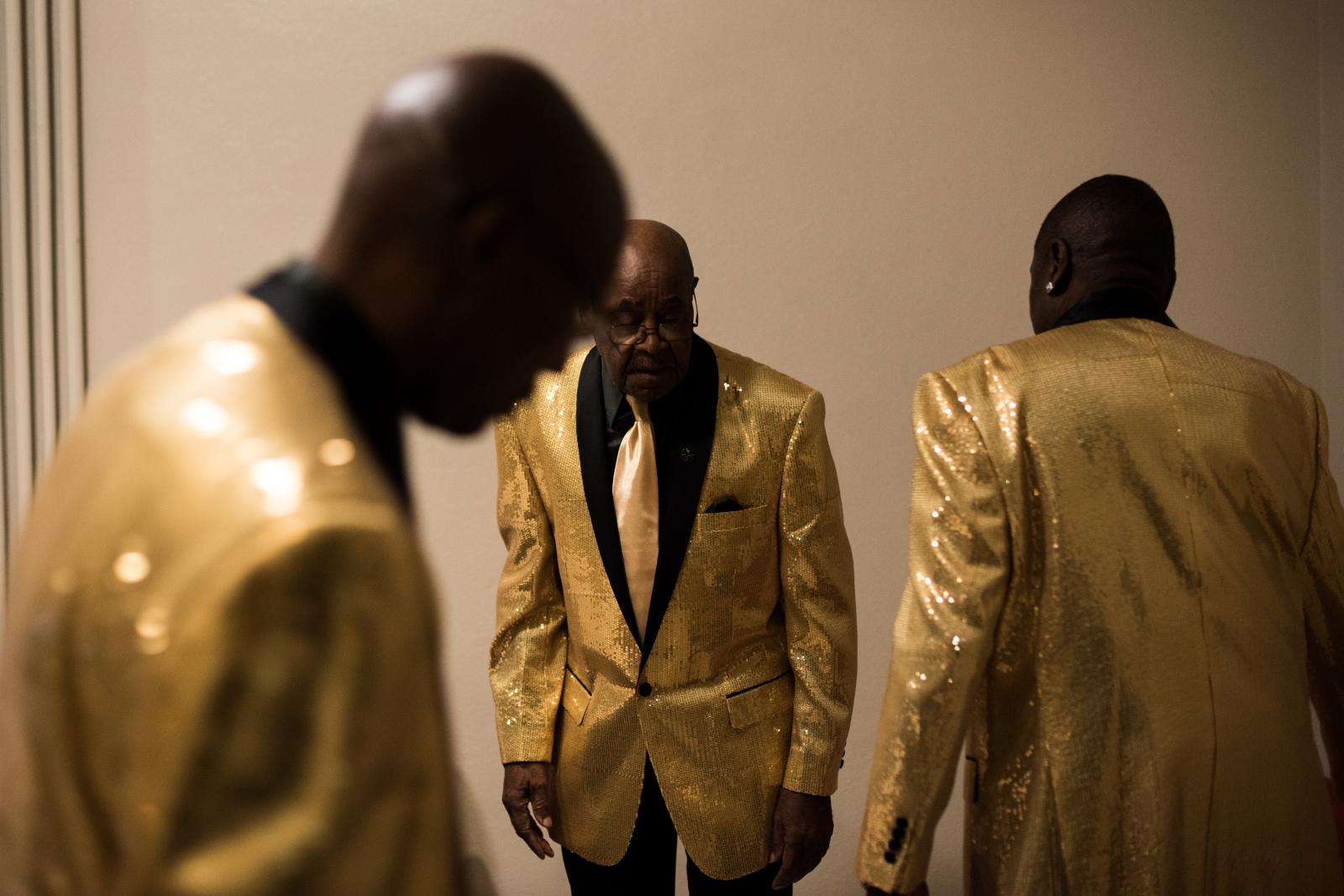 7 of 16 © 2023 Keith Rutowski
Members of Harold Winley and the Clovers begin gathering together backstage at Wheeling's historic Capitol Theatre before their performance during a rock n' roll and doo-wop concert. 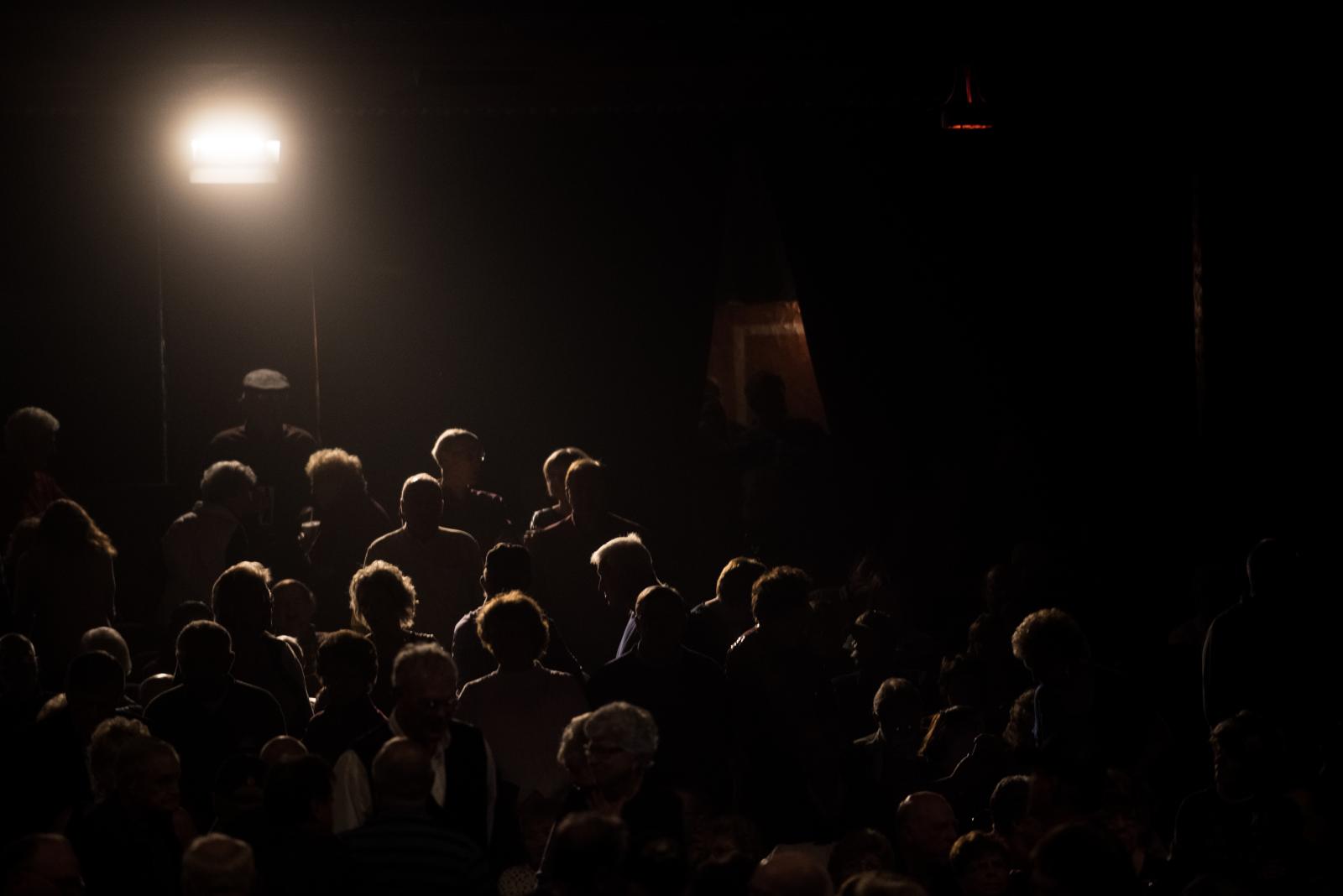 8 of 16 © 2023 Keith Rutowski
A crowd mills about at the Capitol Theater. The venue, which was built in 1928 and has hosted Jamboree USA and the Wheeling Symphony Orchestra, is on the National Register of Historic Places. It was reopened in 2009 after being closed for two years for renovations. 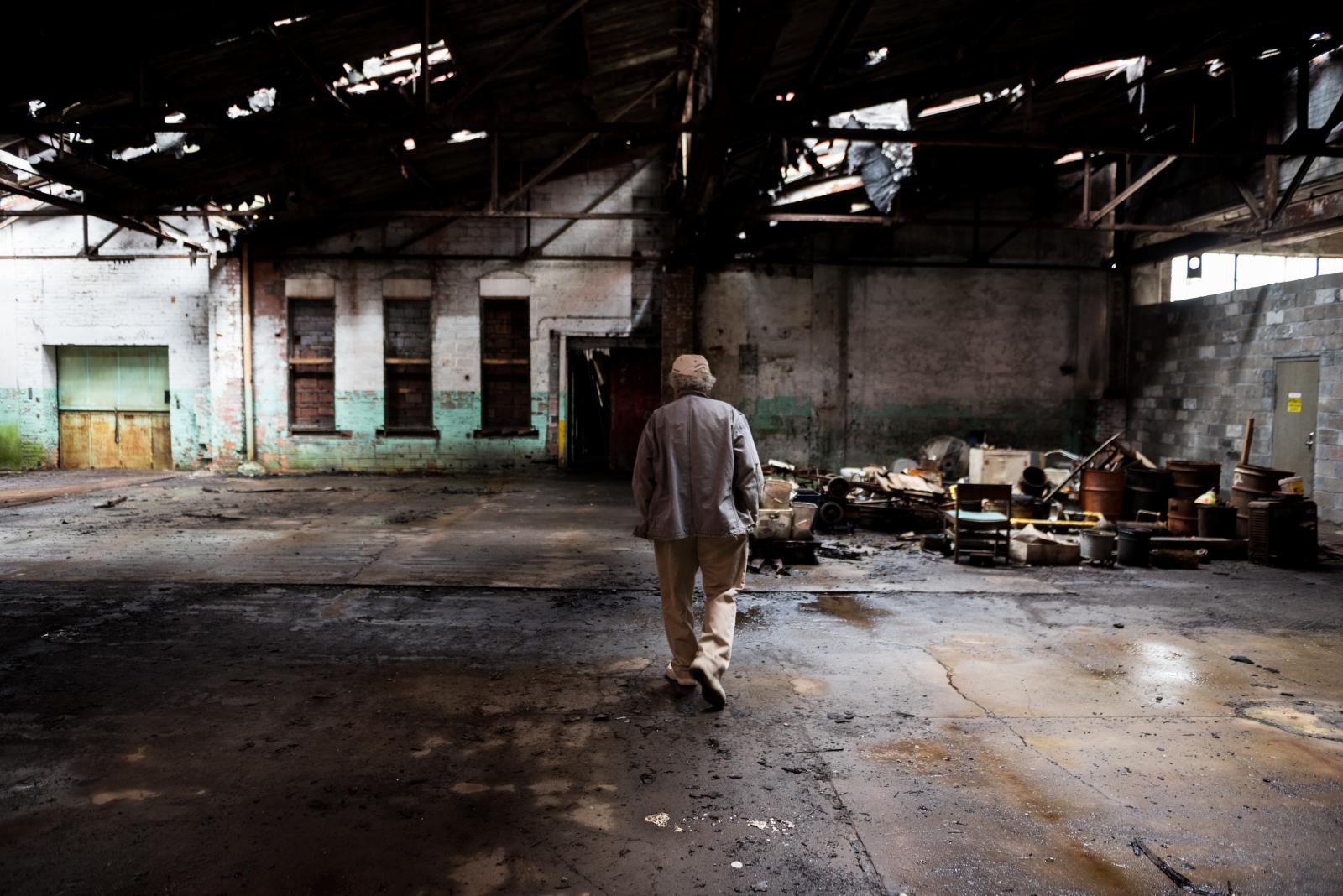 9 of 16 © 2023 Keith Rutowski
The current owner of the building that once housed the defunct Hazel-Atlas Glass Company walks through one of its many cavernous rooms. Hazel-Atlas Glass was one of the largest producers of glass containers in the United States. There are now discussions of demolishing sections of the complex and redeveloping the land. 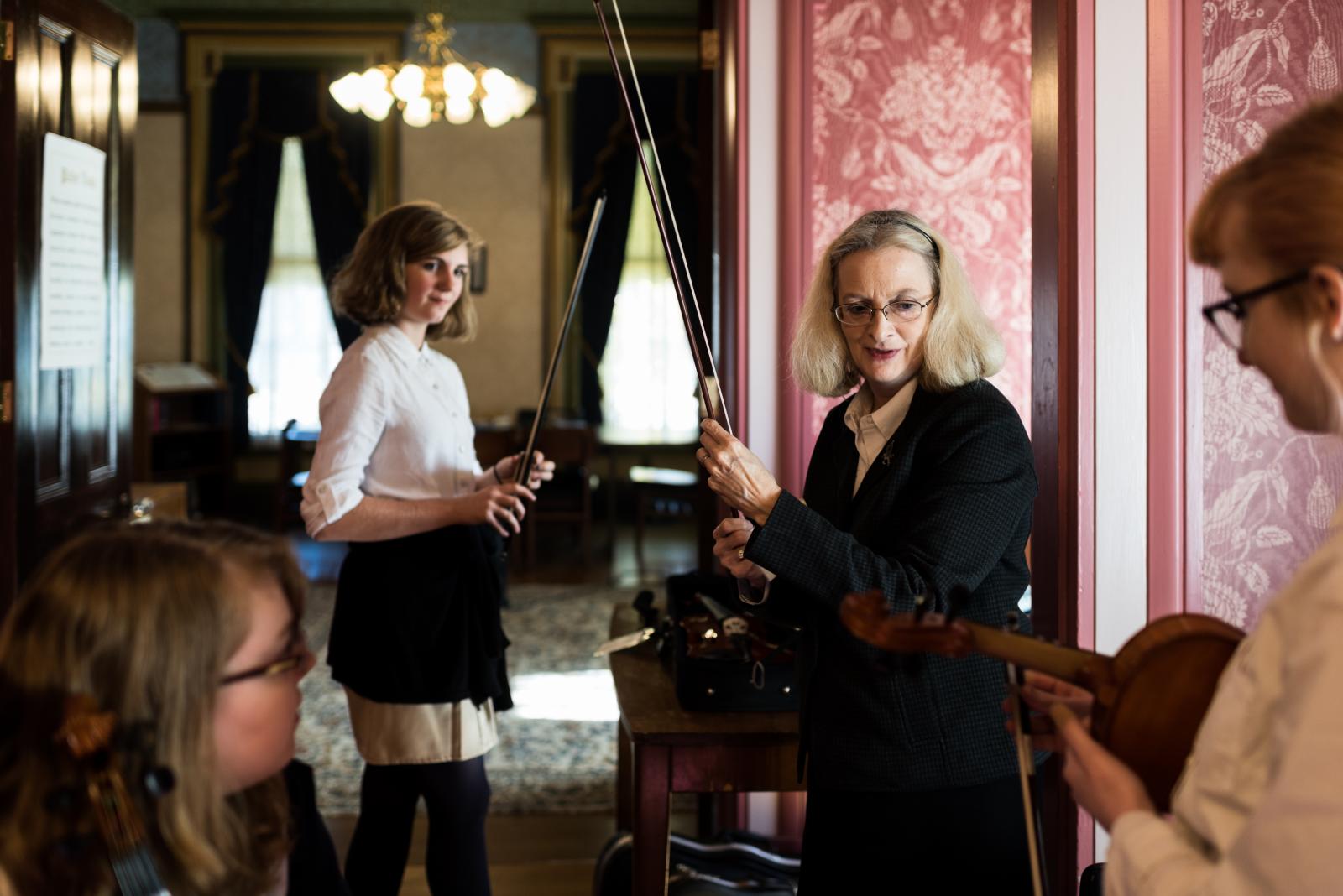 10 of 16 © 2023 Keith Rutowski
Andrea Spain, Gabrielle Marshall, Emma Guy—three of the four high school students currently enrolled in Wheeling's Lyceum Preparatory Academy—absorb a lesson from headmaster Judith Jones-Hayes. In spirit, Lyceum is a reincarnation of the city's prestigious Mount de Chantal Visitation Academy, which closed its doors in 2008 after operating for more than 140 years. Lyceum is located in a mansion originally occupied by an early Wheeling merchant, and it features a curriculum that covers standard academic subjects, as well as rowing, fencing, Latin and violin. 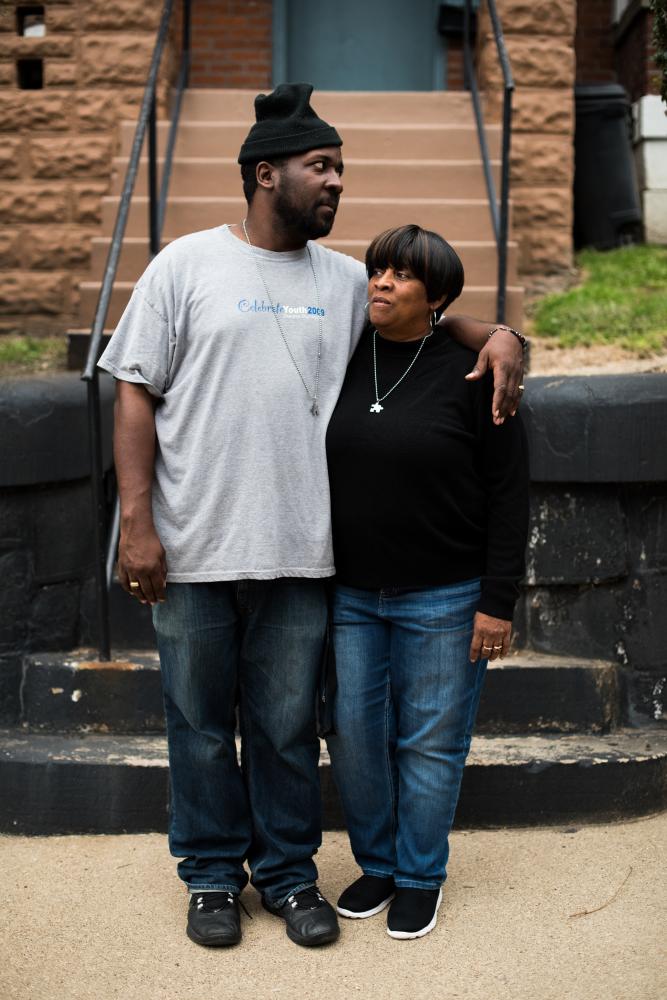 11 of 16 © 2023 Keith Rutowski
Ron Scott, Jr., a counselor for at-risk youth and a third-generation Wheeling resident, and his mother, Linda Scott, a nurse, pose for a portrait outside of Linda's home in East Wheeling. 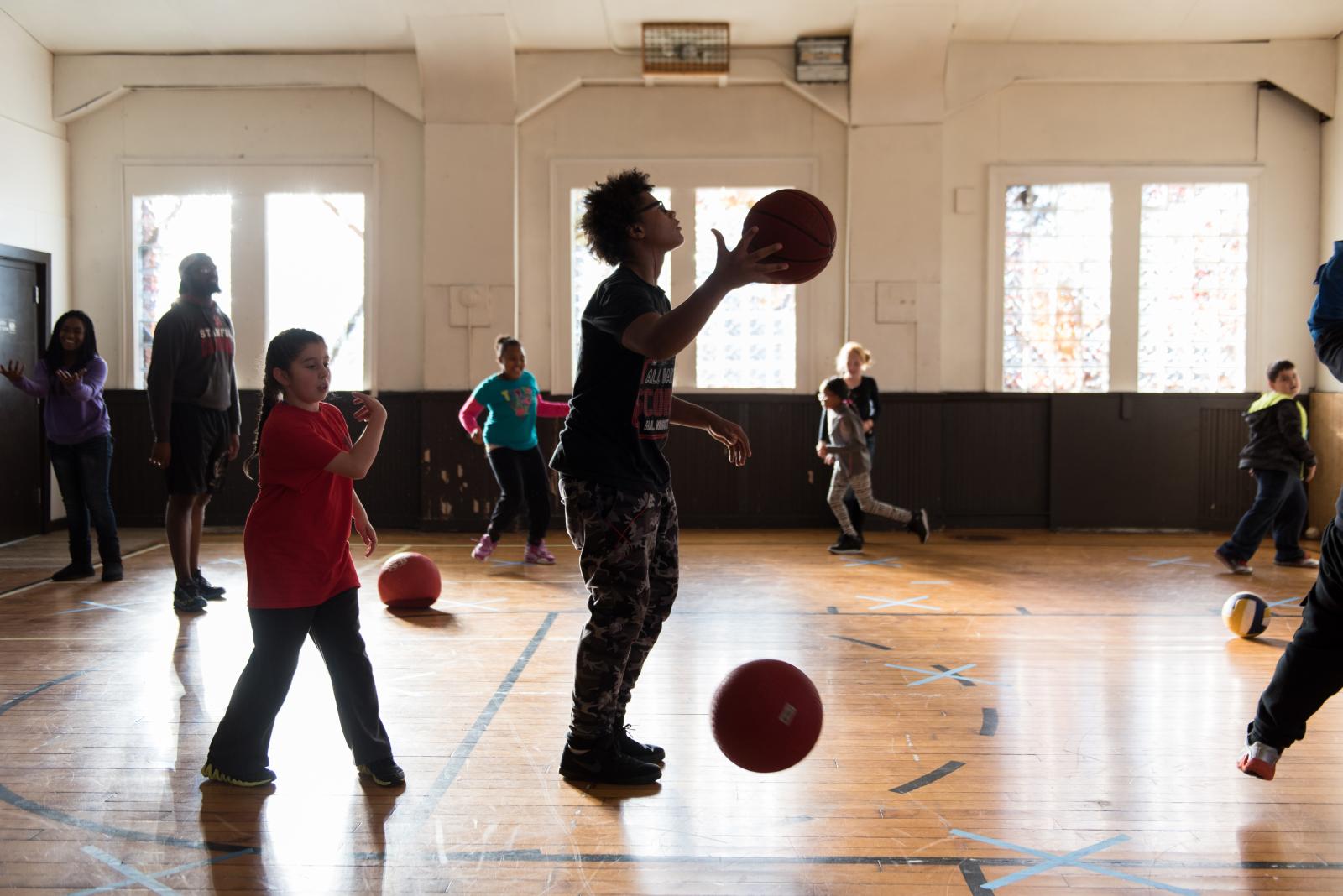 12 of 16 © 2023 Keith Rutowski
The small gymnasium of East Wheeling's Laughlin Memorial Chapel brims with life during a free-time period at an after-school program for the city's middle and high school students. "I would say there's not a lot of stuff anymore for the kids to do in this area, so it's a very positive thing for them [to come here] so they're not getting out of school and getting into trouble," staff member and former attendee Monica Manns says. "We provide a safe space for them to come do homework and to get out in the community and help." 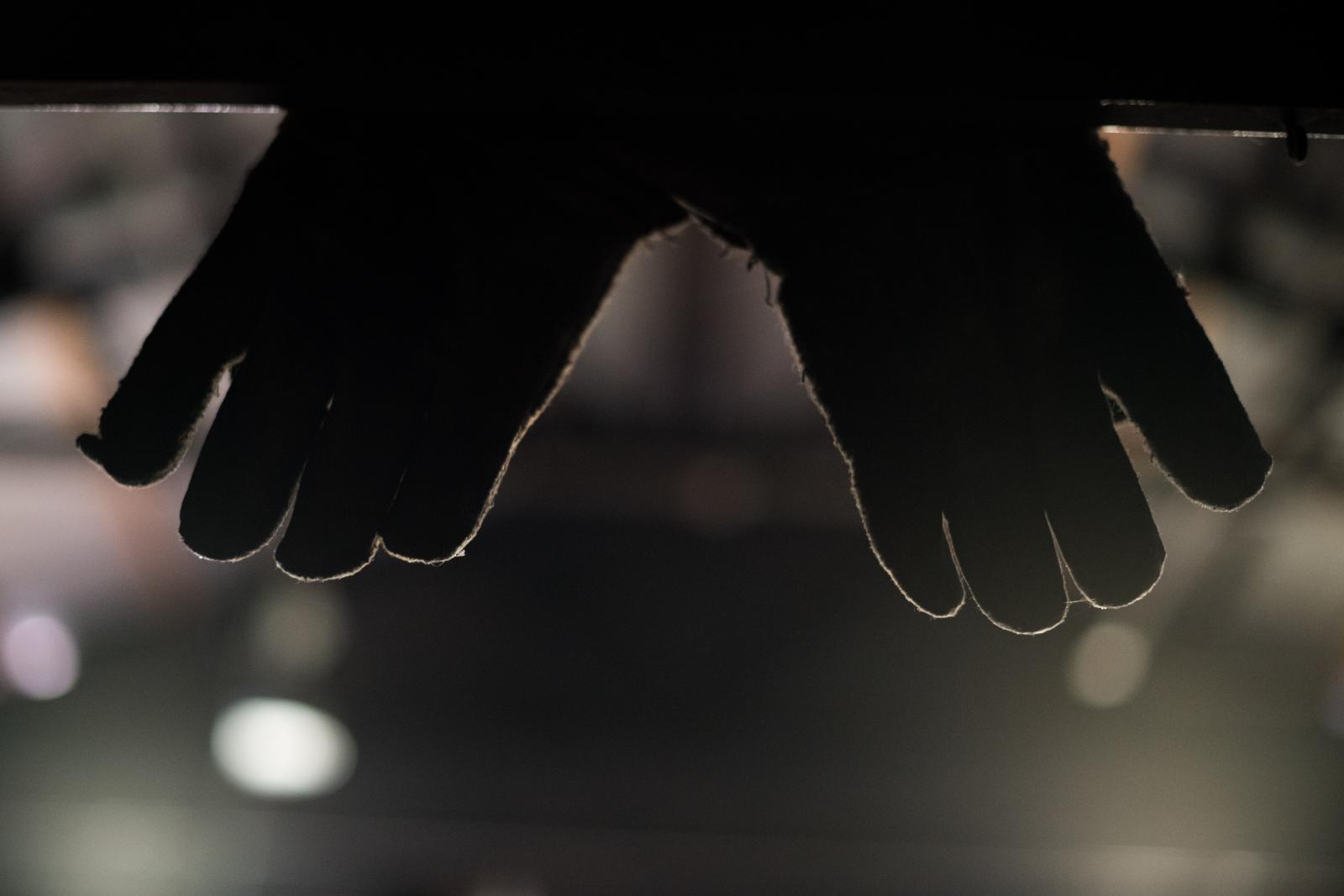 13 of 16 © 2023 Keith Rutowski
Four years after its closure, traces of human touch linger at the La Belle Cut Nail Plant. There's a nail bent into a coat hook. Chalk tally marks adorn a wall. A pair of gloves are tacked above a doorway. Above that door frame there's a message written in black marker on a strip of electrical tape: "Joe's Last Gloves." 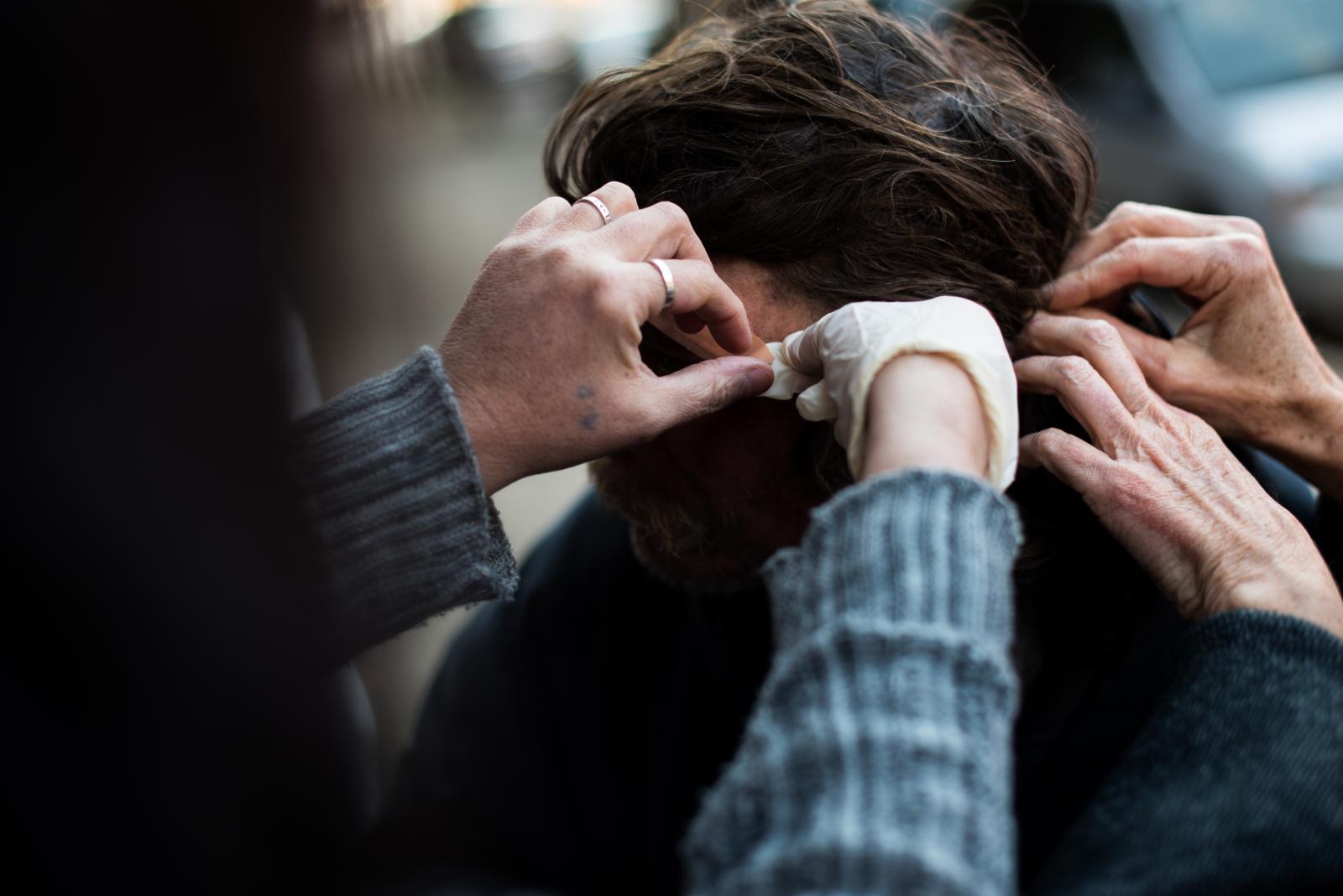 14 of 16 © 2023 Keith Rutowski
A man is bandaged after he fell on the street outside of House of Hagar Catholic Worker in East Wheeling. Kate Marshall, who operates the organization out of her own home, opens her doors to the city for meals on Sunday, offers her washing machine and shower to those who need them, and has taken in foster children who were in vulnerable situations—all of which are avenues for achieving her central goal for the city. “Our main mission is to be family to everybody here in this neighborhood,” she says. “The one thing I hope we are is hospitable love.” 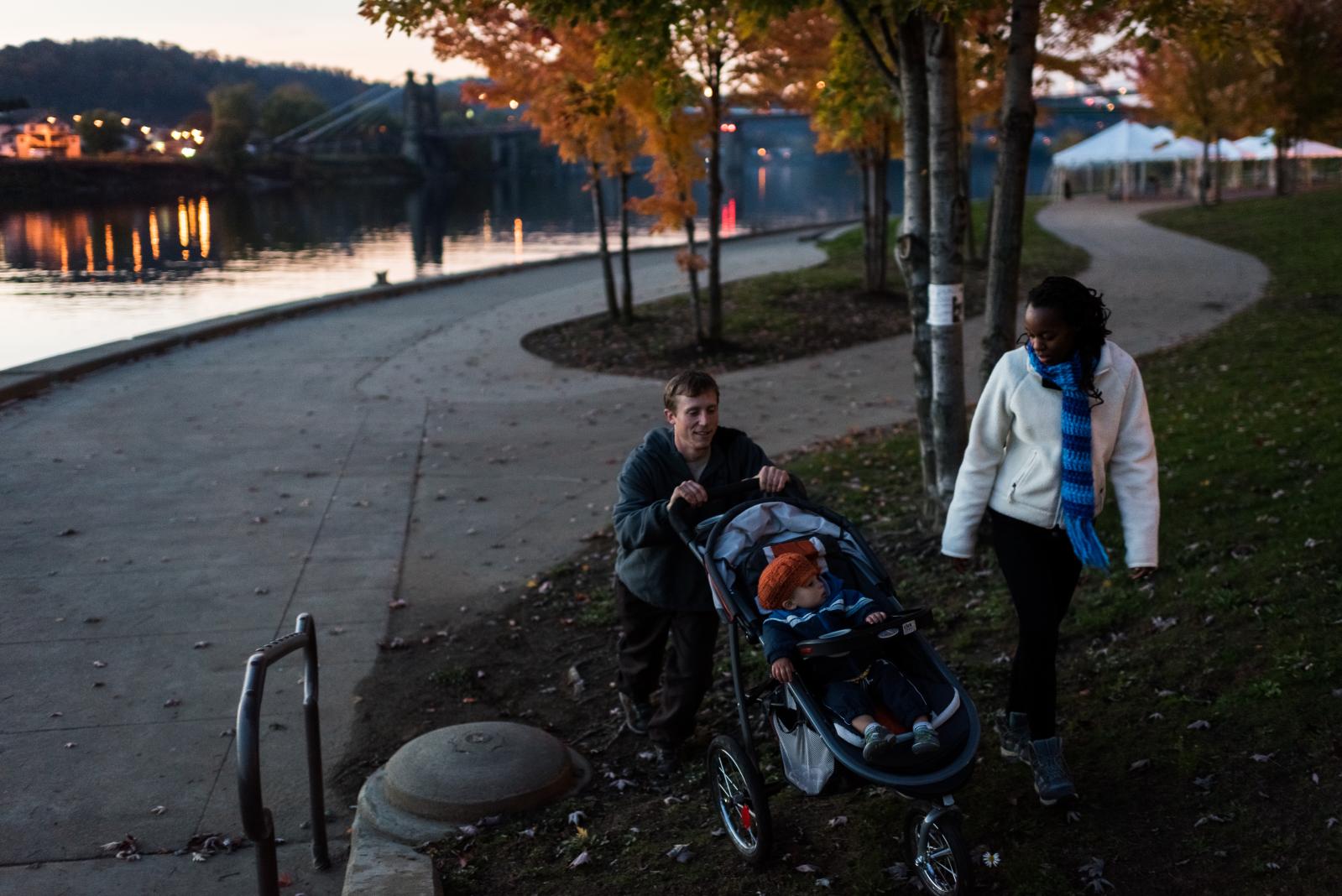 15 of 16 © 2023 Keith Rutowski
Danny Swan and Gloria Reina take an evening walk with their son, Sero, along the banks of the Ohio River in Wheeling. The city's population has been declining for decades, with young people leaving in particularly large numbers. In the past few years, however, a few have reacted against the trend, putting down roots and starting families and new ventures like Swan's Grow Ohio Valley, which produces fresh and healthy vegetables in this area that had been considered a food desert. Some hope that initiatives such as these will help carve out a new direction for post-industrial Wheeling.
Close

In Her Own Hands

Once the Ground Thaws

Dust of the Earth