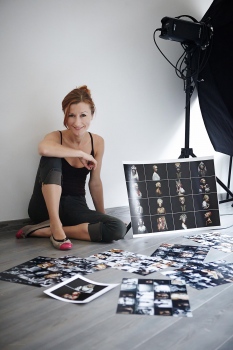 Artist I Photographer @ Freelance I Professional / Based in Bratislava

Photography became a part of my life and professional development during my stay in Prague (1999-2004).  I won an award in the Czech Republic in 2006 for my creative portrait entitled “Sebeláska” (Self-love). I perfected my craft at internships and during stays in France (2007 - 2010). I am seeking to renew interest in traditional art, offering a modern view  to today’s generations. I aim to see also new way of communicating concepts, renewing forgotten and linking it with symbols and cultures all over the world where I see no borders and limits for mutual understanding and inspiration. Simplicity is crucial. I honor aesthetics and harmoniously combine the objects, light, the models in a unity.

From 2008 to 2010 I had solo exhibitions and group exhibitions within the framework of significant artistic events in PiešÅ¥any and Bratislava:

“Viva Musica!” music festival of a classic in Bratislava´s old center 2008, solo "Passionately with feeling" (2004-2008) in the old cultural town of PiešÅ¥any in 2009, creative concept accomplished for the Notabene charity organization promotion in accordance with its 8th anniversary, carrying out the original concept called “We help them to take off” in 2009,  portraits named “Are we different or not” on the New Bridge over the river Danube of the Capital in Slovakia i 2010

In August 2014, I presented renaissance of the art and aesthetics of Slovak traditional folk costumes named “Slovak Renaissance”, the first modern art photographic display of Slovak Folk Art and cultural heritage in Slovakia. In 2016 my work was presented in Paris at EURO2016 (country representation). In February 2017, I had solo exhibition at Miloš Alexander Bazovský fine art gallery in TrenÄín in Slovakia and achieved over 4200 recording visitors (record turnout of the gallery).
Slovak Renaissance artwork showed great solo exhibition display at prestigious Danubiana Meulensteen Art Museum in Slovakia in summer 2017 (2.6.-3.9.2017). Visitors had a great opportunity to see these large-format photographs within great exhibition space in Europe.

2019 - "ANOTHER EUROPE", SIBIU, Romania, curated by Hamish Park, The Austrian Cultural Forum Bucharest in collaboration with EUNIC Romania, the European Commission Representation in Romania and the Municipality of Sibiu, an outdoor exhibition featuring 28 photographs, one from each EU Member-State, which explores the diversity of European Heritage. On view: April 18th - May 16th, 2019

* in 2018 - "ANOTHER EUROPE", London Kings Cross, UK, group exhibition of European Heritage as representing artist for Slovakia, around the Kings Cross area of London, along King’s Boulevard and Pancras Square, curated by Hamish Park, UK, Austrian Cultural Forum London in collaboration with the Representation of the European Commission in the UK and EUNIC (European Union National Institutes of Culture). On view: July 10th - August 9th 2018

* In 2016, her artwork Slovak renaissance was presented in Paris at EURO2016. In February 2, 2017, M.A.Bazovsky Gallery in Trencin in Slovakia, opened her exhibition "Slovak Renaissance" where public has great oppportunity to see large format photographs (achieved over 4200 recording vsitors, record turnout of the gallery).

* In August 2014, she presented renaissance of the art and esthetics of Slovak traditional folk costumes named “Slovak Renaissance”, two year project (2012-2014), to celebrate the art of Slovak ancestors and showing respect and appreciation for Slovak folk art and traditions.

* In September 2010, she exhibited her portraits named “Are we different or not” on the New Bridge over the river Danube of the Capital in Slovakia.

* In November 2009 Petra exhibited her creative concept accomplished for the Notabene charity organization promotion in accordance of its 8th anniversary. She carried out the original concept called “We help them to take off” and she received first respectful media recognition. This creative photography concept reflects the enjoyment of former homeless people who had been able to change their lives and to become respectful personalities.