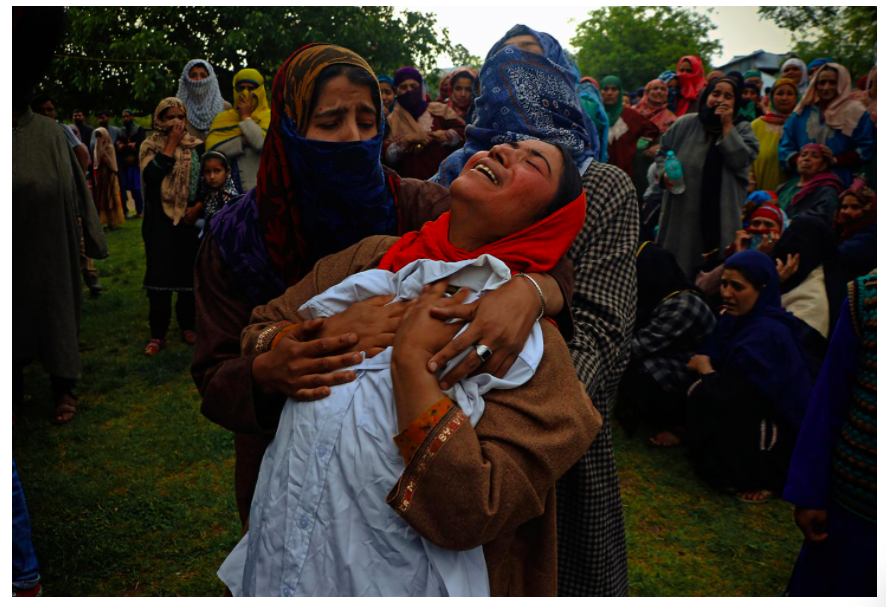 1 of 3 © 2021 International Women Media Foundation
Masrat Zahra,  Winner of the Anja Niedringhaus Courage in Photojournalism Award.  Masrat is a freelance photojournalist and a documentary photographer from Indian controlled Kashmir. She reports mostly about women and children in conflict 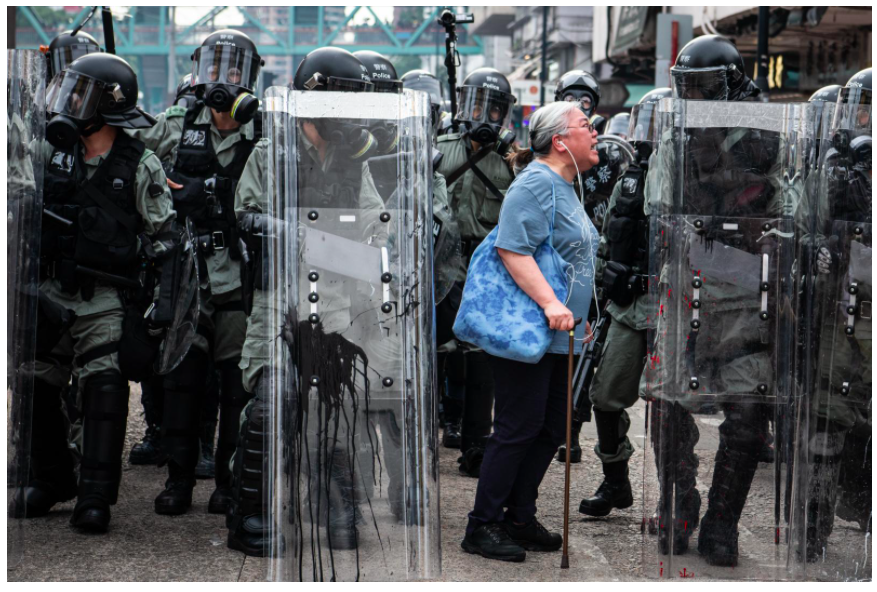 2 of 3 © 2021 International Women Media Foundation
Photo by Laurel Chor, a Hong Kong freelance photojournalist documenting the city’s struggle for democracy, freedom, and human rights. Laurel was one of the two photographers who received an honorable mention. 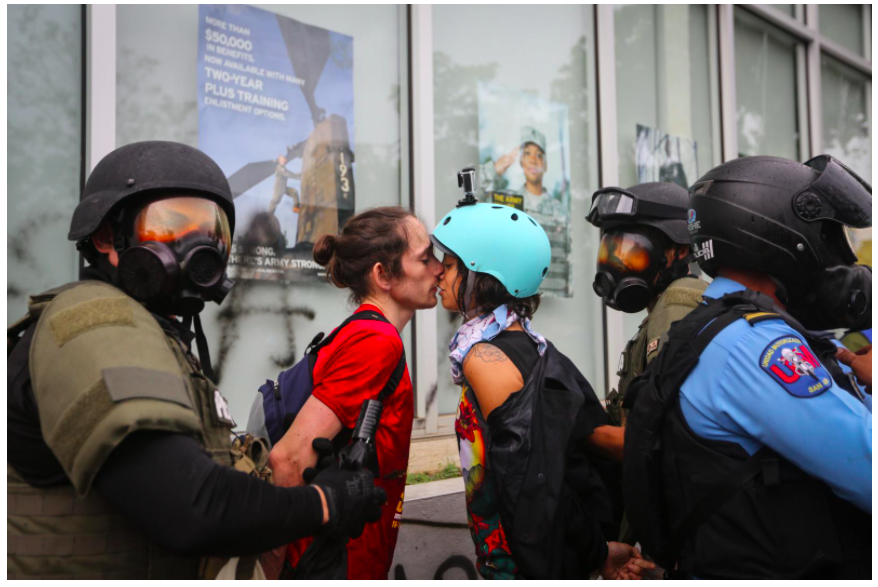 [June 11, 2020 – WASHINGTON, DC] – The International Women’s Media Foundation announced Kashmiri freelance photojournalist Masrat Zahra today as this year’s Anja Niedringhaus Courage in Photojournalism Award winner. The annual honor recognizes the importance of visual journalistic work that inspires us to take action and compels us to better understand the world. The award was created in honor of German Associated Press photojournalist Anja Niedringhaus, who was killed in Afghanistan in 2014.

Zahra was selected as the winner for her portfolio of conflict in Kashmir from a pool of more than 100 applications of women photojournalists from 40 countries worldwide. The IWMF also announced two honorable mentions: Hong Kong freelance photojournalist Laurel Chor documenting the city’s struggle for democracy, freedom and human rights; and, Puerto Rican freelance photojournalist Nahira Montcourt, reporting on the social unrest following the approval of the Puerto Rico Oversight, Management, and Economic Stability Act (PROMESA) that established a financial oversight board addressing Puerto Rico’s debt.

This year’s submissions reflected the toll of government surveillance and political threats on local communities. Amidst the danger, each of this year’s honorees operated bravely in her own community to document civilian sacrifice and resistance. Working in Kashmir, Zahra endures frequent harassment and consistent labeling as a threat to the Indian government. She was included on the June 2020 One Free Press list, which documents the world’s most urgent press freedom cases, due to an open investigation of photographs she posted on social media; Zahra could face a fine of up to seven years in prison.

“Countless communities around the world are facing enormous threat, harm, and censorship due to governmental threats and the declining state of press freedom worldwide,” said the IWMF Executive Director Elisa Lees Muñoz. “During these times, Anja’s legacy reminds us that it’s the communities beneath the headlines who are the true targets of civil and social brutality. We are deeply honored to recognize Masrat, Laurel, and Nahira this year in Anja’s spirit.”

The jury of this year’s awards – Corinne Dufka, Jacqueline Larma, Eman Mohammed, Bryan Monroe, Robert Nickelsberg, Adriane Ohanesian and Tara Pixley – issued the following remarks: “Our winner and honorees this year exhibited stunning emotion, dynamic composition and most significantly, put themselves in direct contact with those experiencing immediate suffering, at immense personal risk. These portfolios are not easy to create, and these women crafted haunting and lasting narratives of their own communities, bringing the world into their stories. Congratulations Masrat, Laurel and Nahira.”

Anja Niedringhaus was a recipient of the IWMF Courage in Journalism Award in 2005. The winner’s $20,000 prize is made possible by the Howard G. Buffett Foundation. Honorees’ images and captions, biographies, and headshots are available for media use with proper attribution; to inquire further, please contact Charlotte Fox (cfox@iwmf.org).

This year’s winner Masrat Zahra is a Kashmiri freelance photojournalist who has been working in Kashmir for the past four years.

Born and raised in Srinagar's old city into a conservative Muslim family, Zahra would often observe clashes between Indian security forces and Kashmiri protesters. Defying the wishes of her family, Zahra became a photojournalist in order to join Kashmiri journalists working tirelessly to cover the Indian occupation of the region and its toll on local communities. Today, as one of a small group of women photojournalists in the region, Zahra now faces consistent resistance based on her profession and her gender.

Zahra’s work has appeared in The Caravan, The Washington Post, TRT World, Al Jazeera, The New Humanitarian, Religion Unplugged, and several other media outlets. Zahra has previously exhibited at the annual Photoville festival in New York with her portfolio, “Journalists Under Fire.”

Juror Eman Mohammed noted that “Masrat’s portfolio touches us with its humanity. Her work is intensely feeling, and she consistently puts herself before extreme danger to bring us the stories of her communities, especially those of women.”

Juror Tara Pixley commented that “Masrat’s use of color, composition, shadow and light infuses her imagery with both dread and community. The story behind her work lends a closeness to her subjects, which requires a huge level of courage given the current situation in Indian-occupied Kashmir.”

With deep gratitude from Kashmir, Zahra commented: “Receiving this award from the IWMF shows that the work of journalists like me coming from small places is being acknowledged. I hope this honor will encourage me to perfect my skills and do my work more confidently. I also expect it to inspire other women photographers who are working in difficult environments. This is an honor to all women who choose to work in conflict zones. Finally, I would like to express my sincere gratitude to my mentor, Showkat Nanda, for helping me to be a better storyteller.”

Currently, Chor is covering the Hong Kong protests. Previously, she was the Asia reporter and producer for VICE News Tonight on HBO, covering news, culture and politics across the region: from the Rohingya refugee crisis to the Chinese social credit system, from the assassination of Kim Jong Un’s half-brother to Chinese "boy" bands and from the earthquake in Palu, Indonesia to the war on drugs in Bangladesh.

Prior to that, Chor was the managing editor for Coconuts Hong Kong. In 2013, Jane Goodall appointed her to be the ambassador for the Jane Goodall Institute in Hong Kong.

Commenting on Chor’s portfolio, the jury noted that her portfolio demonstrated, “unique framing, complex commentary on community and great skill with the sequencing of the narrative.”

This year’s honoree Nahira Montcourt is based in San Juan, Puerto Rico. She is a documentary photographer and independent photojournalist currently working for digital newspapers in the country. Montcourt’s work is centered on documenting protests, local politics and natural disasters focusing on women, social conflict and inequality.

Montcourt is a member of the board of directors of the Asociación de Fotoperiodistas de Puerto Rico. Her images have been published in outlets such as NotiCel, Calridad and the Center for Investigative Journalism. She has also collaborated with international news agencies Ruptly and the German Press Agency.

Montcourt has received awards from the Asociación de Fotoperiodistas de Puerto Rico, including the 2017 ‘Noticia del Momento’ award based on her work covering International Worlds Day protests in the San Juan banking district. In 2018, Montcourt was awarded a mention of honor for her coverage of protests in the city of Peñuelas.

The jury remarked that Montcourt’s portfolio was, “incredibly emotional with immense subtleties,” and demonstrated, “a prowess with photography both at night and with close-up work.”

About the International Women’s Media Foundation

Founded in 1990, the International Women’s Media Foundation (IWMF) is the only global non-profit organization that offers emergency support, safety training, reporting opportunities and funding avenues offered specifically for female journalists. We are making more women’s bylines possible and work tirelessly to ensure a greater diversity of voices represented in the news industry worldwide. Follow the IWMF on Twitter at @IWMF, on Facebook at @IWMFPage, and Instagram on @TheIWMF.

By International Women's Media Foundation — The application for the Anja Niedringhaus Courage in Photojournalism Award has been extended by two weeks...
Jun 3, 2021

By International Women's Media Foundation — Anja Niedringhaus' approach to photojournalism was best said herself, “I do my job simply to..
May 4, 2021

By International Women's Media Foundation / Washington, DC — One of the most serious barriers to inclusive democracies and institutions is violence or threats of..
Sep 22, 2020

By International Women Media Foundation / Worldwide — Hosted in partnership with the Committee to Protect Journalists (CPJ) this webinar was led by journalist..
Jun 6, 2020

THE PRESS CANNOT BE TRULY FREE WITHOUT THE EQUAL VOICE OF WOMEN. Her Voice, Her Words

By International Women Media Foundation — Women are continuously underrepresented in the newsroom. Women make up less than 37% of the articles..
May 3, 2020

Webinar: Advice From Funders on Reporting Grants for Photojournalists

By International Women Media Foundation — Join  The Everyday Projects for a webinar on how to apply for grants and fellowships with  the..
Apr 16, 2020