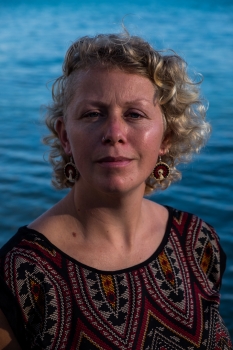 Primary clients: The Guardian, Al Jazeera, Deutsche Welle, El Paí­s, CARE, Goethe Institute
Coverage Regions: Europe Latin America
Languages Spoken: Dutch, Spanish, English
Years of experience: 3 to 5
Sanne Derks is a documentary photojournalist and anthropologist from Arnhem, the Netherlands. During her Ph.D. in Cultural Anthropology (2009) on how Bolivian women deal with gender, ethnic and class inequality within Marian devotion, she became interested in visual storytelling and journalism. In 2015-2016 she did a postgraduate in Photojournalism at the Universidad Autónoma in Barcelona and started as a freelance photographer. She focuses mainly on social documentary, preferably in Latin America, with a focus on climate-change resilience, water- housing- and human-rights. Her work is published in international media such as the New York Times, the Guardian, El País and Al Jazeera. She has been a Member of Women Photograph since 2018, a Robert Bosch Fellow since 2019 and a National Geographic Explorer since 2021.

Her long-term project Manifiesto del Agua on how the right to clean drinking water is managed in communist Cuba won third prize at the Dutch Silver Camera 2019, and was selected as one of 17 exhibitions at the renowned Visa Pour l'Image photo festival 2020 in Perpignan, France where it enjoyed worldwide attention. She was selected for the 20 Fotografos Workshop in Bolivia in 2018, the Eddie Adams Workshop 2020, where she won the Eddie Adams National Geographic Award, and the New York Times Portfolio Reviews in 2020. In 2021, her Rutopia project on repopulating ruin was villages in northern Spain have been awarded a grant from the National Geographic Society.

She implements anthropological themes and methods in her photography practice. Due to her background, she has an indefinite curiosity to understand what people moves and what meaning they attribute to their living conditions. Next to a Ph.D. in Cultural Anthropology and Gender Studies, she holds a Master in the Psychology of Culture and Religion (2003) and worked as a Psychology teacher.