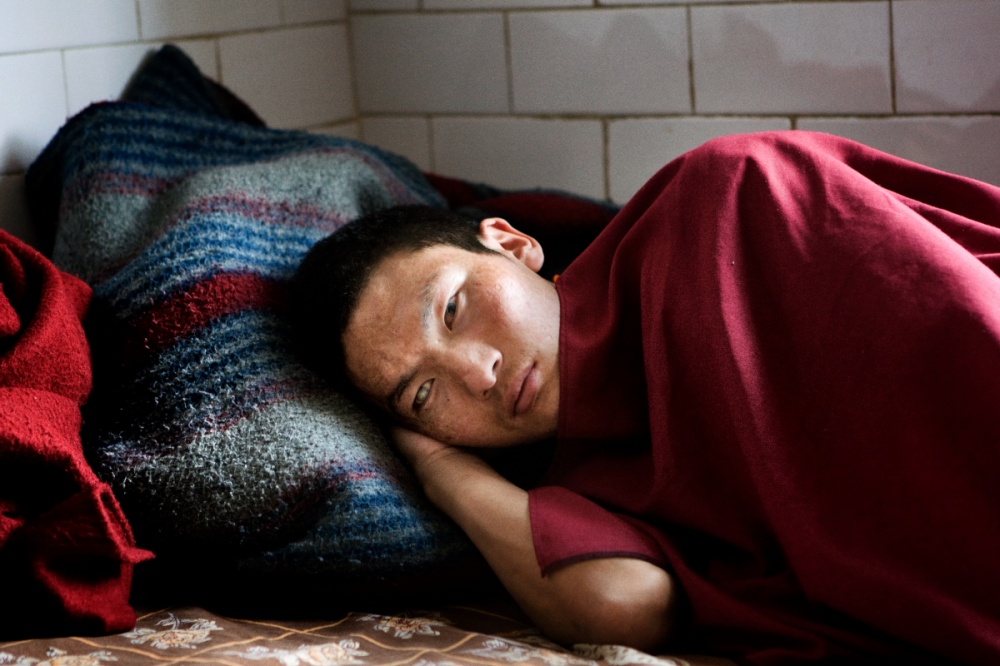 Ven. Tsering Phuntsok, a Tibetan monk who escaped from Tibet after the 2008 uprising, takes rest at the former reception centre for exiled Tibetans, the first place of refuge for new arrivals from Tibet, McLeodGanj, Dharamsla, Himachal Pradesh, India, 2008. As most of the refugees who escaped from the their homeland, 19 year old Phuntsok, crossed over the dreadful and hazardous terrain of Himalayas walking undercover, mostly trekking through the night and sleeping in caves. During the journey he lost his eyesight and was blinded due to the extreme climatic conditions. 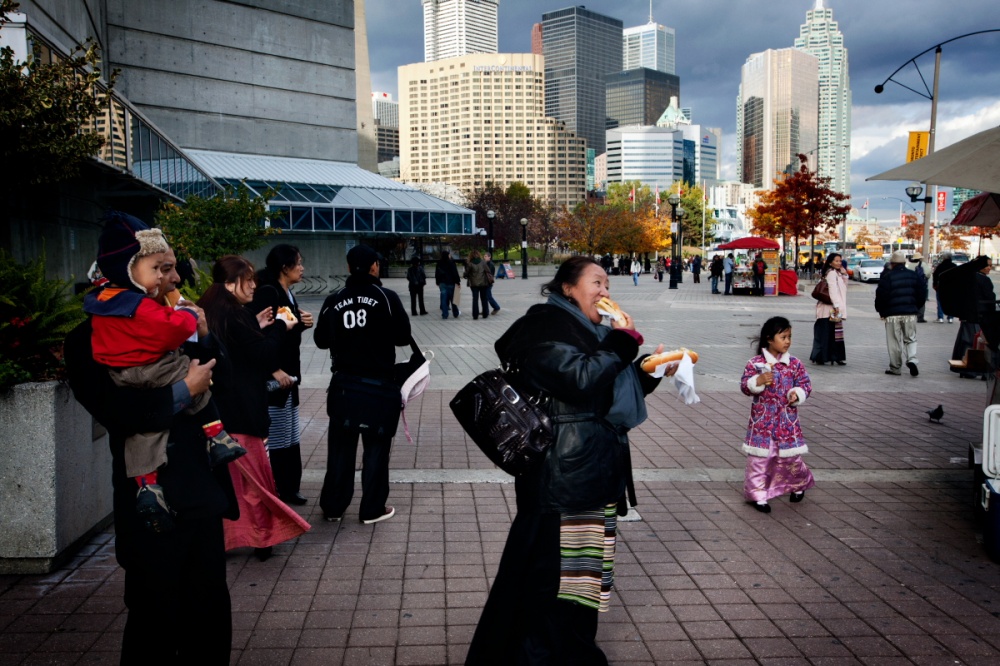 Exiled Tibetans walk around the Rogers Centre in Toronto, Canada, after attending a public talk given by His Holiness the Dalai Lama. 22 October 2010. 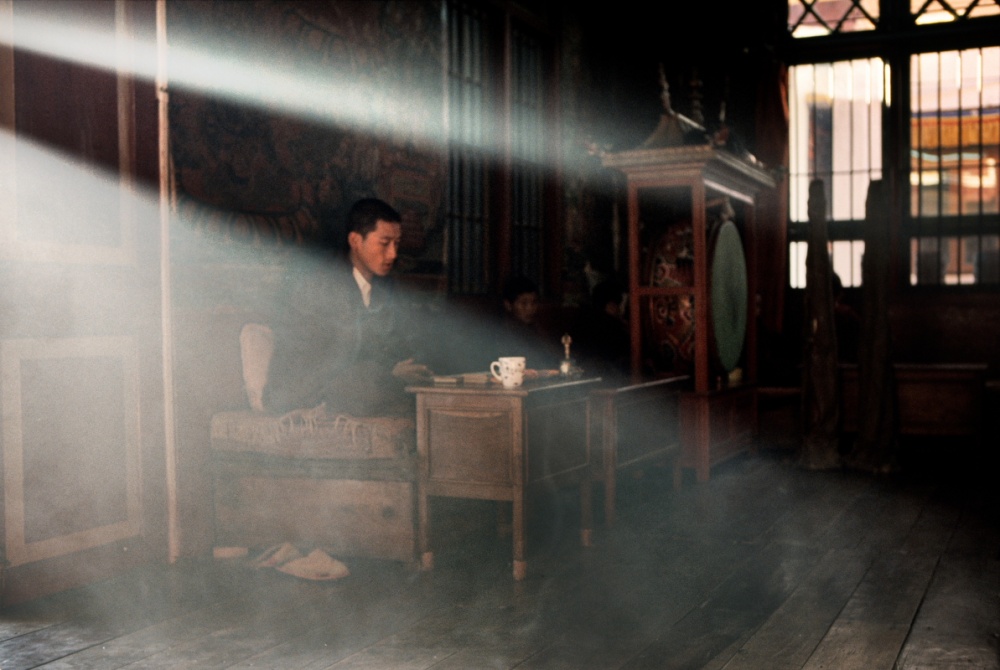 Light pouring in through the door frames a Rinpoche (reincarnated lama) while he holds the early morning Puja (prayers). This is a daily ritual in almost all the Tibetan monasteries. Sakya Choling Gompa, Darjeeling, India, 2006. 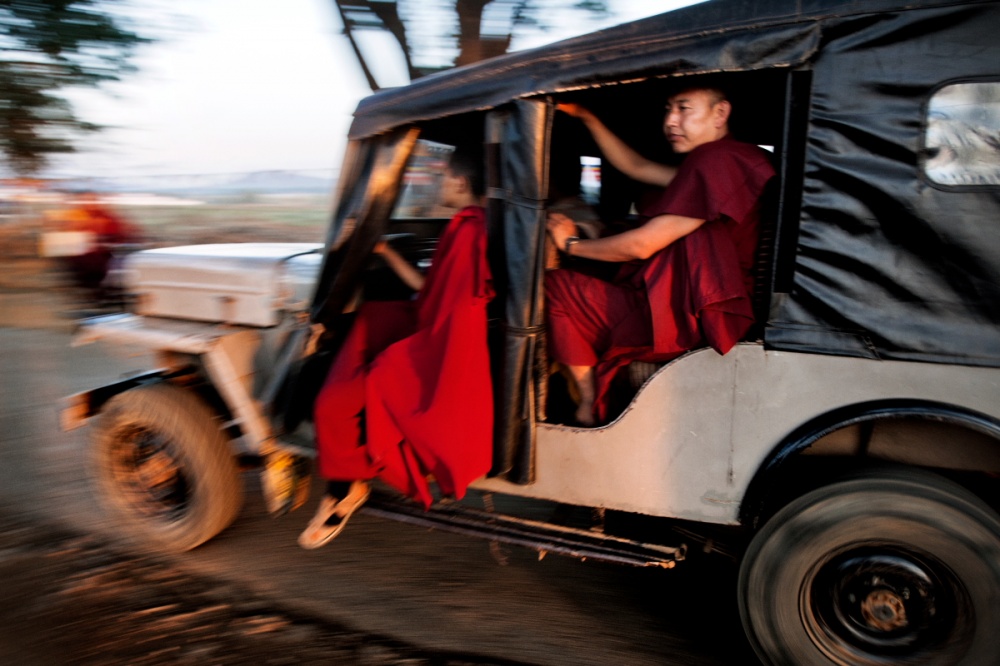 Tibetan monks take a ‘Jeep’ ride early in the morning to attend His Holiness the Dalai Lama’s teachings at Mundgod ,one of the largest Tibetan refugee settlements based in the South Indian state of Karnataka, India, 2008. 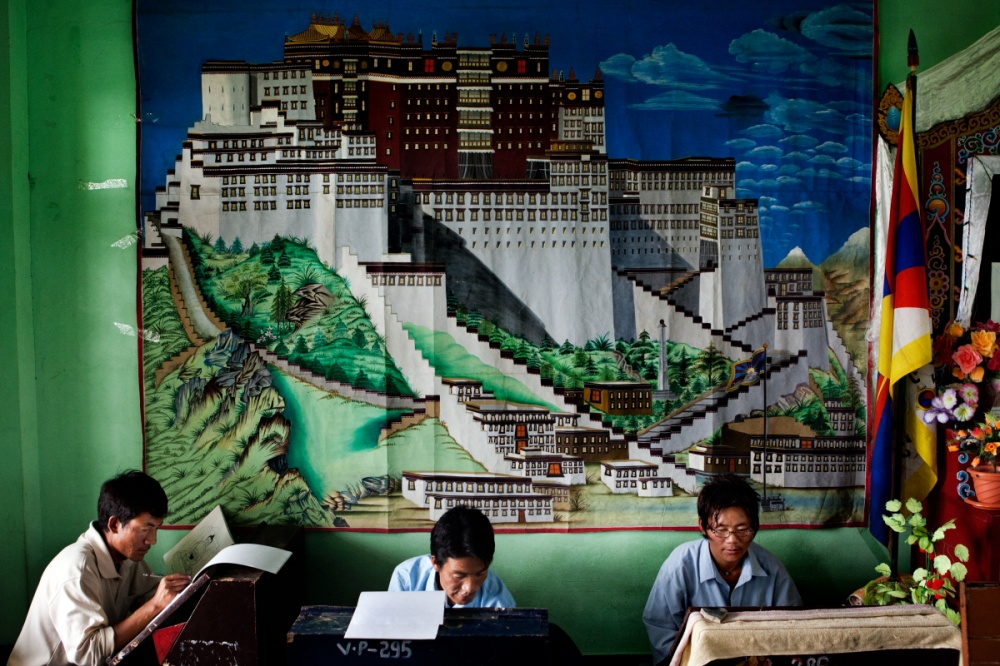 Three Tibetans refugees practice the art of Thangka painting at the Tibetan Transit School (TTS) in Dharamsala, Himachal Pradesh, India. May 2008. The school educates often illiterate fresh arrivals from Tibet between the age of 18 to 30, in basic conversational skills to train them in their desired vocation so they can adapt to the new environment of a foreign land and get a job. 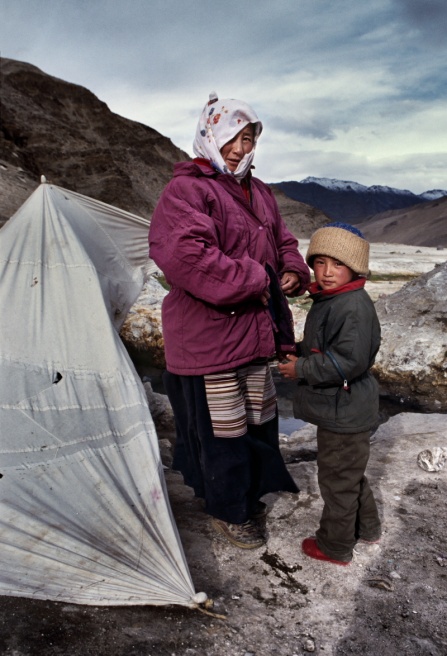 Many Tibetan Nomads resettled in the Indian territory of Ladakh post 1960’s and were unable to return due to the war between India and China in 1962, the Nomads continue to use modern army style tents as shelters while they graze their cattle around the rugged Himalayan terrain of Rupsu valley in Ladakh. Tibetan mother and son outside their tent. Rupsu valley, Ladakh, India, 2005. 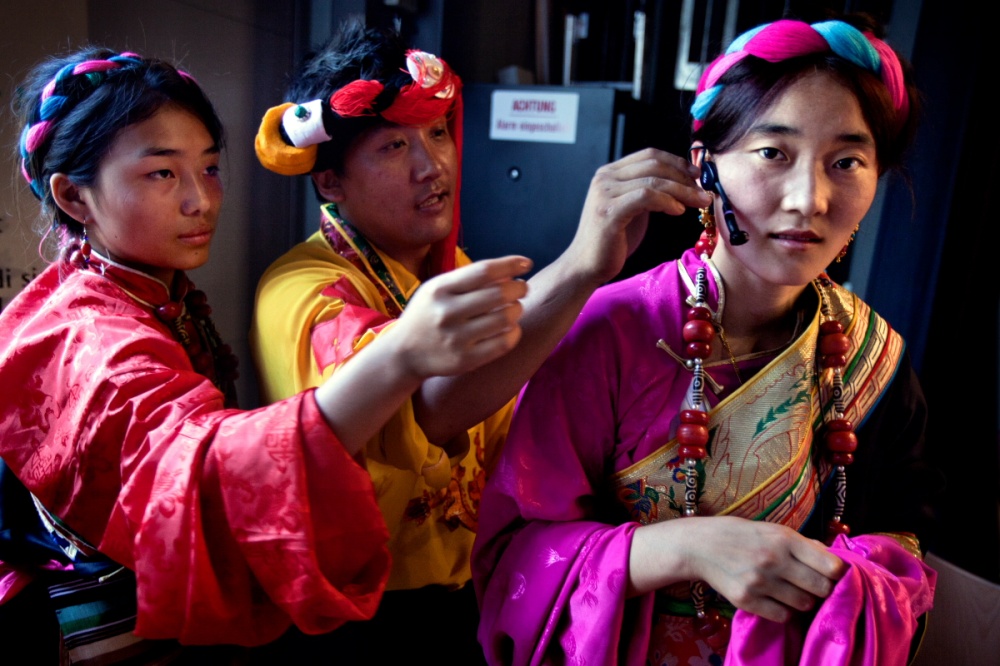 Tibetan performing artists in their traditional attire, gear up in the backstage for a performance to celebrate the 75th birthday of His Holiness the Dalai Lama in Bulach Stadthalle, near Zurich. Switzerland. July 2010. 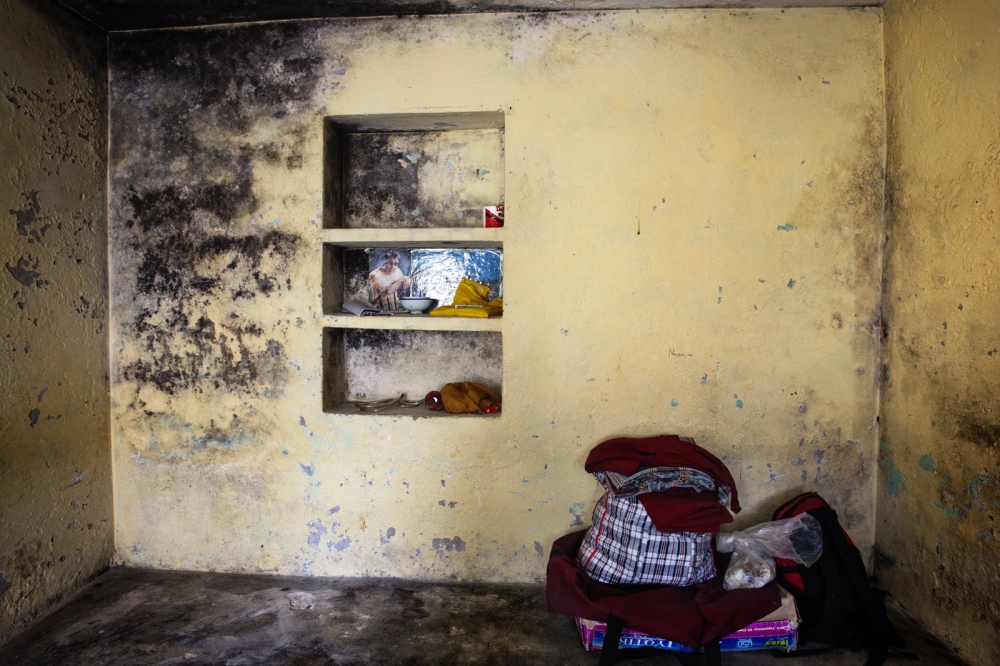 All the belongings of Choezom, a nun who had recently escaped from Tibet, placed in the corner of a room in Mcleodganj. Dharamsala, India, 2008. 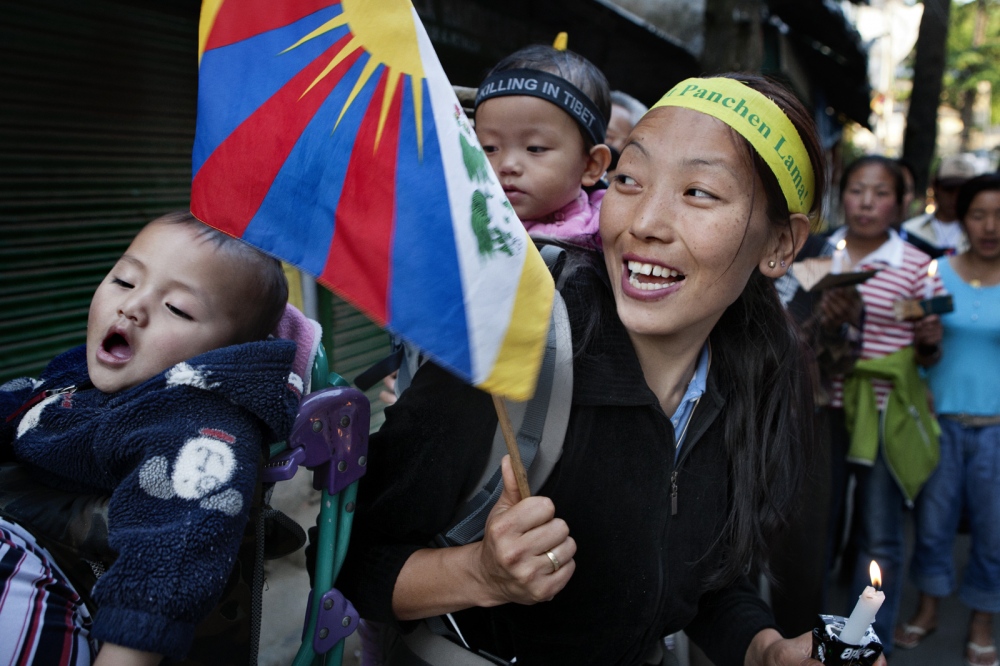 A young Tibetan mother with her child participates in a march in McLeodGanj demanding the release of their second most important spiritual leader: the Panchen Lama, on the occasion of his 19th birthday, 25 April 2008. Gedhun Chokyi Nyima at the age of five was recognized as the 11th reincarnation of the Panchen Lama by the Dalai Lama and various key Tibetan leaders. He was kidnapped by Chinese authorities five days after being recognized on May 17, 1995. Considered to be the youngest political prisoner his whereabouts are still unknown and many suspect he may have been murdered. 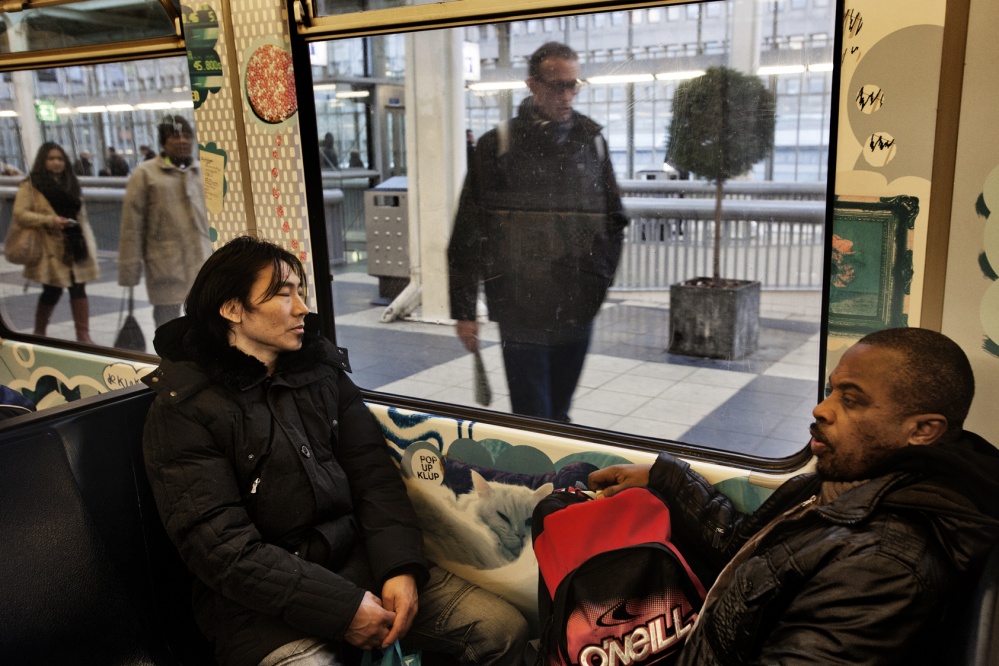 Dhondup, takes a quick nap in the metro on his way back from work. He escaped from Tibet in 2002 and crossed over to Nepal after 25 days of walking through the Himalayas. Dhondup was in transit for two weeks in Nepal before he was fortunate enough to directly emigrate to Holland and get a job as a housekeeper in a hotel. Amsterdam, Holland, 2013. 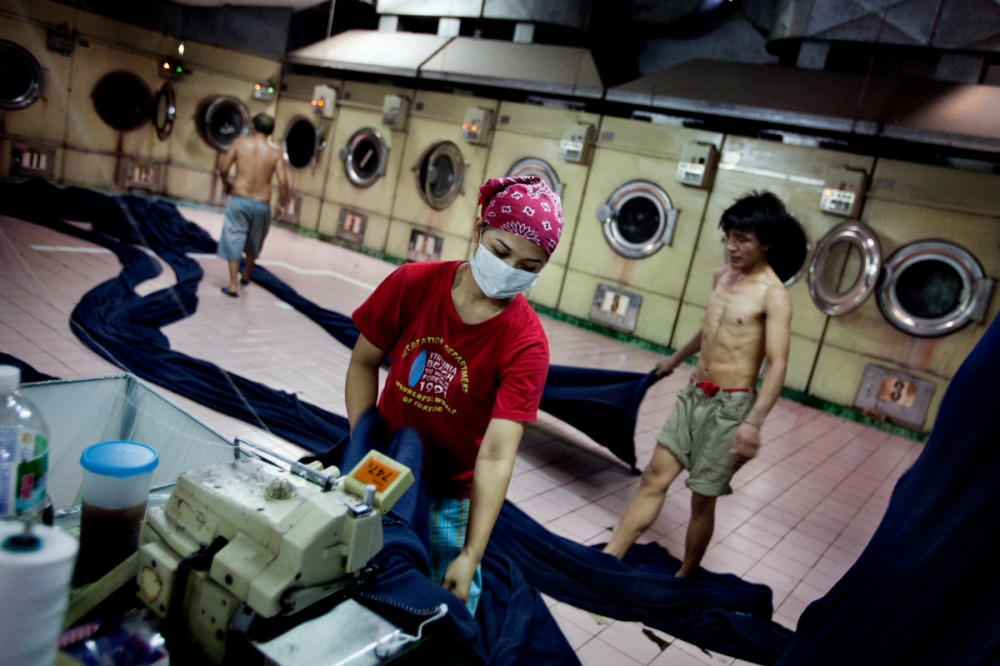 Tibetan refugees who move to Taiwan often make a living working in cloth factories. Jantsen, Dolma and Jigme (left to right), work at a factory in Taoyuan: labor is hard, they work 12 hour shifts in temperatures up to 40 C. and get only two days off a month, though the pay of 3000 TD a day is good for them. July 2009. 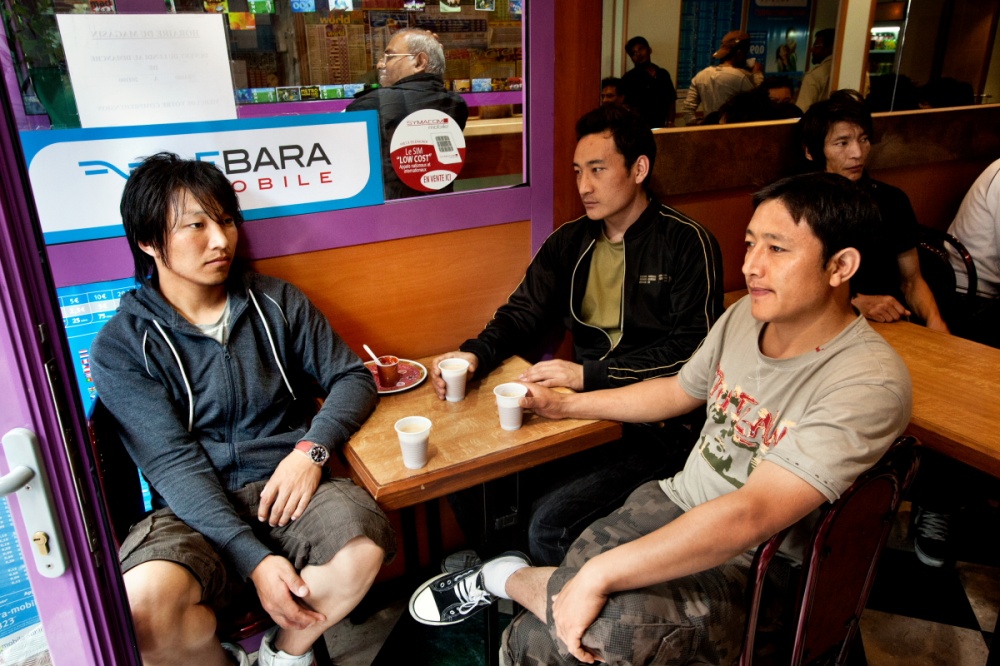 Young exiled Tibetans gather at a café, a regular hang out in the Indian neighborhood near Place de la Chapelle, Paris, France, 2010. 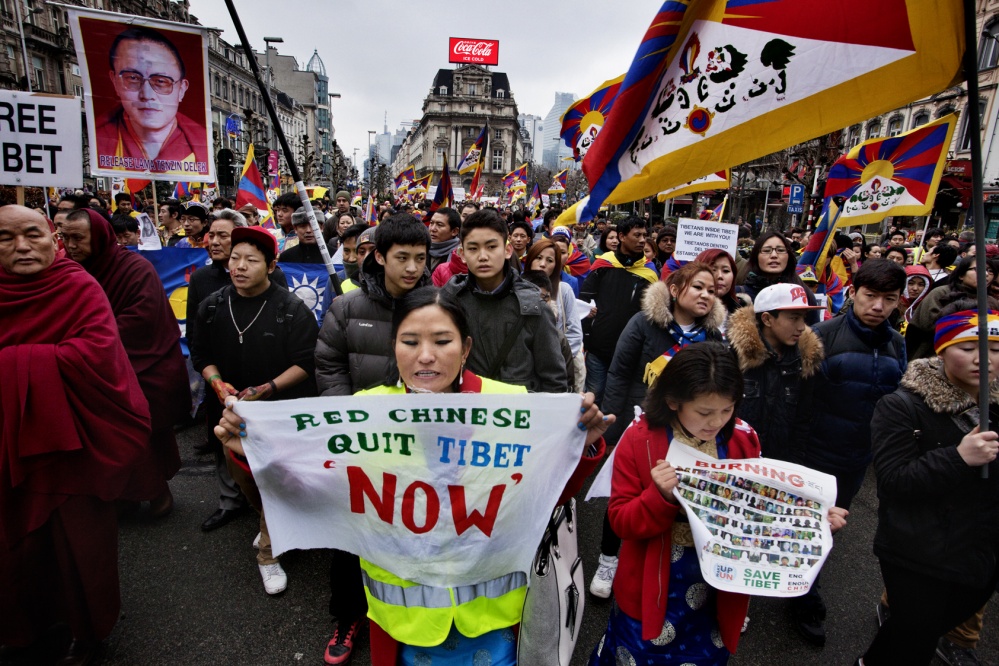 Thousands of Tibetans, gathered from all over Europe, march on the streets of Brussels, Belgium, during the "European Solidarity Rally for Tibet" to express solidarity with Tibetans within Tibet and to protest against the Chinese occupation of their homeland. The mass rally was organized on 10th of March 2013, marking the 54th Tibetan ‘uprising day’, with the goal of asking to the European Union to make Tibet the 'top priority' in their bilateral relations with China and to help to resolve the Tibetan issue peacefully. 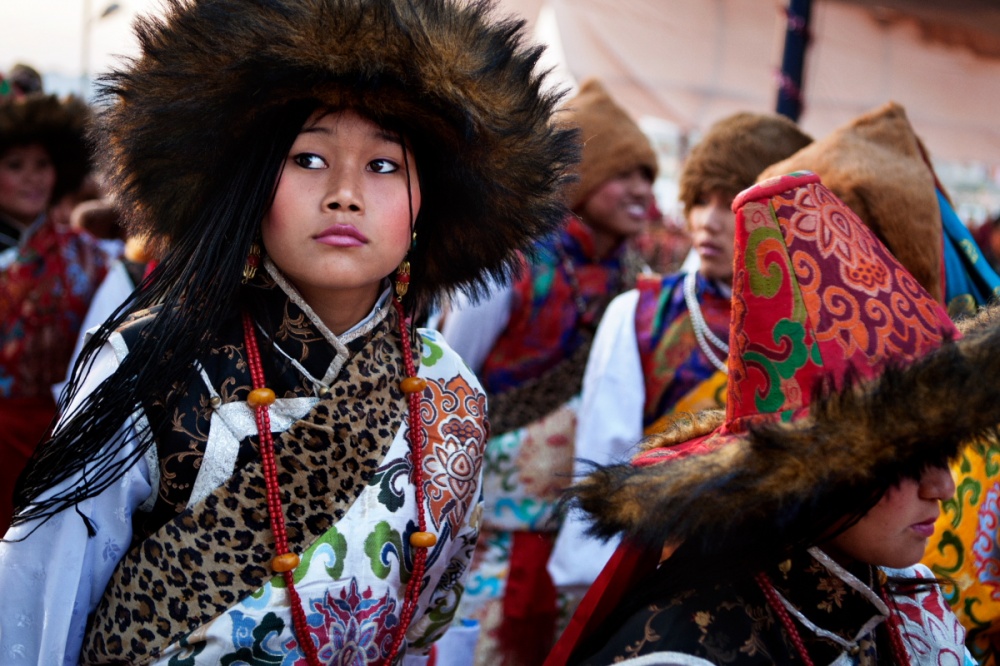 Young Tibetan girls dressed in traditional Khampa and Amdo attire prepare to perform their traditional dances during the teachings imparted by their spiritual leader the Dalai Lama at Mundgod, Karnataka, India, 2008. 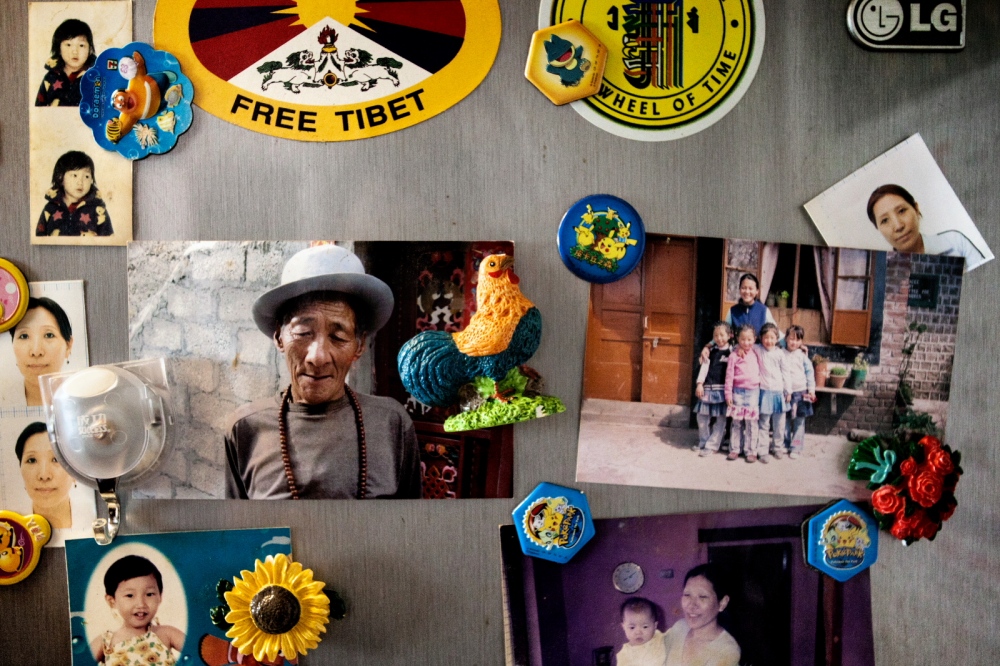 Old photographs and memories from Tibet are seen hanging on the fridge of a refugee's house. Taoyuan, Taiwan, 2009. 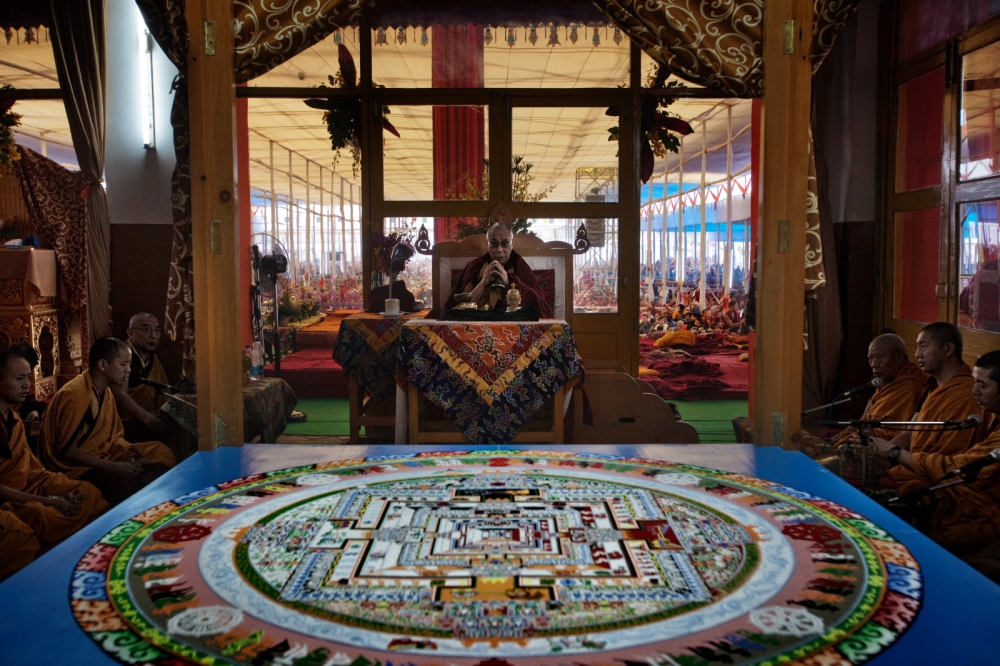 His Holiness the Dalai Lama prays in front of the Kalachatra Mandala: made entirely of coloured sand, the intricate Mandala is created by monks from the Namgyal Monastery and as a lesson about the impermanence of life, is destroyed when completed. Bodh Gaya, Bihar, India, 2012. 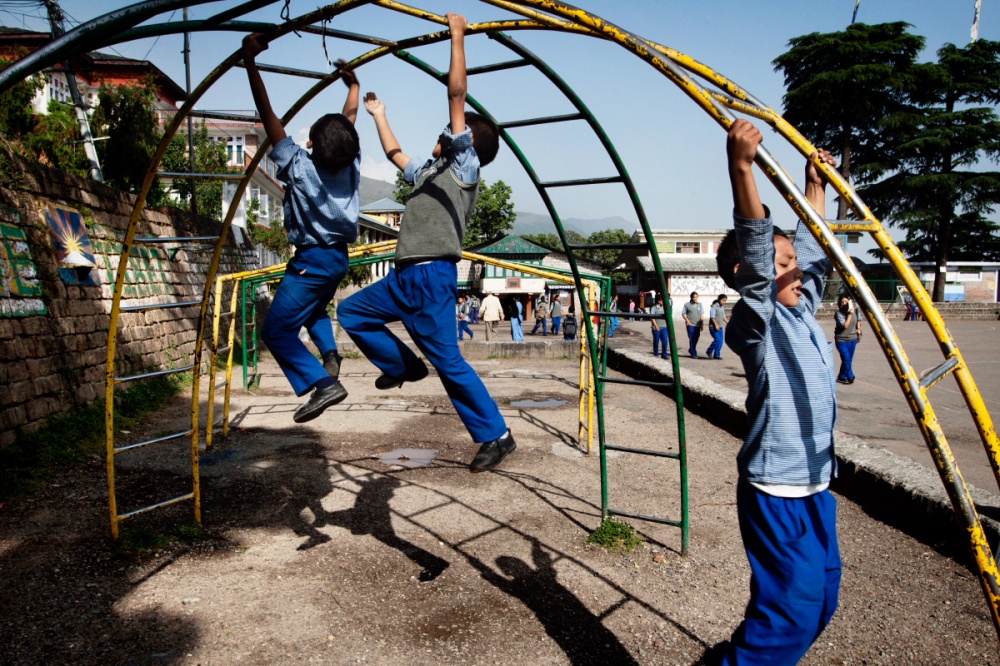 Tibetan children playing at Upper TCV Dharamsala, India 2008. TCV (Tibetan Children’s Village School) was founded in 1960 as a nursery and care centre for Tibetan children. Tsering Dolma Takla, the sister of His Holiness the Dalai Lama, volunteered to take care of 51 destitute children whose parents had passed away while working on road construction sites as laborers. Over the past five decades, TCV has established itself as the core founding institution for Tibetans in exile extending its branches from Ladakh in North India to Bylakuppe in South, catering to the needs of close to 17,000 Tibetan children, many of them orphans or separated from their families in Tibet. 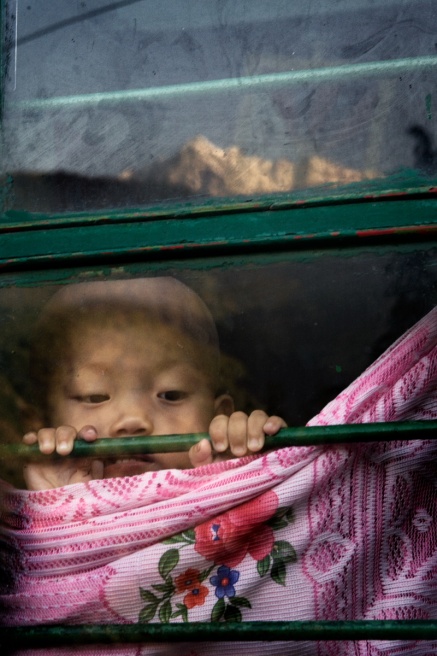 A young Tibetan refugee child looks out from a window which reflects the Dhauladhar range of the northern Indian Himalayas. McLeodGanj, Dharamsala 2008. 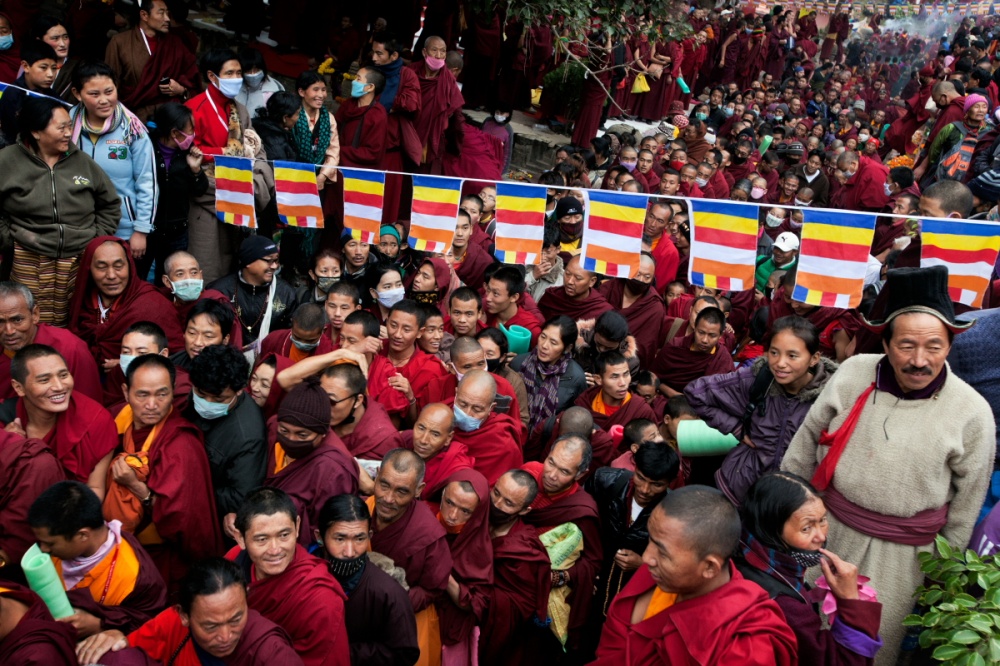 Thousands of exiled monks, nuns and Tibetans gathered around the Mahabodhi Temple, located where the Buddha is said to have attained enlightenment under the Bodhi Tree, in the occasion of the 32nd ‘Kalachakra’ prayers delivered by the Dalai Lama. Bodh Gaya, Bihar, India, 2012 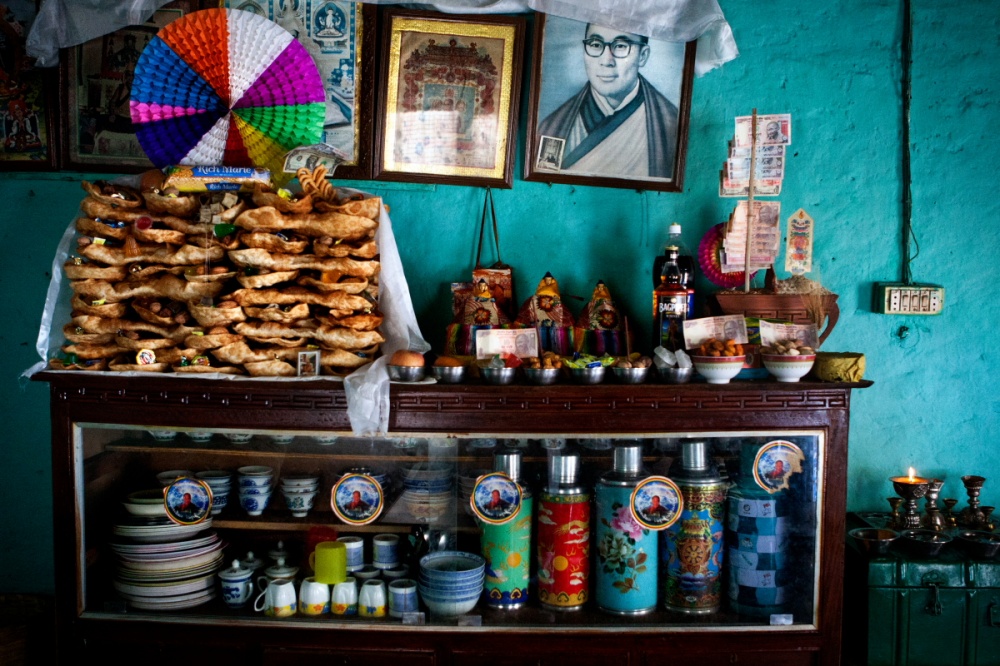 An altar with offers is seen in a house in Bylakuppe tibetan refugee camp, Karnataka, India, 2008. 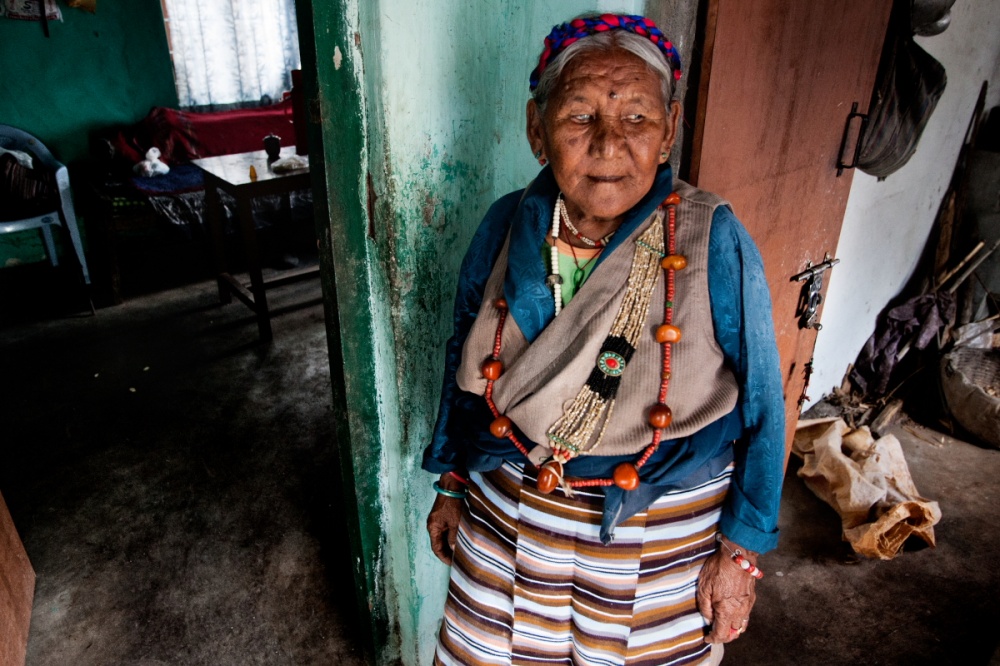 Pema Tsedon 79, from western Tibet, one of the first immigrants from Tibet to settle in Bylakuppe, the largest and first Tibetan settlement camp located in Southern India. Pema is dressed in traditional attire wearing rare coral beads at her home. Karnataka, India 2008 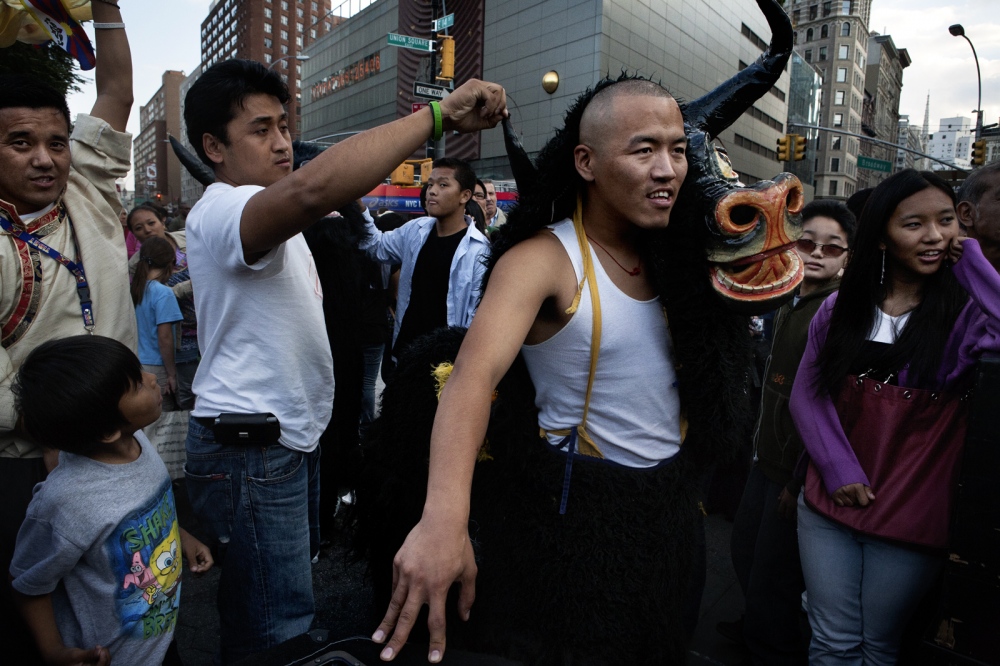 A Tibetan performing artist at Union Square, carries a mask during an event to celebrate the Congressional Gold Medal, one of the highest honors awarded by U.S. government to their spiritual leader the Dalai Lama. New York. U.S.A. 2007. 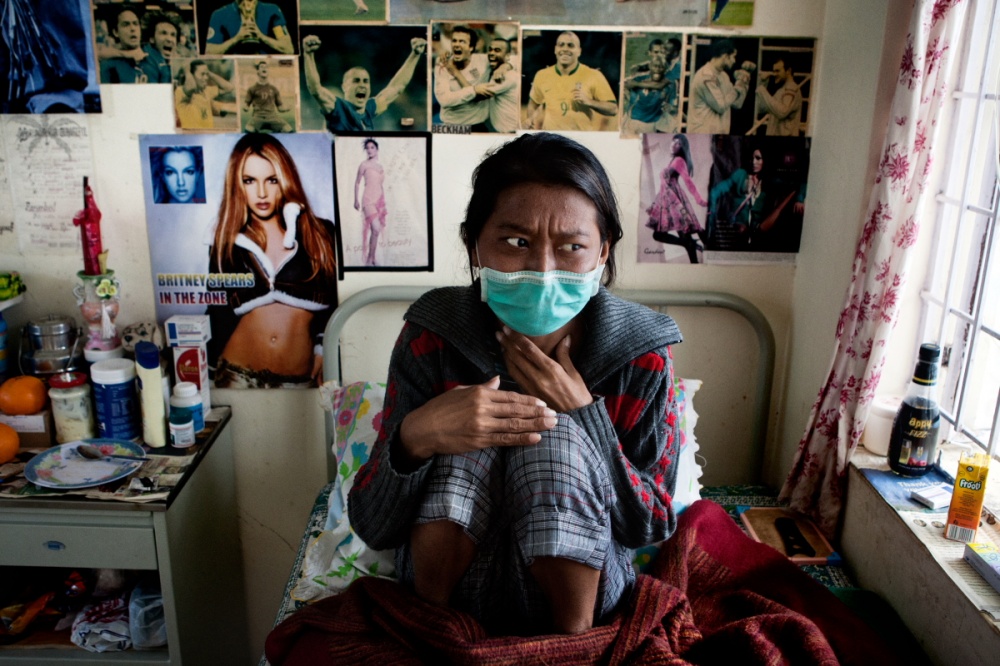 Namgyal, a tuberculosis patient, in her hospital room. The images behind her belong to the young boy who occupied the room before her, she dislikes them and would like to change these with images of Tibet, but she is too weak to do so. Namgyal died less than one year after this picture was taken. Tuberculosis is a major public health problem among Tibetan refugees in India. Bylakuppe, Karnataka, India, 2008. 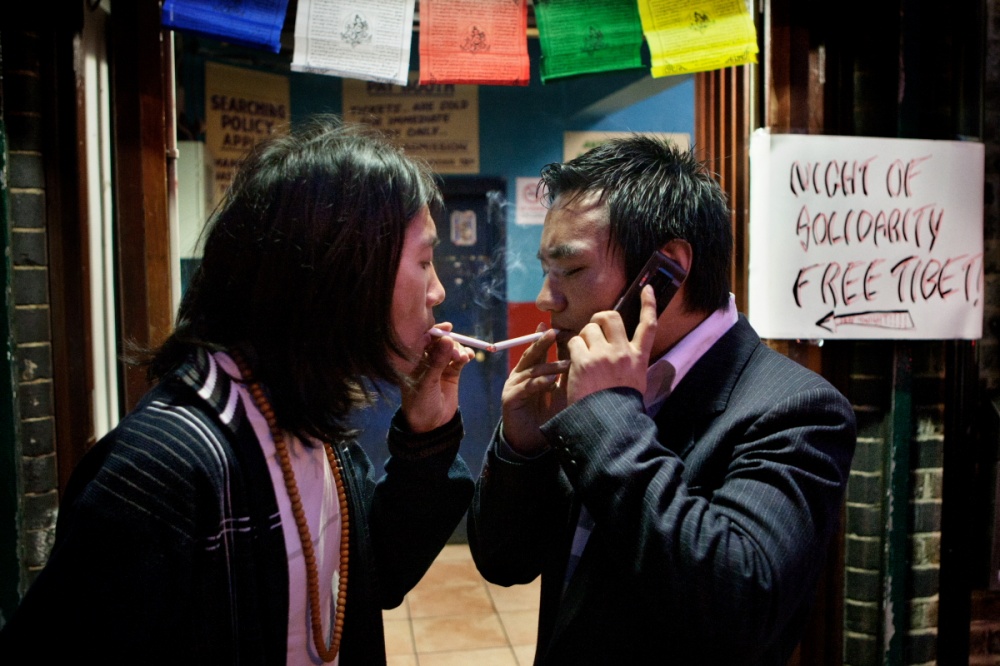 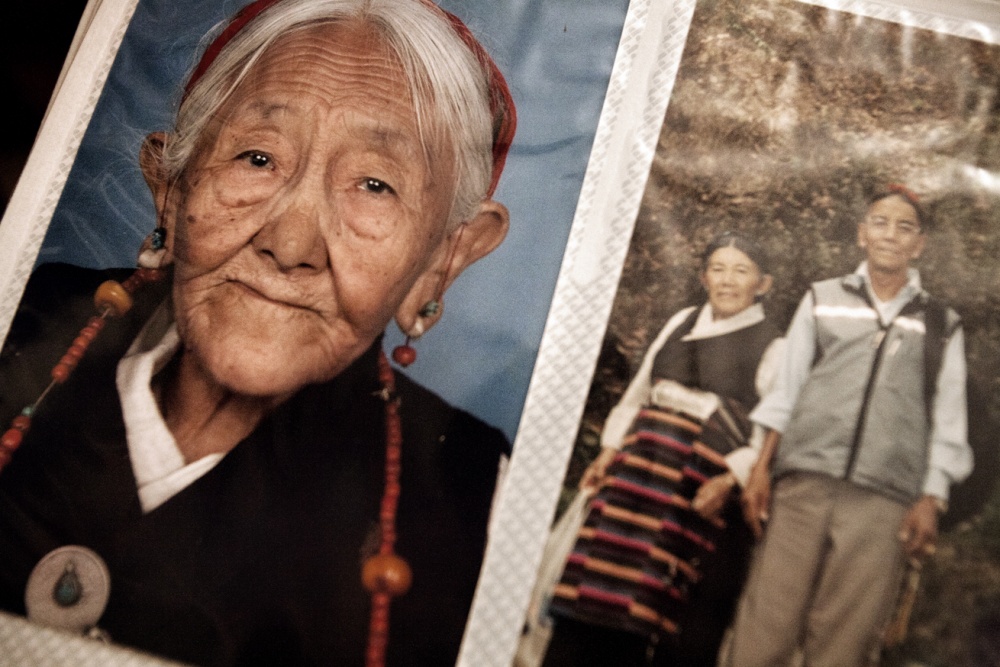 A photo album with pictures shot in Tibet is shown by an exiled family now settled in New York. Brooklyn, New York. U.S.A. 2007 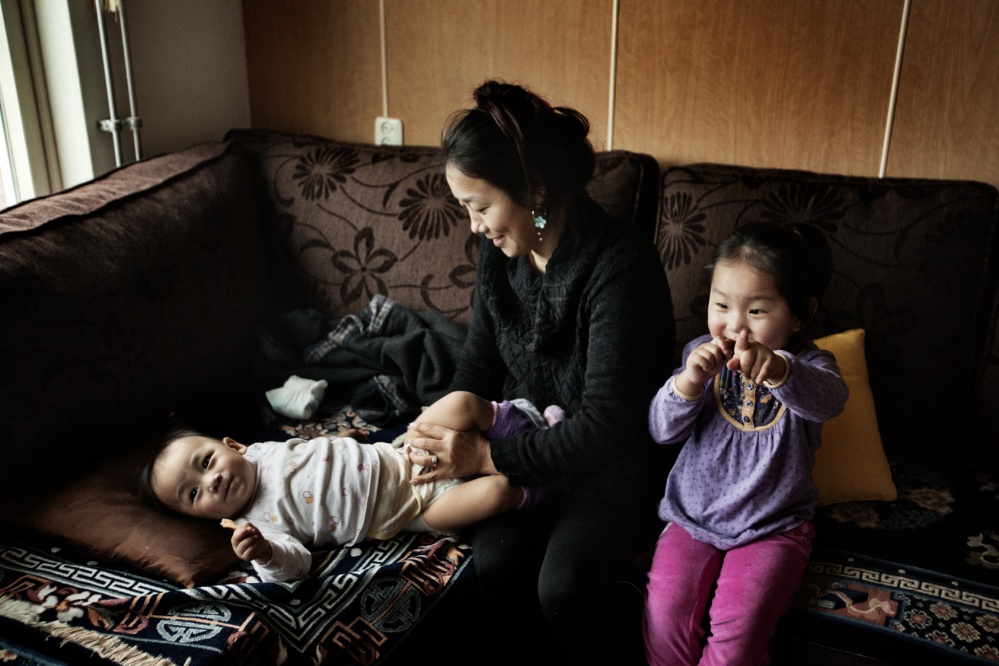 Dolma, a young Tibetan mother tends to her two children at her home in Amsterdam. Dolma has been living in Holland for the last four years where she gave birth to both her children, Tenzin Choeyang and Tenzin Sherap. Amsterdam, Holland 2013. 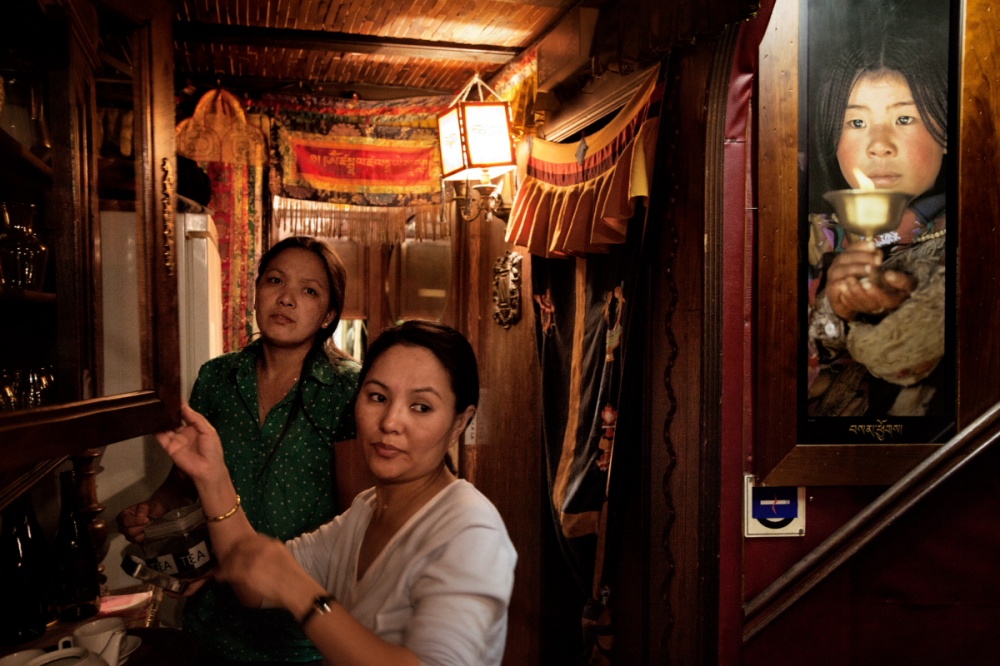 Yangchen Lhamo who came from India in 2001 at work with her colleague at "Gang Seng Tibetan restaurant" in Paris. The Tibetan owner, Tenzin, originally from Kham relocated and took refuge in France where he now runs the popular restaurant and employs new Tibetan arrivals and helps them to resettle. Paris, France, 2010. 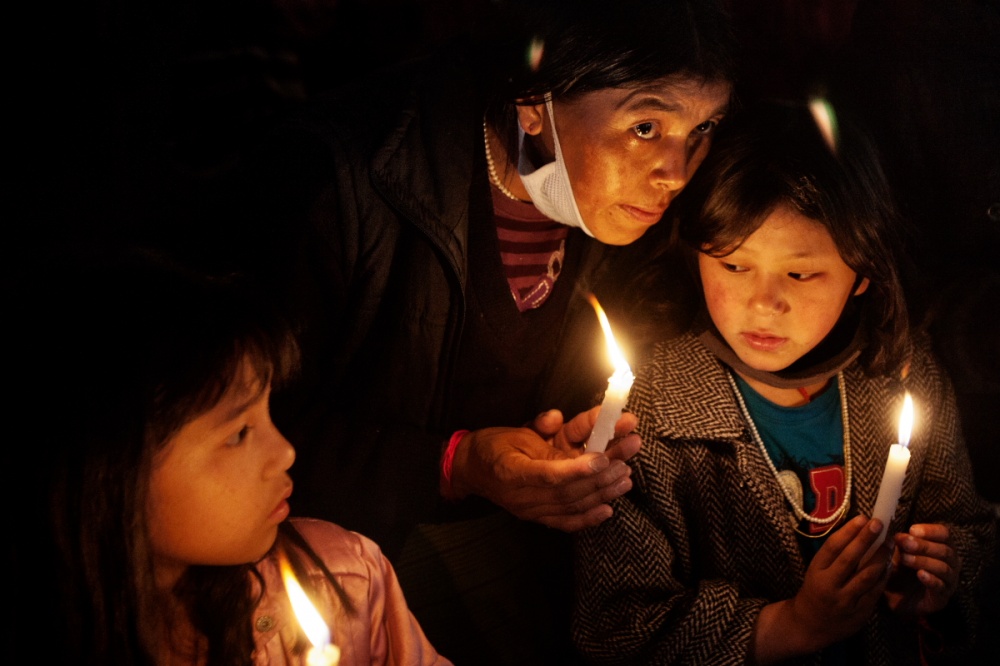 A Tibetan woman with two children participate in a candle light vigil to mourn and honor Tibetans who have carried out self-immolations in order to protest the chinese occupation. Bodh Gaya, Bihar, India, 2012. 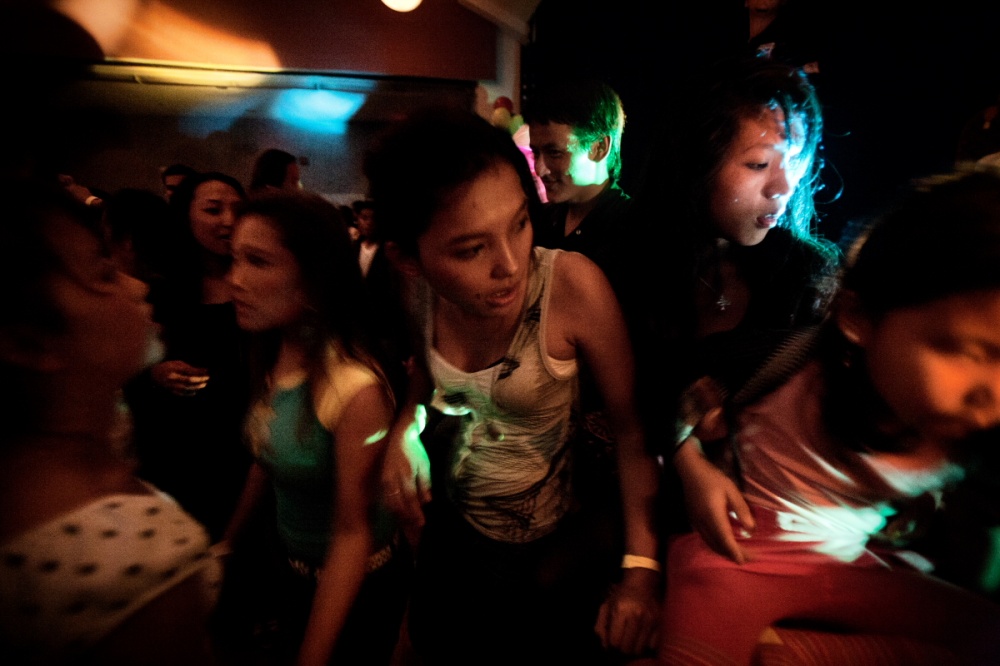 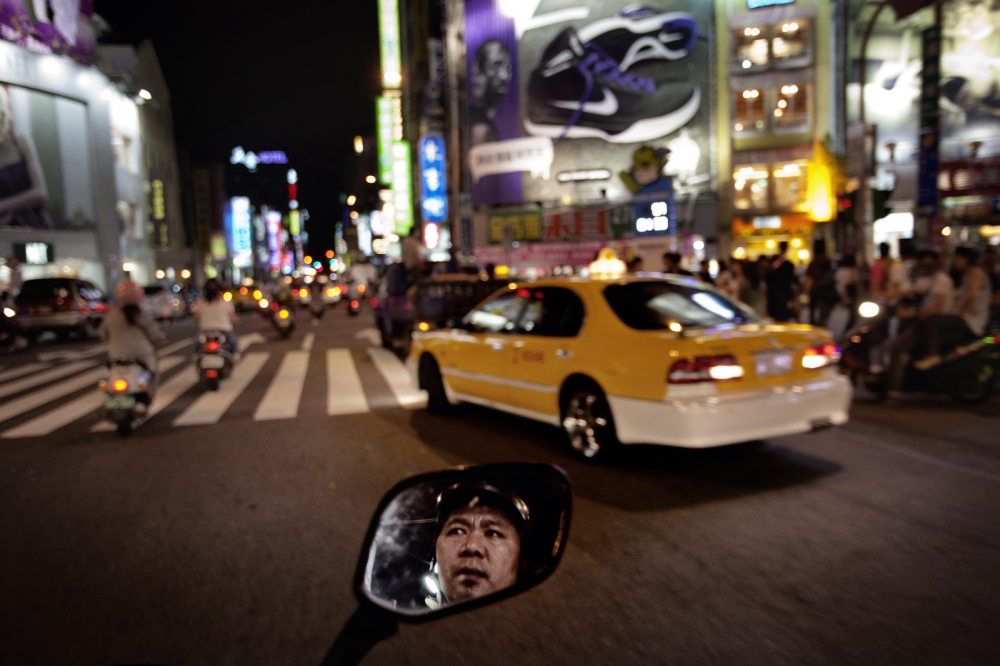 Samten Dorjee an exiled Tibetan in Taiwan rides his motorbike around Taipei’s busy streets. Samten was born in India and has been in Taiwan for over a decade. Taiwan, July 2009.

During my first trip to Tibet in the year 2000, I could see how Tibetan culture and religion were repressed in their homeland. I came back with a sense of sadness and disappointment about what I thought was lost forever.  But a few years later, I met a Tibetan family in India who assured me that by visiting their settlement, I would find what I was looking for. So I decided to follow them to Bylakuppe, a refugee camp in Southern India where I discovered how the refugees were able to uphold their culture.

For the last 10 years I have been documenting Tibetan refugees in several areas of India (Himachal Pradesh, Karnataka, Sikkim, Darjeeling, Ladakh, Bodhgaya), Nepal, Taiwan, US, UK, France, Switzerland, Italy, Belgium, Holland and Canada; focusing on their daily activities in the countries where they now live and the deep intimacy of their private lives where they continue to practice and honor their Tibetan beliefs.

My goal is to unite visually, the Tibetans in exile who are now displaced all around the world, living in limbo, in a unique de facto state. With a Prime Minister and a government that no country in the world recognizes; an official language and their own medicine, symbols, calendar, and, above all, their spiritual leader, the Dalai Lama.

Are you ready, Puerto Rico?

By Albertina d'Urso — 2017 marks the 100th anniversary of U.S. citizenship for residents of Puerto Rico, a Spanish colony for four centuries, which has been ceded to the..
May 8, 2017

By Albertina d'Urso — The favelas of Rio de Janeiro are mostly known for violence and drug trafficking. But, also if those problems still exist, life for most of the..
Jul 6, 2015

By Albertina d'Urso — Along the Mekong China, Burma, Thailand, Laos, Cambodia, and Vietnam are countries that are very different from each other, and are often even in..
Mar 27, 2013