Photographer
briandriscoll.visura.co
Life within 90 km
Follow Hire
Profile
Stories (6)
News (5)
Images (3)
Location: New York
Nationality: USA
Biography:         I am a photographer, a native New Yorker, currently based in New York City. My humanistic interest in documenting stories began after exploring and working in Central America. Soon after I enrolled in... read on 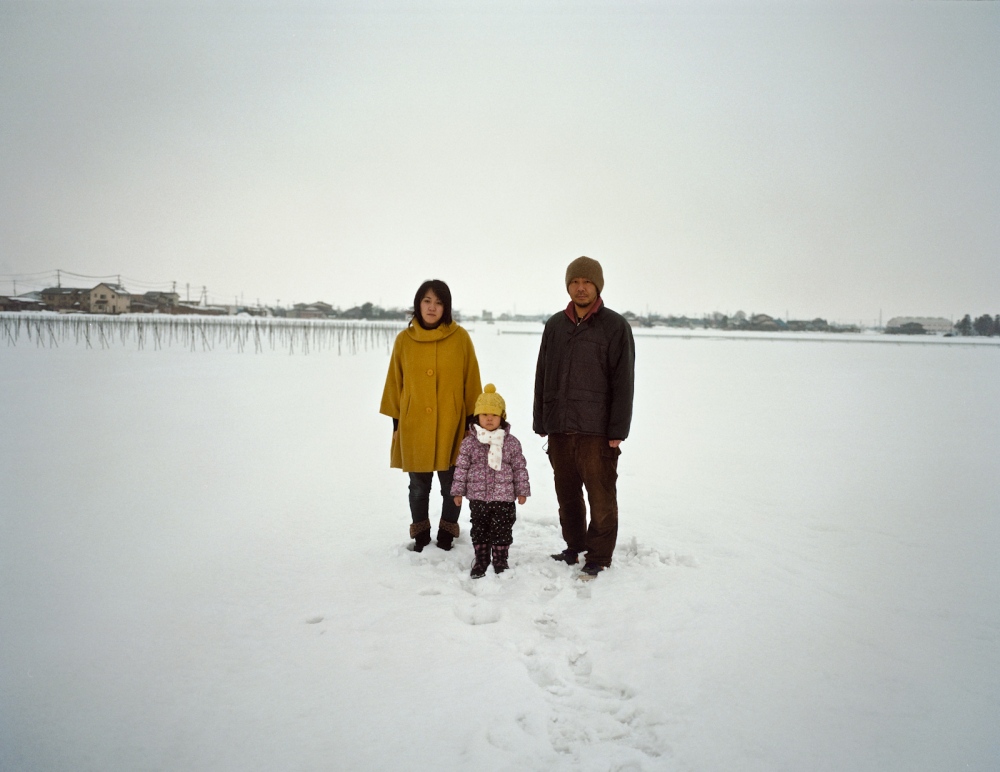 Nozaki and his family stand for a portrait in a snow covered vegetable field in the town of Aizuwakamatsu, Fukushima Prefecture. Nozaki and his wife are not overly concerned about radiation contaminating food and water, but how discrimination will impact the future for their 4 year-old daughter. Feb. 2014 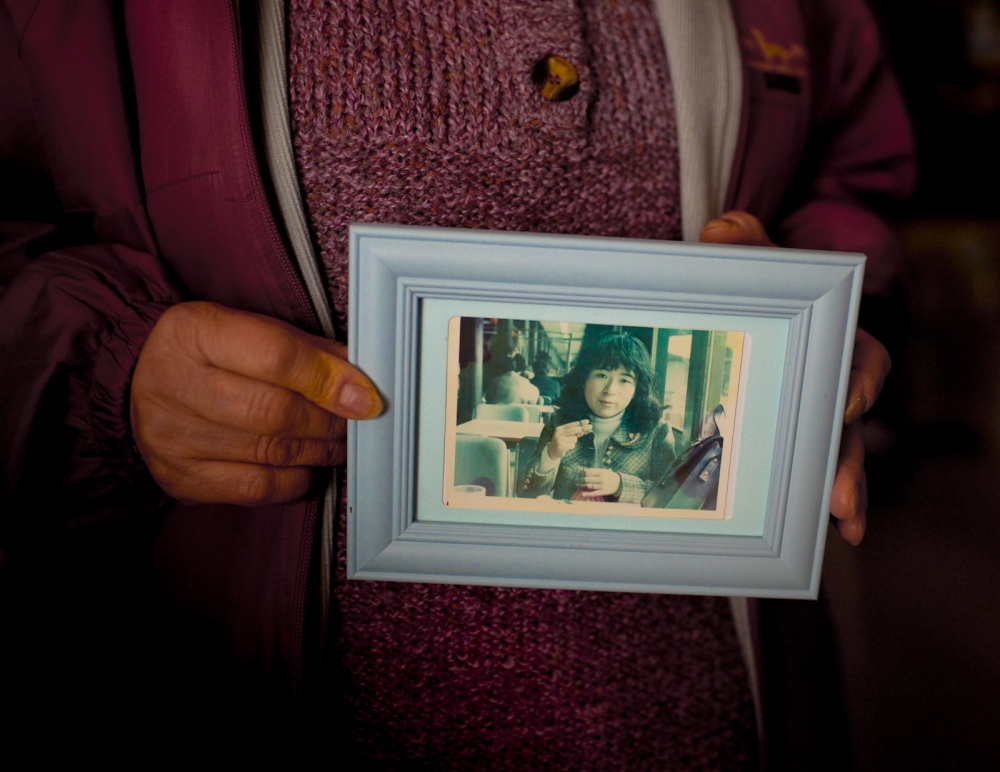 Tokiko Kitazaki, an evacuee from Tomioka-machi, Fukushima. A mushroom and rice farmer a good portion of her life and mother of two, holds an old photograph of herself when she was 25 years old. "Life is different now, things will never be the same," she says. Tomioka evacuee houses, Koriyama, Japan. Feb. 2014 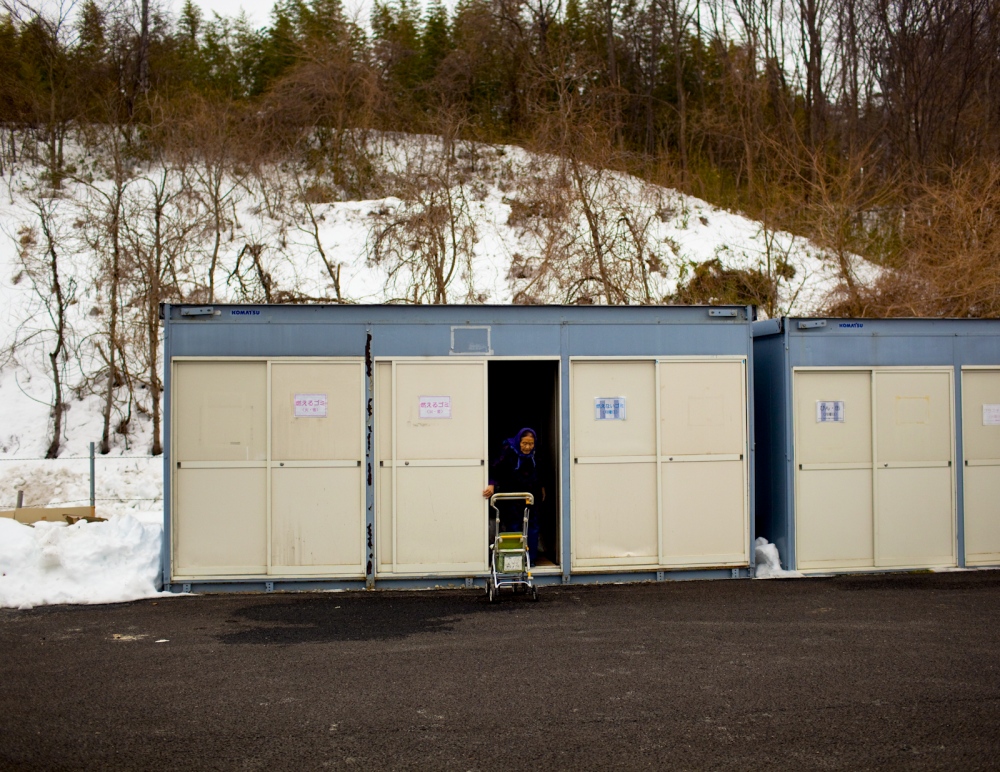 A resident of the Tomioka temporary housing units exits the dumpster after dropping garbage at the complex outside of Koriyama City, Fukushima. Most of the older residents are farmers and have been living there since they evacuated in 2011. Some people have packed a safe bag just in case of an emergency. The temporary housing unit is roughly 60 km west of the nuclear Daiichi power plant. Feb. 2014 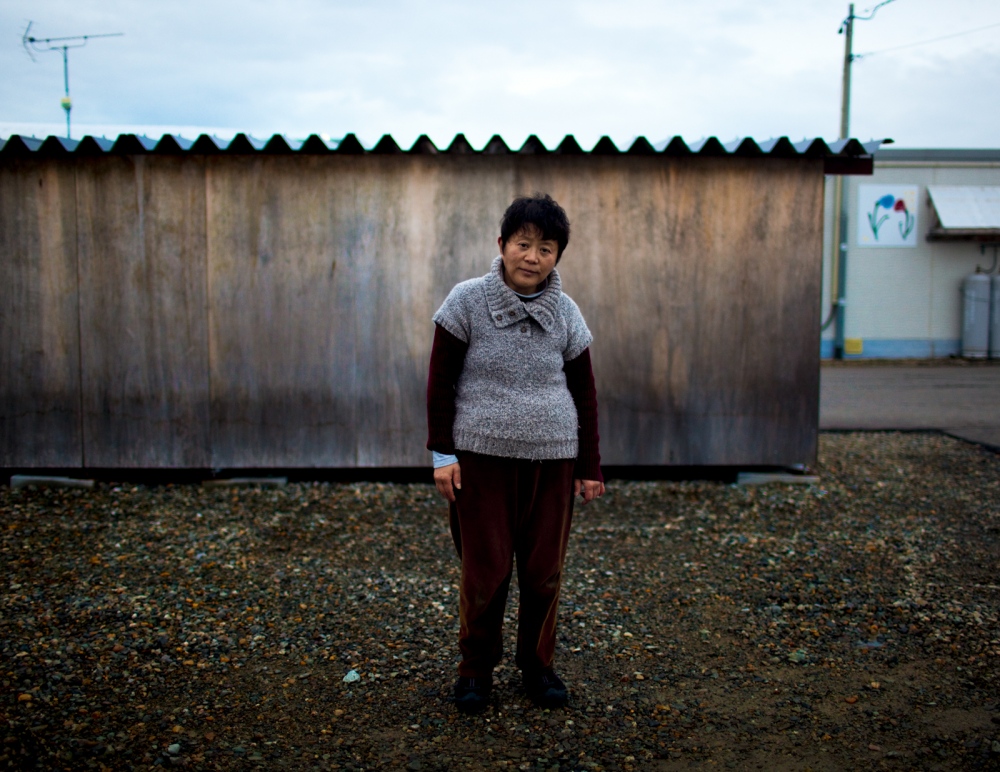 Masumi Kohata, 58, a rice and mushroom farmer since the age of 23, a mother of three and a school teacher from Okuma-machi, Fukushima. A restricted area a few miles from the Daiichi nuclear power plant. Masumi and her husband evacuated from their home in Okuma-machi and have been living at the Matunaga evacuee houses in Aizuwakamatsu, Fukushima, since July 2011. According to Masumi, who was anti-nuclear before the nuclear meltdown, "local government never told the people of Okuma-machi about how high radiation levels were days after the nuclear meltdown and three years later, they are still not providing any important information," says Masumi Kohata. Mar. 2014 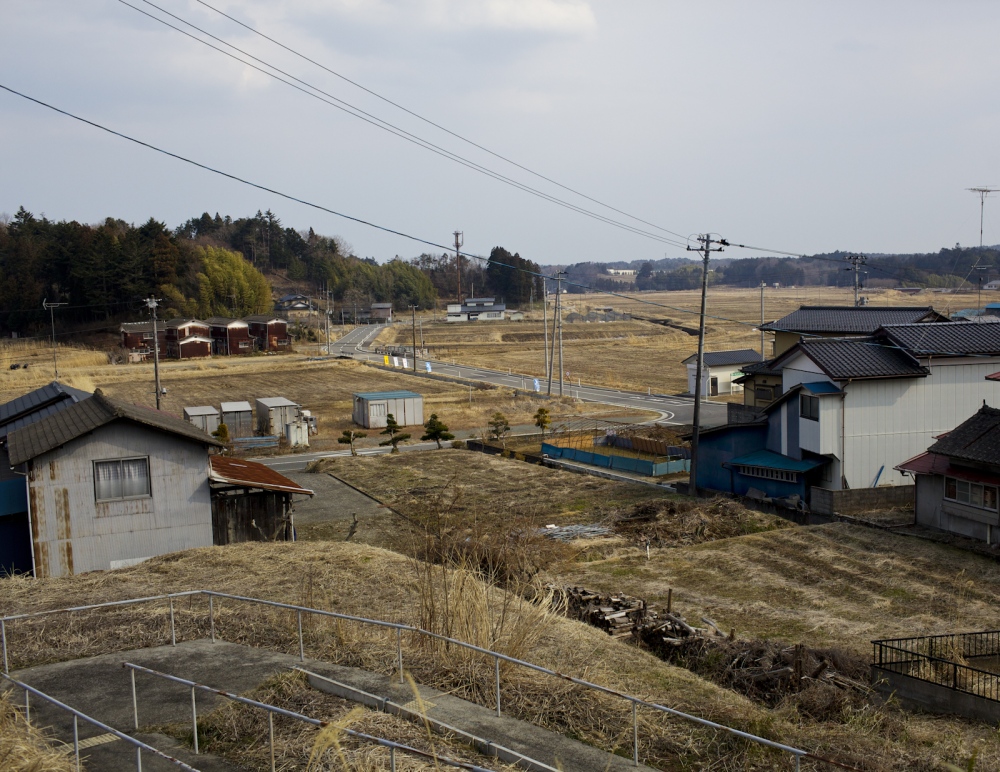 Abandoned homes sit in an empty radiation-contaminated farmland near the Momouchi Station, about 6 miles from the Daiichi nuclear power plant. Mar. 2014 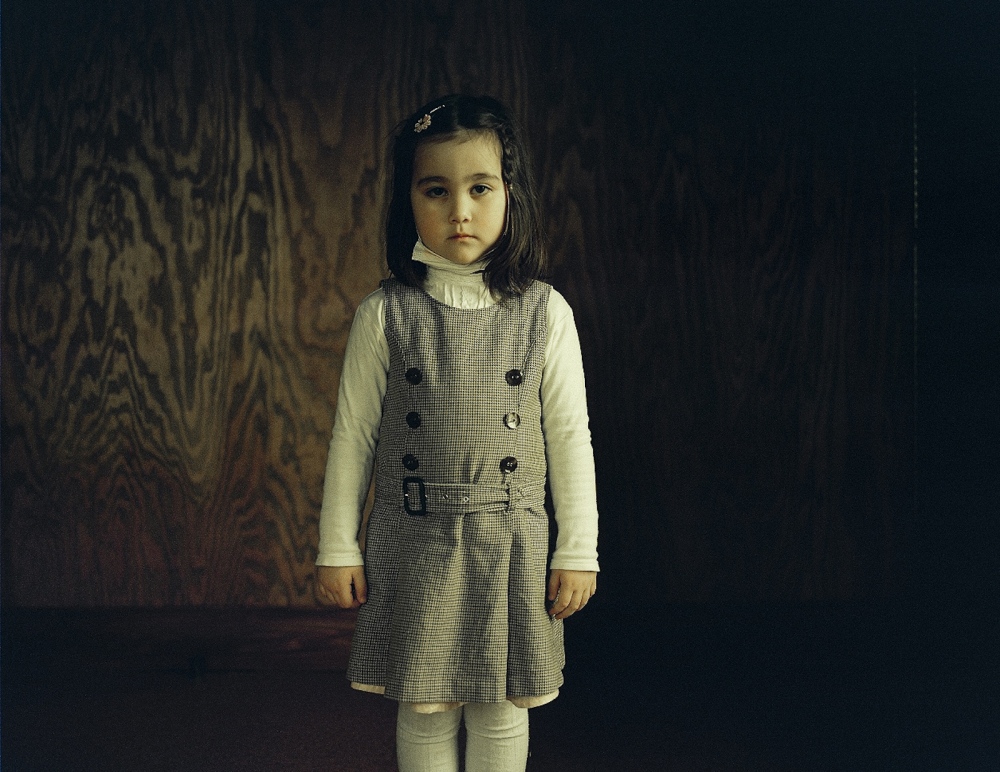 Hannah, 5, stands for a portrait at the Aizu center in Aizuwakamatsu, Fukushima. Hannah and her family are evacuees from Aizu to Fukui prefecture, which is located in the north-central part of Japan. Her mother, who is Japanese and her German father not only fear that radiation levels are too high for children and local government is not telling the truth to the people, but also how discrimination will impact their child's life in the future. Mar. 2014 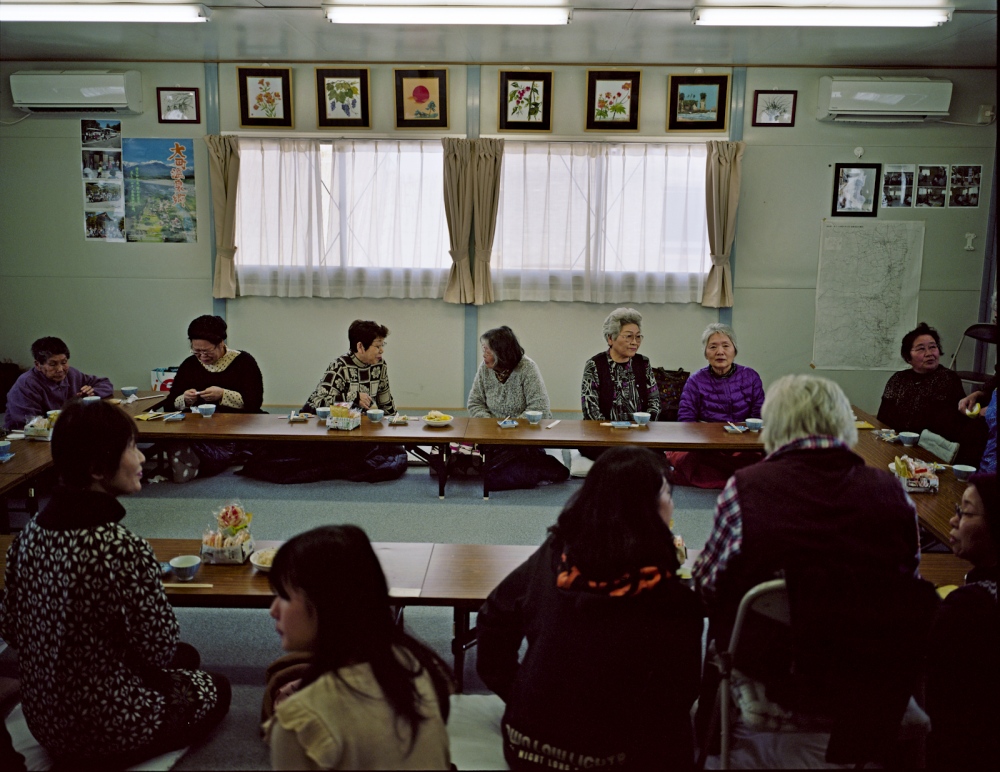 A group of evacuees from Tomioka town, mostly mothers, grandmothers and farmers sit for a lunch gathering and have friendly conversations usually on Saturdays at the Tomioka temporary houses. Outside of Koriyama City, Fukushima. Feb. 2014 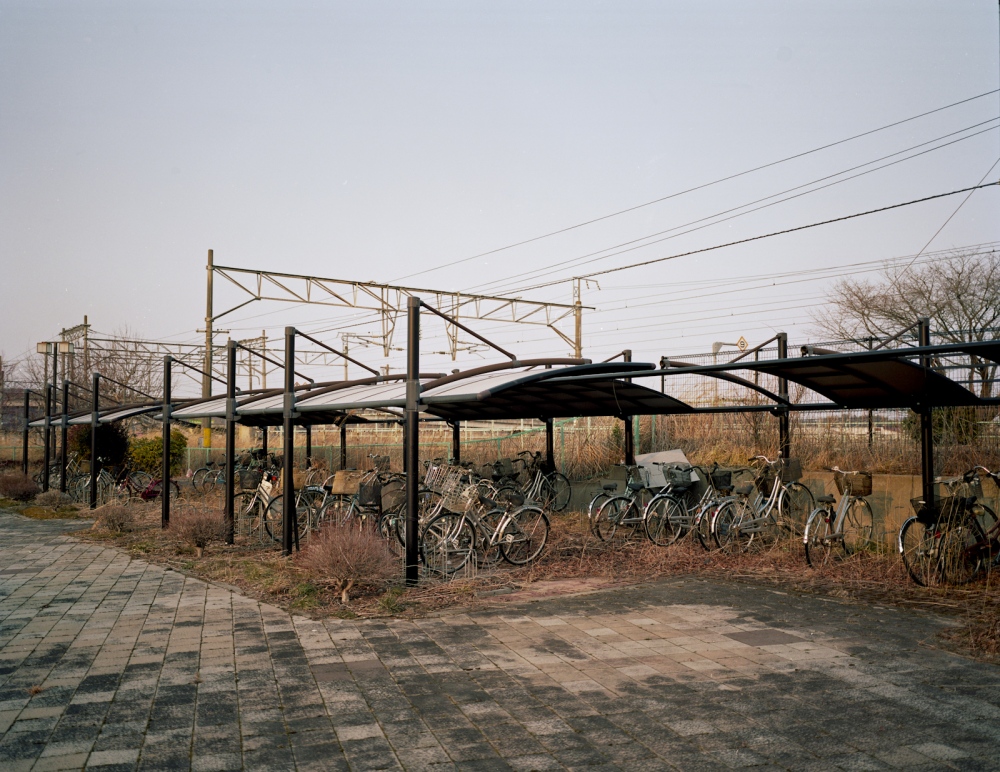 Abandoned bicycles remain as they were left on 3.11.11 at the train station in the town of Odahka, which lies about 6 miles from the Daiichi nuclear power plant. Mar. 2014 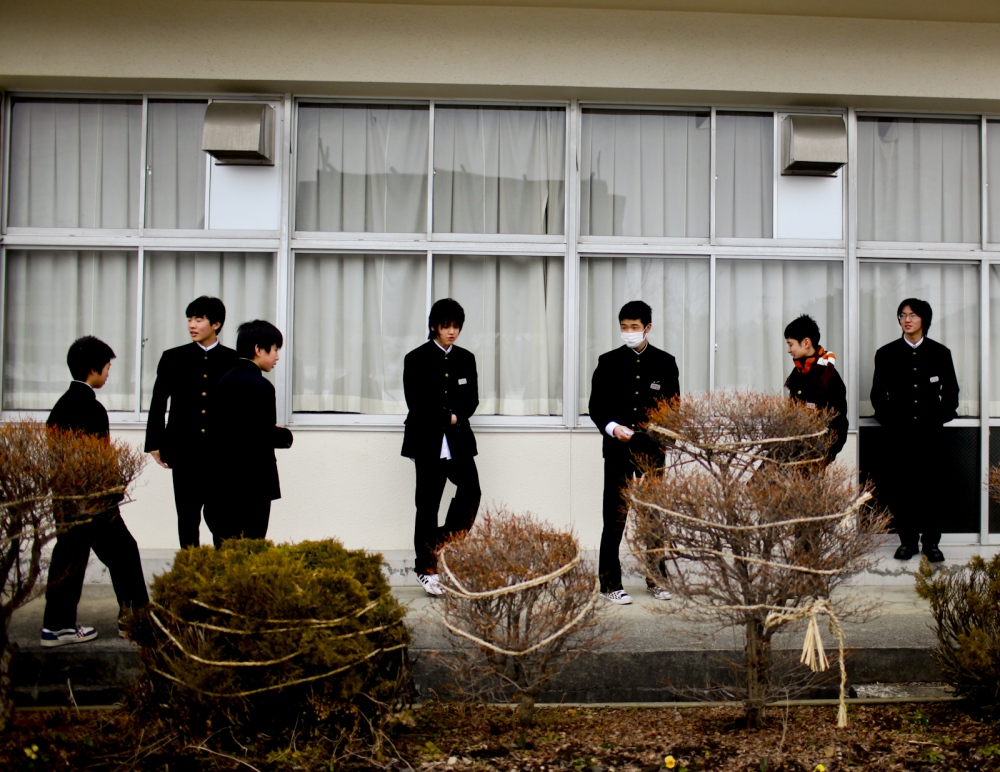 Students hang out in front of a Junior High School after graduation in the Onuma disctrict of Aizumisato, Fukushima Prefecture. There is a constant fear among young parents throughout Fukushima that the government is not providing truthful information about high levels of radiation in areas. Another concern for young families is discrimination against their child in the future. Mar. 2014 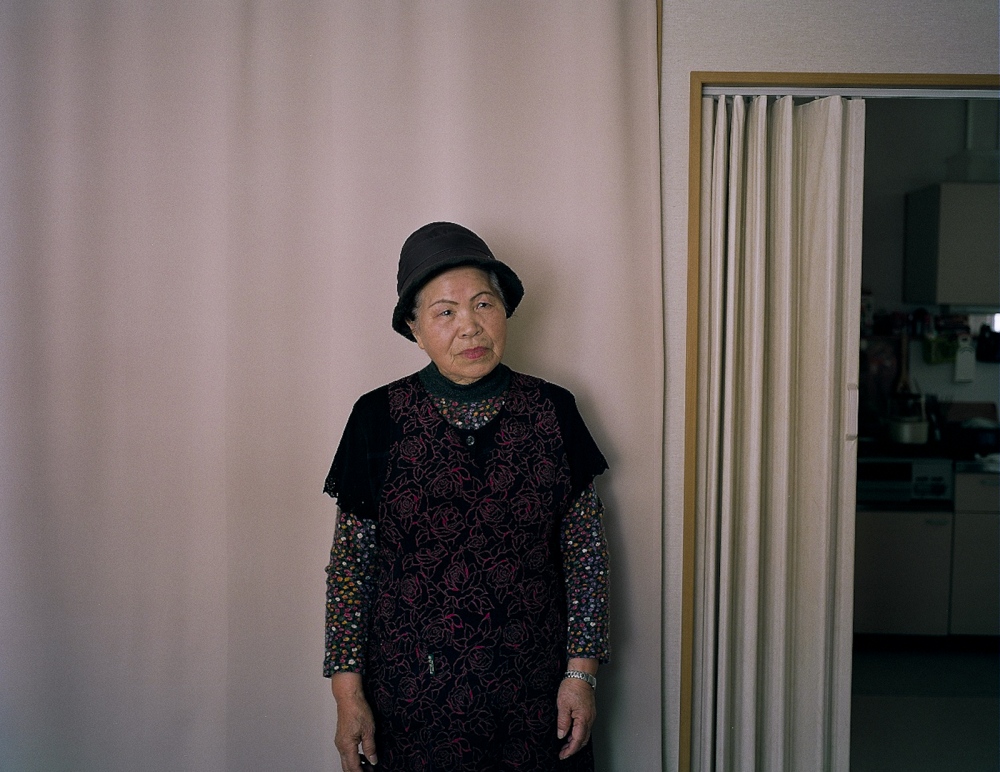 Shigeko Yokota, a vegetable and rice farmer from Tomioka, Fukushima, about 6 to 9 Kilometers from the Fukushima power plant. She did not evacuate for about a month after the meltdown. She has a son, daughter and grandson. Shigeko moved around to 3 different evacuee houses before settling at the Tomioka Houses outside of Koriyama City, Fukushima. Feb. 2014 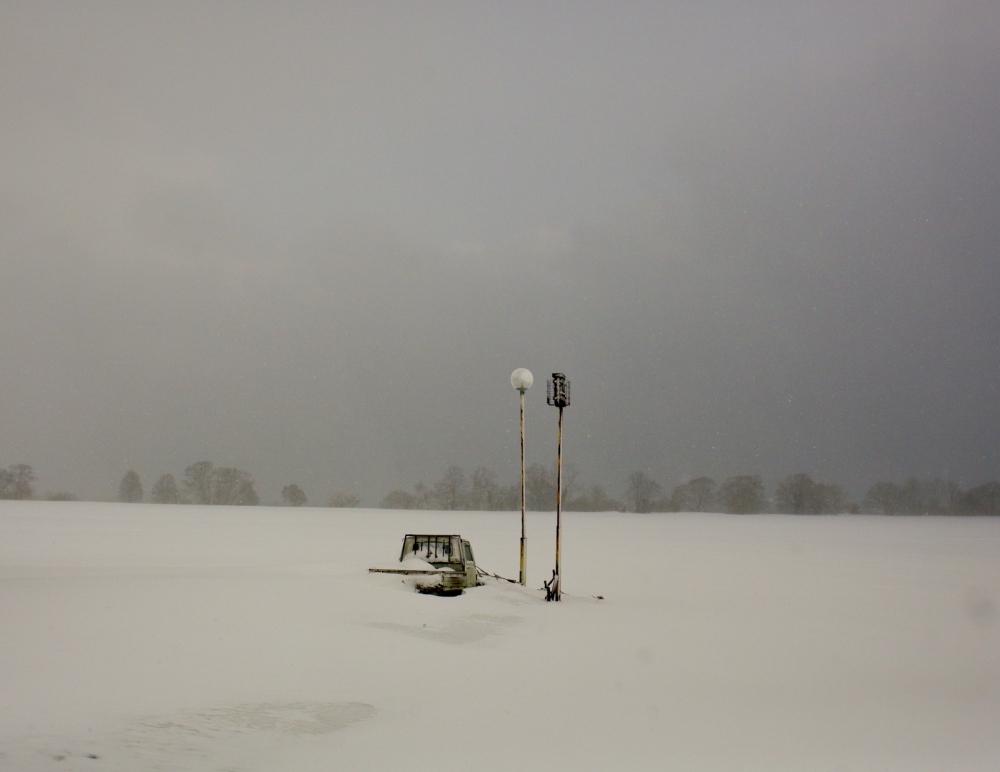 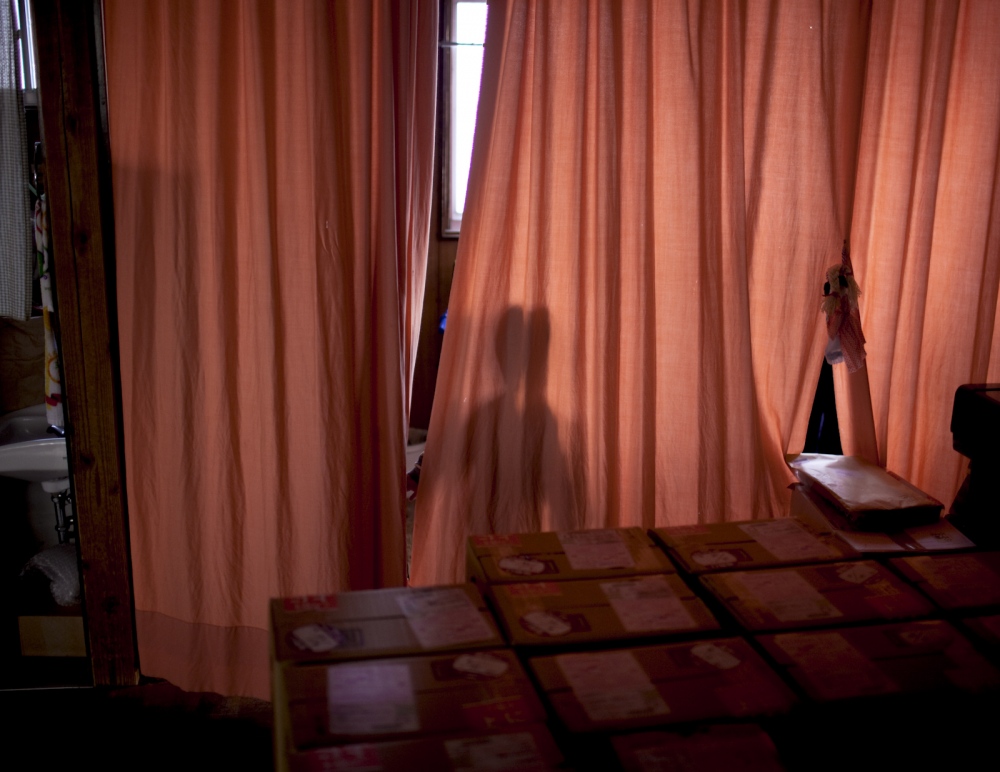 A young child stands in the doorway next to boxes filled with fresh water at the Aizu center in Aizuwakamatsu, Fukushima. There are roughly 20-30 members, mostly mothers who are concerned about future effects from radiation as well as discrimination. The center is run by Terumi Kataoka, an anti-nuclear activist along with her husband and two sons. Each member of the center receives fresh water, fruits and vegetables monthly from donations outside of Fukushima. Mar. 2014 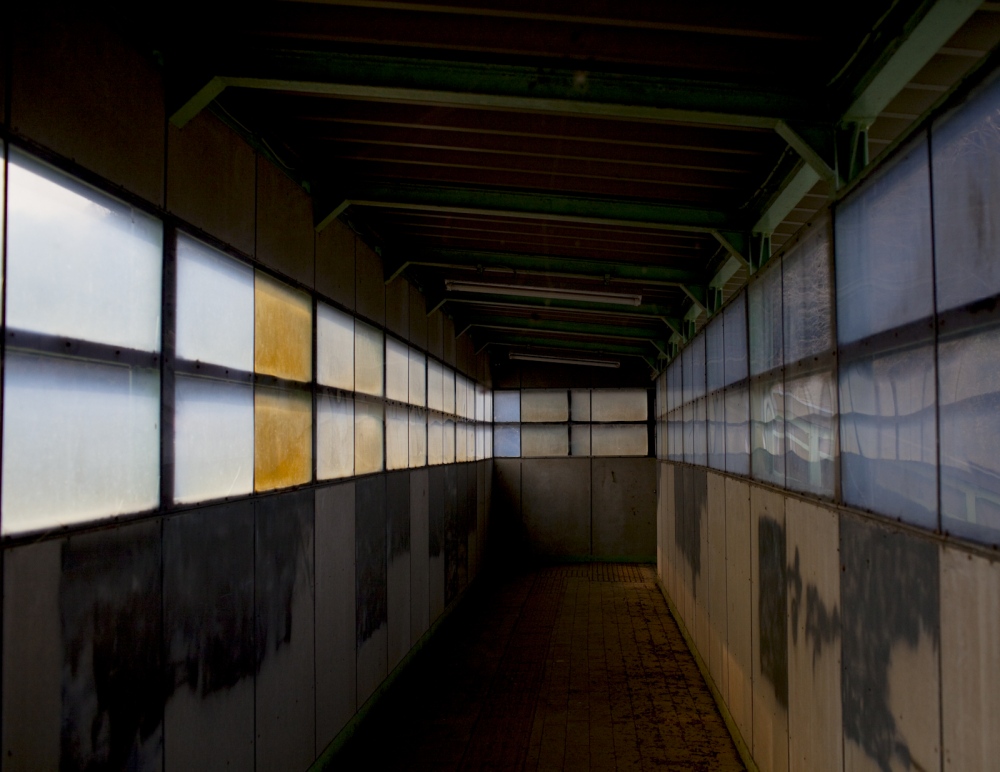 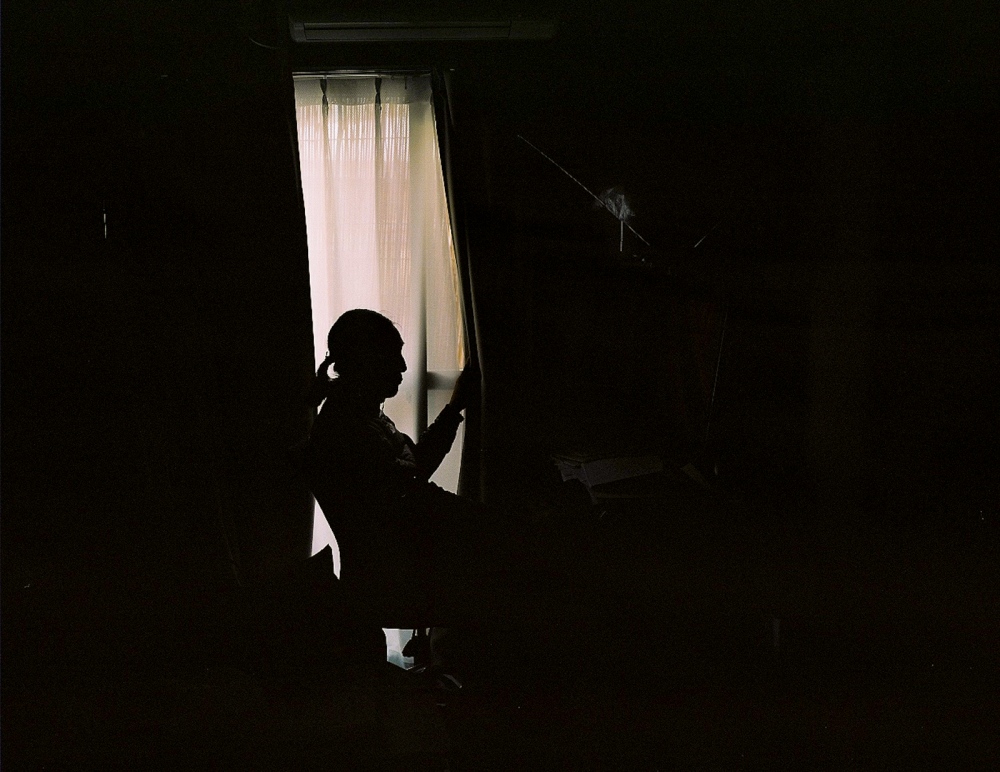 Hajime Fujita, a former mailman at a post office from Tomioka, Fukushima. He has been living at the Tomiko evacuee complex in Koriyama City, Japan since July 2011. He is very uncertain about the next few years, " I feel I will be living here the rest of my life," he said. Tomioka is about 6 miles from the Daiichi nuclear power plant, an area that is unsafe due to high levels of radiation. Feb. 2014 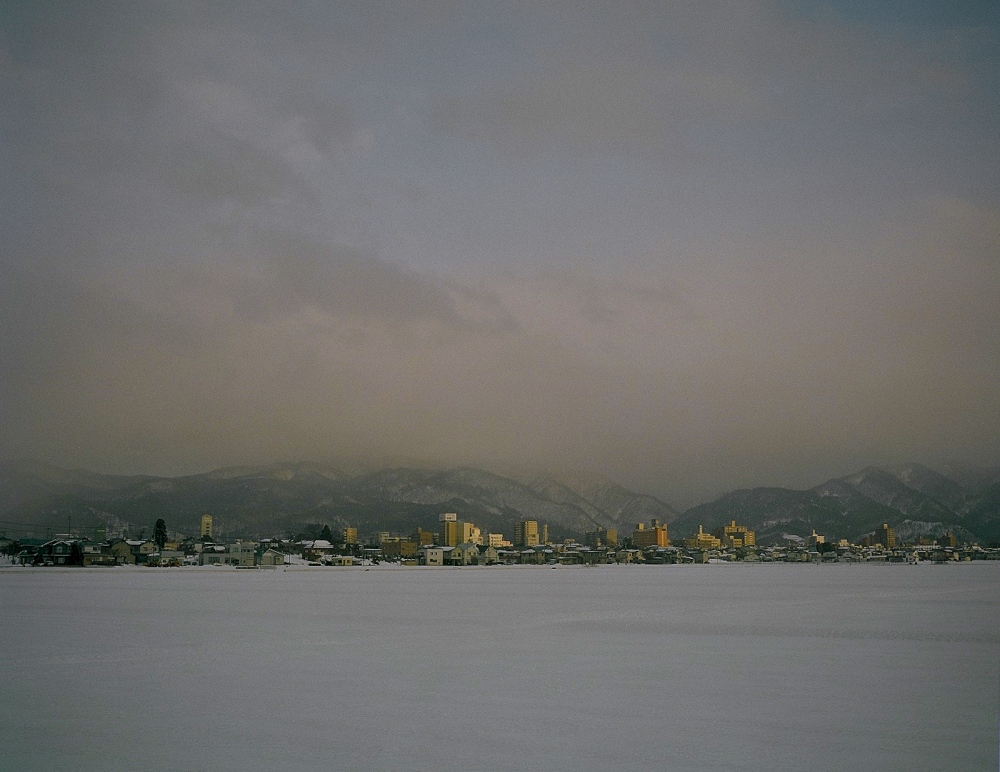 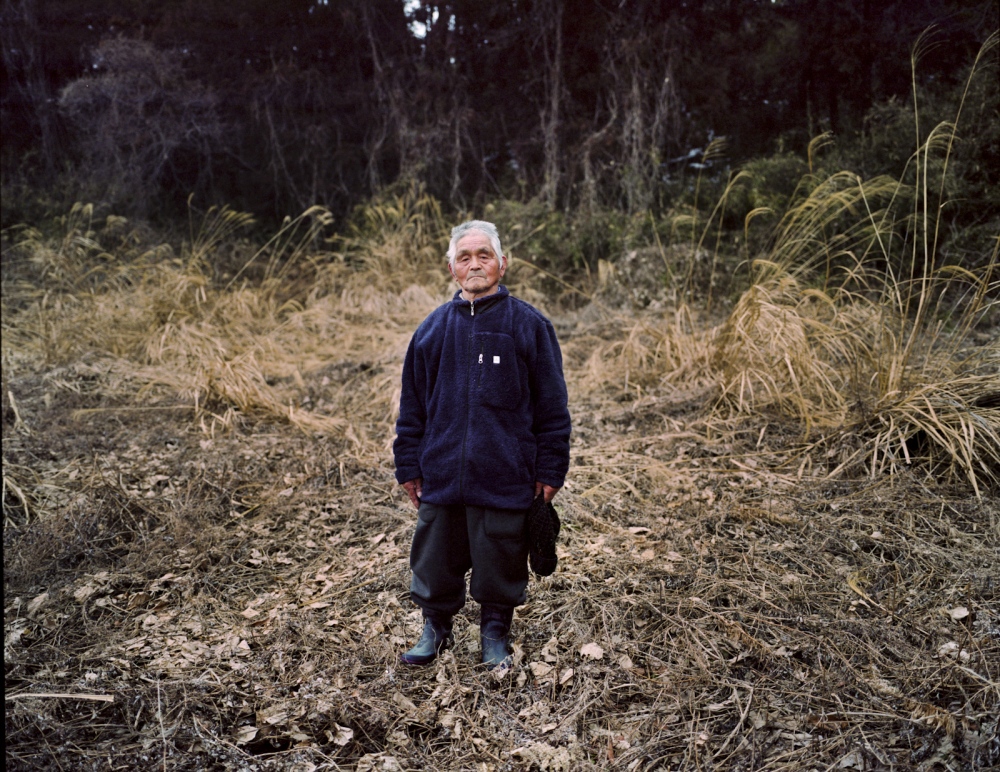 Kinjira Kajida, a mushroom and rice farmer from Kawauchi, Fukushima, has been living at the Kasetu-jutaku housing complex in Koriyama since Mar. 2011. Since the nuclear meltdown he and his son who also was a farmer can no longer provide from the farm and the family has split apart. His son, daughter and grandchildren are living in a suburb outside of Tokyo. "Many people have not received any compensation yet," he says. Kawauchi, Fukushima. Feb. 2014 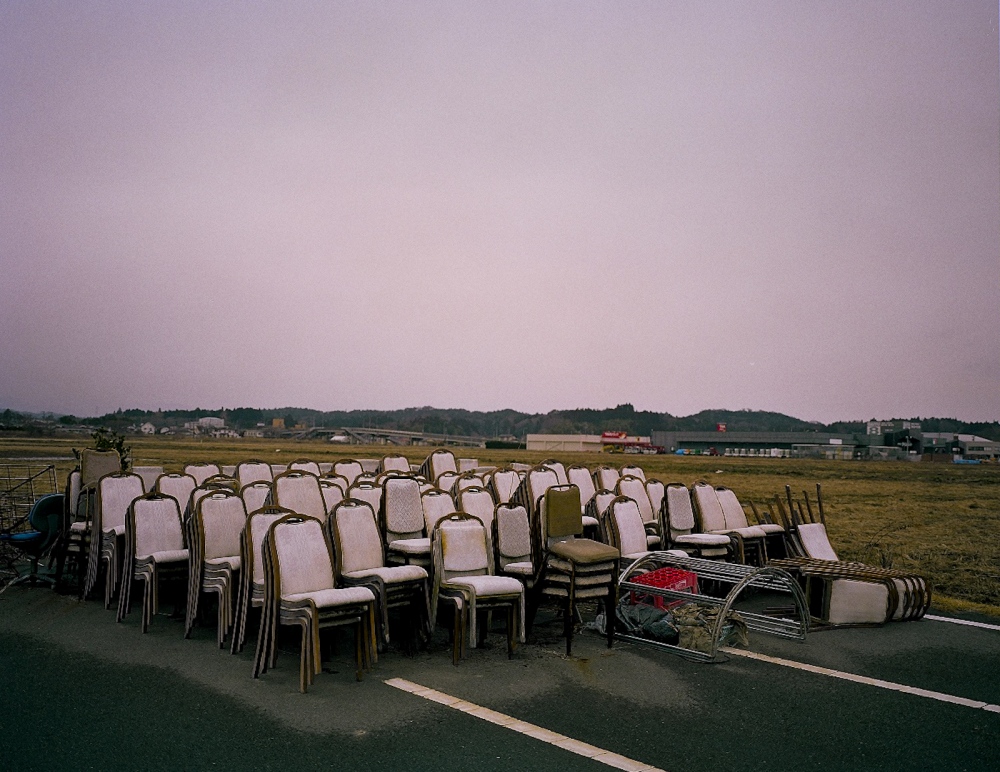 Abandoned chairs from a celebration hall sit in an empty parking lot in the town of Odaka town, Minamisoma, about 8 miles north from the Daiichi nuclear power plant. Mar. 2014 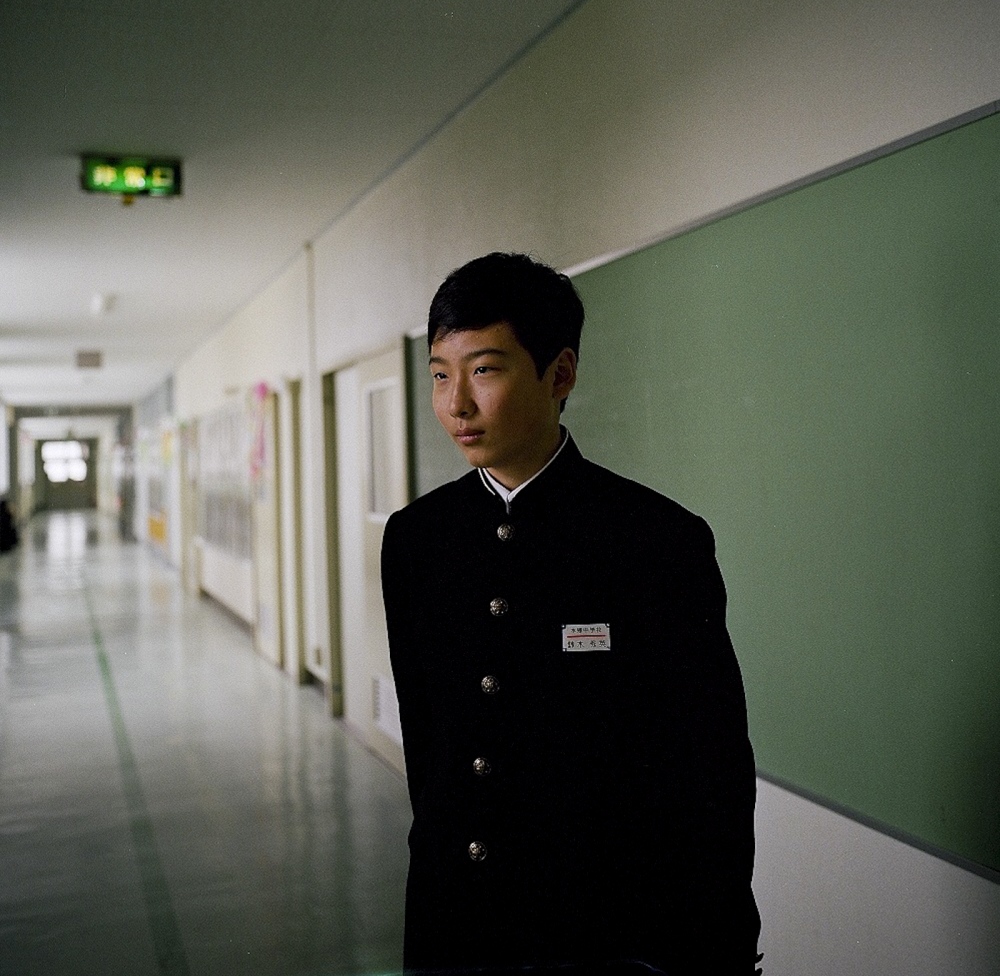 A young student stands for a portrait at a Junior High School after graduation in the district of Aizu. There is a constant fear among young parents in Fukushima that the government is not providing important information about hotspots of radiation. Another major concern among young families is discrimination, and how it will impact their child's life in the future. Mar. 2014 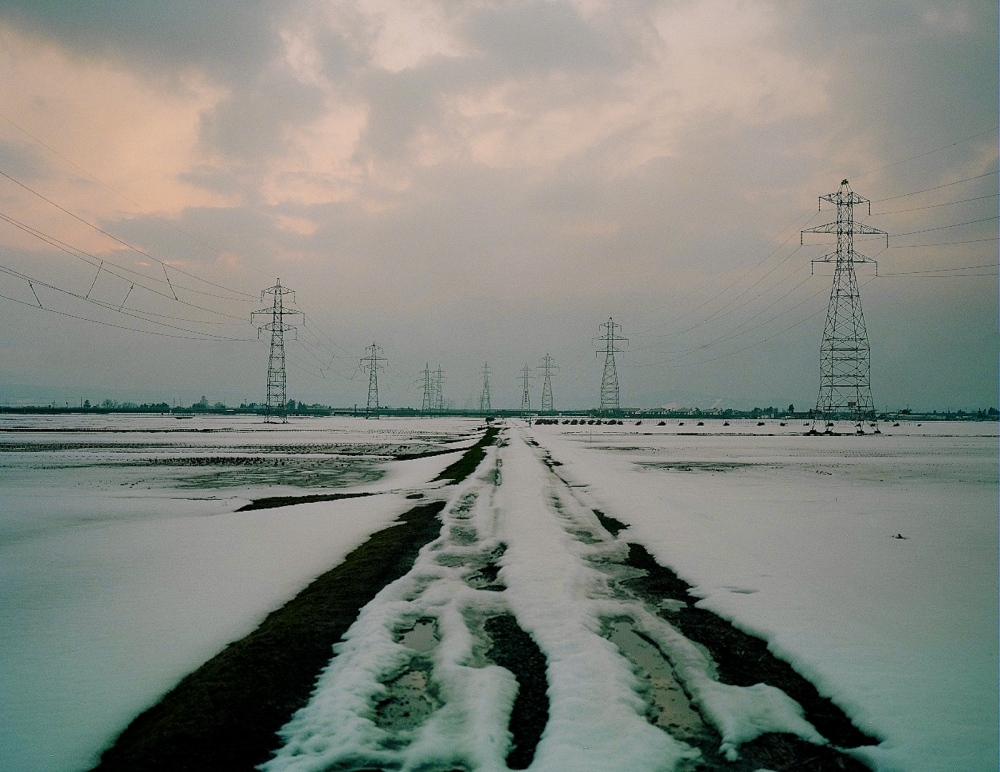 Electric towers line the landscape of a snow covered sea of rice fields outside of Koriyama City, Fukushima Prefecture. Residents fear the food chain is contaminated due to the onshore wind patterns that create hotspots of radiation in the mountains where rain water finds its way down to rice and vegetable fields throughout Fukushima, Japan. Mar. 2014 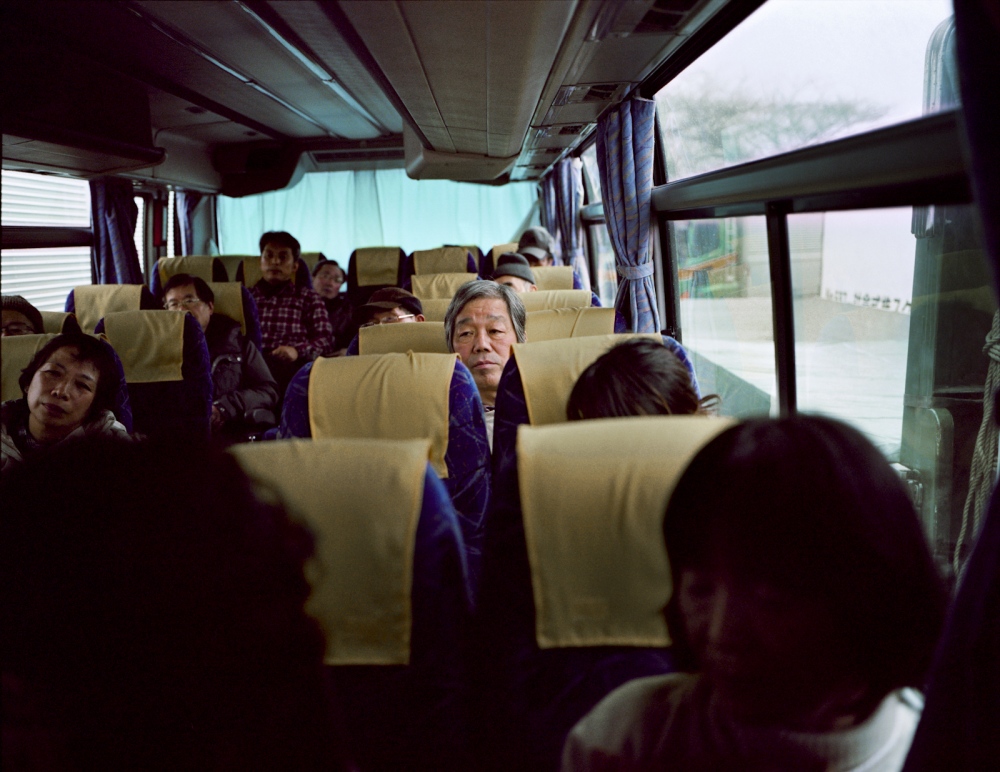 A group of evacuees, mostly farmers and small business owners are en-route to a huge rally in Tokyo from Fukushima. People continue to tell their stories as victims and push ahead for the truth against government official almost three years after the man made nuclear catastrophe. Mar. 2014 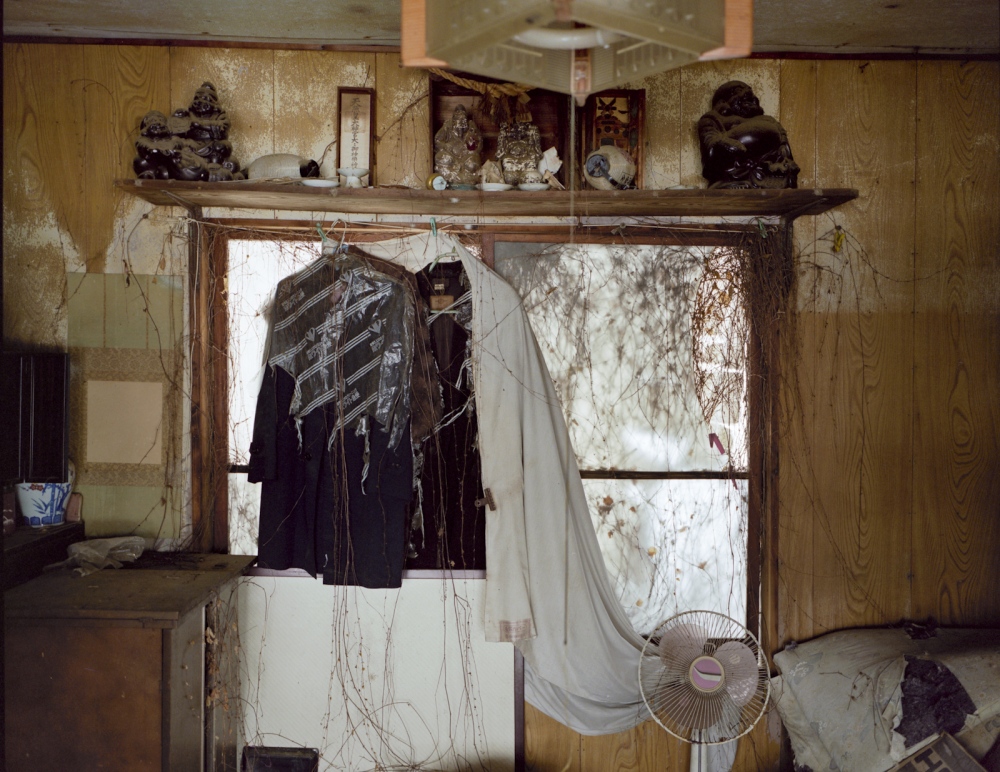 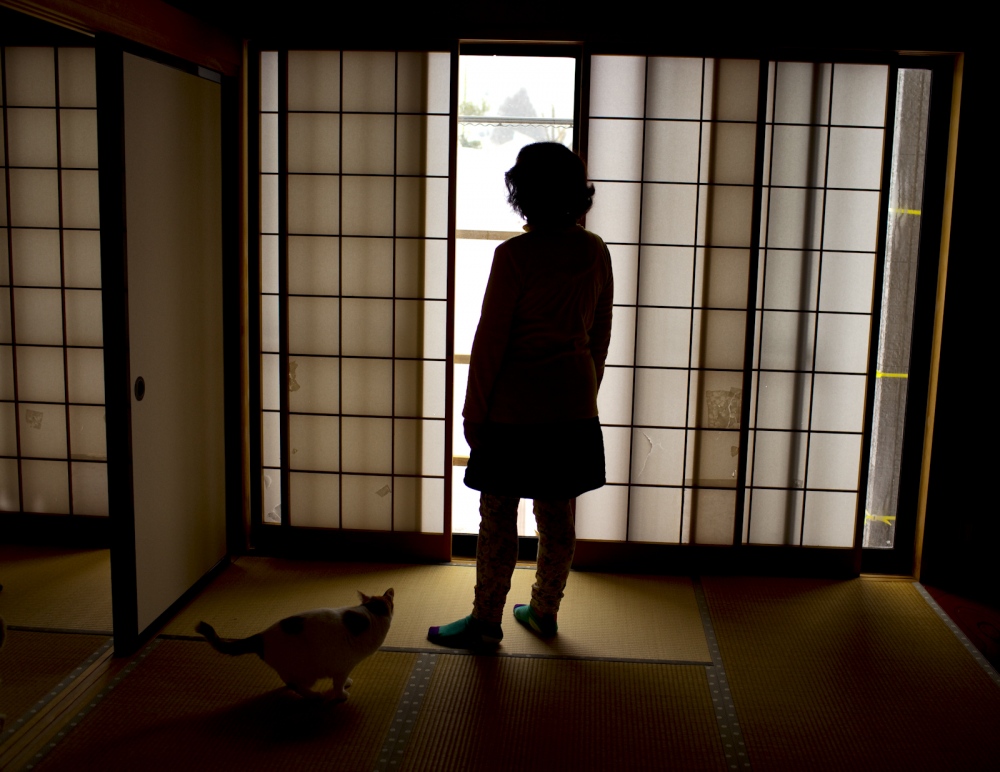 Kazuyo Sekiba, an evacuees from Nami-machi, roughly 24 km from the Daiichi nuclear power plant. Kazuyo and her husband moved to 6 different evacuee houses around Fukushima before finding an affordable apartment house outside of Koriyama city. They currently live off of compensation by the Tepco electric company, but are very uncertain about the future as Kengi lost his job as a transport driver and his compensation will eventually be cut. They were not notified to evacuate the area where they lived in Nami-machi, until May 2011 and were not provided any information by local authorities. When they were evacuated, they were allowed to bring 3 cats with them. They occasionally go back to survey damage to their property and use to care for their animals they had left behind. Mar. 2014

Public Story
Life within 90 km
Credits: brian driscoll
Updated: 05/11/15
Location: Fukushima, Japan
Archived as:  Abandonment, aftermath, fukushima, envvironment, people, community, radiation, portraits, landscape, Documentary, Family
In 2012 I traveled to Fukushima to visit a good friend of mine in Aizuwakamatsu, Fukushima along with my wife, who is Japanese. During my time there, we made our way around Fukushima, visiting many areas that were devastated by the earthquake and tsunami. Trying to understand the magnitude of what took place in Fukushima was very difficult. I had no desire to photograph the devastation nor work on any kind of project while I was there. We spent time meeting and talking with local people who were deeply impacted and concerned about the consequences of radiation. I started to grasp an understanding of how many issues that were unfolding and how the lives of so many have been affected from the meltdown, not only in and around the exclusion zone but up too 90 km away from the power plant. It was then that I realized I would return one day with an attempt to focus on telling some of the stories of the people.

Fast forward to February of 2014, I returned to Fukushima for six weeks with a goal to uncover some of the untold stories, stretching from Namie to Aizuwakamatsu, Fukushima. A few days after arriving to Japan, I connected with the Aizu center in Fukushima, which is run by Terumi Kataoka. The first week or so, I found myself sitting and chatting over tea and snacks with residents from all over Fukushima. Many individuals from the Aizu center wanted to be heard, but not necessarily photographed. Everyone had a story to tell. For some however, it seemed they did not want to believe that anything has changed. As I photographed individuals, language and cultural barriers would often be challenging at times, though making a humanistic connection was very gratifying and a humbling experience. Quite often, I would return to the same place few days later. The purpose of this work is to shed light on some of the forgotten stories of residents throughout Fukushima three years later. These stories are about the people of the communities, families, strength, and the land.

As restrictions have been lifted in some areas of Fukushima, just outside of the no-go zone, many older residents that are deeply connected to their land will return. However, younger families with children are not so eager to return home due to the lack of information provided by the government. Some of the hardest things for people to deal with is the fact that no one has taken responsibility three years later and not trusting what the government is saying, especially after hot spots of radiation have been reported several levels higher than normal in populated areas that was considered to be safe. Residents of Fukushima find it disturbing that the government and Tepco are downplaying the situation and are encouraging residents to continue living in contaminated areas.

By Brian Driscoll — Completed in 2014 with a grant/fellowship from The Rita and Alex Hillman Foundation Healthcare in general can be quite a challenge and struggle for..
Feb 23, 2016

By Brian Driscoll — For this project, I felt inspired, but more so compelled, to create a visual photographic record of people who strive to live a life of freedom but..
Jun 17, 2015

By Brian Driscoll — Oda is a small rural town tucked away in the mountains off the narrow, twisting roads of Uchiko, Japan, roughly an hour away from Matsuyama. A town..
Jan 12, 2014

Prisoners of a Revolution

By Brian Driscoll —  "Political Prisoners of a Revolution" is an ongoing project that explores the lives of Egyptians who had experienced extensive prison..
Dec 10, 2012

By Brian Driscoll — The " Komi Land " is a series of photographs that reflect the daily lives of forgotten Germans who were exiled to the Komi Republic, Russia during..
Sep 7, 2011