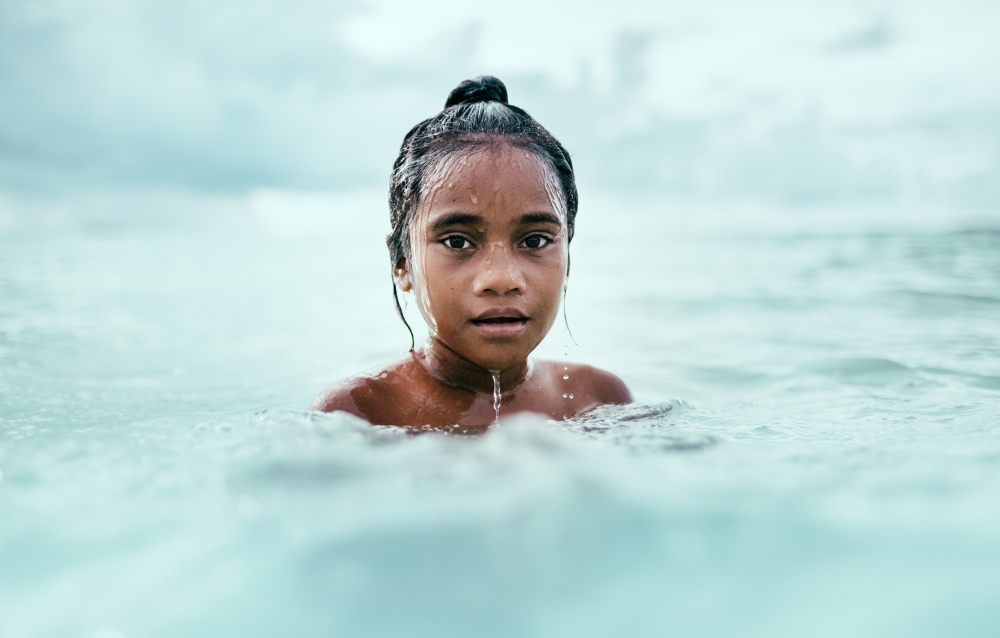 1 of 22 © 2021 Forest Woodward
An unusual shape cuts through the water towards me in the fading sunset. I stop walking and watch as the silhouette comes closer and closer, until it is only a few paces in front of me at the water’s edge. I realize it is a child, maybe eight-years-old, her right arm held high, straining under the weight of a fish over half her size. A tremendous grin spreads across her face as she deposits the fish on a burlap sack and proudly proclaims, “My father is going to teach us how to scale it!" She melts back into the water towards the shadowy silhouettes of her father and sister. 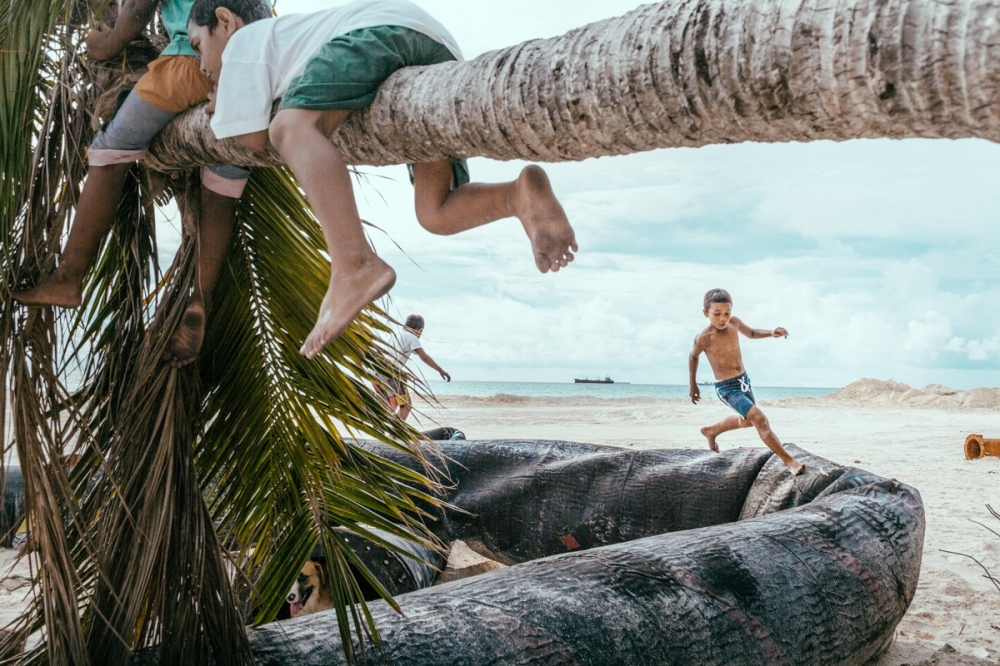 2 of 22 © 2021 Forest Woodward
Tuvalu's nine islands have a total land mass of 26 km², making her the fourth smallest country in the world. The mean height above sea level is less than two meters. Because of Tuvalu's small land mass and vulnerability to rising sea levels, it has been identified by the United Nations as the country most at risk of losing sovereignty due to climate change. 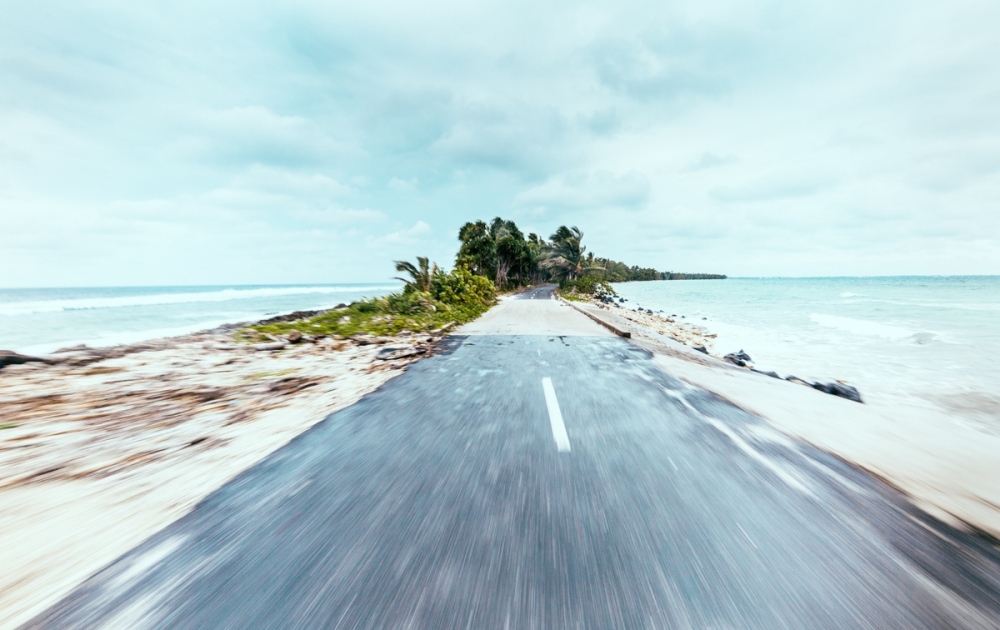 "You people run when you see waves. We have nowhere to run. No mountains, no tall buildings," says a local reverend on Tuvalu's capital island, Funafuti. "We run to the other side and there is the lagoon, and more waves. There is no escape. We don't know where to go.” 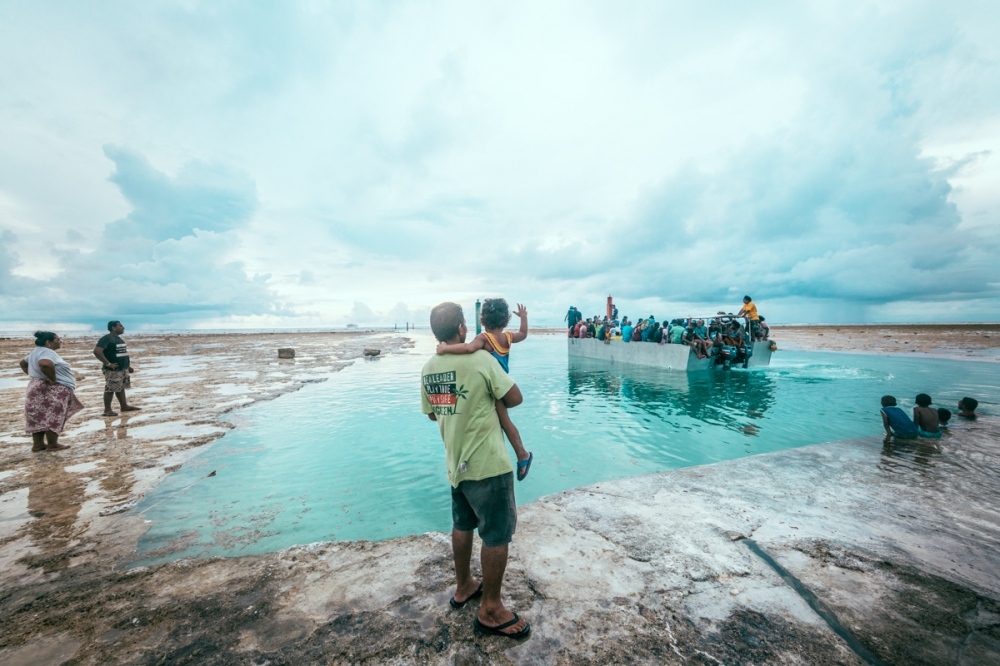 4 of 22 © 2021 Forest Woodward
The first Polynesian outriggers are thought to have brought early inhabitants to the archipelago that is now Tuvalu some 3000 years ago. Sustained by an intimate knowledge of the sea, and by the harvest of fish and coconut, Tuvaluans lived a life of relative abundance on these islands for thousands of years. Now faced with rising sea levels and a warming climate, a younger generation of Tuvaluans will be forced to consider the possibility of another migration. A migration that is not of their own choosing, but rather, is made necessary due to changes in our climate that are rendering their ancestral lands increasingly dangerous and difficult to inhabit. 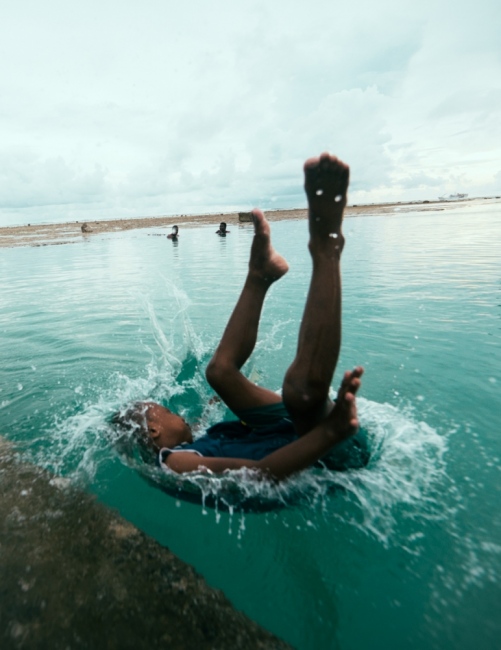 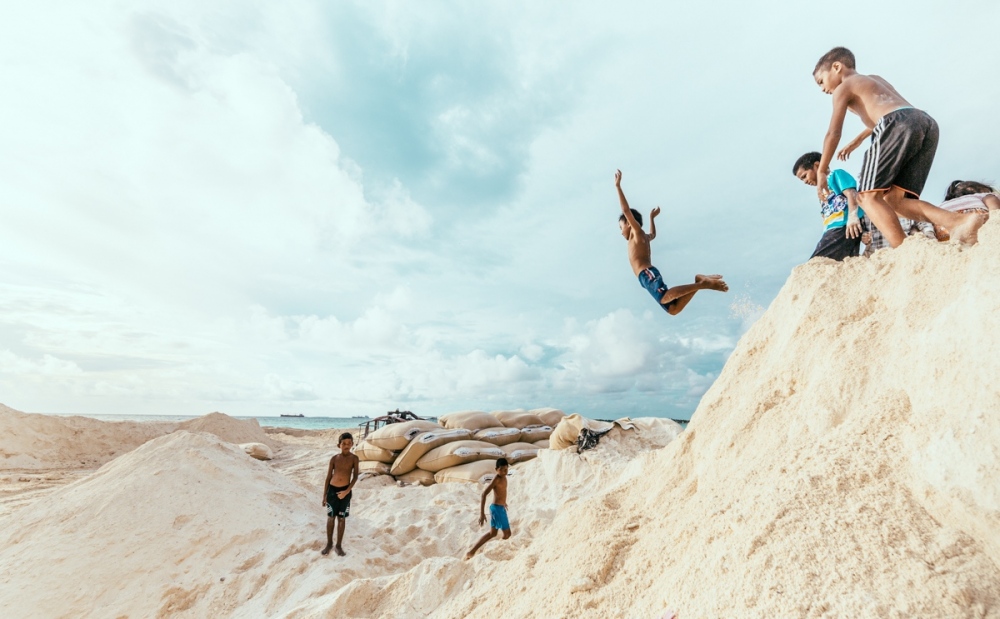 6 of 22 © 2021 Forest Woodward
Tuvaluan youngsters investigate new terrain deposited by dredging machinery. The highest point on the capital island of Funafuti varies by who you ask, and when you ask them. When we first arrived on the island it was a newly deposited pile of sand on the beach in front of the lone hotel. Later in our visit, after the pile of sand had been shortened in stature by the trampling feet of many children and occasional bulldozers, we found the new high point to be a pile of rusted machinery that the US brought to the island during WWII. Regardless of who you ask or where you stand, at any given time, you are never likely to be more than a couple meters above sea level in Tuvalu. 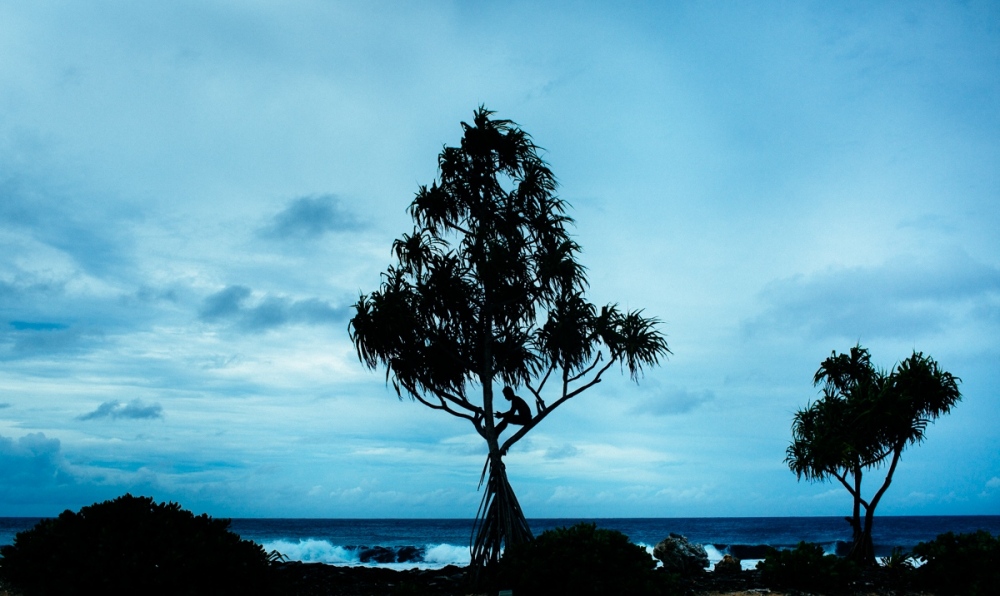 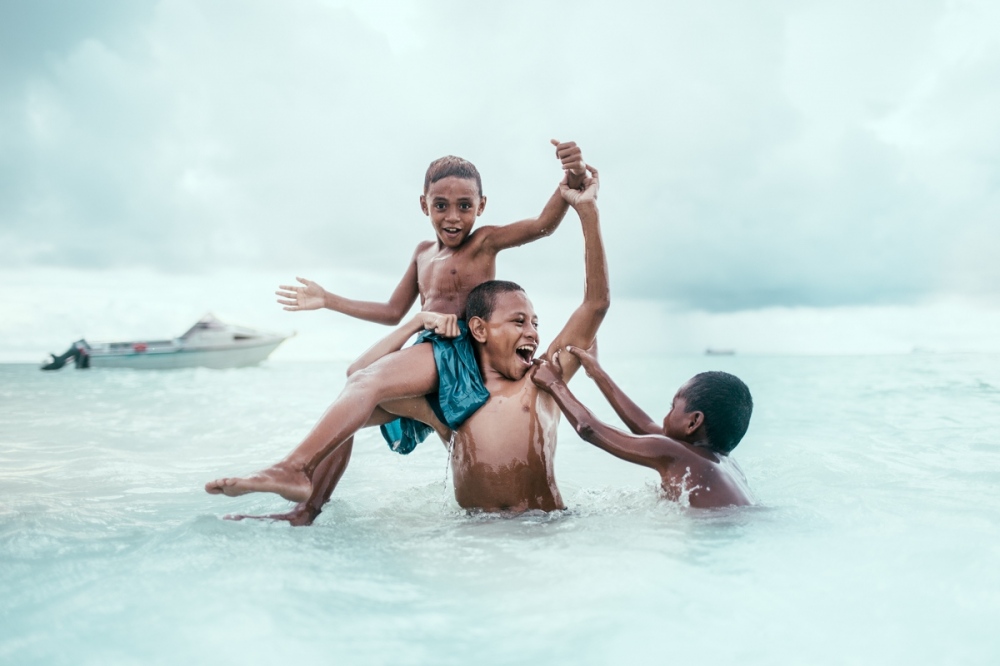 8 of 22 © 2021 Forest Woodward
The beauty of this particular pack of children lies in their wild movement. At once erratic and choreographed, there is an ease with which they flow in and out of the sea. Mischief glints in eyes and high rollicking bursts of laughter roll out over the lagoon. The precariousness of the children’s carefree existence is less clear, but hangs over the beach, omnipresent like the slow drifting cumulus. 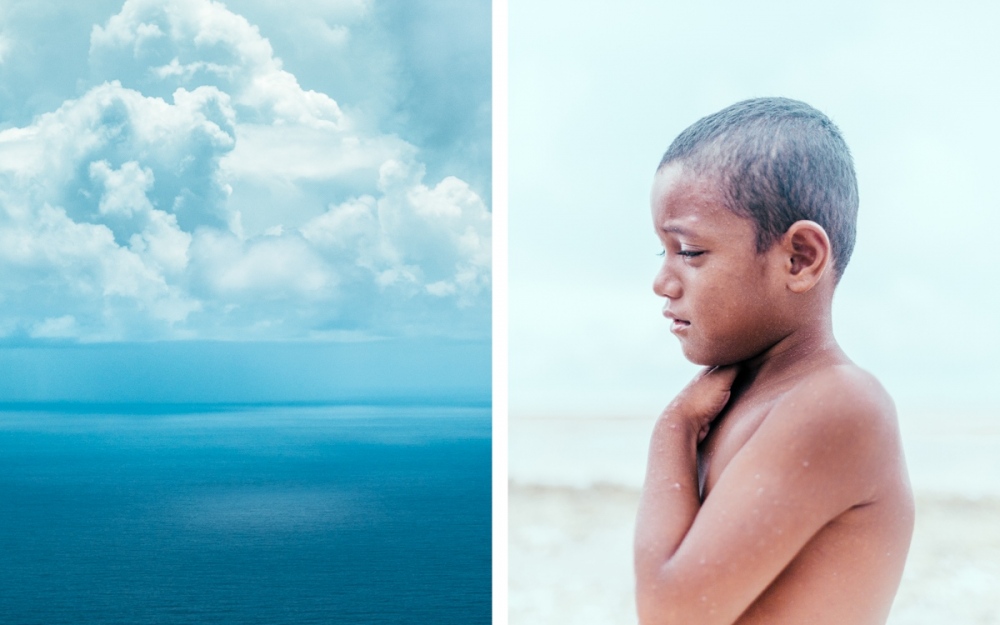 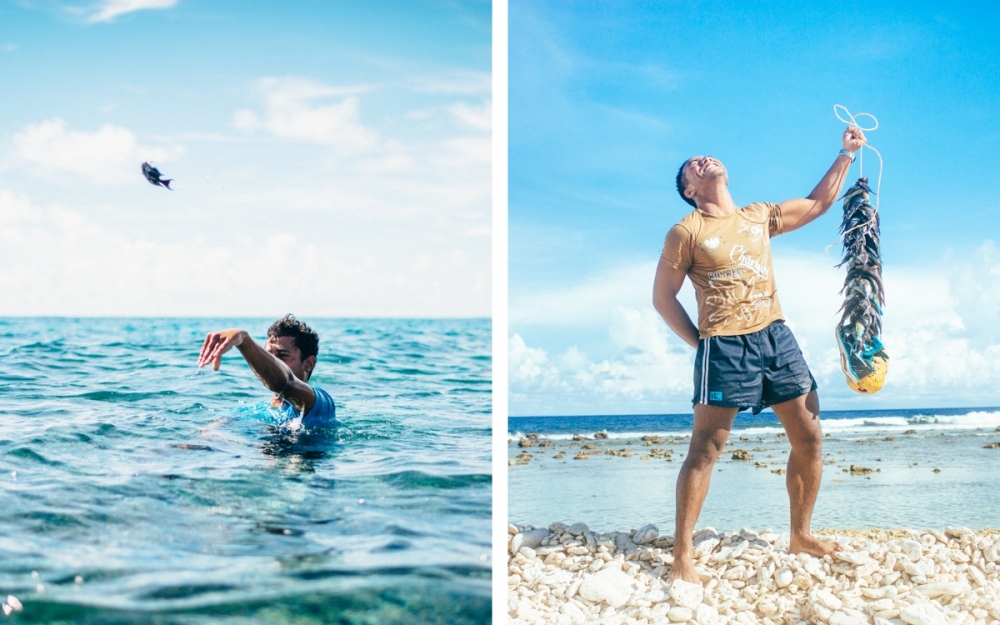 "If given the option to emigrate, will you?" Bernard's face cracks into a wide smile, "No."

To my "Why?" his reply is simple, uncluttered by politics or ambition, honest and full as his smile.

"Because I want my children to grow up like this." His arm traces a sweeping motion across the lagoon, his cousins, the fish waiting on a line to be prepared for dinner. Laughing, he looks through the camera, through me, willing his message beyond our simple encounter,

"I want them to be able to grow up like me. Tuvaluan! Free!" 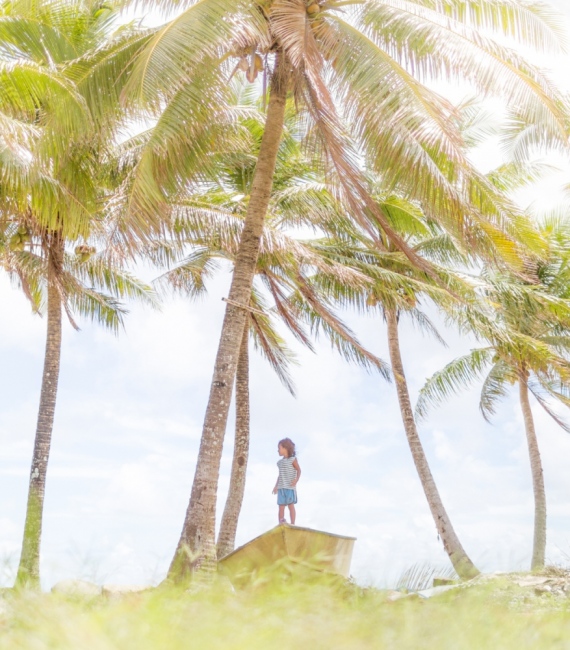 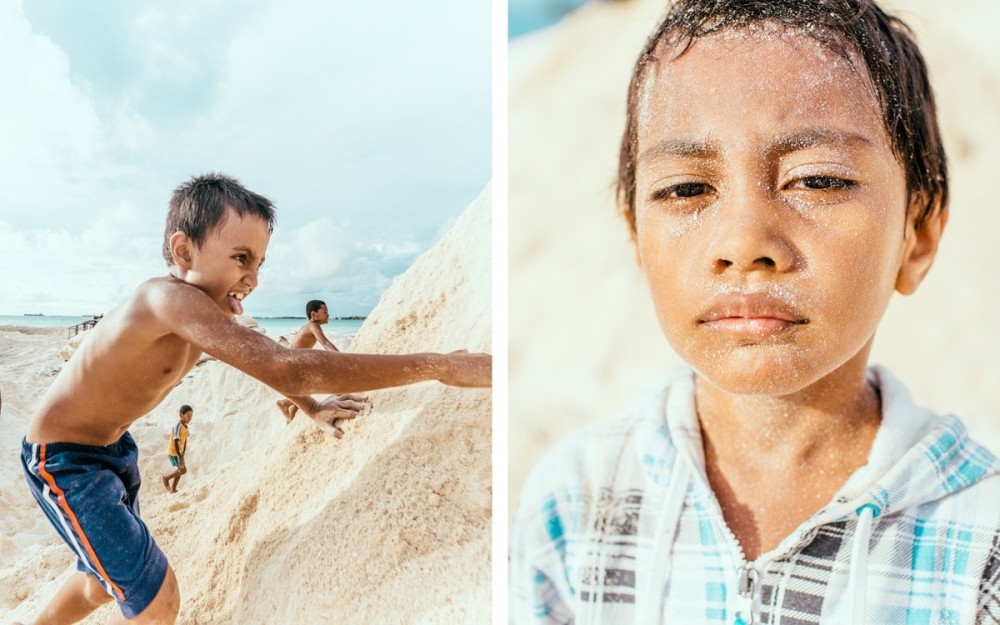 12 of 22 © 2021 Forest Woodward
Children play on sand dredged from the lagoon that will be used to fortify the eroding beach in front of the capital buildings in Funafuti, Tuvalu. 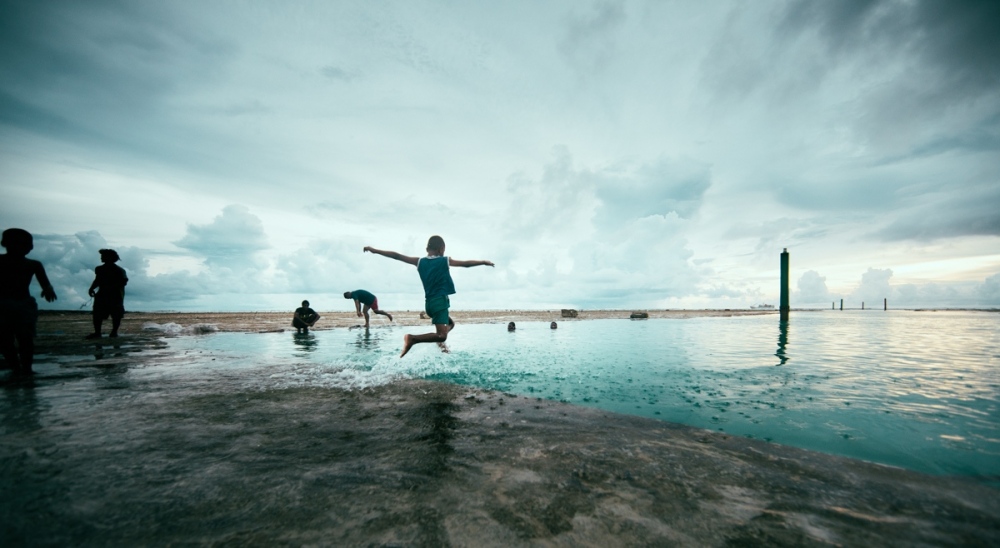 13 of 22 © 2021 Forest Woodward
Children at play on the outer island of Nui. The outer islands are serviced only once every 4-6 weeks by a government ship that brings supplies and transports passengers to and from the capital island. 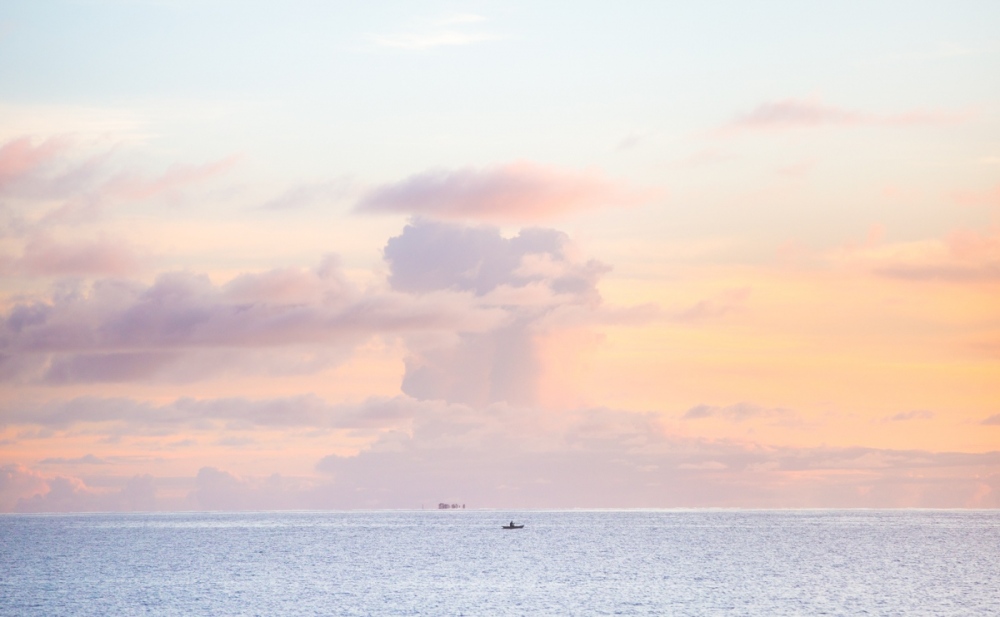 14 of 22 © 2021 Forest Woodward
A traditional canoe at sunset in the Funafuti lagoon. 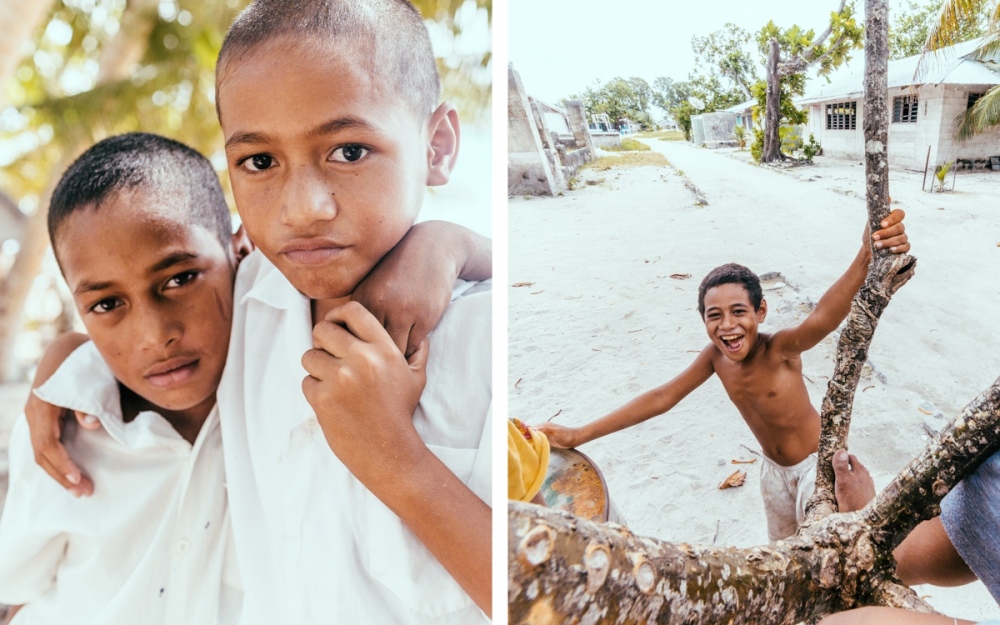 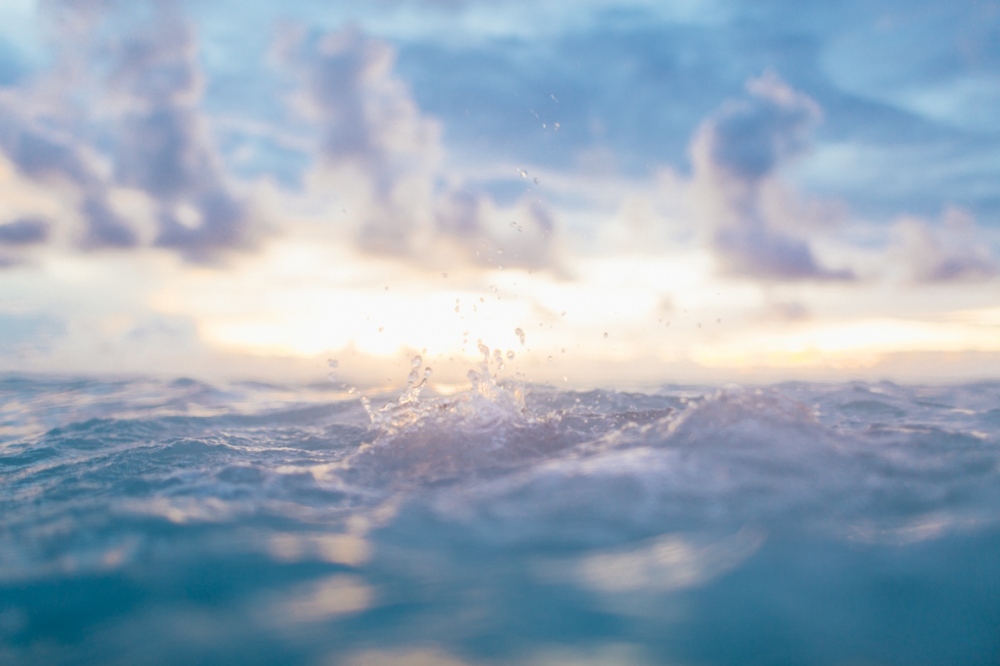 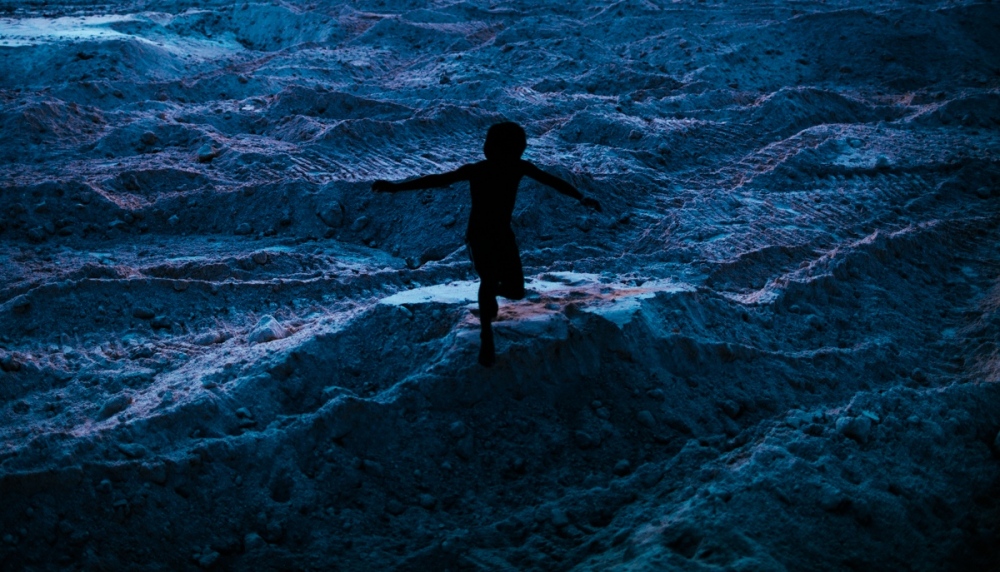 17 of 22 © 2021 Forest Woodward
Traversing the adaptation infrastructure in front of the capital buildings. 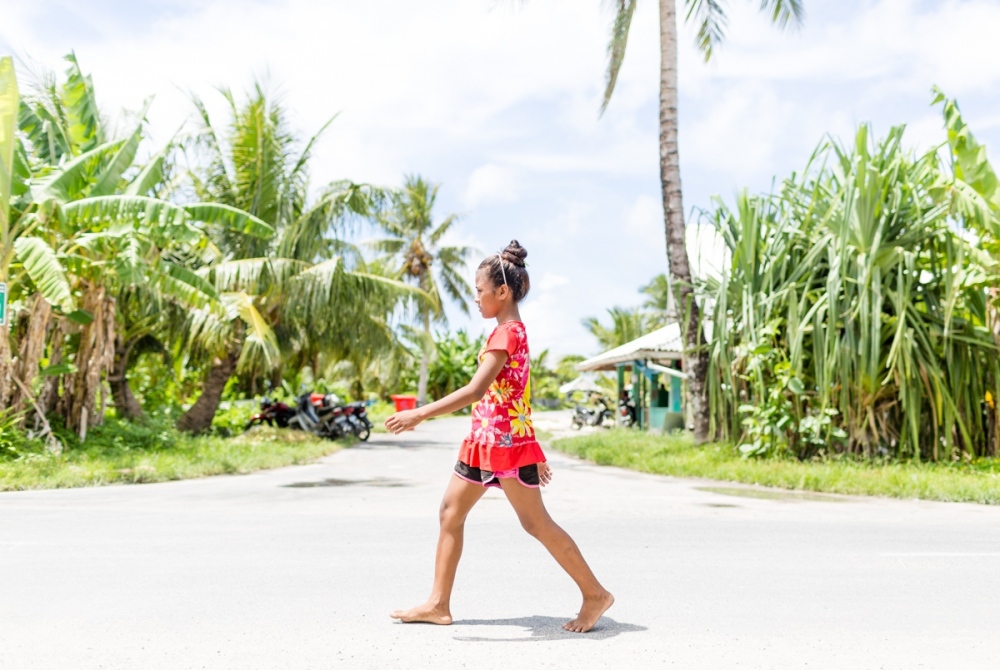 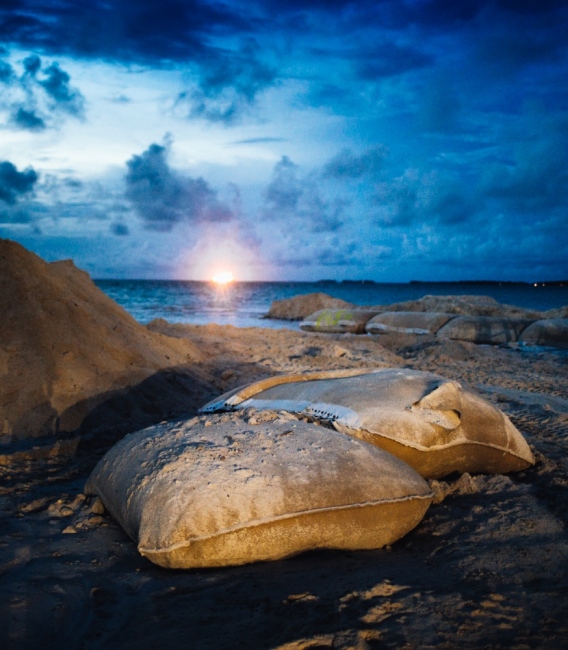 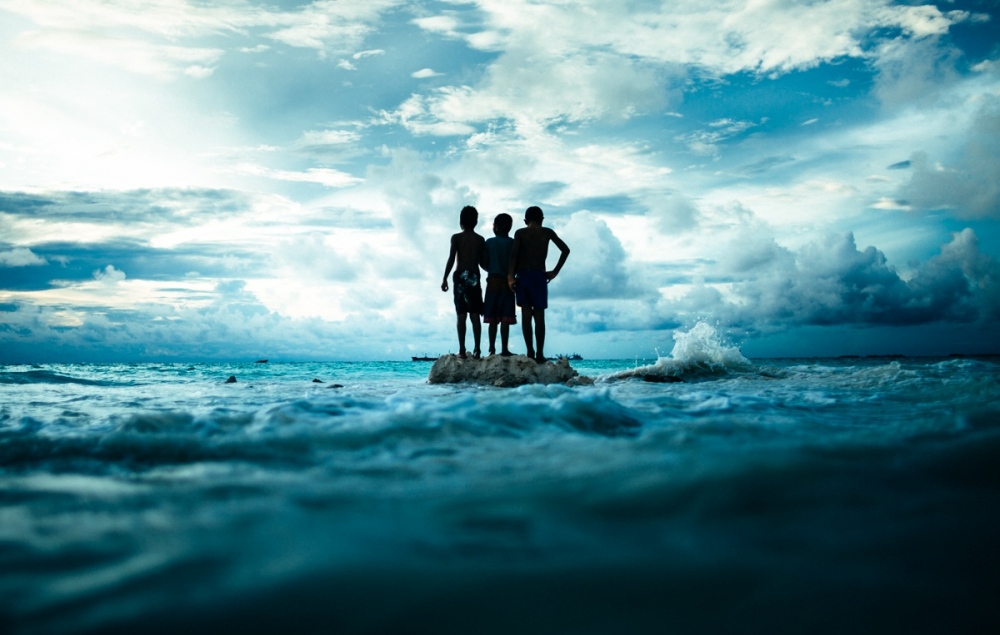 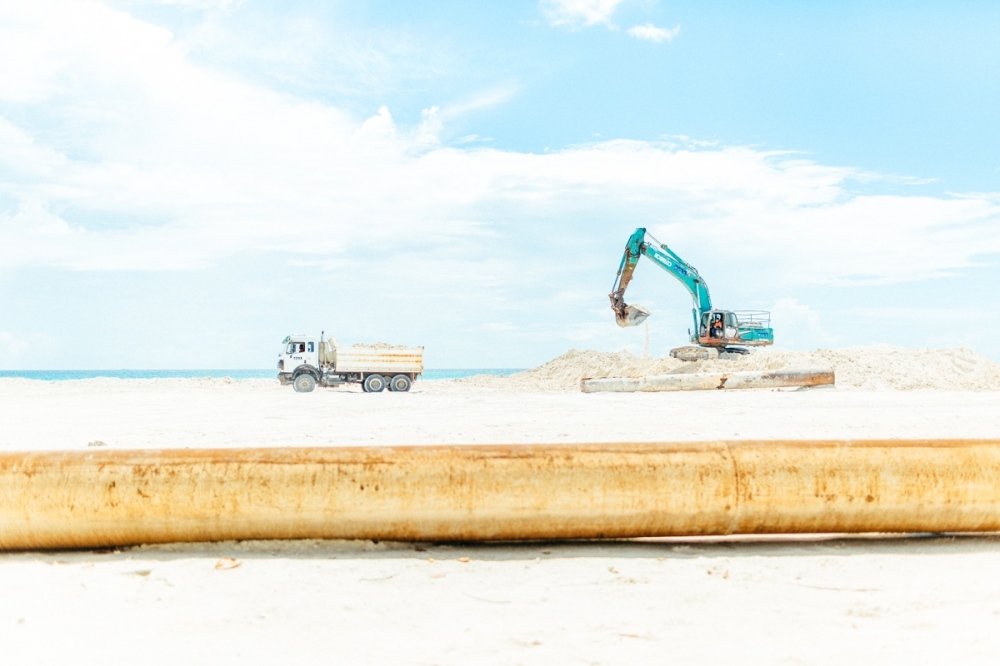 21 of 22 © 2021 Forest Woodward
Machinery dredges and relocates sand to build up the low-lying landmass, in a climate adaptation effort. 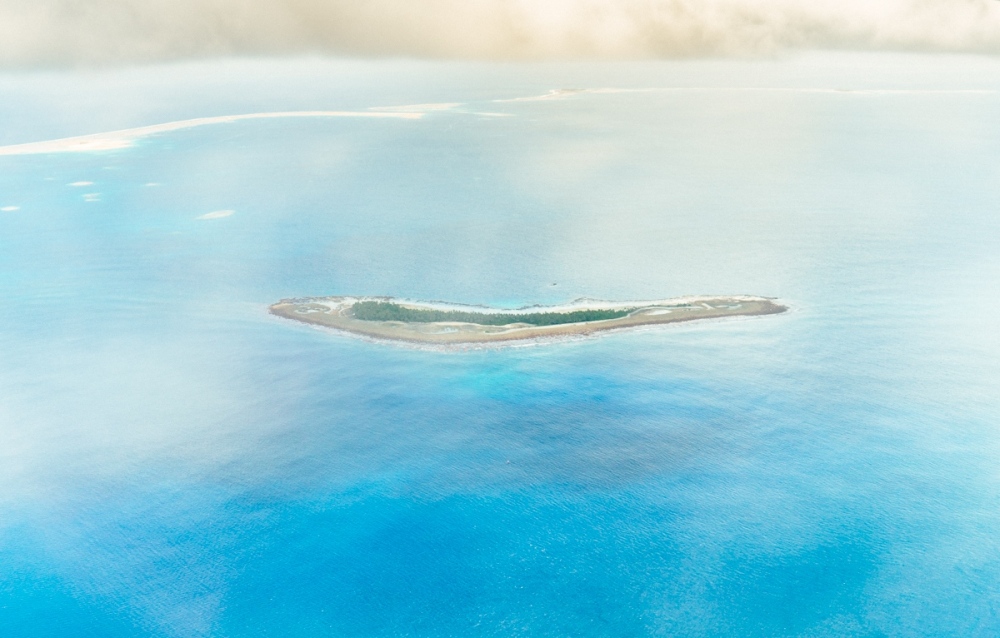 Collapse the Distance is a longitudinal storytelling project that seeks to amplify and give voice to youth on the climate change frontlines in the Pacific. My hope is that these images transport the audience to the low-lying Pacific island nation of Tuvalu - a nation faced with hungry tides, storm surges, and a freshwater crisis. Currently, Tuvalu sits on average just two meters above sea level and is predicted (according to a UN report) to be the first nation to lose sovereignty due to climate change.

Geographical distance and privilege insulate Western polluters from vibrant Pacific frontline communities fighting to maintain their way of life against climate change. The images that follow herein were created In the Spring of 2016 with the hope that they might help to collapse the distance between disparate communities by offering a humanistic look into the lives of the Pacific youth who in many ways inhabit a paradise, and yet whose futures are marked by a dichotomy; the quiet erosion of their land and culture in the face of the rising tides of a global climate crisis.

These images were created during a three week period spent living in Funafuti, the capital of Tuvalu, while also traveling to the outer island communities which seldom see visitors and have not (to my knowledge) been photographed in the past decade.