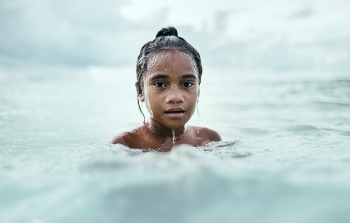 Collapse the Distance is a multimedia storytelling project about climate change on the Pacific frontlines. Fusing photojournalism, audio storytelling, video, and written word, Collapse the Distance transports its audience to the low-lying Pacific island nations of Tuvalu and Kiribati, sibling nations that face hungry tides, storm surges, and a freshwater crisis. As geographical distance and privilege insulate Western polluters from vibrant Pacific frontline communities fighting to maintain their way of life against climate change, this project aims to collapse that distance with raw and honest storytelling.


Collapse the Distance has been exhibited at the Telluride Mountain Film Festival and Harvard University. Forest Woodward’s photographs and Canyon Woodward’s writings have been featured in National Geographic Adventure, while Mattea Mrkusic’s audio stories have aired on PRI: The World and NPR stations across the country.

Forest Woodward is an internationally published and awarded photographer and filmmaker based out of Asheville, North Carolina. With an eye towards issues of social and environmental justice, Forest's work seeks to transcend politics and prejudice and offers the viewer an opportunity to engage in relevant contemporary issues through a humanistic lens. Forest's photographs have been widely published, with notable appearances in The Alpinist, National Geographic Adventure, VICE and The Atlantic. His films Food Chains and The Important Places have screened in dozens of countries, with festivals including Tribeca and Berlinale, receiving critical acclaim and an array of awards including "Best Short Film" from Banff Mountain Film Festival and the James Beard Award.

Canyon Woodward is an internationally recognized writer, activist, and producer from Western North Carolina. Canyon earned his A.B. from Harvard College, where he co-coordinated the Divest Harvard campaign and wrote his senior thesis on the climate movement in the United States. Canyon’s writing has been published in The Nation Magazine, National Geographic Adventure, and The Harvard Crimson. Canyon has also appeared in TV, radio, and newspaper interviews on HuffPost Live, NPR, Newsweek and The Boston Globe.

Mattea Mrkusic is a New Zealand-American radio producer, photojournalist, and climate migration researcher. Following her field research in the Pacific Island nation of the Republic of Kiribati, she started a podcast that would become the first audio iteration of the climate change storytelling project, Collapse the Distance. Previously she was an editorial intern for Years of Living Dangerously, the National Geographic Channel Emmy-award winning climate change series. Currently, she works as a researcher for Okapi Productions, producing a film about the Louisiana criminal justice system. Her work has been published in The Washington Post, PRI: The World and Harvard Political Review. She is a graduate of Harvard College.