The Washington Post is a major American daily newspaper published in Washington, D.C., with a particular emphasis on national politics and the federal government
Follow
Profile
News (68)
Location: Washington, D.C.
Biography:  In Sight is The Washington Post photography blog for visual narrative. This platform showcases compelling and diverse imagery from staff and freelance photographers, news agencies, and archives. If you are interested in submitting a... read on 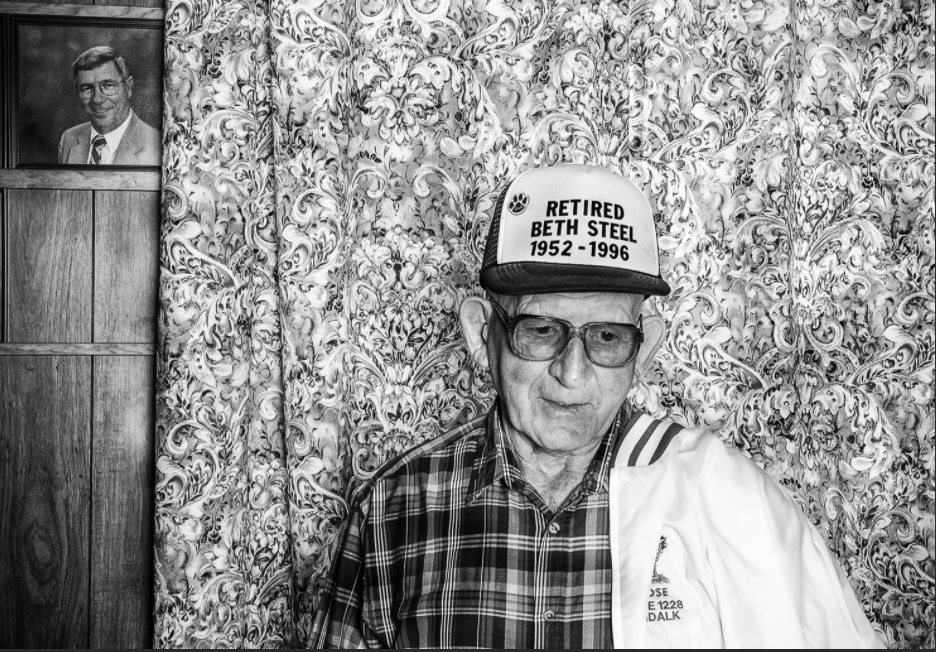 1 of 1 © 2020 The Washington Post
Pete, a retired steelworker at his social club, the Moose, in Baltimore. (J.M. Giordano/Redux)
Media News
These stark, black-and-white photos show the impact of a dead steel industry in Baltimore
the washington post
Mar 11, 2020
Photographer J.M. Giordano documents the decline of industry in his hometown.

For 125 years the Bethlehem Steel mill in Baltimore’s Sparrows Point provided work for tens of thousands of men and women. For those employees, the work was a way of life. The mill not only provided jobs but also led to stable communities — things that give people identity. When the mill shut down, those things eroded, decayed and vanished.

Baltimore photojournalist J.M. Giordano has trained his lens on this erosion for the last 15-plus years. His gritty, stark black-and-white images follow the decline and its impact on Baltimore in sharp relief. And they are on view now at the Baltimore Museum of Industry in “Shuttered: The Fall of Bethlehem Steel.”

Giordano, the grandson of a steelworker, began the project when the mills in Baltimore sputtered and then descended into a downward spiral. Giordano’s photos show us the bleak, crumbling landscape and introduce us to some of the people left behind. Amid the shuttered, abandoned union halls and blown-off facades of the former Bethlehem Steel headquarters, Giordano introduces us to people like Pete, Lee and Elizabeth, all former steelworkers who put decades into their jobs. Pete worked at Bethlehem Steel from 1956 to 1992, while Lee, a former Marine, put in over four decades at Sparrows Point.

Perspective | These stark, black-and-white photos show the impact of a dead steel industry in Baltimore
Photographer J.M. Giordano documents the decline of an industry in his hometown.

Through the Eyes of Women

By The Washington Post — In mid-March, when it became evident many photographers were losing income and work opportunities and living in isolation, C harlotte Schmitz , a..
May 27, 2020

By The Washington Post — Perspective | A photographer sees a place inhabited by a dream version of an unsettled world gripped by pandemic Oksana Parafeniuk asked people to..
May 26, 2020

Restricted by the Covid-19 pandemic, this photographer is creating an intensely personal ‘Quarantine Ballad’

By The Washington Post — Photographer Tomaso Clavarino reflects, through his camera, on being locked down during the COVID-19 pandemic. Written by Kenneth Dickerman  ..
May 22, 2020

By The Washington Post — It seems like the  coronavirus pandemic has touched just about everything around the globe. So I find it a little odd to write about new photo..
May 9, 2020

A photographer creates a ‘Cosmos’ of bacteria

By The Washington Post — Marcus DeSieno’s art project displays microscopic bacteria that are grown onto photographic film of images from space.
May 6, 2020

The porch diaries: Social isolation and the coronavirus in Australia

By The Washington Post — Australian photographer Alana Holmberg shows small slivers of daily life in the time of the coronavirus.
May 5, 2020

What life is like under lockdown in northern Italy

These people are helping save orangutans in Sumatra, Indonesia

By The Washington Post — Belgian photojournalist Alain Schroeder first encountered orangutans as a tourist in Indonesia. After feeling an immediate connection to them, he..
Apr 8, 2020

‘There is a comfort in knowing that the heartbeat of these hills will be There for us. That the rhythm of everyday life moves on.’

By The Washington Post — Photographer Isadora Kosofsky spent years shadowing the three intertwined lives of Adina, Will and Jeannie for her new book, "Senior Love..
Feb 14, 2020