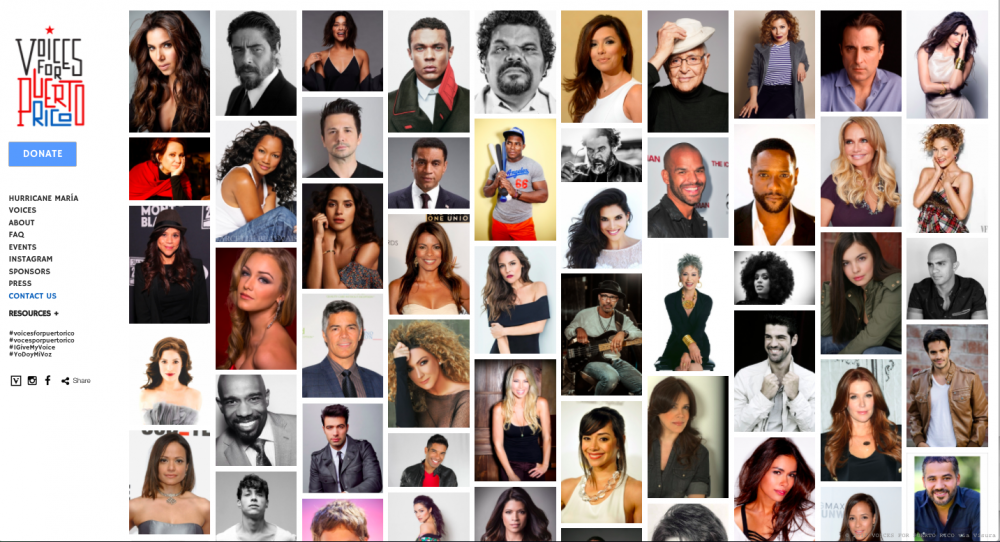 News
VOICES FOR PUERTO RICO’s YOUCARING CAMPAIGN RAISES $250,000 TO DISTRIBUTE TO NON-PROFIT ORGANIZATIONS IN PUERTO RICO
voices for puerto rico
Dec 8, 2017
The Nationwide Initiative Created by a Group of Artists and Entrepreneurs Will Donate $10,000-$30,000 To Different Entities
LA, CA; New York, NY; San Juan, PR -- December  6, 2017:
VOICES FOR PUERTO RICO’s (Voces por Puerto Rico) YOUCARING campaign to bring much needed financial resources directly to the people of Puerto Rico most affected by Hurricane María. Having raised a total of $250,000, the campaign, which officially ended on December 1st, 2017, was originally launched on October 2 by Roselyn Sánchez and Voices for Puerto Rico co-founders Mariem Pérez and Carlitos Ruiz (Calma Films, Inc), and Adriana Teresa Letorney (Visura.co).
In a joint statement, the co-founders of Voices for Puerto Rico said: “Thank you for supporting our fellow Americans in Puerto Rico, whose lives have been devastated and silenced by Hurricane Maria, by helping to spread the word but more importantly by stepping up to the plate and donating as much as you could to rebuild Puerto Rico.”
Proceeds from the campaign have been distributed by RS Events for Life to the following non-profit organizations, amongst others:

The Voices Team will remain committed to supporting local communities. Although this campaign ended on December 1st, 2017, its next project will be focused on supporting the children of Puerto Rico.

In addition to this campaign, Voices for Puerto Rico also:

VOICES FOR PUERTO RICO (Voces por Puerto Rico) is a nationwide grassroots humanitarian and nonpartisan initiative by Puerto Rican artists and influencers residing in the US to support rural and/or disconnected local communities affected in Puerto Rico by natural disasters and economic challenges.
VOICES FOR PUERTO RICO’s mission is to identify and support non-profit local organizations working directly with the community to provide basic resources, including proven alternative solutions to housing, accessing solar energy as well as offering art, cultural and sports initiatives in an effort to promote emotional and physical health.
To learn more about VOICES FOR PUERTO RICO please visit voicesforpuertorico.com.
ADD YOUR VOICE! WE NEED YOU! TOGETHER WE ARE STRONGER!
#VoicesForPuertoRico, #VocesPorPuertoRico, #IGiveMyVoice, and #YoDoyMiVoz.
# # #
If you represent a nonprofit organization on the Island or are interested in partnering with VOICES, please email: info@voicesforpuertorico.com / contact@voicesforpuertorico.com

VOICES FOR PUERTO RICO
An initiative by the creative community worldwide to support those affected in Puerto Rico by Hurricane María.

Also by Voices For Puerto Rico —

By Voices For Puerto Rico — Written by Adriana Teresa Letorney/ Visura Magazine During the course of a full career playing bass,..
Oct 14, 2017

By Voices For Puerto Rico — SAN JUAN, P.R. — Power was knocked out across Puerto Rico on Wednesday and communications were scarce, but..
Sep 22, 2017

on NYTimes: Hurricane Maria Live Updates: In Puerto Rico, the Storm ‘Destroyed Us’

By Voices For Puerto Rico — Puerto Rico remained in the throes of chaos and devastation Thursday as the remnants of Hurricane Maria..
Sep 21, 2017