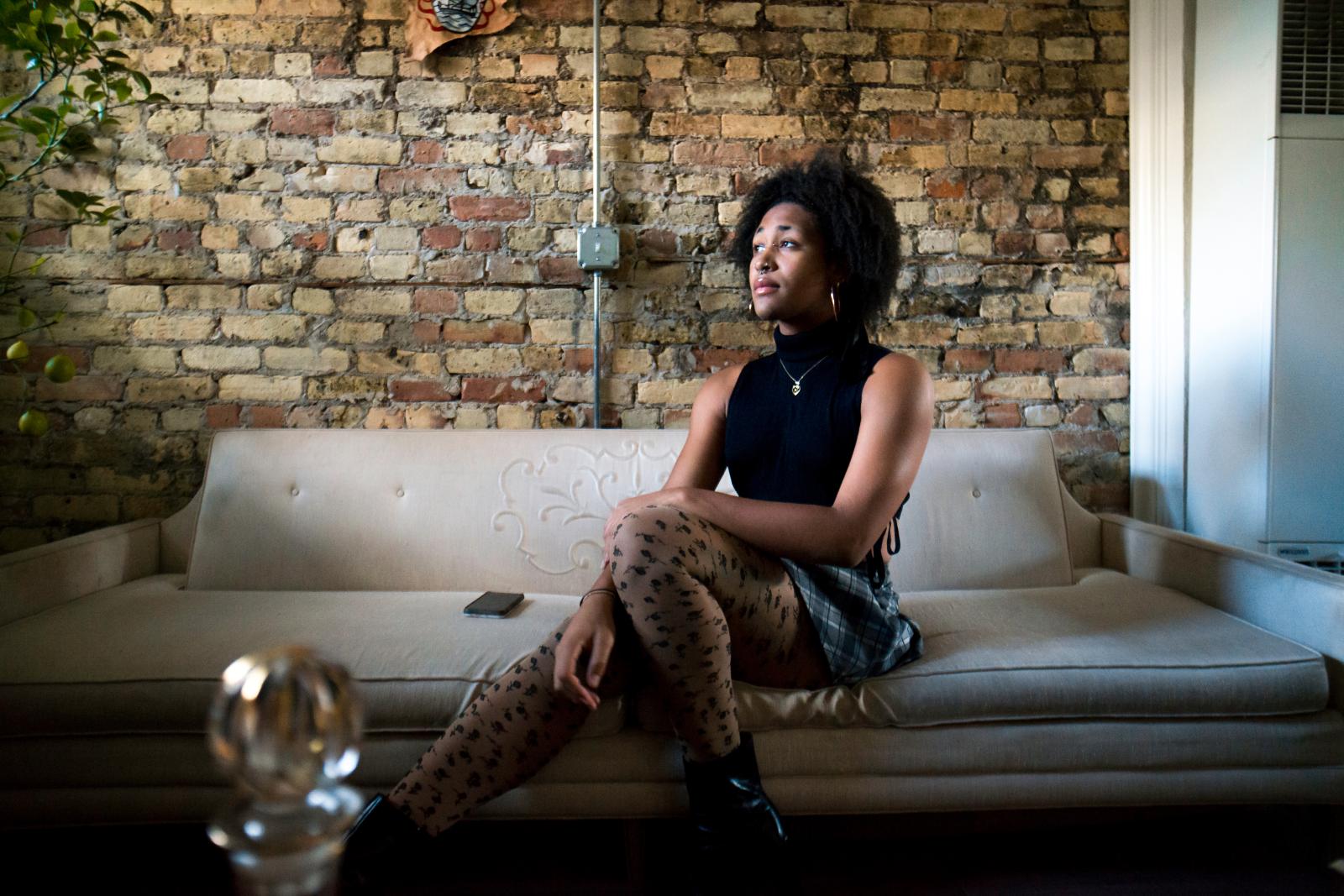 1 of 14 © 2022 Alexander Gouletas
​Activist Zola Chatman in Her Home “Whiteness in America, that system thrives on Black people — Black women, the identities of Black women and Black trans women as well — being oppressed and marginalized to the point where they are considered worthless, for a lack of better words,” “Although there may be white allies who voiced a desire to make those changes, or voiced a desire to create spaces for those things to be overthrown or revolutionized, no white person wants to give us their power in a way that completely lets that system be flipped on its head,” 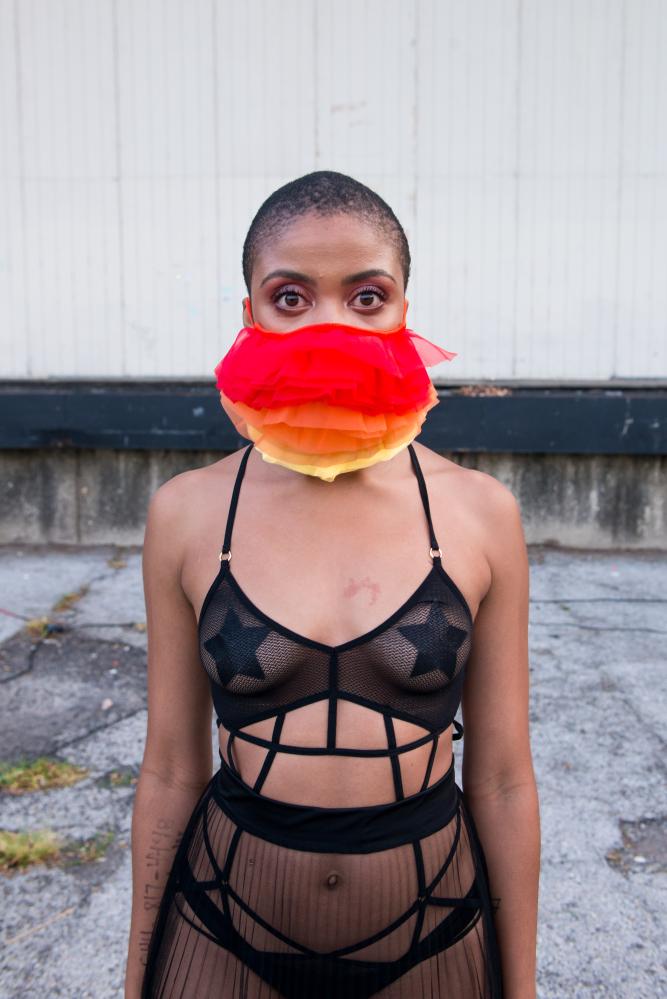 2 of 14 © 2022 Alexander Gouletas
DeCarri Robinson organizer of the Stripper Strike Chicago demonstration. Of Those impacted Economically by Covid-19. Sex workers have no worker protection. “Our income is taxed and we have to pay the house in order to work, but we don’t benefit from it,” Robinson said. “All we got when things shut down was a text message saying that we were out of a job.” “We’re fighting for the human rights that you are granted at every place you work,” Robinson said. “Why is it okay for me to be assaulted?” DeCarri Robinson

This image appeared in the Triibe "Who do we mean when we say ‘Black Lives Matter?’
​The Triibe/ By ​Matt Harvey 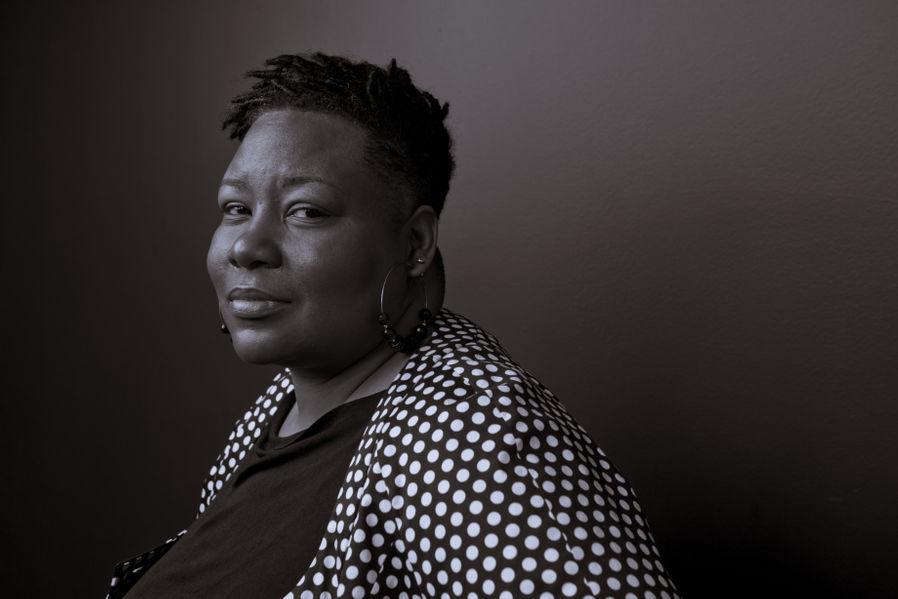 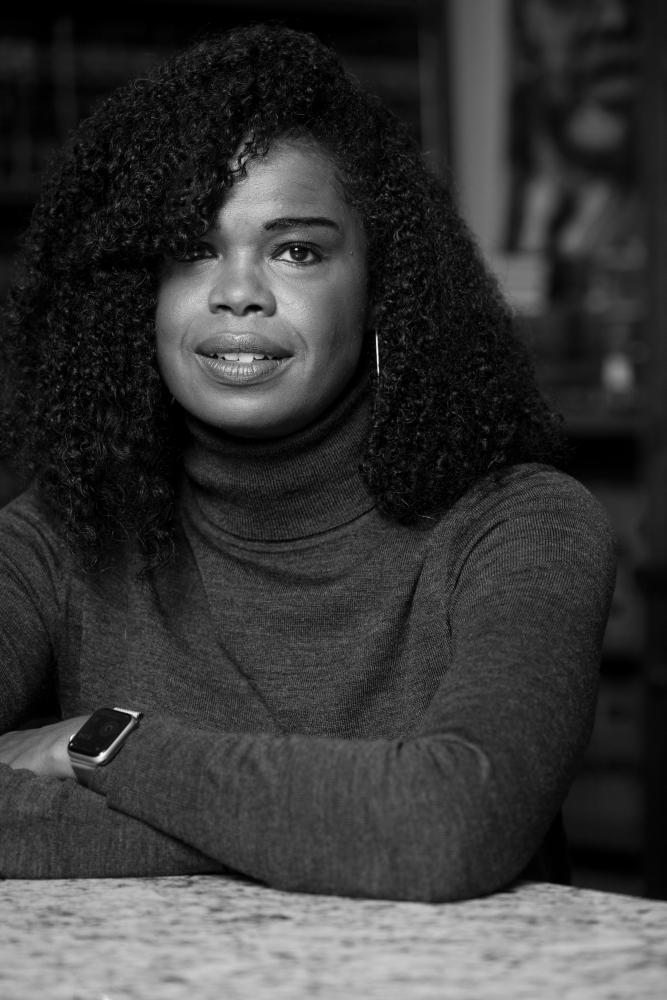 
This quote appeared in The Revolutionary Column | Is Kim Foxx a scape/GOAT?
The Triibe/ By Bella BAHHS 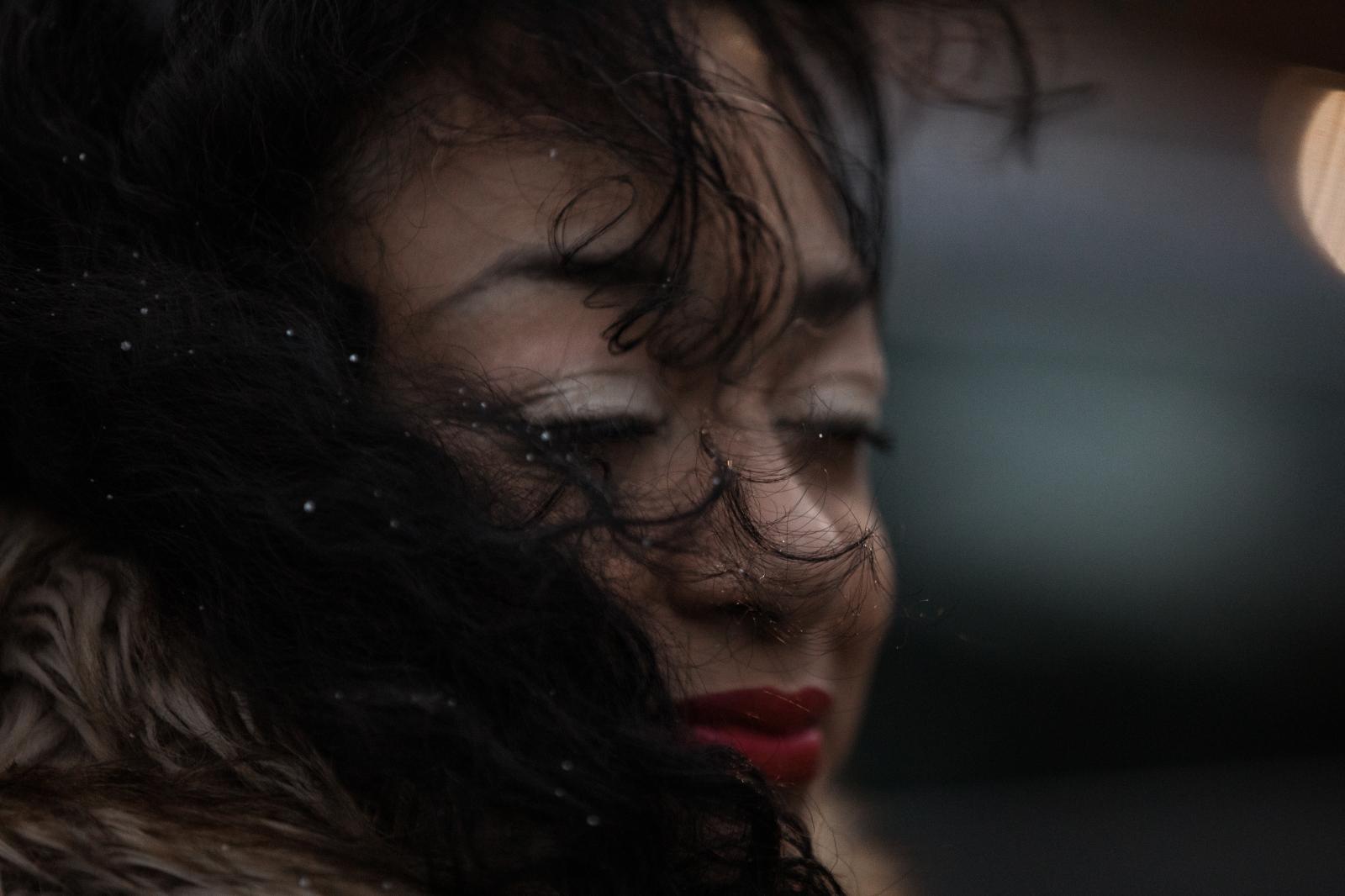 5 of 14 © 2022 Alexander Gouletas
“I was just amazed at the incredible injustice and brutality,” 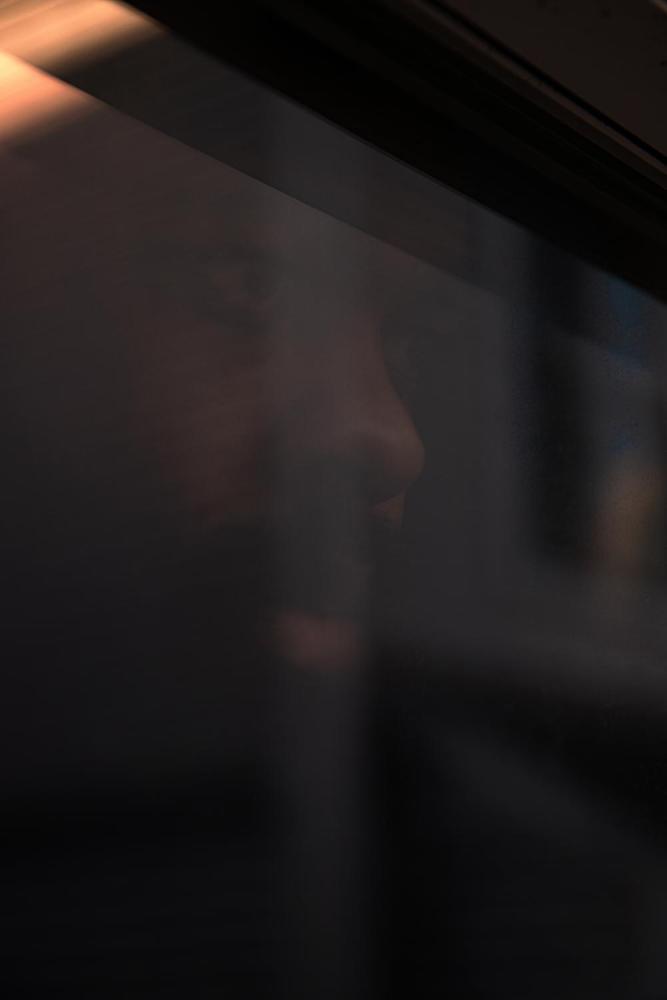 “I was on the ground and they hit me, and another protester had to pick me up and drag me away while they was hitting me,”

“I feel weak, like, I can’t do anything. I can’t be helpful. I can’t be there for people,” 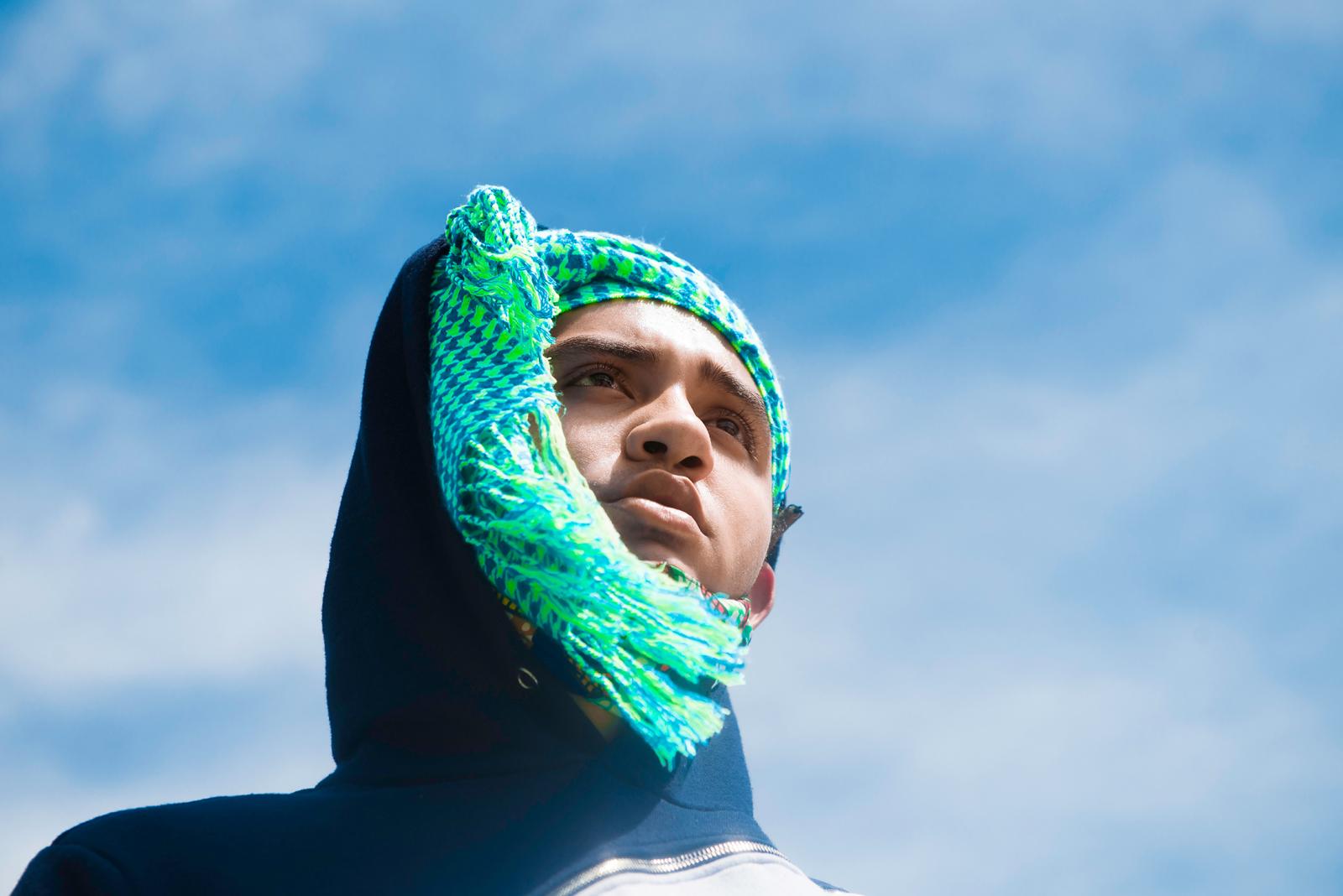 7 of 14 © 2022 Alexander Gouletas
​“At large, you have done an absolutely abysmal, appalling job at covering what’s going on in this city...I see too much coverage of looting and gun violence. You are not showcasing that we are having revolutionary joy,”

This quote appeared in "When reporting on movement actions, revolutionary joy must be given the same space as the struggle"
The Triibe/ B​y Matt Harvey 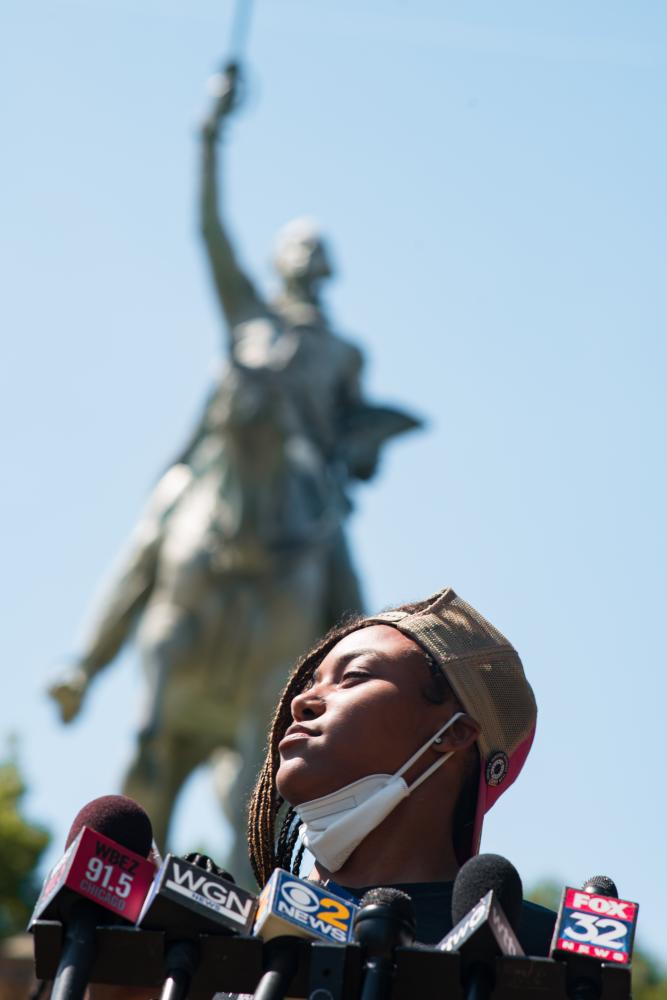 8 of 14 © 2022 Alexander Gouletas
Activist Miracle Boyd of GoodKids MadCity was injured by police during the protest at the Columbus Statue. She was filming an activist's arrest when she was stuck in the face by a Police officer, breaking her front teeth.

Just moments before Boyd gave a press conference, demanding that the officer be fired, the police union leaked an old video of Miracle "bragging" about committing vandalism in an attempt to defamed her

"There are a lot of people who are trying to make me a criminal. I am not a criminal. I am an African American girl who is not protected by police. I am a dedicated freedom fighter who will always stand up for Black and Brown people."

It’s been nearly two years since a Chicago Police Department officer forcefully hit @gkmc18 youth leader Miracle Boyd’s phone during a protest in Grant Park in 2020, knocking out her front tooth.
*
On Wednesday, July 13, the Civilian Office of Police Accountability announced that Officer Nicholas Jovanovich had resigned from CPD as a result of the assault. The police oversight agency recommended that he be fired from the police force after it concluded its investigation last year.

On Wednesday, July 13, the Civilian Office of Police Accountability announced that Officer Nicholas Jovanovich had resigned from CPD as a result of the assault. The police oversight agency recommended that he be fired from the police force after it concluded its investigation last year.
*
I don’t want folks to remember me as the famous youth leader who was assaulted by a police officer who resigned and didn’t get justice. Because at the end of the day, that’s one of many stories to be told about the work in general and other victims and survivors of police violence." 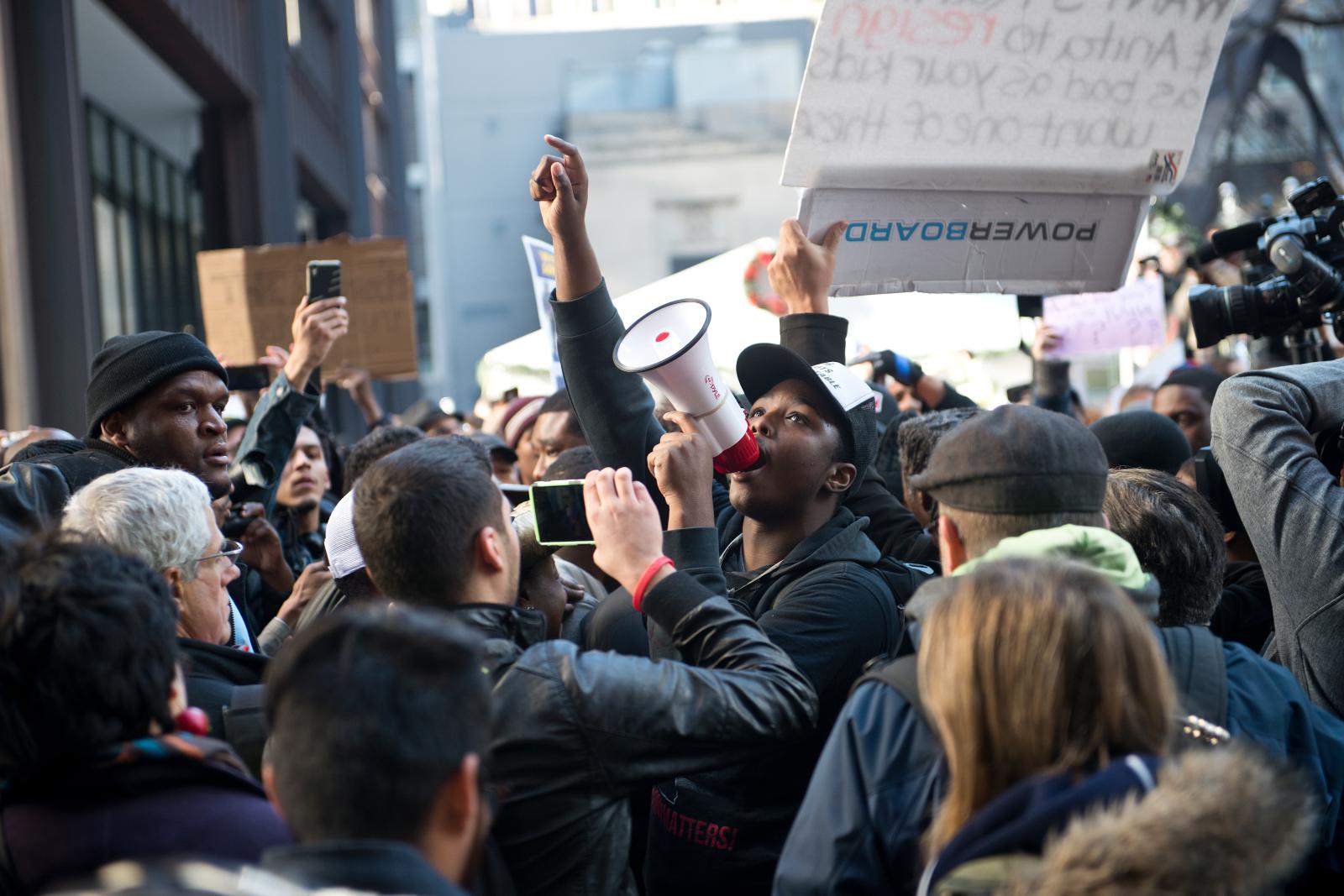 9 of 14 © 2022 Alexander Gouletas
In Chicago, massive demonstrations were held following the release of footage of youth shootings by police. In the Laquan McDonald case, there were police cover-ups, and Mayor Rahm Emanuel delayed release of the footage and subsequent  murder charges until after his re-election. There were calls for the resignations of State’s Attorney Anita Alvarez, Police Superintendent Garry McCarthy, and Mayor Emanuel. Subsequently, Alvarez was voted out of office, McCarthy was fired, and Emanuel declined to seek another term. Jason Van Dyke, the police officer who shot McDonald 16 times, was found guilty of second degree murder.

Jason Van Dyke was released from prison in February 2022 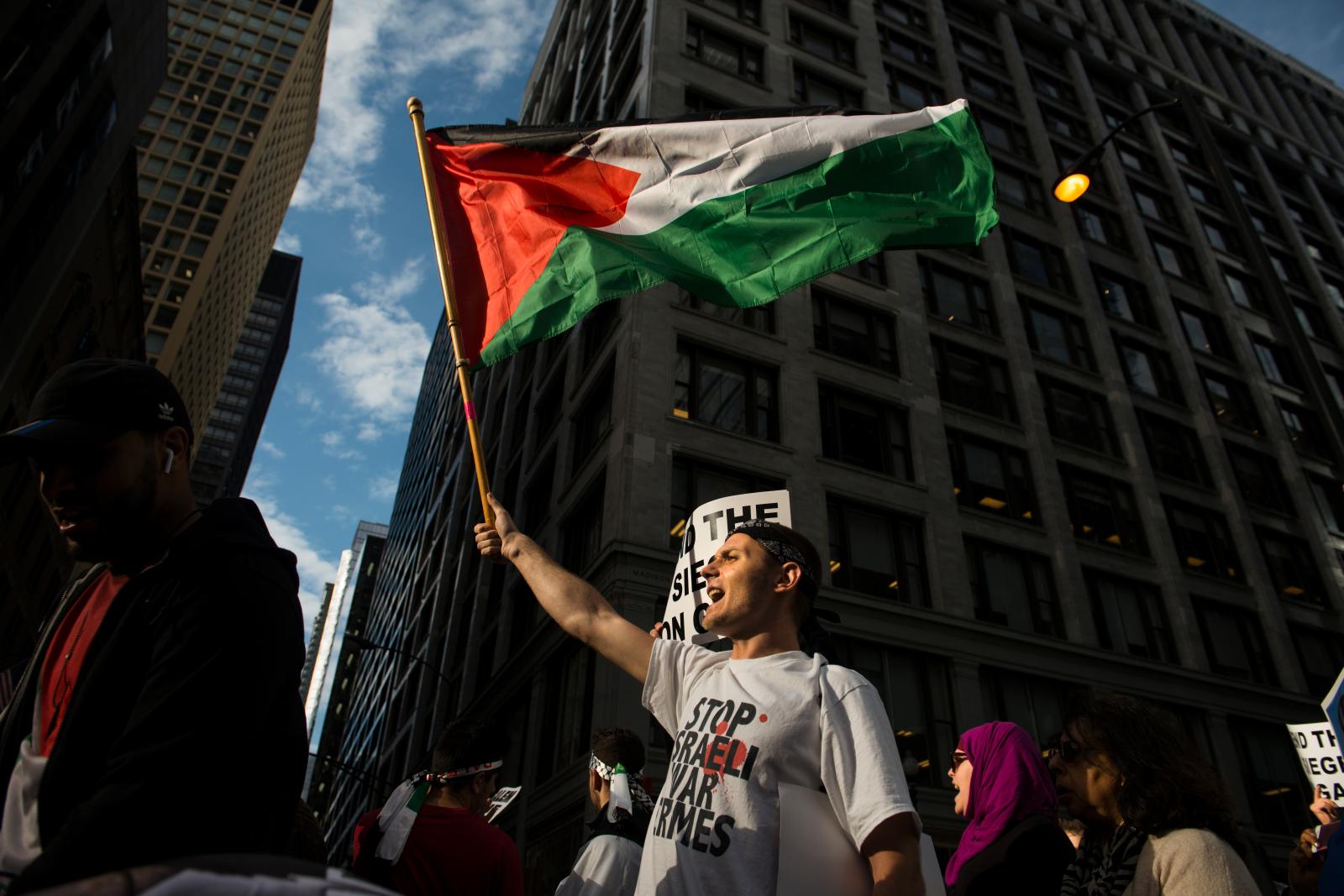 10 of 14 © 2022 Alexander Gouletas
Following the deaths of Palestinian demonstrators by Israeli gunfire, solidarity marchers broke out worldwide to condemn the violence on Nakba May 15 2018. 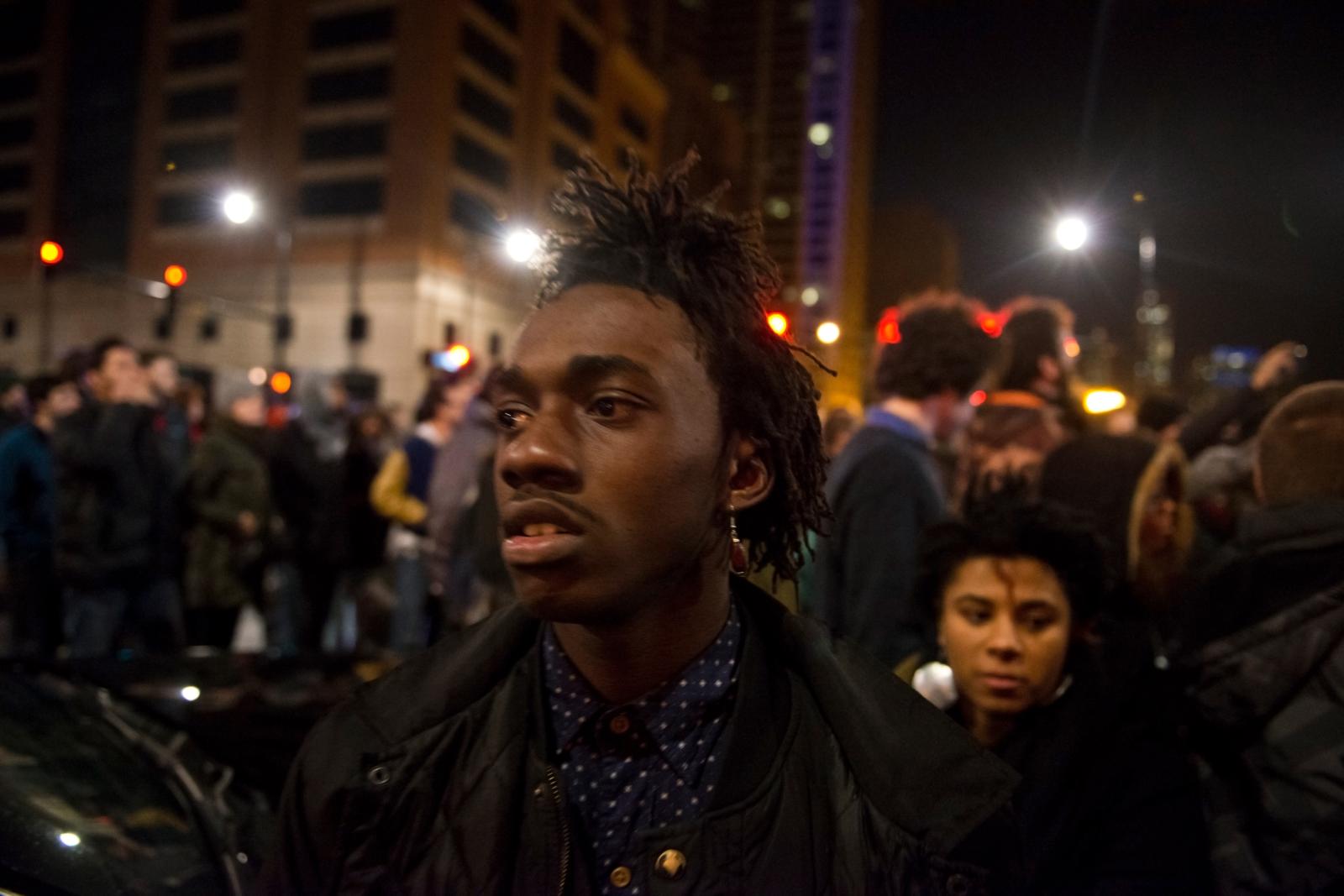 Ric Wilson, Musician, after the confrontation with police after Malcolm London's arrest.-

someone directed Malcolm London to face me. He literally said "I don't care about any damn cameras." Of course he didn't. He had spoken in front of the U.N. giving a Ted Talk and was the Co-chair of the Black Youth Project 100 (byp100) Which is why he was targeted by the police...He had just finished giving a speech, in the middle of a major intersection on Michigan Ave. The crowd followed his every word, blocking traffic and moving when he had finished. Someone had lit a smoke bomb and we watched as a Sergeant signaled through his vest, at Malcolm. A group of officers dog-piled atop him, and he was arrested. There was an outcry for his release, fighting and shoving ensued. The charges were dropped and he was released. Following his release, an anonymous women came forward with sexual assault allegation against London, and he was suspended from his position 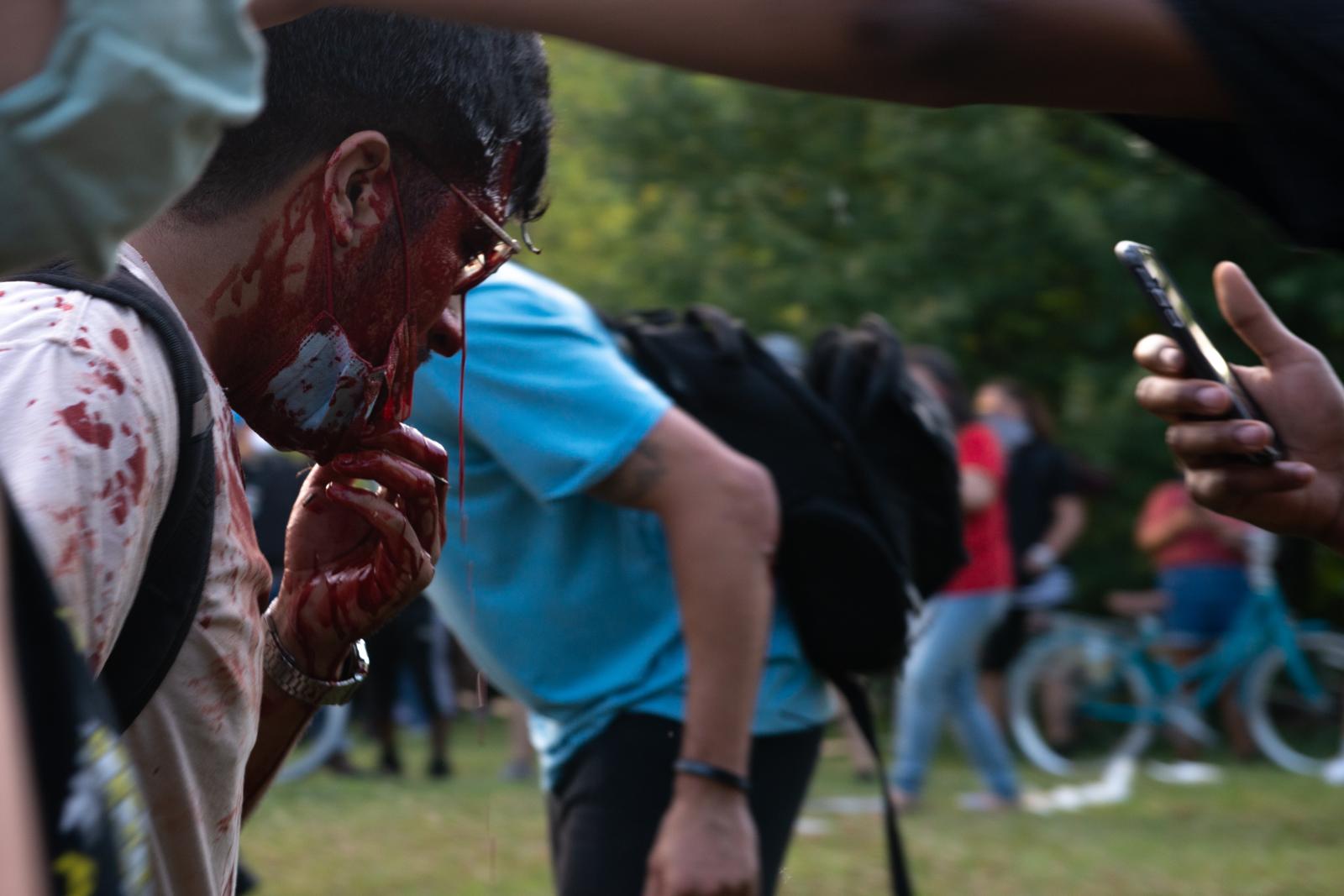 12 of 14 © 2022 Alexander Gouletas
A protestor, bloodied by police, pauses to have his injury documented.


At a Scheduled Black and Indigenous Solidarity rally, organized by a coalition of local activists and mutual aid groups, protestors gave speeches denouncing colonialism and call for the abolishment of the police and the redistribution of funds back to the people of Chicago.
Protestors moved from Buckingham Fountain, where the rally was staged, toward a statue of Christopher Columbus, already wrapped in plastic to prevent vandalization and surrounded by police. Meanwhile, Indigenous drumming and chants of “I am on stolen land, built by stolen people!” ring out from the march.
A group of Black Bloc protestors moved on the statue using banners and umbrellas as shields, hurling bottles and fireworks at the police. forcing them to retreat.
It is at this point the protestors begin an attempt to tare down the statue. One scaling the statue to attach ropes to it.
The police regroup, this time in riot gear, swinging batons, and beating protestors with their own signs and bikes.
In a federal lawsuit 60 people claim they were the victims of excessive force, and abuse
The more than 200-page lawsuit alleges that Chicago police used “brutal, violent, and unconstitutional tactics with the intent to injure, silence and intimidate protesters with unlawful, retaliatory and lethal force.”
One young women had her teeth knocked out.
The City of Chicago removed the statue a week later in the middle of the night. To protest by the fraternal order of police President Patrick Yoes.
Mayor Lori Lightfoot said removing the Christopher Columbus statues from Grant Park and Little Italy were a matter of public safety.
"Last night, after consultation with a variety of stakeholders, the City temporarily removed the Christopher Columbus statues in Grant Park and Arrigo Park until further notice."

Some of these Images appeared in the Chicago Sun Time July 21st, 2020 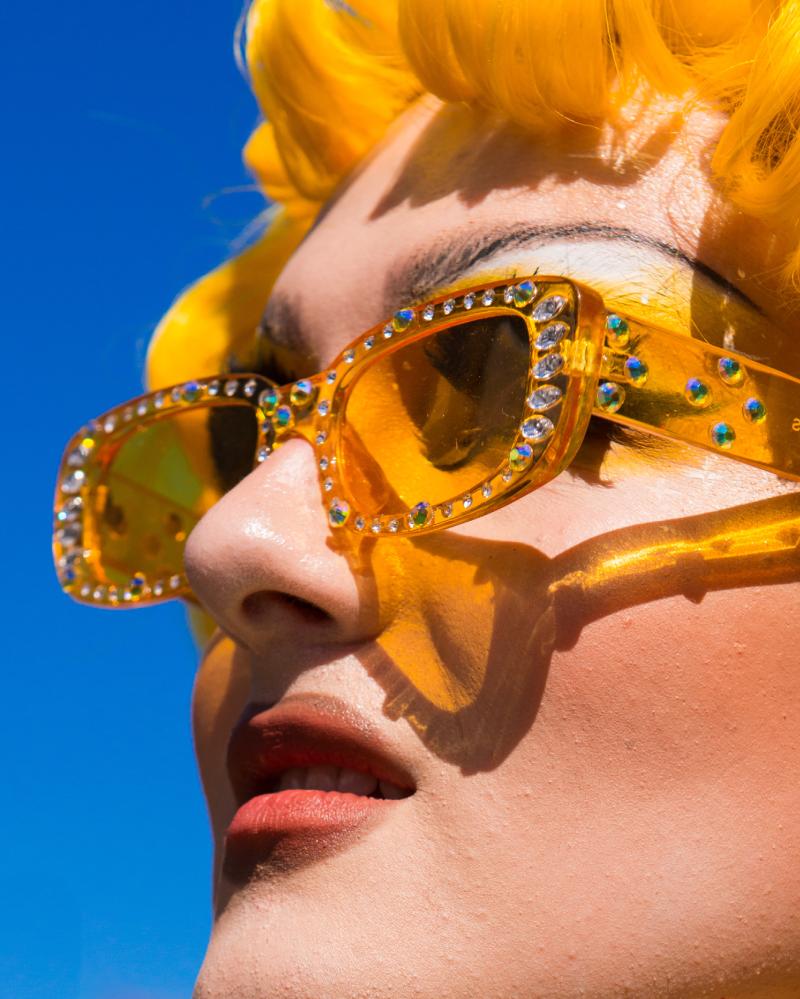 “We were very intentional about: ‘This is not a party, this is not for you to be drinking, playing music,’ especially if you are not Black, POC, or trans,” says Chante, the mutual aid program coordinator at Brave Space Alliance, the first Black-led, trans-led LGBTQ+ Center located on Chicago’s South Side. “This is a protest. This is a place for people to come and listen to Black people and other leaders in the community.”

This quote appeared in Them. by Grace del Vecchio 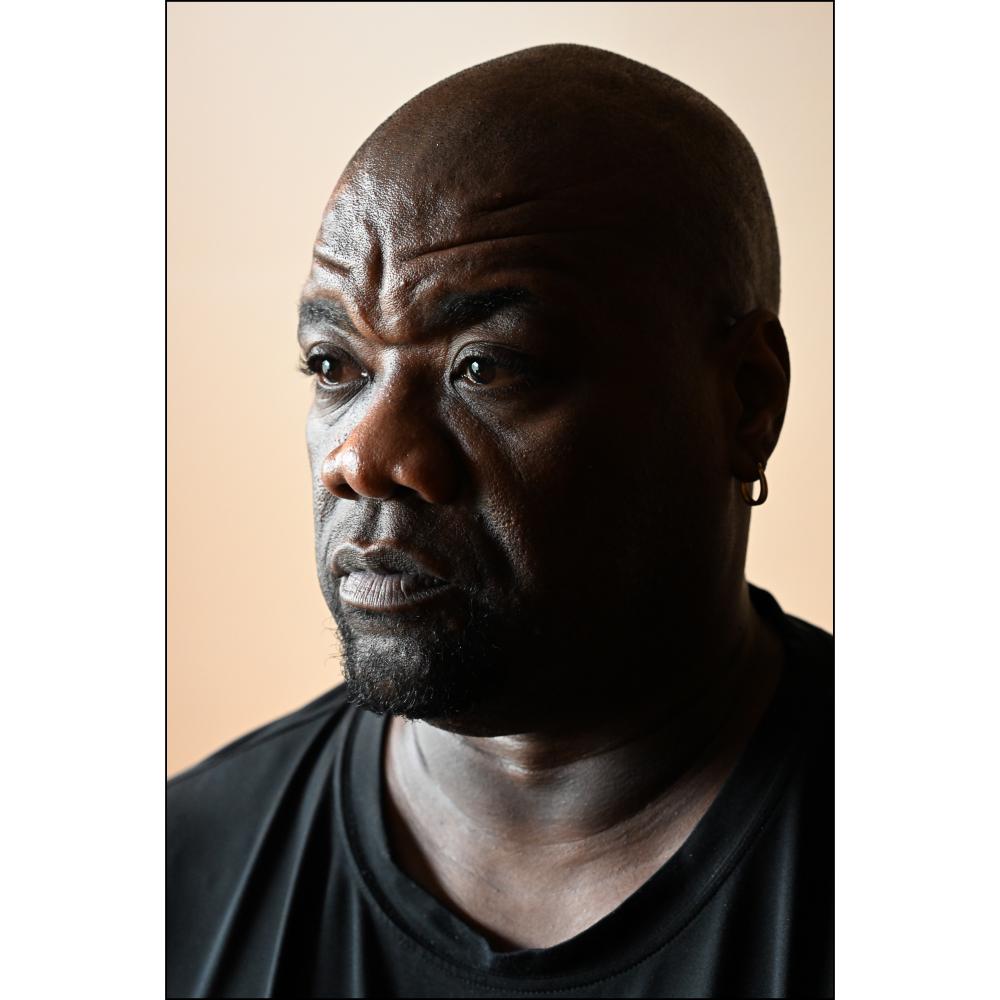 “When they got rid of all the housing over here, they promised they was going to rebuild.”
Former ABLA Homes resident Bryant Spencer

When thousands of families were forced to move out of the ABLA Homes public housing complex two decades ago, Chicago and federal leaders promised they would be able to come back to new housing and a revitalized community on the city’s Near West Side.

More than 30,000 people wait for homes from the Chicago Housing Authority.  Meanwhile, a site that’s gone undeveloped for two decades is set to become a Chicago Fire practice facility.

This Land Was Promised for Housing. Instead It’s Going to a Pro Soccer Team Owned by a Billionaire.

Public Story
Activists
Copyright Alexander Gouletas 2022
Updated Feb 2022
Topics Activism, Social justice, Spotlight
Summary
A series of editorial portraits from a list of prospective subjects working in the activist space, and those that have dedicated their lives to social reform.

My project explores a shift in focus from activism and civil disobedience movements to the individual who choses to do activist work. A story usurped loses the nuances of humanity. We are too often led to consume broad, benign generalizations. Thus, my project strives to expose the authentic narrative beneath the threshold of a muddied and popularized zeitgeist. I am looking for the story to be told from the perspective of the people actually doing the work. From on-the-street organizers to policy makers, this project seeks the space for individuals to speak in their own words.

With my team of editors, producers, and publishers at the Triibe and other publications, we aim to platform individuals who have dedicated their life to social reform. We are committed to pairing them with interviewers and reporters that specialize in these topics in order to highlight their work without over-editorializing. This project meets subjects where they work. The setting and space of activists is therefore integrated as a crucial part of subject identity.

I have been covering activism and civil disobedience primarily in Chicago for the better part of a decade. I will continue in this vein of journalism as I believe in the significance of the individual voice; the organizer; the undervalued and underseen driving force for change. Journalism has the potential to give unfettered space to these individuals. I will continue to advocate space for the activist and subvert an oversimplification of their purpose. The only way to do this work is going to the direct source– the person.

The Storming of the Columbus Statue

What I Saw At Standing Rock...