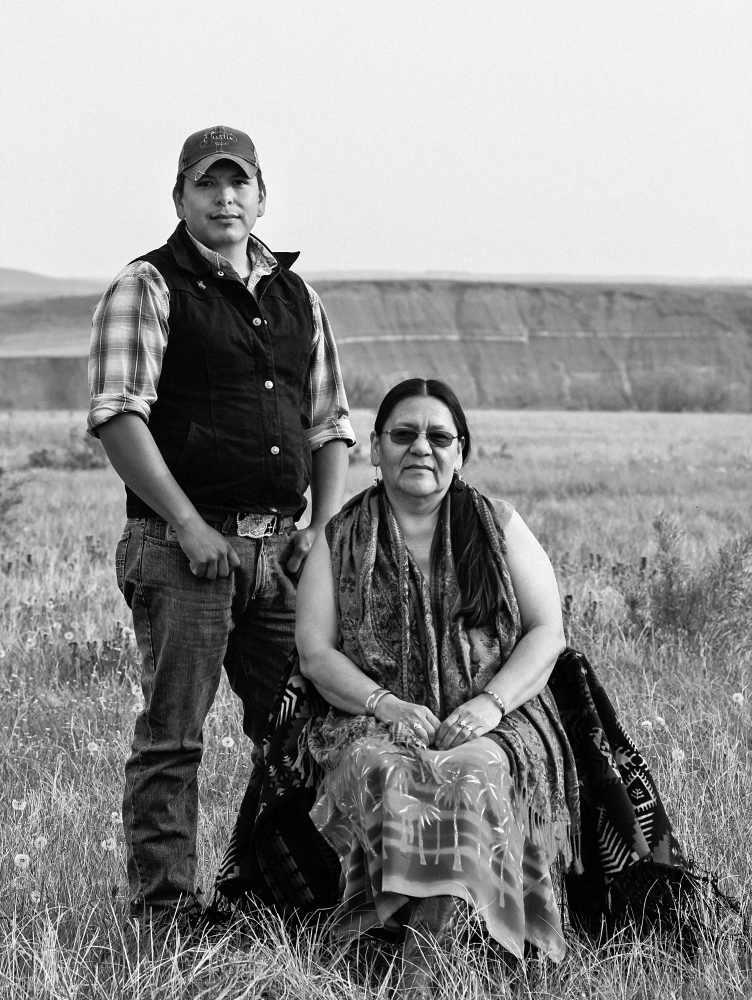 1 of 20 © 2021 Emily Schiffer
Dale Picotte, moved home after two tours in Afghanistan and started helping his family on the 2500 acre cattle ranch his great grandparents established in 1959 on the Cheyenne River Reservation.
©Dawnee LeBeau 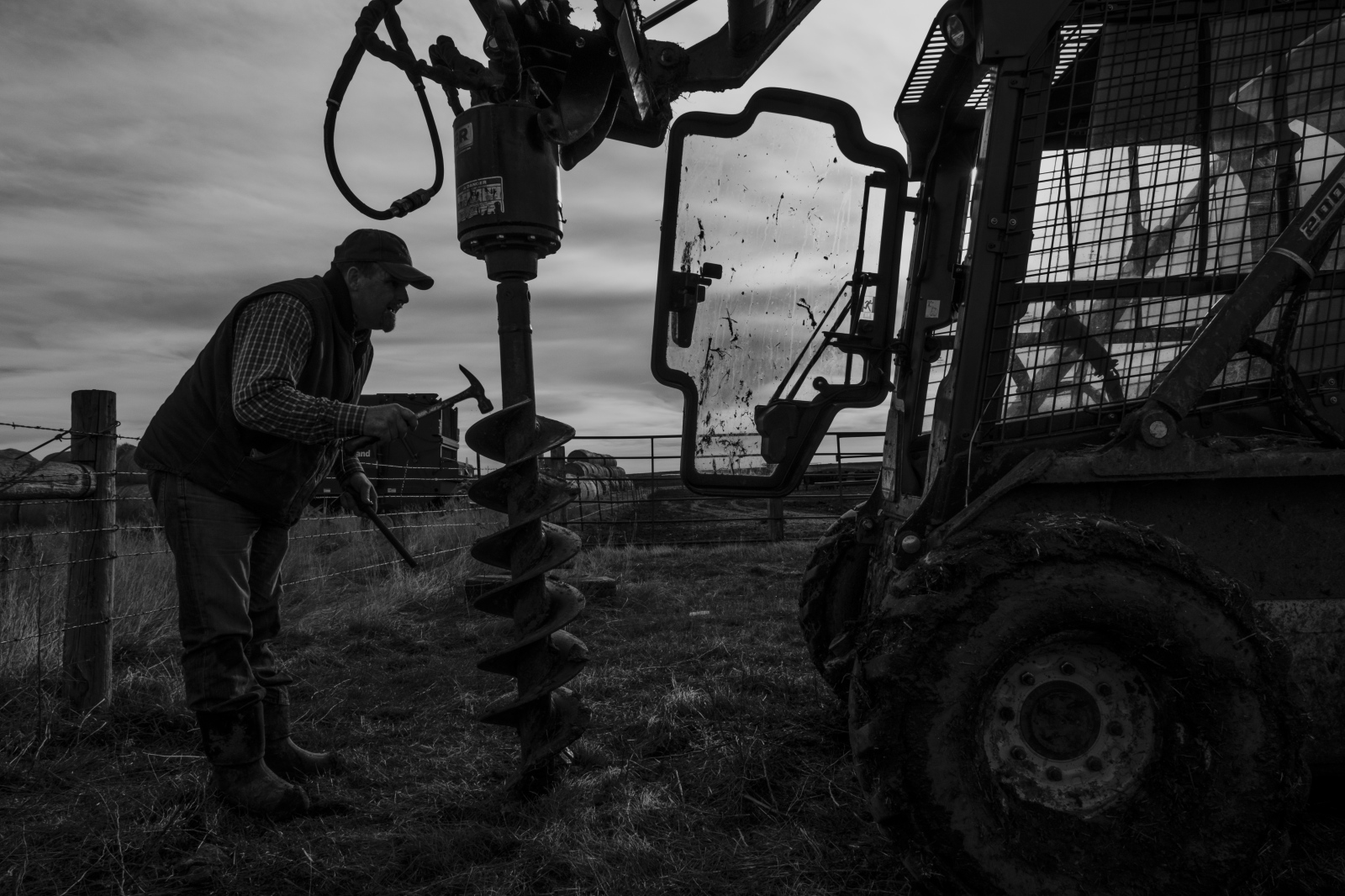 2 of 20 © 2021 Emily Schiffer
Jess Starr fixes his machinery before drilling holes and setting up fencing. Most ranchers are also skilled mechanics, electricians, and carpenters.
©Emily Schiffer 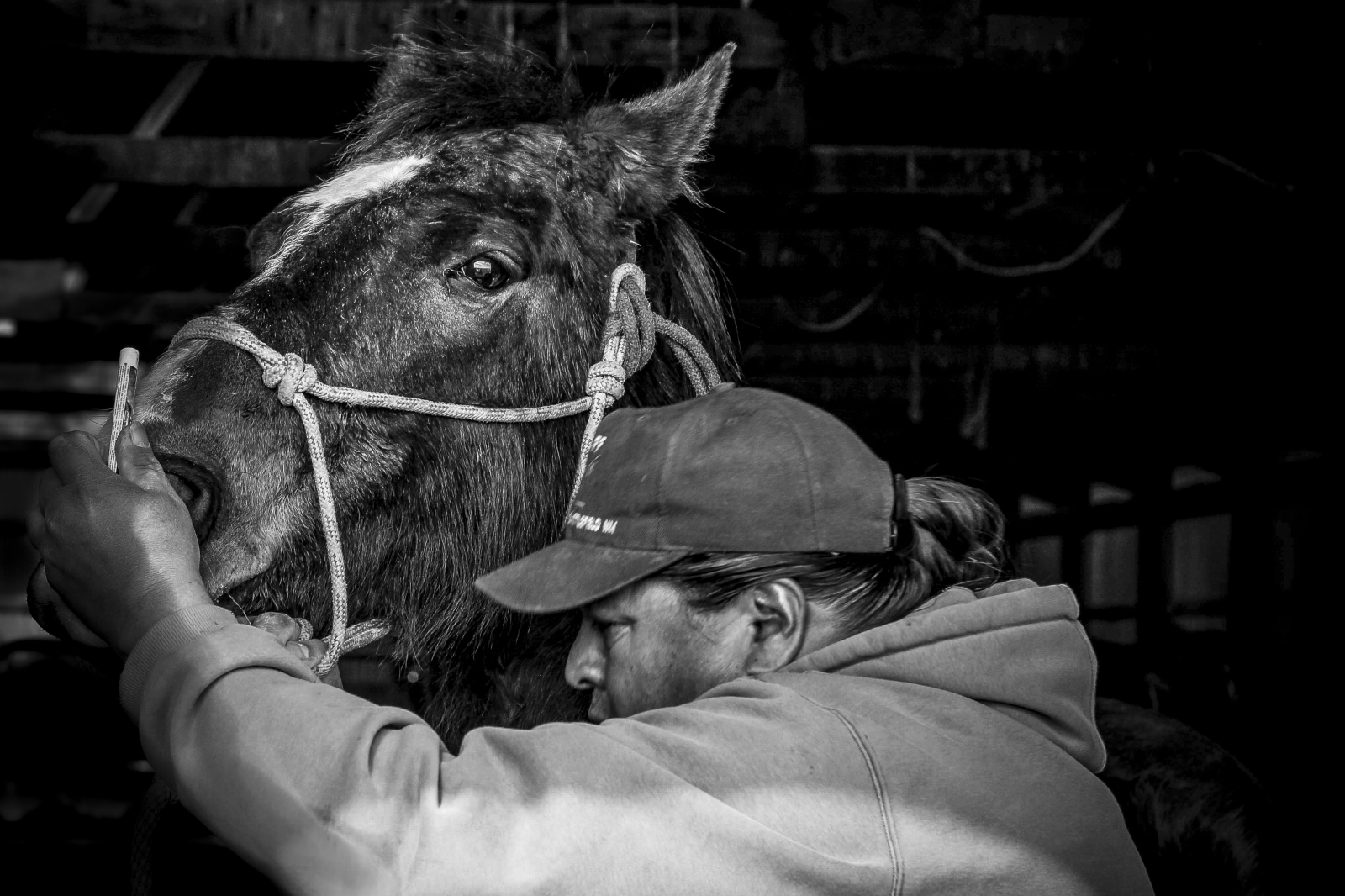 3 of 20 © 2021 Emily Schiffer
“I’m always interested in our history,” says James Picotte. “It’s here in our land where, where our relatives live. There’s no written history, it’s passed down orally, so being able to preserve that history is central to who we are. My favorite part of ranching is being to be able to work outside. I’m out there just enjoying the land, enjoying the different species of plants and flowers. I like to identify the plants I see, what they’re good for, there are lots of different medicines at different times of the year. Just knowing that they’re still there is important. That’s the difference between ranching and farming. Farmers use herbicides, which kill medicinal plants, they put the land into different state. But ranching allows the natural vegetation to thrive.”
©Dawnee LeBeau 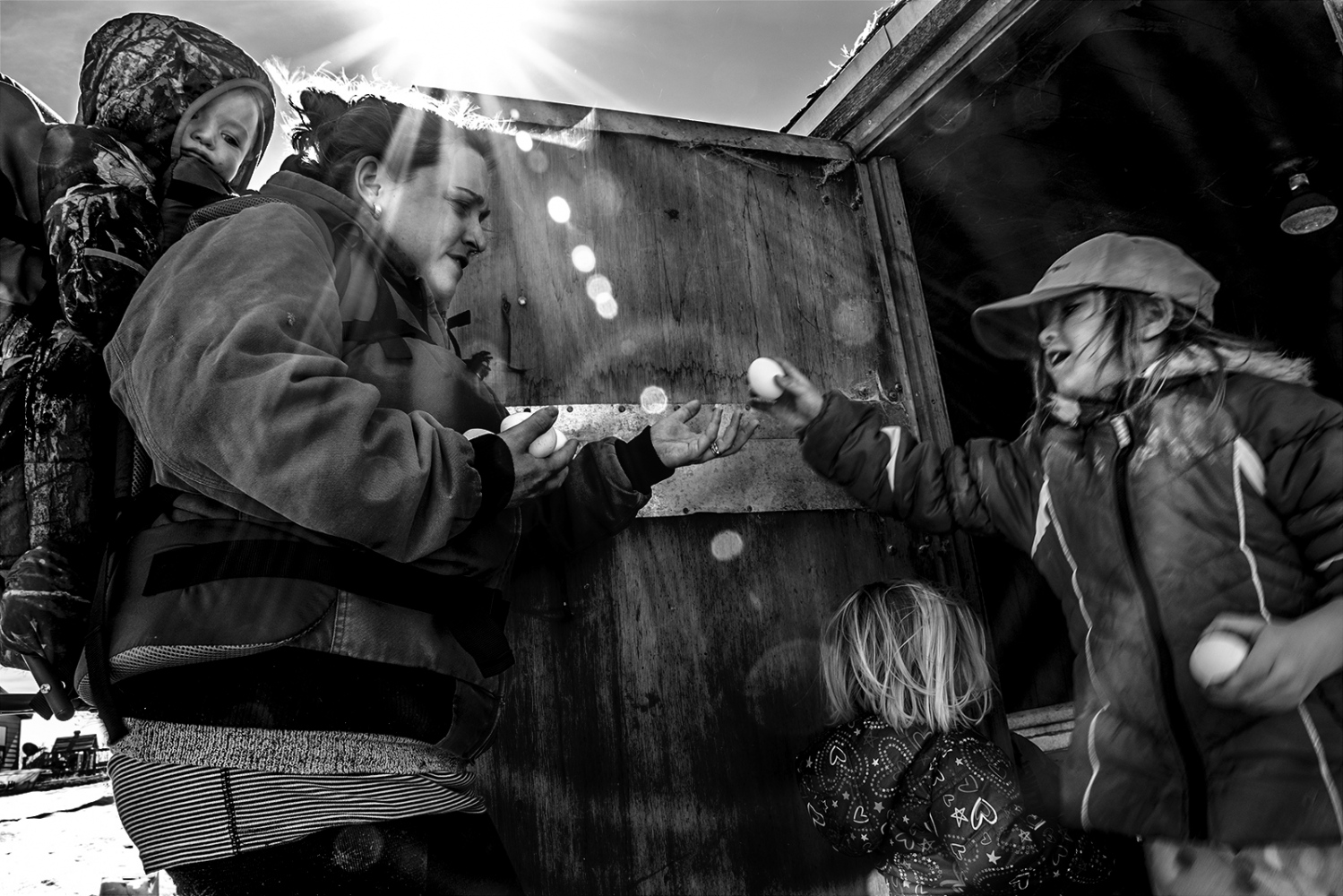 4 of 20 © 2021 Emily Schiffer
Ginny Webb and her three children collect eggs from their chickens. The chickens lay about a dozen eggs a day, which is far more than the Webb family can eat, so they donate them to various places including the local elderly home and food pantry.
©Emily Schiffer 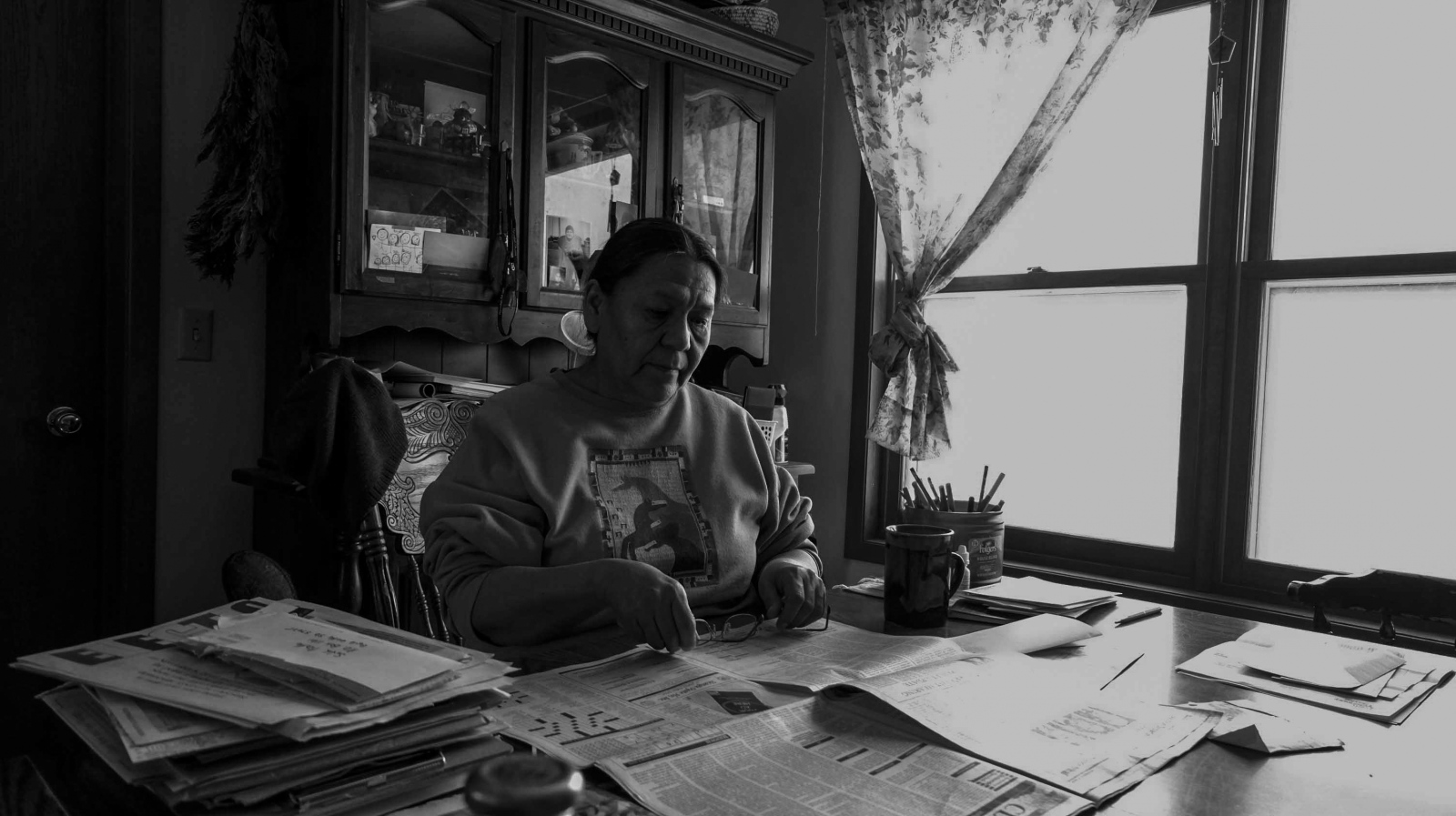 5 of 20 © 2021 Emily Schiffer
Sylvia Picotte relaxes with the paper in her home.
©Dawnee LeBeau 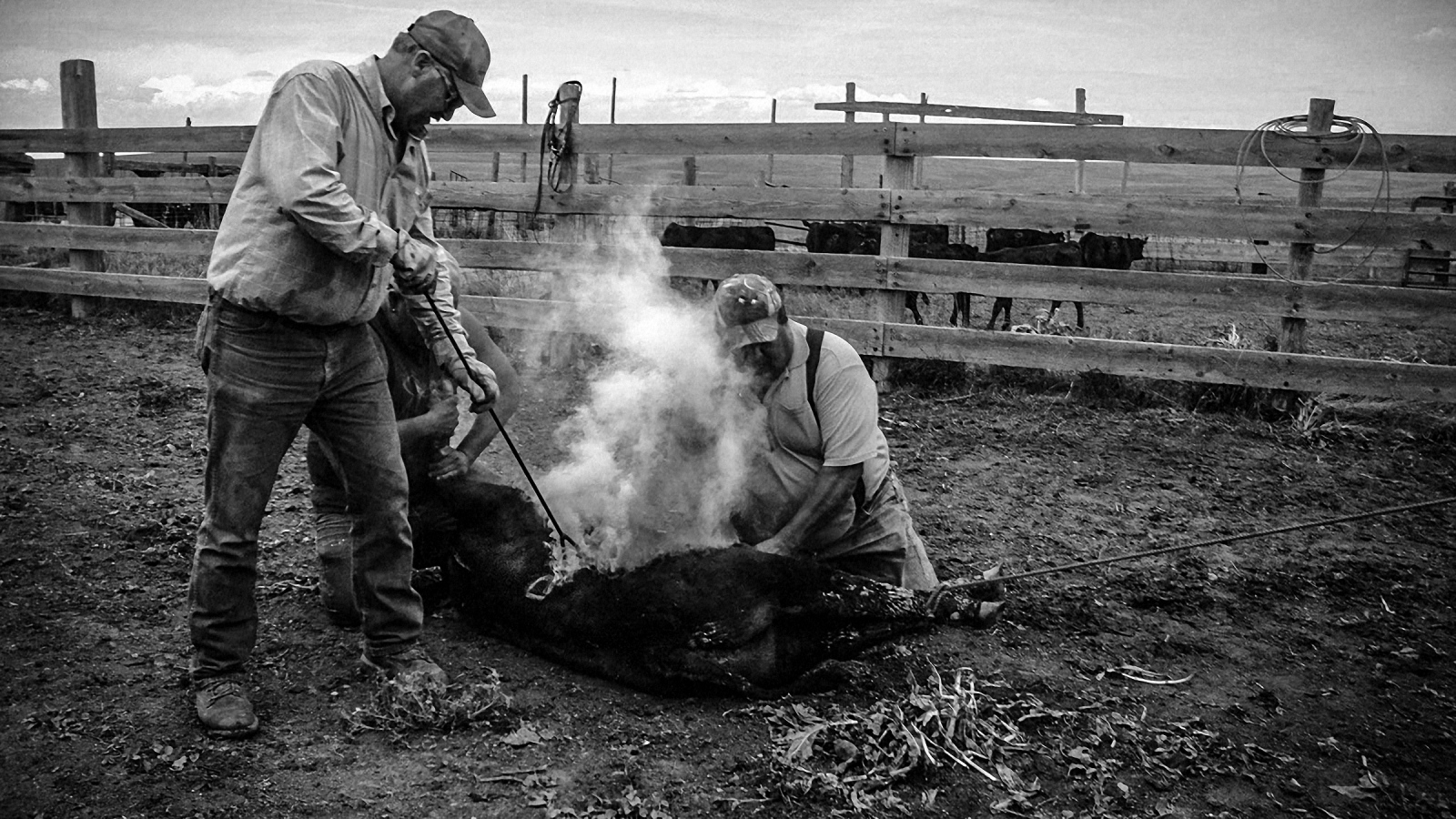 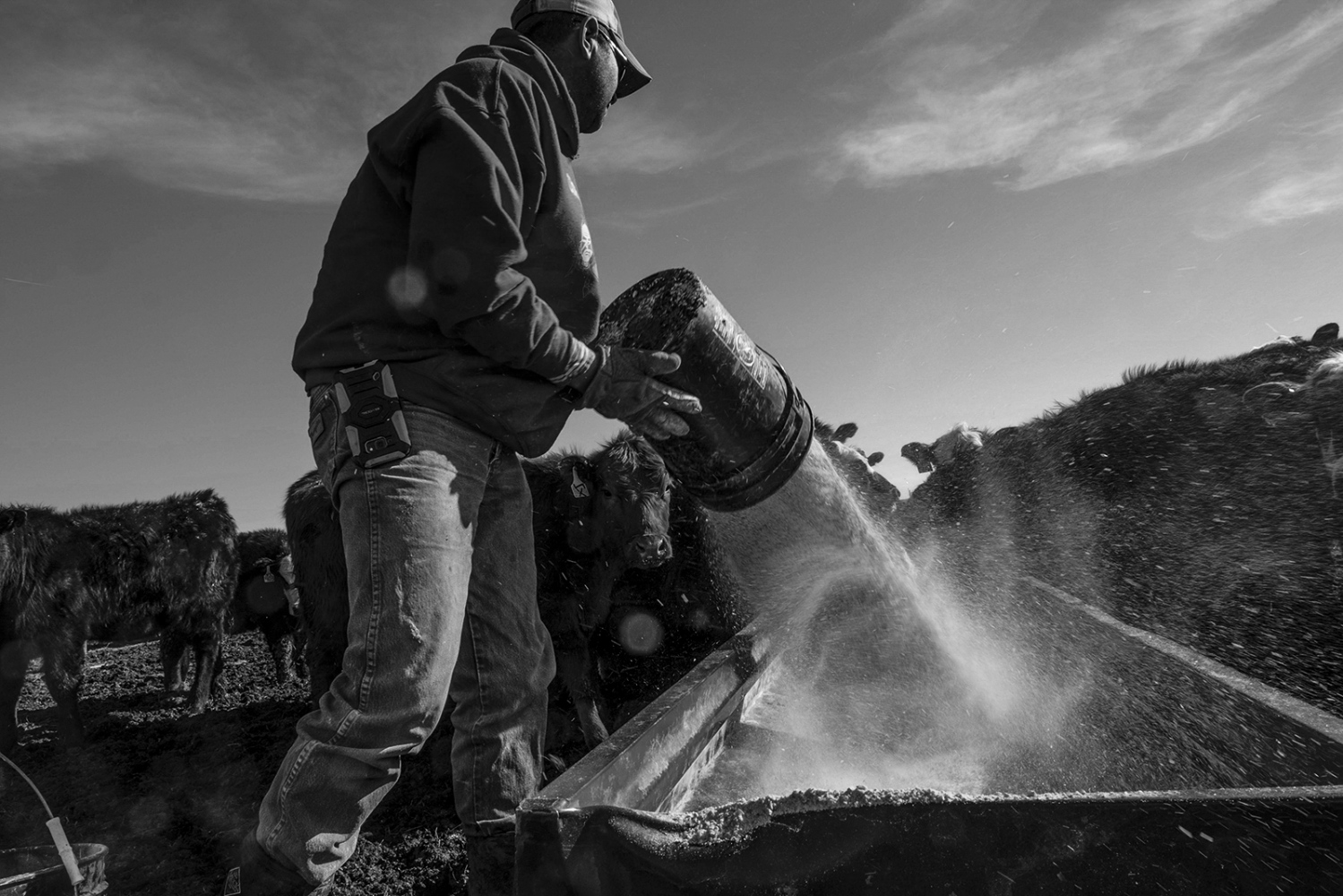 7 of 20 © 2021 Emily Schiffer
Aaron Webb feeds a pasture full of pregnant cows. The Webb family has about 250 cows. Grain provides more calories, and more sugar than dry hay, which gives them more energy while they are pregnant or nursing. Grain helps provide complete nutrition when grass is unavailable during the winter. During the summer they only eat wild grasses, and don’t need supplemental grain or hay.
©Emily Schiffer 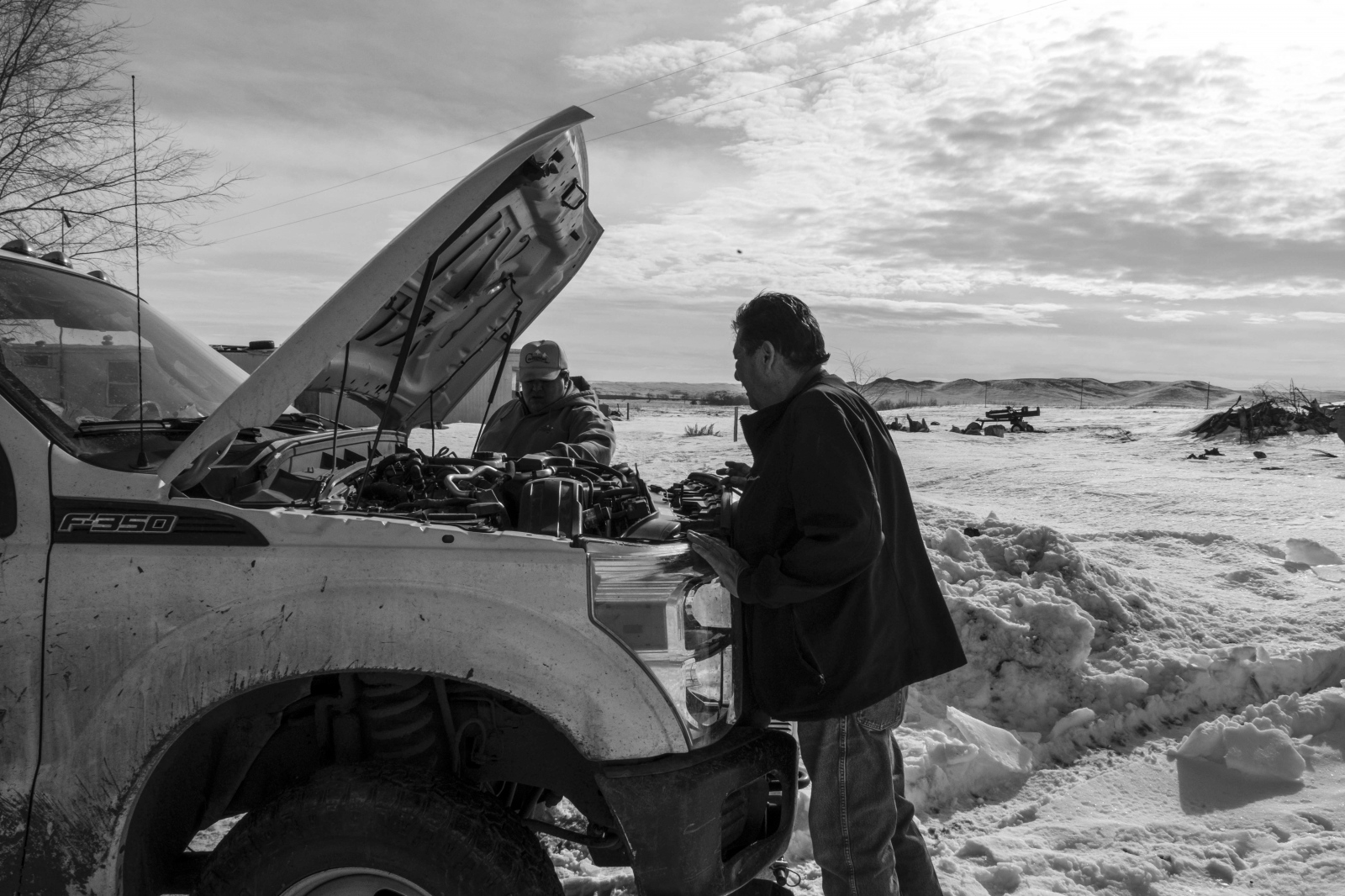 8 of 20 © 2021 Emily Schiffer
James Picotte and his brother work on one of their vehicles.
©Dawnee LeBeau 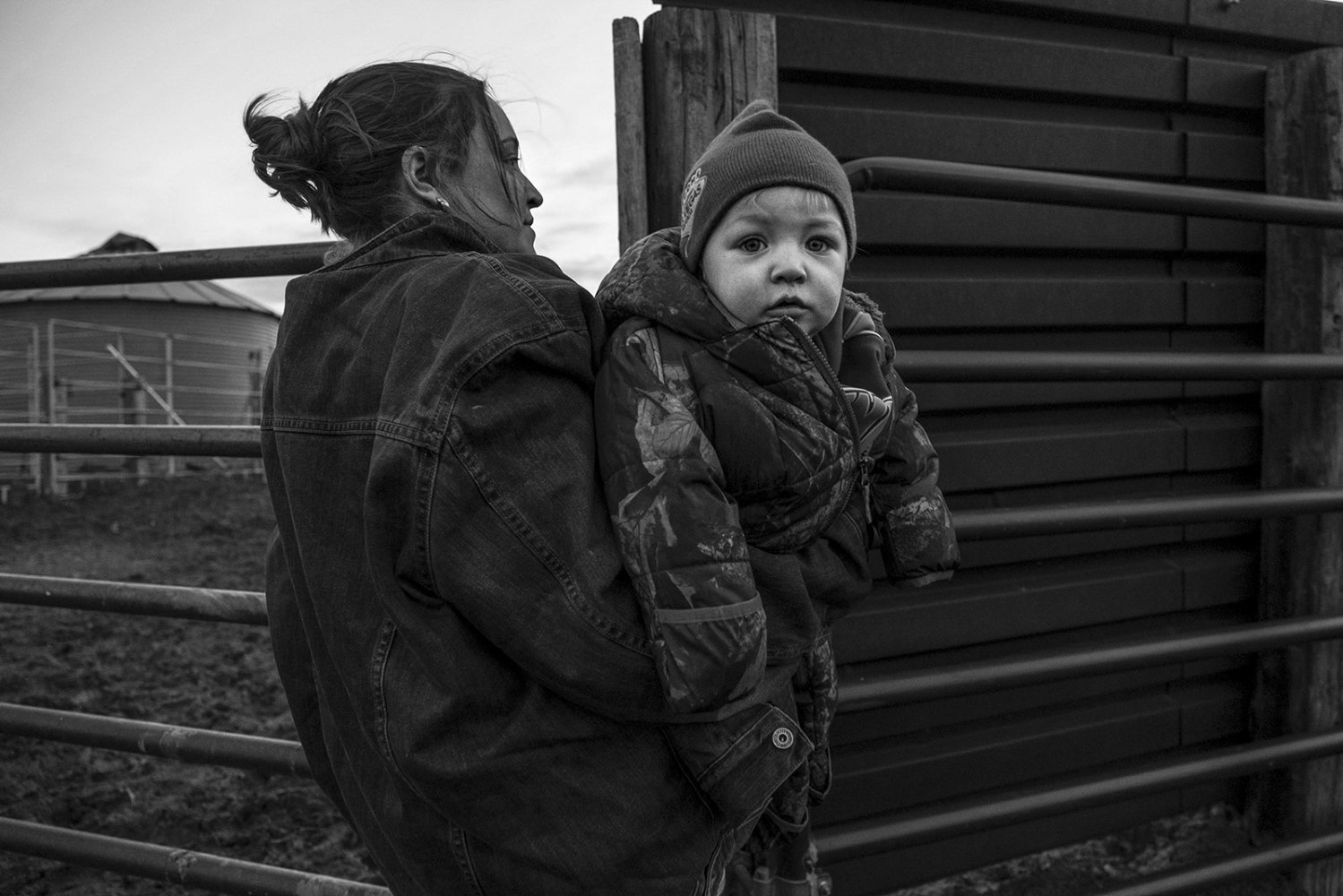 9 of 20 © 2021 Emily Schiffer
Aaron's great grandparents arrived on the plains of South Dakota in a covered wagon. They acquired land through the Homestead Act and built a tiny wooden homestead in the middle of nowhere. There were no vehicles, no roads, and no grocery stores or any other conveniences. They hooked up a team of horses to draw water from the dam, raised all the food they consumed and rode horseback to the country school. Aaron's grandmother on his father's side raised twelve children during the Great Depression. They survived by growing, baking and canning what they could. Now, Aaron's dad sees this as his legacy. He has never done anything differently, and rarely ever journeys into town. “Nowadays,” says Ginny Webb, “People are moving away from farming. Few kids get to grow up like ours are. We want to keep the legacy of family ranching and farming alive.”
©Emily Schiffer 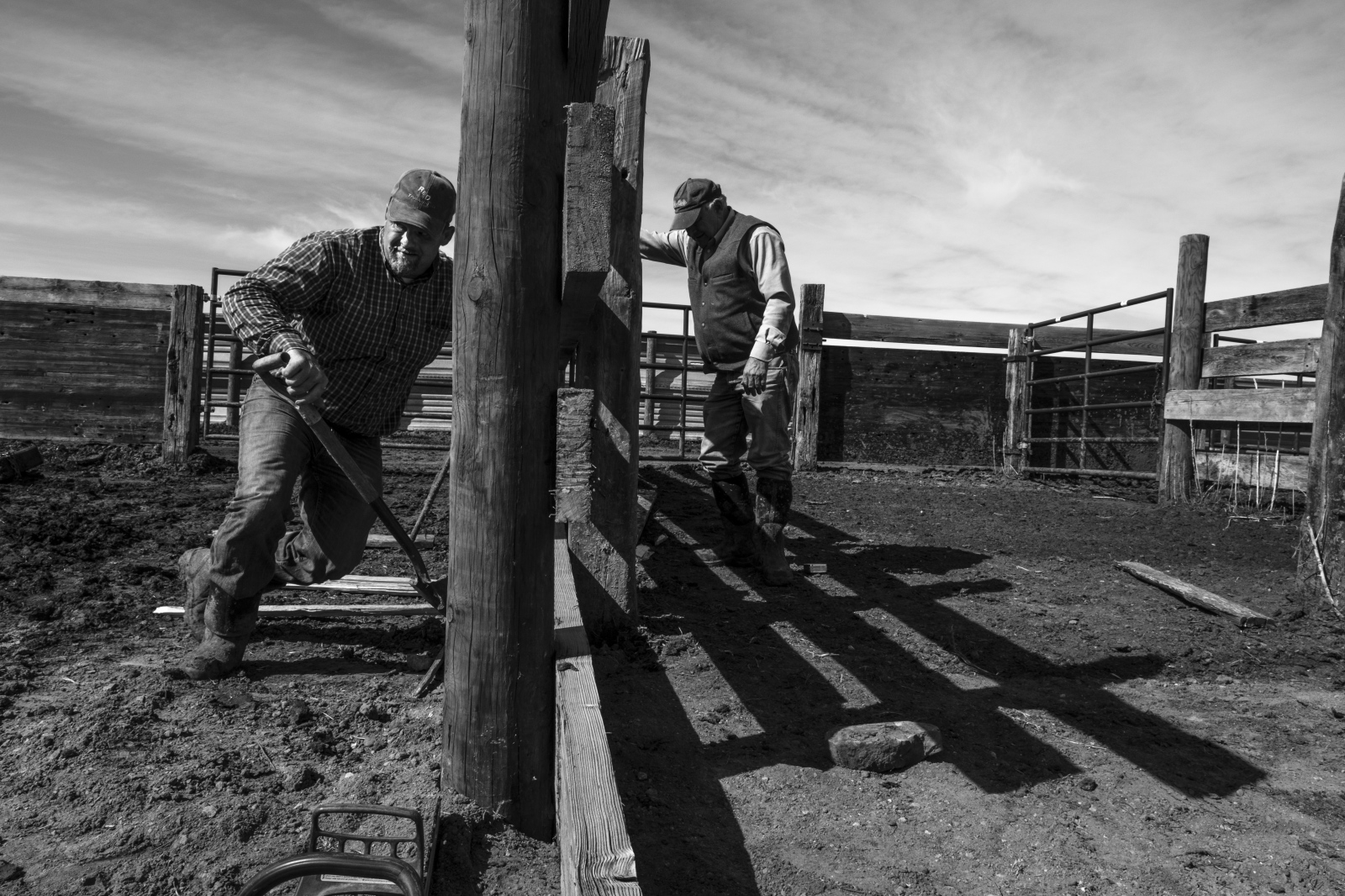 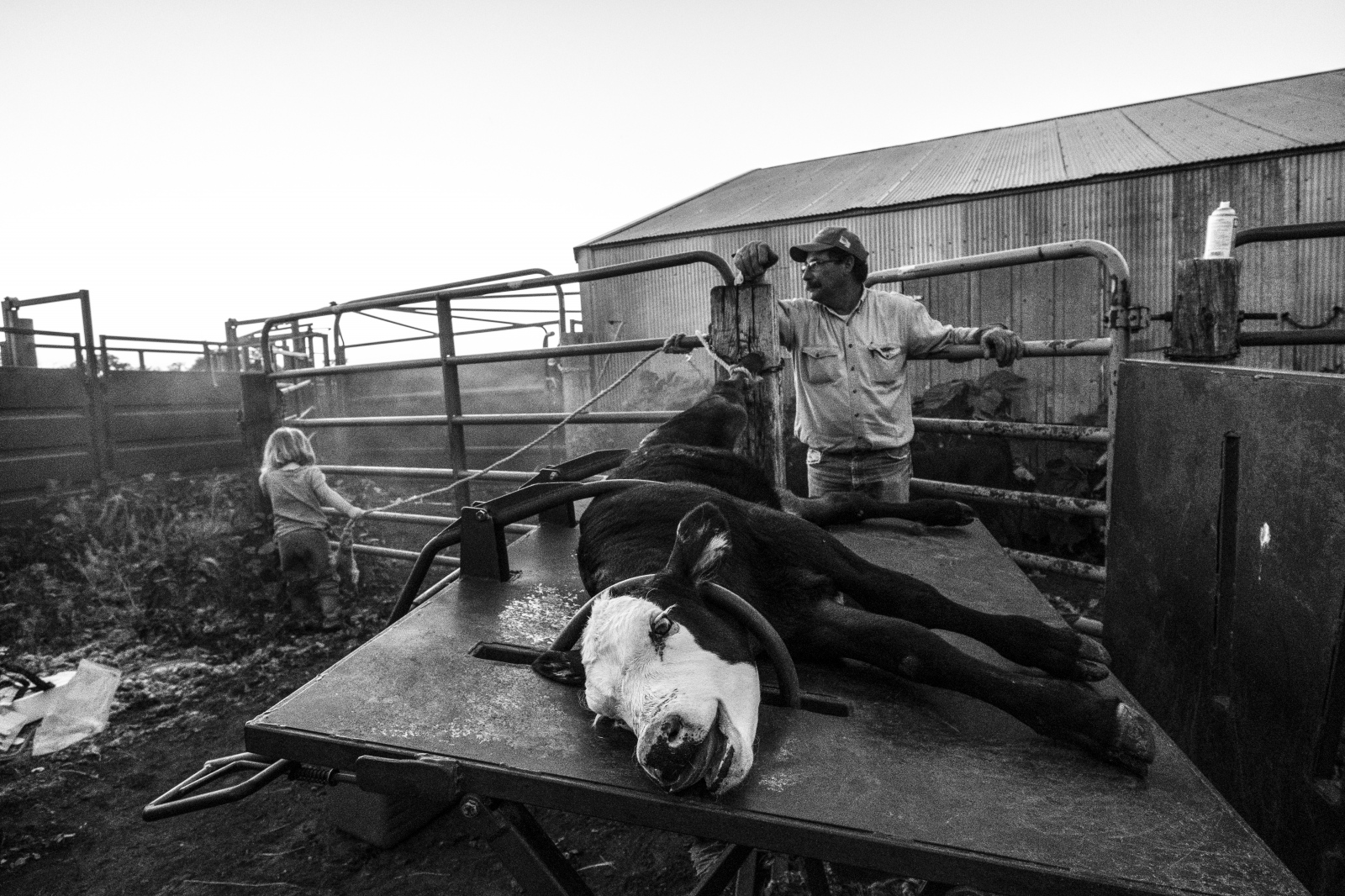 11 of 20 © 2021 Emily Schiffer
Three year-old Abbie assists her father and a close family friend as they brand, castrate, and doctor calves during the spring branding season. Here they use a branding table designed for this purpose, which allows fewer people to get the job done and is easier on the calves. Each calf takes less than a minute before they are returned to their mothers. Most ranchers are adept at tasks veterinarians perform in other parts of the country.
©Emily Schiffer 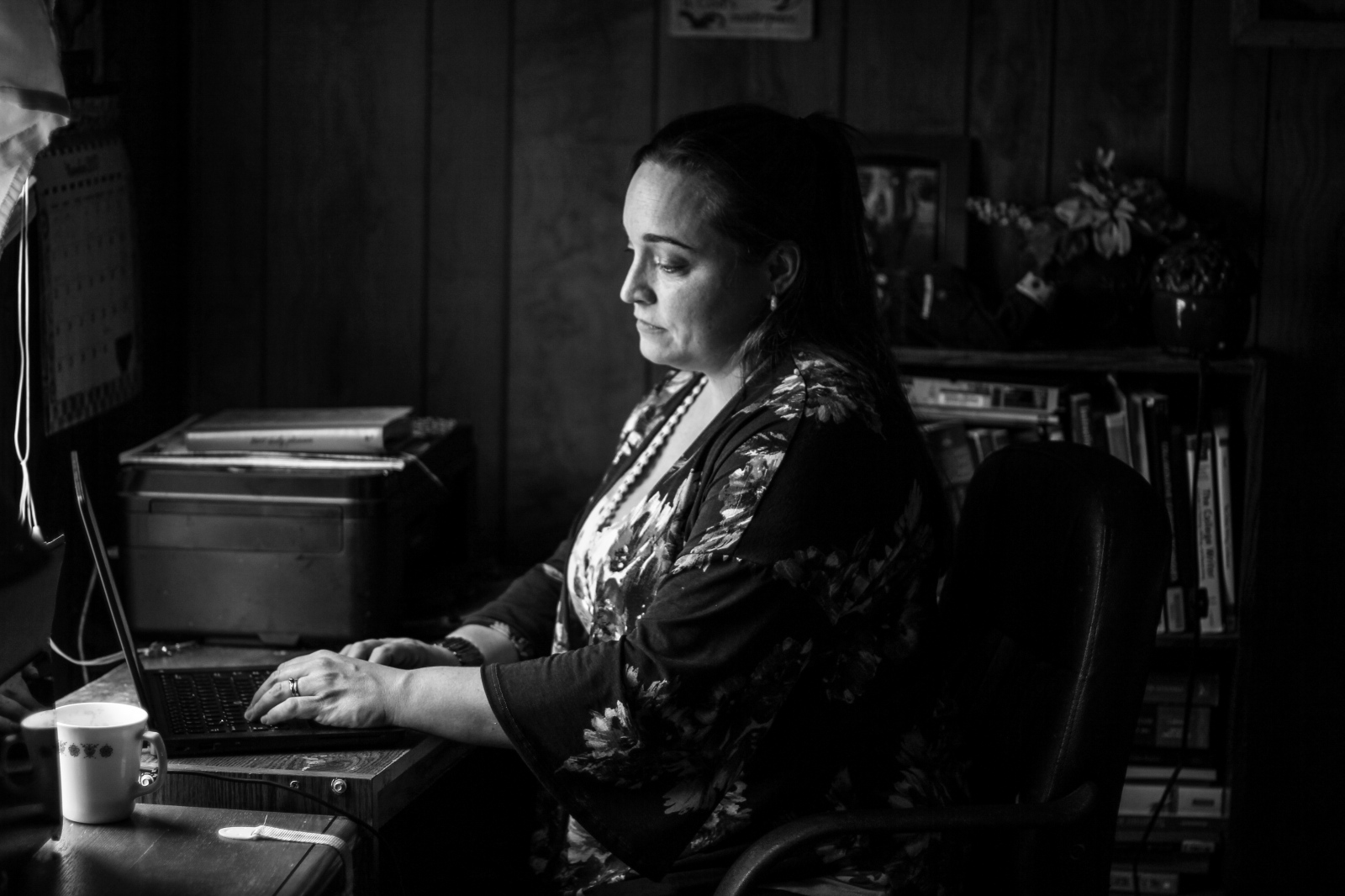 12 of 20 © 2021 Emily Schiffer
"Ranching isn't what it used to be," explains Ginny Webb. "My father-in-law supported a family of seven by raising and selling pigs, cows, and sheep. They didn't have much, but they survived and had the things they needed. Now, unless you're a big commercial farm, you really can't support yourself through the ranch alone. Livestock prices are too volatile and the world is just too damn expensive. Health insurance, vehicles, school supplies, the cost of food and diapers and a million other expenses add up to more than a family can earn through a crop of calves. Like many ranching families, my husband and I both have other jobs. My husband works in construction and I teach college English. You have to love ranching beyond the income or you won't make it!”
©Dawnee LeBeau 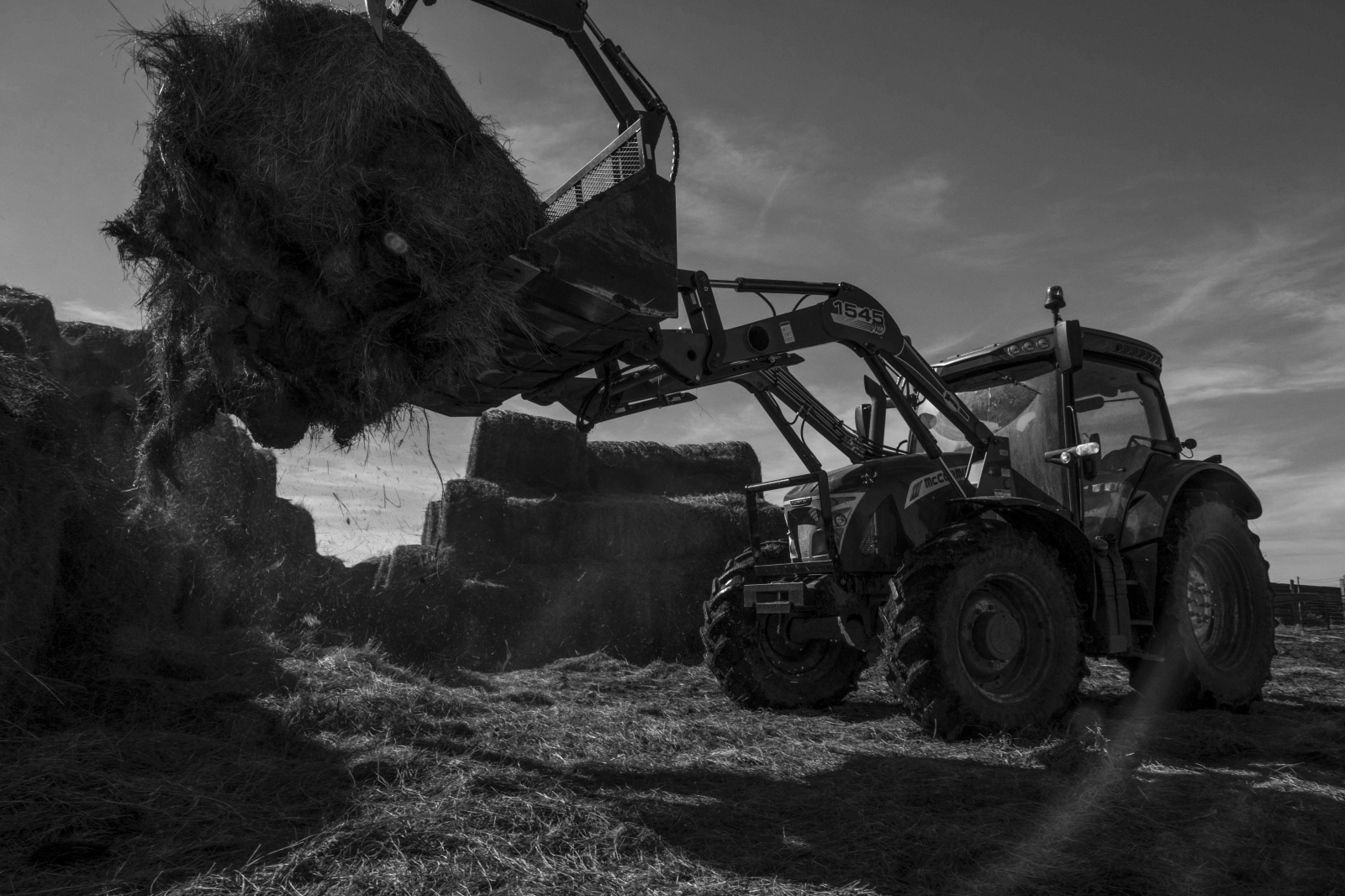 13 of 20 © 2021 Emily Schiffer
On a 900 acre ranch, pastures can be miles apart. Aaron Webb uses a tractor to bring hay to his cattle.
©Emily Schiffer 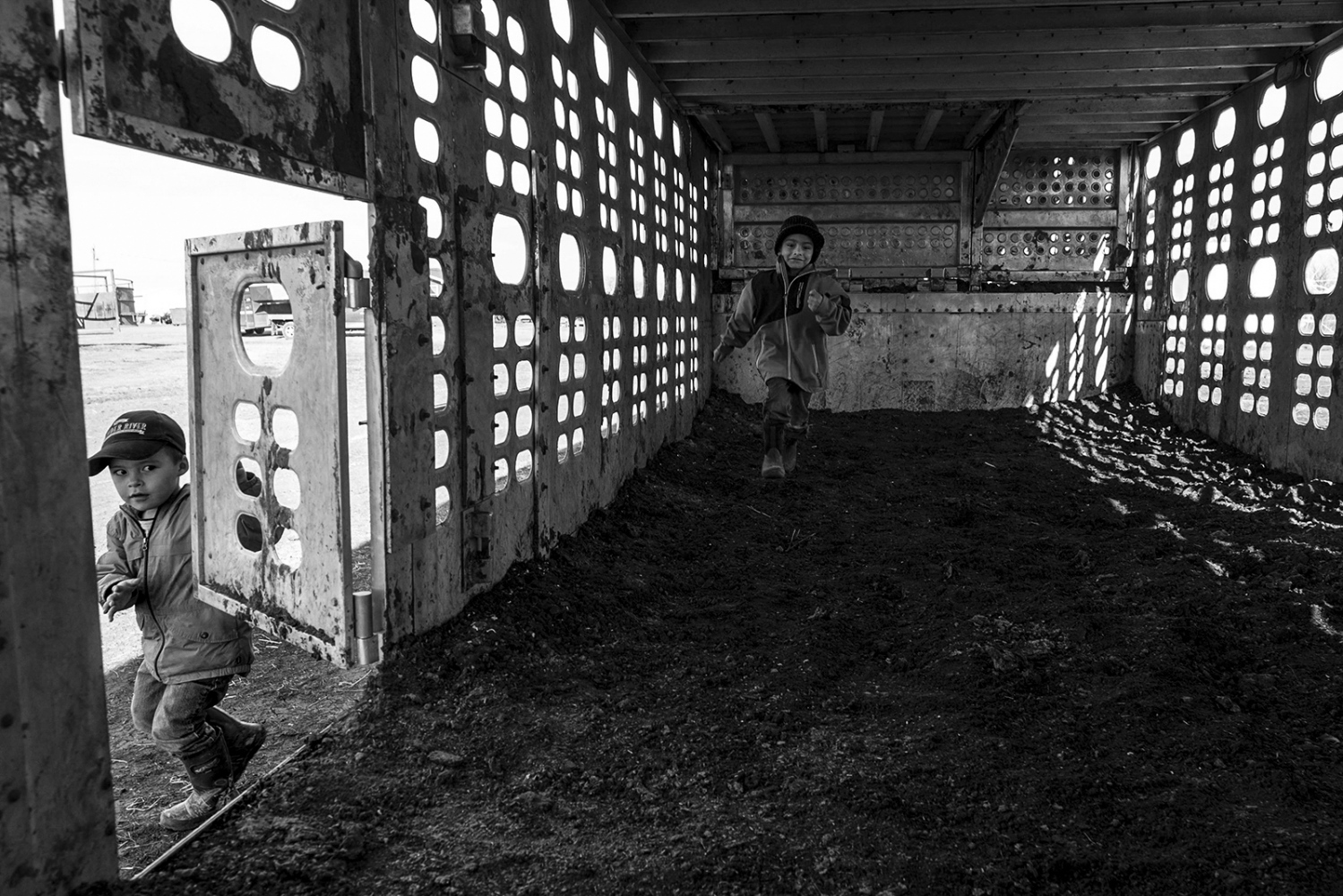 14 of 20 © 2021 Emily Schiffer
A cattle transport car serves as a climbing wall and fort for the Starr boys, who are free to explore and play on their family's ranch. Weather permitting, the boys spend their days outdoors. "It gives them a real independence, and they learn their limits real quick" says their mother, Jeri Starr, who is home full time with her young children while her husband works on the ranch. "Their imaginations amaze me.”
©Emily Schiffer 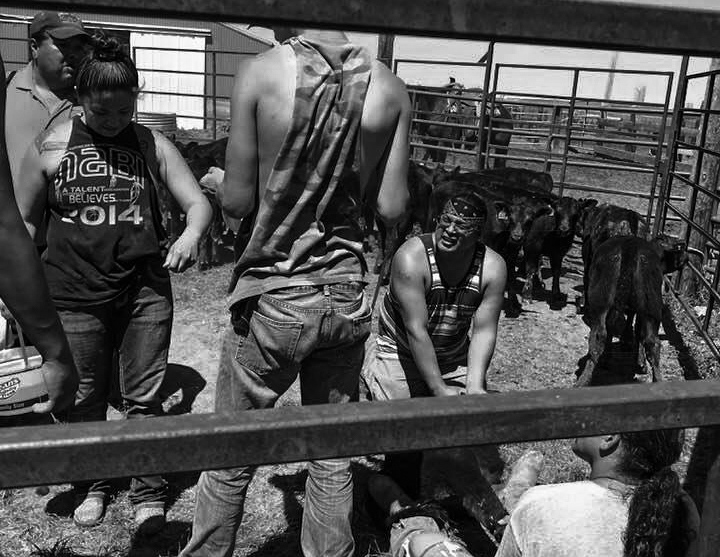 15 of 20 © 2021 Emily Schiffer
“Neighbors help neighbors, especially branding in springtime, and so you have a little community of neighbors who help each other out. Thats what I grew up with, and the way I see it should be, so if a neighbor needs help you do what you can. We repay each other by helping who helps us. Or for example, if we cut hay and some neighbors come to bail it, we split the hay 50/50. There are plenty of ways to pay each other that don’t involve money.” Explains Picotte.
© Sylvia Picotte 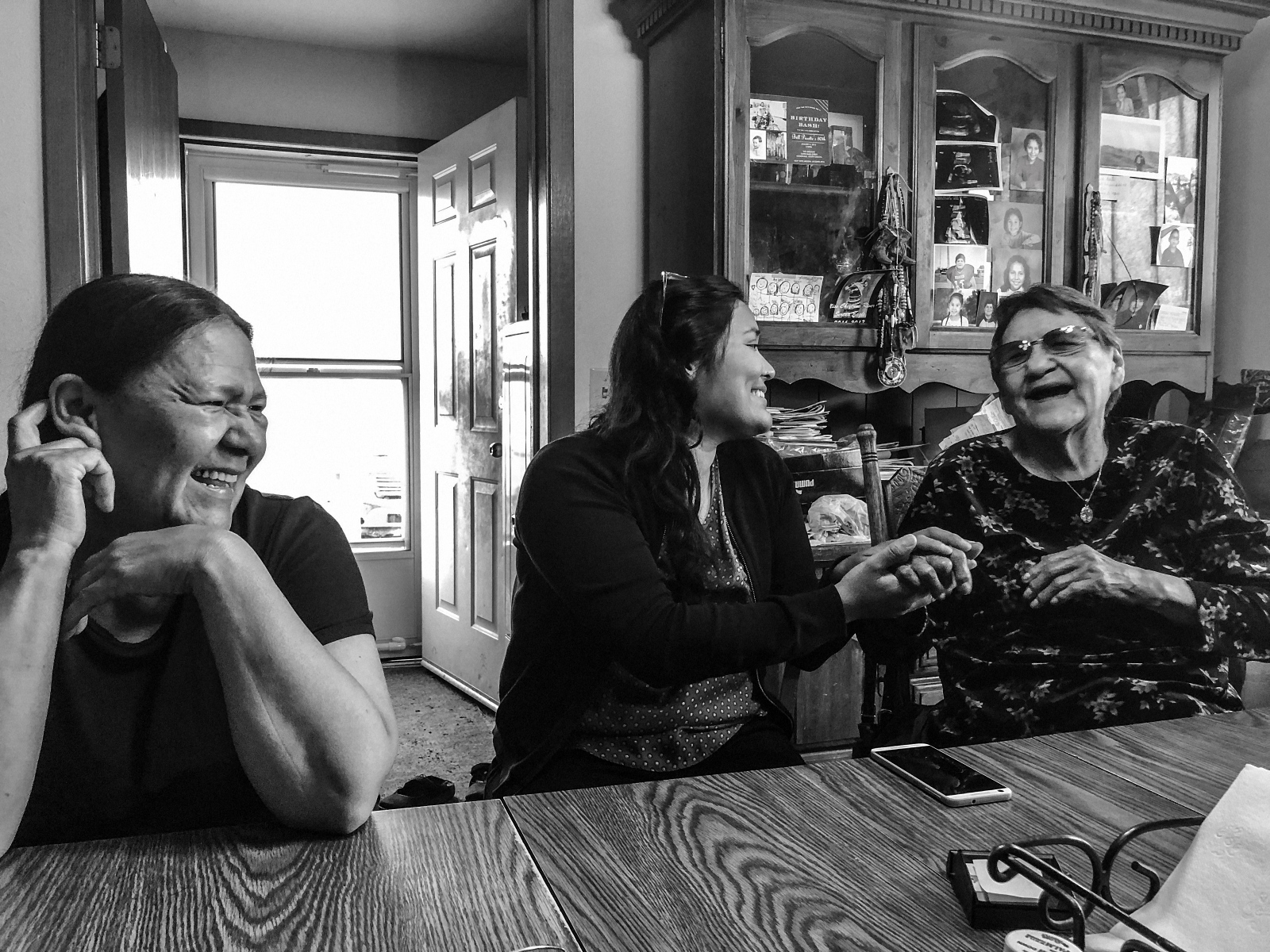 16 of 20 © 2021 Emily Schiffer
Sylvia Picotte, Parvannah Lee and Marge Clown, visit and laugh at the table during a family gathering.
©Dawnee LeBeau 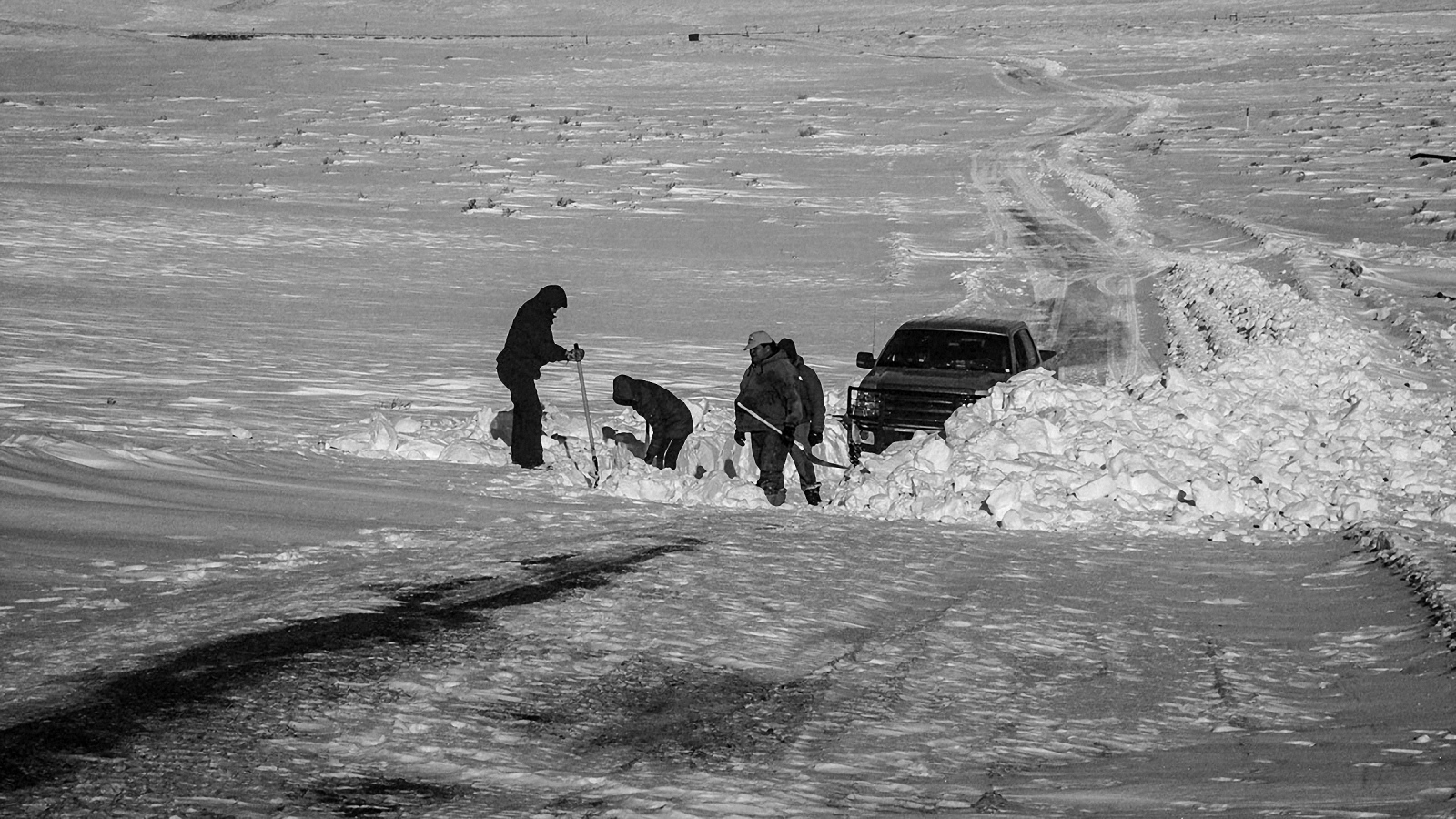 17 of 20 © 2021 Emily Schiffer
South Dakota endures extreme winters, with temperatures reaching as low as -40 Fahrenheit. Blizzards are common from late October through March. The Picotte family lives 20 miles from town, and after four days without any sign of the municipal plow, the family took matters into their own hands and decided to shovel themselves out to the road.
© Sylvia Picotte 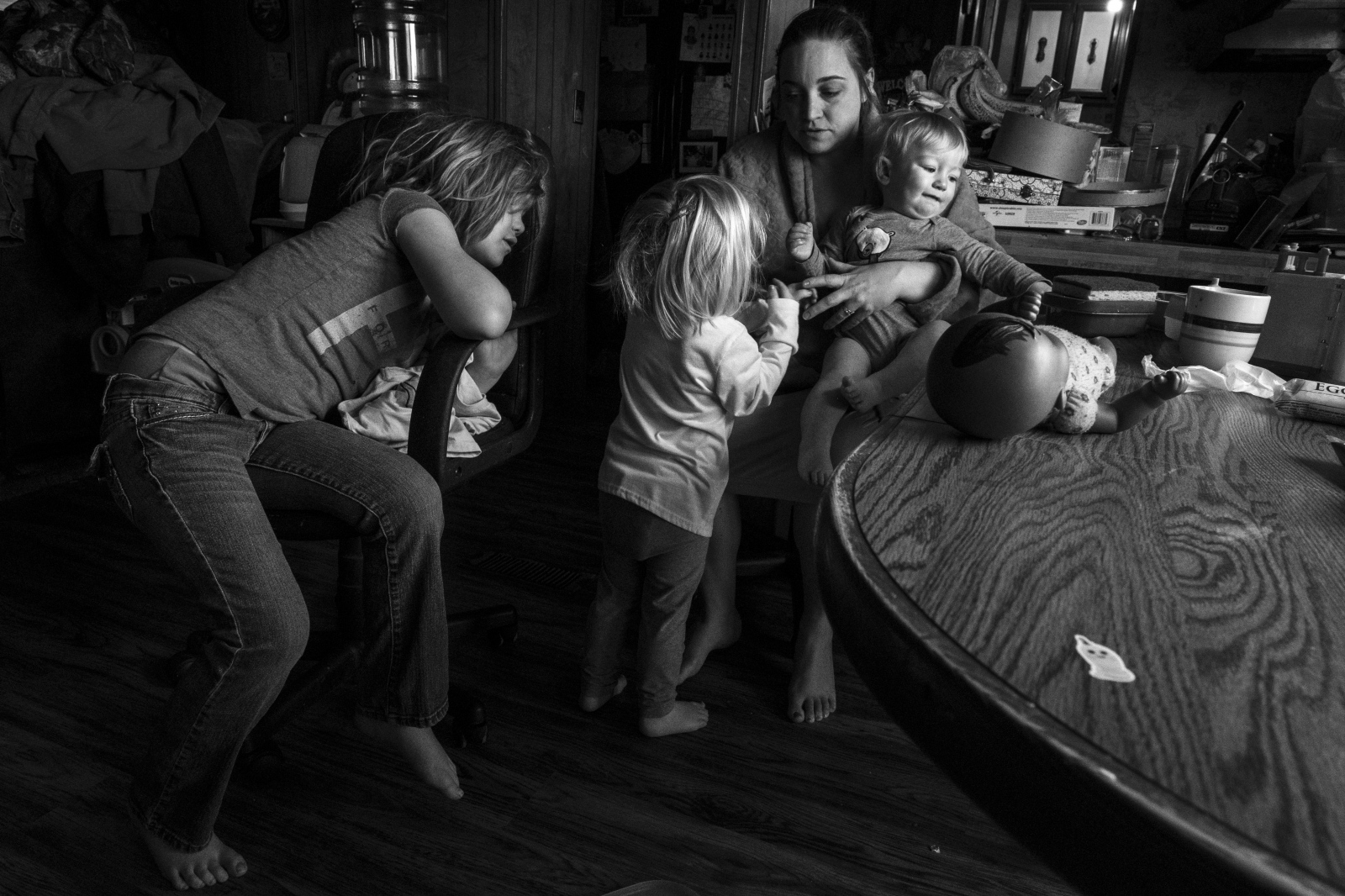 18 of 20 © 2021 Emily Schiffer
Ginny and Aaron Webb were snowed in with their children for several weeks after back to back blizzards. Feeding cows after the storm proved difficult, the Webb family was lucky, their cows survived, but many of their neighbors lost cattle in the storms.
©Emily Schiffer 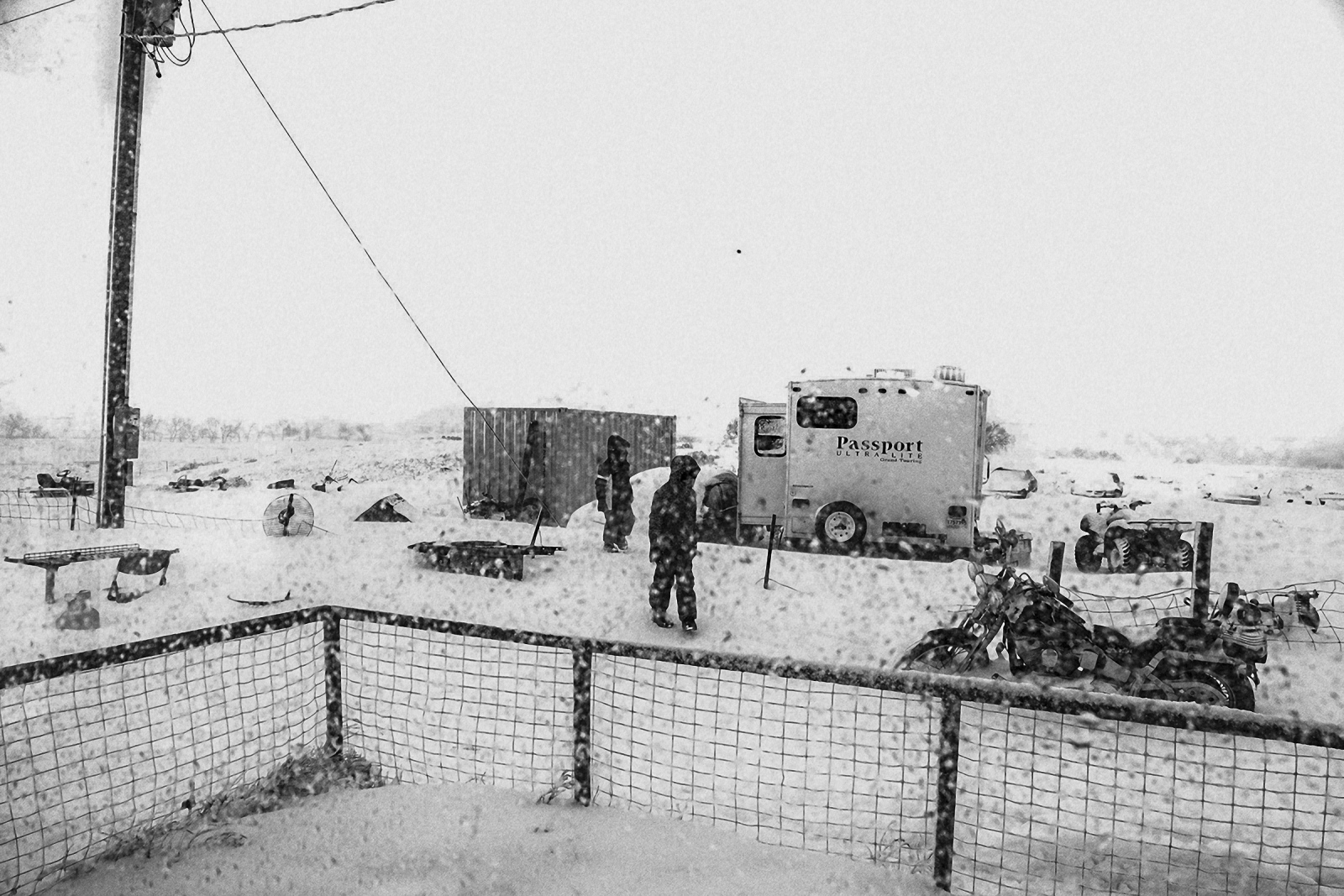 19 of 20 © 2021 Emily Schiffer
Only a few feet of snow fall in any given storm, but the wind, ice, and extremely low temperatures that accompany the blizzard create deadly conditions. Last year the Picotte family was snowed in for two weeks, with no way to get out. Even a regular tractor couldn't get through, and for a while the municipal snow plow couldn't access them. School was closed for two weeks because families living in the country couldn't get into town.  Anjali Sky Knife and her sister Preslyn Dupris wanted to sled, but the harsh conditions sent them back indoors after only ten minutes.
©Dawnee LeBeau 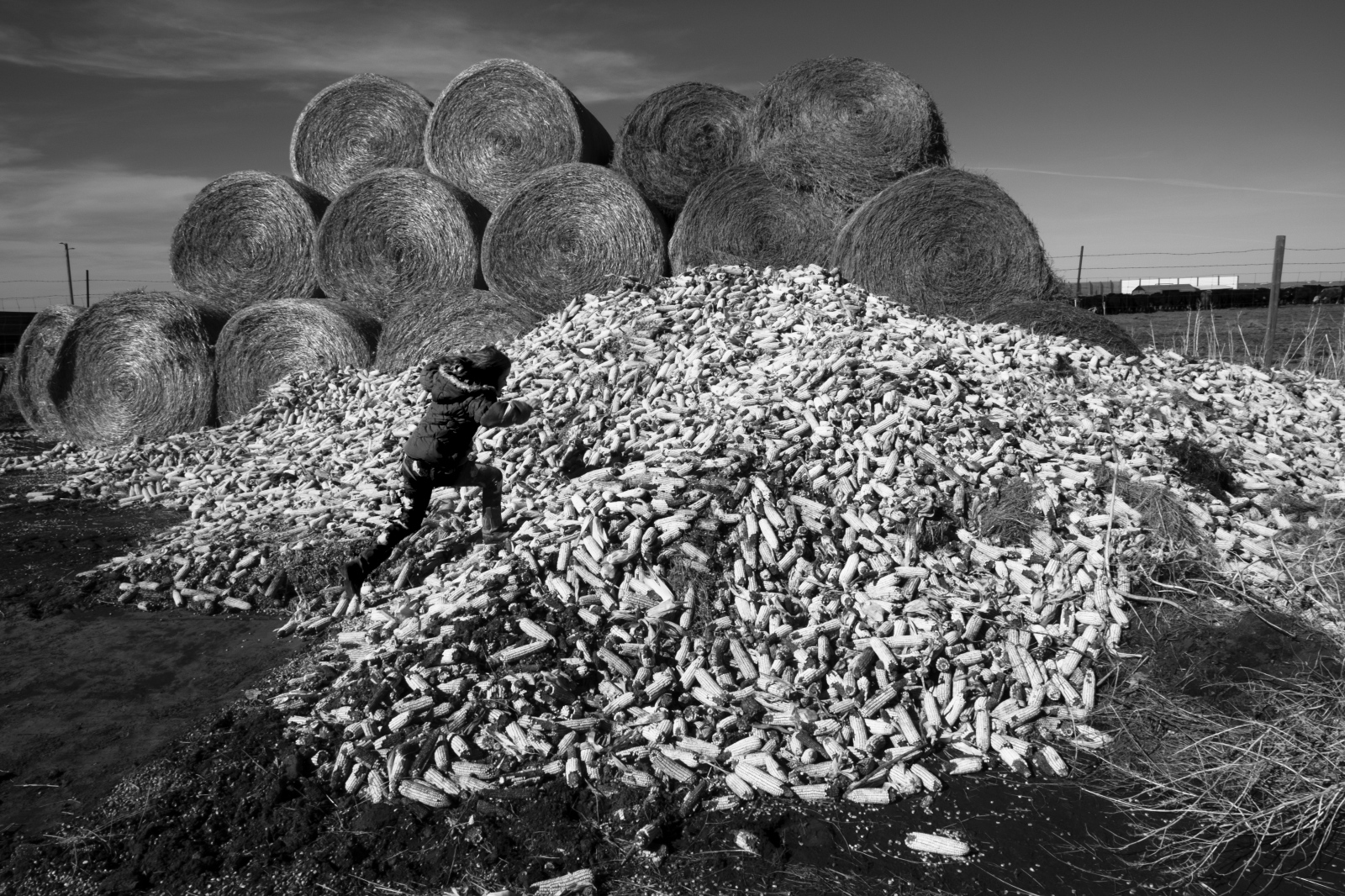 20 of 20 © 2021 Emily Schiffer
"Every year our cows go through at least 100 tons of corn." Explains Aaron Webb. "We buy it from a local coop, because our ranch raises livestock, not crops.” 8 year-old Megan Webb climbs up and slides down her family’s corn mountain while her father feeds their cows. Corn and hay carry the cows through the winter, when snow blocks their access to grass.
©Emily Schiffer
Private Story
RanchingontheRez
Copyright emily schiffer 2021
Updated 11/27/18
Archived as
This project was funded by a grant from the Economic Hardship Reporting Project. It is a collaborative project, shot by myself, Dawnee LeBeau, and Sylvia Picotte.
These images portray an essential part of life on the Cheyenne River Reservation, which is often overlooked by outside media.
At first glance, the cattle-dotted hills of the Cheyenne River Reservation’s ranches are indistinguishable from other Midwestern landscapes. But these four-thousand square miles are the product of a different narrative. The families who have lived here for generations can’t easily be separated into binary notions of cowboys and Indians. These images offer a window into the specific culture that exists here, which includes a diversity of people and a way of life that is a lesser known America: a small rural reservation community, where tribal and non-tribal ranchers work together and depend on each other for the survival of their herds in a harsh, unforgiving climate.
This tightly knit ranching community is home to descendants of settlers who live on inherited plots of land that trace back to the Homestead Act, as well as Native ranchers, most of whom took up ranching at the US Government’s incentives after their tribal land was flooded for the Oahe Dam. Perhaps because people can so clearly trace their histories, and because both populations regularly intermarry, both histories are recognized. People depend on each other because they couldn’t survive otherwise. Ranching is back breaking year-round labor. But with the increasing numbers of factory farms in other parts of the country, most ranchers take on extra work in order to make ends meet. Still they choose to stay on the reservation and continue ranching, and they choose to raise their children on the reservation, where ranching families in general and white families in particular are the minority.
The Enlarged Homestead Act of 1909 encouraged a large westward migration of white farmers West of the Missouri, where they resettled on federally issued 320-acre homesteads amidst the plains of the region.  Destinations included the Cheyenne River Reservation in South Dakota, thus leading to the integration of white settlers and colonial farming practices into life on the reservation.  Cattle ranching remains an important industry in South Dakota over 100 years after the act was signed into law.  Today, the Cheyenne River Sioux Tribe owns about half of the reservation land-- it leases 900,000 acres to ranchers, and an additional 400,000 acres are owned by individual Native Americans. The remaining 1.3 million acres are deeded to non-Natives under the Homestead Act.
As US agriculture continues to shift toward factory farms, the viability of family farms is diminishing. Unlike their better known and wealthier counterparts in Texas, South Dakota ranches are small, family owned operations, which generate only modest income. The rolling hills and arid soil of the Cheyenne River Reservation don’t lend themselves to industrialized agriculture. Ranching families are faced with the dilemma of continuing in an industry they can’t keep up with, or leaving the only way of life they’ve known. Many young people from farming families leave the reservation to pursue more lucrative work. Those who remain are steadfast in their dedication, often taking on full time employment in town to carry them through the unpredictability of farming profits. This project follows three ranching families to explore the history of ranching on the Cheyenne River Reservation.

By Emily Schiffer — Here, I hold space for our family. For our histories the individual struggles and triumphs the genocides,..
Apr 19, 2021

Lit Hub: What We Want You to Know About Mothering Small Children in a Pandemic

By Emily Schiffer — At 16, six people in my family died and I followed an all encompassing drive to make photographs. I..
Mar 18, 2021

By Emily Schiffer — Let me know which images you're interested in and I'll provide more detailed captions.
Oct 24, 2019

By Emily Schiffer — Click on an image to enlarge. Use arrow keys for slideshow.
Dec 18, 2017

By Emily Schiffer — Quiet moments capturing people and relationships (Click on the images to enlarge)
Sep 13, 2017

Ranching on the Reservation

By Emily Schiffer — The Enlarged Homestead Act of 1909 encouraged a large westward migration of white farmers West of the..
Sep 13, 2017