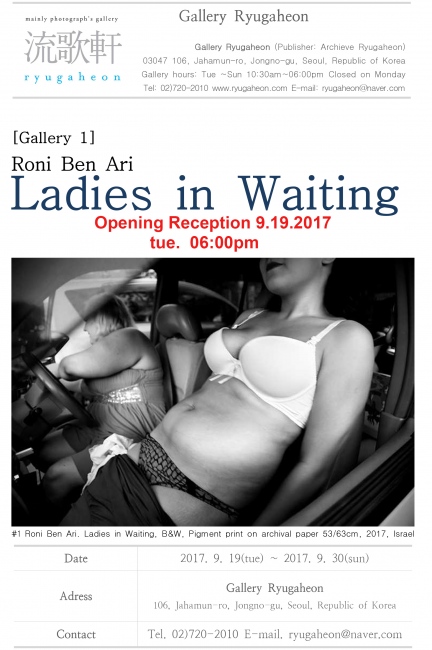 The presence and daily life revealed in “waiting”

These are officially recorded number of prostitutes. A number of them live together

in life with us, but they are invisible. They are denied their ‘presences’. Even

though they are clear entities, no photographs are allowed to be taken lightly.

With this background, <Ladies in Waiting> that is first released in Korea of Israel

photographer Roni Ben Ari is unfamiliar in many perspective. Prostitutes in the

picture are natural, whether they are partially exposed to the body, body

movements, or any situation. It’s hard to believe that there were the photographer

Israel, Russia, the Netherlands, India... Although there had been countless scenes of

prostitution, what Roni Ben Ari focused on was normal ‘daily life’ of prostitutes.

Like the title <Ladies in Waiting>, she captured ladies who ‘waited’ for the

customers. Women in the photographs eat their meals, dry their hair, and choose

clothes to wear. They also play with dog, and laugh, chat or play together. All the

daily routines are between customers.

“They are everywhere. But they don't exist anywhere. And I wanted to tell you

that, in my pictures, that they existed and they spend the same time in the same

space as ours, and live a life that is not significantly different from us.”

study as a researcher, and began her career as a photographer since 1996. Her

works are characterized by long term studies on social issues such as immigrants,

gypsies, and the elder. With her camera she present their daily lives and humanity

as a mirror to the cultured world that ignores their very existence. Many projects

shadows, with the photographs serving as a kind of journalistic essay, the role of

which is to prod government bodies, NGOs, and private initiatives into action to

expand the laws protecting the weak and enforce them.

countries such as Israel, the Netherlands, Russia and India since 2015. In a society

that has been separated them as different group for a long time, the daily scenes

of prostitutes, paradoxically, tend to look strange and emphasize the uniqueness of

By Roni Ben Ari — Excited to invite you to my solo exhibition in MLB projects SPACE along with VU & LEICA Opening on ..
Jun 26, 2019

The World Through My Eyes

By Roni Ben Ari — I invite you to see my work exhibited in a new exhibition in valid gallery, Barclona, Spain . As..
Apr 8, 2018

Magnum Photography Awards 2017 Congratulated me on an impressive accomplishment

By Roni Ben Ari — I"m happy to share with you all a massage i recived  from Magnum photography awards: "Your entry to the..
Oct 29, 2017

these are the 3 works that were choosen to be exhibited in the: 2017 DongGang International Photo Festival