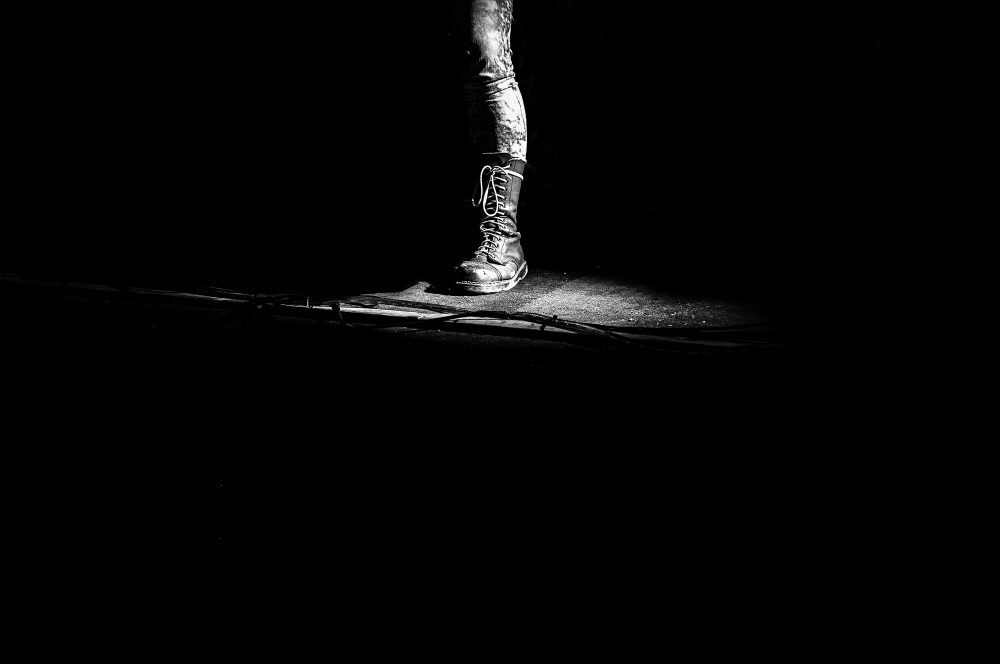 Doc martens. Created by the german doctor Klaus Martens. These boots have been very used by the punk and skinhead movement. During the 70's groups such as Sex Pistols and The Clash introduced the punk aesthetic as a symbol of identity. 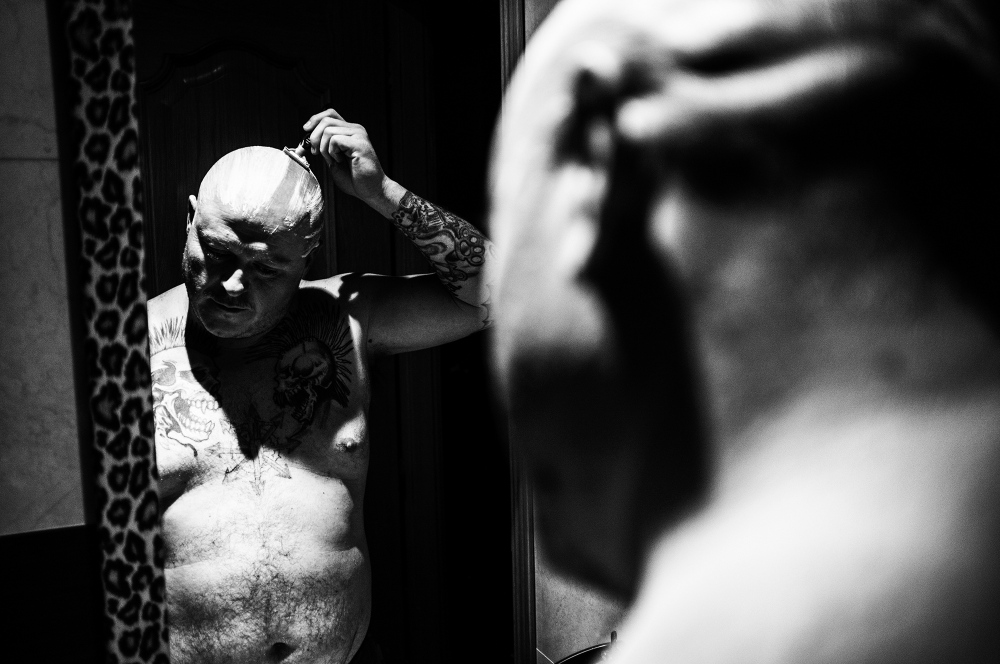 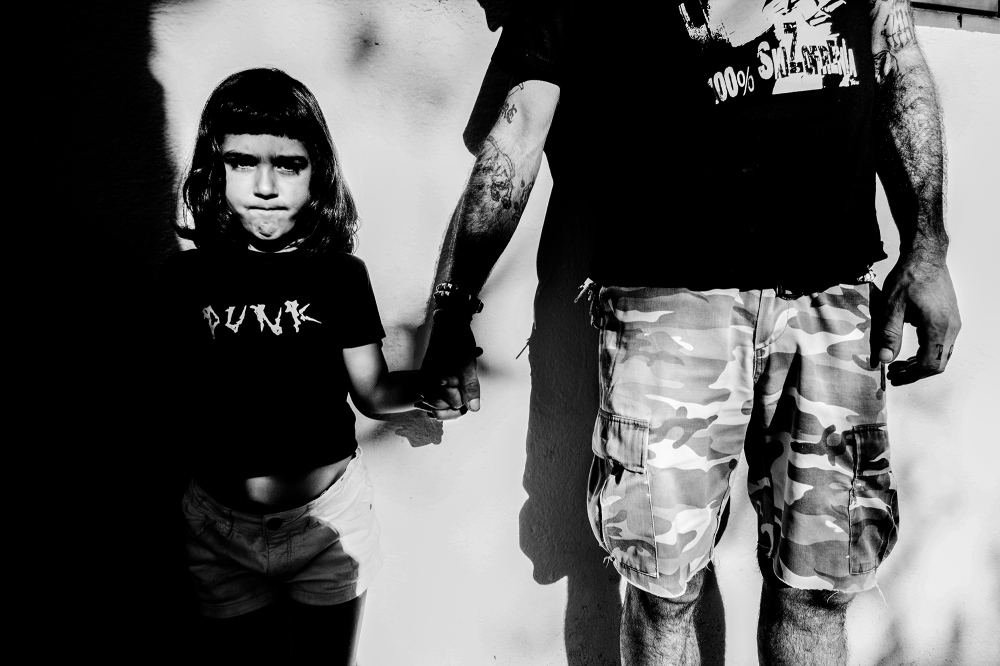 Father and daughter posing. I wanted to tell stories of punkis with children starting from young people in punk philosophy. 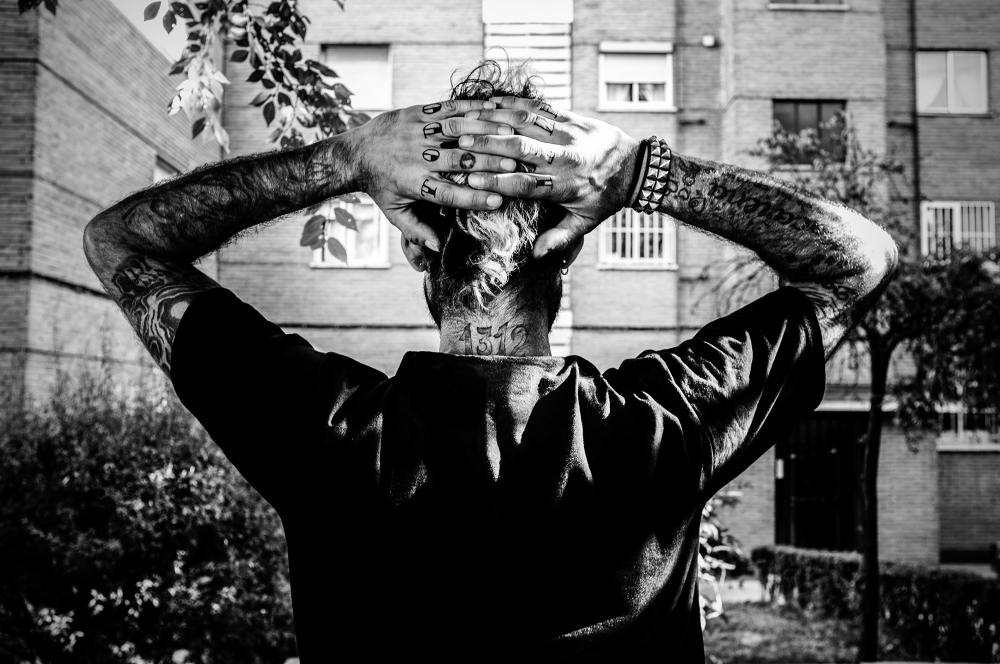 4 of 25 © 2021 David Arribas
1312 tattoo indicating the position of the letters “ACAB” in the alphabet. The 4Skins group (1979-1984) made their theme “ACAB” (“All Cops Are Bastards”) very popular song. With a skin head aesthetic, their lyrics showed daily life topics, social problems and violence in the UK. 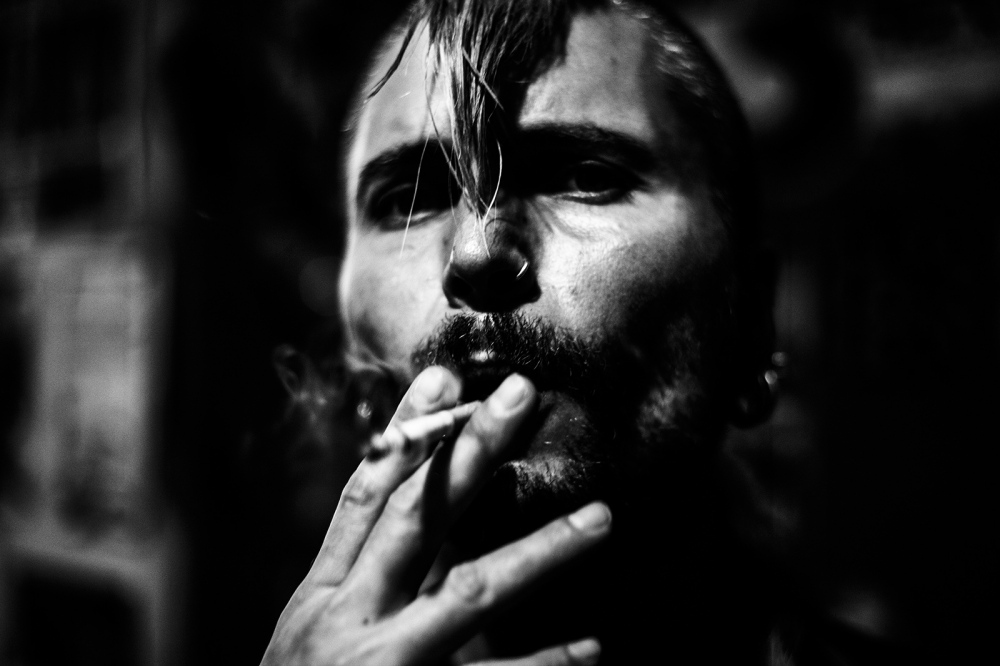 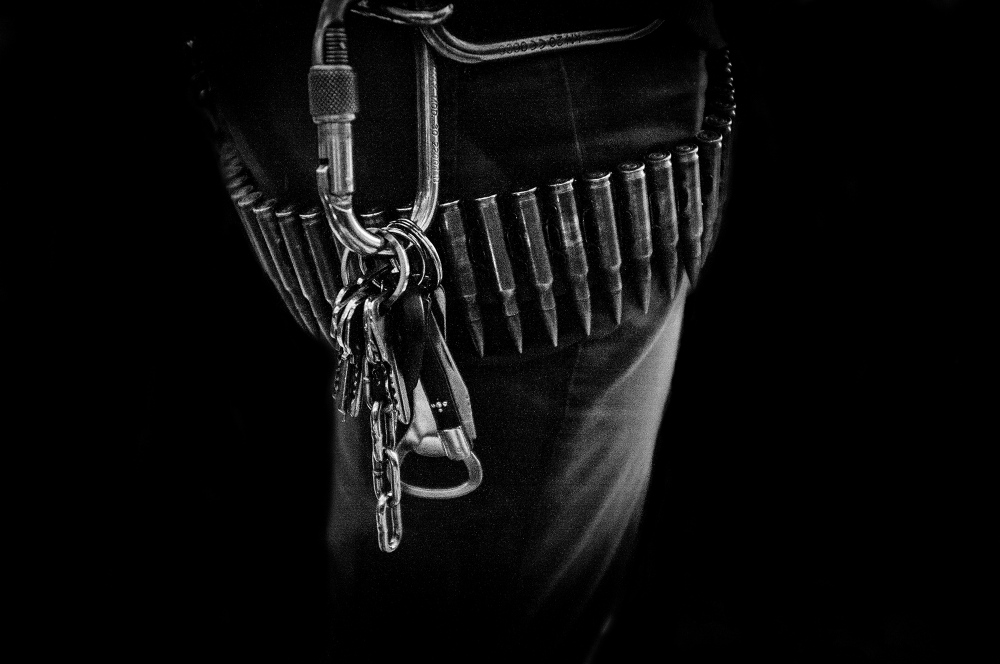 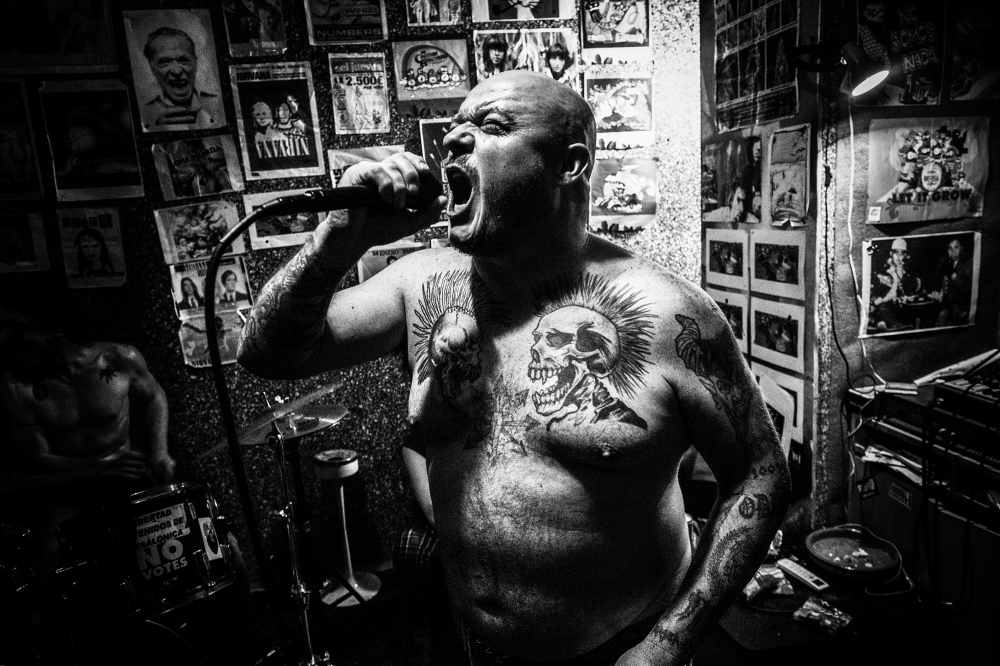 Practice session of the music band. Punk music is one of the most common ways of conveying messages about total disagreement with society, anti-fascists and anti-capitalists ideas with great violent content. 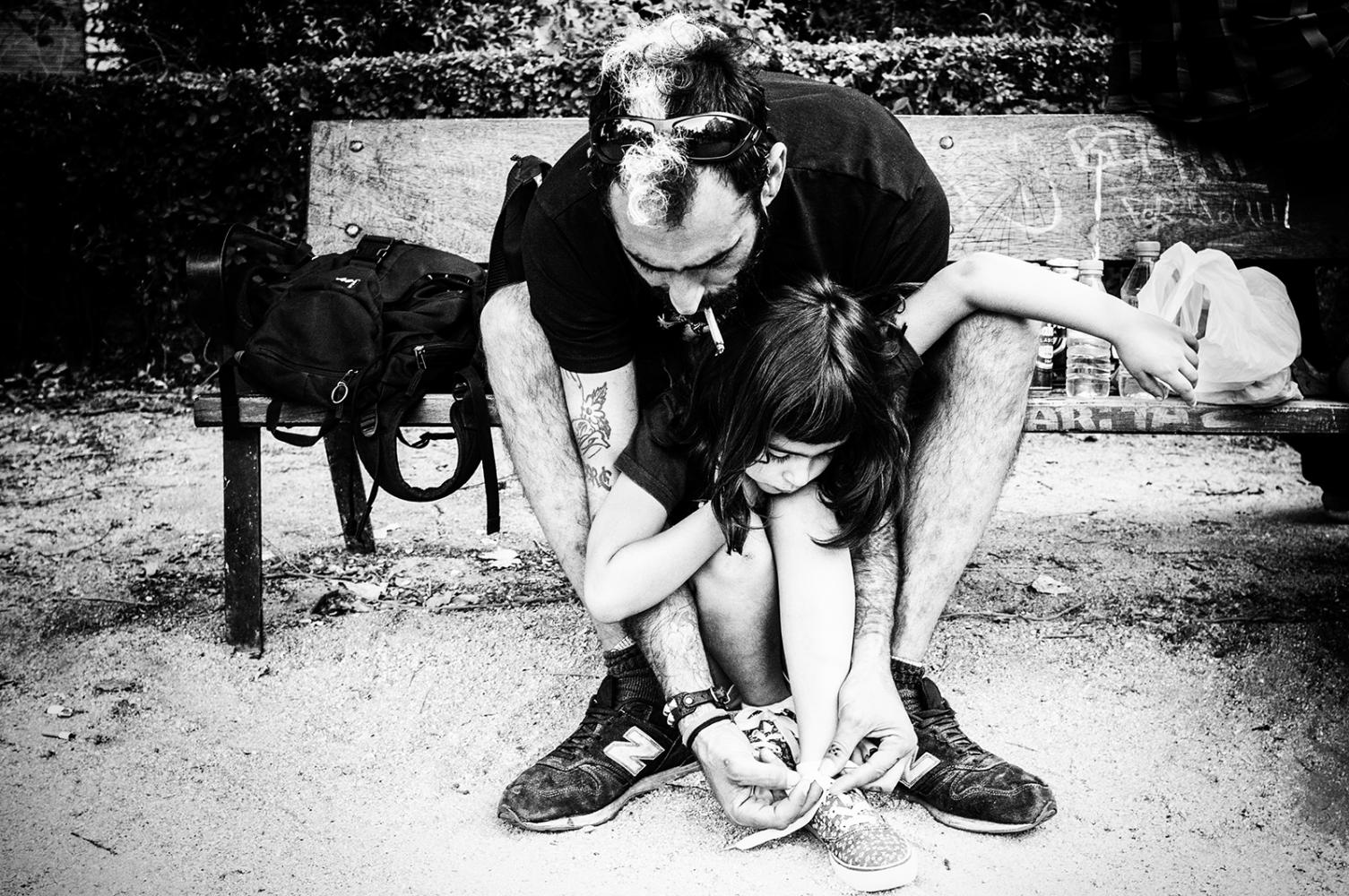 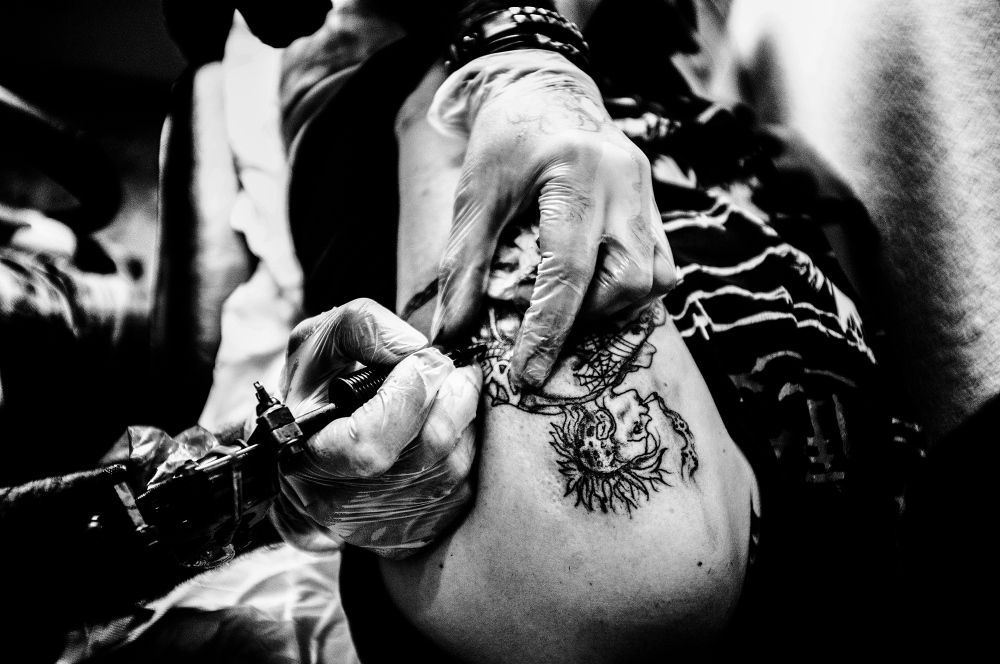 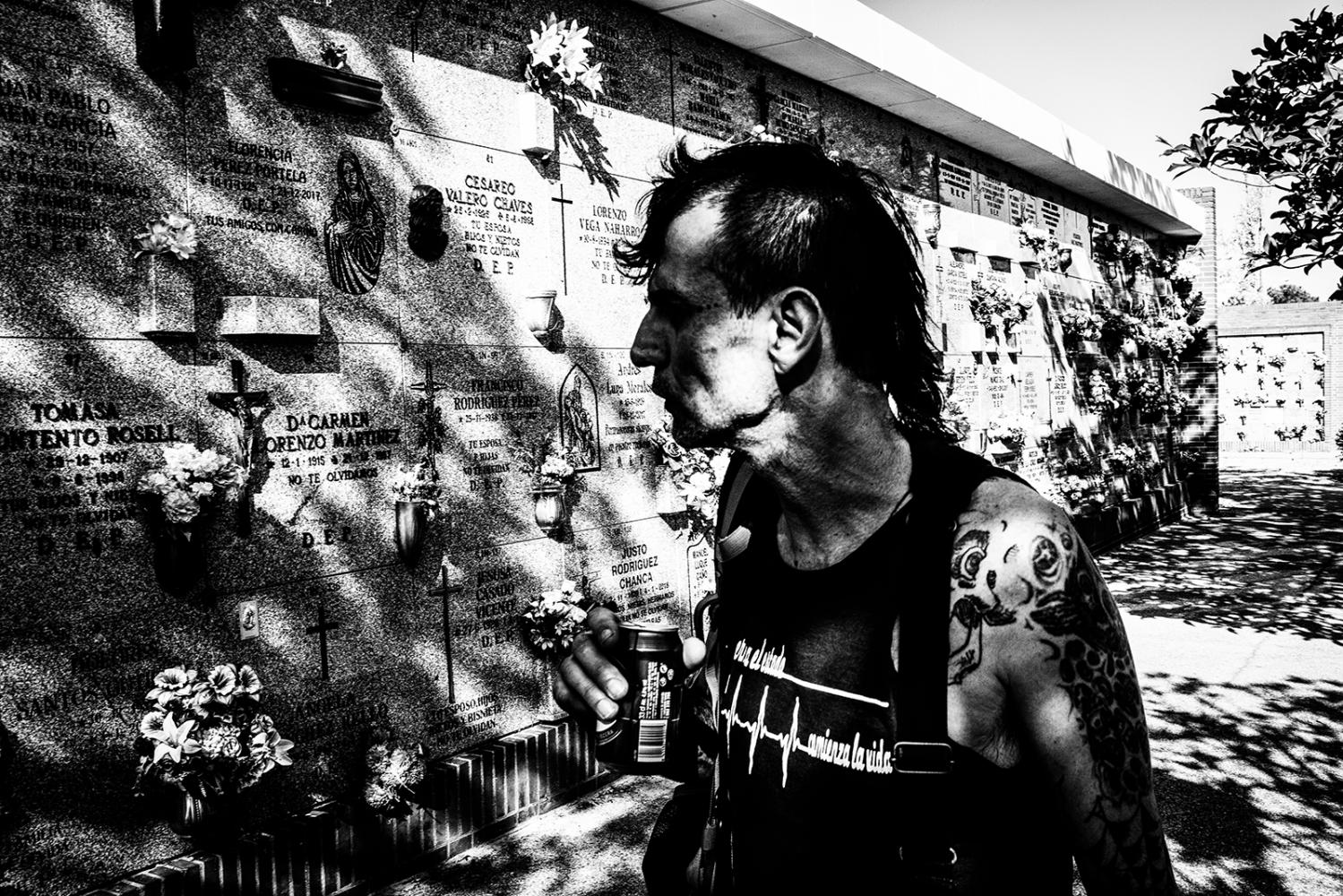 10 of 25 © 2021 David Arribas
Vini has been a musician all his life. After some problems with drugs, he lost his twin brother, also punk, due to an heroin overdose. During the 80's the heroine resulted in the death of a generation of punkies. The slogan "Live fast and die young" became very important in the young punk life. Currently Vini is a tattoo artist and guitarist in his punk band. 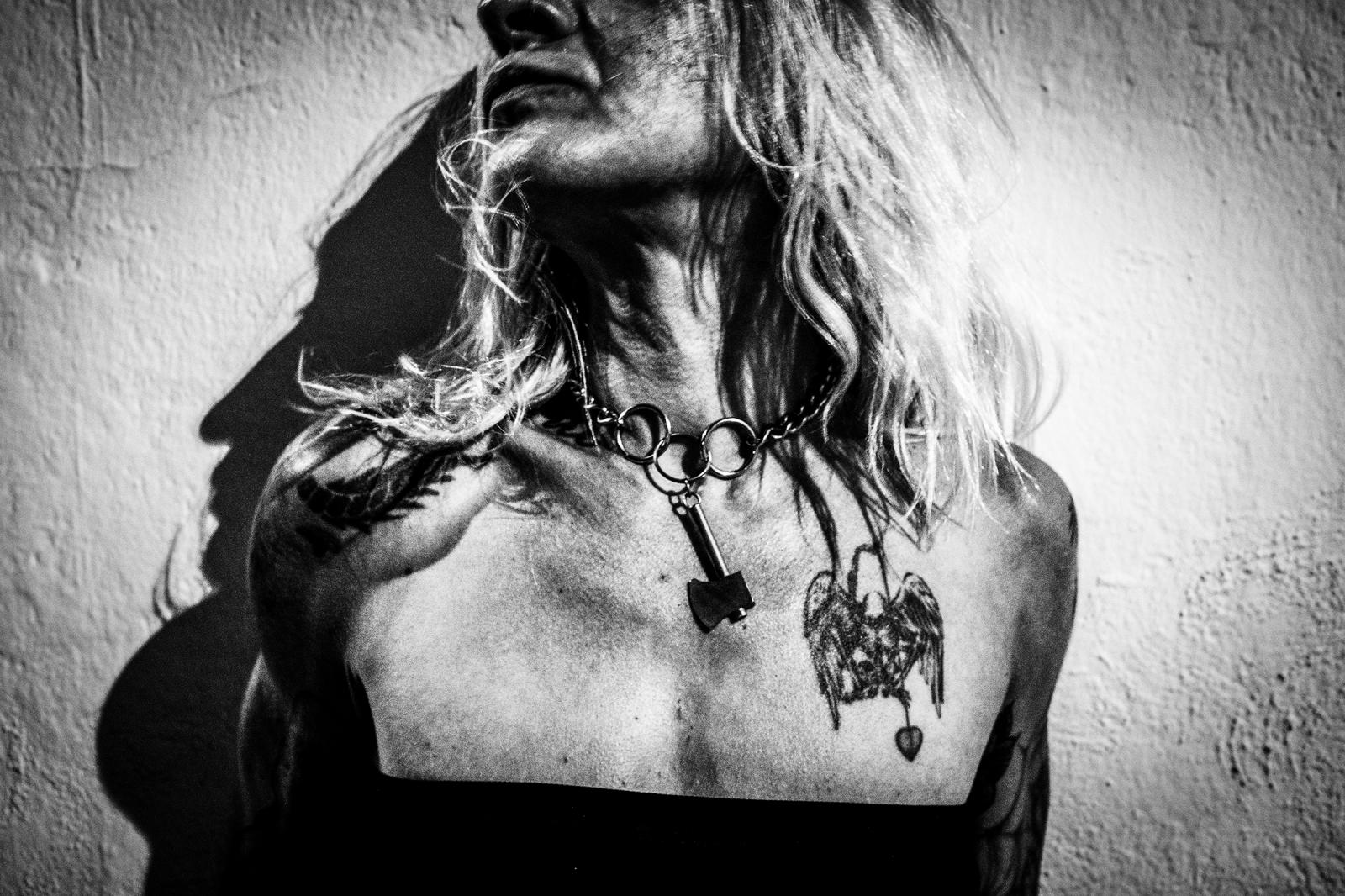 11 of 25 © 2021 David Arribas
Mery ( the ax girl ) was a singer for the group Grippers. She maintaining a deeply rooted punk philosophy, currently she stopped living in the city, leaving the stereotypes of consumption and aesthetics to change to an independent life in a rural area of self-management according to her ideas. 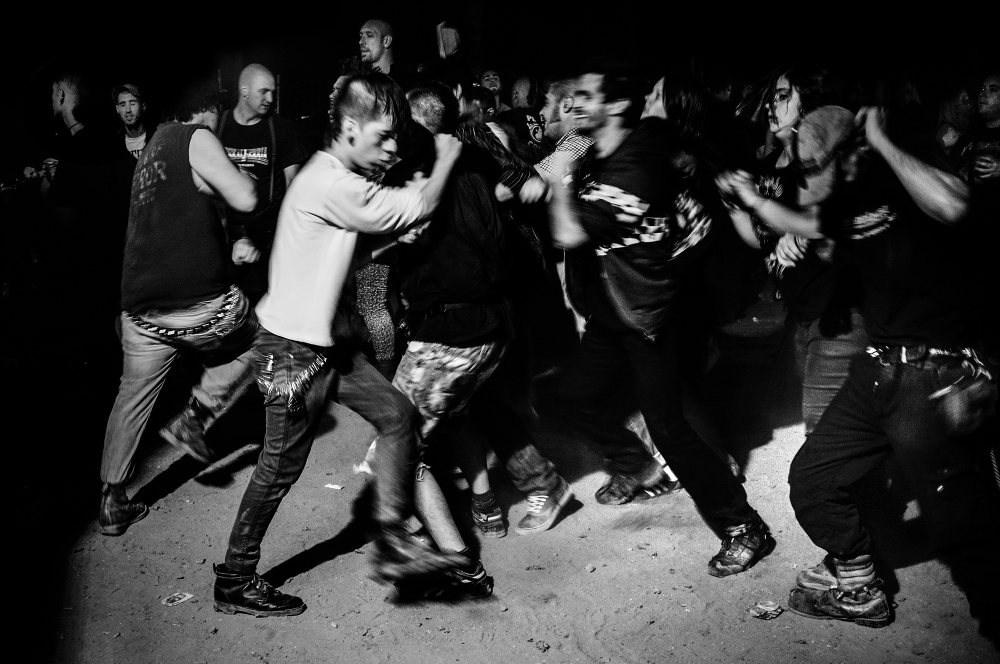 12 of 25 © 2021 David Arribas
The “Pogo” is a hard dance in which members are pushed and beaten during concerts of punk and hardcore music. Concerts held at festivals and self-managed social centres. The" Okupa" movement is closely linked to punk philosophy , although not all occupies are punks. 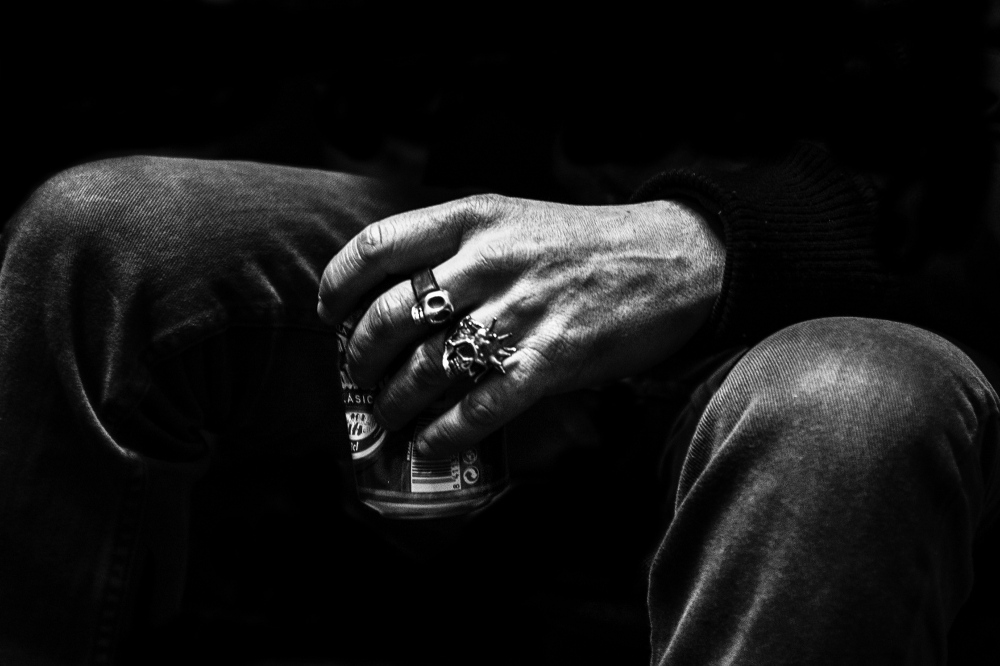 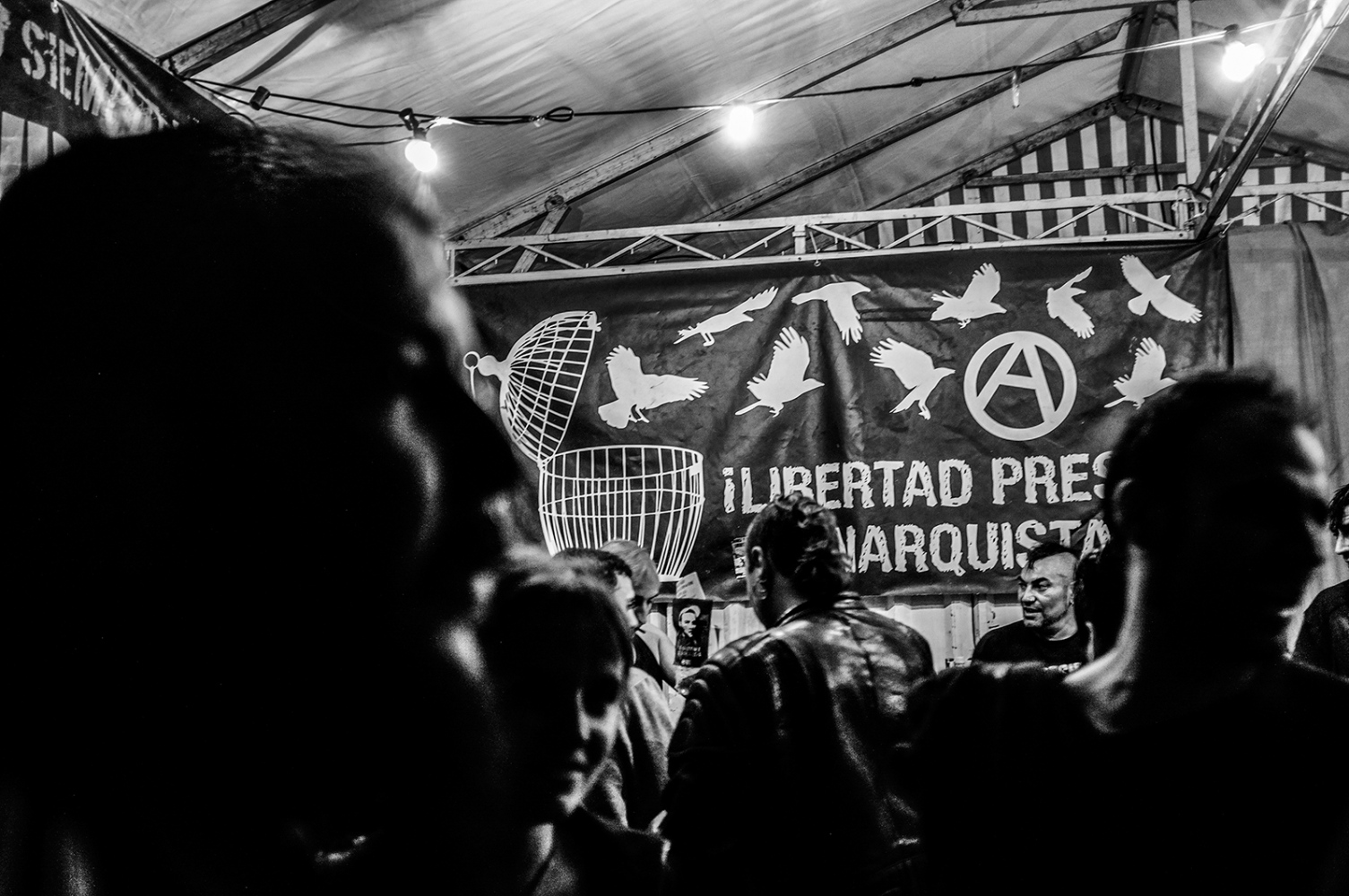 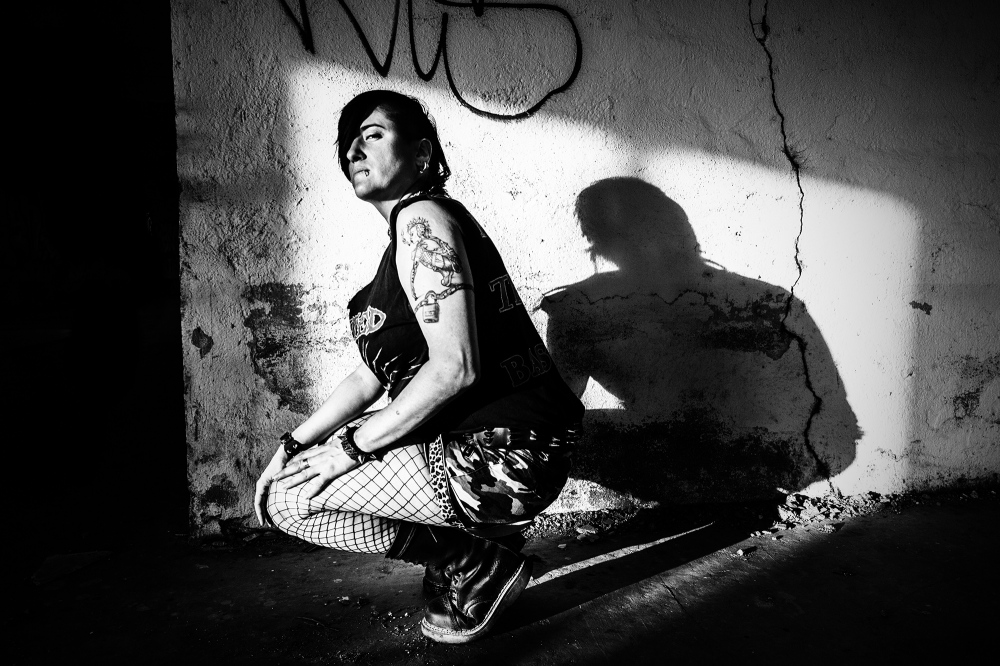 Women are very active members of the punk scene. "China" has been punk since she was very young. She is currently married with her punk boyfriend. 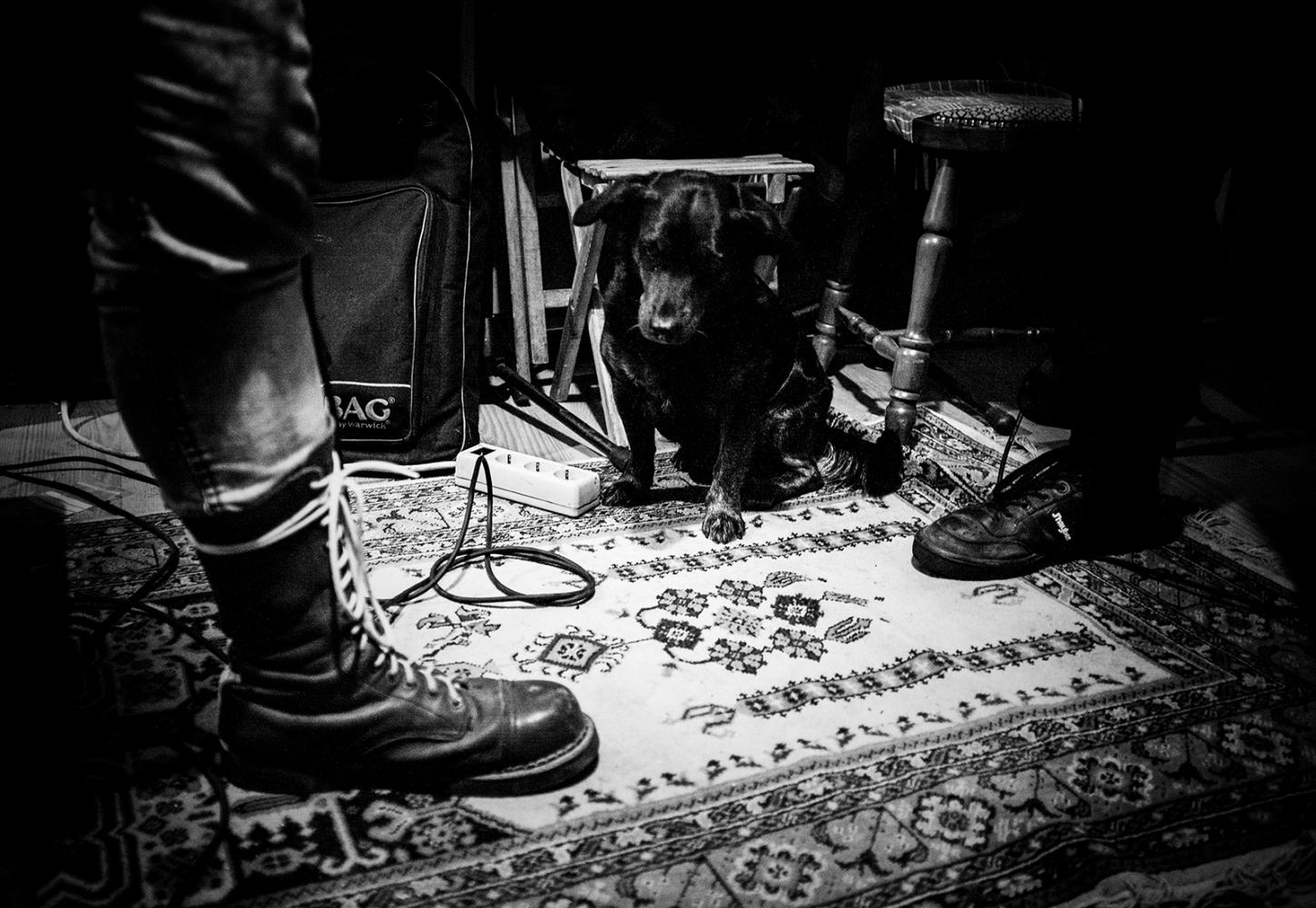 16 of 25 © 2021 David Arribas
Kaos, the dog of one of the members of the group Ansia Viva in the group's rehearsal place. 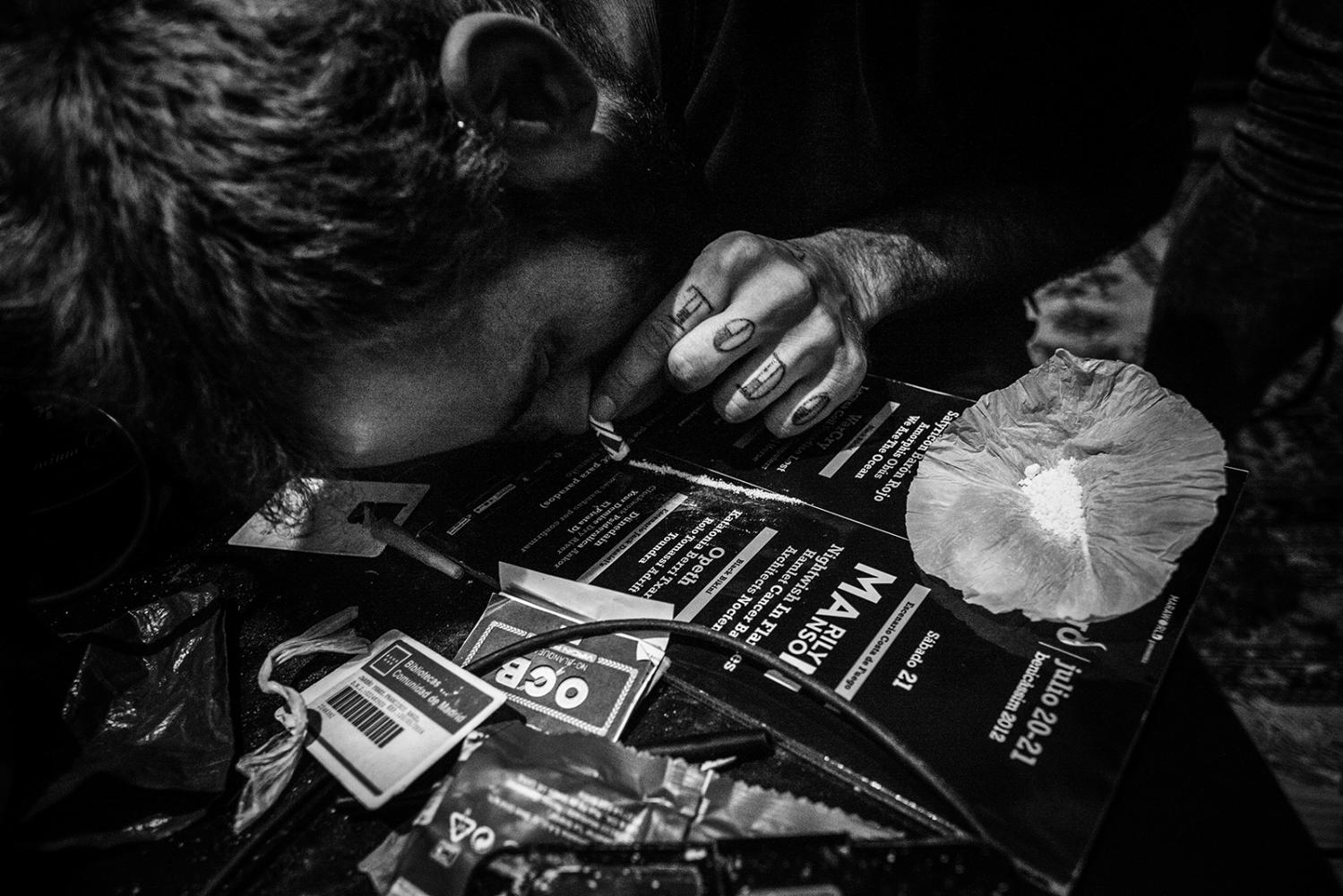 17 of 25 © 2021 David Arribas
Speed, among other substances, is one of the drugs used at events such as concerts, music rehearsals as in the pic. Consumed by nasal route, speed is composed of amphetamine sulfate, sometimes amphetamine is adulterated with other substances or medications. It was created by Dr. L. Edeleano in 1887 with medical purpose to induce alterations in the central nervous system and as a bronchodilator. Later this medication was released as a potent drug causing euphoria and great addiction. 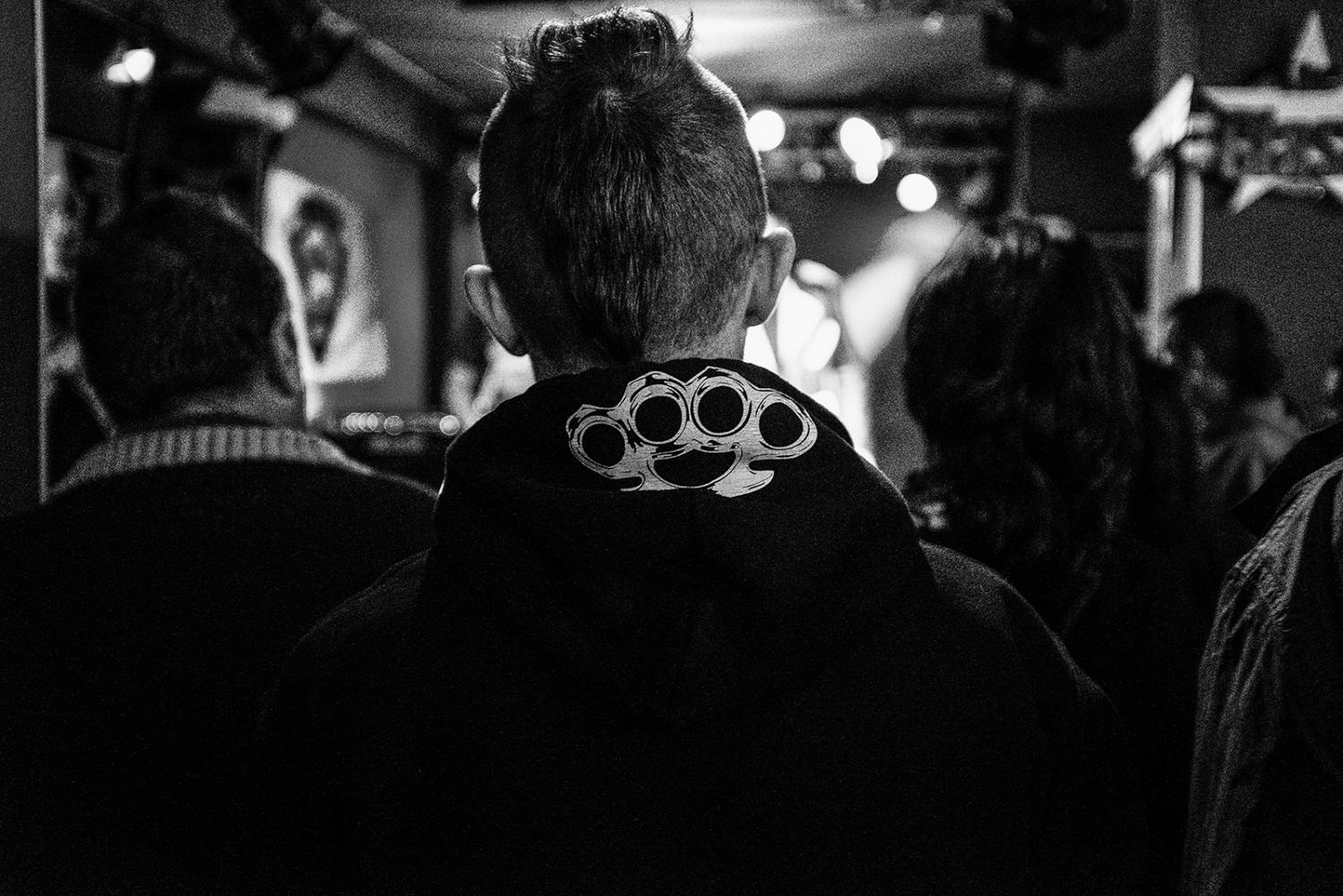 18 of 25 © 2021 David Arribas
Tribute concert to Fernan. He killed himself several years ago. 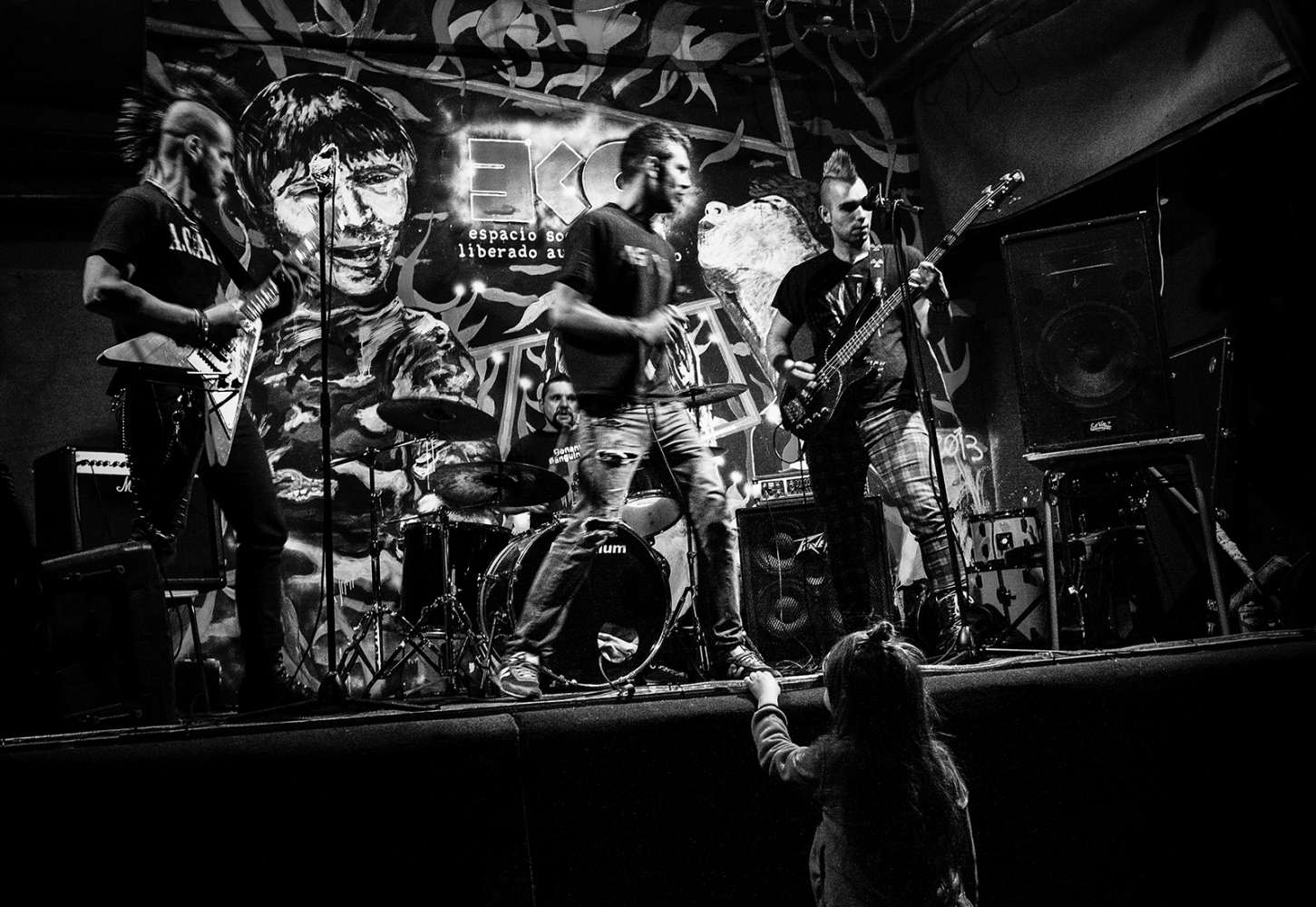 The daughter of one of the members of the group observes during the rehearsal at the EKO Occupied Social Centre.  The Occupy movement was an international socio-political movement that manifested its total opposition to the social and economic inequality closely linked to the punk movement. 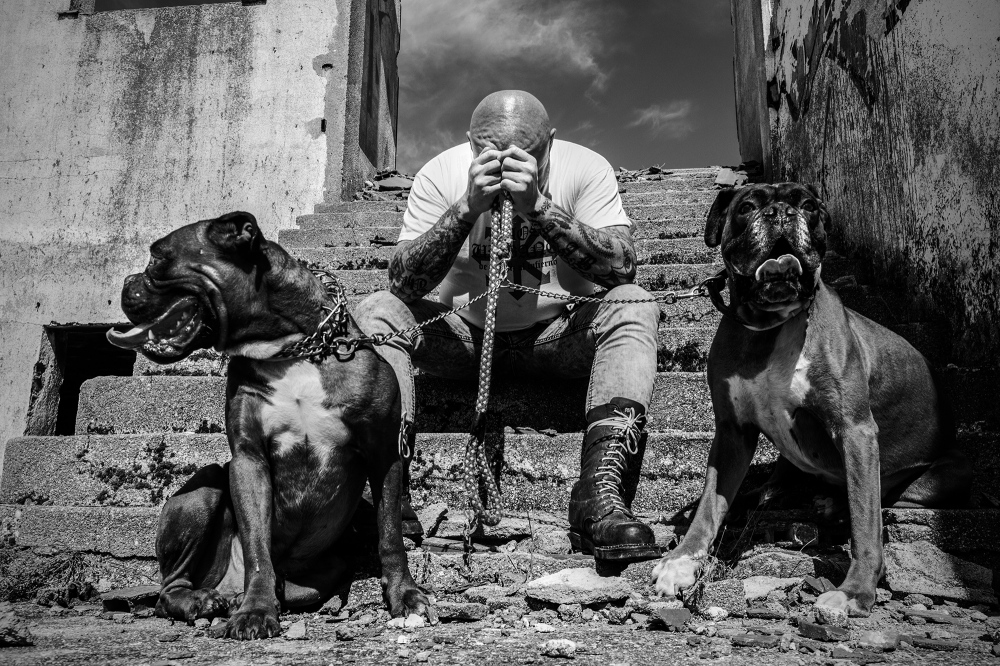 Rotten and Wattie ( dead in 2017 ) are two big boxer. Their names are in honor to Wattie Buchan singer of the group The Exploited and  Johnny Rotten (John Lydon), Sex Pistols´s singer. 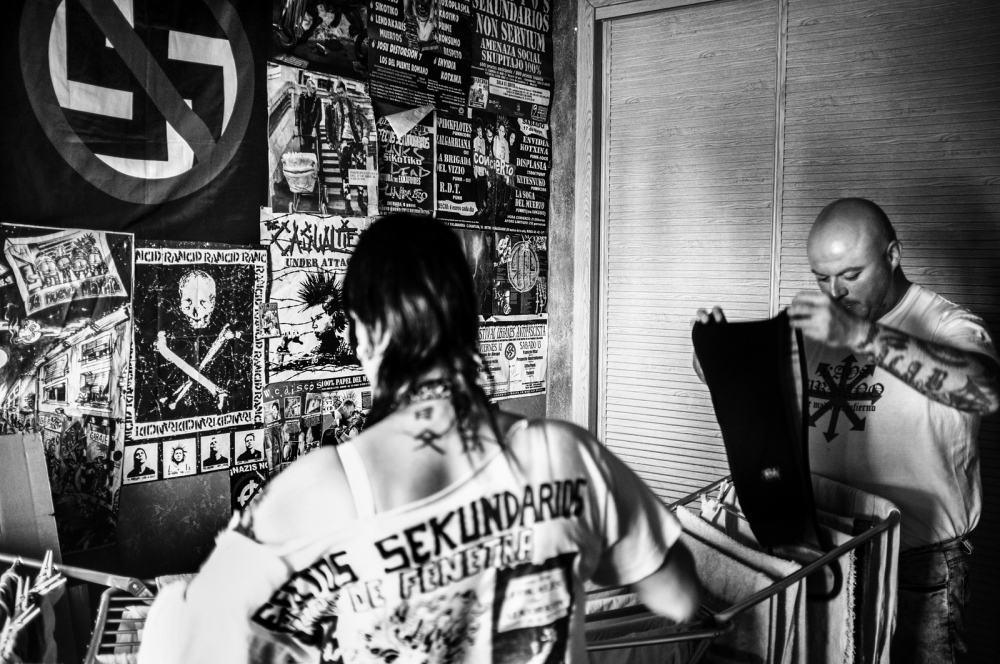 21 of 25 © 2021 David Arribas
Housework.
The antifascist movement have a great important inside the movement. 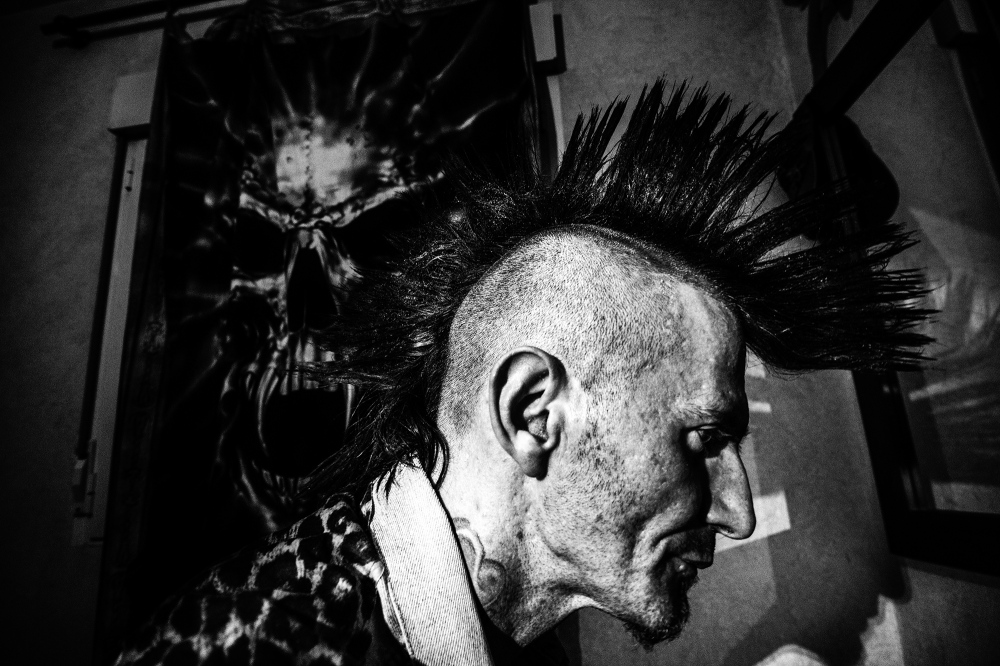 22 of 25 © 2021 David Arribas
The crest began to be popular in 1979. With origins in the Mohican Indians, the hair is raised with soap and other products. 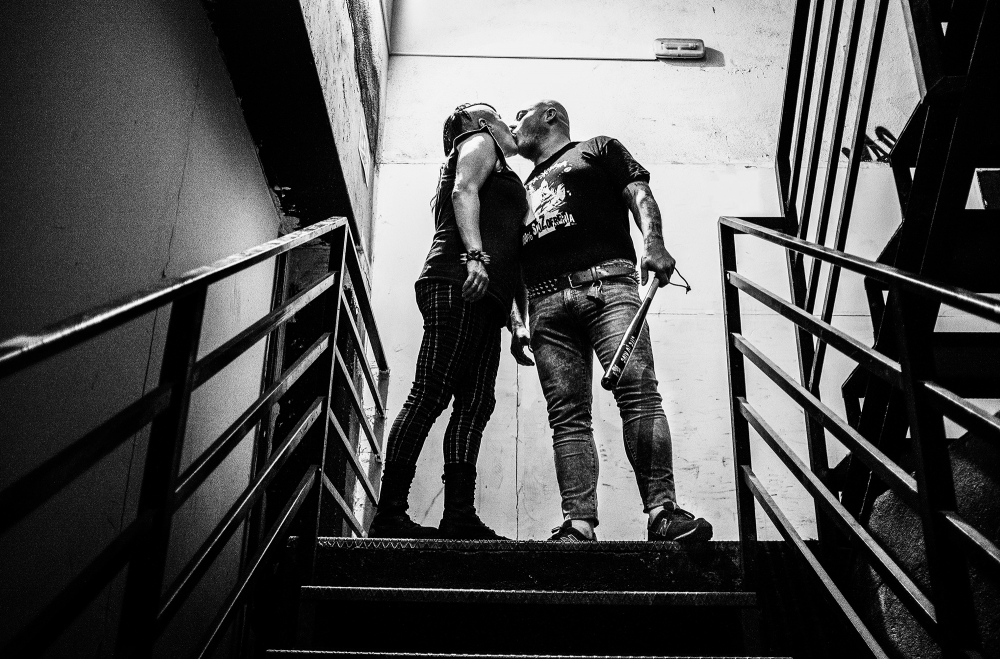 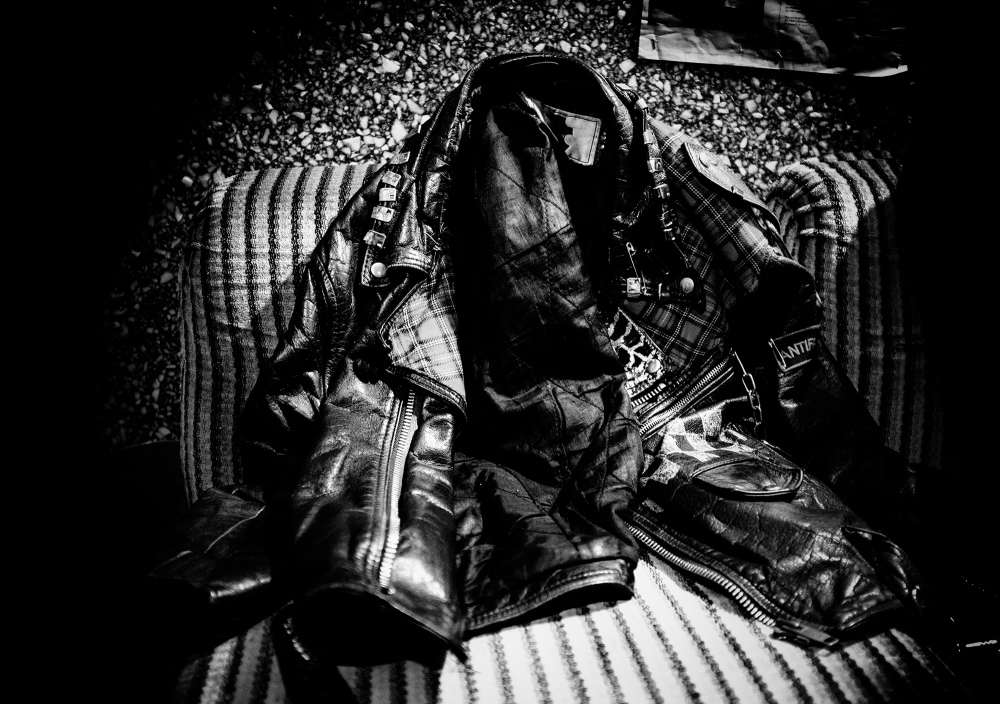 24 of 25 © 2021 David Arribas
“D.I.Y.”  Do it yourself. It is another slogan of anti-capitalist punk philosophy. It proposes to replace the purchase of articles of necessity by the self-management and own manufacture. Everything outside the established system. In this sense, the jacket, fundamental pledge of punk clothing, is customized showing the personality of its owner. 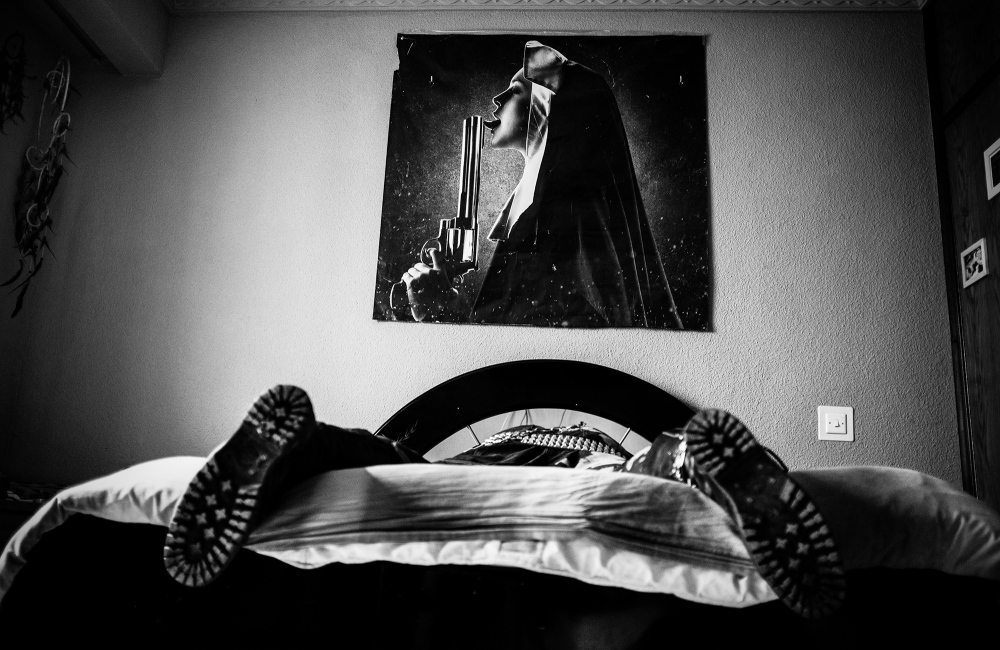 25 of 25 © 2021 David Arribas
Anarchy is a concept that comes from the anciente Greek ἀναρχία (anarchía), derived from the word ἄναρχος (ánarchos) and which mentions the absence of public power. Related to the movement that proposes the existence of a social organization that is not hierarchical comes into conflict with the control exercised by a state. For the punk attitude it is one of the bases that keeps it alive to maintain this disobedience.  "Punk´s not dead"

Yearning. The raw expression of revenge.

The first beginnings of the punk movement can be found on late 1960’s in Detroit and New York. In 1976 in England it began as a philosophy and a sociocultural movement with great intensity. Punk was born as a consequence of the socioeconomic crisis of the western countries that left the great majority of the population in difficult conditions of exclusion, unemployment and political and social instability.
In Spain this movement was born later, in 1977, after the Franco dictatorship as an escape of accumulated anger, and an anti-fascist and anti-capitalist character. Creating a subculture contrary to the established system where the written medium as the fanzine and songs with lyrics clearly against the system were means of diffusion of the movement.
When I look back and try to remember my adolescence I cannot do it without listening punk or rock music on the background because I grew up on that ambient so it’s a familiar topic to me. For this reason I decided to create a photographic project about the way of life of a punky group. I talked to a punk band about the "Ansia " project and my interest on giving a documentary evidence of the meaning of "being punky" with a view from inside the movement.
I went to their concerts, rehearses and their meetings. I created a confident atmosphere that allowed me turning into something similar to another member of the group. In addition, I was interested on finding adult punkies who had lived and would live forever on the punk's philosophy.
I wanted to show their day by day, their life (their couples, their sons and daughters, drugs, music..... show his essence) and, over all, their disagreement with the society, sometimes very close to the hate.
Photography and text             David  Arribas
Text, edition and Translation  Clara Muro

Scars. Surviving being a greyhound.

By David Arribas / Spain — Scars. Surviving being a greyhound. Spain is one of the few countries where greyhound hunting is a legal..
Sep 6, 2020