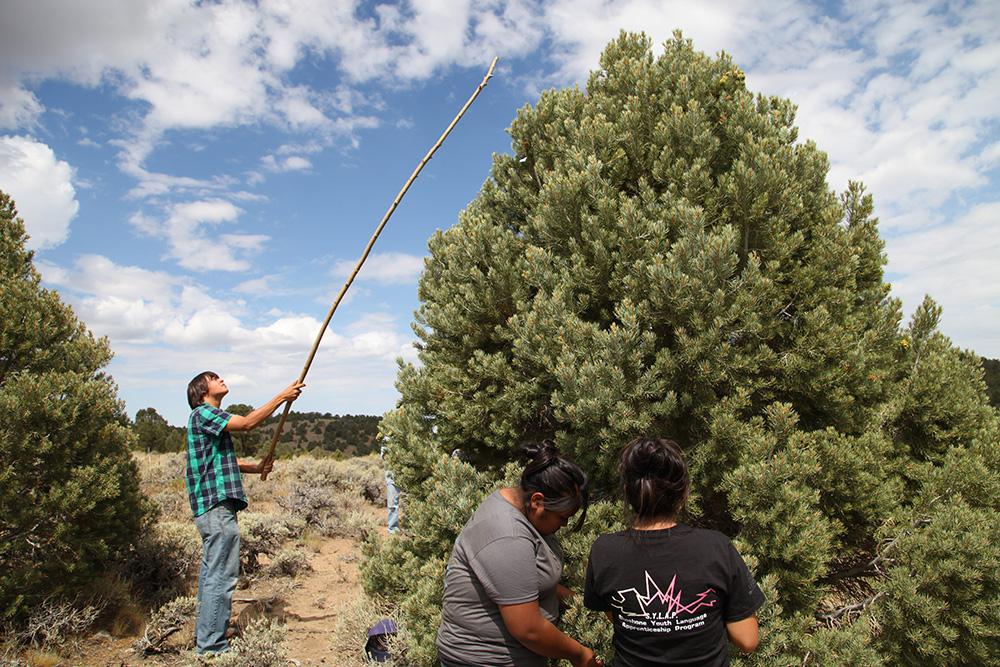 Pine nuts are an important traditional food source for Western Shoshone tribes in the high Nevada desert, as well as other tribes throughout the Great Basin and high desert regions in the West. During the fall, Shoshone families and groups head into the pinyon-pine covered hills to harvest the cones that have historically sustained their peoples for thousands of years. However, climate change has made the harvesting seasons extremely unpredictable and tribes have had to adapt. From 2014-2019, I visited the Yomba community in central Nevada to document the volatility of this practice that is so precious to this area.

Here, Shoshone students participate in a pine nut harvesting youth program activity. They gently tap the tree with a long stick as ceremony to wake up the branches and ask the tree to for its bounty. Tobacco, sage and water are often left as a thank you to the trees. 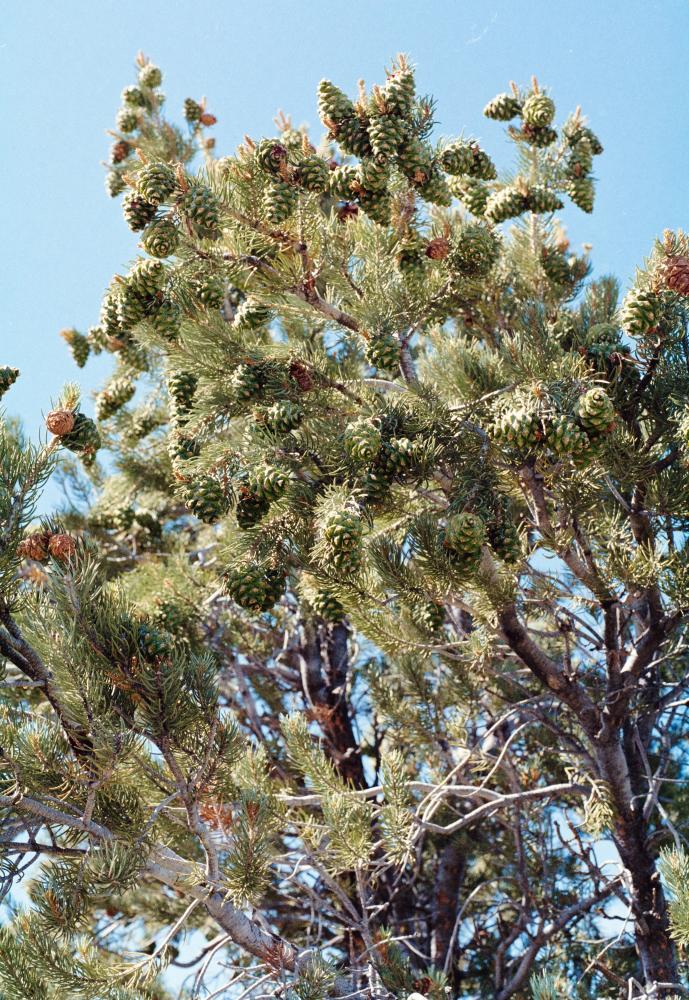 Pinyon pine trees are hardy plants, but they do best in sunny high desert conditions around 6,000-7,500 feet in elevation. They are sensitive to heat, and rising temperatures due to climate change have already caused mass die-offs in Arizona, New Mexico and Utah. Nevada has been spared heavy die-offs so far, but tribal members have had to resort to adapting their harvesting times to actually gather healthy cones.

The heat of hotter summers can melt the protective sap coating each pinyon pine cone, making it susceptible to bugs and disease. Many Shoshone families now start their harvest in the late summer when the cones are still very green. If they wait until the usual harvest time (September and October), they risk the nuts inside being damaged or spoiled. 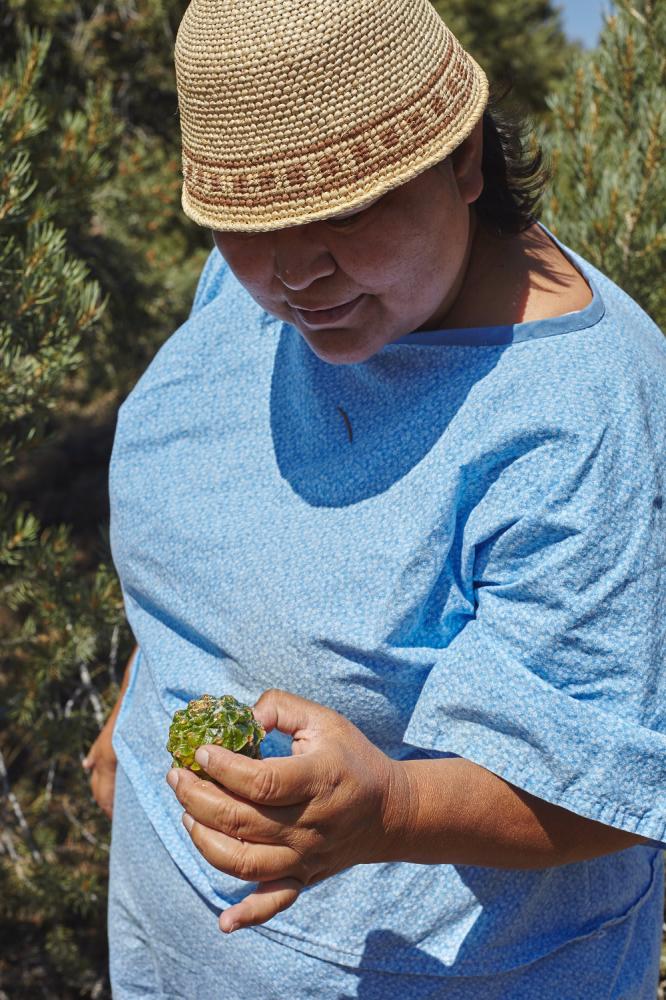 Yomba Shoshone tribal member Melanie Smokey examines a pinyon pine cone to check the amount of sap surrounding it. The sap is extremely sticky and can be eaten as a refreshing treat during the hot harvesting day.

Smokey grew up with traditional gathering practices, and often harvests with her mom, Darlene Dewey, and son, Jay Martin. "When we had that long period of intense heat, it seemed like the trees just melted," Martin said in 2019. "The pitch just melted away and the cones were exposed. They were susceptible to bugs and disease so the nuts didn't get to ripen." 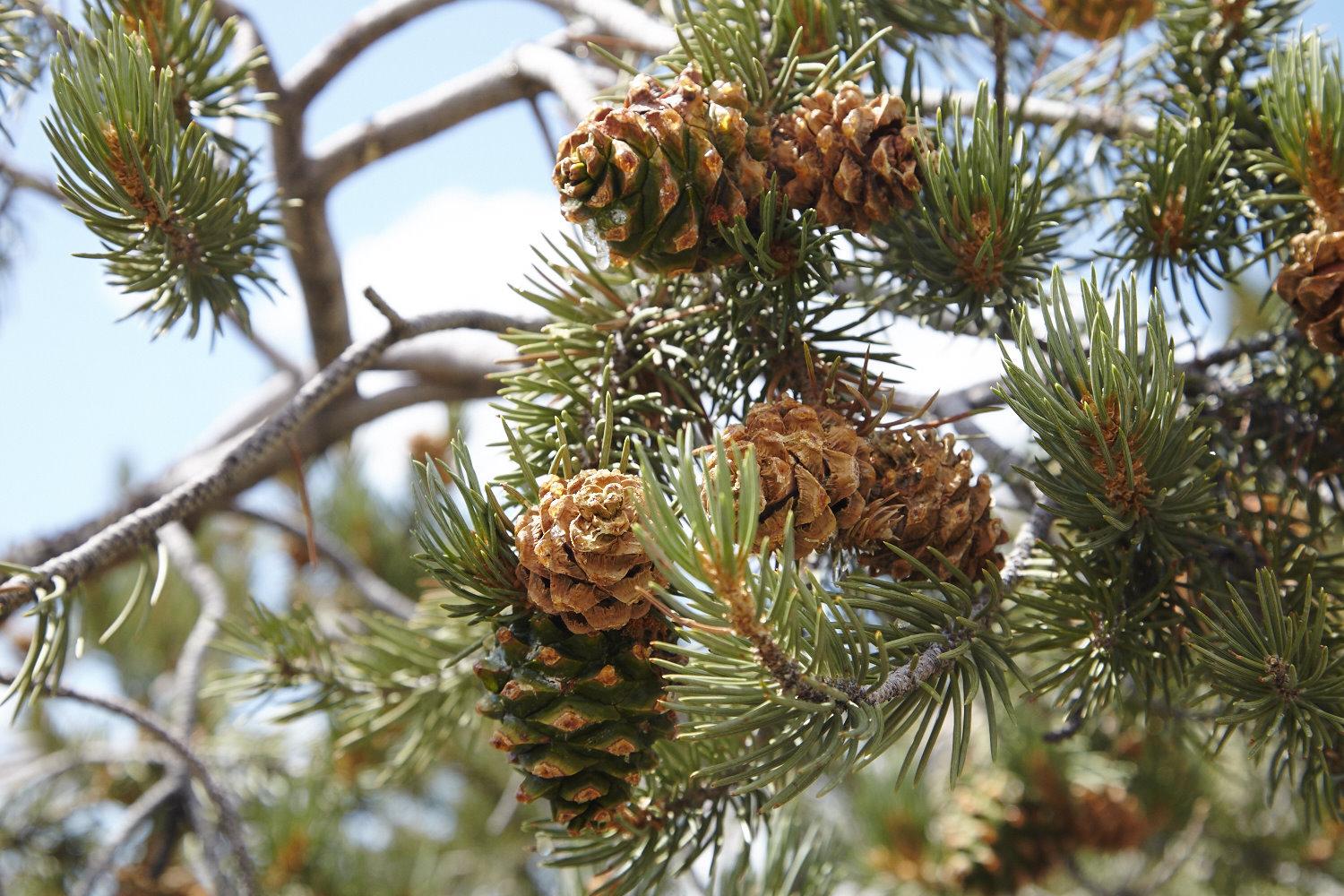 Smokey's mother, Darlene, has lived in Yomba her entire life and has picked pine nuts almost every season. She mentioned in 2016 that the cones were looking funny, meaning they were prematurely dry and discolored. Intense heat had browned the top of green cones, melting the sap and beginning to dry them out by June of that year. 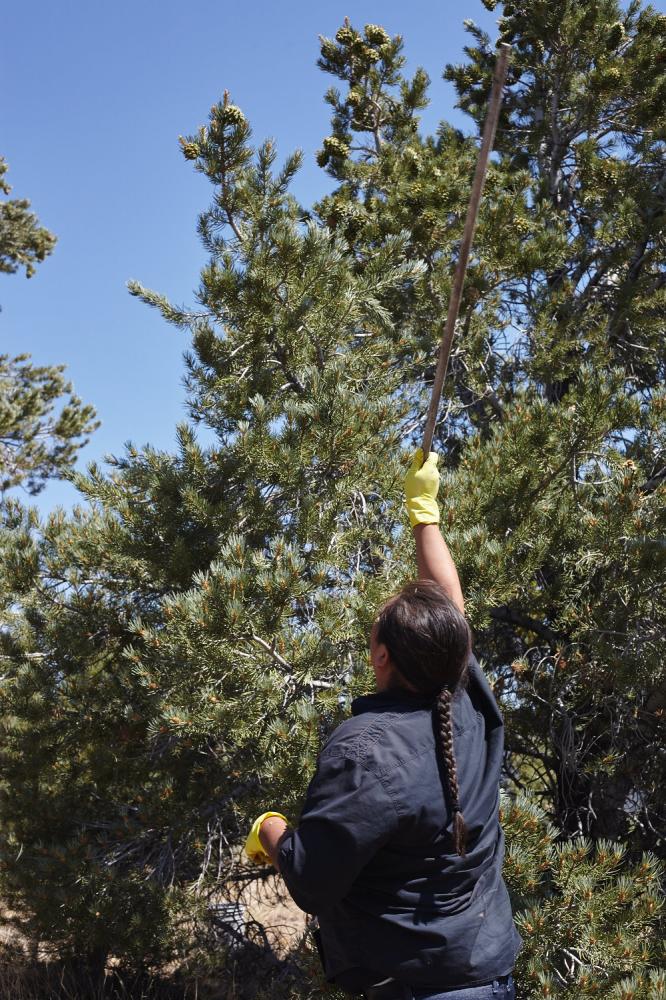 Pine nuts are not domestically cultivated like many other American crops--there are no pine nut farms, so to speak. Pinyon trees often grown on lands overseen by the Bureau of Land Management, which releases commercial harvesting permits to interested parties via a bidding process every year. Individuals and families don't need to apply for a permit if they are harvesting under 25 pounds, but with a shrinking supply of healthy cones, the competition has become strenuous between commercial pickers, Indigenous harvesters, and now illegal harvesters who try to fly under the BLM's radar.

Martin uses a long stick to whack cones from high branches, as now they tend to grow only on the top of the tree when they used to be on every branch. Commercial pickers, he laments, often exacerbate the sparse growth since they take every cone from the tree without leaving any for other animals, birds, or the next growing season.

Commercial outlets have noticed the decline in crop as well. The BLM used to issue dozens of permits per year for pine nut harvesting in Nevada. Between 2014 and 2019, it only issued 2-5 per year. 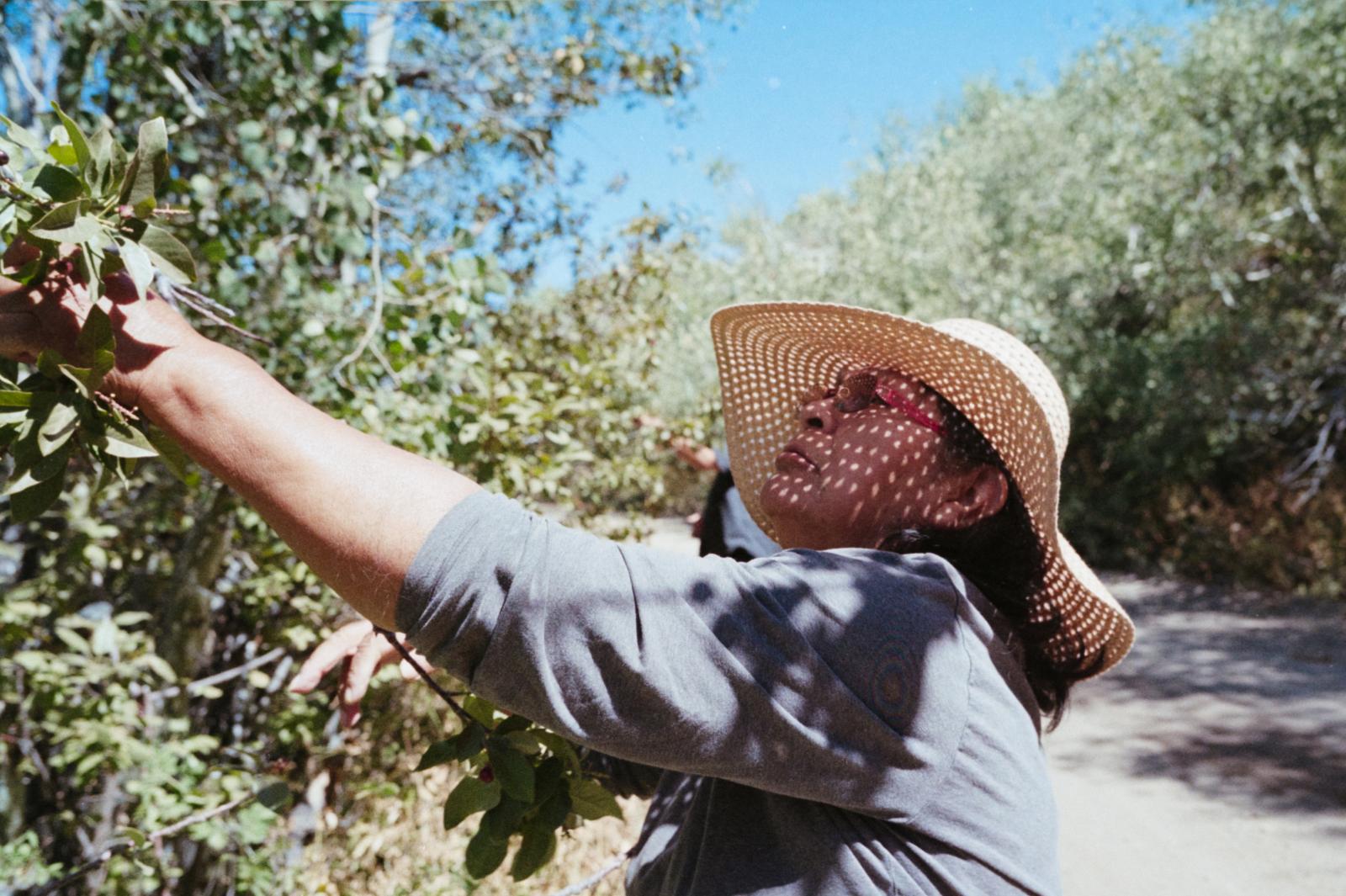 At 78 years old, Dewey remembers her family would easily bag over 100 pounds of cones in a harvest when she was a kid, and that cones were plentiful no matter where you chose to pick. "The trees would just be loaded," she said in 2019. "Now you see not all the trees have pine nuts. Maybe every other tree has them."

Dewey speculates that the reason for the bountiful harvests of her childhood were because of the snow Yomba used to receive. A few feet of snow during the winter months was a normal occurrence, but now the area sees a few inches accumulate in the valleys, with more in the mountains. 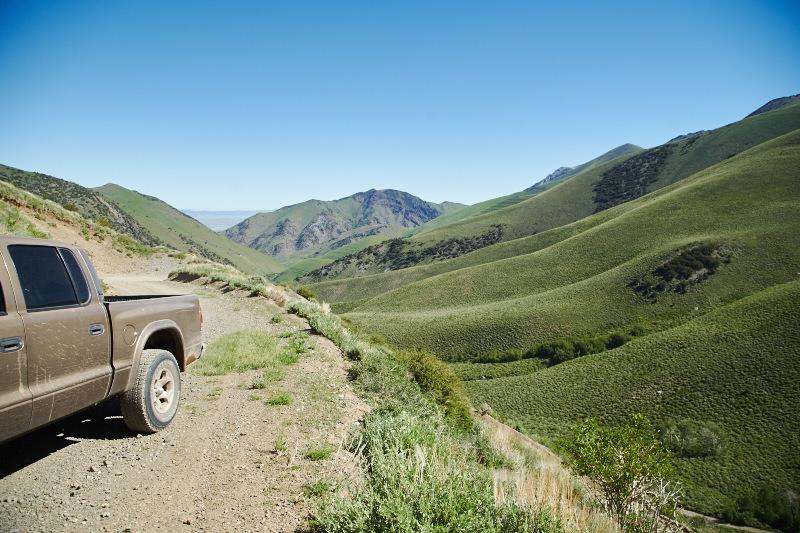 Droughts last longer now, but wet seasons do still occur, just in a seesaw pattern that's hard to predict. In 2017, an unusually wet winter and spring runoff season let the central Nevada landscape to be lush with green sagebrush and vegetation well into the summer months.

Unusually wet seasons followed by even drier seasons are hard on the landscape and ecosystem as a whole. Wild fires have become more common over the decades and feed on dry brush and grasses that sprout up after a wet spring. The vegetation that remained from 2017 fueled the Martin fire in 2018, which burned more than 439,000 acres and is Nevada's largest wildfire on record. 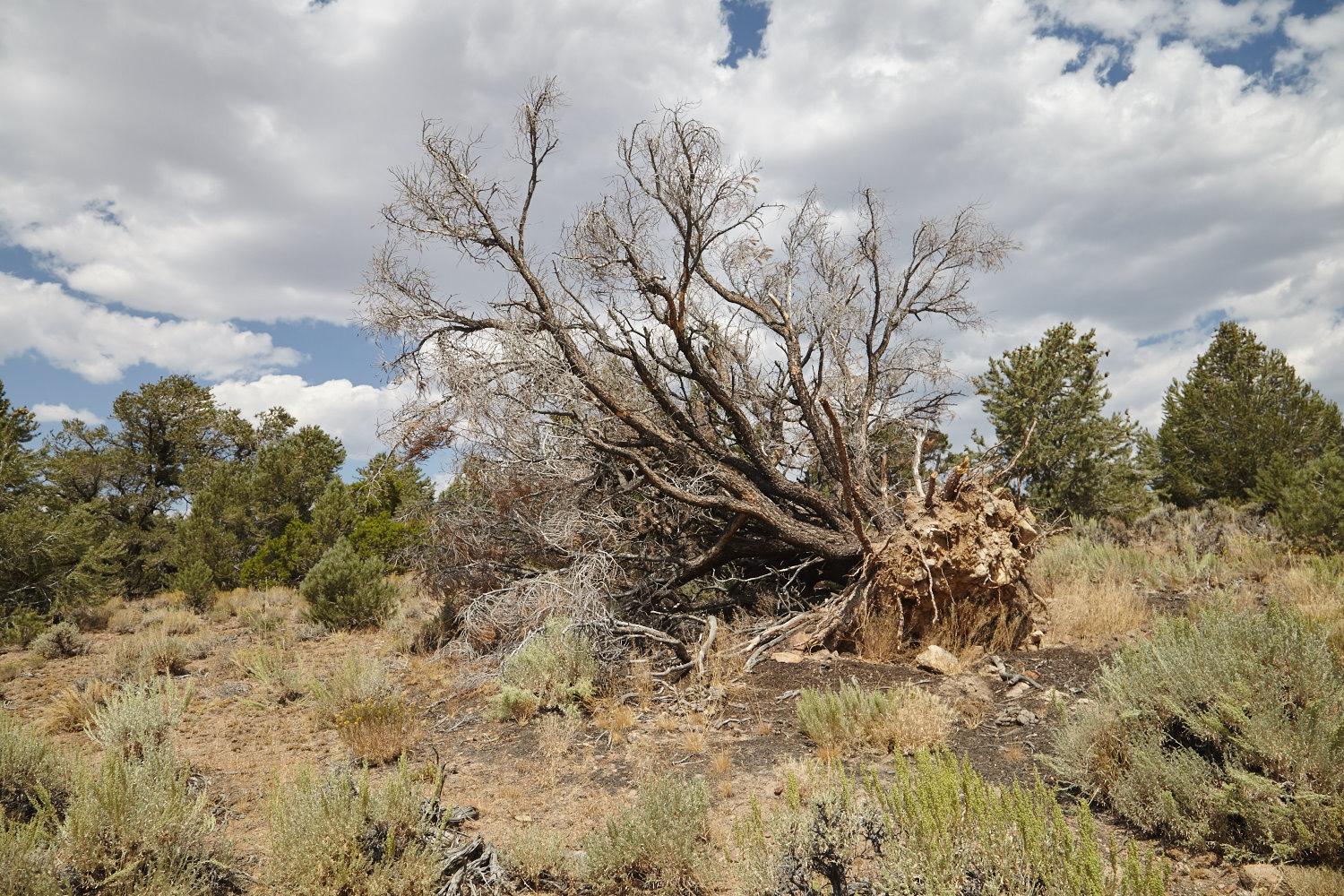 Whether from drought, disease, heat, or fire, damage to a pinyon pine colony can be devastating to the ecosystem and the Indigenous practices surrounding it. The trees are slow to mature, and groves can take 50-100 years to re-establish themselves. The pine nuts themselves take 2 years to mature for harvest. 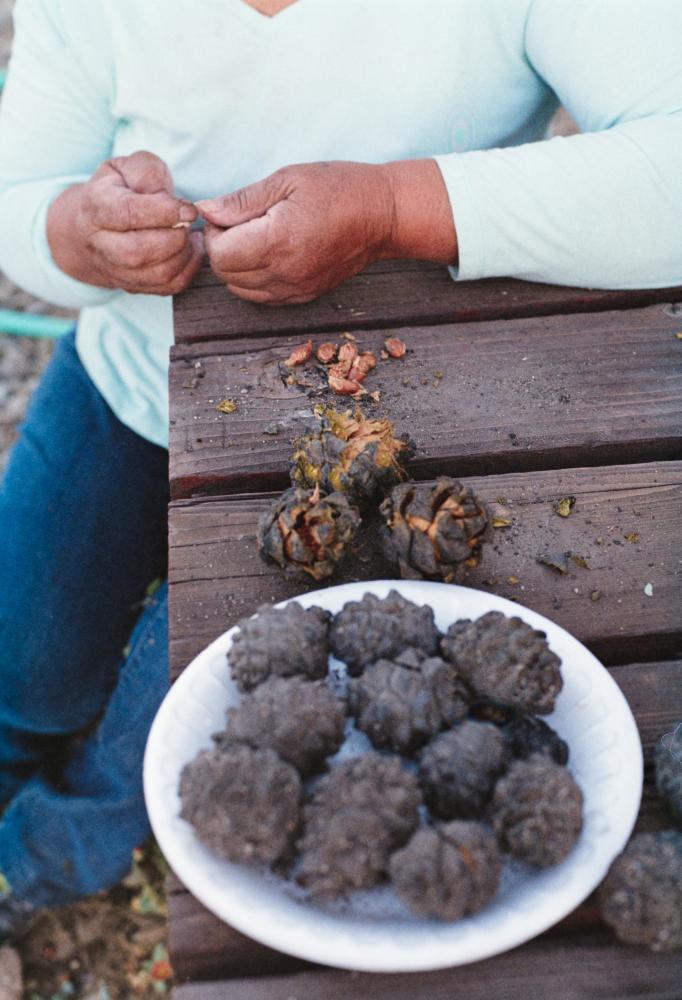 Pinyon pine cones are traditionally roasted in an underground pit for hours, until they open and toast the nuts. Each cone is then painstakingly peeled apart to reveal the delicious goods inside. Dewey roasts them in a pit behind her house, covering them in hot coals and embers until they're ready. Since the cones are being picked earlier while they are still green and covered in sap, they need to be roasted for even longer to ensure the nuts are actually roasted and not soggy.

Separating the nuts from the cones is sooty business, but families often undertake the task together. Western Shoshone and Paiute tribes have special gatherings and ceremonies during pine nut season and stands selling the roasted nuts are a specialty at these events. 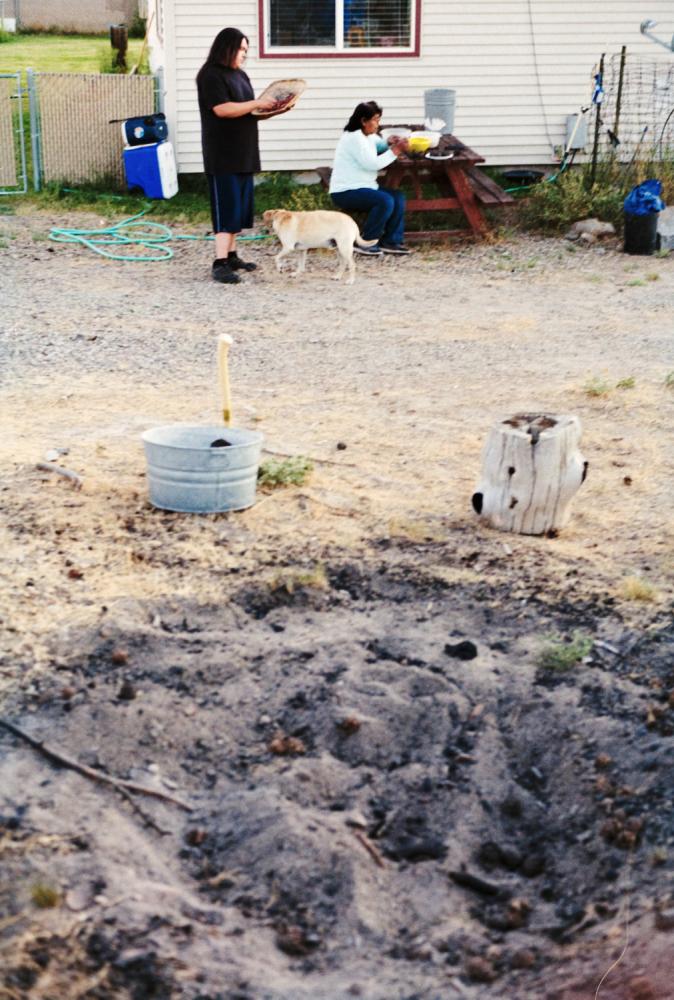 While pine nuts are no longer a necessary food to sustain tribal groups through the winter, Indigenous communities still see the harvesting practice as crucial to their identity. Many say the biggest threat to this traditional practice is the unpredictable weather patterns. Every year, groups, families, and individuals head into the hills to survey the pinyon trees' bounty, and they will keep going and adapting as long as they can.