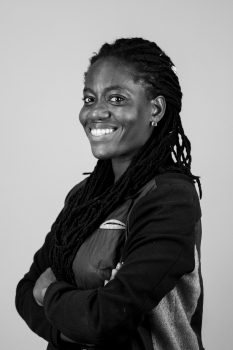 Photographer @ freelance based in Lagos

Ebunoluwa Akinbo is a Nigerian documentary photographer and an aspiring filmmaker with an interest in exploring societal and cultural issues as well as questions of identity. Ebunoluwa believes that ideas and imagination come to... read on
ebunakinbo.com
About

Coverage Regions: Africa Europe USA & Canada
Languages Spoken: English
Years of experience: Less than 3
Ebunoluwa Akinbo is a Nigerian documentary photographer and an aspiring filmmaker with an interest in exploring societal and cultural issues as well as questions of identity. Ebunoluwa believes that ideas and imagination come to fruition through photography. She embarked on a photography career after attaining a sociology degree. The decision was somewhat paradoxical as it was one of the most difficult and at the same time easiest decisions she has ever made.  In retrospect,  she is glad she took that leap because of the joy and rewards of doing what she truly loves. Being able to engage with the audience in a different medium which they may not be familiar with but succeeding in elucidating societal inadequacies and anomalies through this medium.

Ebunoluwa has since carved out a reputation for herself since her introduction to photography in 2017. She was the winner of Fashola Photography Competition in 2018 and in the same year participated in several renowned workshops including Canon Basic DSLR and GTBank Days of Dorcas female photographers’ workshops. Also in 2018 she was commissioned by the New York Times to document the #Thisis18 project in Lagos. Her work ‘The passing of time’ also exhibited at the Lagos Photo Festival of the same year. In 2019 she was nominated for the annual Canon Storytelling Master Class (Nigeria). Later in that year (in June) she was part of a group of young artists to exhibit in a team project titled “Live-in Desire” with the Goethe and Nlele institutes in Lagos. She received a scholarship in August 2019 to attend the annual Foundry Photojournalism Workshop in Kigali, Rwanda. She is an alumnus of the Foundry Photojournalism Workshop, a mentee at the Nlele Institute and a member of the African Photojournalism Database. She exhibited alongside other photographers at the 25th Bamako Encounters - OFF exhibition, The Nlele Institute, 2019.