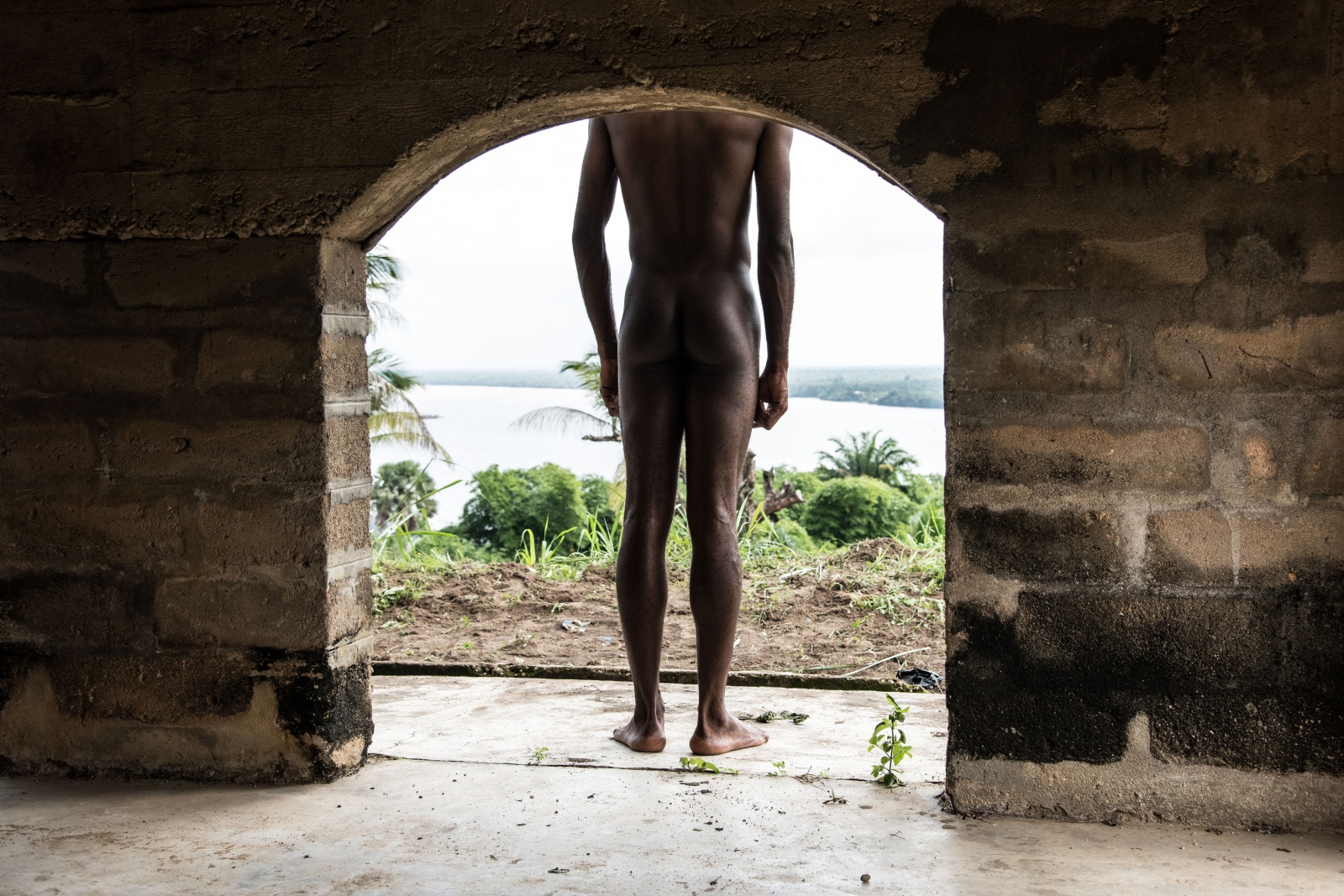 1 of 28 © 2022 Emeka Okereke
Ruptured Rupture
Hope Waddell Training Institution (Founded 1895), Calabar 2016.
A naked figure faces Calabar River, site of numerous Trans-Atlantic slave transactions, but also a major harbour from which Biafran troops staged offensives against their Nigerian counterparts during the war.  Hope Waddell Training Institution is one of the foremost colonial schools founded by then Scottish missionaries. Many of the notable founding founders of Nigeria and key players in the subsequent civil war attended this school. 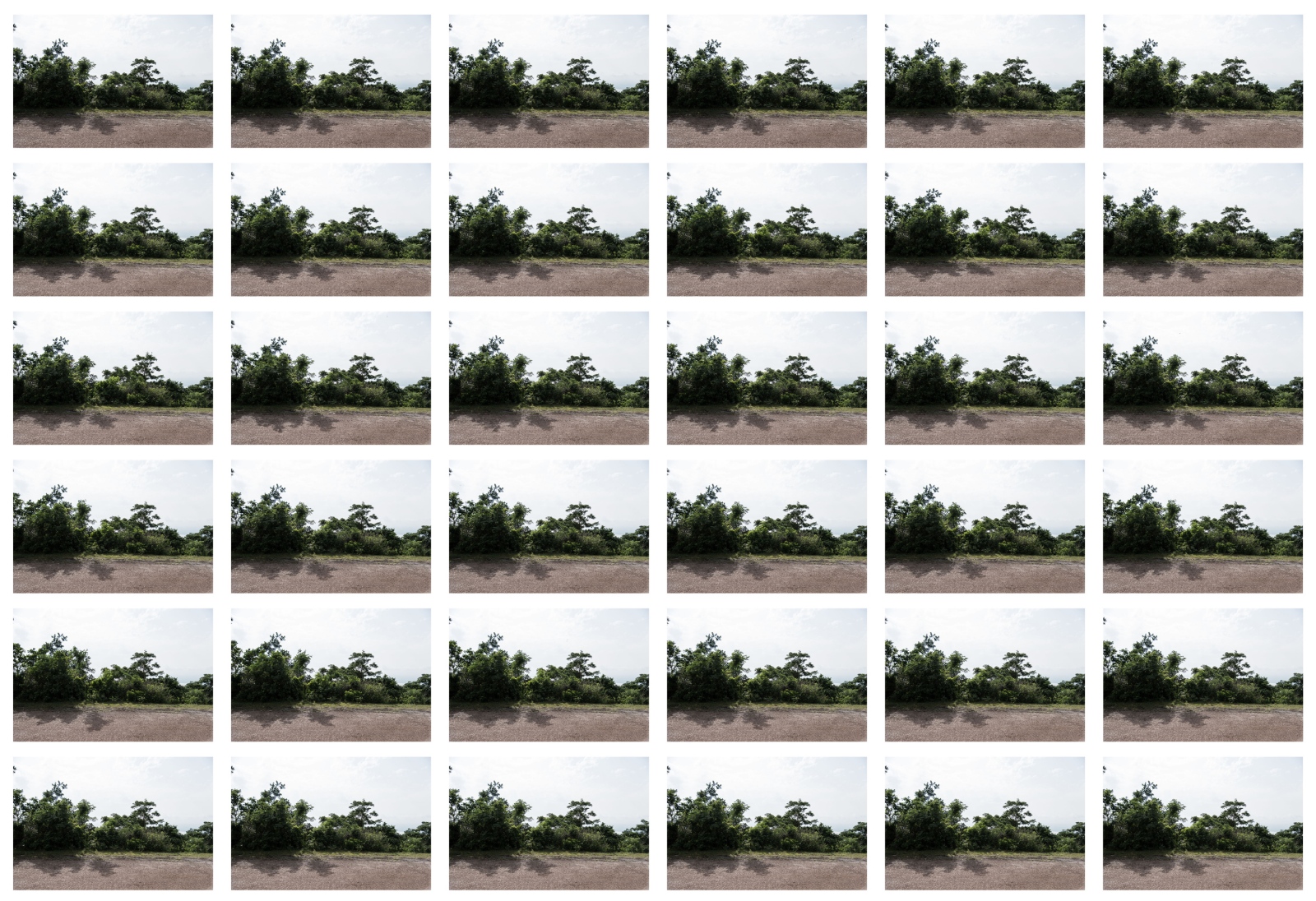 2 of 28 © 2022 Emeka Okereke
Flora Shaw’s View
Mount Patti, Lokoja 2016.
Flora Shaw, a journalist and wife of then British Colonial Governor General Frederick Lugard in 1897 coined the name Nigeria from a combination of the words “Niger Area”. These composite images were made standing at Frederick Lugard’s Rest House in Mount Patti (now a monument and a tourist attraction) overlooking the confluence of Rivers Niger and Benue – two rivers that are visible symbols of Nigeria’s amalgamation in 1914, and by that her regional/ethnic divides. It is assumed that the view from this rest house must have inspired Flora Shaw in naming Nigeria. The composite is of 36 unique images made chronologically referencing the 36 states of which Nigeria is currently divided. 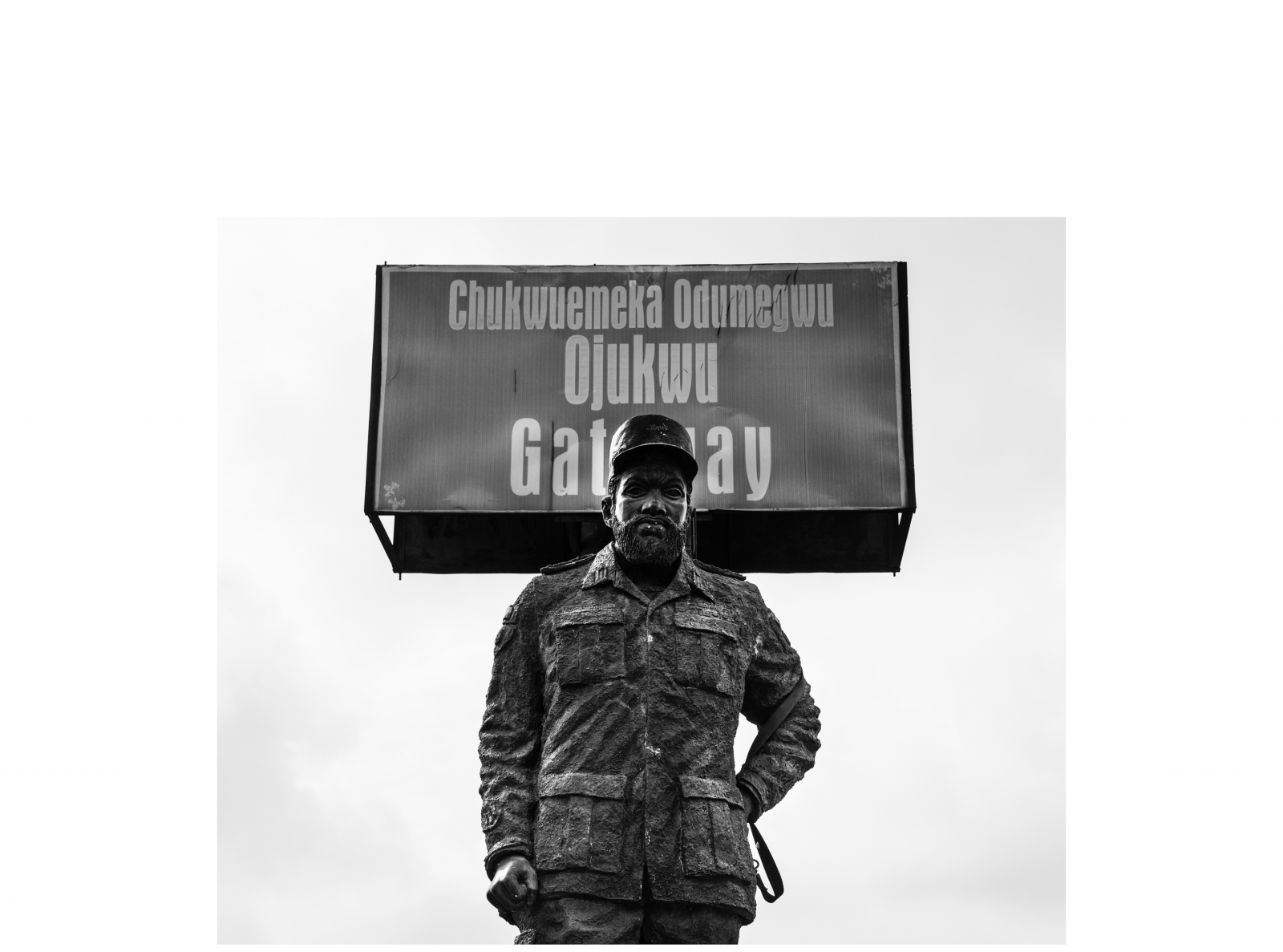 3 of 28 © 2022 Emeka Okereke
The Gateway
The Niger Bridge, Onitsha 2016.
One of the few monuments dedicated to the Nigeria-Biafra war: Statue of the Leader of The Republic of Biafra, Chukwuemeka Odumegwu Ojukwu at the entrance into Igbo-land, former Republic of Biafra. 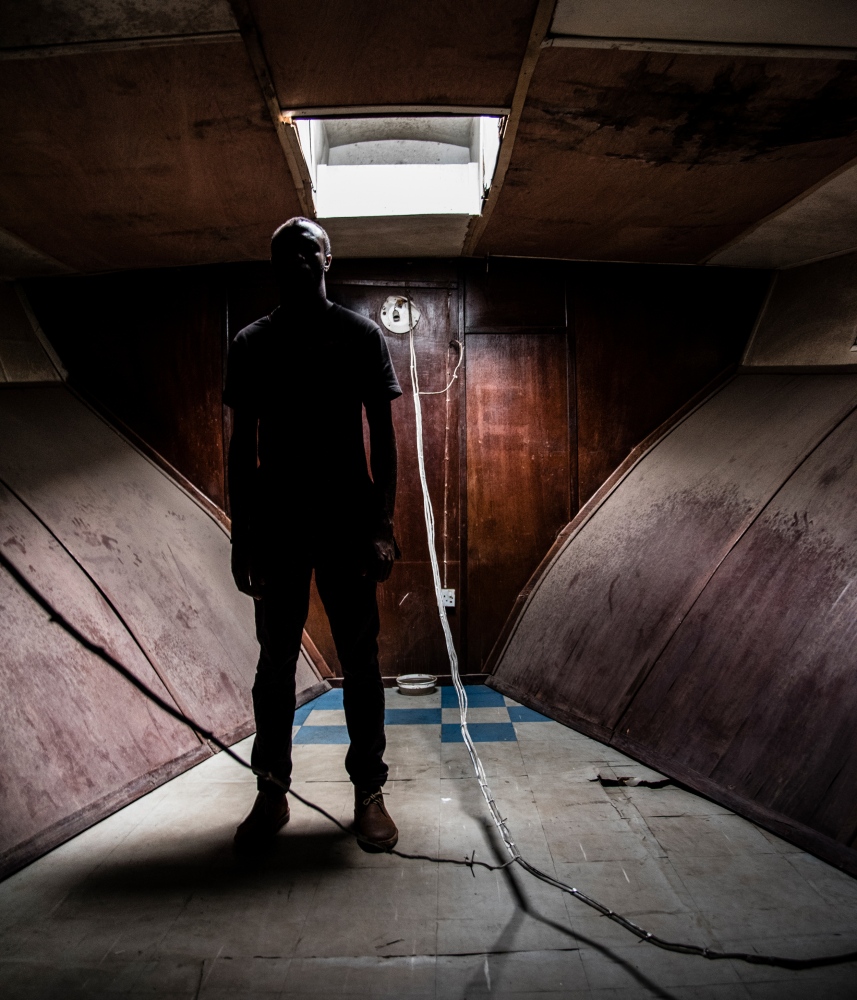 4 of 28 © 2022 Emeka Okereke
Tapestry of Time (Inside NNS Bonny)
War Museum, Umuahia, Abia State, Nigeria.
The only war Museum in the country is located at Umuahia, the capital of Abia State in the Eastern region of Nigeria. It showcases the military history of the Nigerian Civil War. NNS Bonny is one of the ships that fought in the war. This photograph, in addition to many other references, alludes to the obscuring of personal narratives in the many recounts of the war existing today. Thus, it attempts a projection, a superimposition of present-day point of view as a way of complicating and questioning popular history. Where is the place (and voice) of the people who suffered, died or lost loved ones in the war?

THE BUNKER from Emeka Okereke on Vimeo.

Filmed at the "Ojukwu Bunker" built by the Biafran soldiers during Nigeria-Biafra War of 1967 - 1970. Today the bunker is part of the National War Museum of Umuahia Nigeria. This film is a commentary on historical dispositions as projected by voices of some laudable African intellectuals through excerpts of their writings. 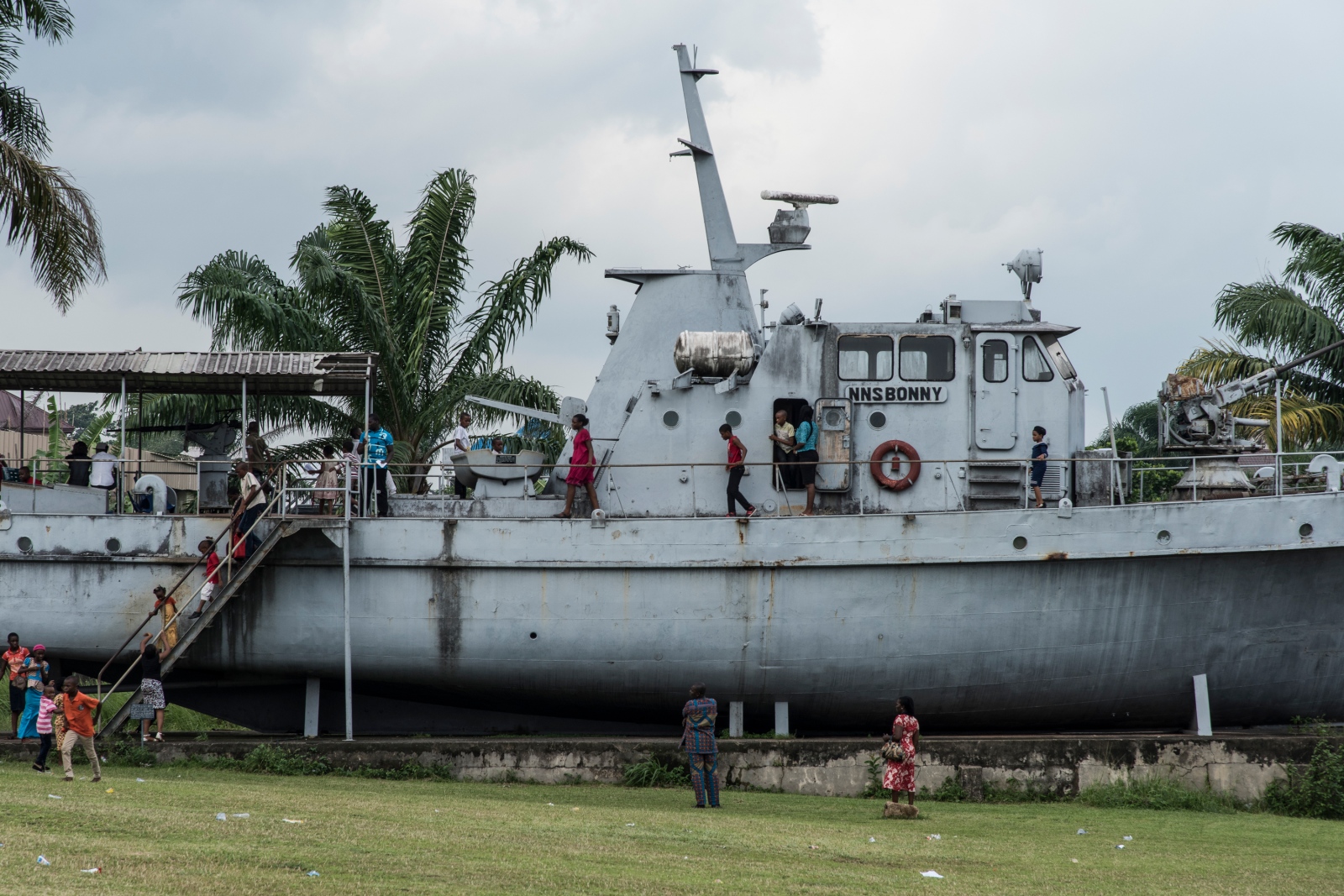 5 of 28 © 2022 Emeka Okereke
Visit Time at The War Museum Umuahia, Umuahia, 2016.
Children playing around the NNS Bonny one of the warcraft ships used by the Nigerian Navy during the Civil War. 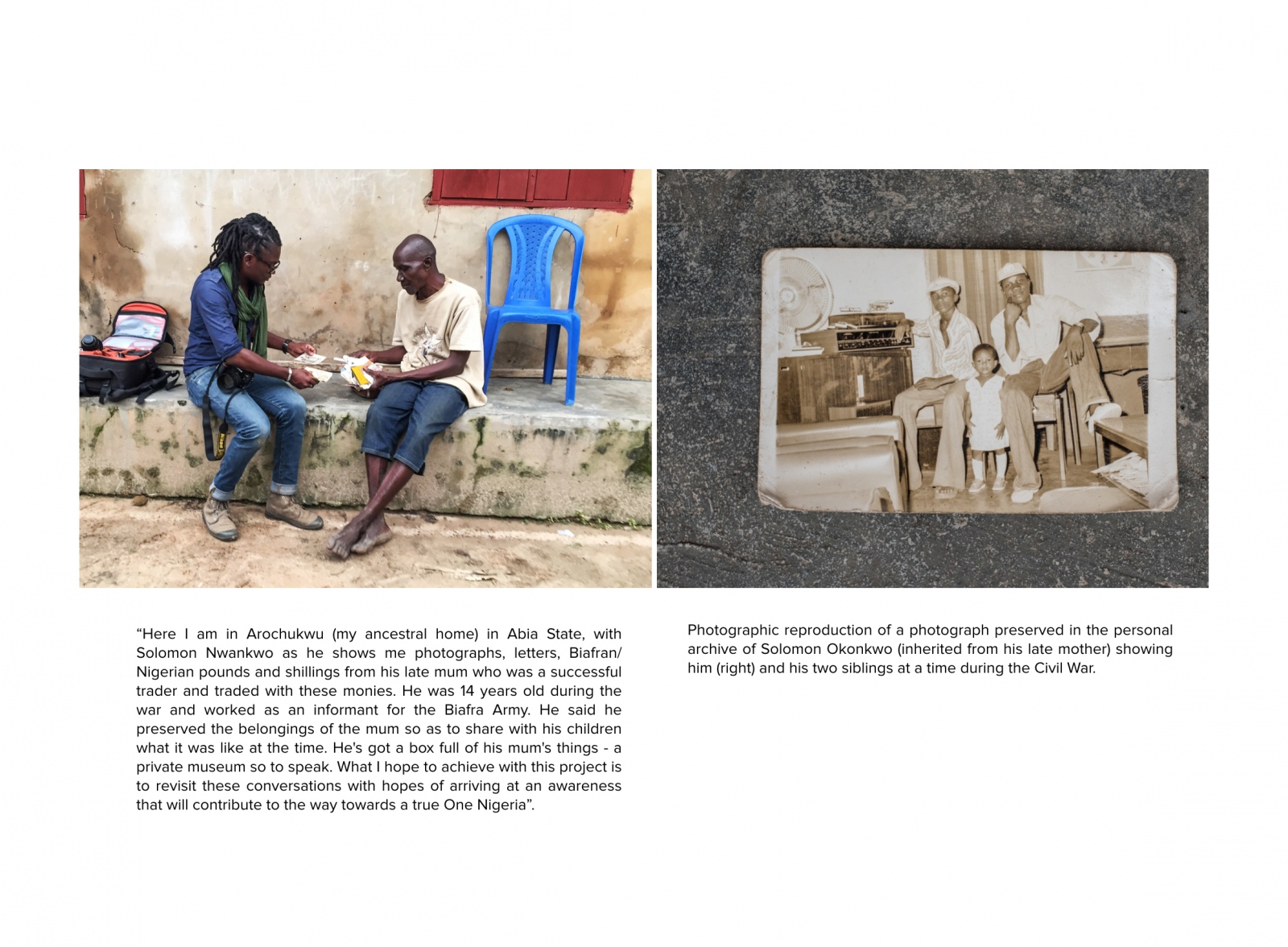 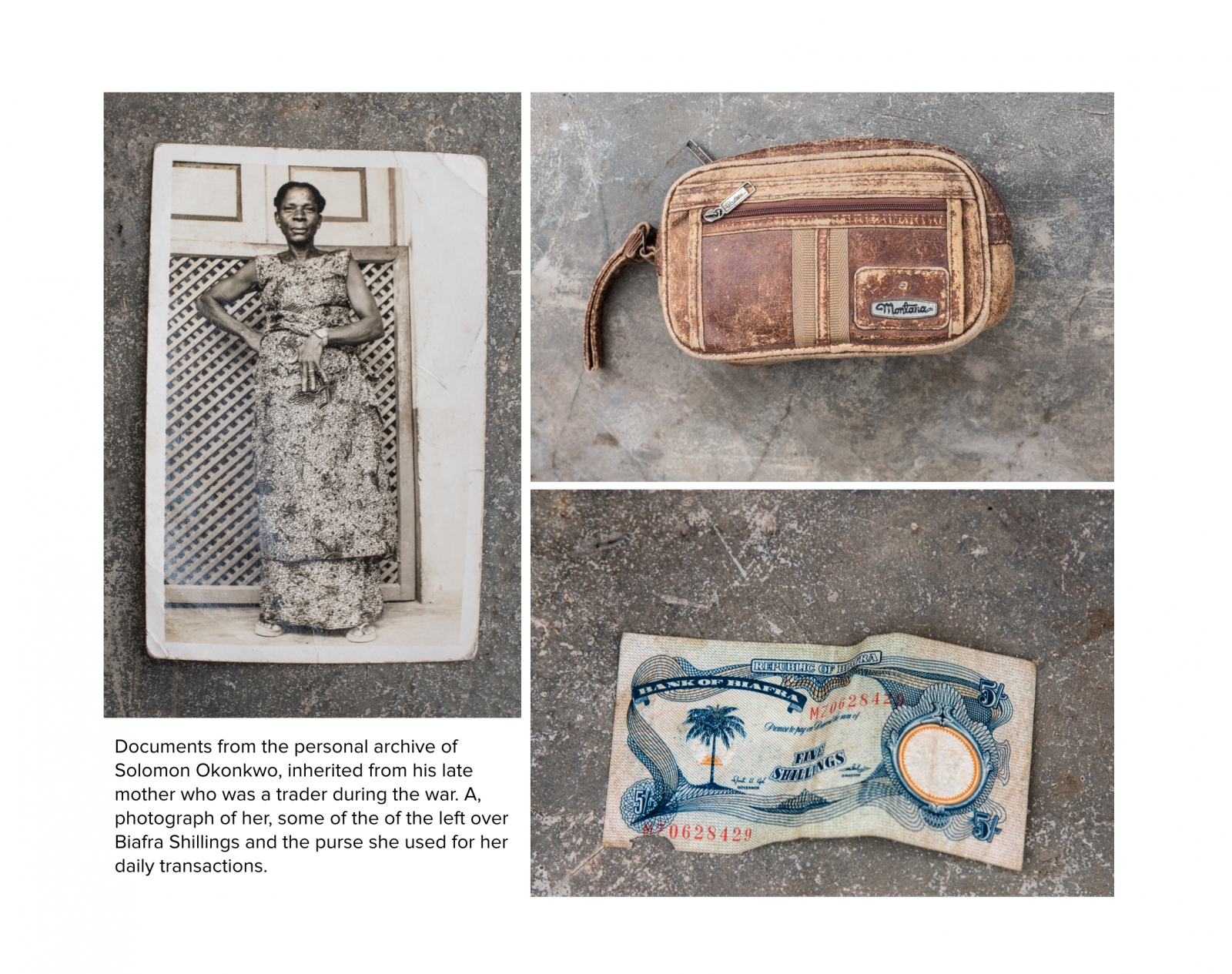 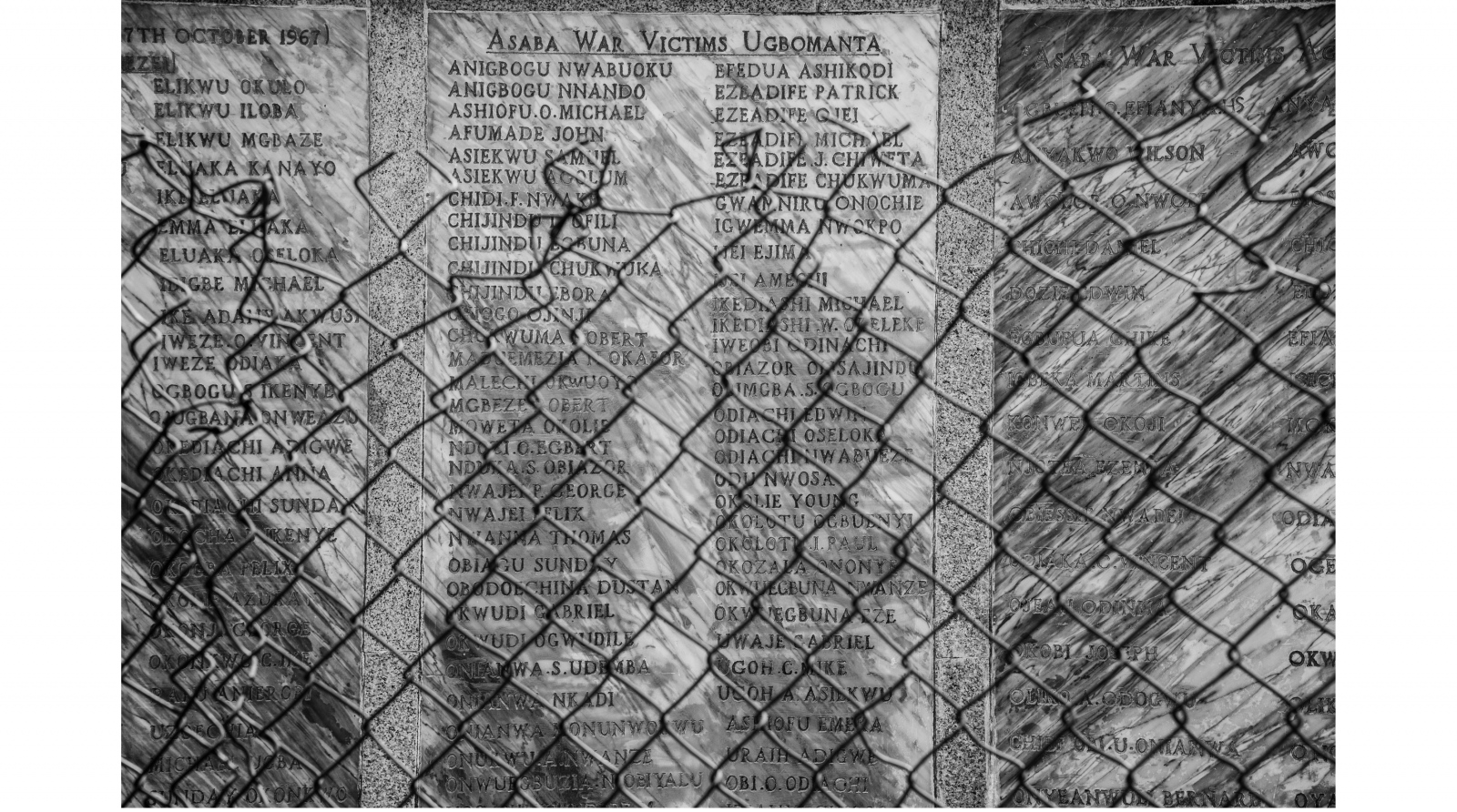 8 of 28 © 2022 Emeka Okereke
NOW THAT LAUGHTER, BROKEN IN TWO, HANGS TREMULOUS BETWEEN THE TEETH,
REMEMBER, O DANCERS, THE LIGHTENING BEYOND THE EARTH…
THE SMELL OF BLOOD ALREADY FLOATS IN THE LAVENDER-MIST OF THE AFTERNOON.
THE DEATH SENTENCE LIES IN AMBUSH ALONG THE CORRIDORS OF POWER;
AND A GREAT FEARFUL THING ALREADY TUGS AT THE CABLES OF OPEN AIR. 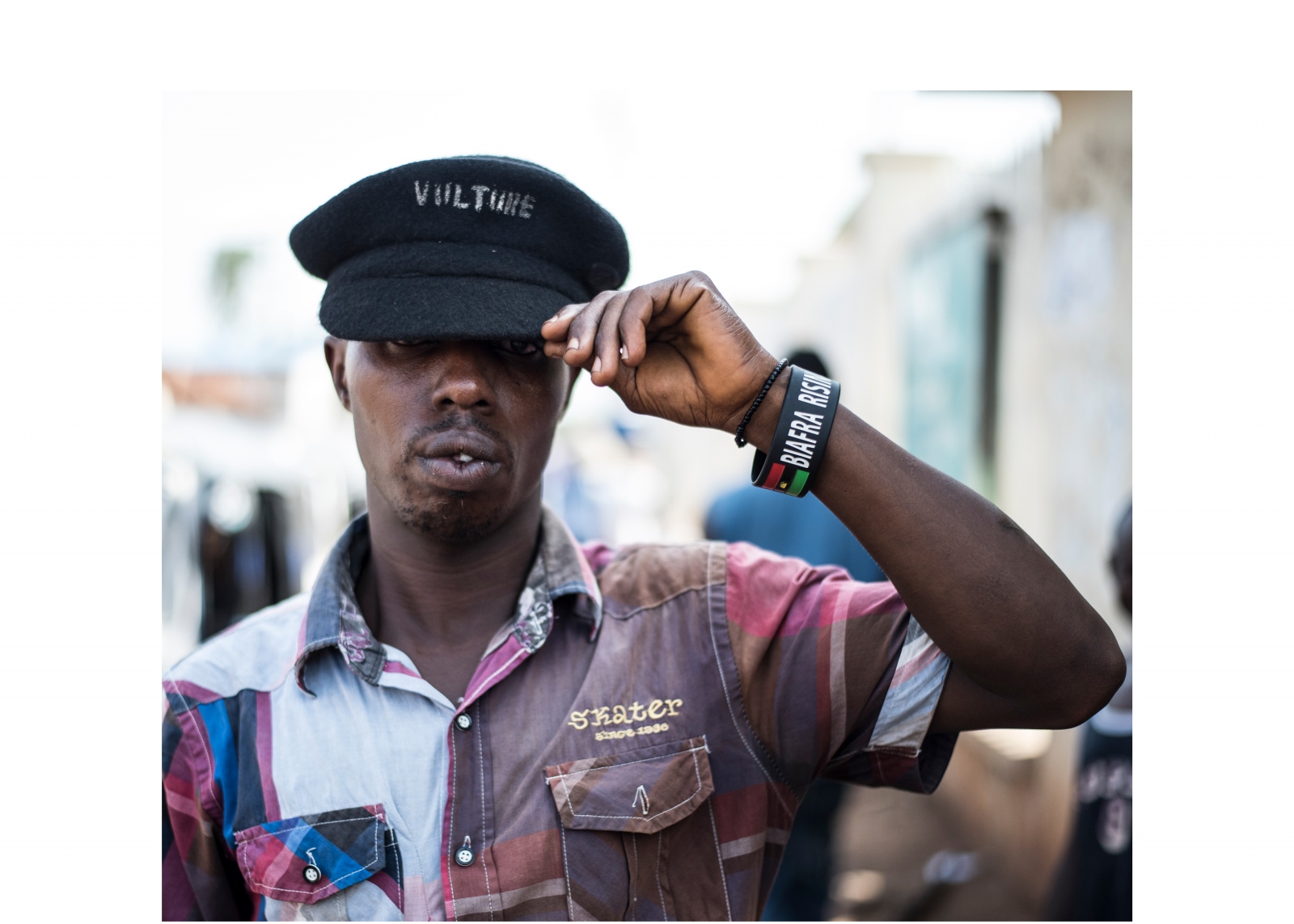 9 of 28 © 2022 Emeka Okereke
My Name is Vulture, Asaba, 2016.
A Pro-Biafran youth in Asaba, site of the Asaba Massacre of 1967 who believes that Nigeria should dissolve and The Republic of Biafra reinstated. He is a member of a new Organisation known as the Indigenous People of Biafra (IPOB) and he is ready to go to war for the sake of Biafra if need be.

TODAY – FOR TOMORROW, TODAY BECOMES YESTERDAY:
HOW MANY MILLION PROMISES CAN EVER FILL A BASKET…

10 of 28 © 2022 Emeka Okereke
Here we think only of Beginnings
River Benue Bridge, Makurdi 2016.
River Benue (site of the making of this image) is one of the two rivers that are visible symbols of Nigeria’s amalgamation, but also her regional/ethnic divides. 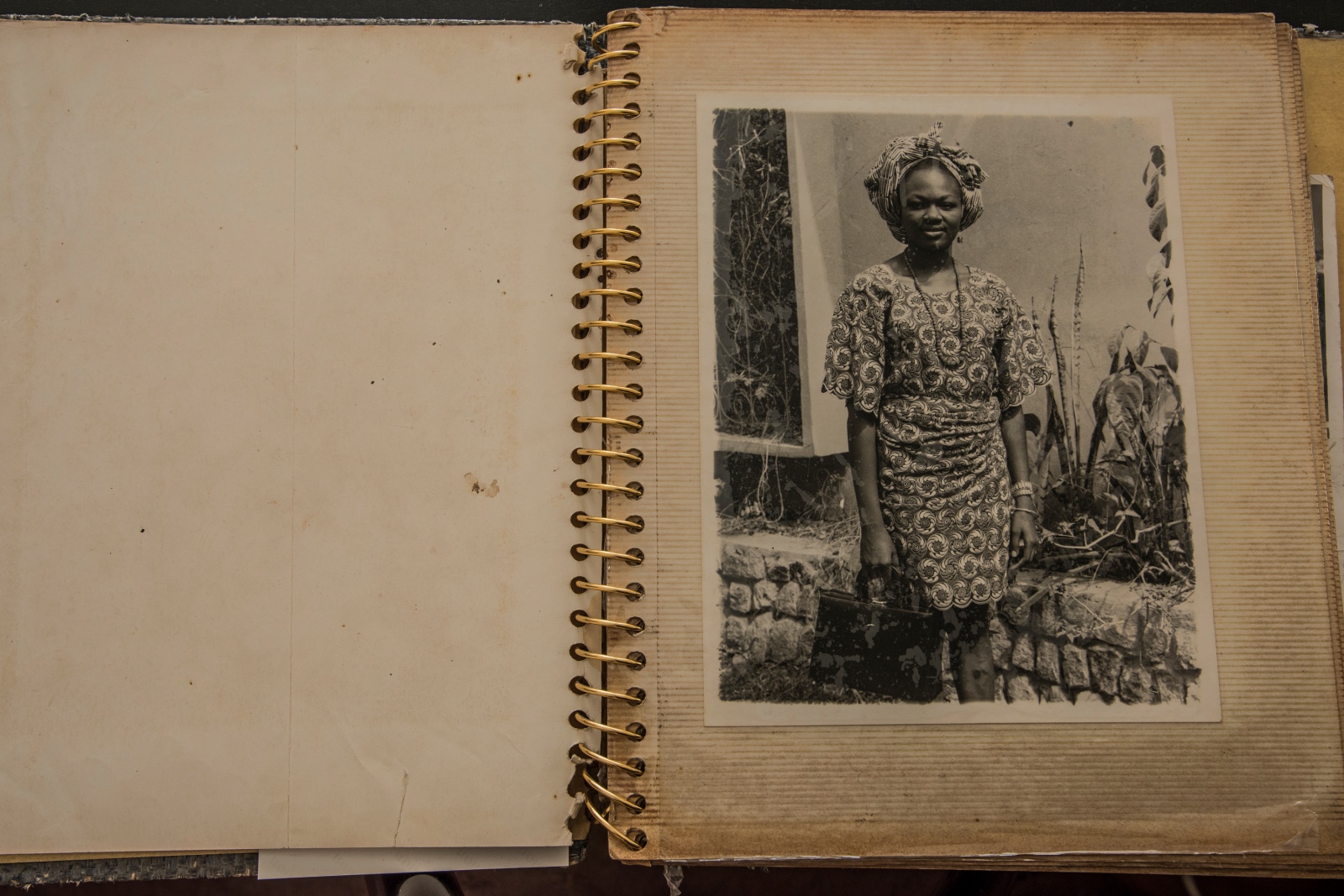 11 of 28 © 2022 Emeka Okereke
Mrs Effiong
Calabar, 2016.
Mrs. Effiong passed away while Colonel Effiong was detained in jail as a political prisoner after the civil war. She died through a ghastly motor accident on her way to the prison to visit him.
From private archives of Colonel Moses Effiong. 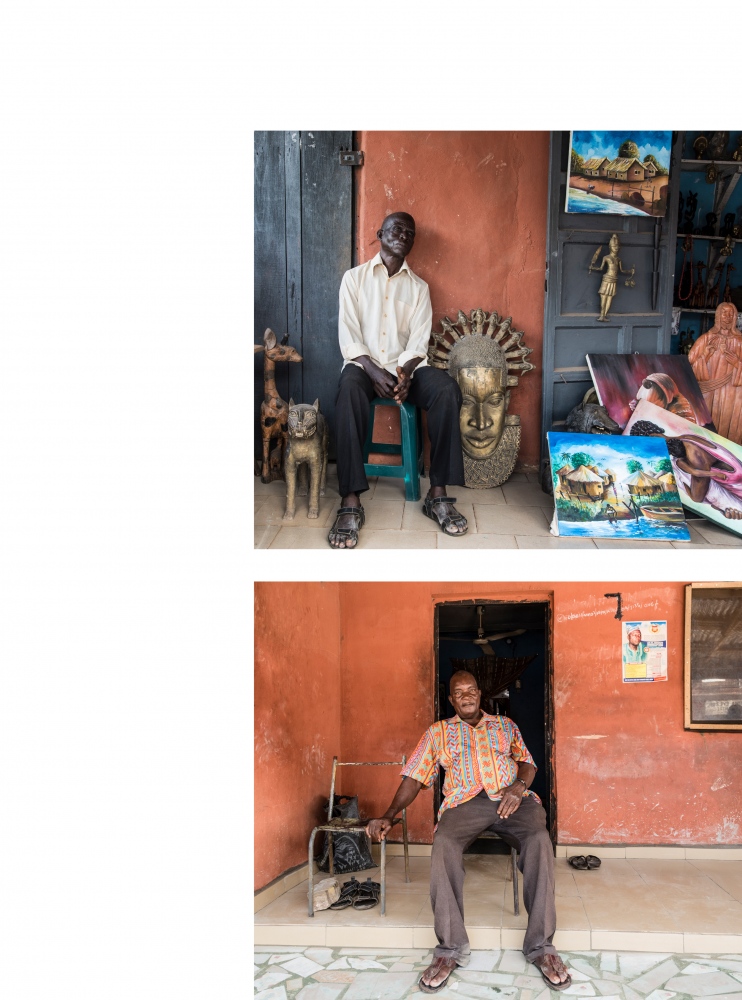 ONTO OUR FORGOTTEN SELVES, ONTO OUR BROKEN IMAGES;
BEYOND THE BARRICADES
COMMANDMENTS AND EDICTS, BEYOND THE IRON TABLES,
BEYOND THE ELEPHANT’S
LEGENDARY PATIENCE, BEYOND HIS INVIOLABLE BRONZE
BUST; BEYOND OUR CRUMBLING TOWERS –

13 of 28 © 2022 Emeka Okereke
Two faces of the Comprador, Lokoja, 2016.
Samuel Ajayi Crowther (b.1805) was a linguist, the first African Anglican Archbishop and founder of the first ever primary school in northern Nigeria in Lokoja (site of the making of these images) – amongst many other numerous selfless achievements including working for the abolition of slavery in Nigeria. His ambiguous position as one of the agents who, working with the British missionaries, brought christianity to Nigeria and how in turn christianity served as a conduit for the colonisation of Nigeria placed him in par with the early West African elite, of which he was a leading light – those who formed what Marxists would call a “comprador” collaborating with Colonialism.

FIRST TIME BIAFRA
WAS HERE, WE’RE TOLD, IT WAS A FINE
FIGURE MASSIVELY HEWN IN HARDWOOD.
VORACIOUS WHITE ANTS
SET UPON IT AND ATE
THROUGH ITS HUGE EMPLACED FEET
TO THE GREAT HEART ABANDONING
A FURROWED, EMPTIED SCARECROW.
AND SUN-STRICKEN WAVES CAME AND BEAT CRAZILY
ABOUT ITS FEET EATEN HOLLOW
TILL CRASHING FACEDOWN IN A MILLION FRAGMENTS
IT WAS FLOATED GLEEFULLY AWAY
TO COLD SHORES—CARTOGRAPHERS ALONE
MARKING THE COASTLINE
OF THAT FORGOTTEN MASSIVE STANCE.
IN OUR TIME IT CAME AGAIN
IN PAIN AND ACRID SMELL
OF POWDER. AND FURIOUS WRECKERS
EMBOLDENED BY HALF A MILLENNIUM
OF CONQUEST, BATTERING
ON NEW OIL DIVIDENDS, ARE NOW
AT ITS BLACK THROAT SQUEEZING
BLOOD AND LYMPH DOWN TO
ITS HANDS AND FEET
BLOATED BY QUASHIOKOR.
MUST AFRICA HAVE
TO COME A THIRD TIME?

Chinua Achebe, 1969
From the memoir: There Was A Country
Close

“As We Recede” is a project about Nigeria, one of the most populous and ethnically diverse countries in Africa. It is a ritual of remembrance that looks at periods and events ranging from the founding and naming of the country in 1914 by the British Colonial Governor General Lord Frederick Lugard and his fiancée Flora Shaw, to the Nigeria-Biafra war in 1967 – seven years after her independence – a war that was inevitable considering the fictitious foundation of colonial agenda upon which the country was conceived.

This project departs from the premise that 49 years after the civil war, much of the void between ethnic groups and persons still remain, mainly due to the deliberate attempts by governments and leaders to induce amnesia. This void, over the years, have become sites of tension between peoples trapped in this act of naming of an area which took place a century ago. The dust of dissolution thought to have settled after the war, has resurfaced – giving credence to the premonition of the late poet Christopher Okigbo (who died in the line of duty, during the civil war) when, in Come Thunder, he proclaimed: “The smell of blood already floats in the lavender-mist of the afternoon… and a great fearful thing already tugs at the cables of open air”. This project seeks to revisit history and its unfolding and by so doing, propose a cartography which explores the tensions and disruptions in the space between past and present.

It has a nostalgic quality to it, in that it is predicated on recollection, on lived memories. As an image maker, my approach is to look at the personal archives (a private museum so to speak) of survivors or their relatives, consisting of objects that serve as memorabilia from the days of the war. This could be in the form of documents, currency notes, photographs, jewelleries, clothes or any other significant personal possession. I shall make photographic reproductions of these memorabilia, which I consider relics of a conflict. They carry within them strands of stories preserved in their existence, in each and every dent of usage over the years.

So far, I have travelled (during the Borders Within Trans-Nigerian Road Trip) across 14 States in Nigeria photographing and collecting “residues of memories” from veterans and survivors of the civil war. I equally visited numerous sites of historical occurrences upon which Nigeria was founded. Works such as Ruptured Rapture (Hope Waddell Training Institution/ Calabar River, 2016), “Here We Think Only of The Beginning of Things” (River Benue Bridge, Makurdi, 2016), Tapestry of Time (War Museum Umuahia, 2016) are photographic re-enactments on historical sites, infrastructures and monuments that propose reengagement with the past from one’s foothold in the present. The collected memories, as well as photographic re-enactments are mediated by voices of poets and writers whose works at the time, and more so now, served as premonitions and hints of what future is being woven.

'I Wonder As I Wander': On Akinbode Akinbiyi