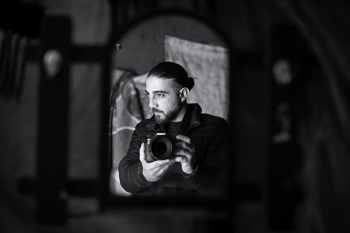 Muheisen is a Jordanian national who was born in Jerusalem in 1981, graduated with a B.A. degree in journalism and political science. Since 2001 he has documented major events around the world, in Asia, the Middle East, Europe, Africa, and the United States of America as well as events in Saudi Arabia, China, Afghanistan, Pakistan, Egypt, Jordan, France, Greece, Germany, Croatia, Austria, New York, the Netherlands, Serbia, Hungary, Cyprus, South Africa, and Uzbekistan. For over a decade he has been documenting the refugee crisis around the world. In 2015, Muheisen established the Dutch non-profit organization Everyday Refugees Foundation which aims to document, educate, help and empower refugees, local communities, and internally displaced people by conflict, poverty, discrimination, and natural disasters in different parts of the world.

Among other exhibitions, a collection from a decade of his work about “Life in War” was exhibited in the French photo festival Visa pour L’Image in Perpignan. His work about refugees was exhibited at Festival des Libertes in Brussels, Belgium, his photographs about displaced people was exhibited at THE FENCE in Brooklyn, Atlanta, Boston, and Houston, USA, “Faces of War” was displayed at MidExpo in Moscow, Russia, also a selection of his work “Pursuit of Happiness” was exhibited at the Angkor Photo Festival in Siem Reap, Cambodia and for two-year in a row, his work “Victims of War” and “Faces of Sharjah” was exhibited at Xposure International Photography Festival in Sharjah, UAE. In October 2018, his exhibition “Light on the Move” was displayed at the Museum of Cycladic Art in Athens, Greece with an official opening ceremony. In March 2019 “Light on the Move” was on display during the International Film Festival and Forum on Human Rights in Geneva, Switzerland.

In September 2019, a selection of his images was displayed by the UNDP at Brooklyn Bridge Park in New York at Photoville. His exhibition “Our World” is displayed since 2019 at the Four Seasons hotel in Amman, Jordan, in support of cancer patients at the King Hussein Cancer Center and Foundation. In November 2020 his photo exhibition “Lest We Forget” organized by the Jordanian Embassy in Japan was displayed at the JICA Global Plaza in Tokyo and in February 2021 “Lest We Forget” traveled to Noshiro City. From 10 – 13 February 2021, his photo exhibition “Voices” was displayed at the Expo Centre in Sharjah, UAE, during Xposure International Photography Festival. Muheisen’s photo exhibition “Voices” traveled from Sharjah, UAE, to Coimbra, Portugal and is currently displayed at Museo Municipal Coimbra from 29 May until 25 July 2021.
Sign-up Log In
Cart
Loading...
Edit Check Out