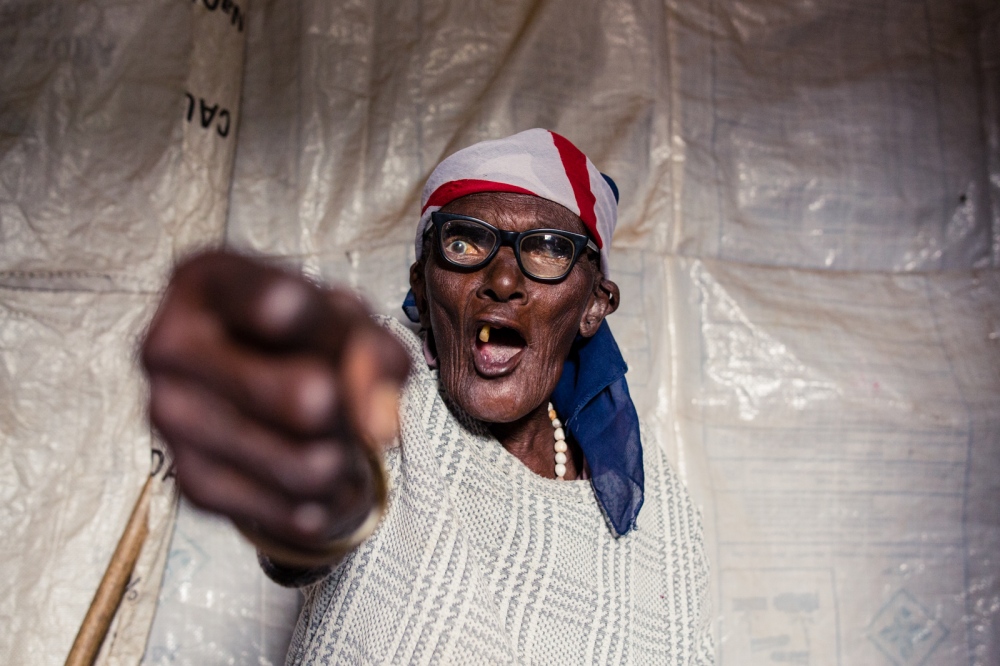 Nairobi, KENYA, February 28, 2017: Helen Wairimu, 106, is the oldest participant of the ‘Shosho Jikinge’ (Engl.: ‘Grandmother defend yourself’) group in the Korogocho township. A rape survivor, Helen has been training self-defense techniques with around 20 other ladies, aged between 55-106 years, for six years. In 2016, a heavy-set, young man came to Helen’s hut and raped her. Helen still participates in the class every week, eager to encourage the other women to train harder through her role as a survivor. 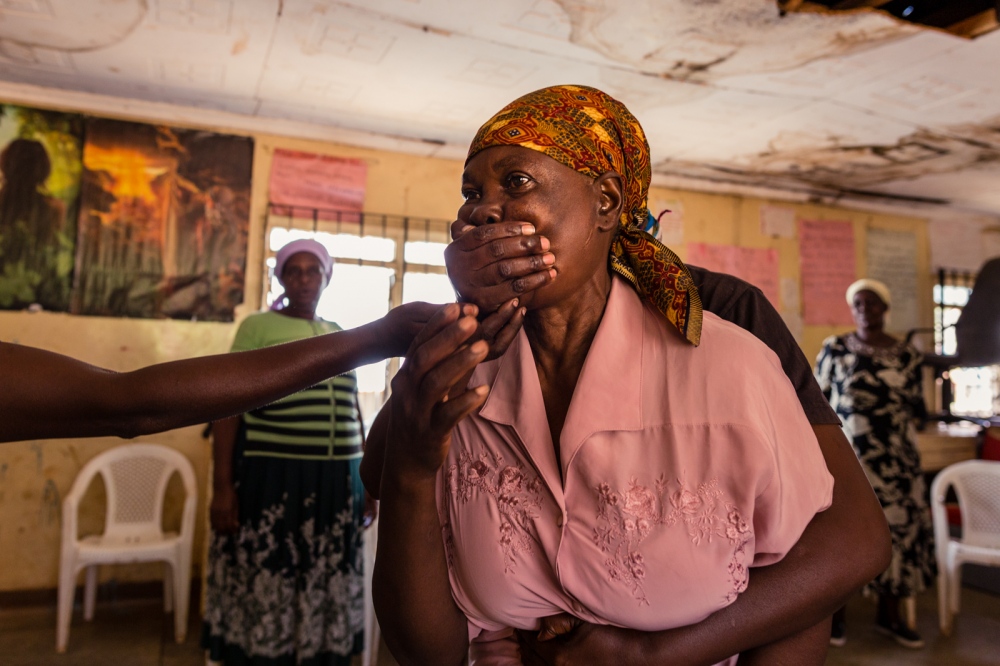 Nairobi, KENYA, February 23, 2017: A participant of the 'Shosho Jikinge' (Engl.: 'Grandmother defend yourself') group in the Kibera township practices a technique to break free from a grip. 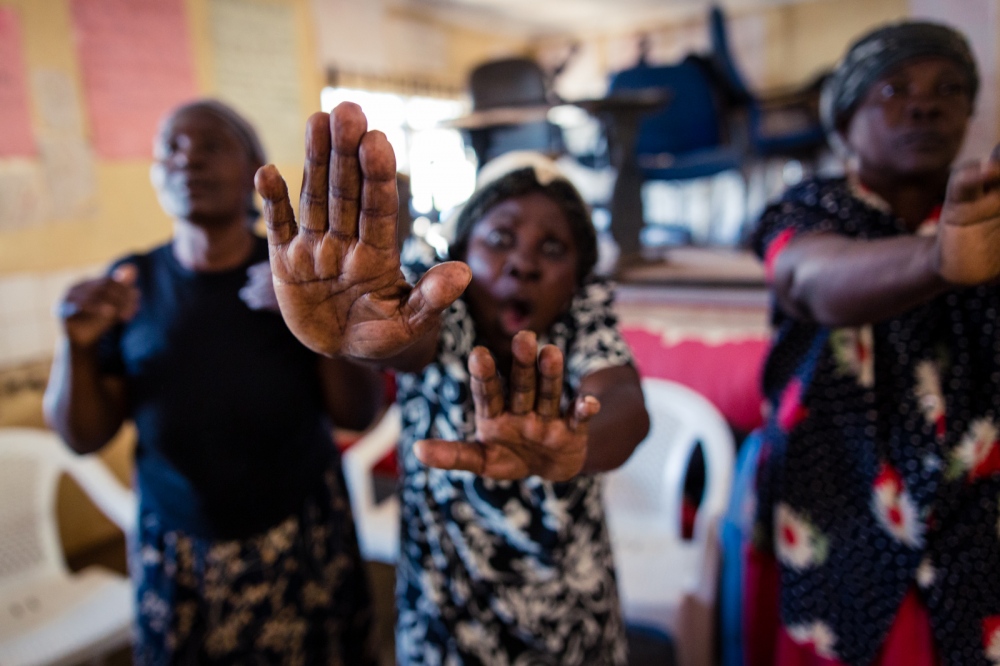 Nairobi, KENYA, March 2, 2017: Flora Masista (C), 64, practices a self-defense technique, whilst screaming 'Nooo!' during a 'Shosho Jikinge’ class in the Kibera township. Flora has been training with the other Shoshos for five years and has since applied various tricks she learned: she has escaped potential attackers by lying, tricking and negotiating her way out of dangerous situations. 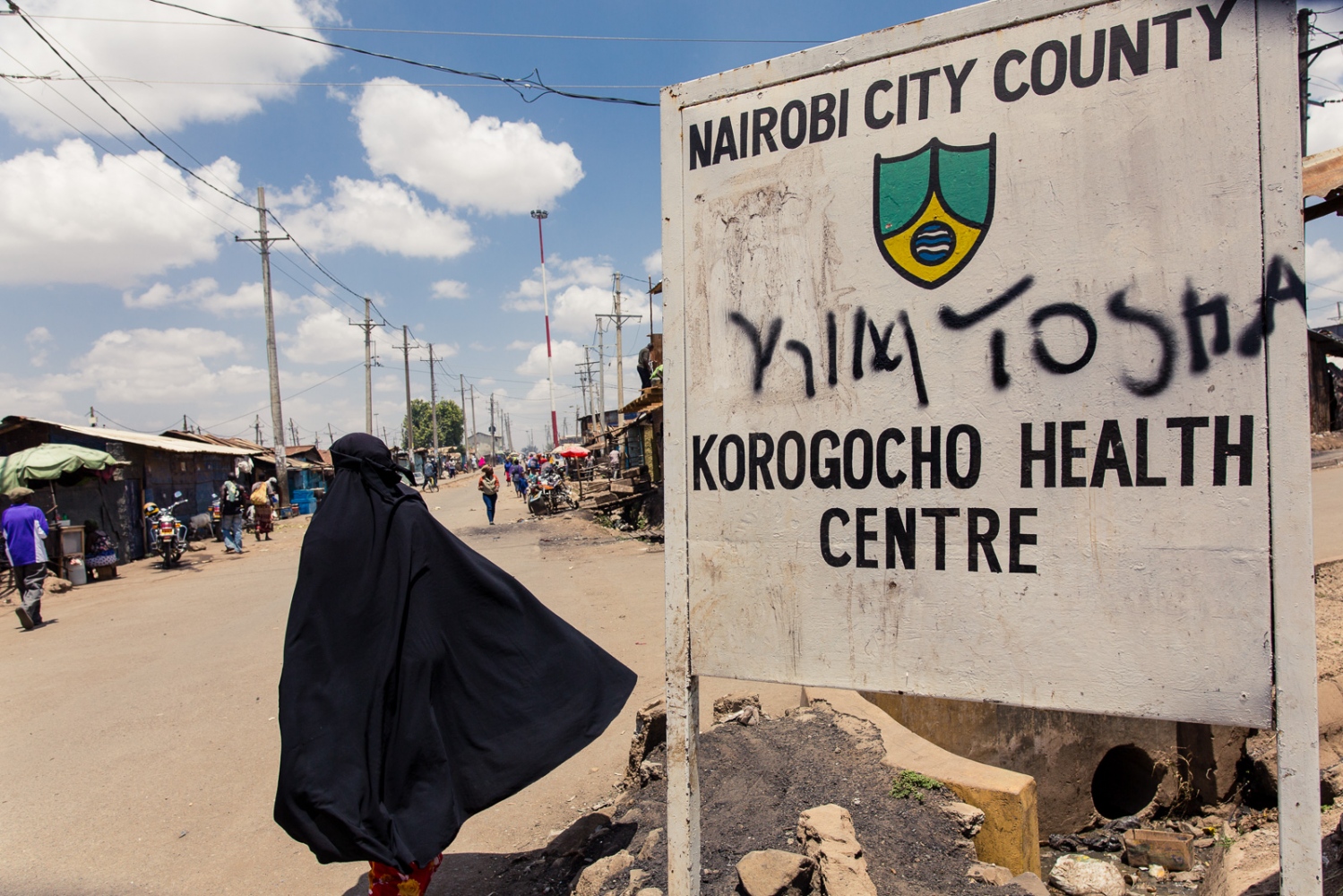 Nairobi, KENYA, February 28, 2017: A woman walks along a street in the Korogocho township, where elderly ladies have been a target of sexual violence, as a superstition persists, which says that having sex with a grandmother will cure one from HIV and wash off all criminal sins. 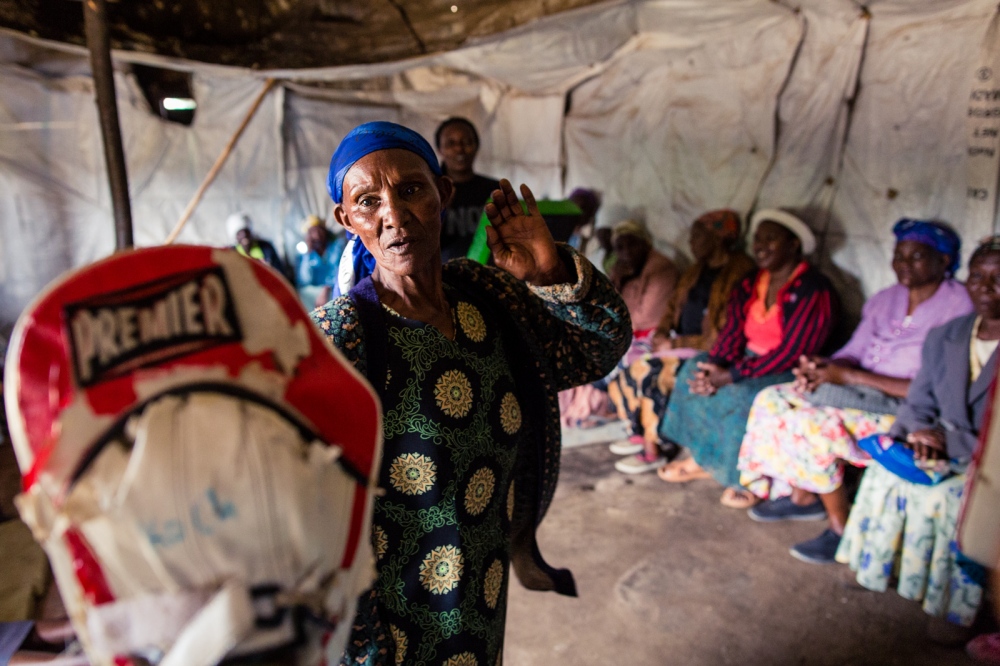 Nairobi, KENYA, February 21, 2017: Beatrice Njeri Murange, 71, practices a palm punch during a 'Shosho Jikinge' class in the Korogocho township, as others look on. Beatrice has successfully applied various skills she learned during the class, escaping potential attackers. Nowadays, she feels more confident and comfortable when walking through the streets of the township. 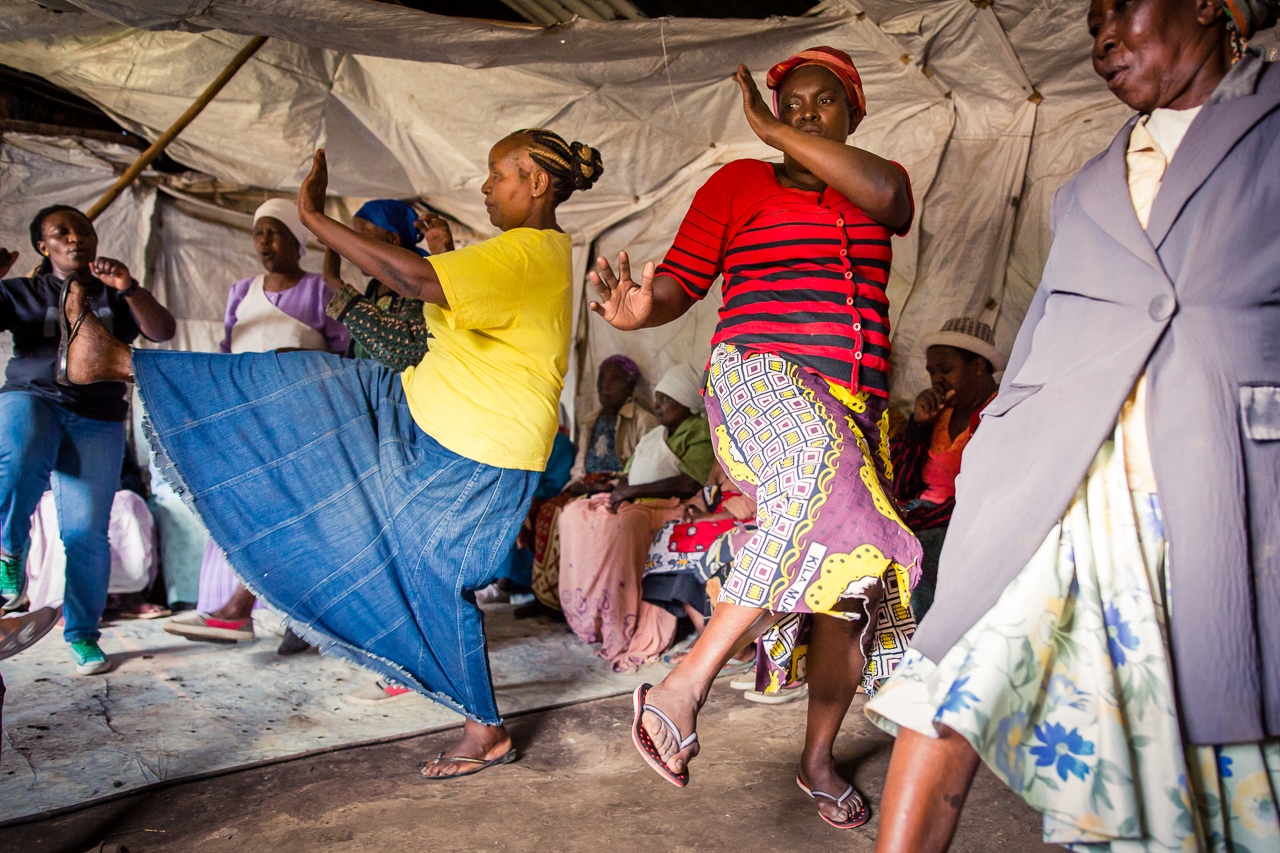 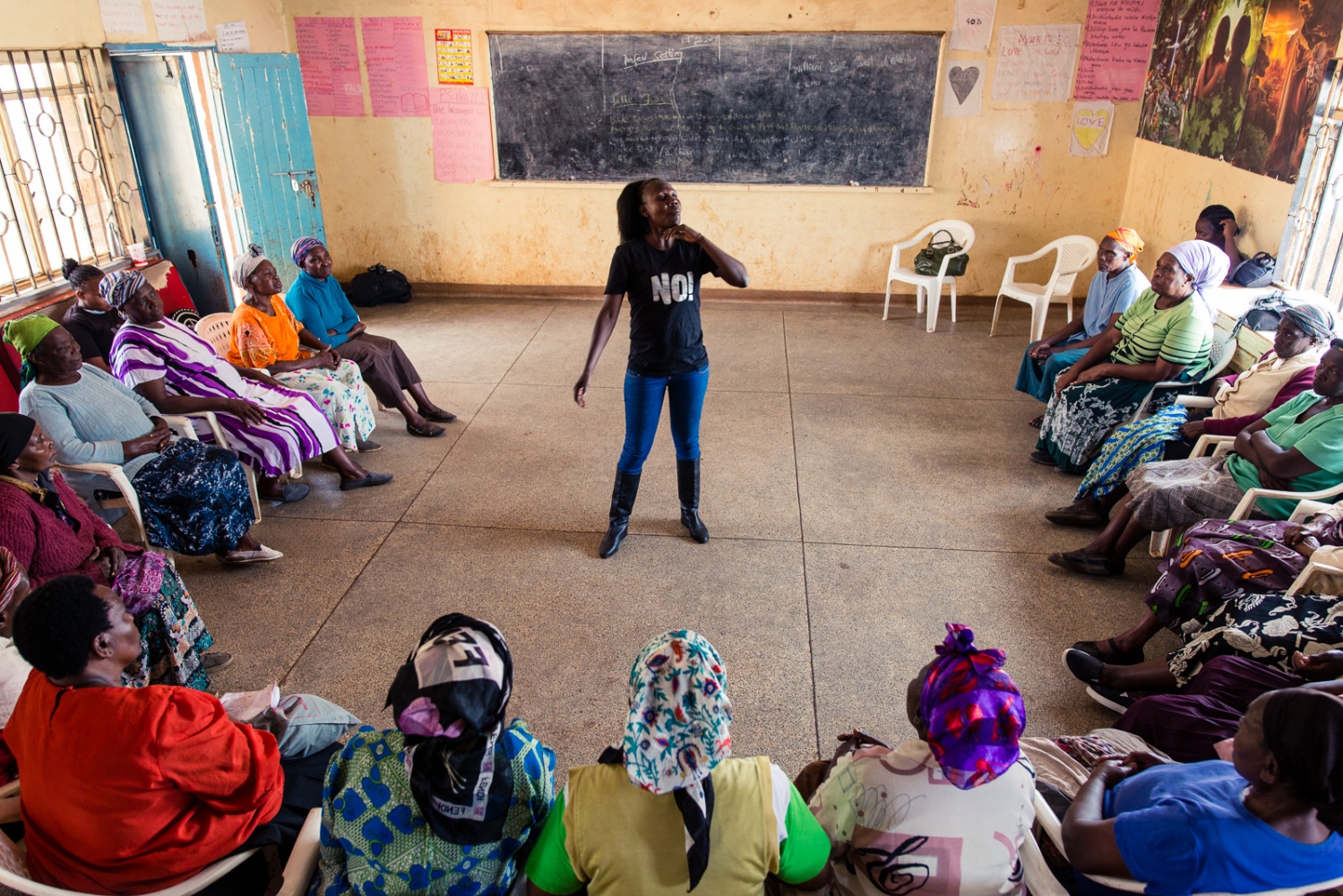 Nairobi, KENYA, February 23, 2017: Everlyne Odhiambu (C), 36, an instructor for the 'Shosho Jikinge' group in the Kibera township, encourages the participants to use their voices when being molested by men. 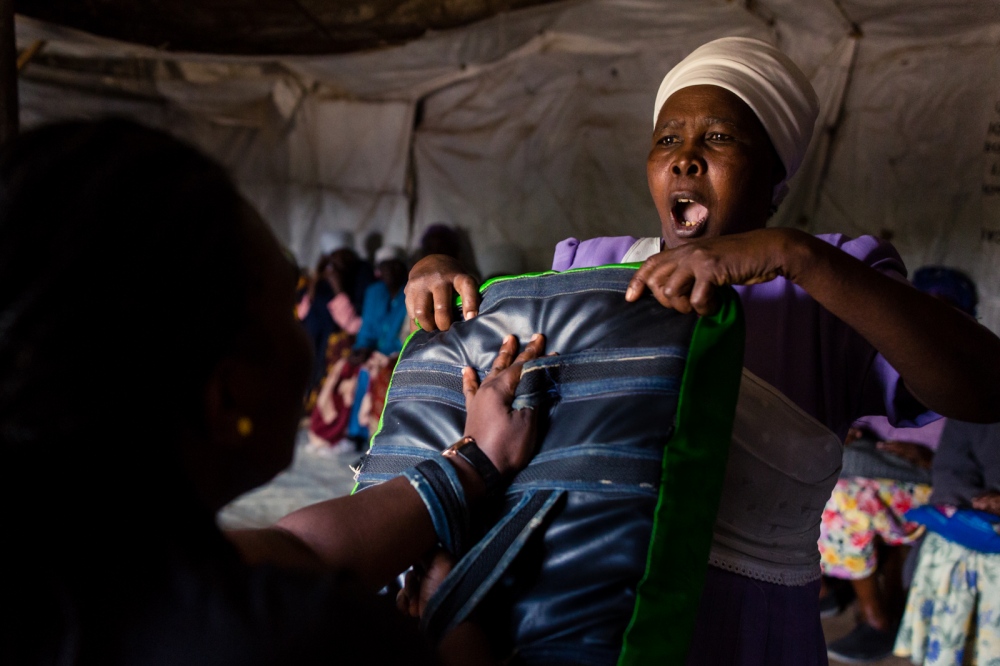 Nairobi, KENYA, February 21, 2017: A participant of the 'Shosho Jikinge’ (Engl. 'Grandmother defend yourself') group in the Korogocho township screams ‘No’ whilst practicing a self-defense technique. Most of the women in the group, aged between 55-106 years, have successfully fought of potential attackers since joining the class. 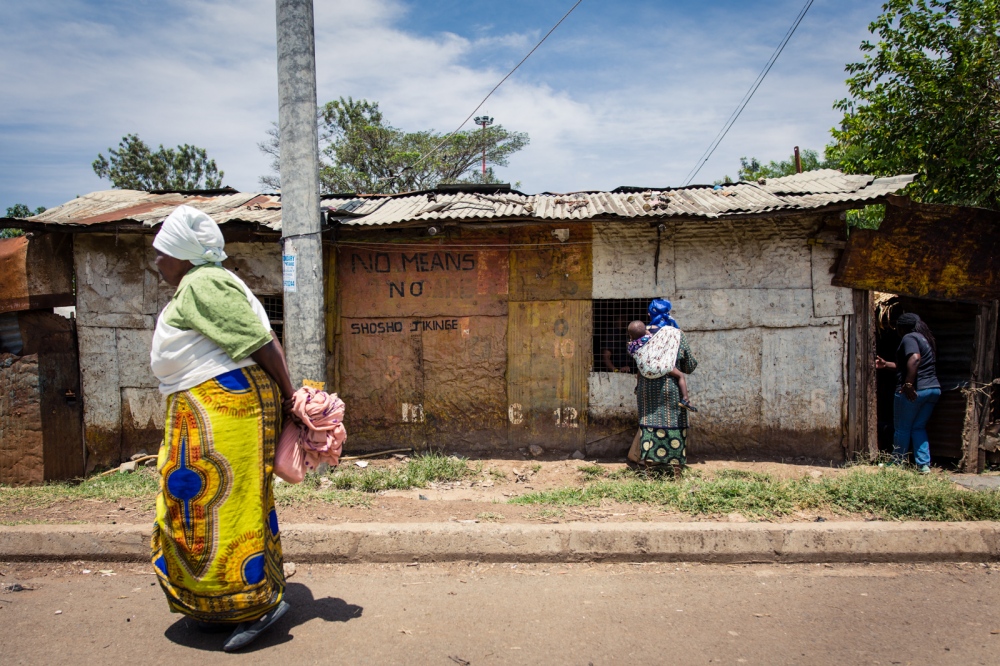 Nairobi, KENYA, February 21, 2017: Participants of the 'Shosho Jikinge' (Engl.: Grandmother defend yourself') group leave after a training session in the Korogocho township. 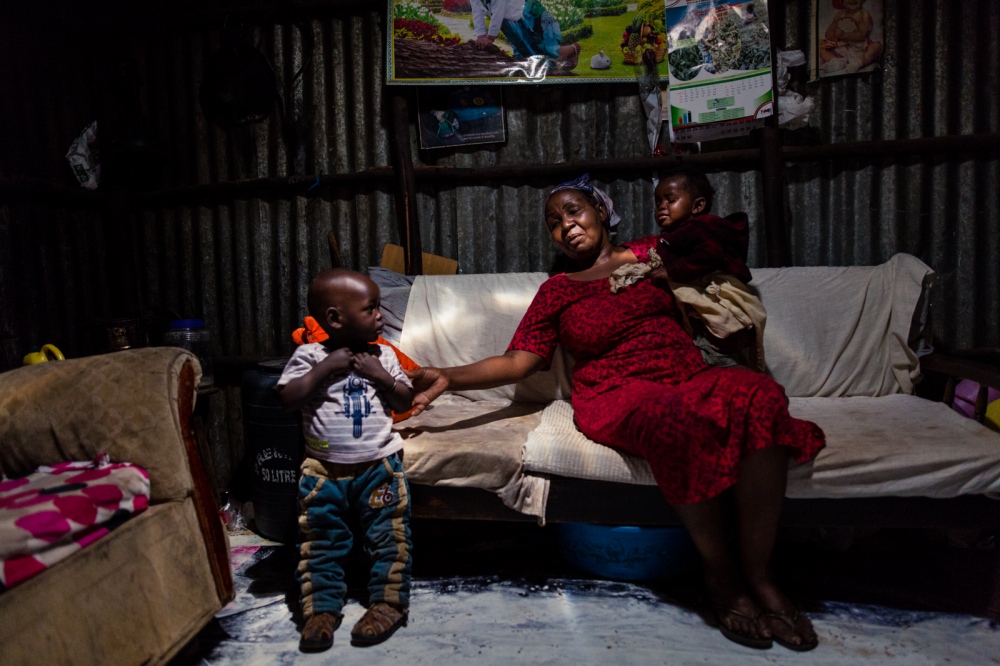 Nairobi, KENYA, February 20, 2017: Elizabeth Kamau, 60, inside her hut in the Korogocho township with one of her ten grandchildren and the child of her adopted daughter. "I like being a good role model to children by showing them that a woman can be strong and empowered", she says. Elizabeth has been training with the 'Shosho Jikinge' (Engl.: 'Grandmother defend yourself') group since five years and has succesfully applied self-defense techniques to fight off potential sexual attackers. 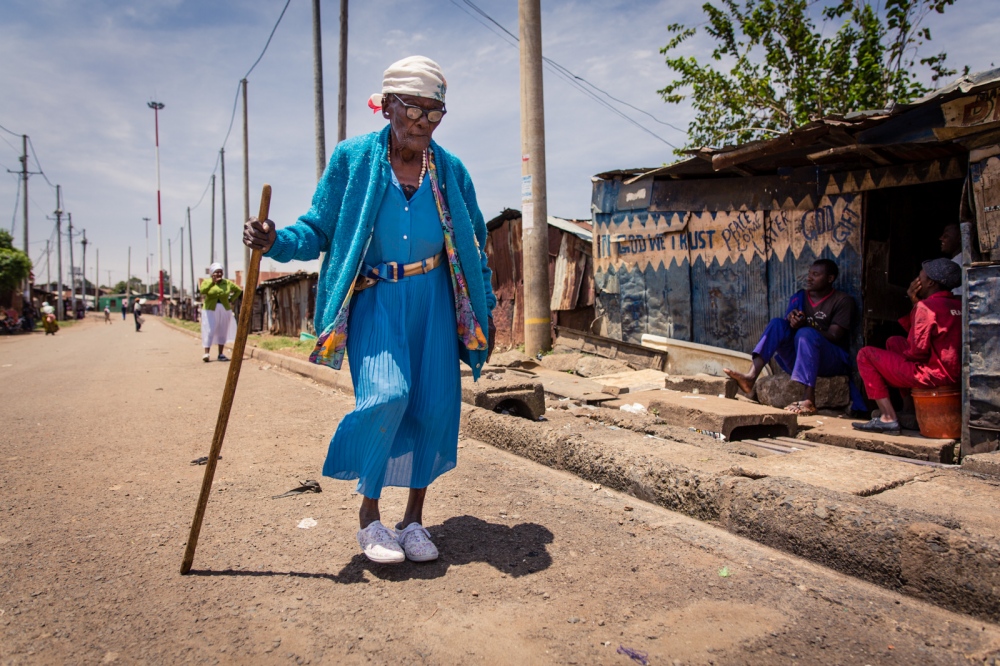 Nairobi, KENYA, February 21, 2017: Helen Wairimu, 106, walks home after a 'Shosho Jikinge' class. In 2016, when she was 105 years old, a heavy-set, young man came to Helen’s hut and raped her. Helen still participates in the class every week, eager to encourage the other women to train harder through her role as a survivor.

In the Korogocho and Kibera slums in Nairobi, Kenya, one in four women are raped. Older women in particular have been targets in these small villages, as some young men, often under the influence of drugs and alcohol, believe a widespread superstition: that having sex with a grandmother cures HIV and washes off all sins. Recently, with few options, elderly women have begun to fight off these rapists using self-defense techniques. Organized by the international NGO No Means No Worldwide, in collaboration with Ujamaa Africa, a local NGO, groups known as the Shosho Jikinge (“grandmother defend yourself”) have been formed. There, the members, aged between 55-106 years, learn how to identify potential attackers, use their voices, trick their way out of dangerous situations, and fight back.

Nowadays, many of the Shosho Jikinge participants have successfully fought off attackers and effectively prevented sexual violence: the number of reported cases of rape on elderly women in Nairobi’s slums has reduced significantly. Through their self-empowerment, the Shoshos are functioning as role models, influencing the perception of women in Kenyan society for future generations in a positive way.

By Nadja Wohlleben / Berlin, Germany — Illegal Raves in Berlin during the Covid-19 pandemic Commissioned by STERN MAGAZINE in August 2020 Despite..
Jan 15, 2021

a l o n e TOGETHER

By Nadja Wohlleben / Berlin, Germany — Breaking Free (ongoing) Claudia B., 37, was married to her abusive, drug addict husband and father of her..
May 31, 2020

The Long Wait to Freedom

By Nadja Wohlleben / Lageso, Berlin, Germany — The Long Wait To Freedom - Refugee Crisis in Berlin The Syrian Civil War has been raging since March 2011..
Feb 1, 2017

By Nadja Wohlleben / Dubai, UAE — HeartCore Once the realization is accepted that even between the closest human beings infinite distances..
Feb 1, 2017