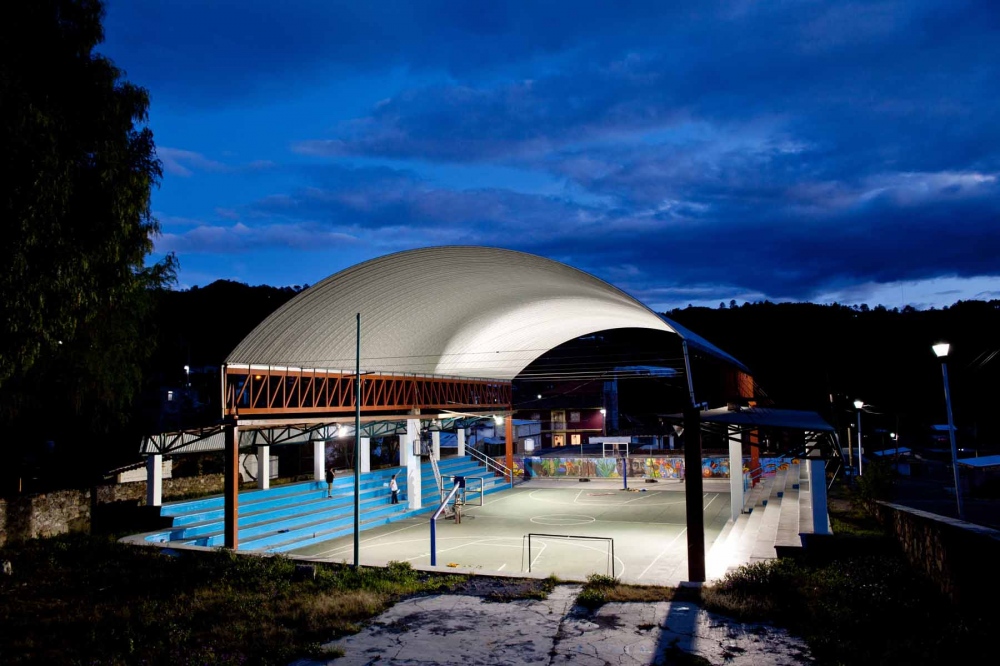 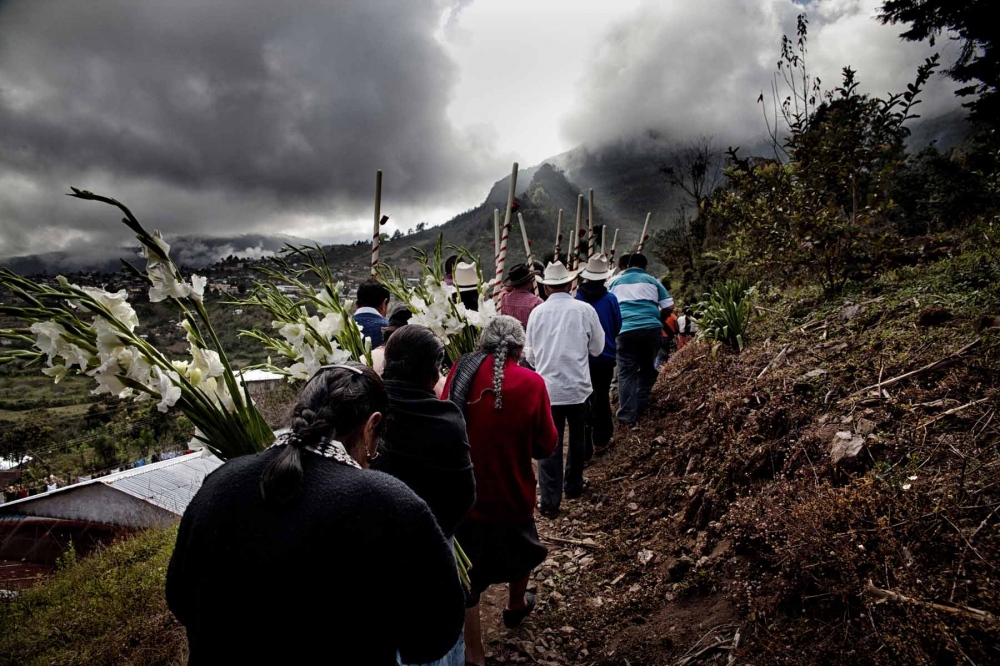 Villagers in Totontepec Mixe march in a "vela," a ceremony of thanksgiving for the safe return of a migrant. Villagers offer flowers and candles to the saint in gratitude for protecting the migrant during his time in the United States. 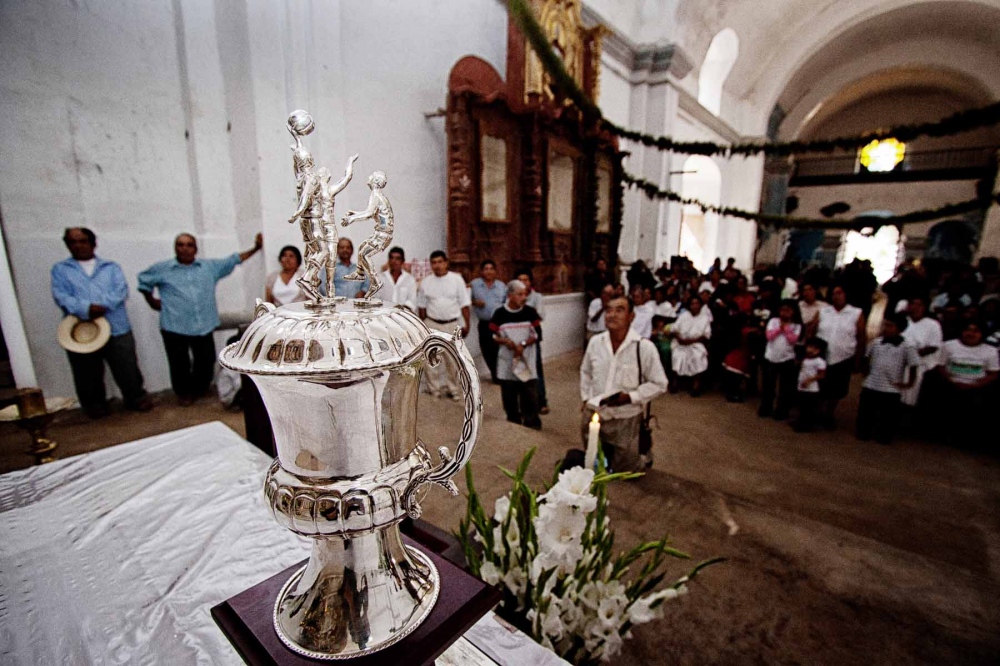 Villagers bless the first place basketball trophy in an early morning ceremony in San Cristobal Lachiroag. The trophy was valued at around $3,000.  © Jorge Santiago 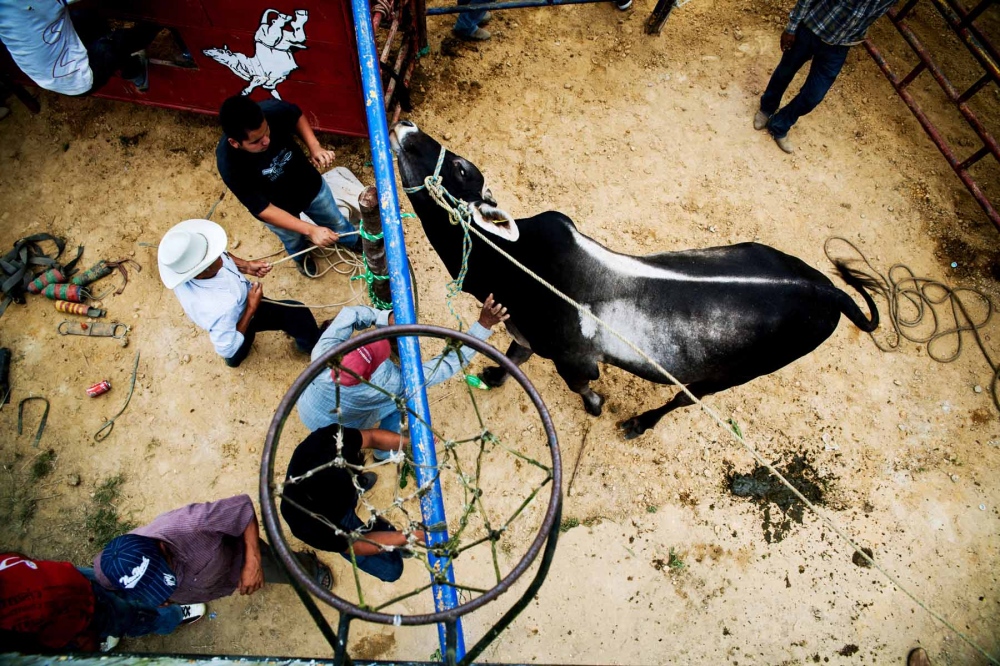 A bull is readied to enter the rodeo ring in Amatepec. Abandoned makeshift basketball courts are a common sight throughout the Sierra Juarez. 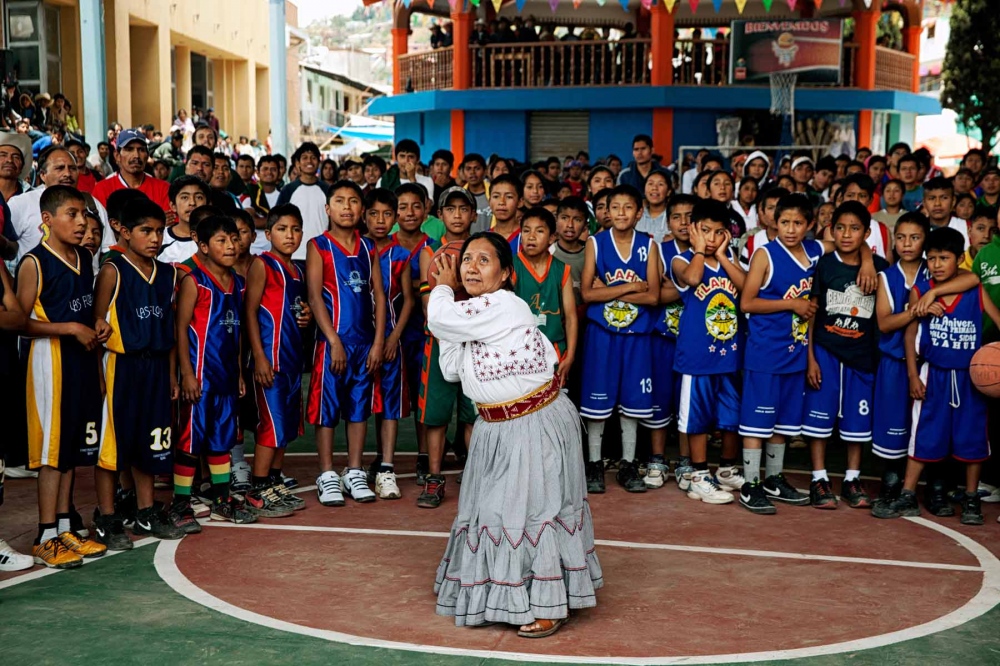 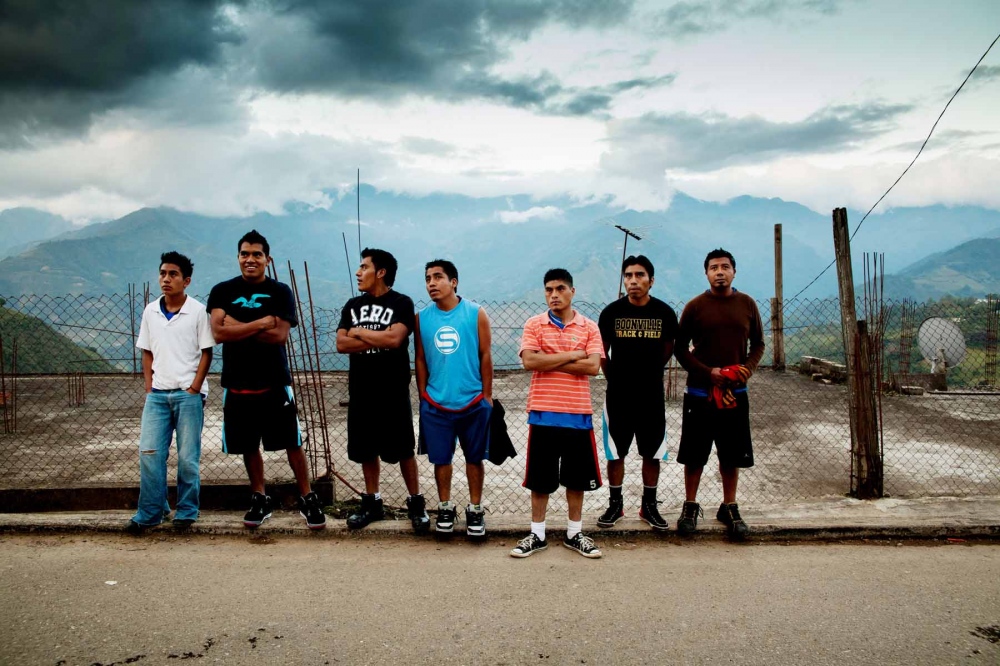 Men await the inauguratory parade of the basketball tournament in San Cristobal Lachiroag. 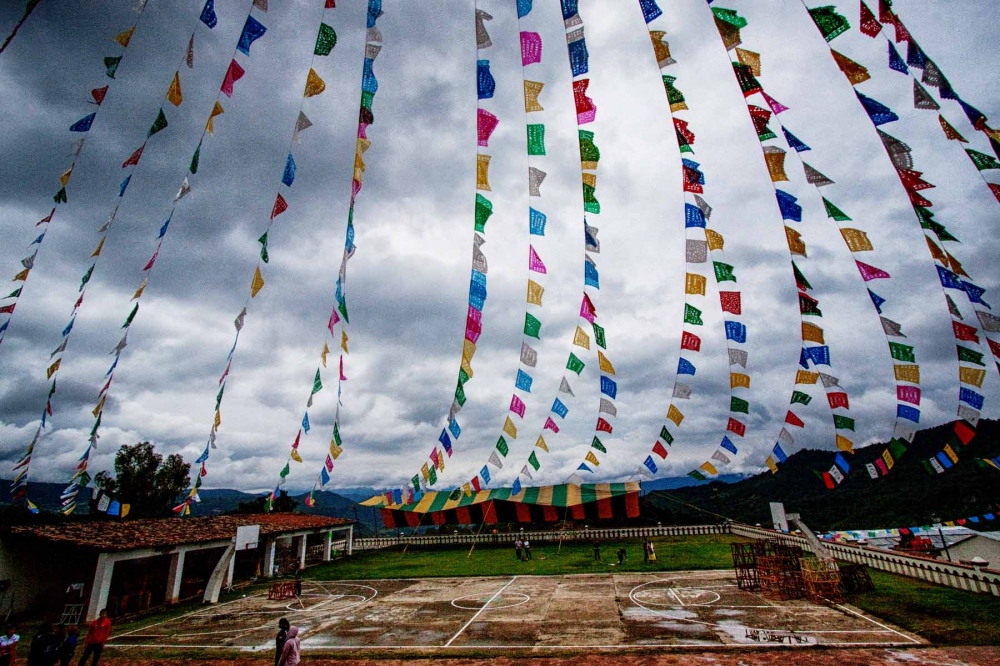 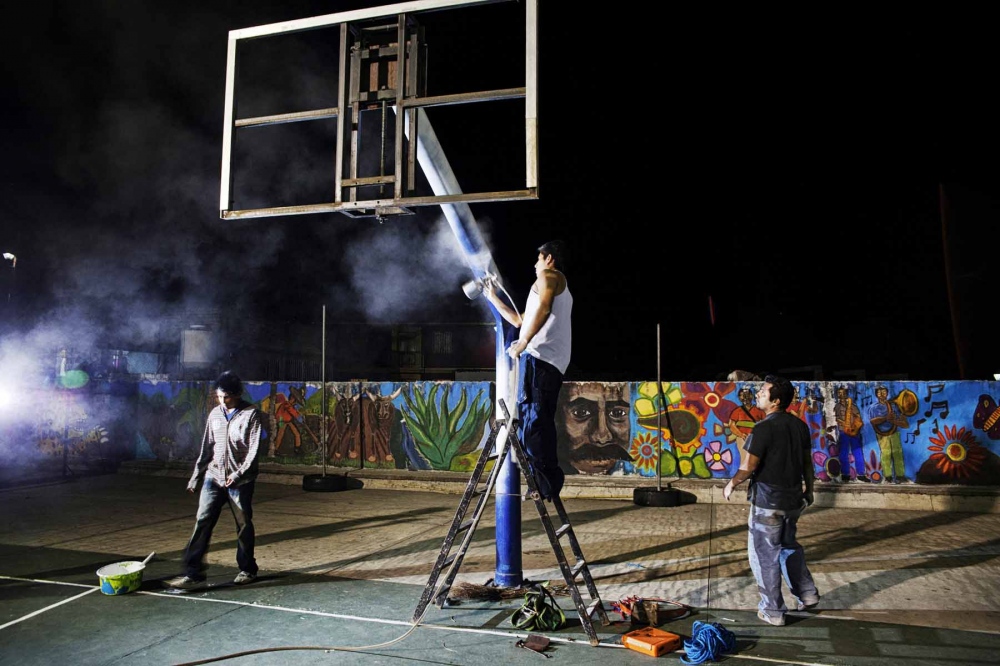 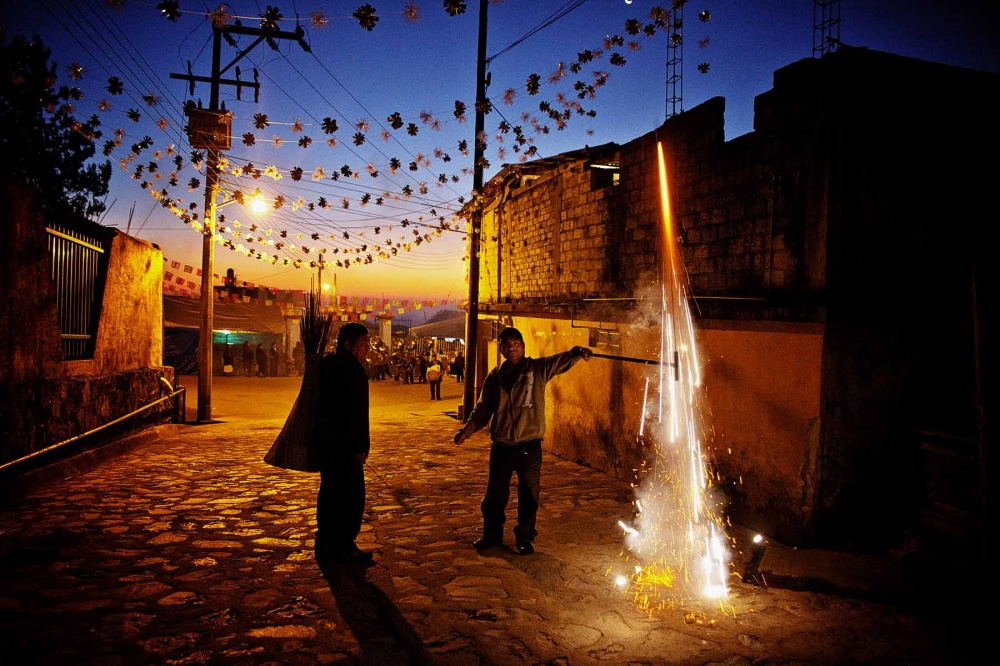 Men set off fireworks before sunrise in the village of Totontepec Mixe as a celebration of the saint's birthday. The men headed a procession of villagers who would carry the saint's image around the village in a ritual parade. 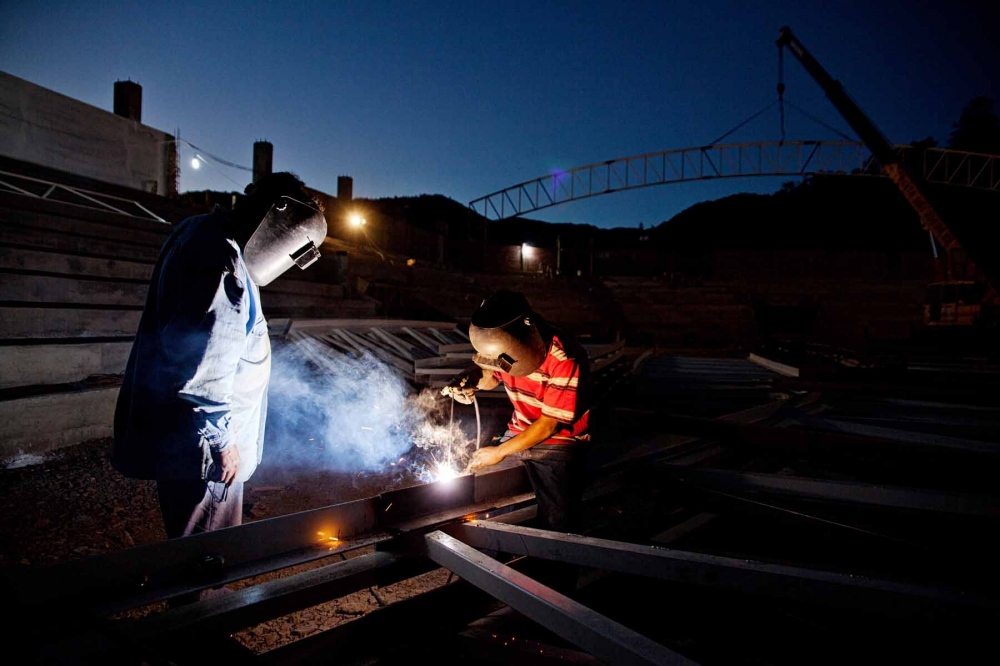 In a photograph taken on December 20th, 2012 men are seen building a new stadium in Guelatao de Juárez, Oaxaca. The stadium cost around 19 million pesos and opened its doors on March 21st, 2013. 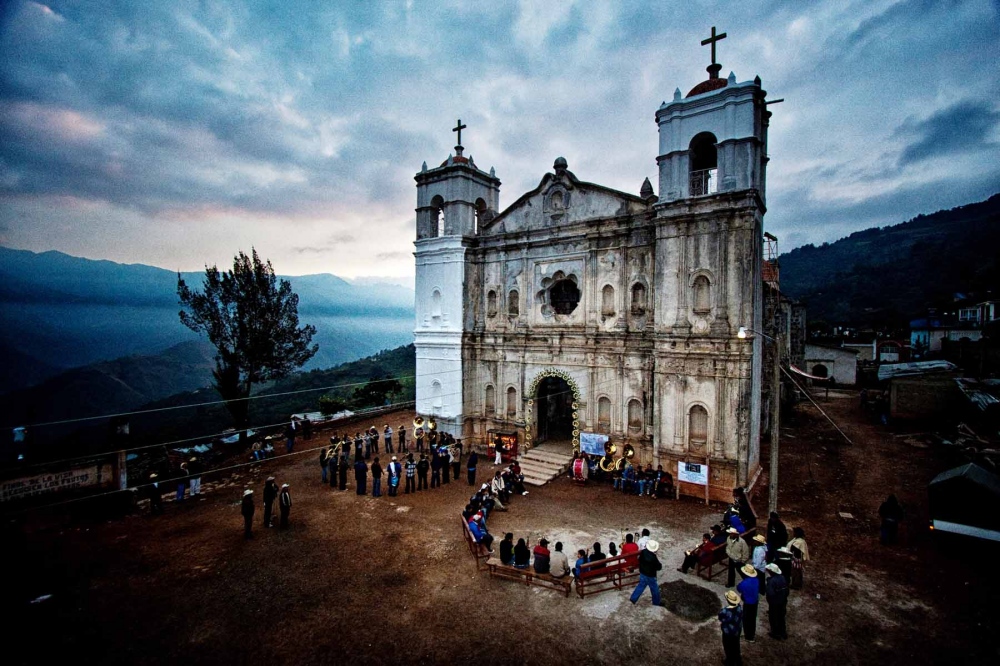 Bands play "Las Mañanitas," a Mexican birthday song, to the saint on the sunrise of his birthday in the village of San Cristobal Lachirioag. 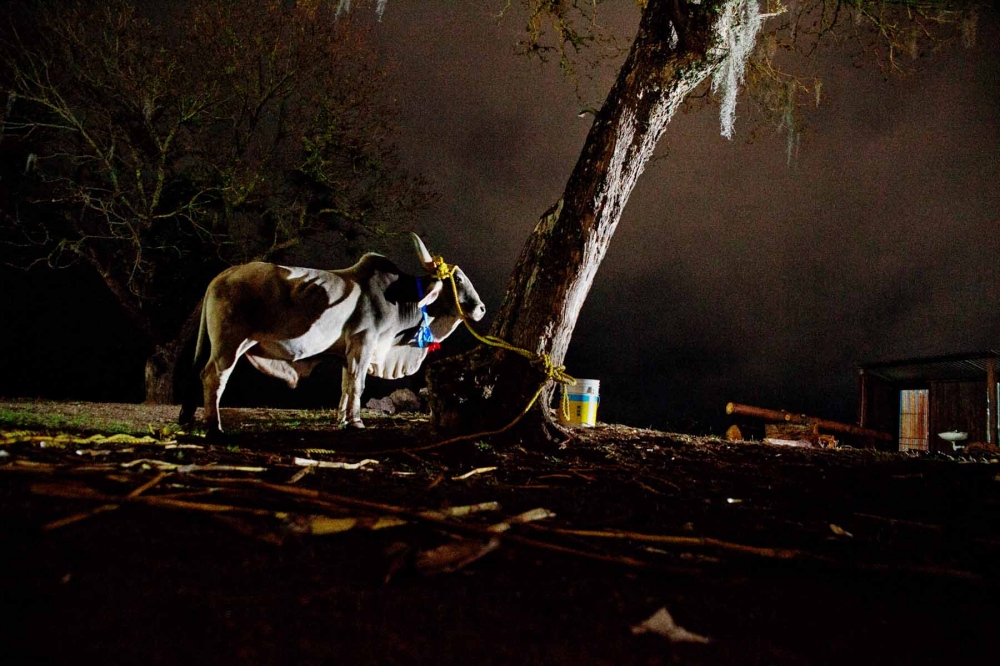 In a photograph taken on February 10th, 2012, a bull donated by a migrant living in L.A. is seen tied behind the church of San Pedro Cajonos. The bull is taken to the church to be blessed before being sacrified to feed the players and visitors at the annual tournament. 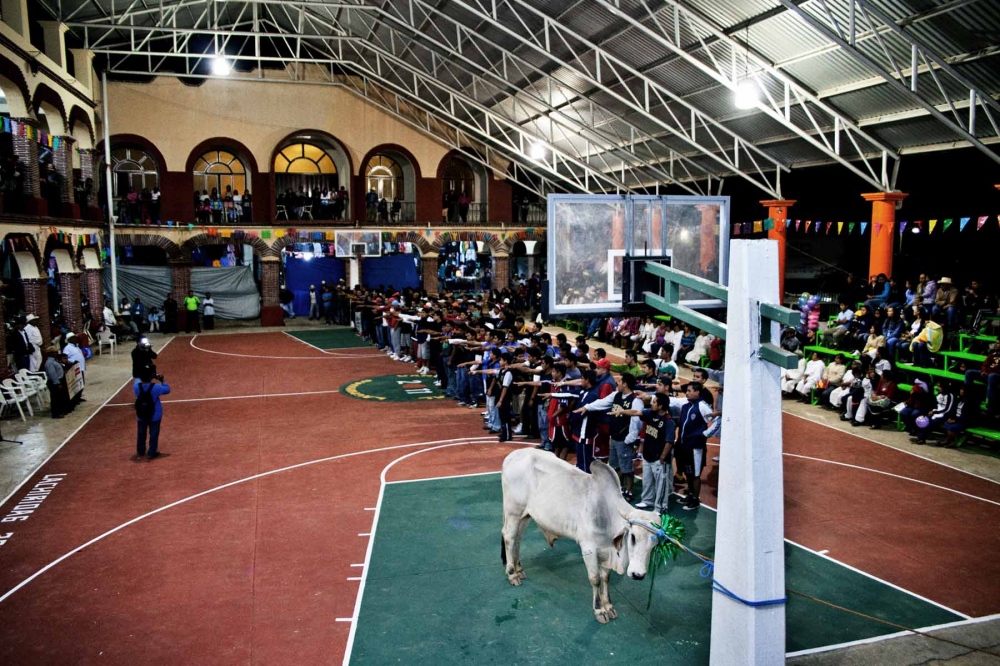 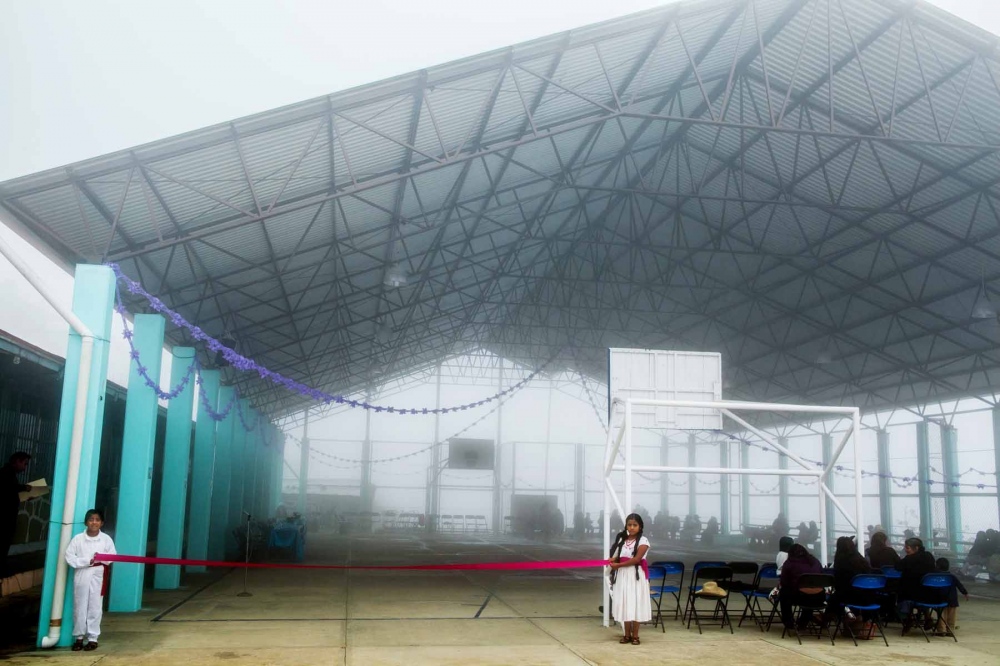 A boy and a girl in traditional Zapotec dress await a ribbon-cutting ceremony in San Pedro Cajonos to celebrate the construction of a new roof over the primary school’s basketball court. The roof was built through Oaxaca’s 3 for 1 program, in which the state goverment matches every migrant dollar sent back for infrastructure projects with three dollars of state funding. Migrants from San Pedro Cajonos had formed a hometown organization in Los Angeles and organized fundraising to build the school’s roof. 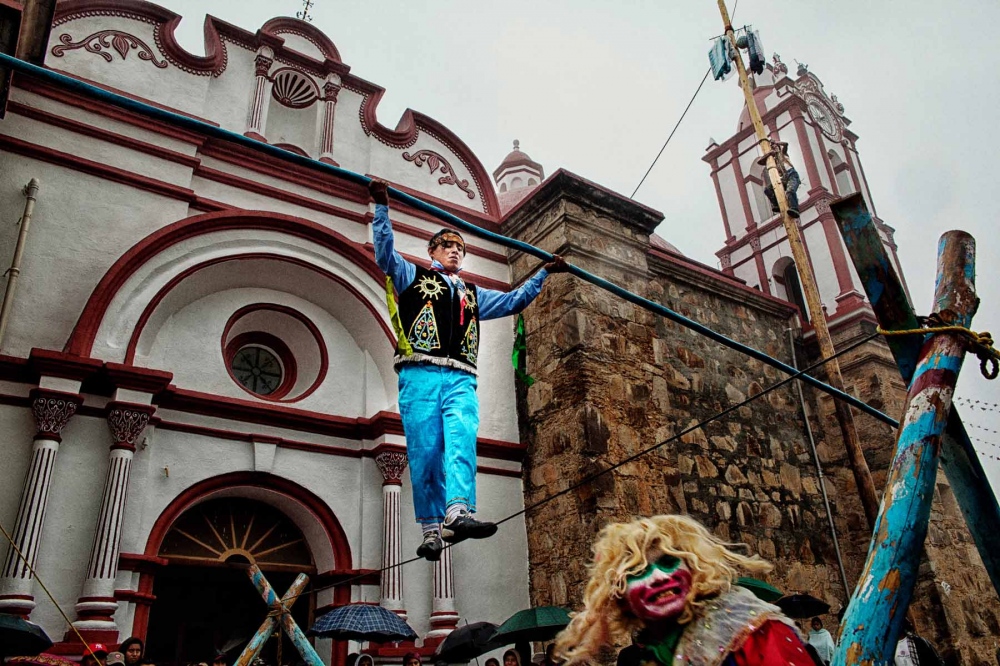 Acrobats perform before the church in Talea de Castro. 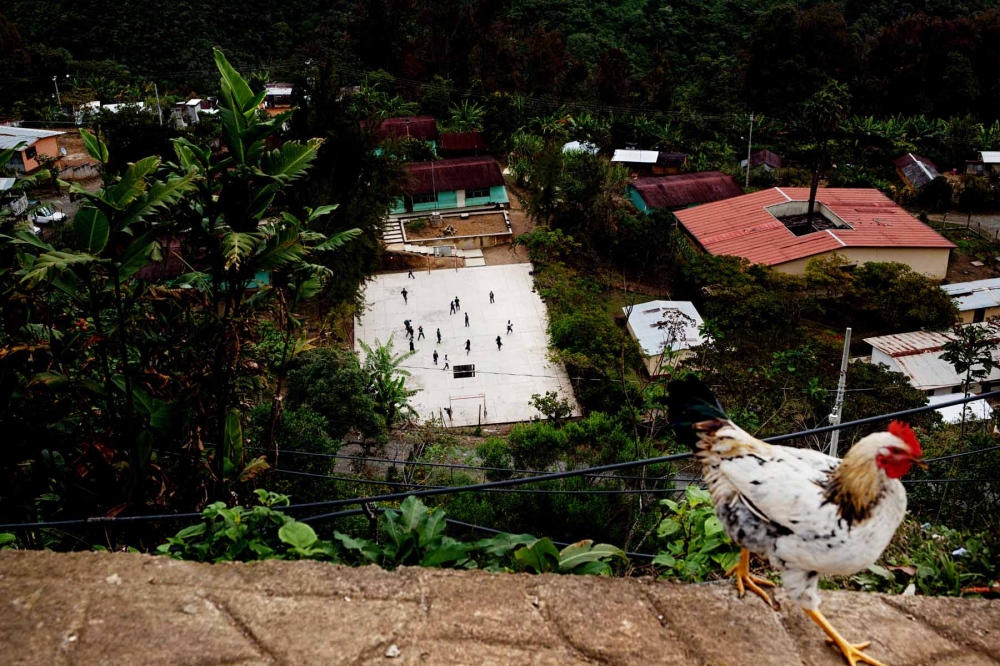 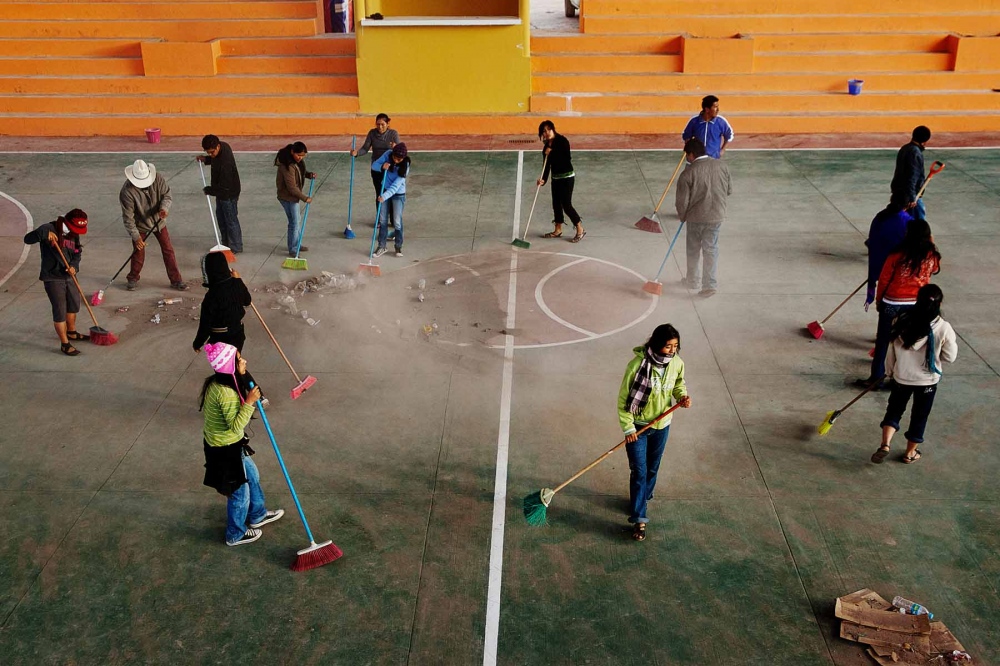 Villagers sweep the basketball court the morning before the tournament as part of a tequio, or obligatory task for all villagers, in Tlahuitotepec. 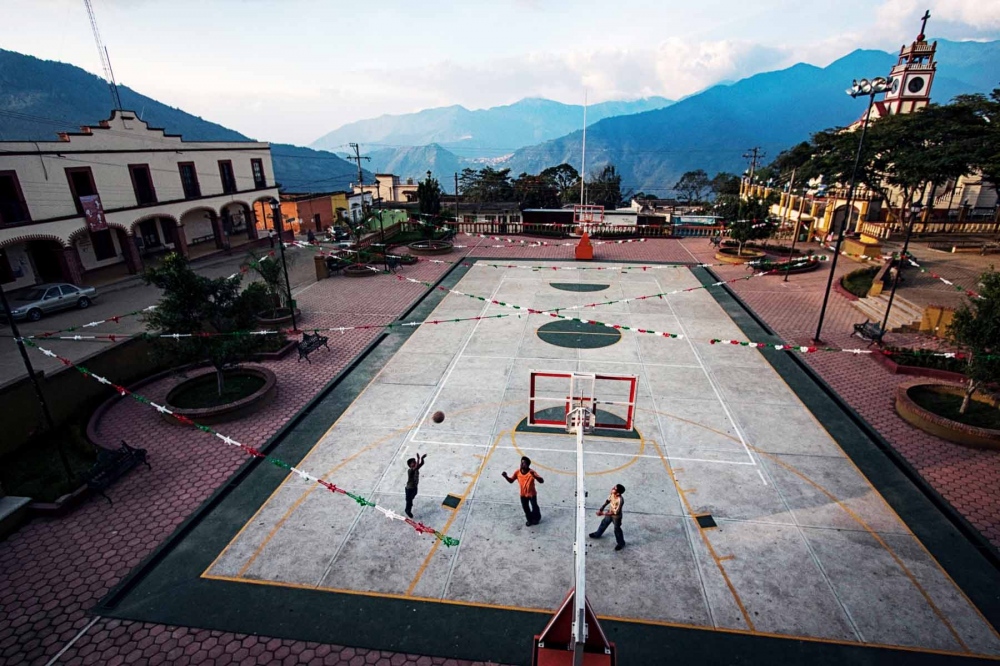 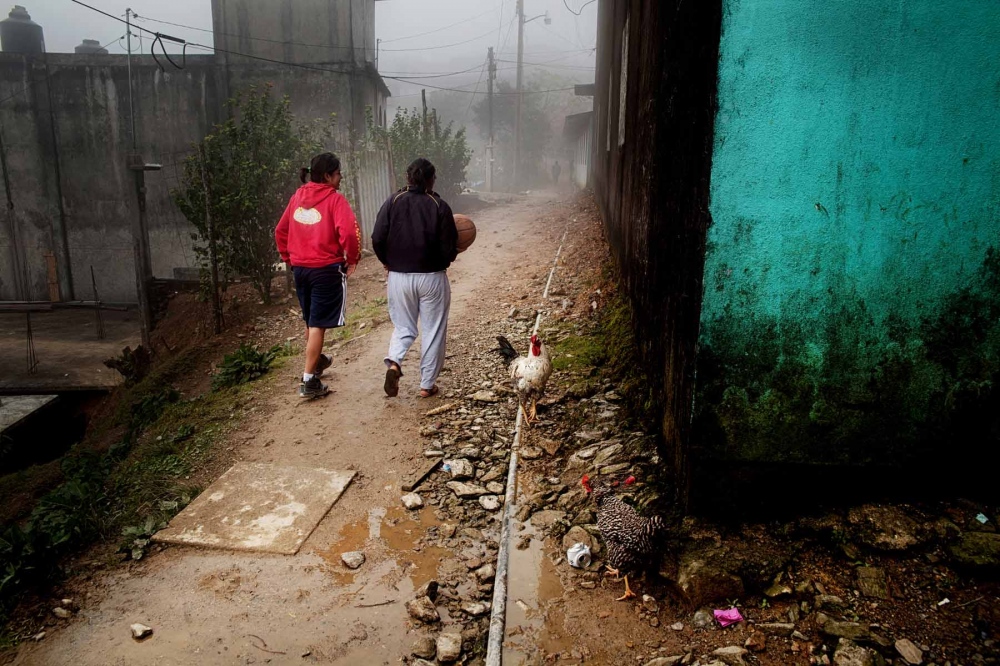 Players from the abejitas team head to the basketball court to compete for Metaltepec's anual village tournament. 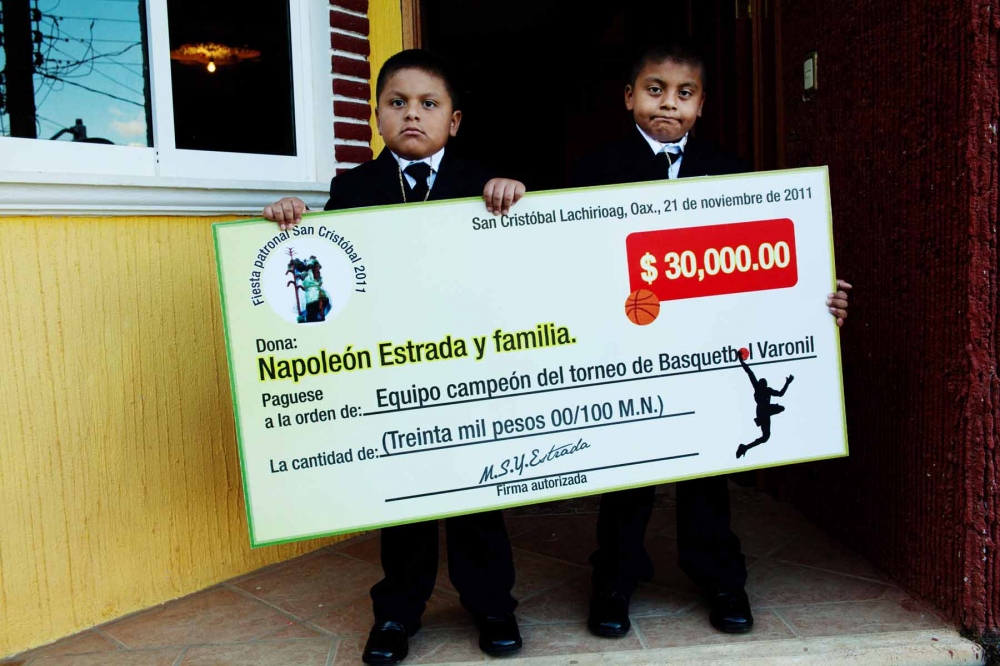 Left, Saul Estrada Pablo, age 4; right, Martin Estrada Pablo, age 6. Both boys are sons of Napoleon Estrada, a migrant living in Escondido, California. The boys are American citizens, but their father is in the U.S. illegally. Afraid of not being able to recross the border if he returned to Mexico, Napoleon Estrada sent his sons- who had never been to Mexico- to award the $30,000 peso prize he was donating for first plaze in the basquetbol tournament. Photo taken in San Cristobal Lachirioag on November 21st, 2011. 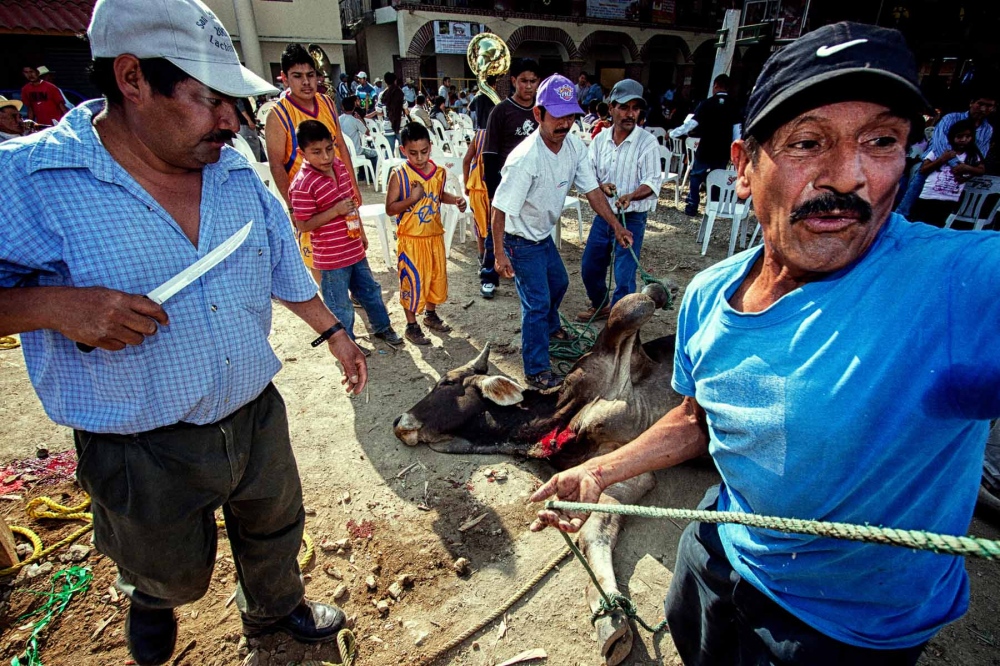 A bull minutes after been slaughtered as an offering of gratitude to the earth for having allowed villagers to construct a basketball court. 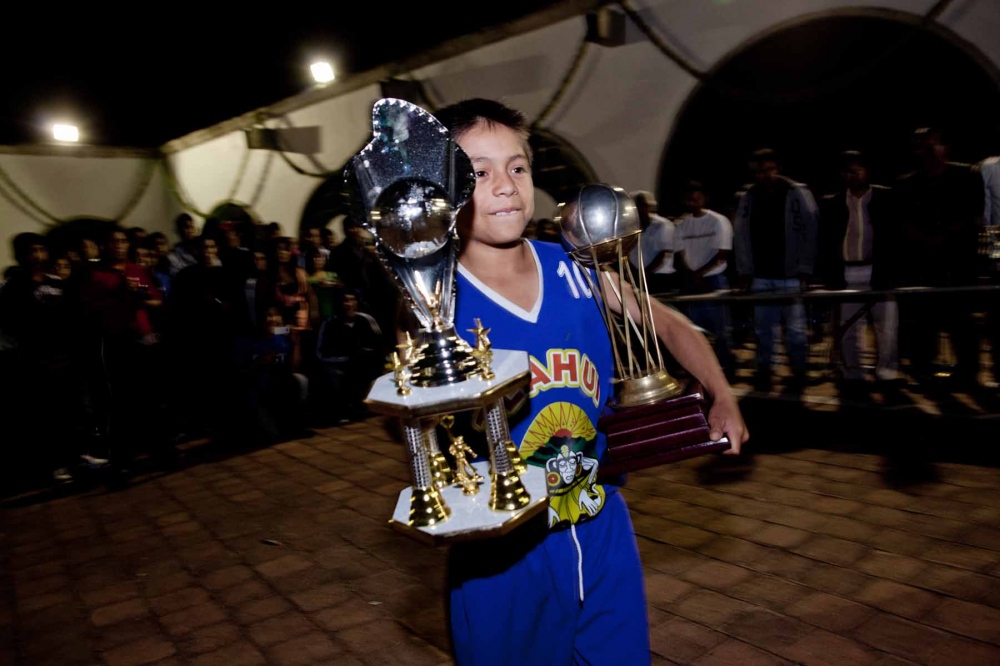 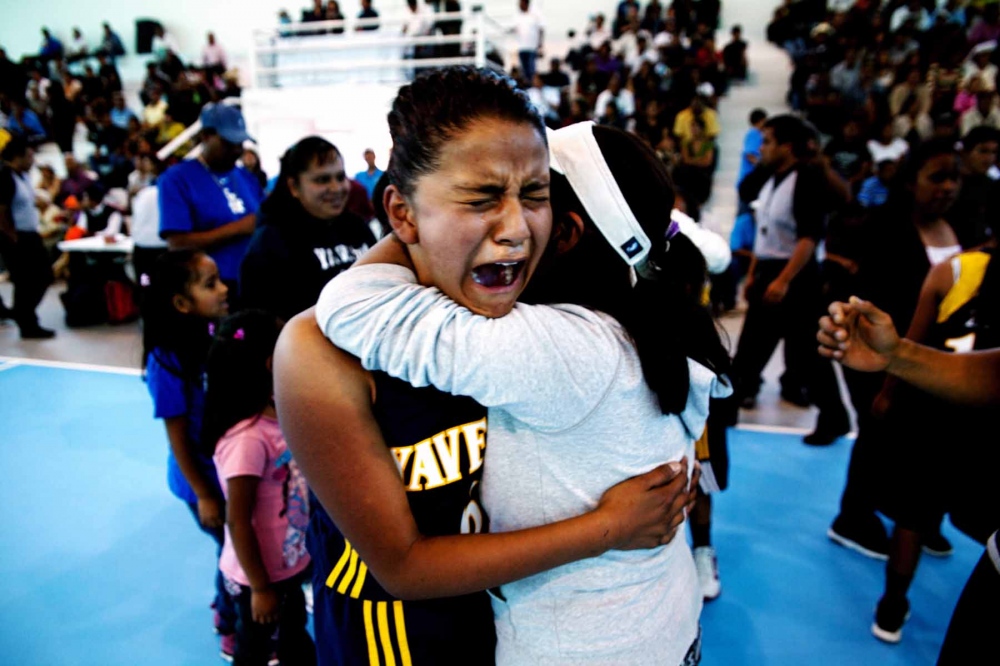 A player from the village of Yavesia, weeps with joy after winning the final game in her category. Guelatao, Oaxaca 2013. 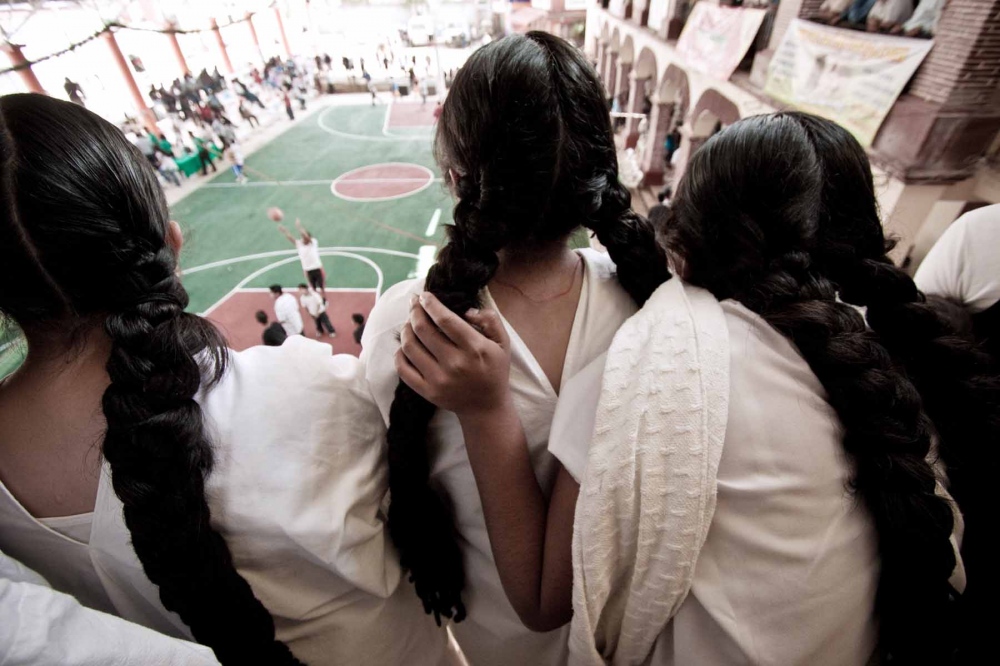 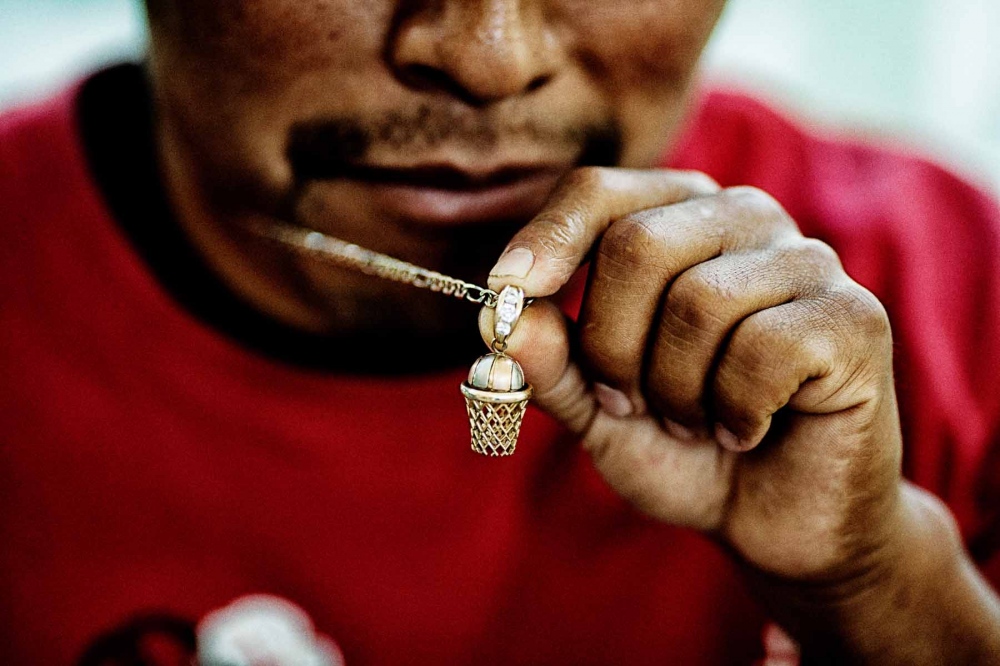 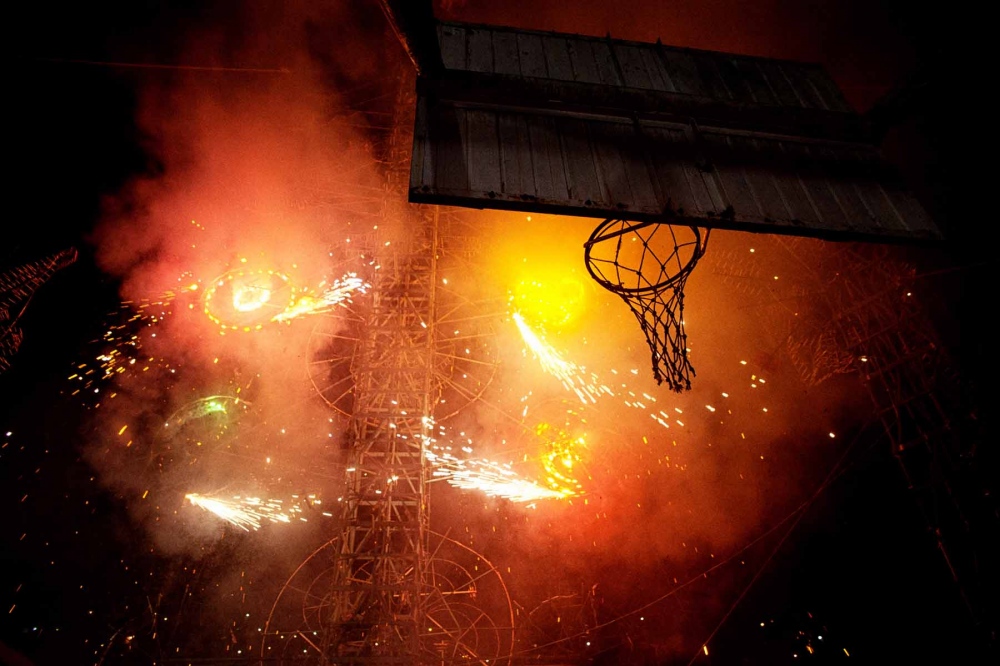 The firework castle explodes on the basketball court in Lachirioag, Oaxaca.  © Jorge Santiago

I grew up in Guelatao de Juárez, a village of approximately 500 people in Oaxaca's Sierra Norte. Guelatao is famous not only as the birthplace of Mexican president Benito Juárez, but also as the site of the annual Copa Benito Juárez, in which more than 200 teams of indigenous Zapotec, Mixe, and Chinantec players compete over a period of three days.

Unlike in wider mestizo Mexico, where soccer reigns supreme, in the Sierra basketball is king. The sport was introduced in the 1930s by president Lazaro Cardenas as a way to bring Oaxaca's disparate and historically rebellious indigenous groups into the national fold. Cardenas' dream of a unified national identity didn't take root in the Sierra, historically isolated and impoverished, but basketball soon became tied to the region's most significant traditions, and to indigenous identity itself.

Like many of my fellow villagers, I grew up idolizing the star players from my village and others, saving up money for basketball shoes, and spending most of my spare time on the basketball court which, as one of the few flat spaces in hilly and terraced Serrano villages, served not only as a site of play but also as a public gathering space.

My documentary photography project explores the way in which basketball reinforces indigenous identity. Basketball tournaments are the central fixture of the annual village fiesta, the single most important event in a Serrano village. In the past, migrants would return from the United States for tournaments in their villages; now, with changes in U.S. border policy, they simply send money for trophies, slaughtered bulls, fireworks, uniforms, shoes, and prizes. During the fiesta, the basketball court is the fulcrum of activity: bulls are slaughtered there, bands play in massive group concerts, dances are held, and the names of the migrants sponsoring the fiesta are read aloud.

By Jorge Santiago — How does a human being, or an animal, become God? Through the spontaneous will of self-sacrifice, or through suffering. -Dominique Fournier..
Apr 14, 2019

By Jorge Santiago — American basketball players come to Mexico to compete in basketball tournaments in small villages around the country. It is their last shot at..
Apr 14, 2019

By Jorge Santiago — In the first year of a baby’s life, her family’s boundaries blur. If before the mother and father were discrete entities, now they run together,..
Aug 30, 2017