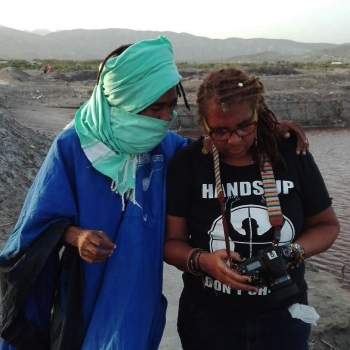 Sokari Ekine, Photography Sokari Ekine, Black Looks Blog Sokari is a Nigerian British visual scholar, writer, and activist.  She has lived and worked in Africa, Europe, the Caribbean, and the US.  Her work focuses on... read on
sokariekine.me


Sokari is a Nigerian British visual scholar, writer, and activist.  She has lived and worked in Africa, Europe, the Caribbean, and the US.  Her work focuses on decolonization, sexuality and sexual rights, spirituality,  and self-determination.   In 2004 Sokari was one of the first African women to create an online blog, Black looks,  now a foundational site which at its center documents African queer subjectivities and forms of intersectional activism.

Since 2007, Sokari has spent months at a time in Haiti as a community organizer, educator, writer, and most recently a documentary photographer. In 2013 she received a twelve-month  International Reporting Project fellowship from John Hopkins reporting on grassroots healthcare provision.   It was during this time she began her journey as an intentional photographer and visual scholar.  Her lived experiences with spiritual communities in Haiti have produced a series of photo essays focusing on African Diasporic spirituality in Haitian Vodoun which are highlighted in a recently published book, Spirit Desire.  Her work on changing negative stereotypes and narratives of African Spirituality continues in Kenya and most recently amongst queer and trans-identified people of color in the United States.

Her work has been exhibited in New Orleans, New York, Miami, and Bahia.


Thanks for taking the time to read this and please consider supporting my work through Patreon site here..... Patron!Sustainer