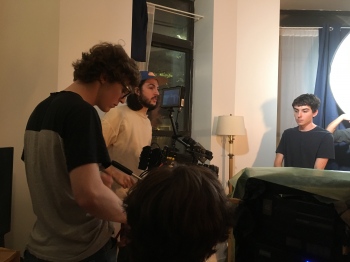 Filmmaker, Writer & Director @ Film and Television at NYU Tisch School of the Arts

Zach is a filmmaker attending at NYU Tisch.      As a freshman, Zach directed an episode of the college TV miniseries CON which was nominated for best drama by the College TV Emmys. His short film, Didn’t Seem So... read on
Location: New York
Focus: Filmmaker, Director, Writer
About

Languages Spoken: English
Years of experience: 3 to 5
Zach is a filmmaker attending at NYU Tisch.

Zach has also written and produced several projects including, 101 Ways to Get Rejected, which made it to the front page of Funny or Die, two sketches and a music-video (co-wrote and produced) for Jack Kennedy which combined have over a million views on youtube.