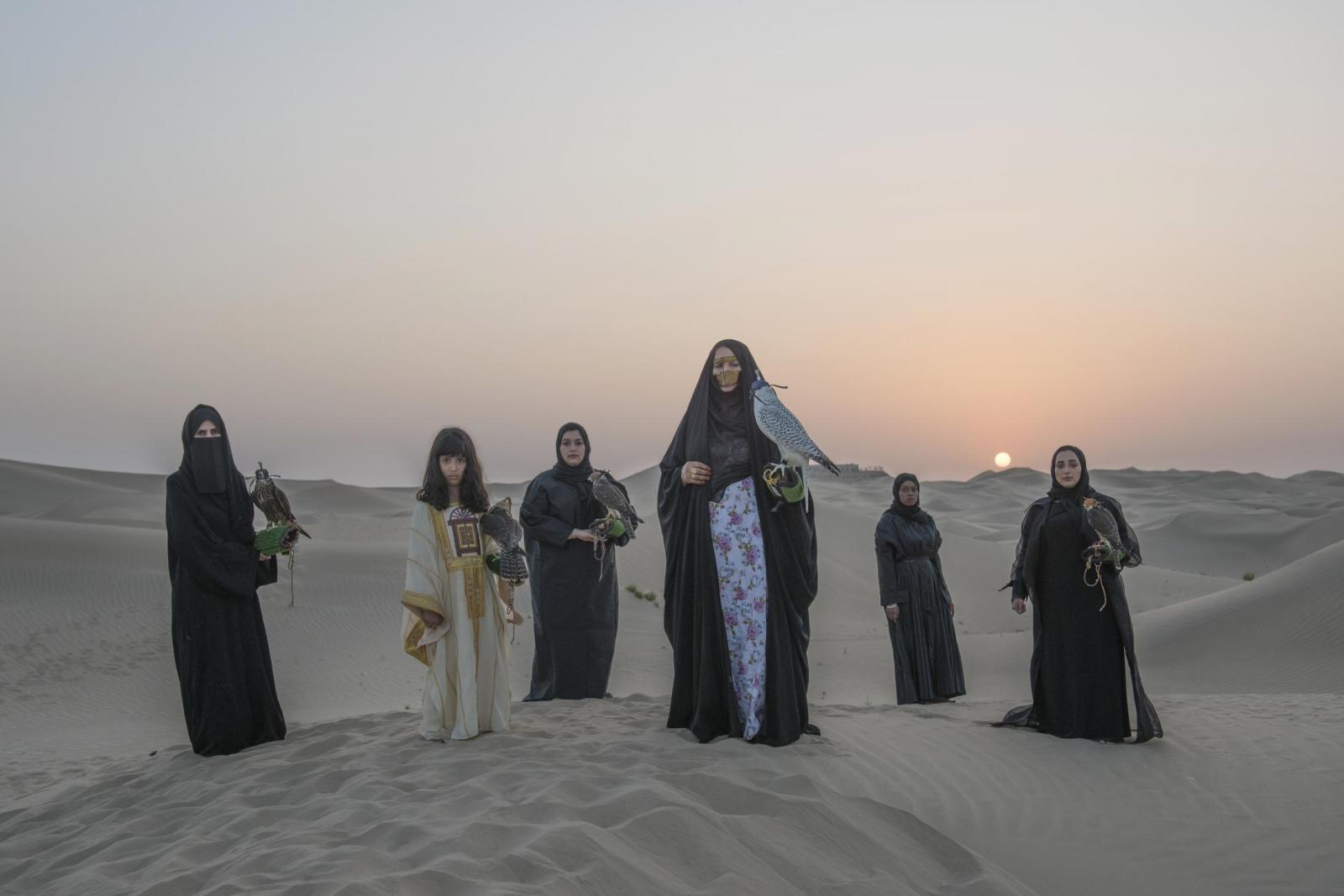 Emirati women are ­"pushing the boundaries to break stereotypes"
Many women are not practicing falconry in the Middle East, these are few Emirati female falconers from UAE are indications of the boldness, initiative, and independence of Arab women. Perhaps the falcons were a symbol to these women of limitless freedom, as well as of power at Abu Dhabi, UAE 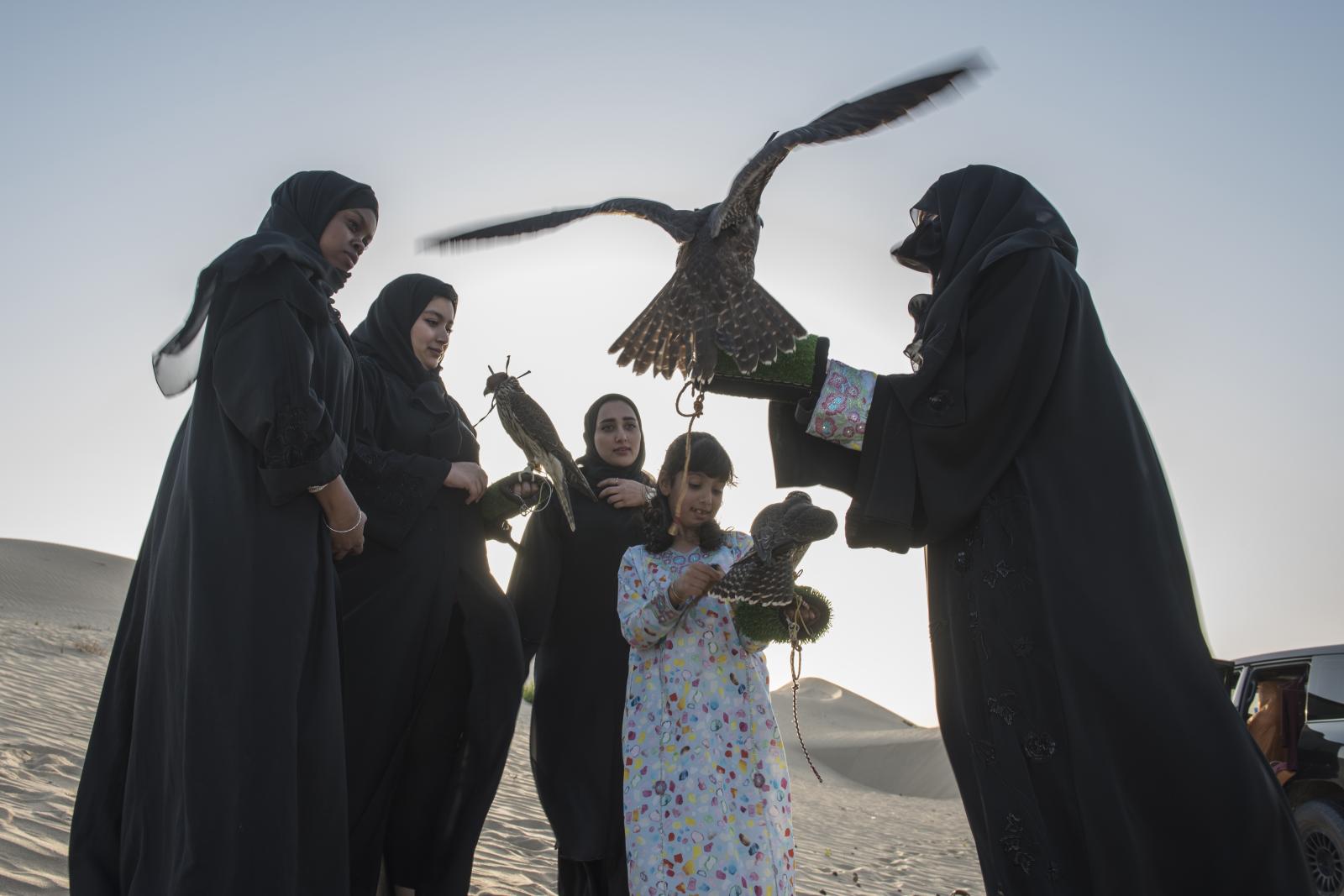 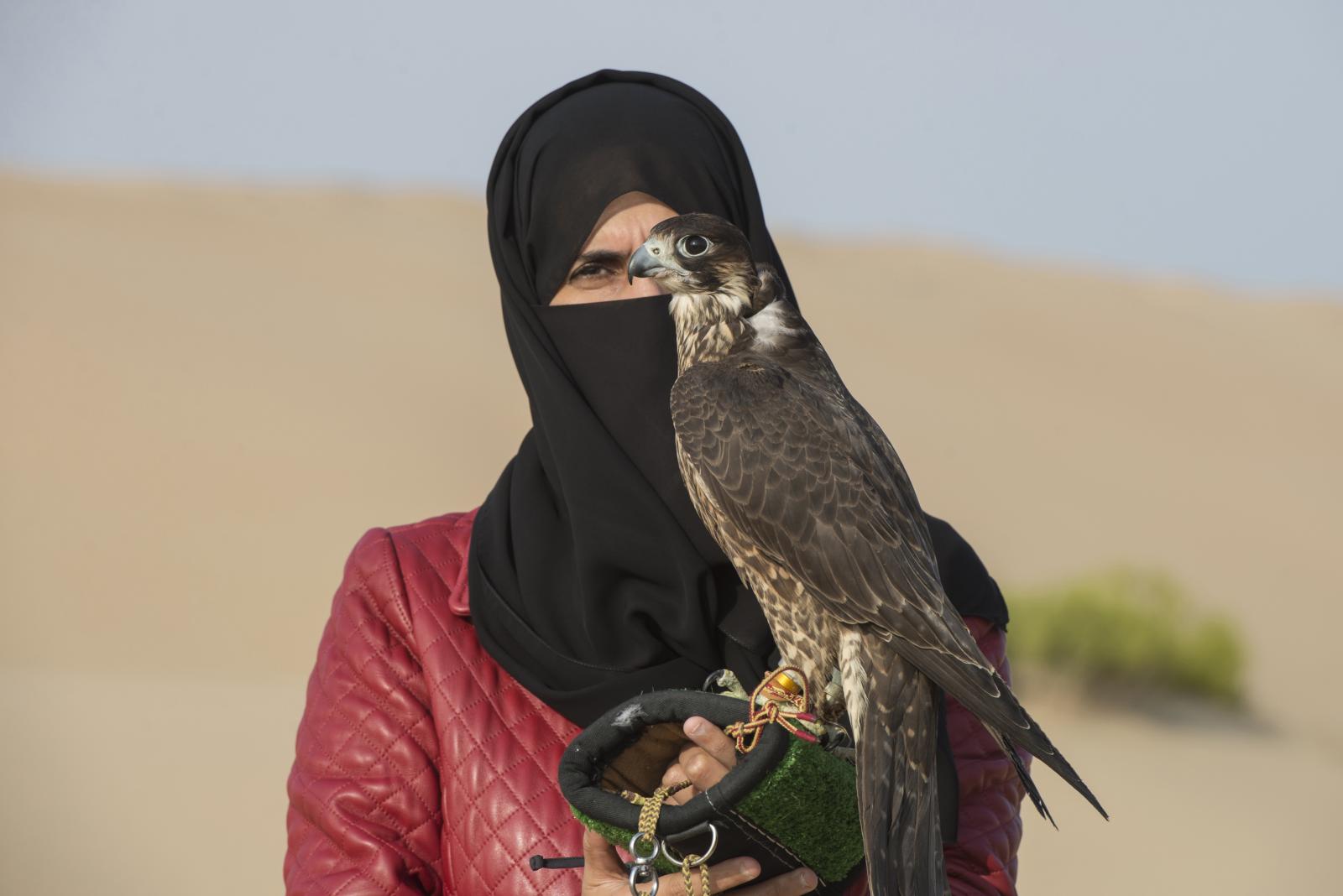 Ayesha Al Mansoori is the head trainer at the Abu Dhabi Falcon Club. In 2017, she began offering free falconry classes for women and within a year, more than 50 women had signed up. Al Mansoori says that Emiratis do not need modern gadgets like binoculars to trace their birds during hunting session: 'Our DNA is all about the desert and falcons.' 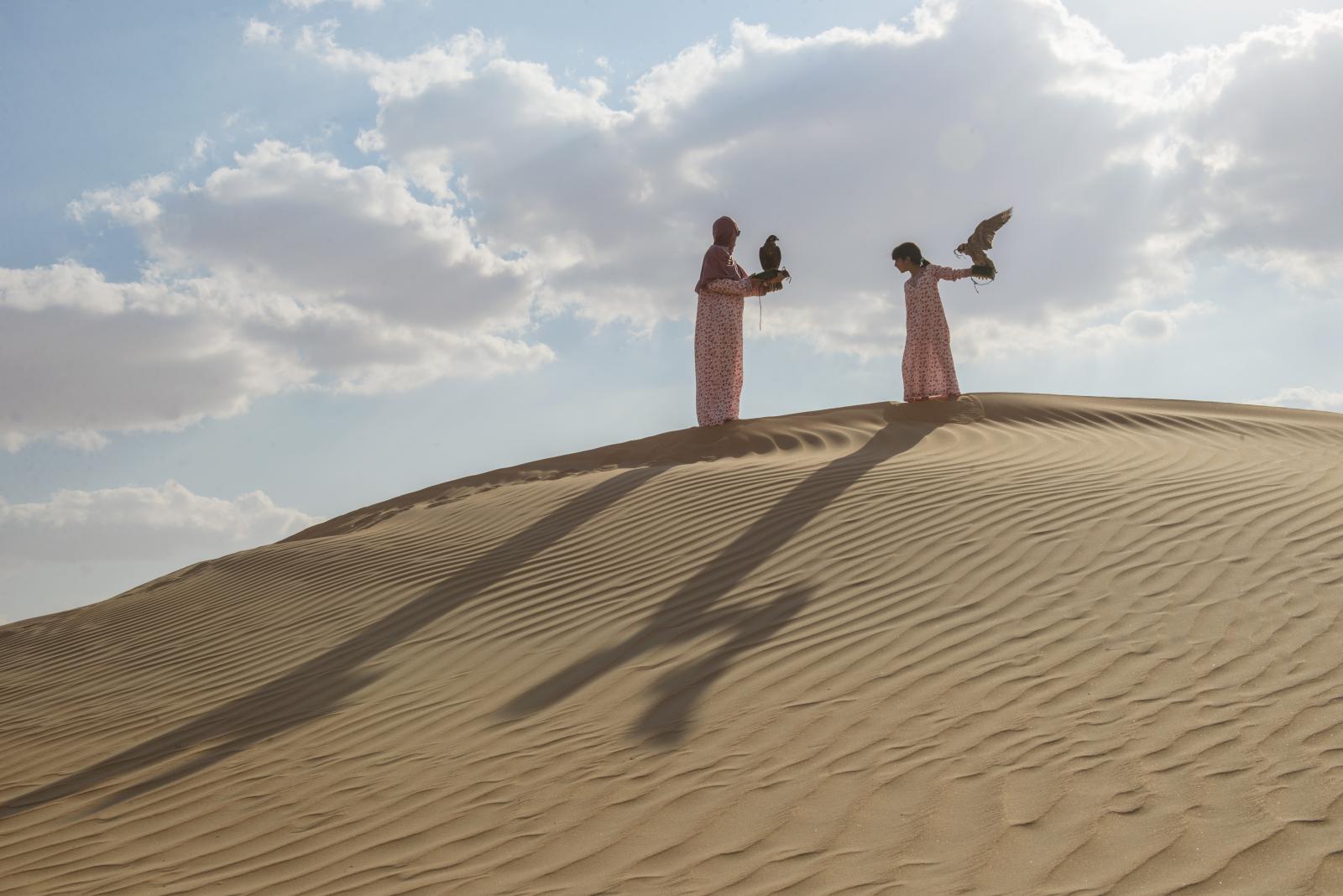 Ayesha Al Mansoori, left, began learning falconry from her father at the age of 4. Now she is passing that knowledge on to her daughter. 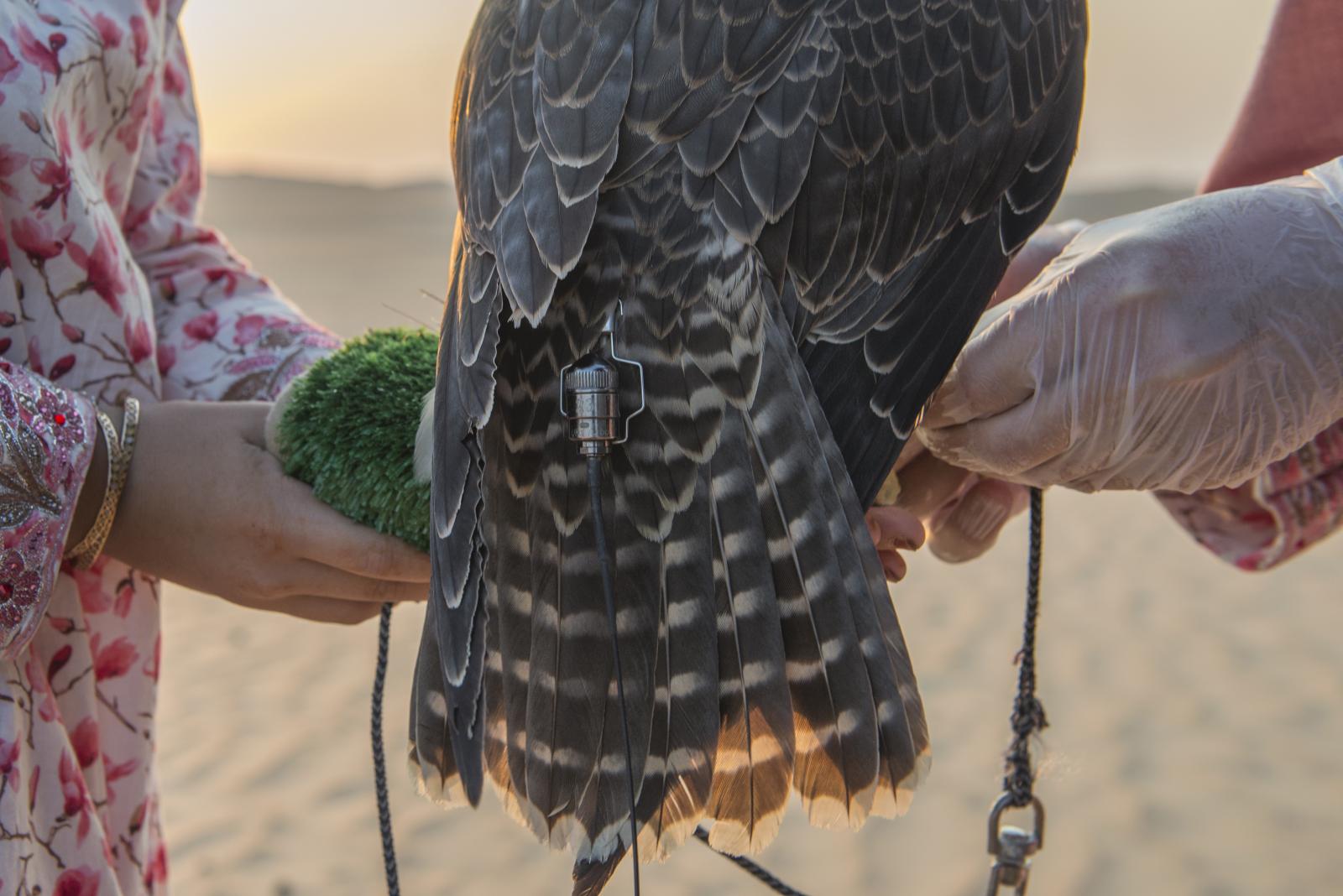 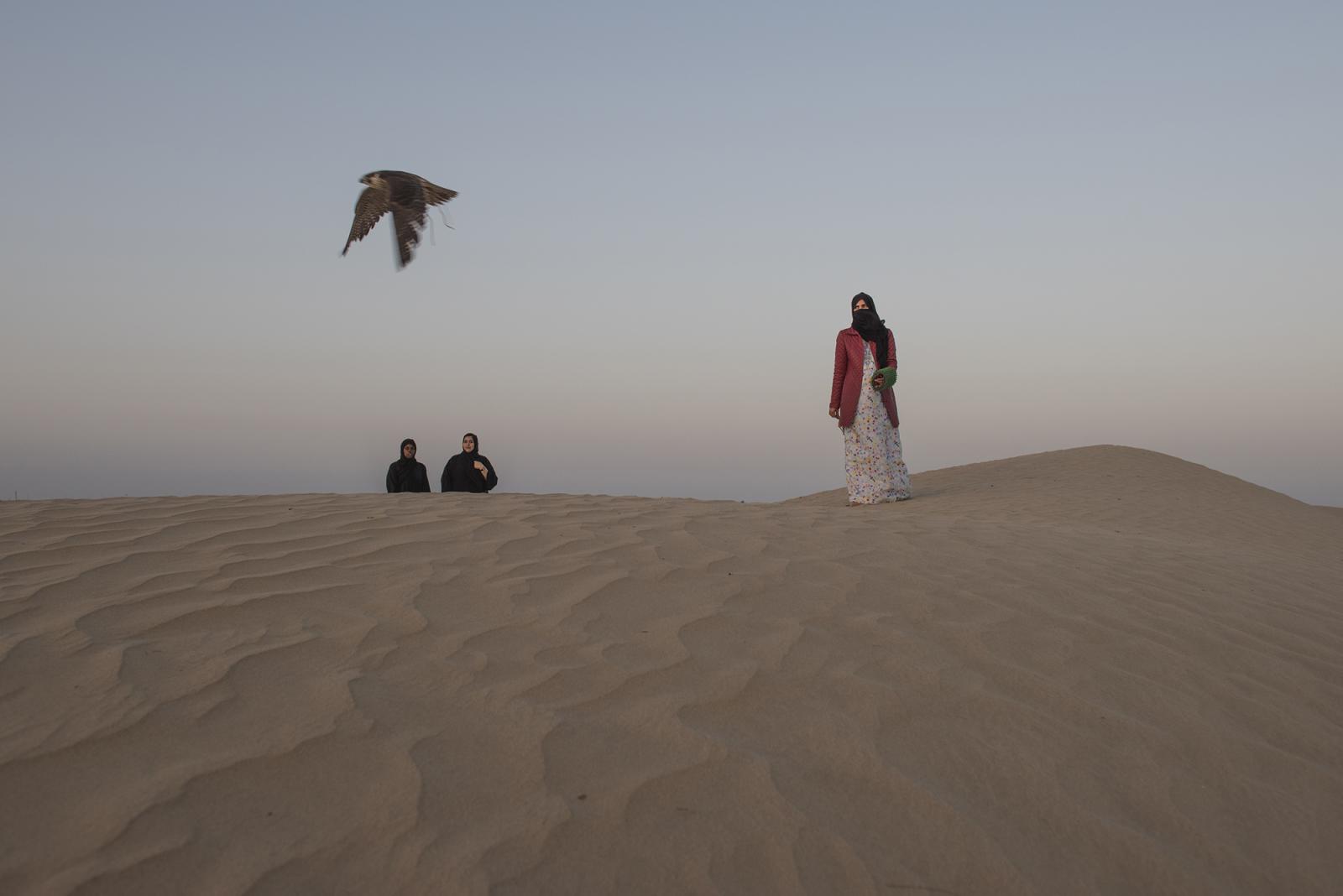 6 of 20 © 2021 Vidhyaa C
For The National
Ayesha with her students release her female (Shahin) falcon named as Gseewra , prepare to be ready to hunt and train the bird and return to her . 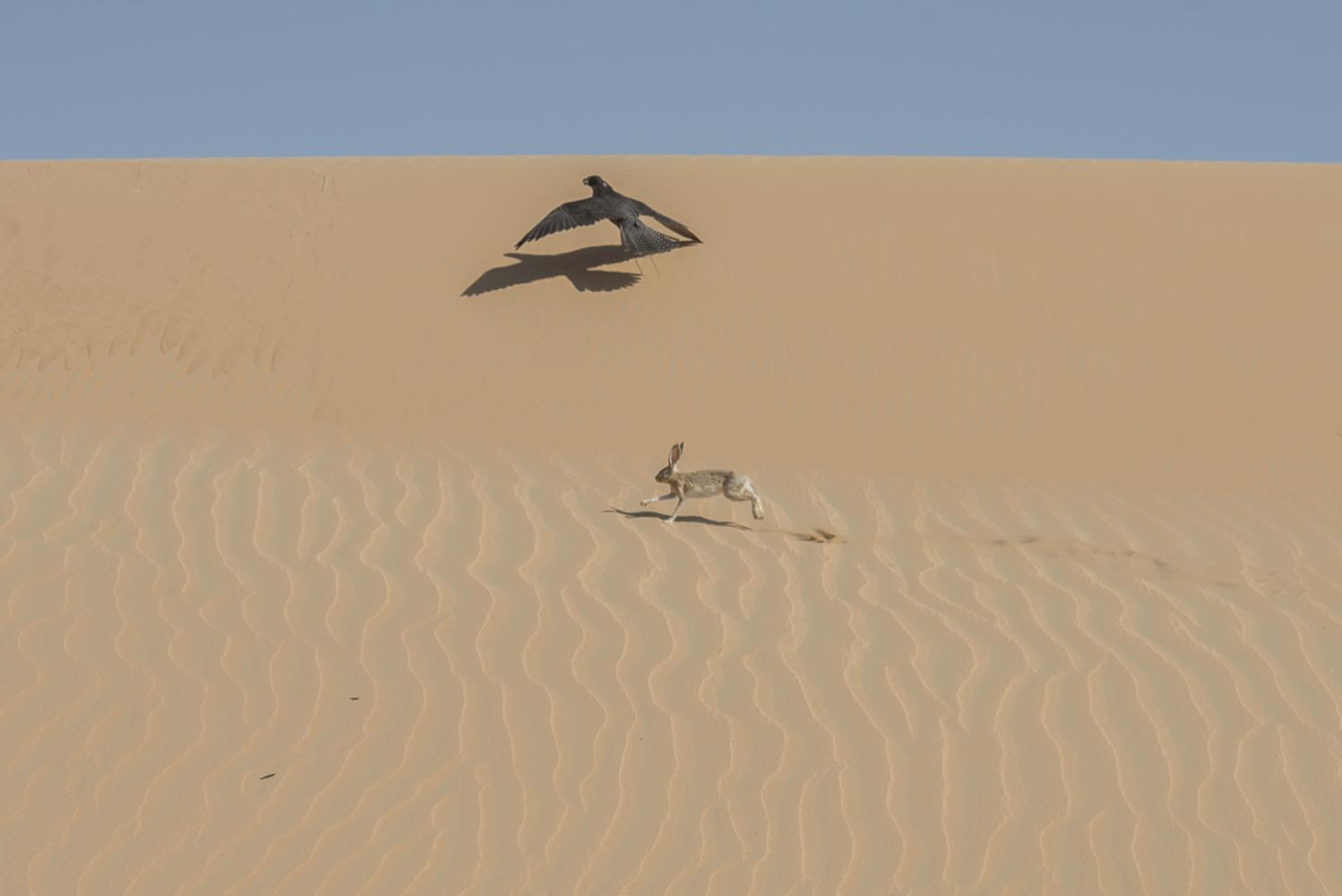 Falconry has historically been a popular pastime in the UAE 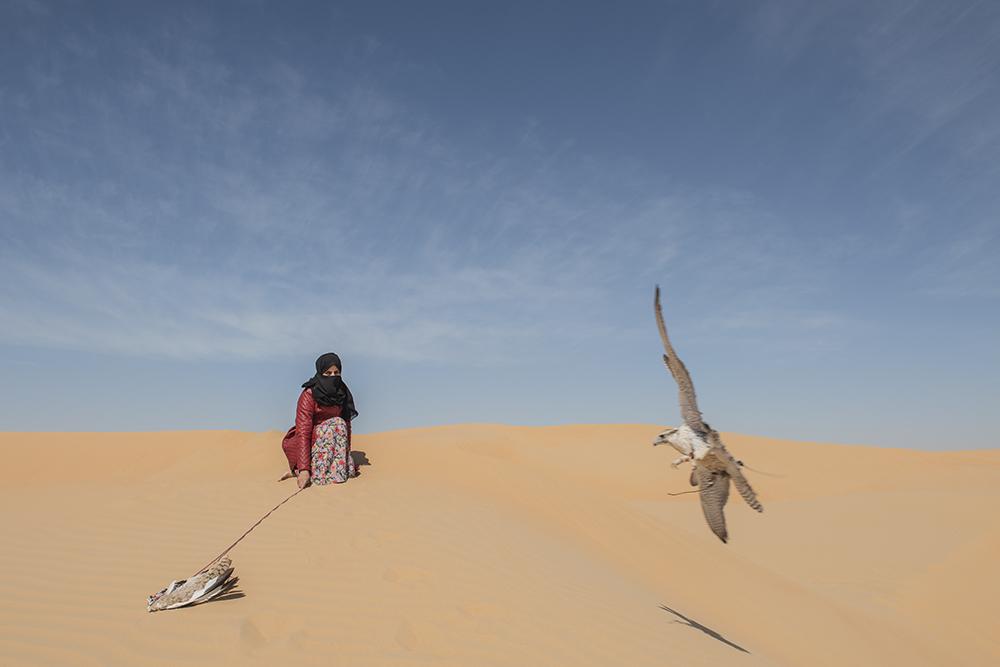 Traditionally a way of obtaining food, falconry today has become more of a national sport and a rite of passage for many young Emirati girls and women’s, who take their time to train their falcons, developing a relationship and deep bond with the birds, happy to see these women are practicing falconry and things are changing in the UAE, at Abu Dhabi,UAE 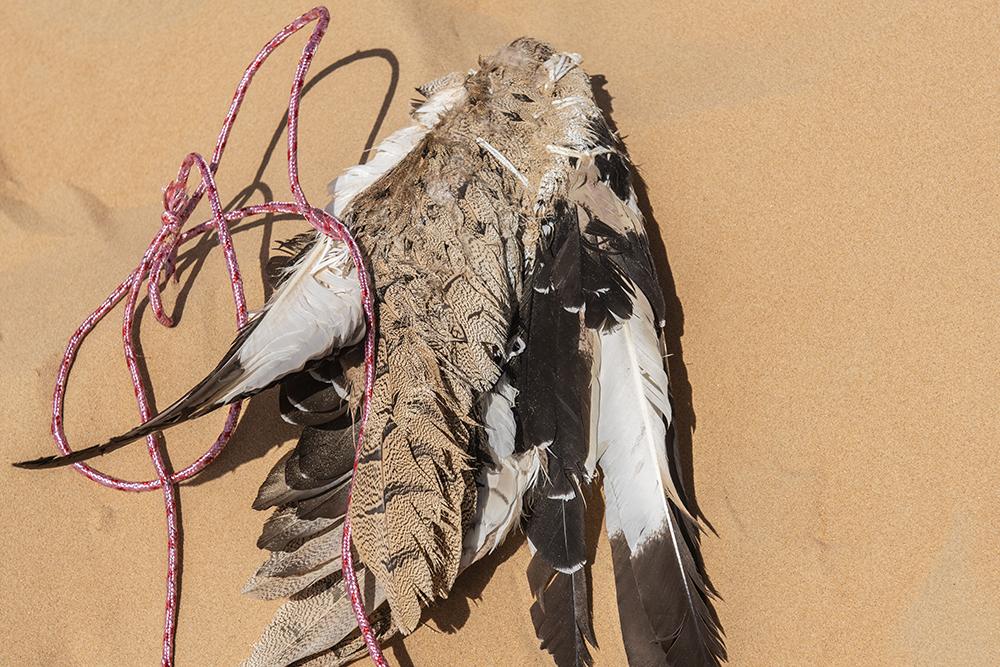 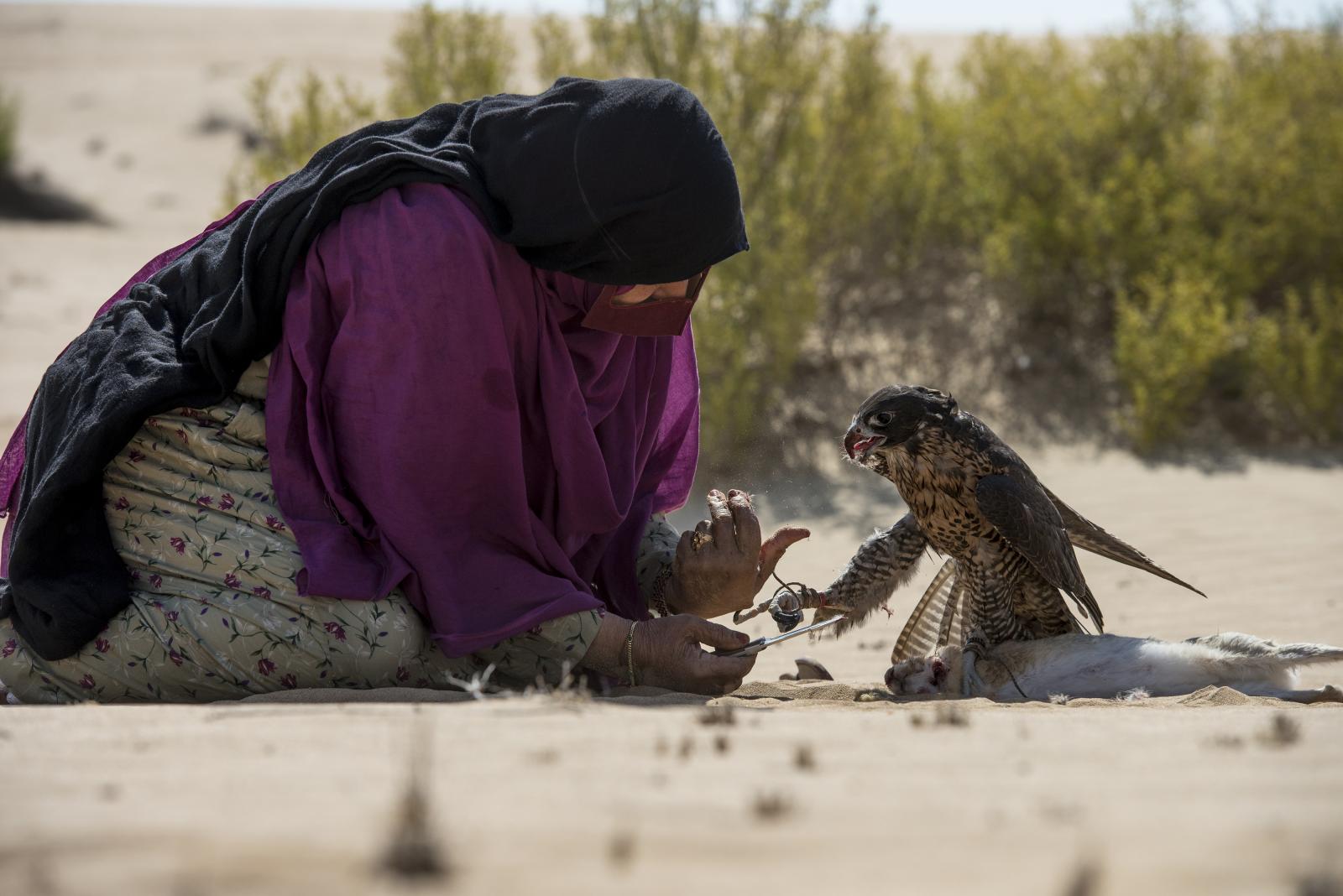 Afrah with her falcon during a rabbit hunt. Falconry is a multi-million-dirham industry. Like camel racing, women have traditionally been almost completely absent from this heritage sport, but things are changing in the UAE. 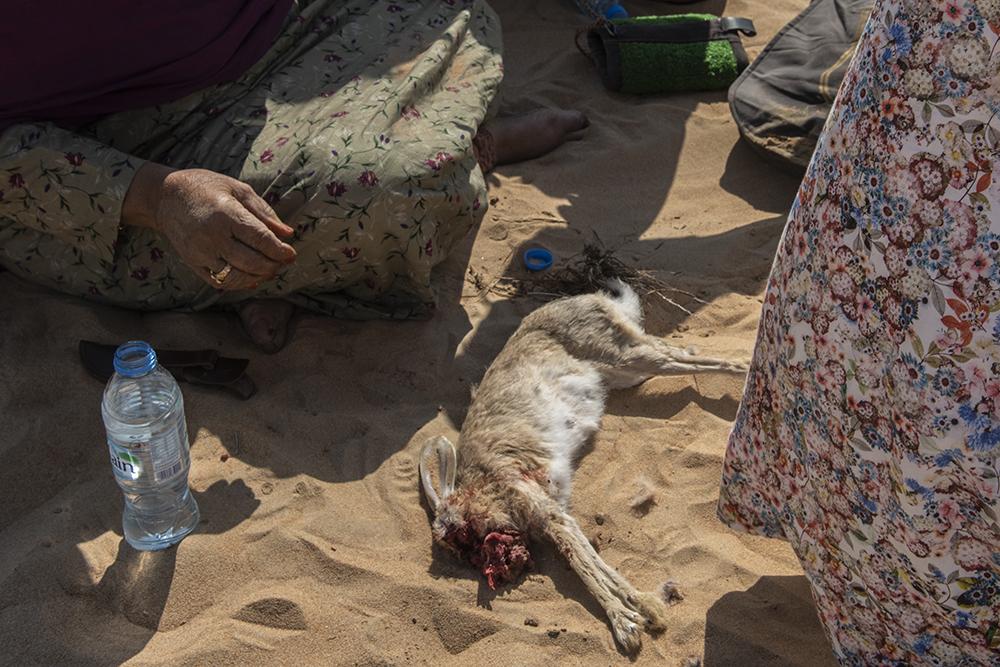 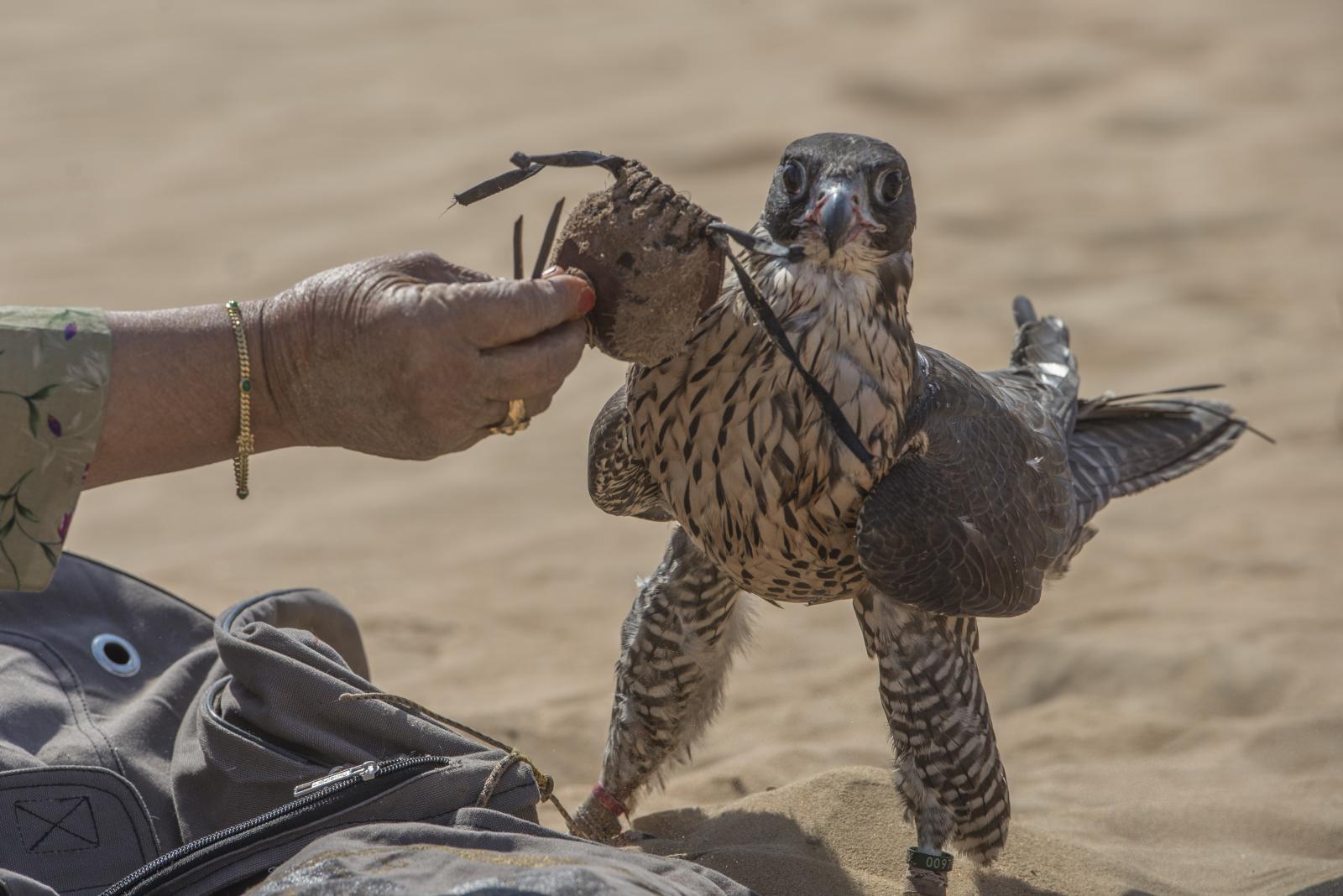 12 of 20 © 2021 Vidhyaa C
For The National
Hooding the Falcon
A female falconer hoods her bird after a hunt. This keeps the falcon calm and focused at Abu Dhabi,UAE 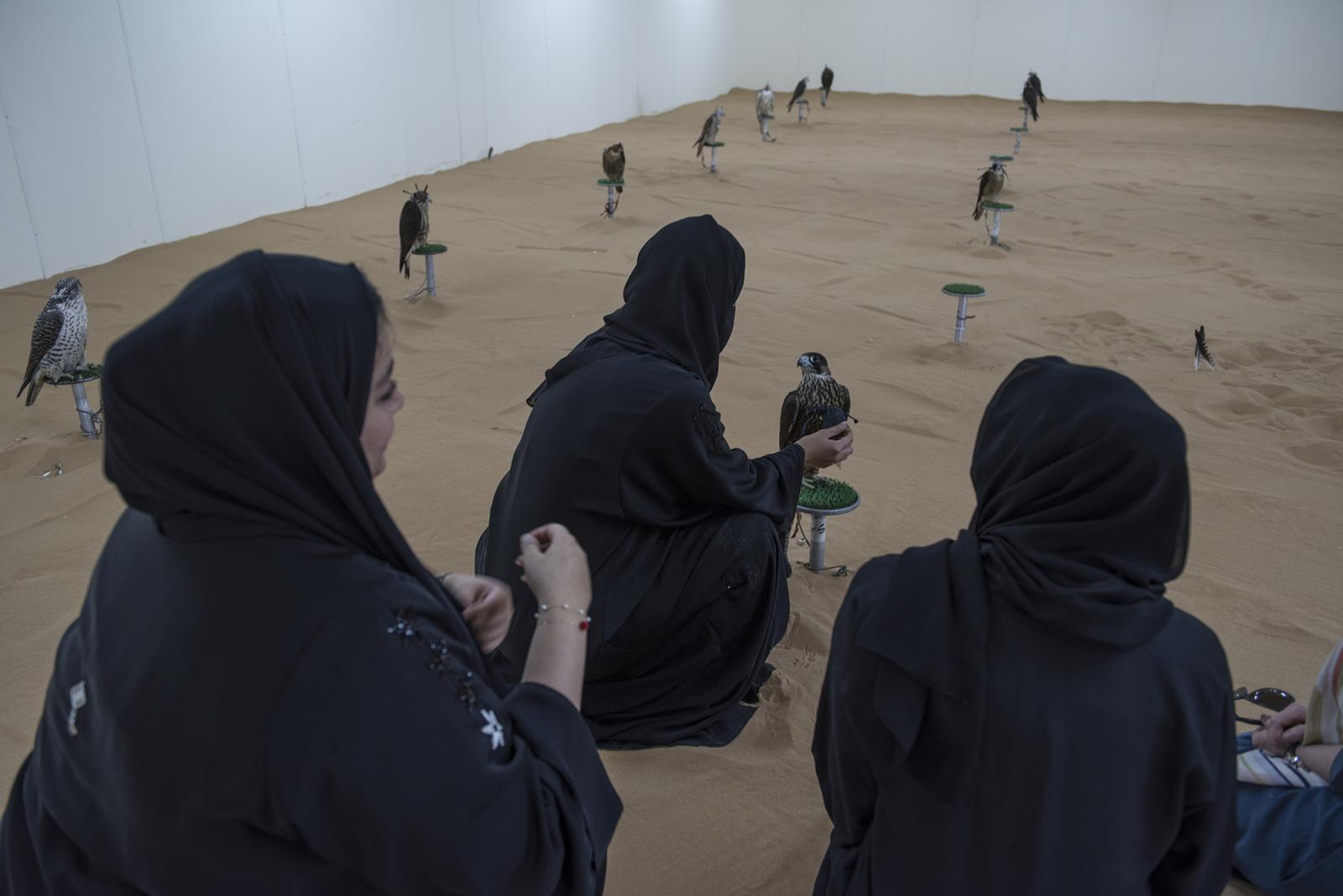 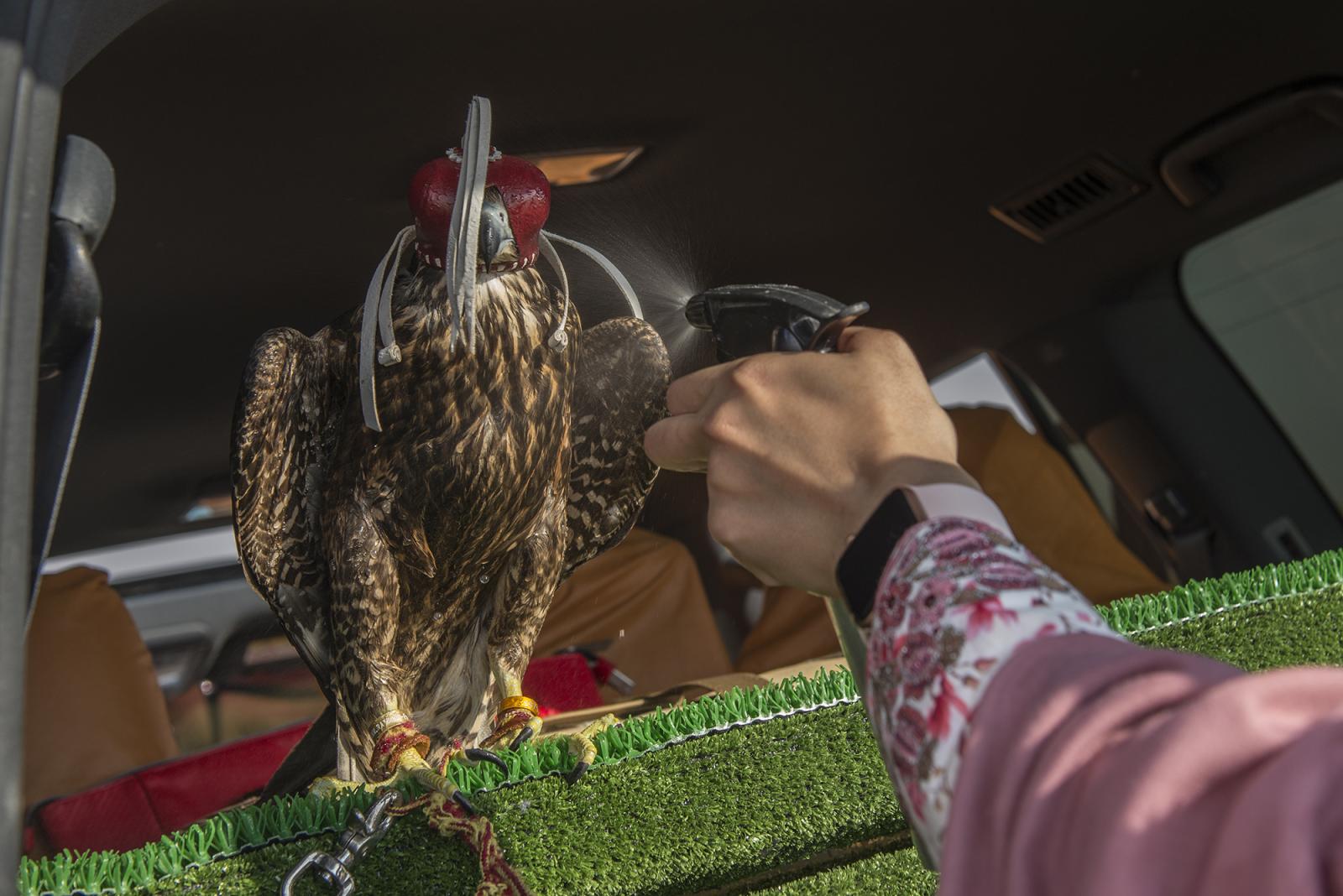 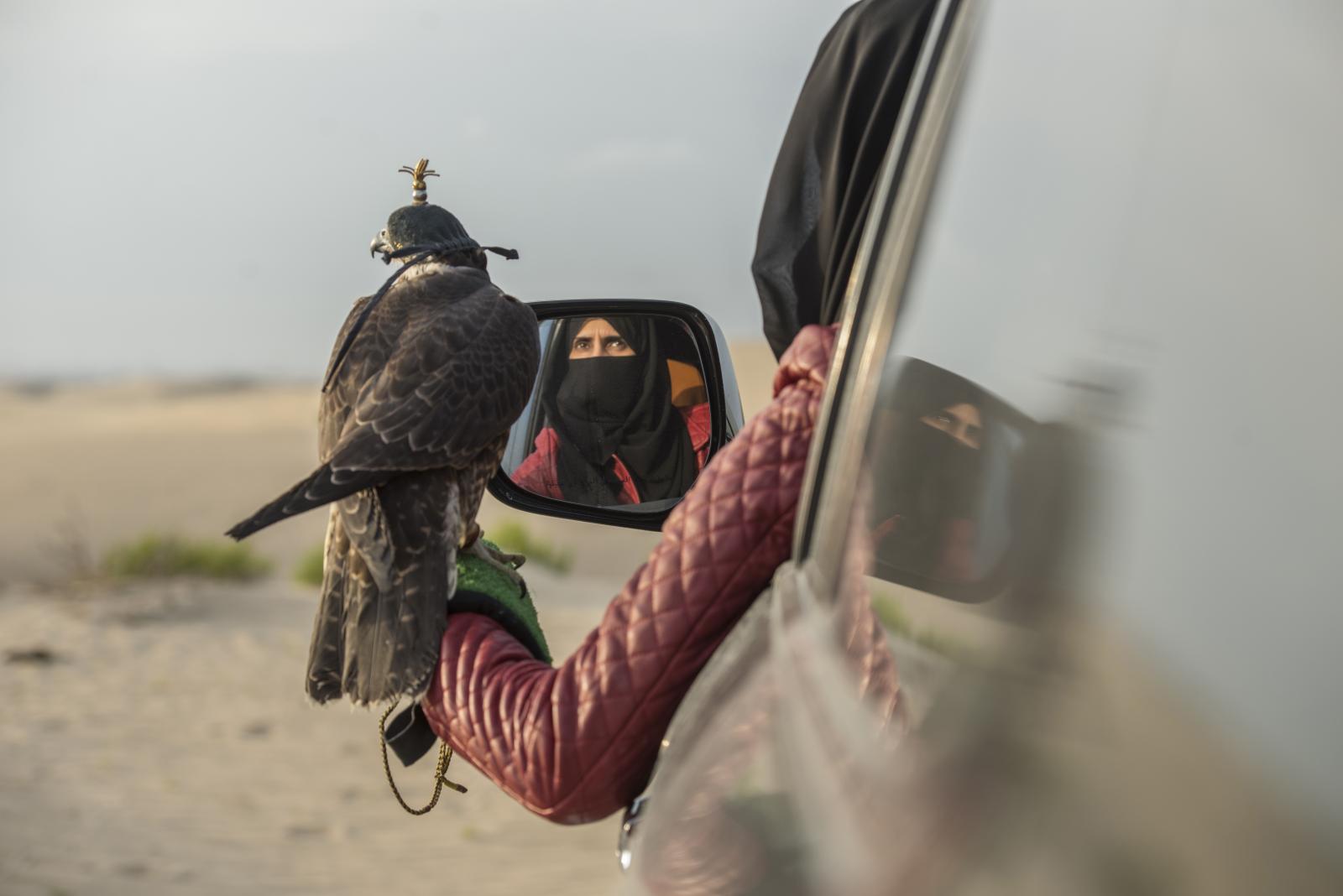 Women falconer drives the car in one hand and set to release the falcon for the hunt at  Abu Dhabi desert, UAE

Besides the constraining traditional factor, there is also the toughness of the sport which makes it very hard for women to hunt in the desert because this sport requires a lot of physically demanding.

Falconry is not an easy sport which requires a lot of strength, passion, and patience. 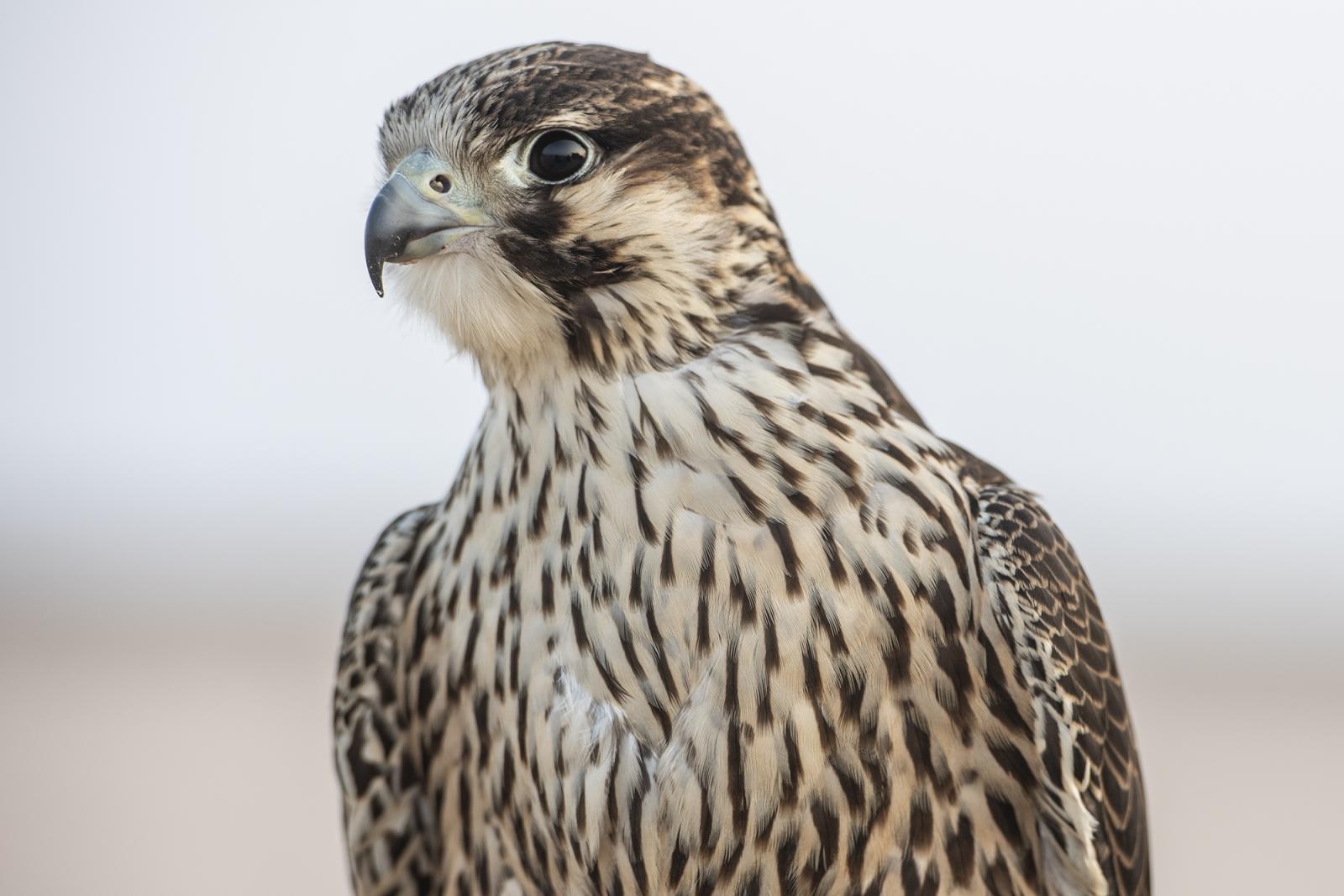 16 of 20 © 2021 Vidhyaa C
For The National
Falconry had been for centuries the bread and butter of many Emirati families in the desert until the advent of the modern weaponry for hunting. 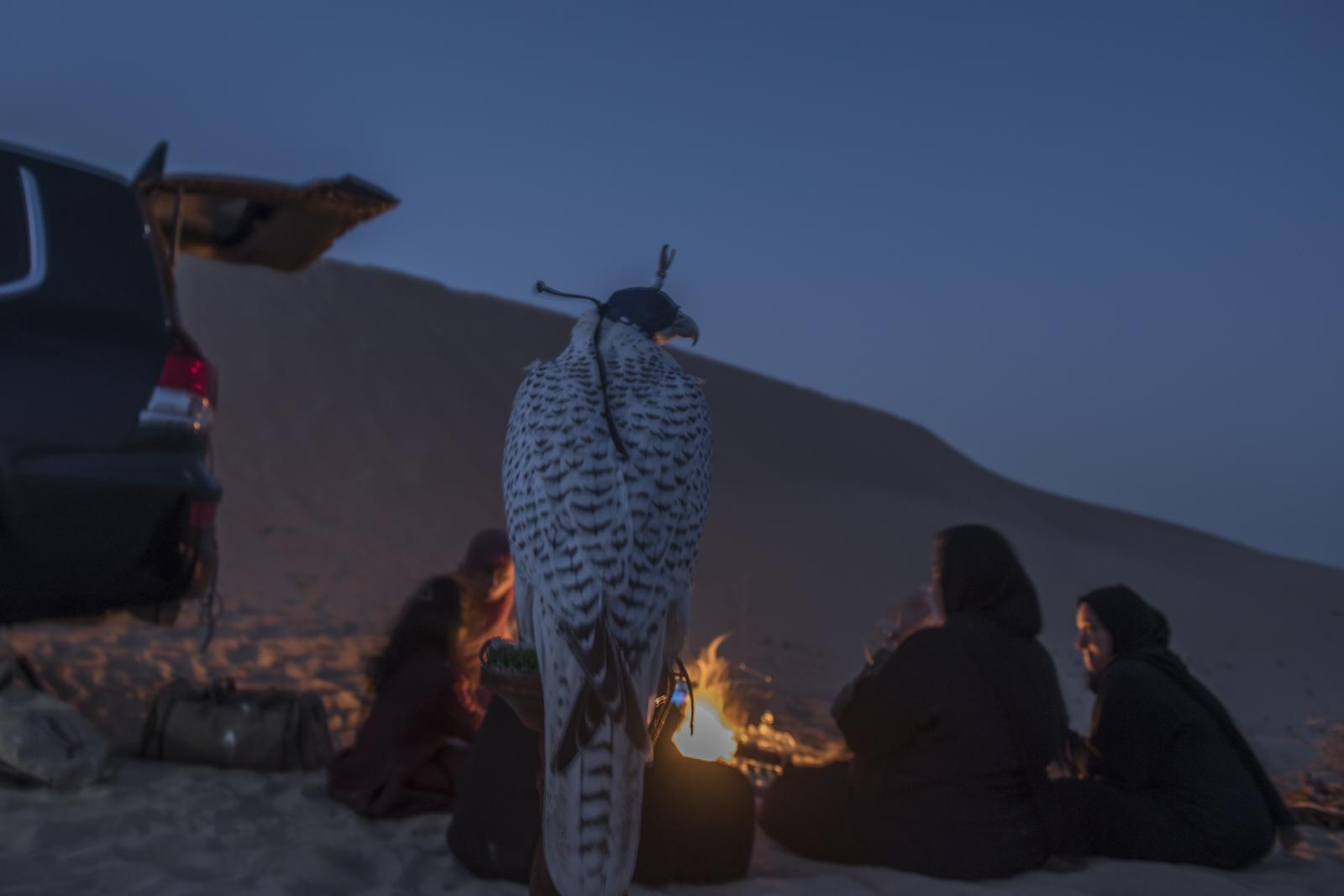 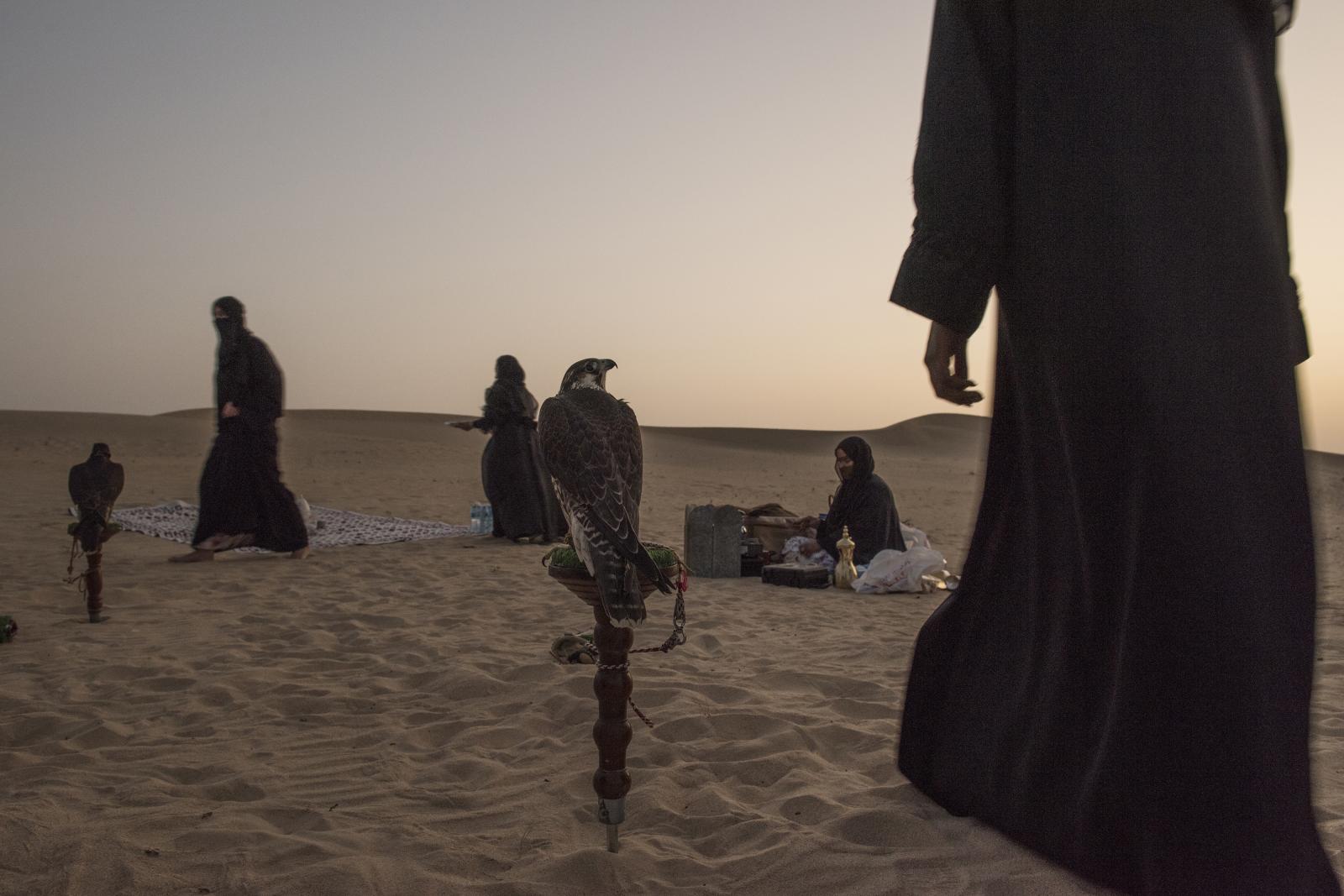 18 of 20 © 2021 Vidhyaa C
Ayesha and her student discuss family matters after falcon training , with camp fire , food cooked with camp fire and hot karak served to all. From ancient days, Falconry is not just hunting for food , which connects , strengthen the relationship. Abu Dhabi,UAE 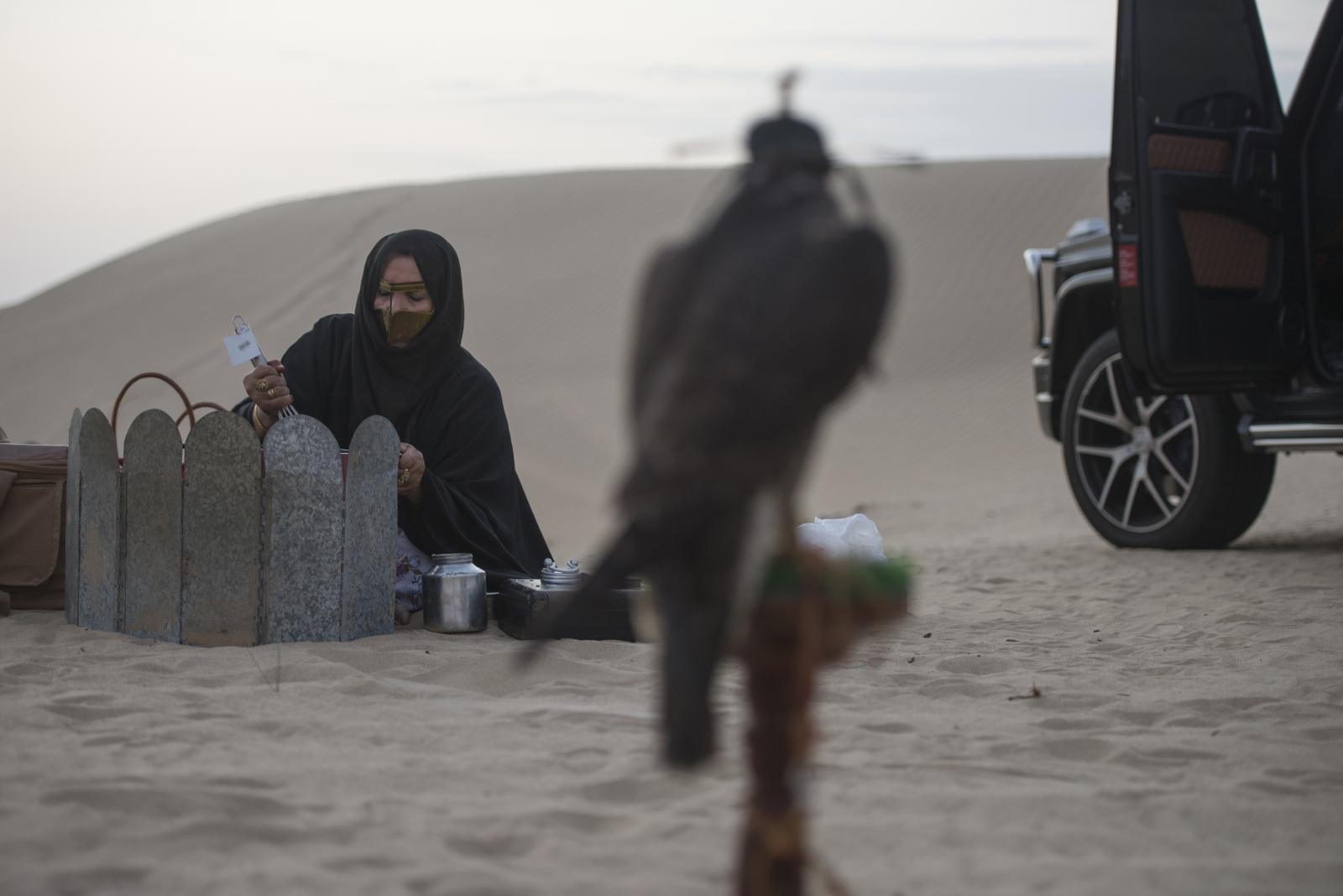 19 of 20 © 2021 Vidhyaa C
Food being prepared by Afrah Al Mansoori aunt of Ayesha after training session at the remote desert and the falcon rest in the perch at Abu Dhabi, UAE. This is photograph reflect traditional way of cooking in the desert which reflect Bedouin life and right side sophisticated car rim shows modernized of Abu Dhabi but falcon travels in Emirati life, past ,present and future. Vidhyaa for The National 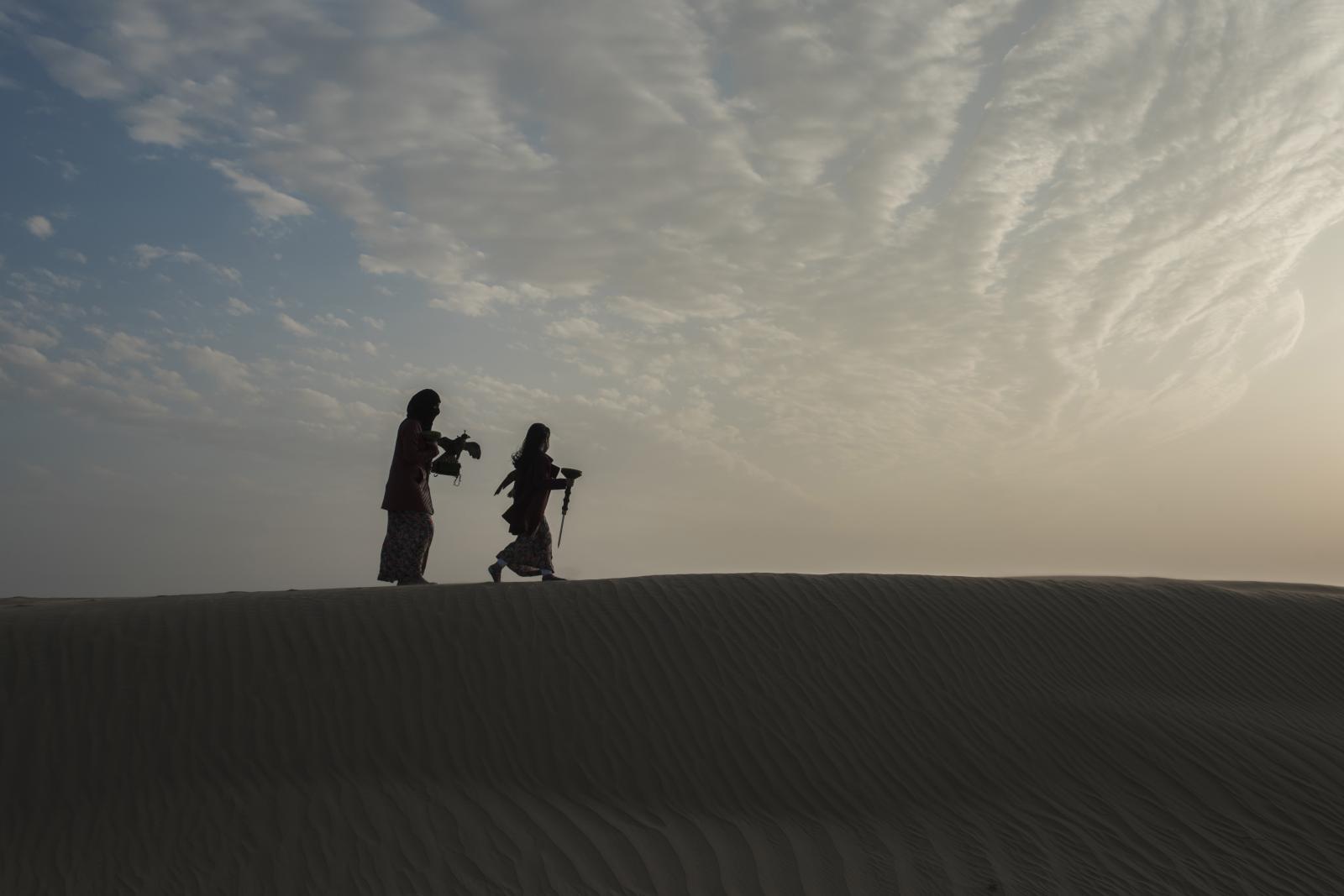 Emirati women in the art of falconry
For the past two years, i witnessed as falconry has shifted from being a purely male-dominated sport.
For thousands of years, falconry has been a male-dominated sport, but this is slowly changing. In 2017, Ayesha Al Mansoori began offering free training classes for women at the Abu Dhabi Falconers’ Club. Within a year, more than 50 women had signed up. “It’s important to promote it as a sport and emphasise the role of women,” Al Mansoori says. i spend past two years documenting these female falconers, following them into the desert around Abu Dhabi and capturing the candid moments that unfolded as they honed their skills.

“Female falcons are used for hunting because they are larger and more powerful than the males, and yet, historically, most falconers were men,”

“Throughout history, falconry was transferred from generation to generation, from fathers to sons, but now this is slowly changing in the UAE. The transfer of skills has altered from mother to daughter.”People have been practising falconry in the UAE for 4,000 years, primarily for hunting. Four years ago it was included in Unesco’s Representative List of the Intangible Cultural Heritage of Humanity. It is a pastime that continues to unite families and communities – a thread that connects the country’s past, present and future.

“My goal is to explore untold stories from UAE"

'Breaking stereotypes': 11 photos showing the UAE's female falconers
For the past two years, photographer Vidhyaa Chandramohan has paid witness as falconry has shifted from being a purely male-dominated sport

World Falconry Day: Meet the 7-year-old Emirati falconer transforming the 4,000-year-old tradition
Osha Al Mansoori has been trained by her mother from a young age to join the next generation of female falconers

By Vidhyaa C — Rohingya shared their stories during my visit to the Bangladeshi Refugee camp and witnessed hearing the..
Jun 8, 2019