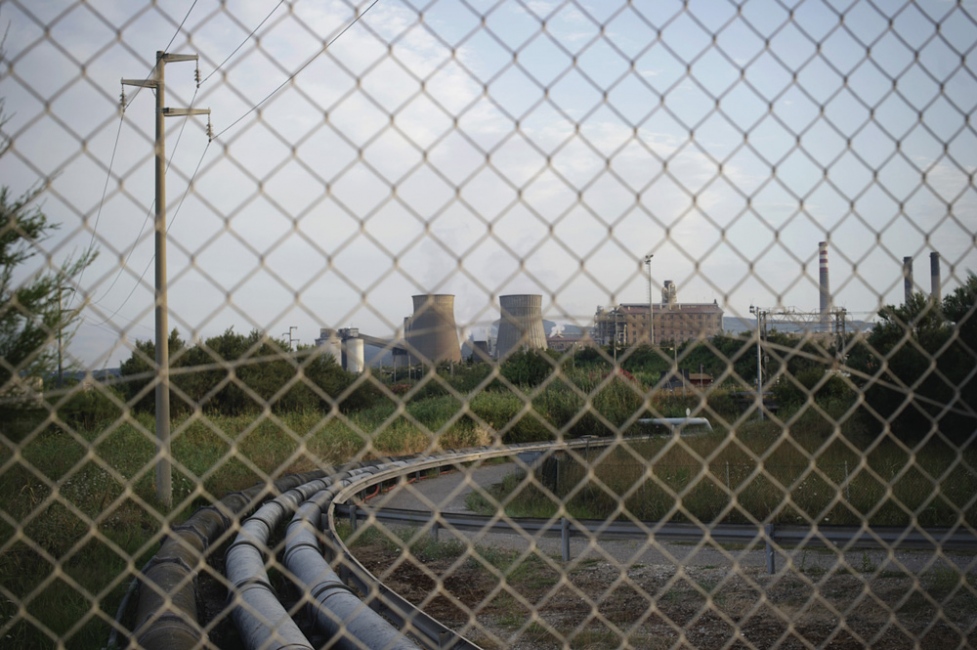 1 of 13 © 2021 Tommaso Rada
A view of the Solvay Factory in Rosignano and of the pipeline that transport the materia from and to the factory. The factory was built around the 1940. A local NGO calculate that 90000 tons of toxic wast was released in the sea in front of the factory. 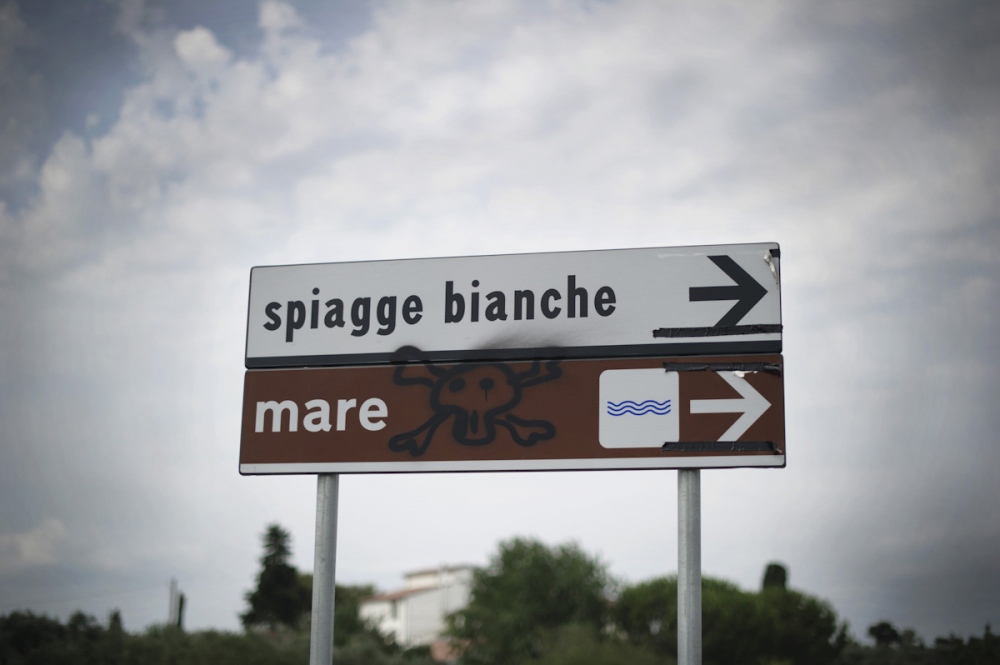 2 of 13 © 2021 Tommaso Rada
A sign indicating the direction to the white beaches. The beaches are with a carribean look, white sand and white water mainly because the Sodium bicarbonate released from the Solvay Factory, but this wasn't the only product wasted: also mercury and arsenium have been released in the sea. 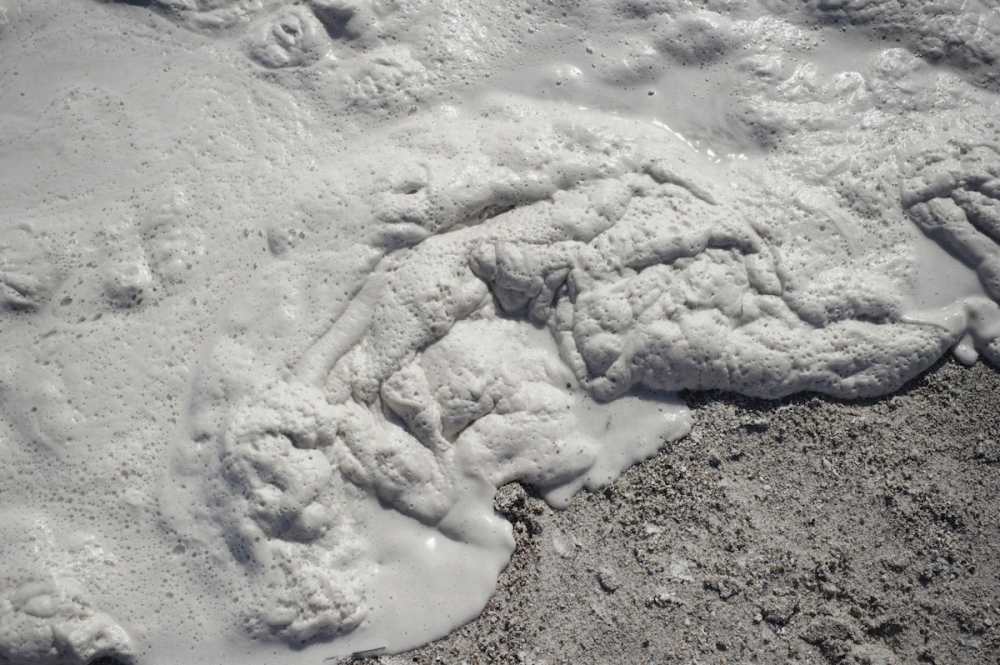 3 of 13 © 2021 Tommaso Rada
White foam in the beach in front of the Solavy factory waste ditch. According the United Nations Environment Programme the beaches in front of the Solvay Factory are between the 15th most polluted areas of the Mediterraneum Sea. 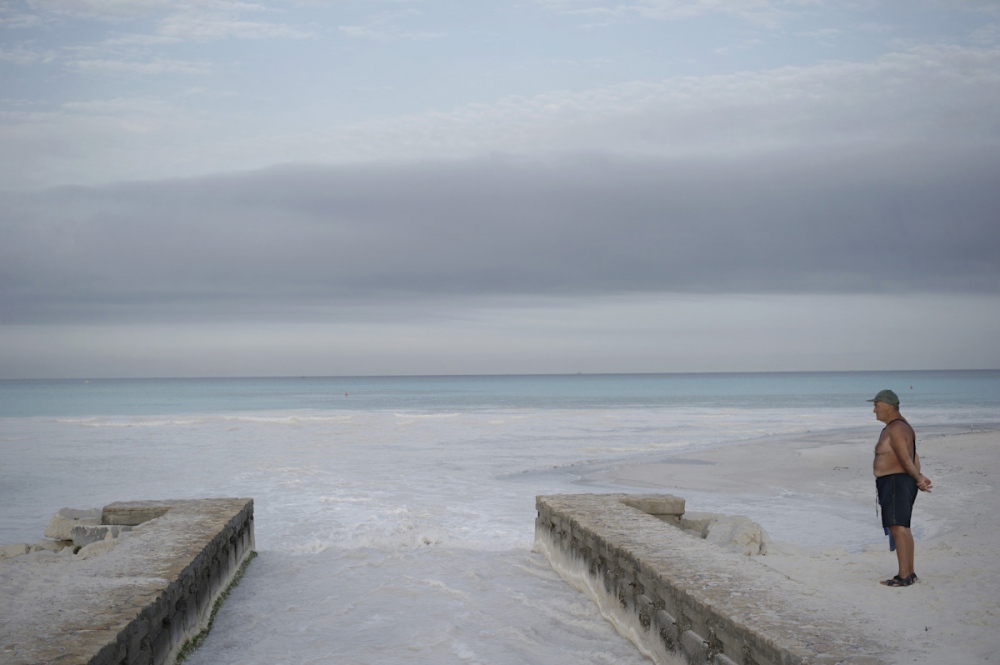 4 of 13 © 2021 Tommaso Rada
A Tourist look at the Solvay waste ditch. According the United Nations Environment Programme the beaches in front of the Solvay Factory are between the 15th most polluted areas of the Mediterraneum Sea. 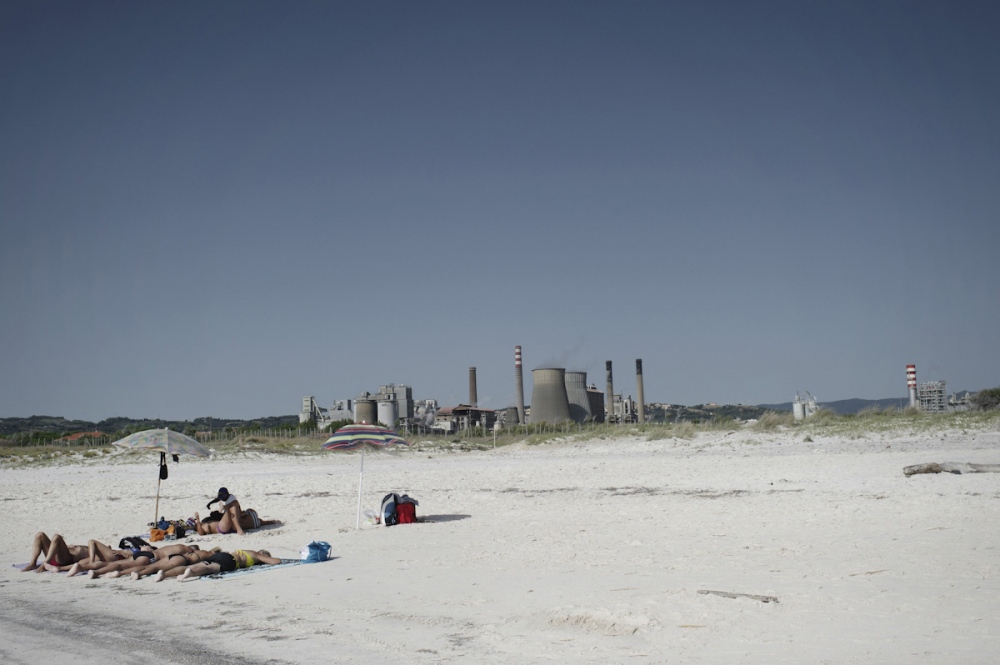 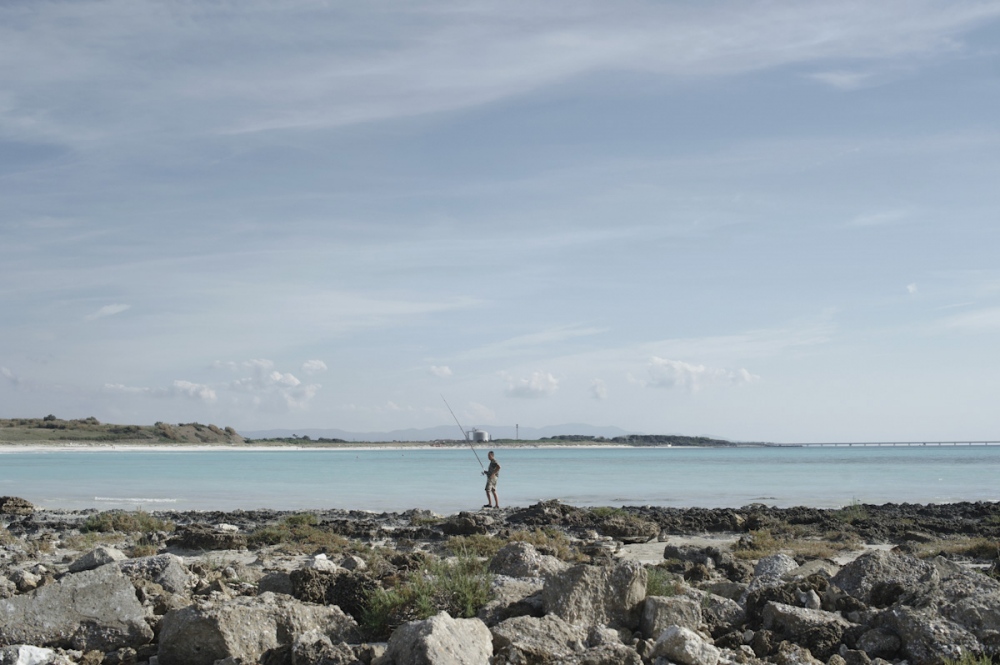 6 of 13 © 2021 Tommaso Rada
A Man fish in the water in front of the Solvay Factory. Because the industriial pollution the fish population is almoust extinct and the fishes present in the area are most likely contaminated with mercury. 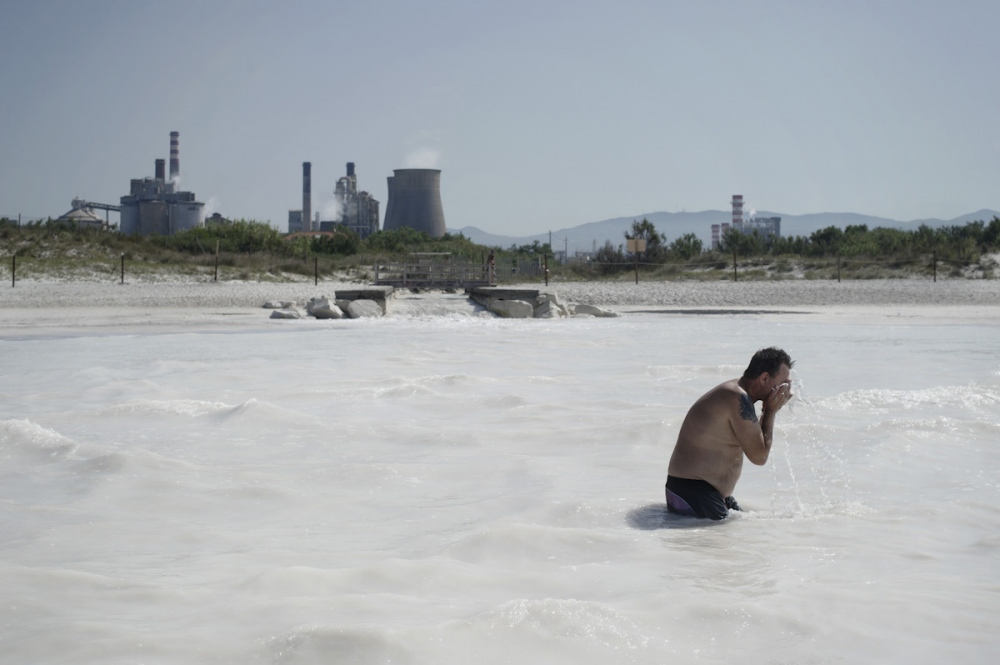 7 of 13 © 2021 Tommaso Rada
A tourist wash his face with the mud just outside the factory waste ditch. Because of lack of information not everybody knows that apart calcium and sodium bicarbonate there are also mercury 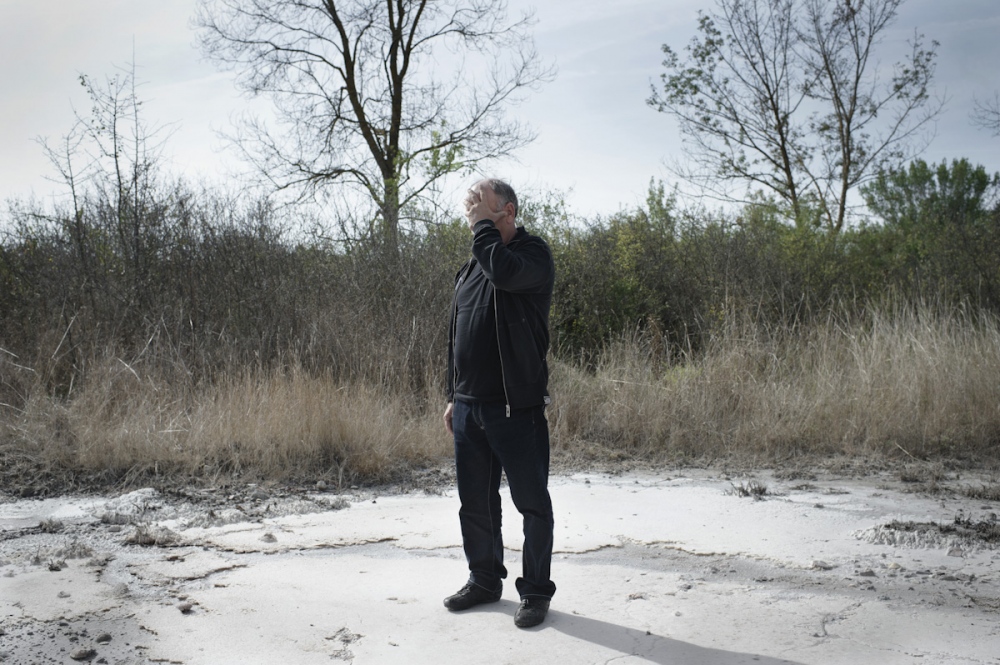 8 of 13 © 2021 Tommaso Rada
A Man intoxicated by Mercury pose on a former Salt mine. The salt (NaCl) used for the chemical reaction in the factory is extracted in the coutryside. 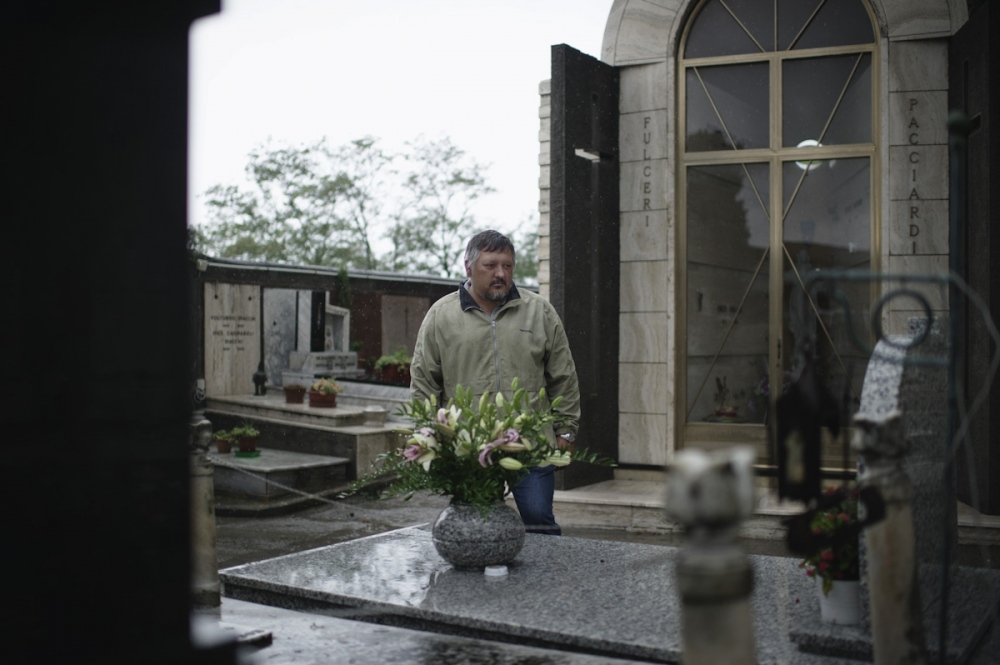 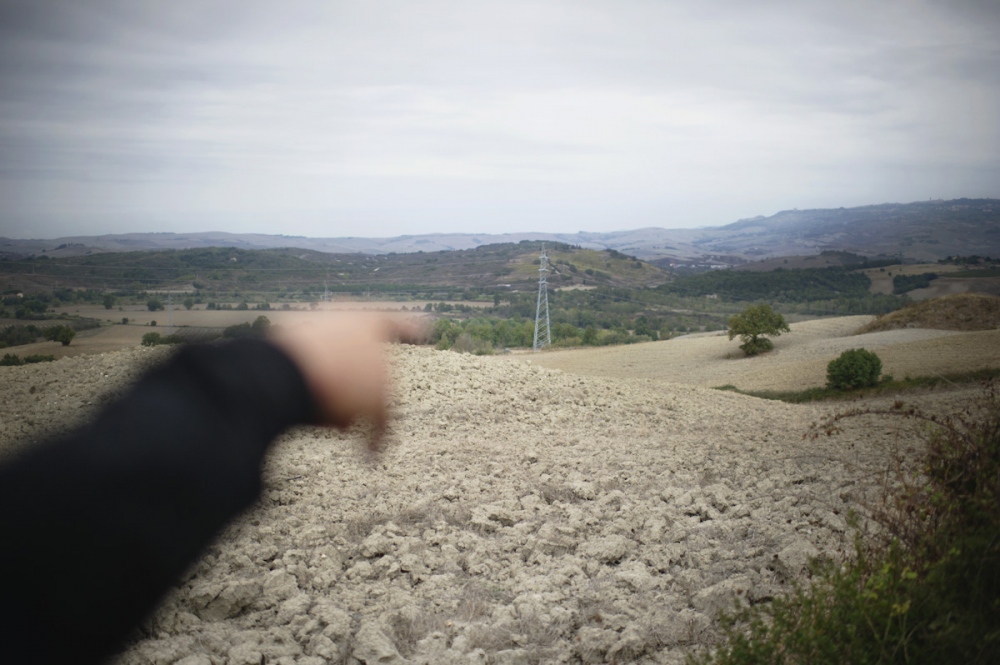 10 of 13 © 2021 Tommaso Rada
A Farmer indicate the Salt extraction concession. The growth as an elevated salinity that difficulties several agriculture culture. 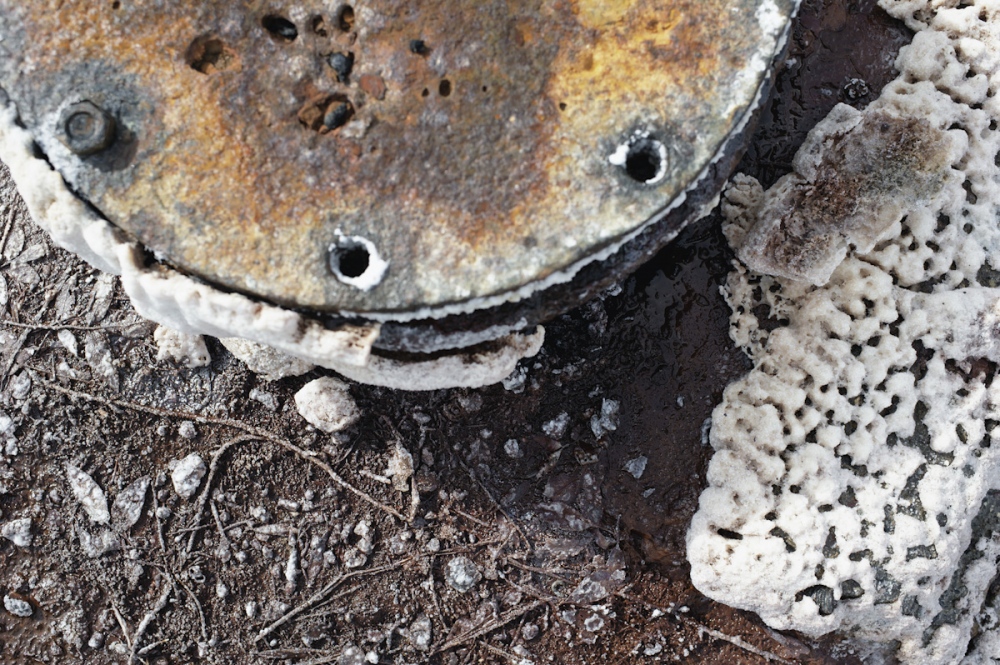 11 of 13 © 2021 Tommaso Rada
An old extration location. The salinity around the extraction point in high and create problem to agriculture cultures. 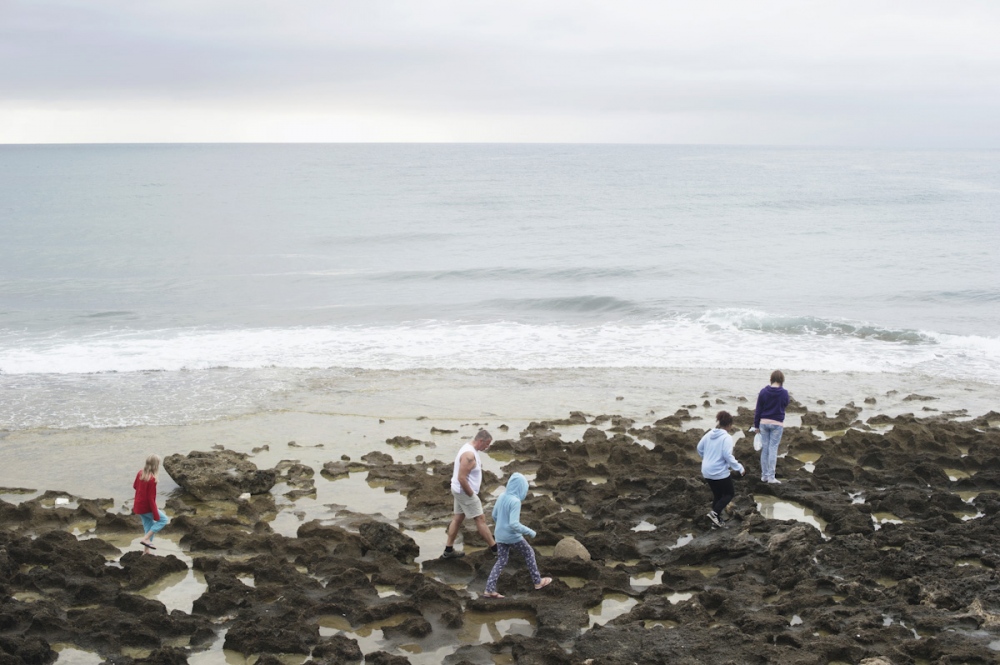 12 of 13 © 2021 Tommaso Rada
Tourist walk nearby the white beaches. The beaches are with a carribean look, white sand and white water mainly because the Sodium bicarbonate released from the Solvay Factory, but this wasn't the only product wasted: also mercury and arsenium have been released in the sea. According the United Nations Environment Programme the beaches in front of the Solvay Factory are between the 15th most polluted areas of the Mediterraneum Sea. 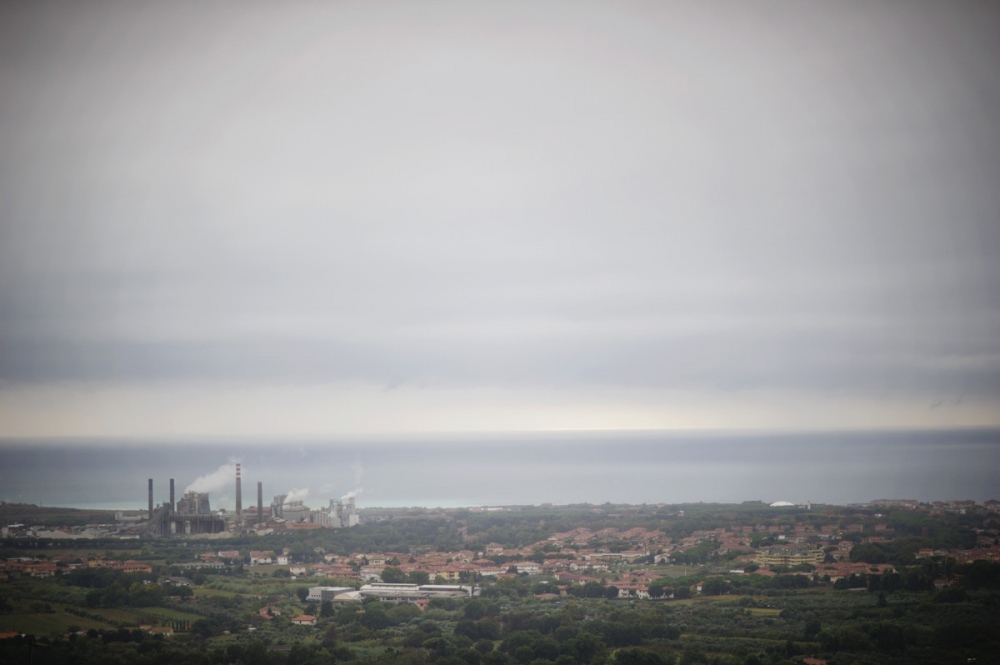 13 of 13 © 2021 Tommaso Rada
A view of the Solvay Factory and of Rosignano Solvay, the district built by the owner of the factory from the 1940. In 2004 the worker of Solvay were 1800 today they are around 800.
Public Story
Caribbean Illusion
Copyright tommaso rada 2021
Updated 10/12/16
Location italy
Archived as Agriculture, Documentary, Editorial, Environment, Environmental, Photojournalism, Travel, Vacation
Caribbean Illusion

In 1941 in Tuscany, between Livorno and Cecina, nearby a small village namedRosignano, Solvay built a factory for the production of chemical products derivedfrom NaCl, the common cuisine salt. During the years the Solvay group built anew village around the factory: Rosignano Solvay.

The salt present in the subsoil of Saline of Volterra is extracted using pipes thatinject high pressure water that dissolving the salt create a concentrate brine,which is then retrieved trough pipes using the high pressure created. FromSaline of Volterra pipes transport the brine to Rosignano Solvay where it isworked to produce Sodium Carbonate, Sodium bicarbonate, Calcium Chloride,Chlorine, Chloromethane, Plastic Material and Hydrogen Peroxide.

Once the salt is extracted from the subsoil it create cavities that cause thecollapsing of the superficial soil modifying the environment and the landscape,even more after the collapsing site become a salt lakes increasing the salinity ofthe soil and creating problems to agriculture cultures.

In Rosignano Solvay the main visible consequence of the factory action are thebeaches in front of the industrial complex; the Solvay factory has a ditch used torelease the chemical waste derived from the production of soda; the CalciumCarbonate deposited during the years created white Caribbean beaches. Whilethe Calcium Carbonate is not toxic, other substances wasted in the ditch andconsequentially in the sea such as mercury are toxic and extremely dangerous.According to the estimative of the Italian National Research Council in theseabed in front of the factory has been wasted 337 tons of mercury and otherpollution agents like arsenic, cadmium, nickel, lead, zinc, and dichloromethane;according to Legambiente, an environmental Italian NGO, the tons of mercurywasted are 500 and the pollutant is spread to 14 kms from the shoreline.According to the United Nations Environment Programme the part of the sea andbeaches in front of and nearby the Solvay factory are one of the 15th morepolluted coast place of the Mediterranean Sea. In 2010 the Solvay groupeliminate the mercury from the production cycle but at least 100000 tons ofwaste are still discharged in the sea. Despite the risk for the human health thebeaches are highly frequented by tourist and the beach with the sea got the blueflag (meaning that is a clean beach and not polluted sea).

Because of the pollution, the fish population decrease and the fish that resist inthese waters are contaminated with mercury creating the consequences for thefishing industry.
The Solvay factory was employing 1800 worker until 2004 but today they areonly 800; in the factory has been used for long time asbestos to cover the pipes.Today this fact creates at least 2 problems: several workers and former workersare sick of asbestos related diseases and part of the asbestos material waswasted as normal garbage. The factory is consider as an high risk site and thereis a plan for evacuation in case of danger; in Rosignano Solvay the people don"™tlike to speak about the factory or the risk of pollution, the Solvay group gave jobsfor many years and also has a lot of power in the area. Even do something is

changing, in 2013 the Solvay group has benn investigated for illegal waste andthe industrial group cut a deal with the Italian prosecutors.
An entire ecosystem, from the typical Tuscany countryside to an artificialCaribbean like sea, is in dangerous and the health of the people that lives in these places is at risk.

By tommaso rada / reunion — The Reunion Island  The name recall the ideia of union and perhaps it is because the small island in..
Nov 11, 2018