Acid attack is one of the most terrifying, barbaric methods of revenge. In India, up to several thousand acid attacks are still recorded annually. Most of the victims are women (97% of all cases). The most common cause of the crime is unrequited love or jealousy. The goal of an attacker is to deprive a woman of her face, in the truest sense of the word.
After the attack, a woman experiences not only physical pain, but also a severe psychological trauma, which takes years to work with. The fact is that the help of psychologists is simply absent in some regions of the country, moreover, it is still considered something shameful to consult a psychologist. Unfortunately, many victims can not stand the struggle and take their own lives.
There are a lot of other issues. Indian society is patriarchal. In rural areas girls are considered mostly as beautiful housewives and to lose beautiful face is regarded as the end of the world for a girl and her relatives. The victims of the attacks are being discriminated on the daily basis. Strangers on the streets are saying "it is your fault that men are treating you like that. You made him jealous". They also can't get a proper job despite the fact that some of them are completely capable.
In the project, the girls who found the inner strength to survive and to overcome the nightmare which happened to them pose for portraits and share their memories. 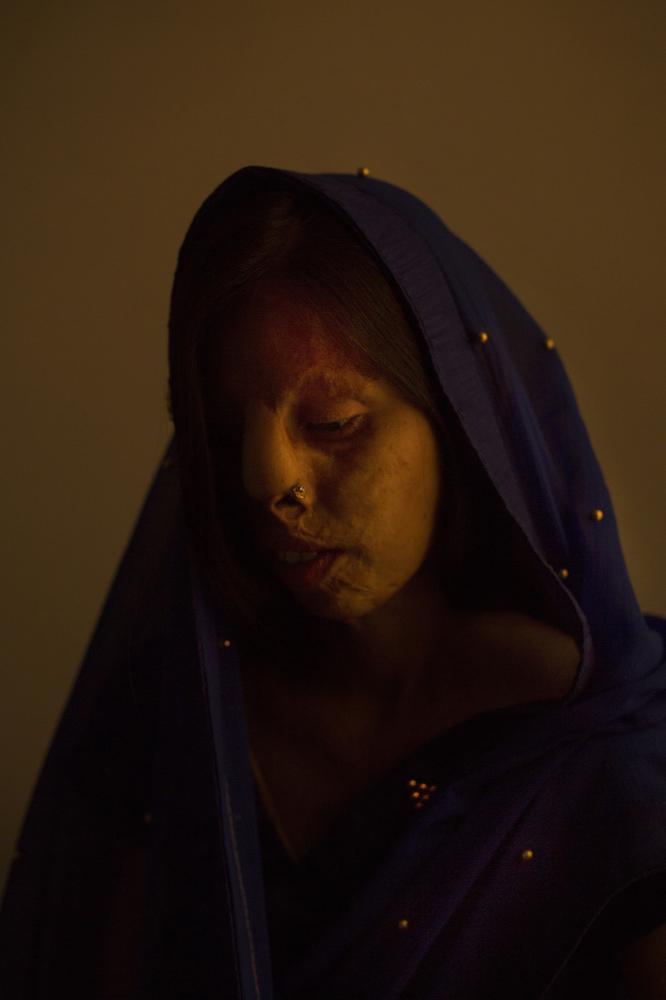 1 of 11 © 2022 Sergei Stroitelev
Shabnam is 29. She perfectly recalls how the attack happened on the 22nd of June 2005. The guy who performed some maintenance work in the house of the girl started to abuse her physically, Shabnam pushed him. He ran away but after some time returned with acid in the bottle.
Shabman survived the attack but had to accept new face. The girl also realized that the attitude of people towards her changed after the attack. Some family members even started to ignore her, stopped calling her to the festivities and weddings. For a long time she could not look at the mirror and talk to people, could not imagine herself being photographed.  Everything changed when a security guard from the shop where she worked as a saleswoman proposed her. The girl realized that she could trust people. 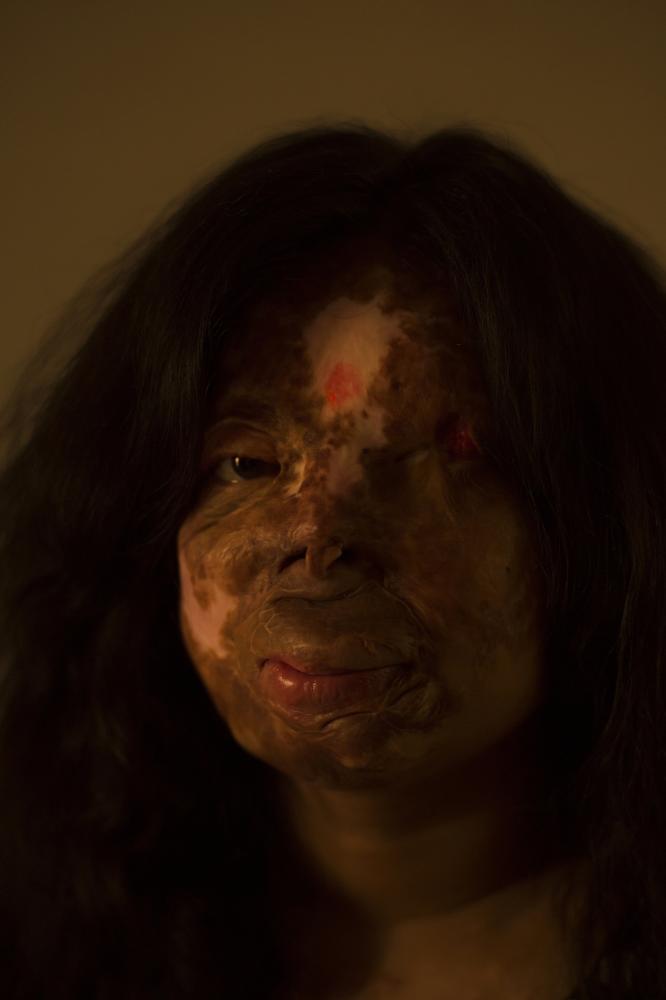 2 of 11 © 2022 Sergei Stroitelev
Anshu Rajput was attacked by her neighbor at the age of 15, a man whose she had earlier rejected as a boyfriend. He jumped over the wall between their homes in Bijnor, Uttar Pradesh, and poured acid on her face.  She spent 5 months at the hospital after that.
The perpetrator went to prison, but Anshu’s life was affected beyond the marks that her face bear. She was initially blinded by the acid, but slowly she started regaining her sight only to see that her face looked absolutely different. As an outcome she was struck off the school register. School principal said she could not come to school anymore because her face would scare other children. With the help of NGO in charge of women's rights her parents were able to restore the justice. She has recently enrolled at the University in Agra and planning to become a teacher. 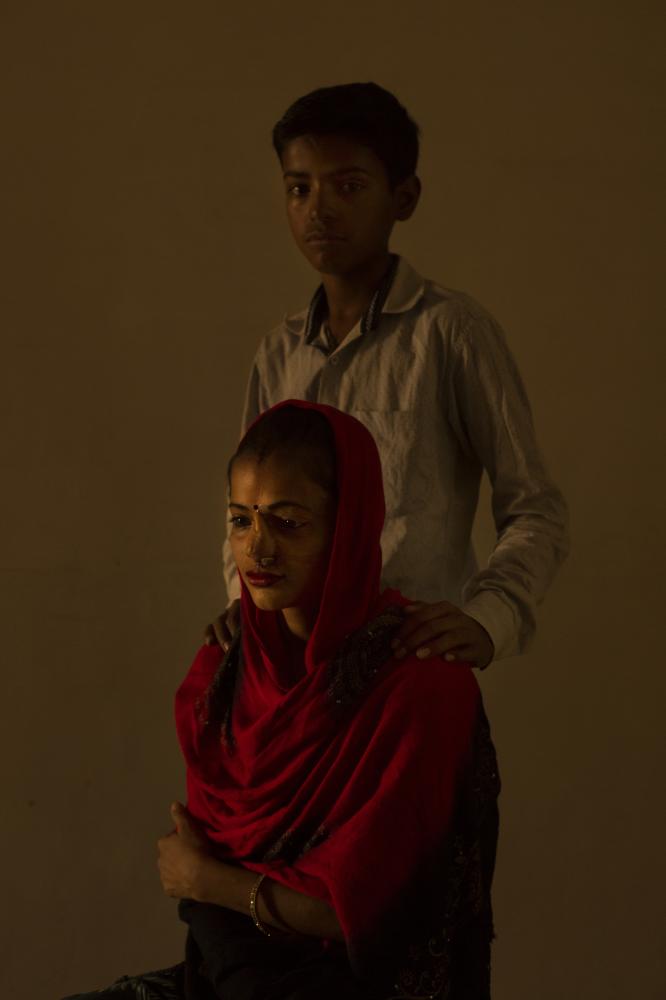 3 of 11 © 2022 Sergei Stroitelev
Bala is 22. She was attacked just recently - 3 months ago. The man who committed the crime was trying to abuse her several times. He lived in the same neighborhood and knew that Bala went to the market every day at the same time to get fresh vegetables. He was waiting for her near the market asking to go out with him. Bala did not take him seriously. The man who was 28 at that time chased her for about 2 months. One day he got drunk, bought 0,5 of acid in the shop and poured it on Bala's face saying - "if you are not mine then no one will own you".
Bala's younger brother discovered her on the ground in the dust near the market and took her to the hospital. Bala still feels very unsafe and does not go outside. Her brother Rakesh promised to take care of her from now on. 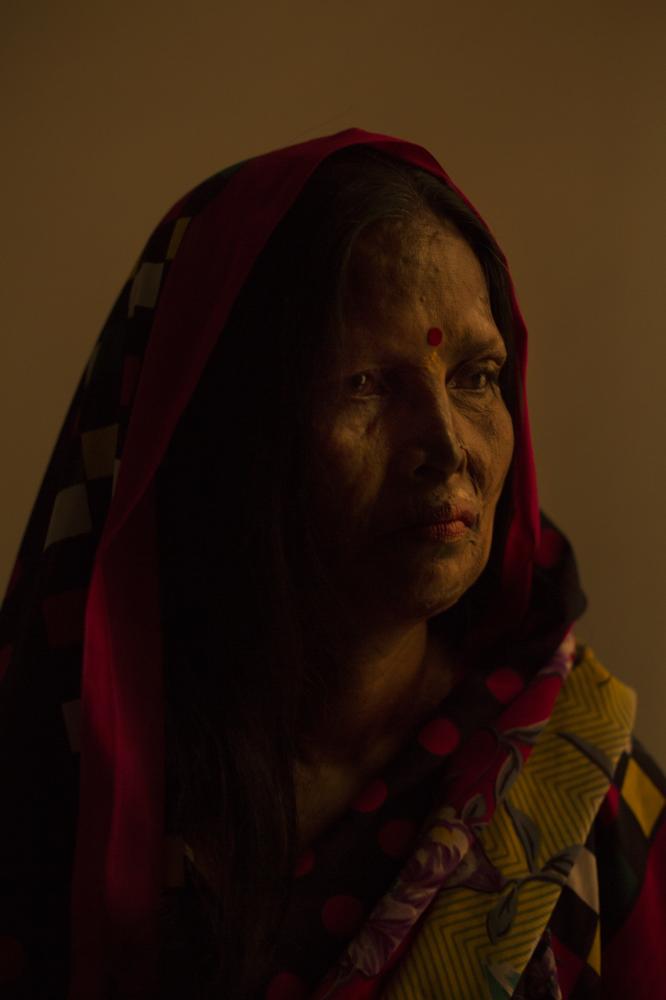 4 of 11 © 2022 Sergei Stroitelev
Inderjeet Mahour, 60, attacked his wife Geeta Mahour, 40, and his two daughters Neetu, 3, and 18-month-old Krishna, with acid as they slept in Agra, in Uttar Pradesh over 23 years ago. Even though Geeta suffered horrendous injuries, Neetu was left blind, while Krishna tragically died on her arms, she shockingly managed to forgive her husband. They went on to have another daughter eight years later, and today she still shares bed with him and cooks him dinner every night. Geeta said that after recovery from her injuries she was worried how she’d raise her kids alone so decided to forgive the attacker. Geeta is telling that for some years Inderjeet was nice to her. But eventually he started drinking and gambling. Even today when he gets drunk, he threatens to kill the woman. 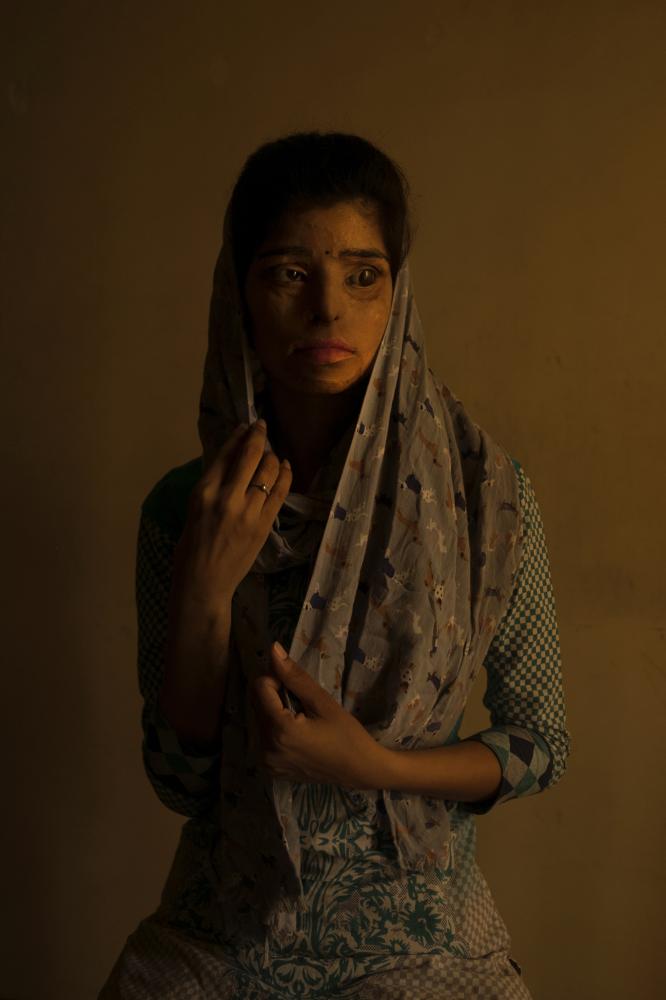 5 of 11 © 2022 Sergei Stroitelev
Ritu left her house in Agra to play volleyball with friends. Suddenly, two men on a bike approached her. Before she could suspect anything, the man in the back doused her face with acid from a bottle of cola. She saw the man responsible for the attack sitting in a car on the other side of the road. It was the son of a friend of her mother. The reason was the refusal of an intimate relationship. She recalls the terrible pain. The acid from the bottle got into her eyes, face, cheeks. Everything was on fire.
For about a year, she hardly left the house, and if she did, she completely covered her face with a handkerchief. Then she found out that she was not alone by reading article in the newspaper. Contact with other victims of the attacks helped a lot. Ritu began to gradually return to life but the lack of understanding on the part of society was very depressing. Many men thought that if something like this happened to her, it means that she had brought the man to the crime. 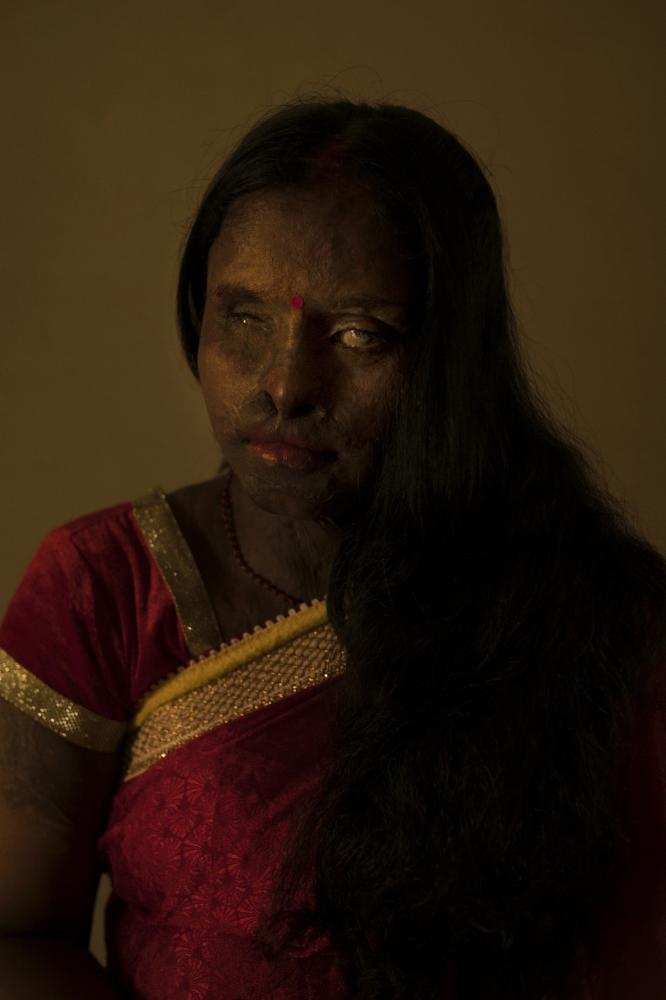 6 of 11 © 2022 Sergei Stroitelev
Rupali, 22, always dreamt of making her name in the talent industry. One day she got a chance to showcase her talent in a singing competition held at her school. The organizers were so impressed that they asked her to visit their office in Balia, closely located to Ghazipur. She met a man - Ajay Pujari there. He assured her that he would be glad to find her better roles in films. Soon he began to express his feelings towards the girl but was refused.
One day at a shoot location Rupali started feeling dizziness. She went to a room to take a breath but went asleep immediately. Then around midnight somebody poured acid on her face. Ajay was arrested and confessed. Rupali was taken to the hospital where she spent the next 6 months. A doctor from the hospital where she was recovering proposed her but his family did not support the wedding stating the girl was from different caste. It was just their excuse to reject her because of the deformed face. Rupali remembers how they looked at her. 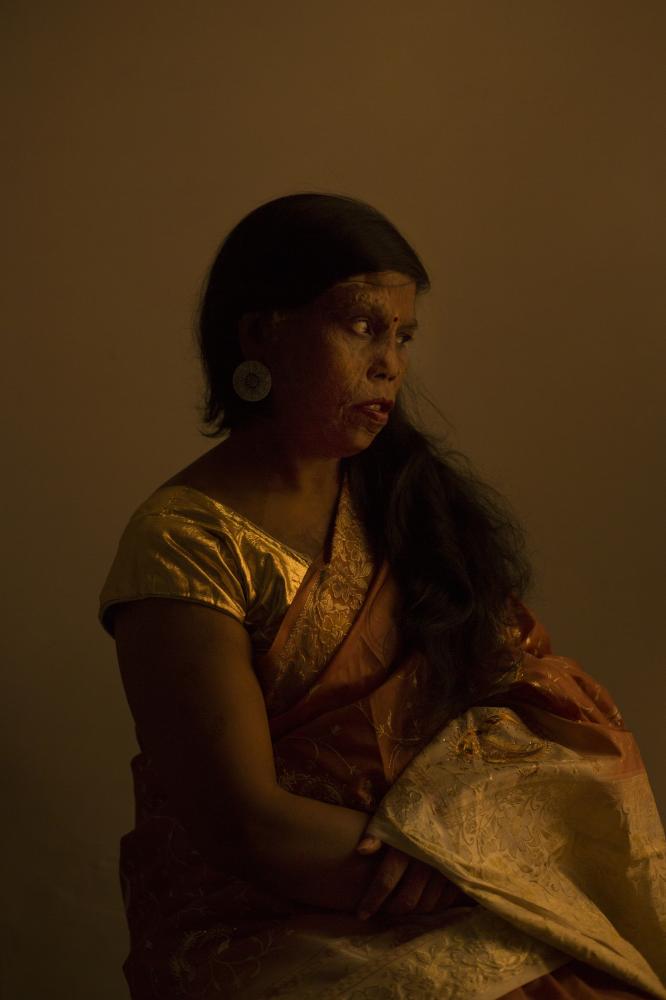 7 of 11 © 2022 Sergei Stroitelev
Amita was 17 when she was attacked by a landowner who had killed her grandfather. He proposed her but the girl's grandfather refused. The offended man decided to take revenge and stabbed Amita's relative. Her brother reported the murder to the police, and the landowner was given a seven-year sentence. He called Amita several times from the prison saying that he was going to kill her. After 4 years he was released. Amita thinks that he bribed somebody.
After 2 weeks time the man came to Amita's house, beat her, raped her and when she was unconscious poured acid on her face. Amita was taken to the hospital by her brother where she got blood transfusion. It took 3 years to recover mentally and physically, to get rid of fear of men. She remembers how she tried to commit suicide by taking sleeping pills as depression was overwhelming.
Now she works at the market as a saleswoman and hopes to get married some day. 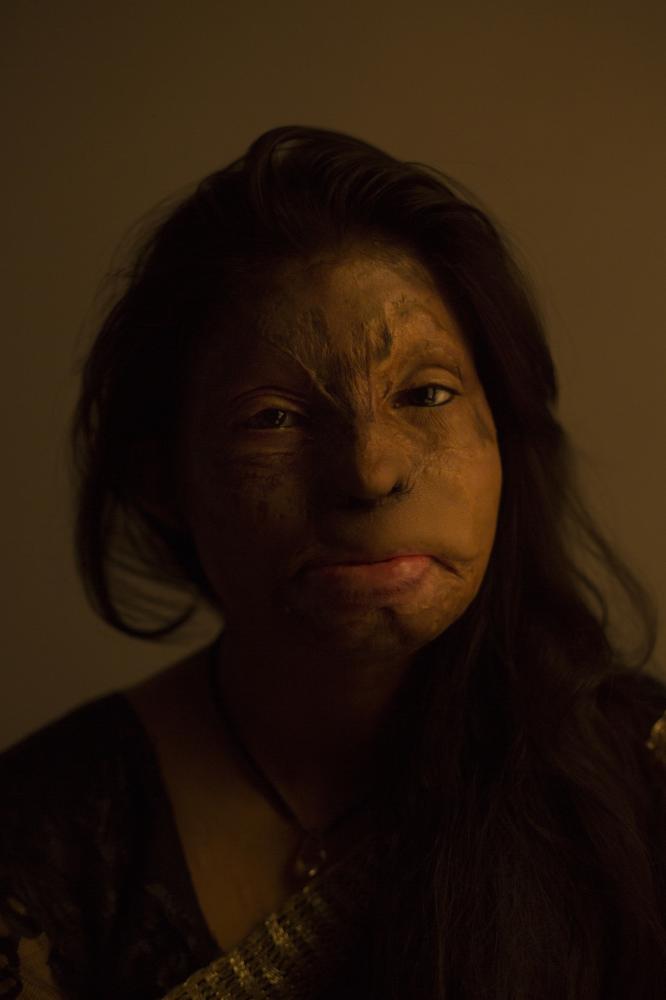 8 of 11 © 2022 Sergei Stroitelev
In 2008 Rupa’s drunk step mother poured acid on her face while she was sleeping in her house in a village near Muzaffarnagar, Uttar Pradesh. Rupa was only 15 years old.
She started staying with her uncle who came to her rescue at the right time. Confined within the walls of her new home, she stopped going out, and refrained from all forms of interactions. Her uncle bore the cost of her treatment and surgery, but with a disfigured face, her state of depression continued. It was around that time when she first heard about the "Stop Acid Attack Campaign". Driven by curiosity, she participated in it. She met victims like herself and received rigorous counselling and training. Now she is consulting other women who faced acid attacks. 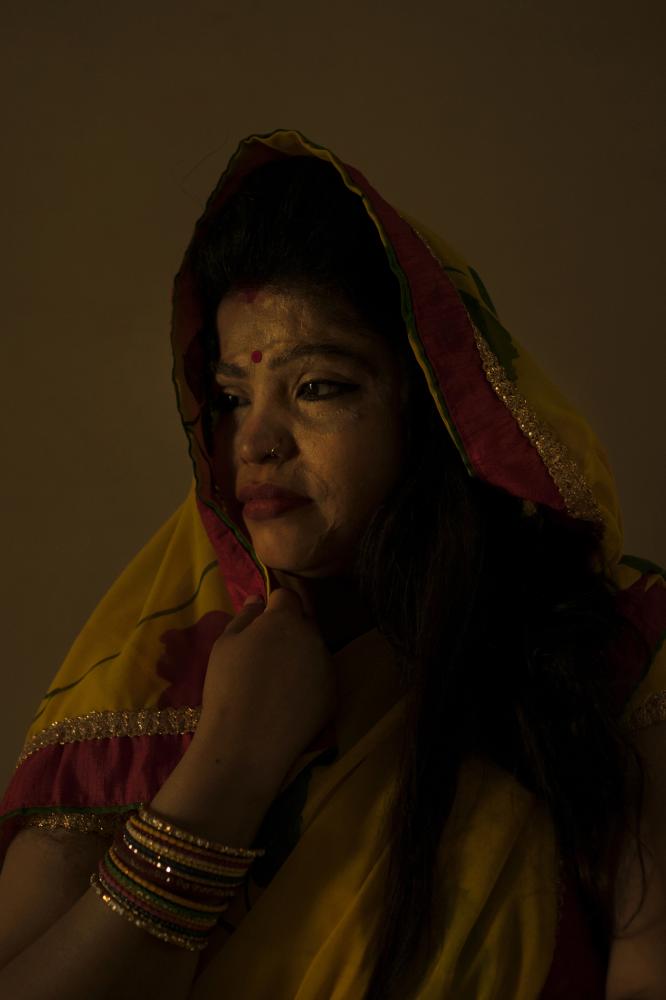 9 of 11 © 2022 Sergei Stroitelev
Kavita was attacked by two boys in June 2012 after she rejected the courtship of her neighbor Saif. The man paid 50 000 rupees to the boys.
Kavita's parents told her if she was going to take her attacker to the court, she could not live with them as Saif's family was very influential in neighborhood. Kavita decided to report realizing she should not allow anyone to get away with this. She became determined to see her attackers behind bars. Eventually Kavita's relatives disowned her.
The girl found new home at a shelter of one of the NGO's. In 2017 Kavita felt that she fully recovered from trauma and started to work in a cafe as a service woman. She is dreaming of children now. 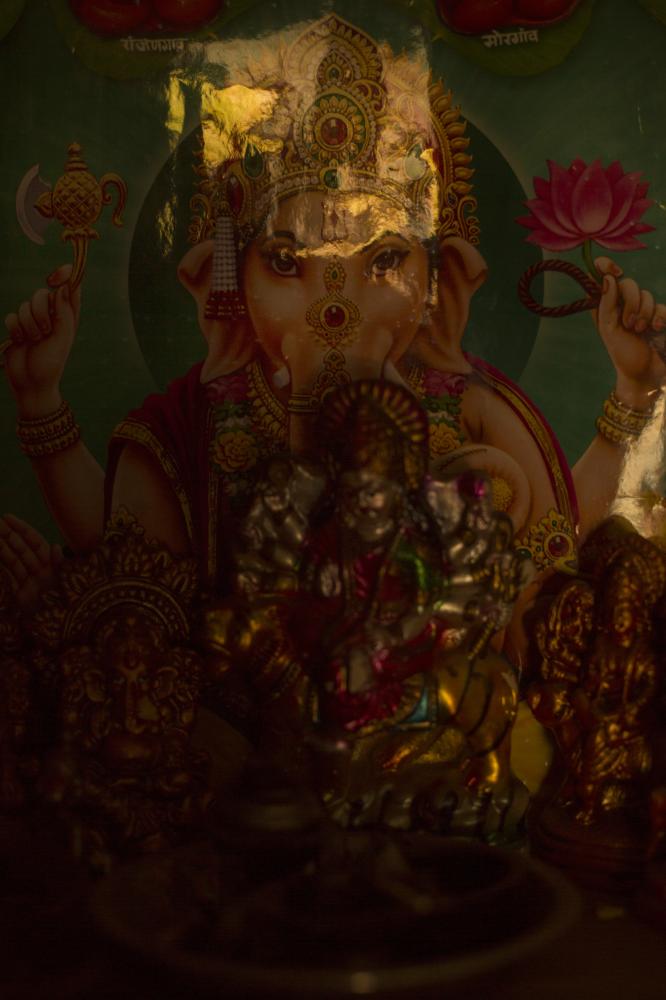 10 of 11 © 2022 Sergei Stroitelev
The image of Ganesha - one of the most important gods of wisdom in Hinduism captured Inside the dwelling of Shabman - one of the heroines of the story.
After the attack a victim usually stays inside her dwelling for a long time. Psychological trauma and the fear of people are very strong. Some girls don't leave their home for up to 2 years. It is hard to say how long it takes to heal all the psychological wounds. Religion helps a lot.
Close

Russian Women's Bags from the Inside

From Day to Day

Where the Champions Are Born

The Vicious circle / The Edge - Drug Addiction in Nepal

Book - "The Color of Violence"

Am I Not Scared Anymore?

The House of Light