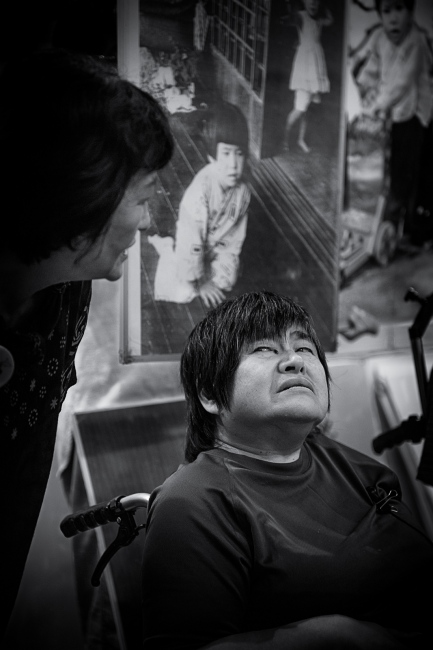 1 of 20 © 2021 Mick Stetson
Kiyoko Kagata is a Minamata disease victim. When she was 7, she began to show signs of the disease and was taken to a hospital for tests. She never left, and has lived there her entire life. The isolation she felt initially was devastating. As years passed and younger patients arrived whose family memories were also aborted, Kiyoko decided to help them, consoling them as an older sister. With the director of Hot House, Takeko Kato, Kiyoko and other congenital victims tell their stories with the hope of preventing further industrial pollution tragedies. 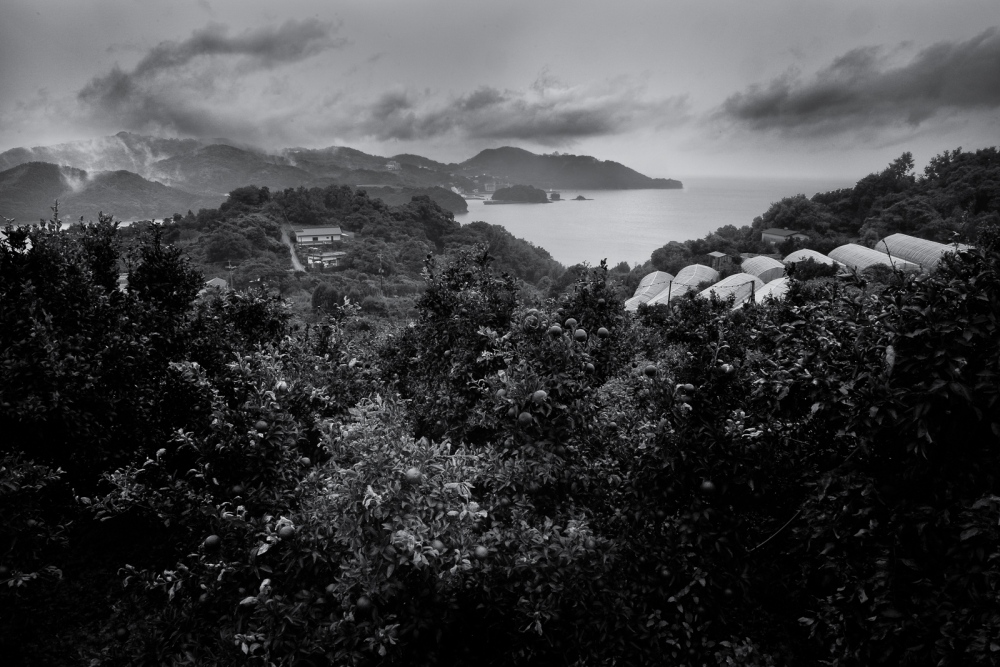 2 of 20 © 2021 Mick Stetson
Minamata is a rural community where most people either farm or fish for their livelihoods. It's located on the southwestern shores of Kyushu Island, bounded by an in-land sea â€” Shiranui Sea. 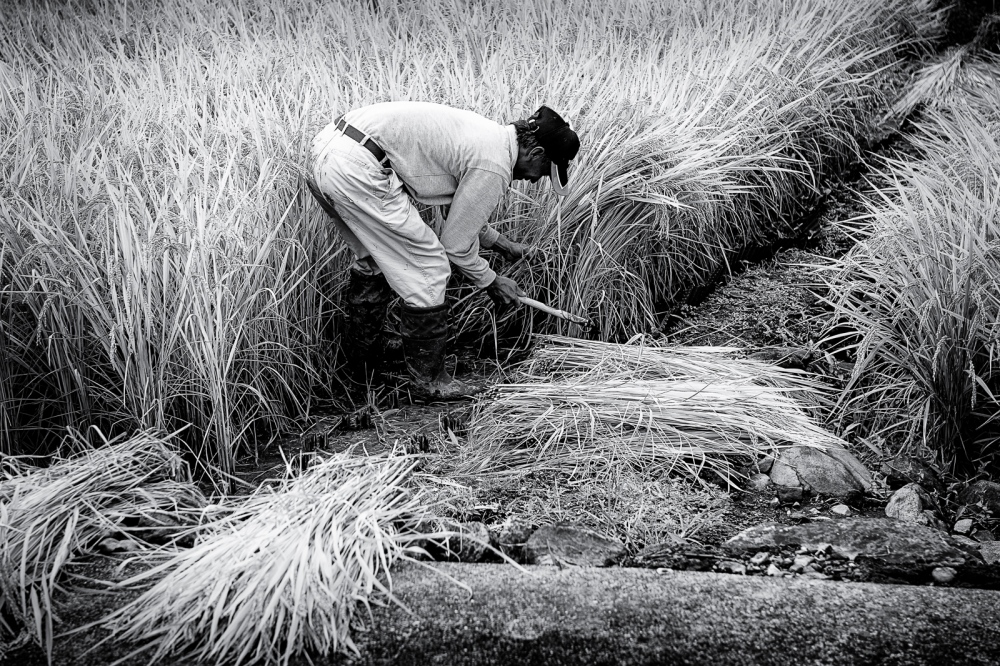 3 of 20 © 2021 Mick Stetson
Farming is still done using traditional methods. Itâ€™s not uncommon for families to engage in both farming and fishing to make their livelihoods 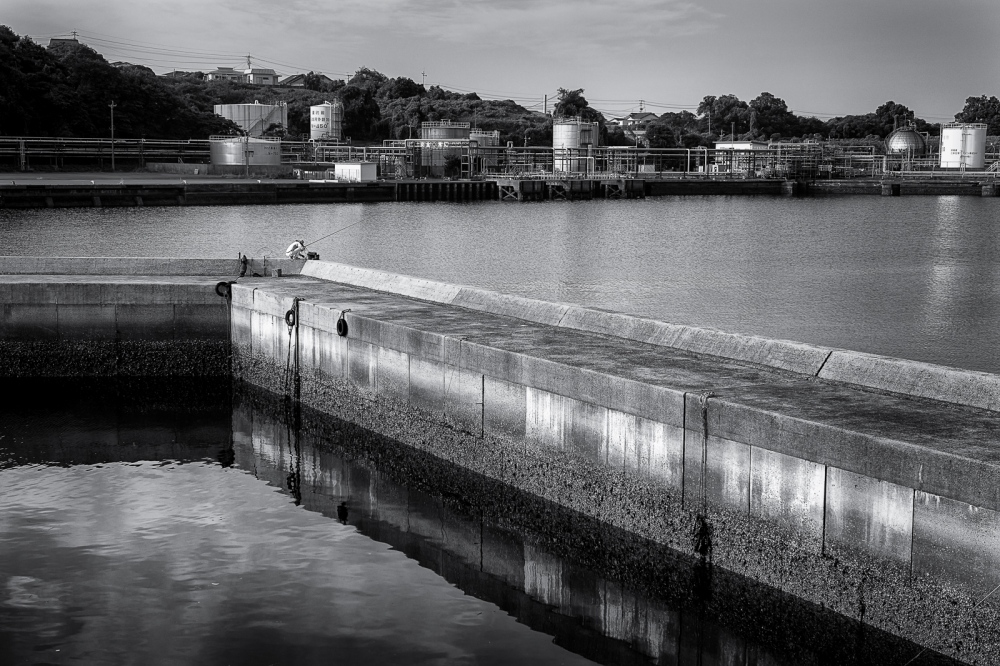 4 of 20 © 2021 Mick Stetson
Chisso Corporation was invited by the prefectural government to build a factory in 1907. Before WWII, it began producing acetaldehyde, using methyl (organic) mercury as a catalyst and secretly dumping its effluent into the Shiranui Sea. They stopped using mercury in 1968 only because it was an outmoded method of production. 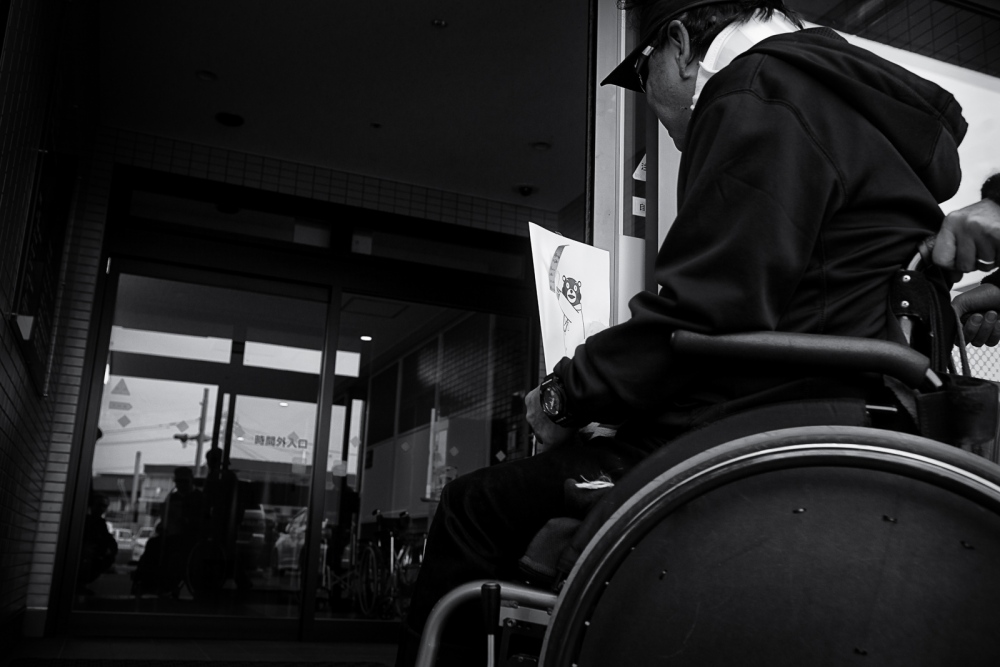 5 of 20 © 2021 Mick Stetson
Congenital Minamata Disease victims are either full-time residents of rehabilitation centers or they have to visit these centers two to three times a week for therapy. Koichiro Matsunaga was born four years after the drainage from Chisso factories was recognized as the cause of the disease.  Koichiro wonders, â€œWhat if Chisso had stopped the drainage at the time.â€ 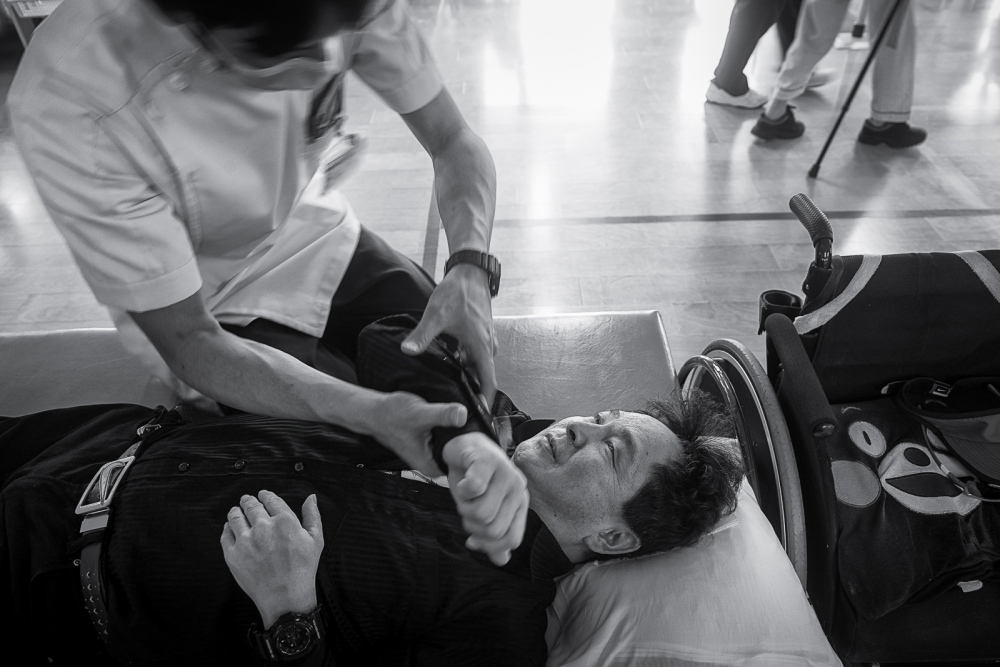 6 of 20 © 2021 Mick Stetson
Koichiro used to ride a touring bicycle, but had to stop 15 years ago because the muscles in his arms and legs started deteriorating due to the mercury poisoning in his body. Every week, physical therapists help him exercise and stretch to keep movement in his limbs to prevent atrophy. 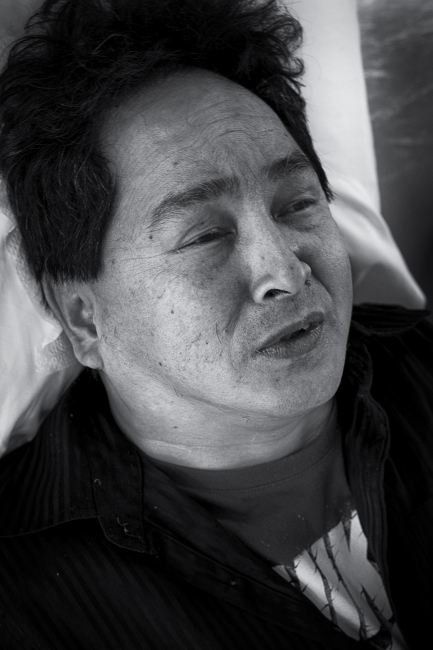 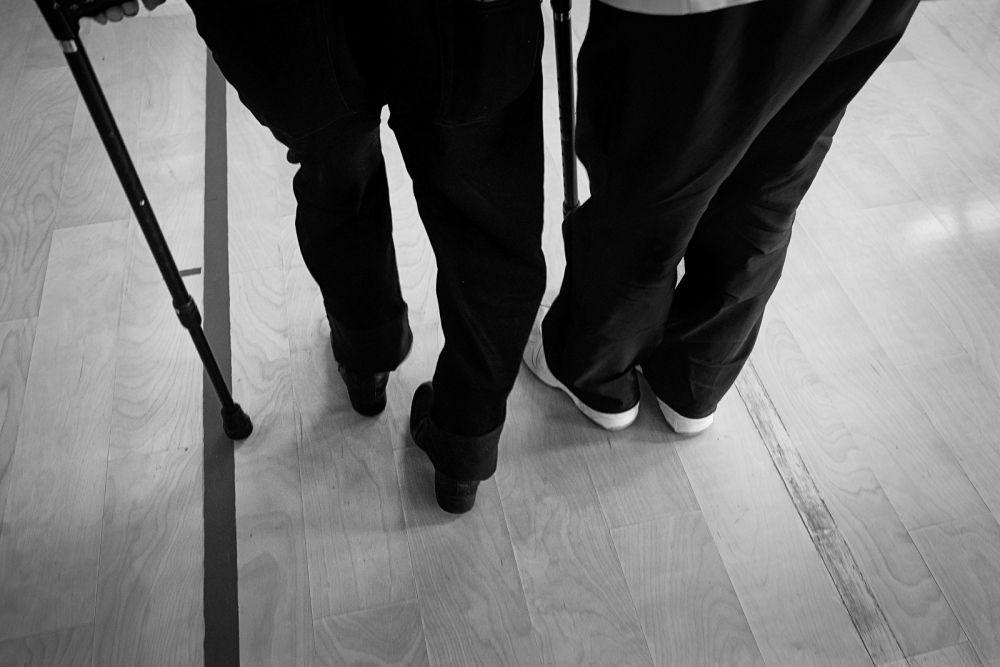 8 of 20 © 2021 Mick Stetson
As the nervous system begins to degenerate, first the limbs grow numb, then motor functions are disturbed, making it difficult to walk and grasp things. Eventually it impairs speech and the victimâ€™s sensory abilities. 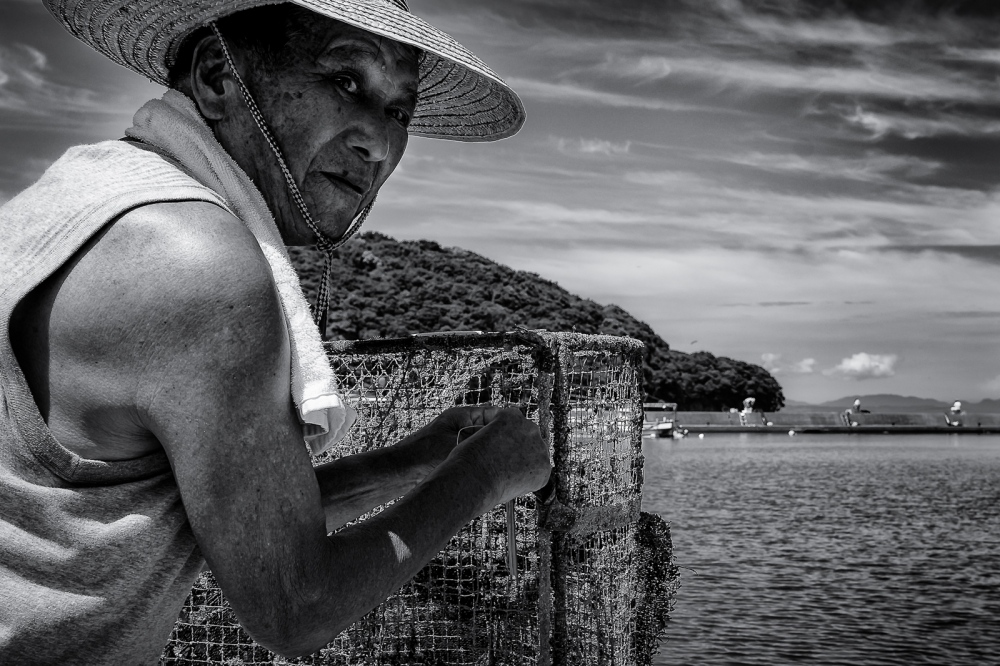 9 of 20 © 2021 Mick Stetson
A retired Chisso employee, Hiromasa Iwasaka spends his time fishing in Fukuro Bay, originally one of most contaminated areas in Minamata. Both his wife and him have Minamata disease. His wife has been hospitalized for a few years, but Hiromasa is still active and shows few of the symptoms that most patients experience. 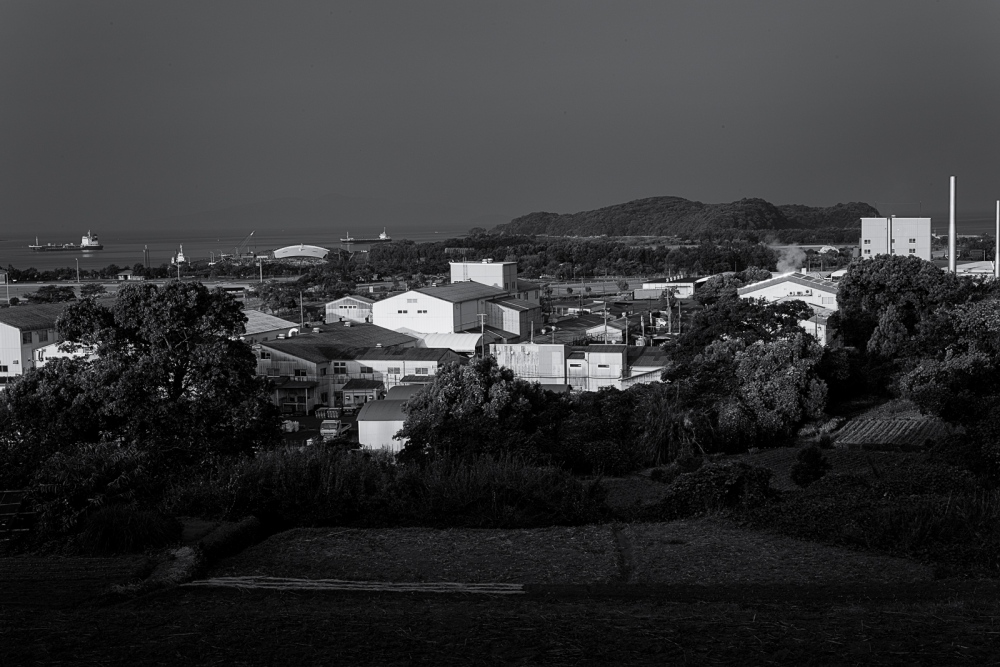 10 of 20 © 2021 Mick Stetson
The original Chisso plant still operates in the Hyakken Harbor area, but under a different name. The government financed the restoration of the harbor, dredging the toxic sludge and burying it under landfill where they built a museum and a park. 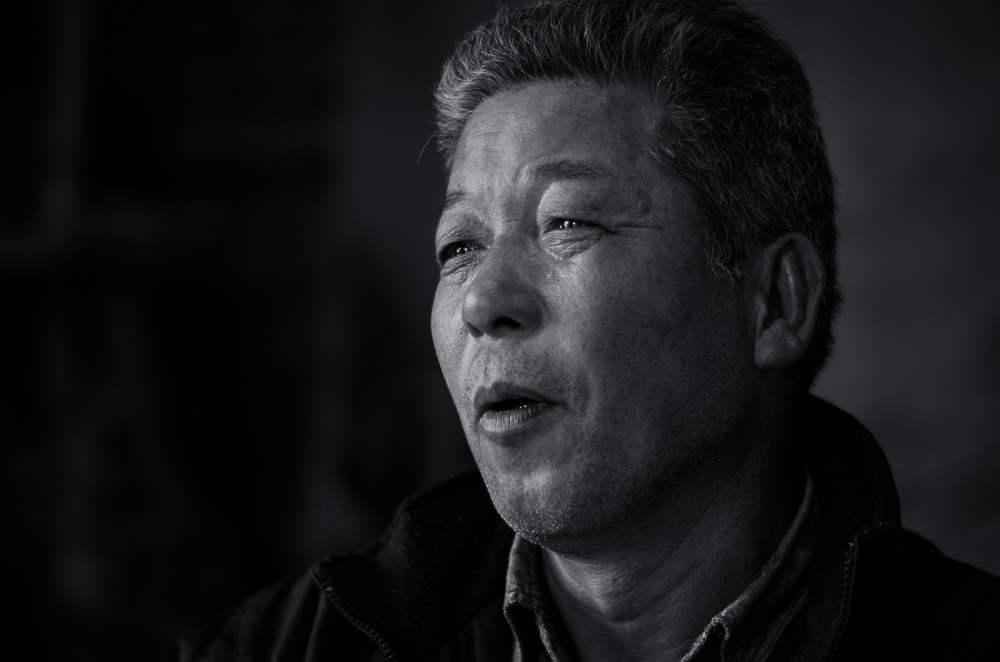 11 of 20 © 2021 Mick Stetson
Masato Ogata was once a leader for the Minamata disease patients who were trying to obtain compensation from the Chisso Corporation in Japan. He is a fisherman and also a victim of the disease â€” one of Minamata's living legacies. 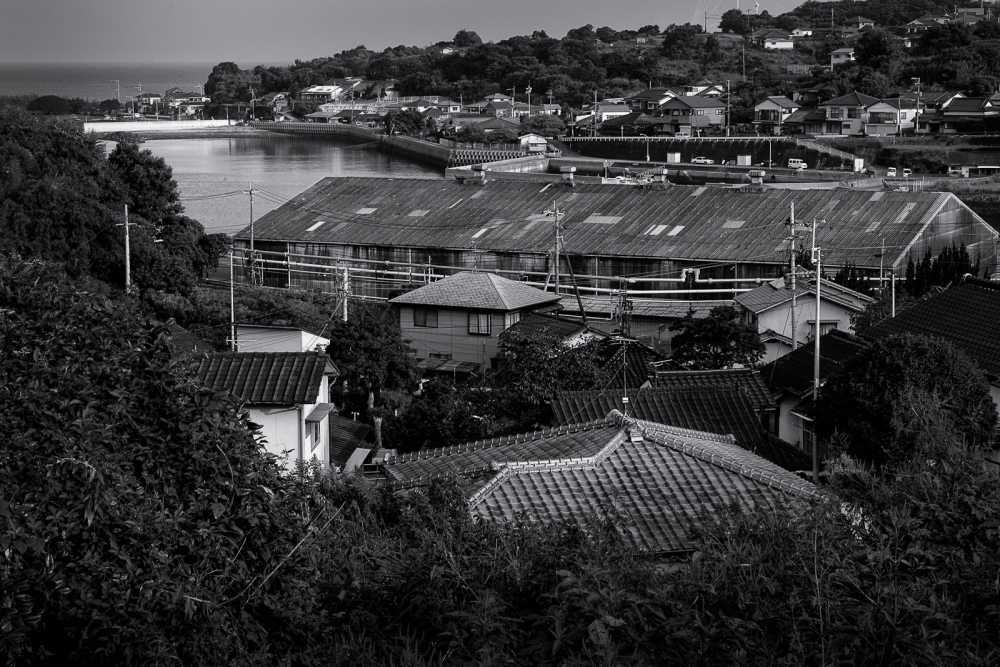 12 of 20 © 2021 Mick Stetson
Umedo port is located directly behind the Chisso factory. In the 1950s, it was Chissoâ€™s main port for shipping products internationally. As the port became congested, the fishing grounds were contaminated, leaving most of its residents ill. Later it was the site where protesting coastal fishers staged a sea blockade. 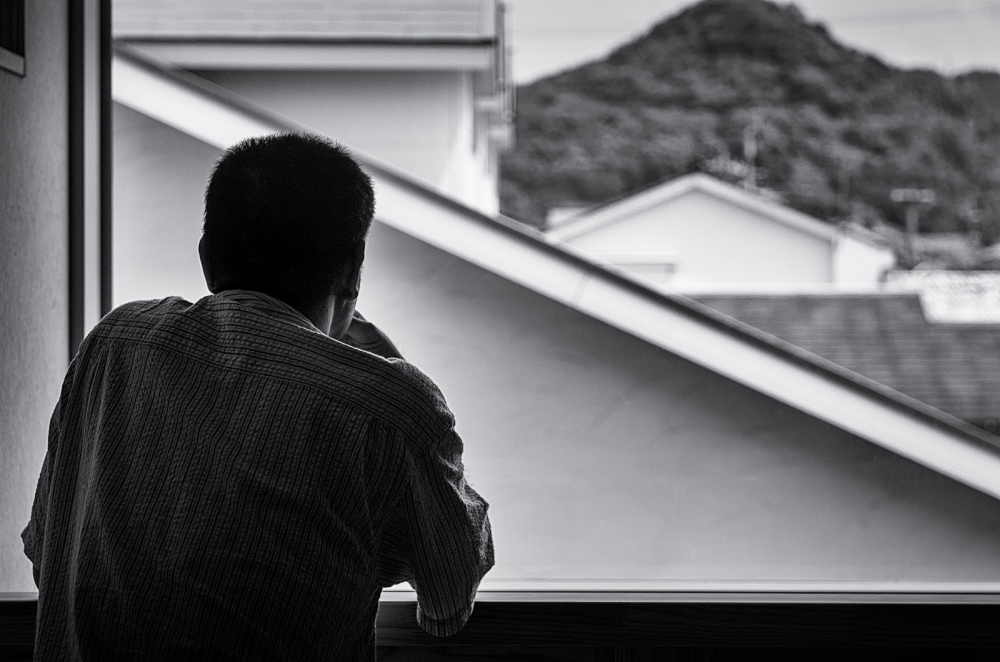 13 of 20 © 2021 Mick Stetson
One of the more progressive rehabilitation centers in Japan is Hot House. It provides vocational training and social interaction for the victims of mercury poisoning. Tomohiro Mizoguchi is an uncertified Minamata disease patient. He watched his mother die from the disease, then became reclusive. It took the director of Hot House 5 years to get him to come to the center. 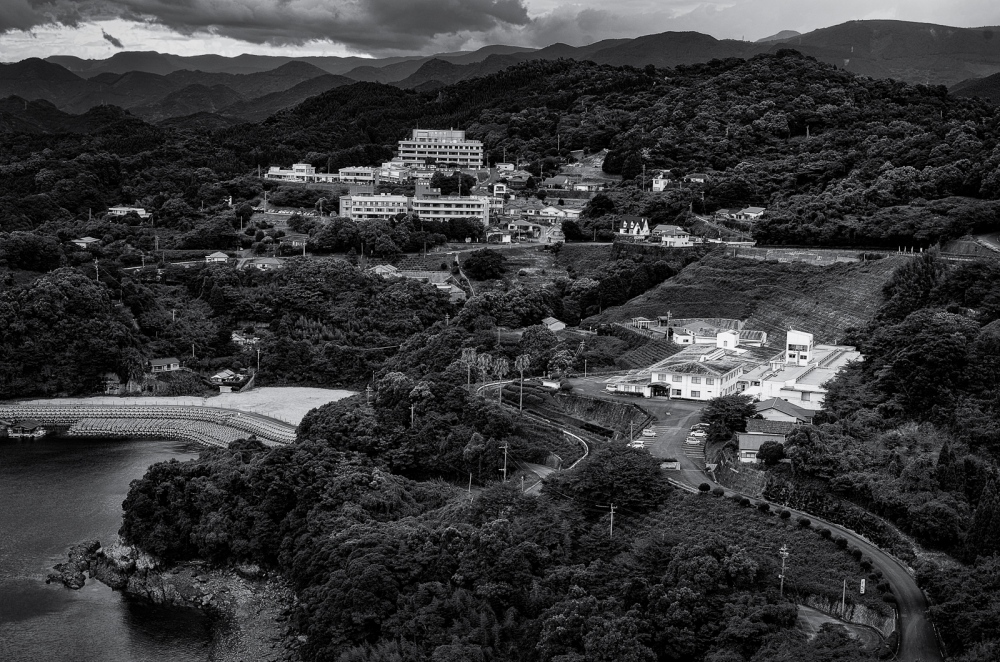 14 of 20 © 2021 Mick Stetson
Hospitals and rehabilitation centers abound in the region. The Meisuien (lower right) is a residential facility for the most extreme cases of congenital Minamata disease. This is where Kiyoko has lived since she was 7 years old. 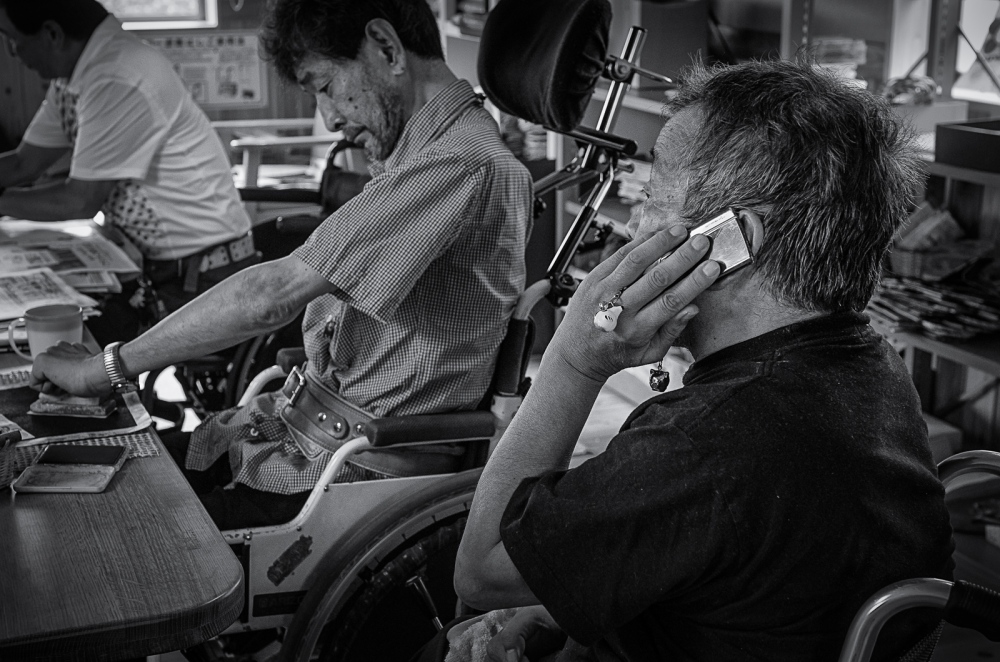 15 of 20 © 2021 Mick Stetson
Minamata disease victims are happy to finally have the opportunity to have a job. At Hot House the patients make business cards, bookmarks and eco-bags from recycled newspaper. It has been a dream for them to have a regular life like everyone else. 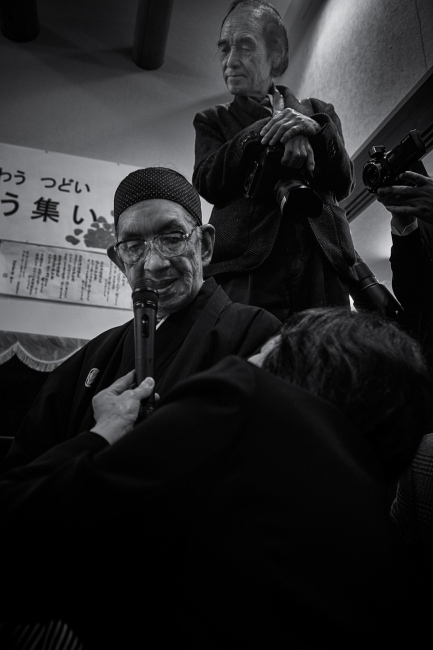 16 of 20 © 2021 Mick Stetson
According to Japanese tradition, a personâ€™s 60th birthday is special. Itâ€™s even more special for Eichi Watanabe because despite his illness, he is still alive and functioning reasonably well. Above him, the photographer Shisei Kuwabara takes a moment to reflect on Eichiâ€™s words, remembering their struggle and how his photographs of these patients in 1960 were among the first that documented the Minamata tragedy. 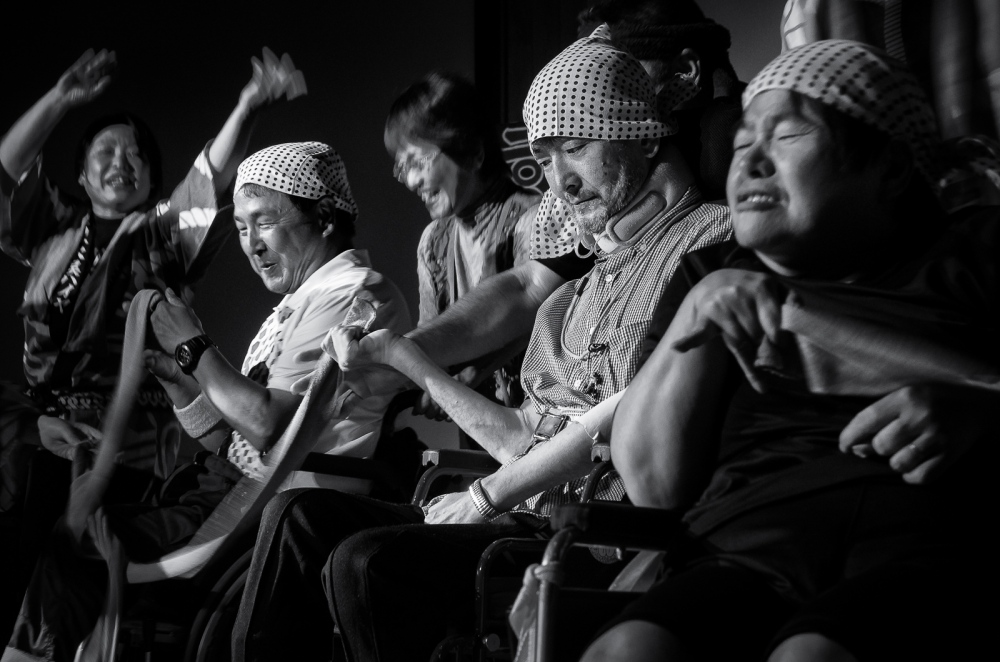 17 of 20 © 2021 Mick Stetson
The fishing folk have an annual tradition for giving thanks for their abundant harvest. Members of Hot House perform this rite along with their caretakers. 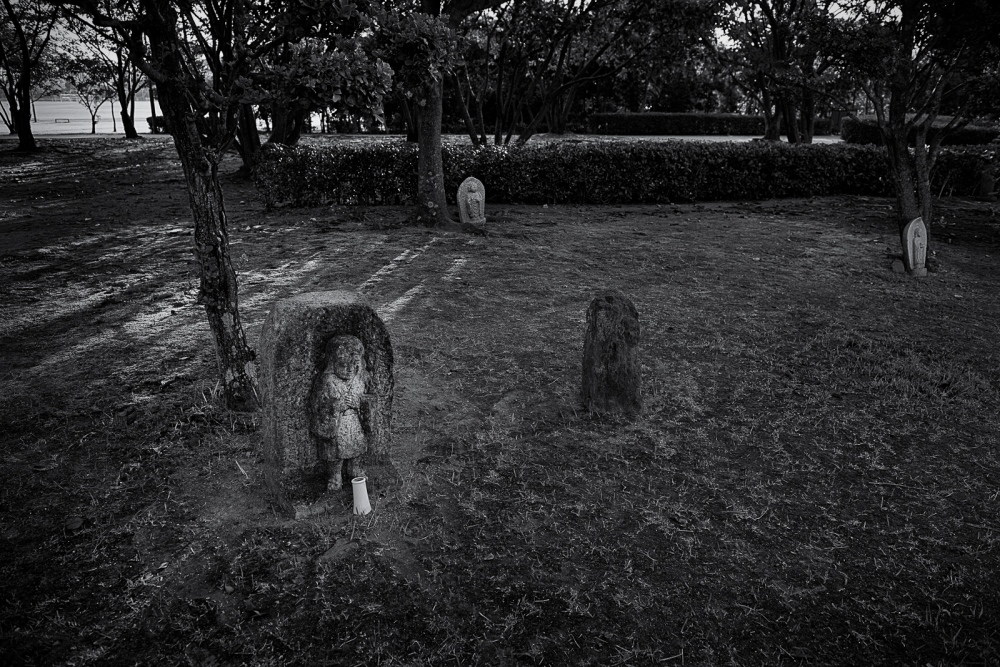 18 of 20 © 2021 Mick Stetson
In the park above the buried toxic sludge, stone statues stand along the shore, reminding those who walk there of the victims that suffered and died from mercury poisoning in Minamata. 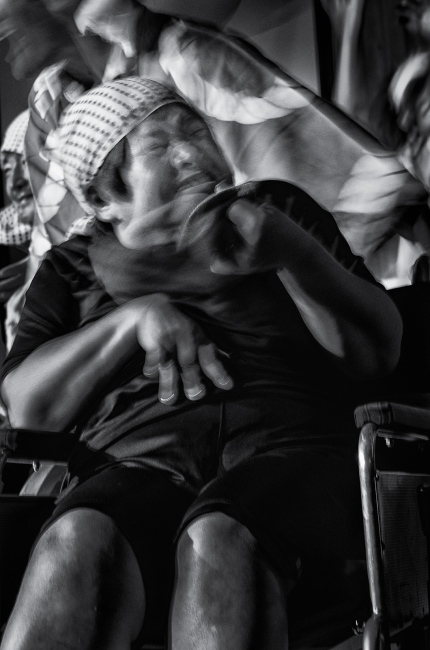 19 of 20 © 2021 Mick Stetson
Kiyoko is ecstatic by the opportunity to show her appreciation for being alive, even though she has been confined to a wheelchair most of her adult life. 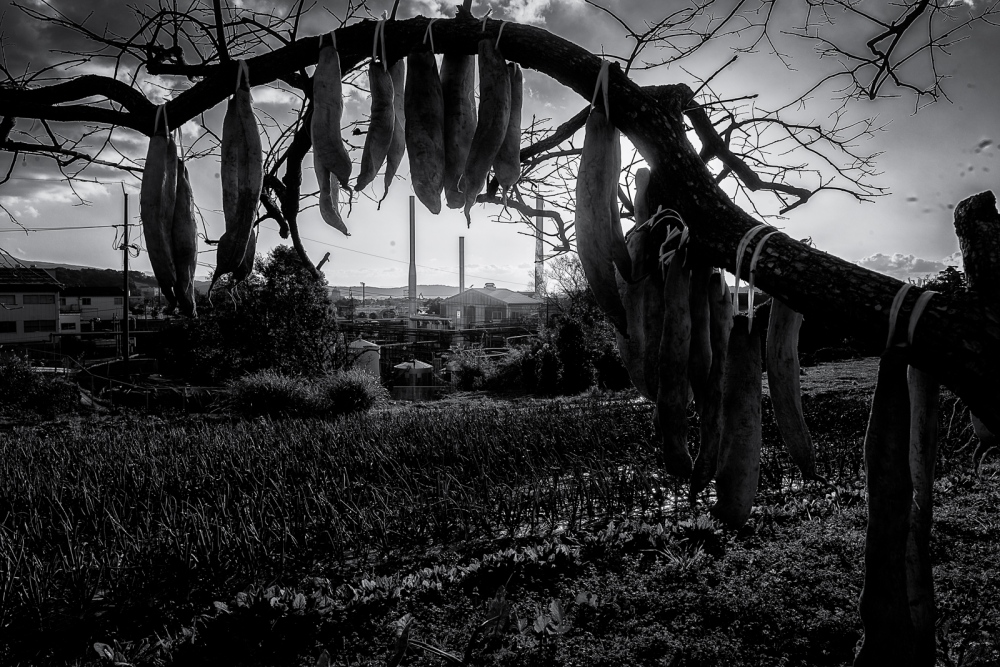 20 of 20 © 2021 Mick Stetson
The economic promise of corporations or the self-reliant spirit of traditional commerce,  itâ€™s a compromise! What will the world choose? The survivors of the Chisso-Minamata disease, Minamataâ€™s living legacy, reminds us that soon we will have to decide.
Public Story
Minamata's Living Legacy
Copyright mick stetson 2021
Date of Work 08/18/12 - Ongoing
Updated 03/05/17
Location Minamata Japna
Archived as Minamata disease

Imagine an enemy, bold and brazen, in front of your eyes, yet hidden. The enemy secretly poisons the sea that feeds you, hides the evidence and continues to flush the sea with its toxins for the next 10 years. The poison? — organic (methyl) mercury which erodes the part of the brain that controls the central nervous system. When it is absorbed through a mother’s placenta, the mother escapes the crippling horrors of mercury poisoning, but the unborn infant carries the brunt of this violence until the day they die.

The 1950s — Most fisher families in Minamata were poor, living in huts crowding the shoreline, eking out a modest living from the Shiranui Sea. Searching the beaches for clams and other edible shellfish was a favorite pastime for local families. The children racing through the shallow water, their screaming, laughing voices declaring what they have found.

Then the rumors began. In the villages around Hyakken Harbor, the cats were dancing, whirling in rapid circles, running head-on into rocks and trees. Eventually they hurled themselves into the sea. Soon after, many kinds of fish were floating, belly-up in the morning sea. The children splashed through the water, catching them in their hands. When they became bored, they ran further down the beach where they saw crows flying, one suddenly drops from the sky into the ocean. As the fish disappeared, the fisher families lost their livelihood, and what little they could glean from the Shiranui Sea became their only food source.

1968 — By the time the government announced that Chisso Corporation’s effluent caused Minamata disease, there were almost 3,000 known victims, and many others who were not yet identified.

The Minamata incident is one of many anthropogenic environmental disasters that have occurred during the past 100 years, Japan’s second — the Fukushima Daiichi nuclear disaster that in many ways resembles the Minamata tragedy. One of the goals of this project is to create a collective memory of the aftermath of this tragic event. To remind the world that without the survivors’ lives as a testimony, unbridled capitalism will continue to make decisions that favor profit, and disregard the impact of their actions on nature and the people who live within it.

In my mind's eye, I see Minamata's Living legacy as a sequel to Eugene and Aileen Smith's internationally renowned, "Minamata." Their work dramatically alerted the world to the dangers of mercury poisoning as well as documenting the victim's struggle with bringing the Chisso Corporation to justice. However, the focus of Minamata's Living Legacy is different and lies within these questions: How will the victims continue to survive in the aftermath? How will they surmount the physical limitations that were imposed on them? Does a monetary compensation resolve or remedy the situation?

I began this project 7 years ago; it is on-going. With additional financial support, I will have the resources necessary to complete this project and accomplish the following:

— To show that although many victims have been recognized and monetarily compensated, their struggle to live day to day is a reminder of the irreparable damage that was imposed on them without their knowledge or consent.

— To show the repercussions of this event within the community as a whole & the impact of it on all its members — victims, caregivers, Chisso employees, other community members.

— To conduct in-depth interviews of community members for an interactive website (Japanese & English) that functions as an extension of the book project;

—To publish a book & a multimedia piece, documenting the tragedy's aftermath.

Portrait of an Enemy

By Mick Stetson / Vietnam, Hoi an — Who is your enemy? By which conditions or circumstances is this determined and by whose decree, spoken or..
Mar 5, 2017