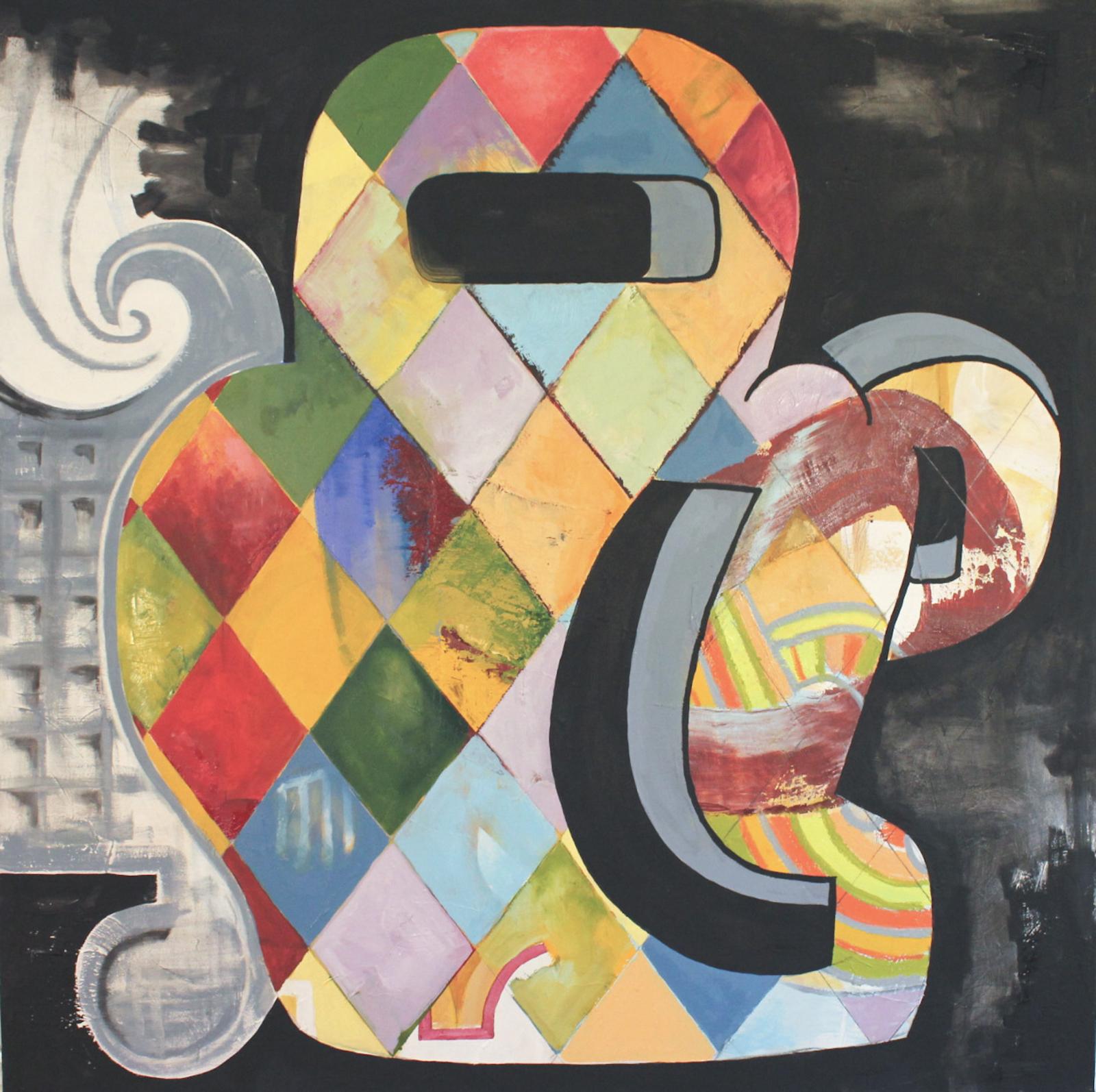 1 of 1 © 2020 Sophie Brechu-West
Brian Fekete, "Fat Tuesday Hurricane," 2019, oil on canvas, 40 x 40 in.
events News
"QUIXOTICA: New Paintings by Brian Fekete"
sophie brechu-west
Sep 27, 2019
571 Projects is pleased to present QUIXOTICA, an exhibition of 5 powerful large scale oil paintings on canvas by accomplished painter Brian Fekete that constitute an ongoing exploration of abstraction, gesture and color.  This is his second exhibition with the gallery, and first solo show in Vermont.  On a quest for new visual vocabulary and fresh challenges as a colorist, Fekete has returned to his roots as a gestural painter in oils.  All executed in 2019, these paintings take their cues from the artist’s internal states, while motifs allude to recognizable elements of the physical world: architecture, playing card suits, and shadowing.  The exhibition will be on view from September 20 through December 20, 2019 at 571 Projects, 56 Park Street, Stowe, Vermont. The artist will be present at the opening reception on September 20, 5-7pm, and will give a brief talk at 6pm.
Rooted in the character of Cervantes’ hero Don Quixote, “quixotic” is defined as an impractical pursuit of ideals.  In this exhibition, Fekete brings his intrinsic curiosity to an unrelenting quest for truth and meaning through expressively painted abstract forms, anchored through their titles in a kind of physical reality.  This visual vocabulary is expressed in organic shapes, as in the colorful geometric harlequin patterning in Fat Tuesday Hurricane (2019, oil on canvas, 40 x 40 inches) or in the cellular structures in Vinifera (2019, oil on canvas, 40 x 40 inches).  At times, a kind of mysticism holds forth, as in the strangely symbolic Dutch Motor Series, four paintings which relate to one another with imagery of card suits that create the shape of a windmill - the “Dutch motor.”  His process often leads him to create sophisticated backgrounds against which to contrast a layering of shapes and expressive actions, as with Country Life (2019, oil on canvas, 40 x 40 inches), where painterly streaks of blues, yellow, gray and dashes of green on the left side of the canvas push forward the hard edged planes of deep blue outlined in apple green, so that it appears to float above.  This optical illusion of dimensionality is heightened by Fekete’s careful shadowing of these elements.  The fresh palette of blues, reds, pale greens, grays and creams suggest nature: one can almost feel the breeze, and puffy white clouds scudding across an azure sky.  This selection of paintings recalls hallmarks of Fekete’s earlier work: an otherworldliness, an idealism and an eagerness that here, takes him in seemingly divergent directions.  On closer inspection though, careful technicality and gestural motifs create a through-line which brings the works firmly together.
Now settled and working in Kingston, NY, Brian Fekete reached the Hudson Valley by way of Brooklyn and Detroit, where he was born in 1955. There, he received his BFA and MFA degrees, before moving to Brooklyn in 1997. Fekete has been awarded fellowships from the National Endowment for the Arts, Wayne State University, and grants from the Michigan Council for the Arts. His work can be seen in the collection of the Detroit Institute of Arts, as well as numerous public and private collections, both in the US and abroad.
Click the link to view more images from this exhibition.

QUIXOTICA | 20 September - 20 December 2019
571 Projects is pleased to present QUIXOTICA , an exhibition of 5 powerful large scale oil paintings on canvas by accomplished painter Brian Fekete that constitute an ongoing exploration of abstraction, gesture and color. This is his second...

Worlds Within: Works on Paper by Matilde Alessandra & Brian Fekete

By Sophie Brechu-West — 571 Projects is pleased to announce Worlds Within: Works on Paper by Matilde Alessandra & Brian Fekete , an online exclusive exhibition...
May 2, 2019

By Sophie Brechu-West — 571 Projects is pleased to announce Storylines: Works on Paper by Sally Gil and Jimmie James .  This exhibition sets up a dialogue between..
Apr 4, 2019

By Sophie Brechu-West — 571 Projects is pleased to announce visions , an exhibition of mixed media monoprints, emulsion transfers and lenticular prints by accomplished..
Jul 26, 2018

By Sophie Brechu-West — 571 Projects is pleased to present beyond all walking , an exhibition of new and recent mixed media paintings on canvas, linen and paper by..
Aug 9, 2017

By Sophie Brechu-West — In our first collaboration with The Helen Day Art Center , 571 Projects is pleased to announce Intergalactic Current , an exhibition of collaged..
Sep 1, 2016

Sally Gil: Out of This World

By Sophie Brechu-West — In our first collaboration with The Bennington Museum , 571 Projects is pleased to announce, Out of This World , an exhibition curated by Sophie..
Apr 28, 2016