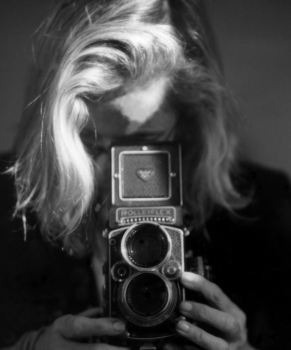 She has exhibited widely including over 40 solo shows at institutions such as the Griffin Museum of Photography, the Santa Barbara Museum of Art, the Fort Collins Museum of Contemporary Art, the San Jose Art Museum, the Shanghai, Lishui, and Pingyqo Festivals in China, The Rayko Photo Center in San Francisco, the Center of Fine Art Photography in Colorado, the Tagomago Gallery in Barcelona and Paris, and the Verve Gallery in Santa Fe. In addition, her work is held in a number of public collections and her photographs have been featured in publications including The New York Times, The New Yorker, PDN, Communication Arts, Eyemazing, Real Simple, Los Angeles, Visura, Shots, Pozytyw, and Silvershotz magazines.

In 2007, Aline founded LENSCRATCH, a photography journal that celebrates a different contemporary photographer each day. She has been the Gallery Editor for Light Leaks Magazine, a contributing writer for Diffusion, Don’t Take Pictures, Lucida, and F Stop Magazines, has written book reviews for photo-eye, and has provided the forewords for artist’s books by Tom Chambers, Meg Griffiths, Flash Forward 12, Robert Rutoed, Nancy Baron, among others. Aline has curated and jurored exhibitions for a number of galleries, organizations, and on-line magazines, including Review Santa Fe, Critical Mass, Flash Forward, and the Griffin Museum. In addition, she is a reviewer and educator at many photo festivals across the United States. Aline has been teaching at the Los Angeles Center of Photography since 2001.

In 2012, Aline received the Rising Star Award through the Griffin Museum of Photography for her contributions to the photographic community. In 2014 and 2019, Aline’s work was selected for Critical Mass Top 50 and she received the Excellence in Teaching Award from CENTER. In 2015, the Magenta Foundation published her first significant monograph, Self & Others: Portrait as Autobiography. In 2016, the Smithsonian Air and Space Museum commissioned Aline to a series of portraits for the upcoming Faces of Our Planet Exhibition and in 2018 and 2019, Aline was a finalist in the Taylor Wessing Photographic Portrait Prize and is exhibiting at the National Portrait Gallery, London. She was commissioned to create the book, LOST: Los Angeles for Kris Graves Projects which released in 2019. Her books are in the collections of the Getty Museum, the Los Angeles Contemporary Art Museum, the National Portrait Gallery, London, the Metropolitan Museum, the Guggenheim, among others. With the exception of her cell phone, she only shoots film.