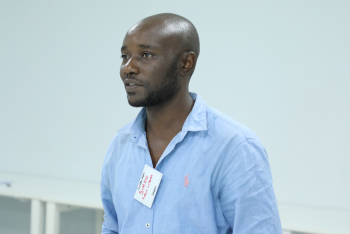 Coverage Regions: Africa
Languages Spoken: English, Swahili
Years of experience: 6 to 10
Simon Fidelis Luyenga is a Tanzanian born independent photojournalist and documentary photographer; his work has been featured in publications including Suddeutsche Zeitung, Mail & Guardian, Die Zeit, Rinse and exhibited in Galleries. In 2018 he was awarded a honourable mention in East Africa Photography Award, by Uganda Press Photo Award in Kampala, Uganda. 2015 he was commissioned in an exhibition “Now you see me now you don’t” at the Grand Cinema in Mannheim Germany.. And 2019 at Kigali Center for photography by Foundry Photojournalism in partnership with VII Academy.

His approach to photography express in depth his fascination of social responsibility, to development and improvement of the society where there is something remarkably challenging. His interest in photography started when working in a gallery, with The Goethe Institut Johannesburg’ since then he has been fascinated with the rhetoric of the images, using his creativity to explore the human condition and the world around him. This extends to his interest in theory, documentary and photojournalism.

Luyenga attended Photojournalism and Documentary Photography Program at The Market Photo Workshop in Johannesburg. And participated in various Photography workshop including Canon Central Africa Training, Foundry Photojournalism Workshop in Kigali by VII Academy, Noor Images Photography Workshop in Dar es salaam, and is also a member of World Press Photo’s African Photojournalism Database (APJD) He believes photography is about the concept and passion; all of his work has a reason, whether to inform, illuminates the cause, make a statement, discuss or argue - but always to provoke a reaction.

Luyenga is currently based in Dar es Salaam, Tanzania: working in independent projects and Agence France Presse (AFP) stringer. His intention is to use photography as medium of expression to enlighten problems in a society, hoping in advance to bring about social change.