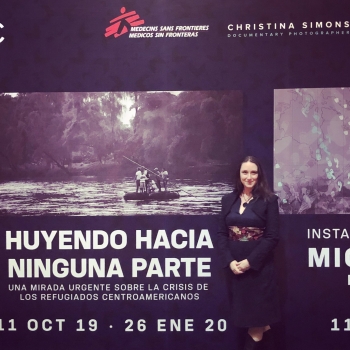 Documentary photographer based in Australia

Christina Simons is an award winning international documentary photographer focused on human rights and civil liberties. Her work is driven by the exploration of sub-cultures and marginalised people, leading to exhibitions throughout... read on
www.christinasimons.com

Part Icelandic & American, she resides in Australia as a true citizen of the world speaking multiple languages. Having worked in the visual arts industry for over twenty years she is a technical master of imagery. Her work traverses many interests including travel, lifestyle and portraiture and is represented in publications such as The New York Times and The Guardian UK as well as working with several NGOs including Medicines Sans Frontieres and UNICEF.

Her passion for human rights and civil liberties have led to series such as “The Haiti Project” on children in domestic servitude, Women’s health in the Philippines and Aboriginal Education in Australia; not to mention her multi-award winning and shortlisted series “Running to Nowhere” on Central American Refugees and “Resilient: Women of Honduras.”

With a passion for justice and compulsion to observe Christina Simons provides key commentary into the unknown issues, places and aspects of this world.