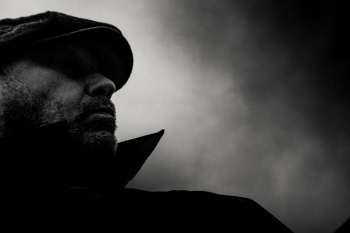 Born in Claverham, England—Simon Andrew MacArthur is a documentary photographer whose work is focused on visually interpreting the world through an environmental lens.  In 1984, Simon completed a BA in Documentary Photography from The... read on
www.behance.com/sama3033
About

Born in Claverham, England—Simon Andrew MacArthur is a documentary photographer whose work is focused on visually interpreting the world through an environmental lens.  In 1984, Simon completed a BA in Documentary Photography from The Gwent College of Art & Design in Newport, Wales, UK. Soon thereafter, he began what transpired into a successful career working as an advertising, commercial and editorial photographer working for magazines such as Conde Nast, Golf Digest, Hello, The Guardian, Soap Opera Digest, Court TV and many others.

I'm often asked why I don't shoot in colour. Why do I shoot solely in monochrome? The answer is because I want my work stripped bare of everything but cause and emotion. I believe the feelings I had when taking the photo come through much more readily in black and white - the “why” of what made me stop and think this moment worth capturing in the first place. Even more specifically, I'm a wide-angle, monochrome photographer which I realize sounds incredibly confining but I've actually found it to be the reverse. At a certain point, I realized the full spectrum was getting in the way of what I wanted to get across. As an emotive human being, I need to feel what I'm shooting, to feel as though I'm almost an integral part of everything I shoot. If I'm on the end of a telephoto lens, three hundred feet from my subject, I'm not feeling anything. I need to be in your face and, ideally, interacting with my subject, in their skin.

So, what am I; what do I call myself? It's a question we've all struggled with at one time or another. Define yourself. Distil what you are, concisely. Clearly, I'm not your typical documentarian but something of a hybrid. I have passionately-held beliefs and these are an intrinsic part of my work. This is the only way I know of that allows my audience to experience the same emotions I felt when I took the picture. My hope is to immerse my audience in those same emotions I had at that moment.

Underlying everything is a deep appreciation for nature, mingled with my own internal politics and with an insatiable curiosity about how the world works in all its spell-binding intricacy. I grew up, deep in the English countryside, surrounded by lush, green land and countless acres of wilderness to walk through.

The late Irving Penn, who I revered almost above all other photographers, once said, “I can become obsessed with anything if I stare at it long enough. It’s the curse of being a photographer.” I think I know what he meant; I can gain inordinate pleasure just from observing - almost anything. I guess I’m a born voyeur. Seeing is everything in my world. The act of observing is an end unto itself.

From the outset, I have looked at photography as a passport into the lives of others, the camera as a tool, a key if you like, prying open doors that are simply closed to the majority of us. I realized that none of us wants to pass through life without having left some record of our time on Earth, proof, however scant, that we had an impact somehow. I think it’s ingrained in our DNA, at a minimum, to leave at least some mark of our passing. It’s this knowledge that I’ve used to gain entry to the people and places I wanted to shoot.

Perhaps most importantly I’ve come to realize that you cannot, must not fear your subject. We can be circumspect about approaching those people we want so badly to capture but then, the fact is, none of us wants to be forgotten. And therein lies the liberating ideal. Now you are granted license to do almost anything you desire, to capture the things you need.

Sticking a camera in someone’s face was the healthiest way I could think of whereby I could interact with the rest of humanity and gain the deeper understanding I was looking for. Once you realize that everyone wants to be remembered, even by a stranger who they may never see again, any trepidation disappears. They want the same thing you do, to verify their existence. I’m incurably nosey, so it seemed obvious to me that photography was the only logical course of life I could follow. I was satisfying two goals at the same time. It was therapy of a kind, forcing myself way, way outside my own comfort zone plus I was gaining those insights I so desperately needed. To that end, I’m always looking around the next corner, constantly haunted by the thought of what I might not see if I don’t look.

I’ve always loved shooting people in their work environments, fully aware that we’re so often defined by what we do. There’s a particular aura around someone doing what they know how to do with consummate ease. I’m not sure if it’s pride made visible but it’s certainly tangible. A future project will deal with the effects that mass automation is having on the working populace; what are we going to do with millions of non-working people as their vocations disappear, taken over by robots? Many will lose their sense of purpose without a viable job. What happens to them?

I am hyper-aware of the effects that mankind’s existence on Earth is having on the environment. I see them everywhere. We have entered the Anthropocene era for better or worse. Simultaneously, we're in the midst of the Sixth Great Extinction, where most of the world's biodiversity will just disappear. Mankind now has an inordinate, largely negative impact on the environment. How we will survive if we carry on polluting both the sea and atmosphere and depleting limited resources is a constant drumbeat in my head and cause for real concern. It seems clear that we are headed for major problems in years to come unless we make radical, as yet unquantified changes. All my engagements with oceanographers and climatologists tell me the years ahead could be very difficult and make me fear for the coming generations.

Much of my own work, going forward, will delve into the gaping chasm between capitalist idealism around infinite, inexhaustible resources and the environment, at how corporations utilize everything, including people, in order to sustain the unending mythic “growth” that seems to drive everything and what effect that will have on our lives.

I am currently crafting the treatment for a wide-ranging project depicting humankind's worst abuses of the environment that will hopefully take me around the world...again.