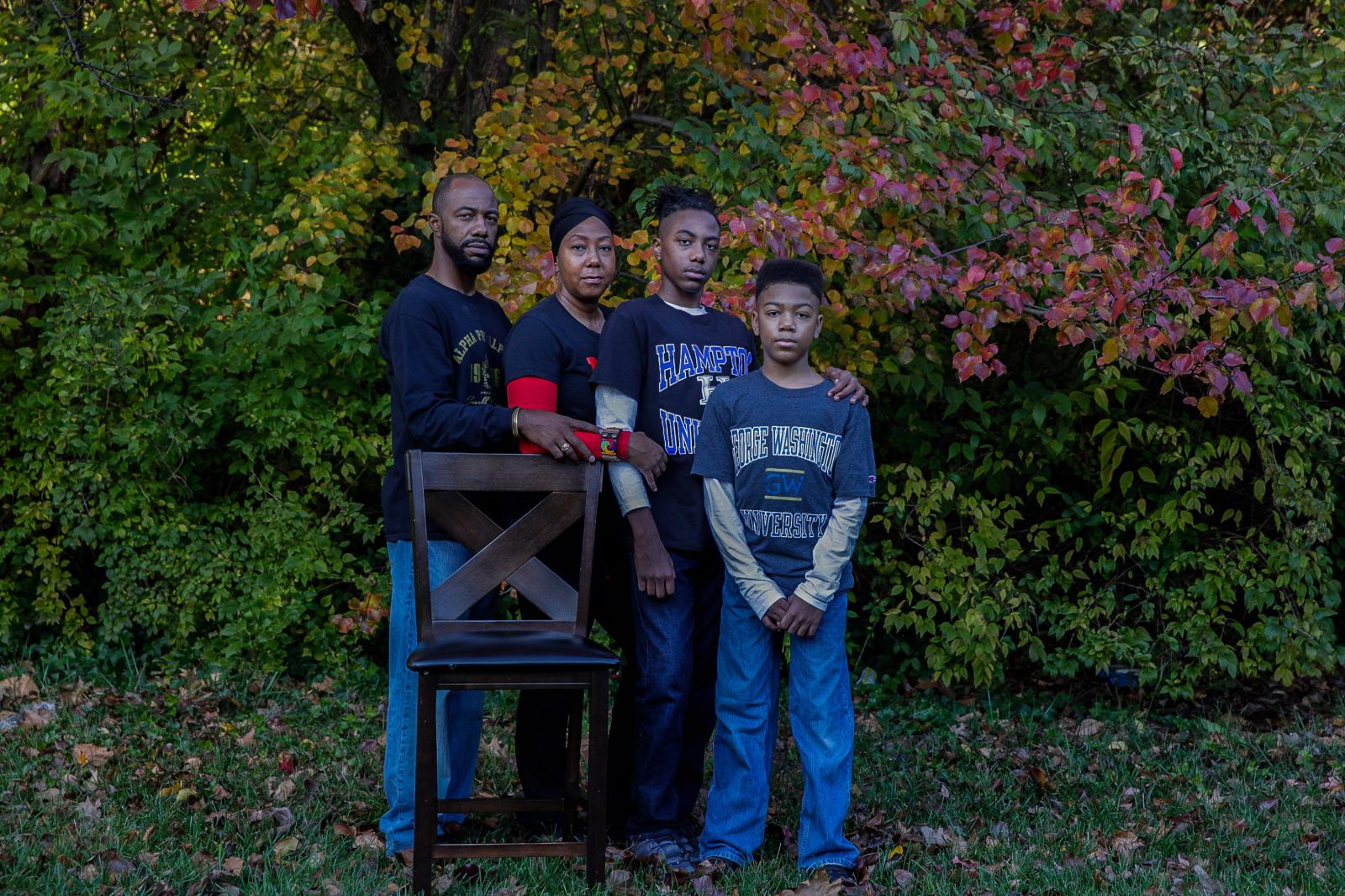 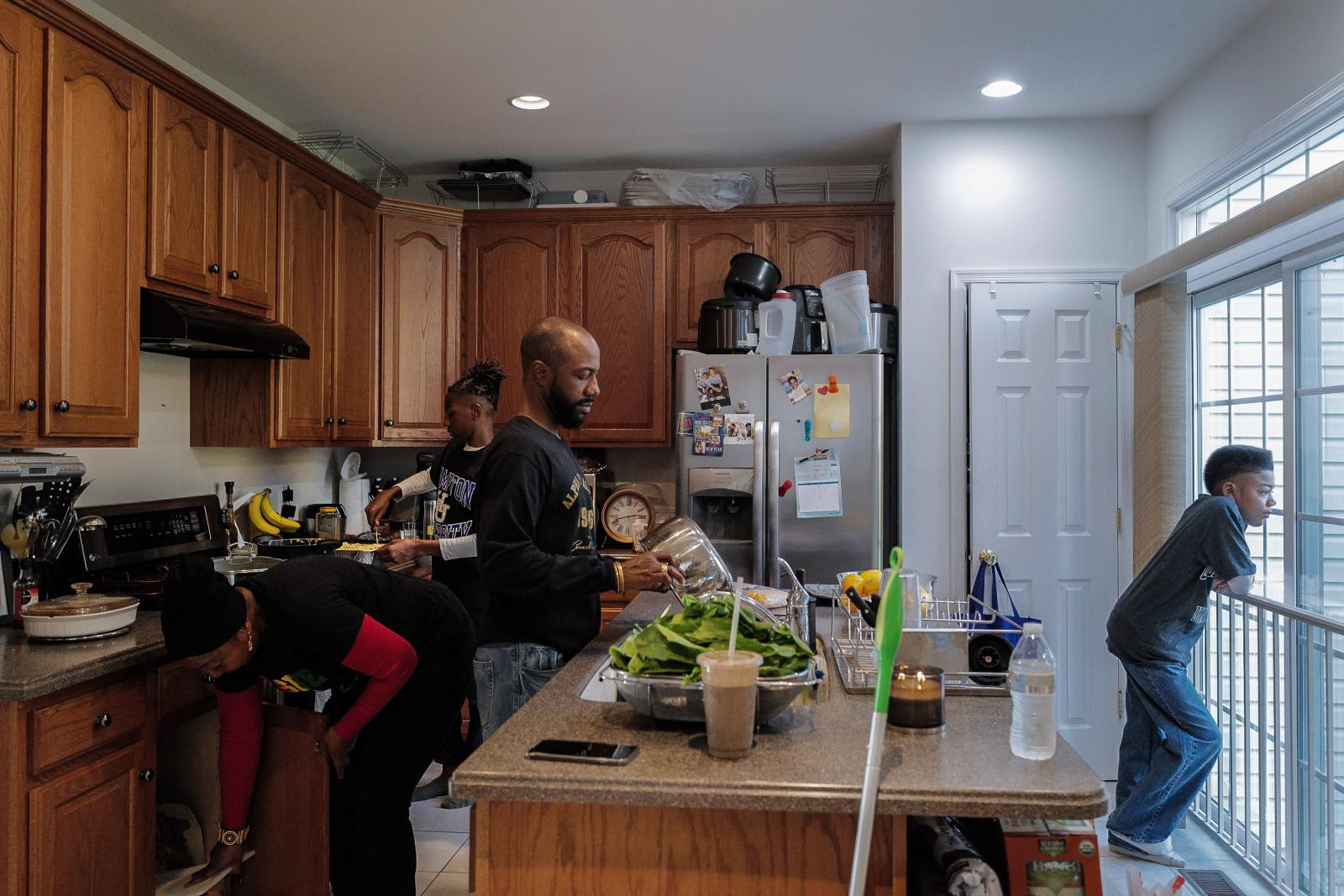 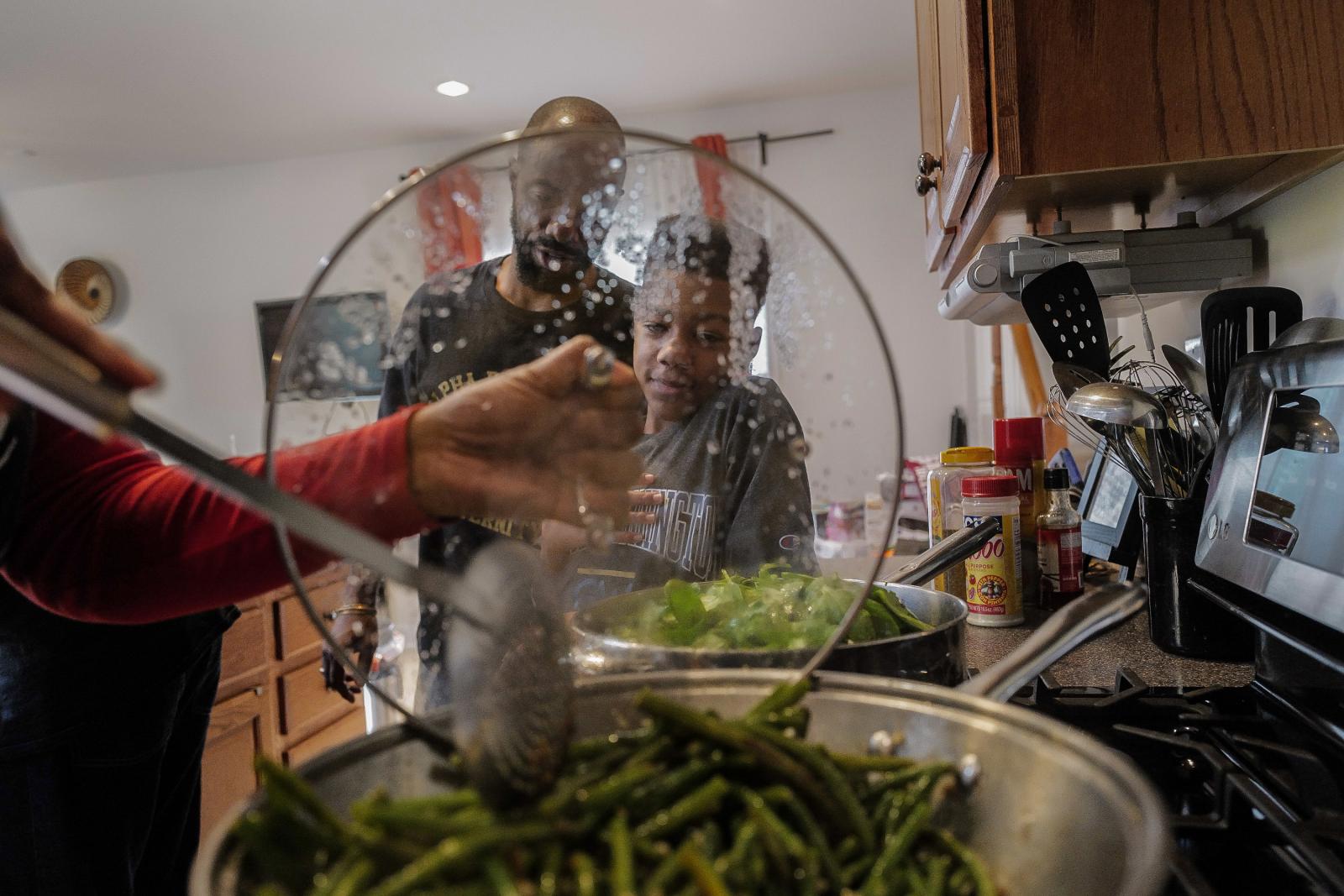 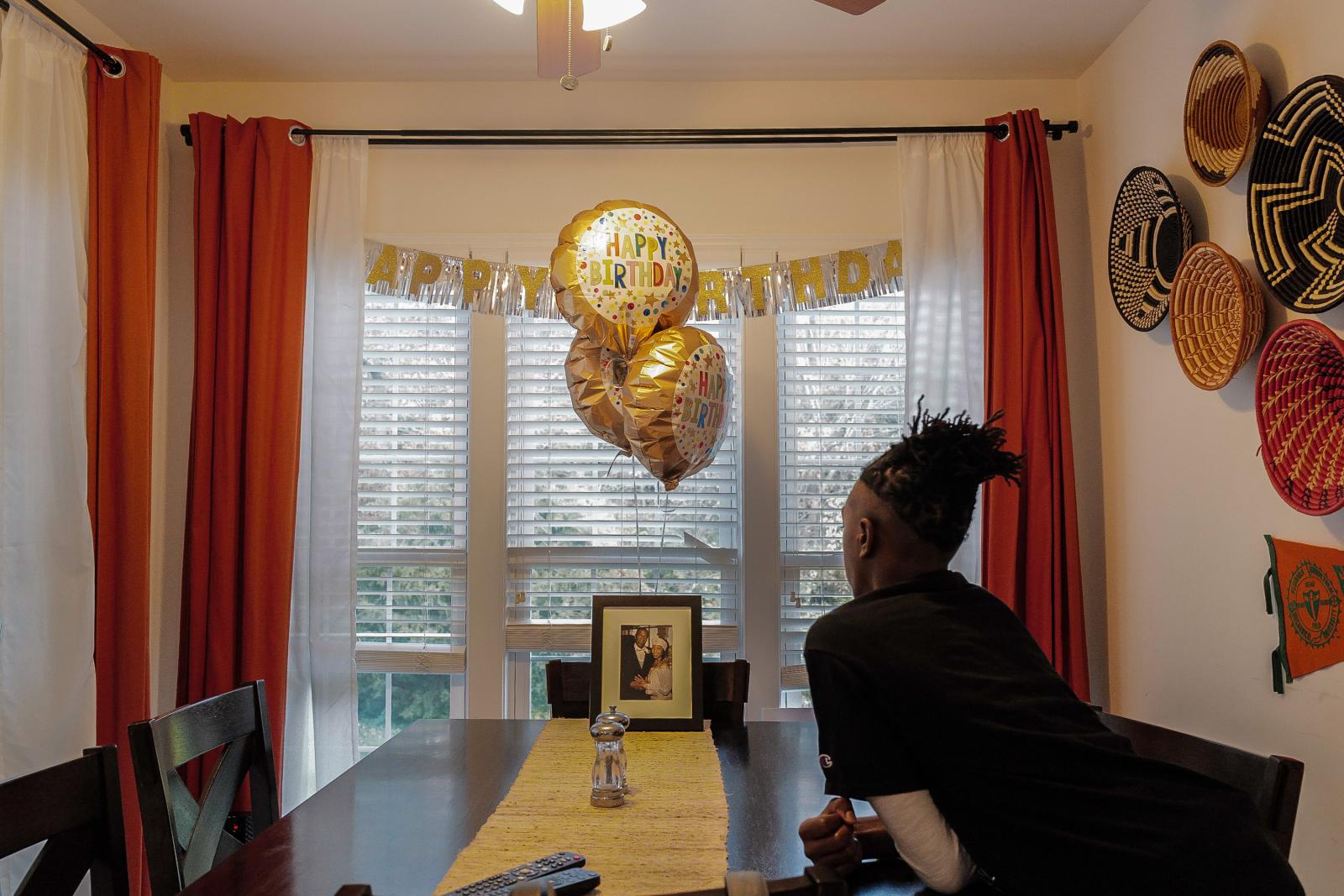 4 of 8 © 2022 Shuran Huang
WASHINGTON, DC - NOVEMBER 26: Corey Lawrence looks at a picture that was taken on Malene Lawrence's wedding while the rest of the family prepares Thanksgiving dinner at their home in Washington, District of Columbia on November 26, 2020. Malene Lawrence lost her father, George Hawkins, on April 2, 2020, to the COVID-19. (Photo by Shuran Huang for The Washington Post) 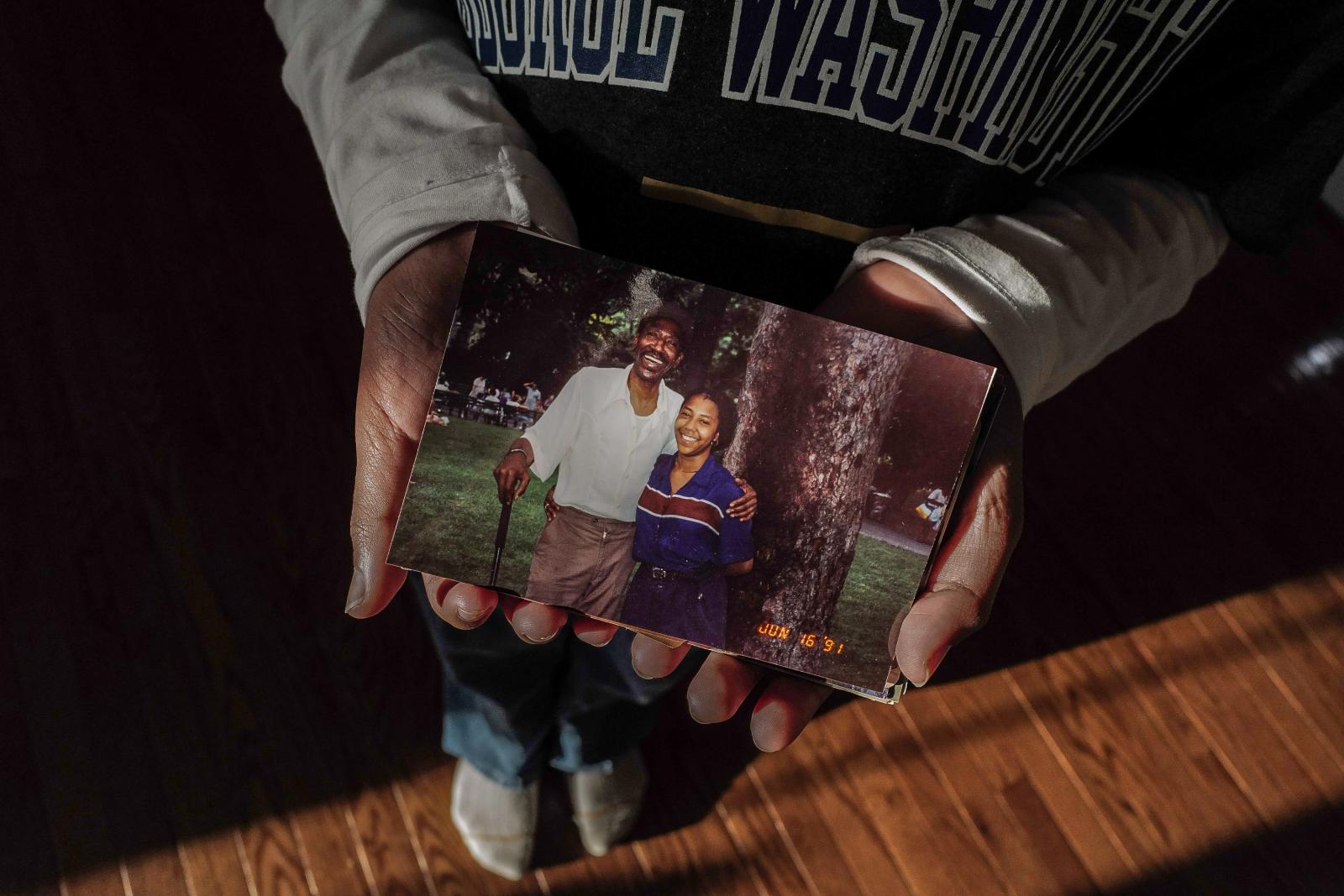 5 of 8 © 2022 Shuran Huang
WASHINGTON, DC - NOVEMBER 26: A photo of George Hawkins and his daughter, Malene Lawrence, in which Lawrence took him to a picnic in Central Park on Father's Day in 1991, is held by Curtis Lawrence III in Washington, District of Columbia on November 26, 2020. (Photo by Shuran Huang for The Washington Post) 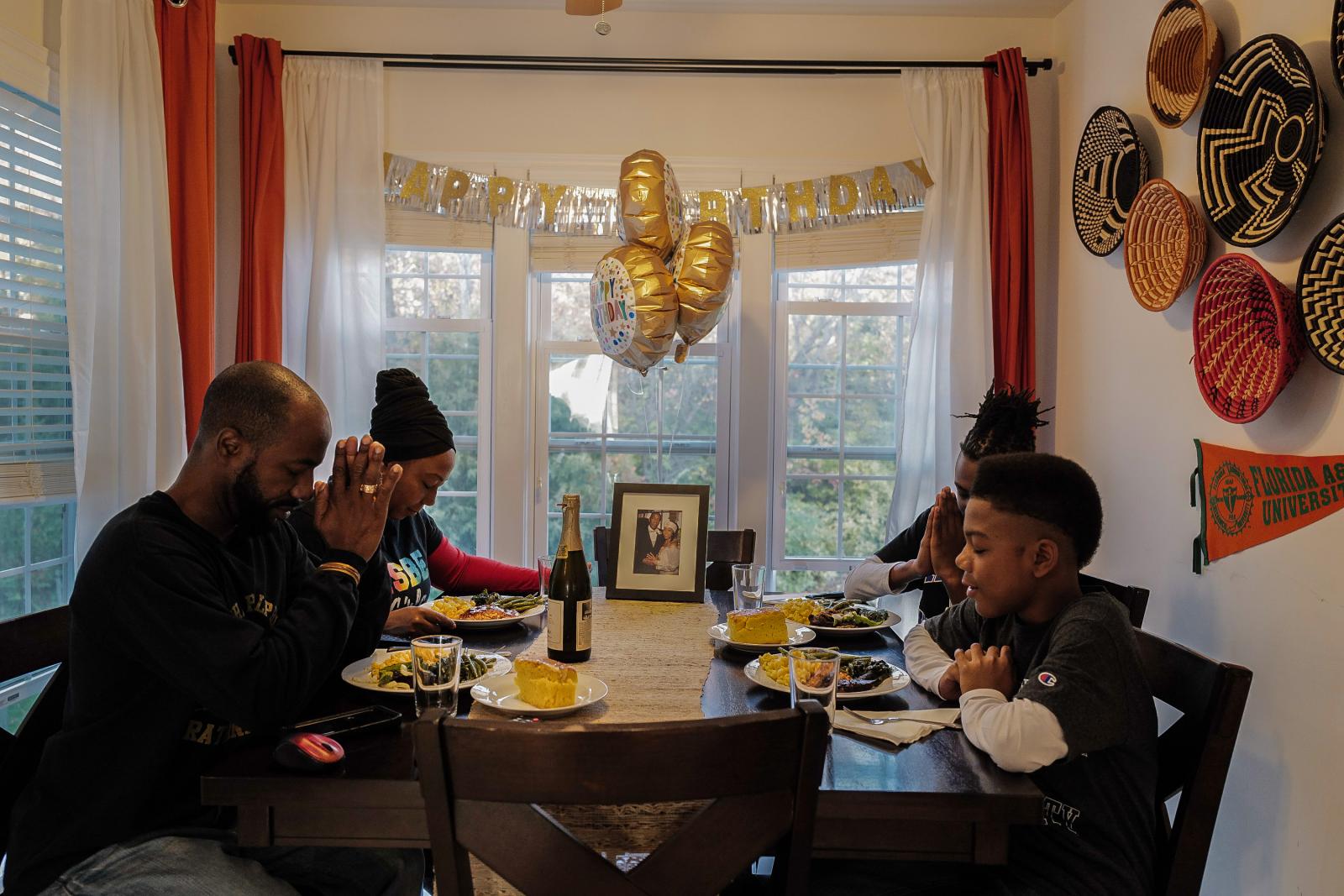 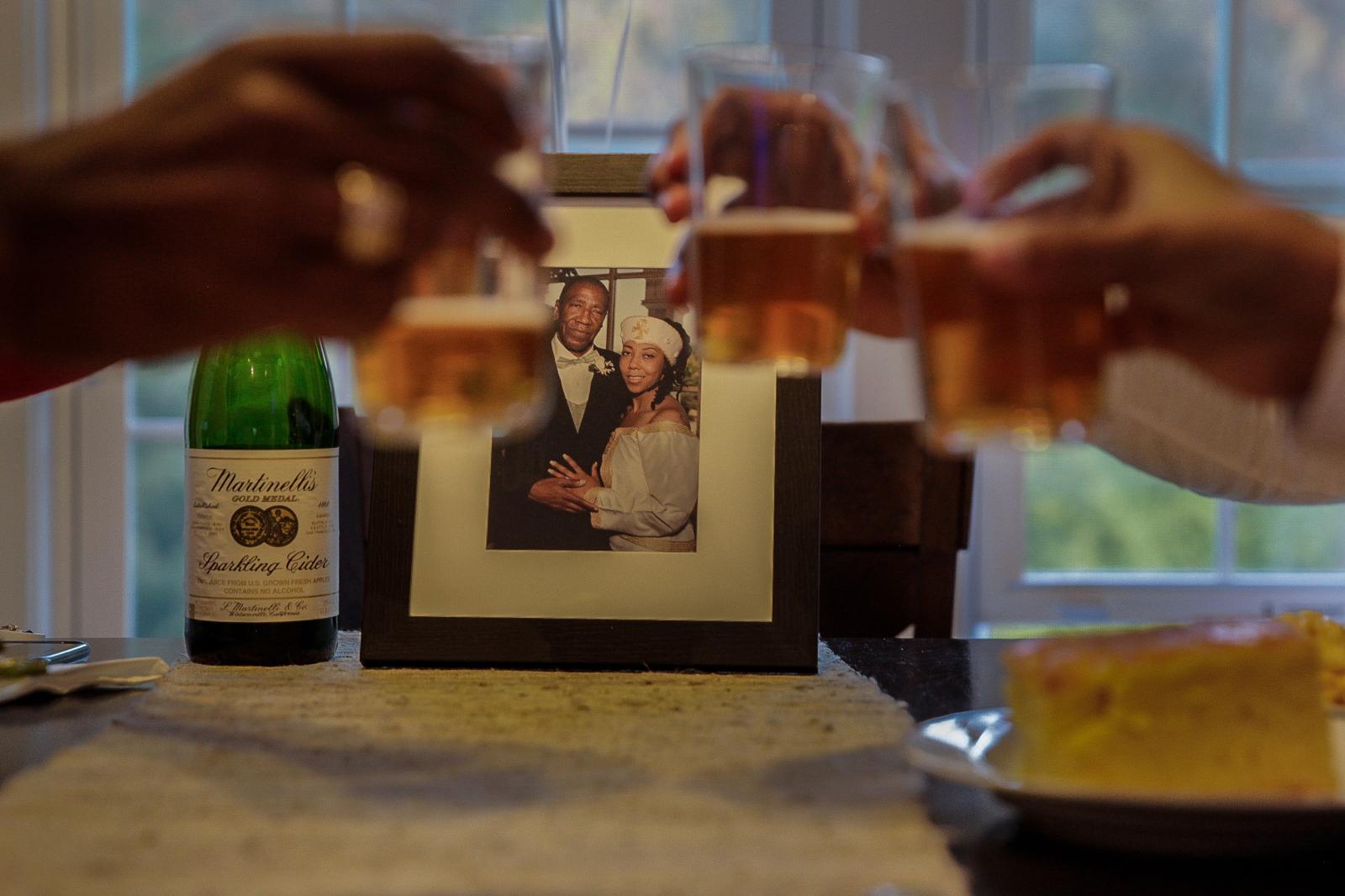 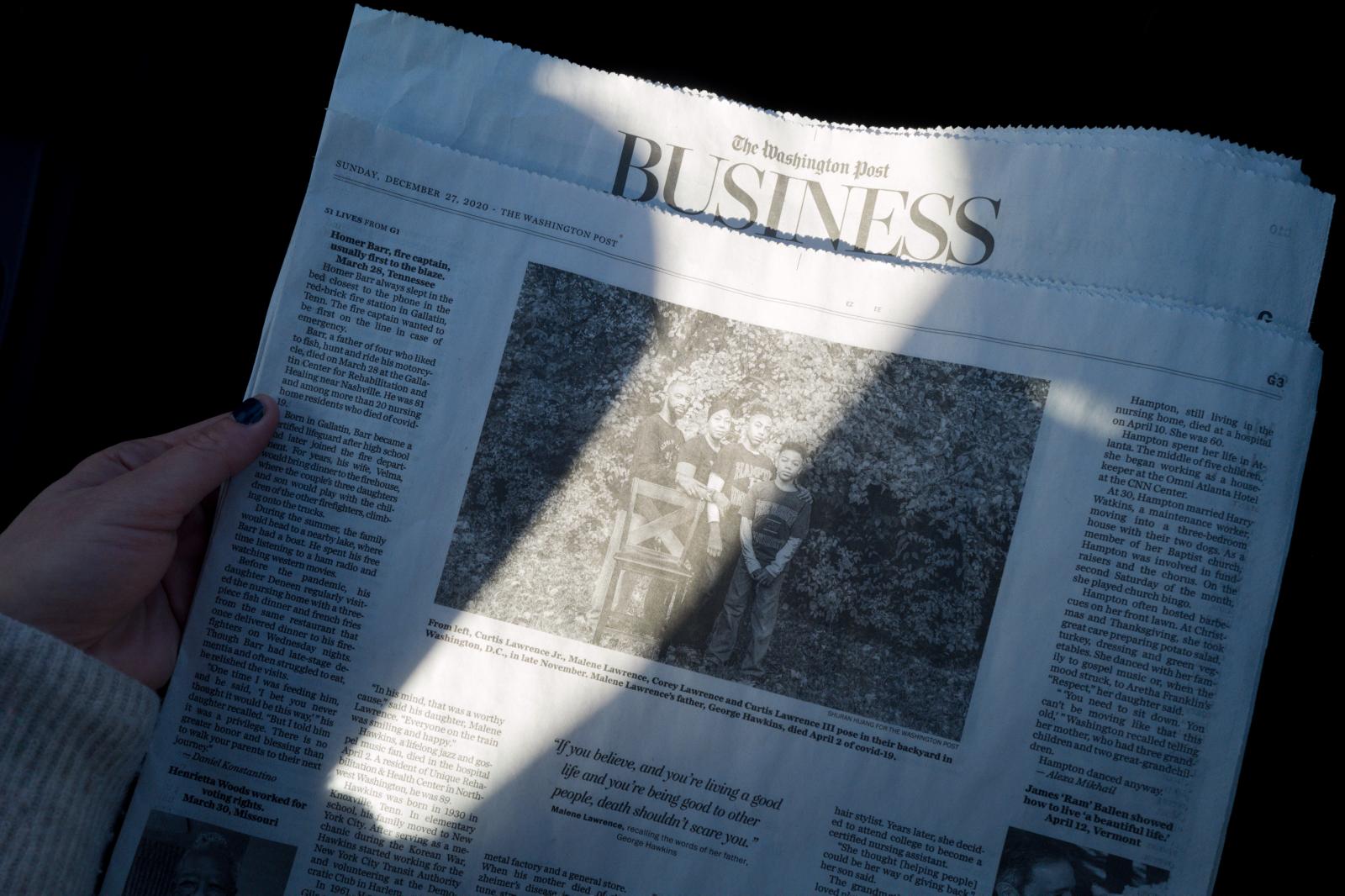 On this year’s Thanksgiving Day, I spent some time with Malene, Curtis Jr., Corey and Curtis III for their first family gathering without Malene’s beloved late father, Mr. George Hawkins. As a resident of Unique Rehabilitation & Health Center in Northwest Washington, George Hawkins died from COVID in April. 2, shortly after the coronavirus began to spread in nursing homes throughout the country. He would have been 90 this October.

Born in 1930 in Knoxville, Tenn., Mr. Hawkins was a conductor for the New York City transit system in the 1950, as the amazing investigative journalist at The Washington Post, Debbie Cenziper, describes as “a lifelong jazz and gospel music fan” who “was once written up for playing a Dizzy Gillespie song over the loudspeakers on the train.”

“The kids would just crack up laughing like, ‘Why is he making fun?’ ” Malene Lawrence said, recalling Mr. Hawkins’ sense of humor. “And I’m just like, ‘That was my dad.’ ”

“Though he was legally blind, Hawkins lived by himself in New York City for about 20 years without ever learning Braille or getting a home attendant or guide dog.” Debbie writes. “When Hawkins was sick and isolated in the hospital, Lawrence asked the staff for permission to play some of her father’s favorite gospel songs over the phone. As he drew his last breath, the music played in the background.”

The story, 51 lost lives: A portrait of the pandemic’s tragic toll in America’s nursing homes, was published on The Washington Post's website. This is part of an ongoing series of stories documenting the devastating toll of covid-19 in America’s nursing homes. It features 51 stories, written in collaboration with Debbie Cenziper by student journalists from Northwestern University’s Medill Investigative Lab and the West Virginia University Reed College of Media. More work is posted on Instagram.

51 lost lives: A portrait of the pandemic’s tragic toll in America’s nursing homes
The 51 residents whose stories are told here, one from every state and the District of Columbia, left behind at least 129 children, 230 grandchildren, 210 great-grandchildren and 41 great-great-grandchildren.

On Bronx Documentary Center: Featured in "Storming of the Capitol" Exhibition

On The Washington Post: Crowds gather around the country to protest anti-Asian violence

On The Washington Post: An innovative Georgetown lab looks to theater to quell political fires

On The Washington Post: Capitalizing on D.C.'s alleys in the real estate picture

On National Geographic: A historic day in photos: from a pro-Trump insurrection to a pre-dawn Biden victory sealed

On National Public Radio: NPR's 40 Most Engaging And Popular Stories Of 2020

On The Washington Post: Woodridge is a quiet corner of Northeast D.C. that is close to all the city has to offer

On Visura: Highlighting Success Stories by Women Visual Storytellers and Journalists in 2020

On The Atlantic: How 12 Asian Americans Are Voting in 1 Swing State

On Washingtonian: Check Out These Dramatic Quarantine Self-Portraits Taken by Professional Photographers

On WAMU: What It Means To Be A Nationals Fan In Washington's World Series Moment

On NPR: Justice Ginsburg: 'I Am Very Much Alive'

On NPR Picture Show: Celebrating The Fourth of July

On NPR: Lonnie Bunch III Takes Helm Of The Smithsonian: 'I Feel The Weight Of History'