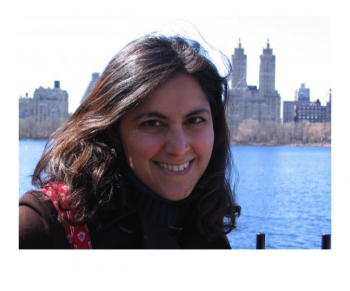 Her July 2012 essay, "Has The Data Revolution Hurt Democracy?" on the rise of the libertarian movement and the plethora of information online reflected how data consumption patterns have altered American political campaigns.

In a May 2013 essay titled, "Policy and Prejudice: Shia Divisionism in Bahrain," she articulated how technology and globalization have weakened strong states and found Bahrain, a Gulf nation with Shia and Sunni constituencies, to be an especially relevant case.

In Oct 2017, Pia experimented with a novel, directed interview format on Medium. She spoke with two Japanese Americans on their personal histories, art and activism, and punctuated the piece with rare photographs, trivia, and anecdotes from the interviewees' personal archives—which date back to World War II. That work is titled, "Then And Now: From Internment Camps to Muslim Bans."

Pia has also produced and directed a few documentaries. She completed a 3-year verité documentary project in 2006 on US Muslims detained and deported by American immigration authorities after 9/11. That 66-minute film titled, OUT OF STATUS, was nominated for the Amnesty DOEN Award for Human Rights during its premiere at the Rotterdam Film Festival. OUT OF STATUS earned grants from the New York State Council on the Arts and Experimental Television, won First Prize for "Outstanding Story" at the South Asian Journalists Convention in 2006 and subsequently aired on Channel 4 TV (UK). The film also screened at film festivals worldwide and on European television stations. It was reviewed in the New York Times, TV Guide, and Variety and had a theatrical run in New York City in August 2007. Pia and her co-producer on that film, Sanjna Singh, were nominated for ABC’s Talent Development Award. Pia has also worked in multimedia communications and human rights.

Her more recent documentary, RWANDA: TAKE TWO, commissioned by the Rotterdam Film Festival, premiered there in January 2010, was reviewed by Variety magazine, and screened in Europe, Asia and Rwanda. The film was a finalist for "Outstanding Story" at the South Asian Journalists Convention in 2011. Watch it online here. For more on the film, check out the Rotterdam Film Festival website. RWANDA: TAKE TWO was also published in its entirety to the Washington Post.

To watch another one of her short films on Brooklyn's gentrifying neighborhoods, see the Mediastorm.org website.

OUT OF STATUS (US, 49 minutes) is now publicly accessible online. Read more about it here. Students, faculty and staff at US universities can also order, view and check out the film in their own institutional libraries or buy it on Amazon here.
Cart
Loading...
Edit Check Out